The Sunland was another of the Seaboard Air Line's secondary trains connecting the Northeast with Florida (in conjunction with the Richmond, Fredericksburg & Potomac and Pennsylvania railroads) offering a year-round schedule.

Unlike most railroads, the Seaboard, and rival Atlantic Coast Line, enjoyed strong patronage for the southbound Floridian services as vacationers continued to utilize these trains (especially during the winter months).

As time passed the train went through a number of name changes but permanently carried the Sunland designation after the late 1940s.  It closely mirrored counterpart Palmland albeit offering a somewhat different consist and through connections while providing a schedule slightly faster.

After World War II the train saw its schedule change and by the late 1950s its standing within the fleet was greatly reduced as the Seaboard cut and economized its passenger services.  It remained on the timetable through the Seaboard Coast Line merger but was gone prior to 1969.

During the early 20th century Seaboard's flagship trains to Florida included the simply named New York-Florida Limited and Southern States Special.   These remained the road's premier services to the Sunshine State until the streamlined era.

Looking for a way to curb growing losses brought on by the Great Depression and attempting to wrest itself permanently from chronic bankruptcy problems Seaboard's receivers turned to the flash and pizazz of the streamliner.

In 1939 it launched the Silver Meteor, the first of its kind in the South, carrying a seven-car stainless-steel consist from the Budd Company led by new Electro-Motive E4 diesels wearing an attractive scheme of Pullman green with yellow, orange, and aluminum/silver trim fondly remembered as the Citrus livery.

The Meteor became an immediate success and spurred other Silver trains including the Silver Star and Silver Comet.  These new streamliners naturally bumped the Special and Limited from their once lofty status, and eventually resulted in their replacement; during late 1941 the former was renamed the Sun Queen and the latter Palmland.

The new trains were still predominantly heavyweight in nature fielding several sleepers, a diner, coaches, and occasionally a lounge.  The Sun Queen was listed as trains #7 and #8 on Seaboard's timetable running a schedule of around 33 hours between New York and Miami with a section reaching Florida's Gulf coast at St. Petersburg.

The Seaboard's management was apparently unhappy with the Sun Queen's name as the train went through a number of name changes after World War II.  The first came in the spring of 1947 when it was referred to as the Camellia.

This brief designation lasted only little more than a year (during which time the train boasted a few lightweight coaches and a lounge) when in late 1948 it was renamed again as the Sunland.

While this latest change resulted in the train losing its new streamlined equipment it continued operating with diesels (Electro-Motive's E7 model) as far south as Wildwood until 1950 when steam had largely been retired from passenger service.

Throughout the first half of that decade the Sunland witnessed various operational changes from the lost, and then regained, Miami connection to truncated dining service only between Washington and Hamlet, North Carolina (south of that point a diner-parlor was employed). 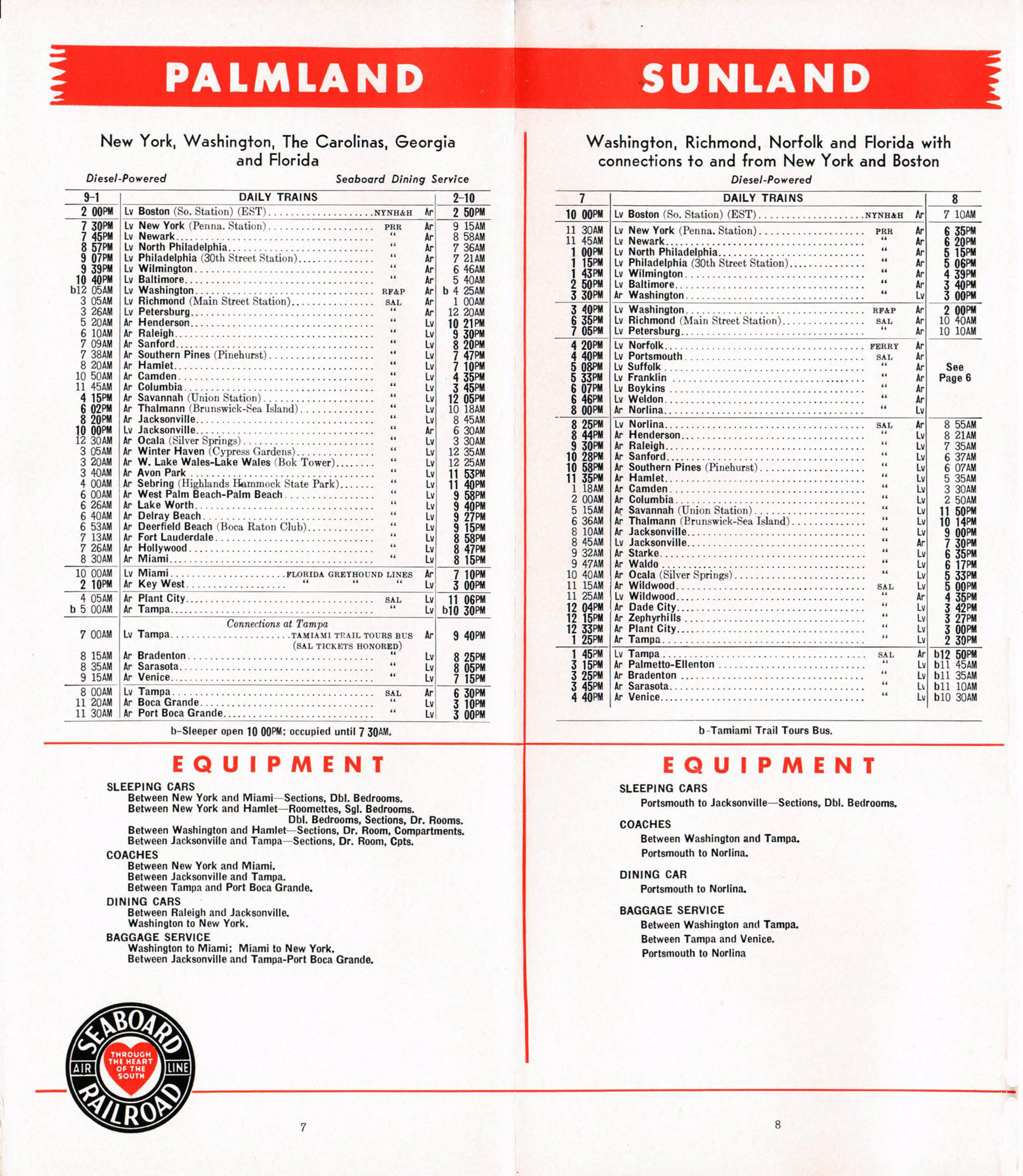 During the spring of 1956 the train began offering its first lightweight sleepers but the new status, in essence, was the beginning of the end for the Sunland.  After unsuccessfully trying to placate a balance between cost and quality of service with its dining amenities in late 1957 Seaboard removed all food-service from the train.

The railroad was still seeing strong ridership along its Florida-New York corridor, especially by way of the Silver Meteor, but secondary trains were becoming a burden.

In 1958 more severe cutbacks came to the Sunland when southbound #7 was entirely discontinued north of Hamlet; its northbound counterpart continued to operate to Washington, D.C. but was more or less a mail/express-only run.   The Sunland's losses spoke to a larger issue afflicting the nation's passenger rail services of that era.

As the traveling public abandoned trains for highways and airlines, railroads naturally cutback their fleets focusing only on the most important trains and eliminating those of less importance.  In some cases, passenger service was discontinued entirely.

From the late 1950s, forward the Sunland was basically a regional train connecting North Carolina with Florida.  In the case of the Seaboard Air Line, management probably felt content reducing the train to such a diminutive stature since its counterpart, the Palmland, operated throughout the 1950s and 1960s largely unscathed save for some cutbacks in dining amenities.

That particular train continued fielding several sleepers, coaches, and light food service through the end of the Seaboard era.  It even managed to survive until the start of Amtrak.

The Sunland's reduced schedule and consist soldiered on for the next decade carrying a mix of equipment and hosting significant head-end business throughout the 1960s.

During these final years the train could regularly been seen powered by new SDP35s, which provided none of the streamlined accents common with Electro-Motive's E series but the diesels had the ability to pull double-duty in either freight or passenger service.

The Sunland was still on the timetable following the merger with Atlantic Coast Line in the summer of 1967 forming the Seaboard Coast Line.  As the new road shuffled its remaining passenger operations its not surprising that the Sunland was left behind; the train was gone from the SCL's timetable by the end of 1968.