The E8 was one of the final models in the series the builder produced. Manufactured during the late 1940s through the mid-1950s the E8 was the one of the most successful in the series (selling nearly 500 examples), which was largely due to EMD's lofty status as the premier locomotive manufacturer of the era.

As with the E7, many Class I railroads purchased the E8 for use in passenger service and their reliability saw them remain in use all of the way through the early days of Amtrak.

Interestingly, after all of the previous models since the E3 had carried 2,000 horsepower EMD decided to bump up this rating in the E8. Today, the E8 is the most well preserved designs of the series with 58 either in operation or on static display around the country. 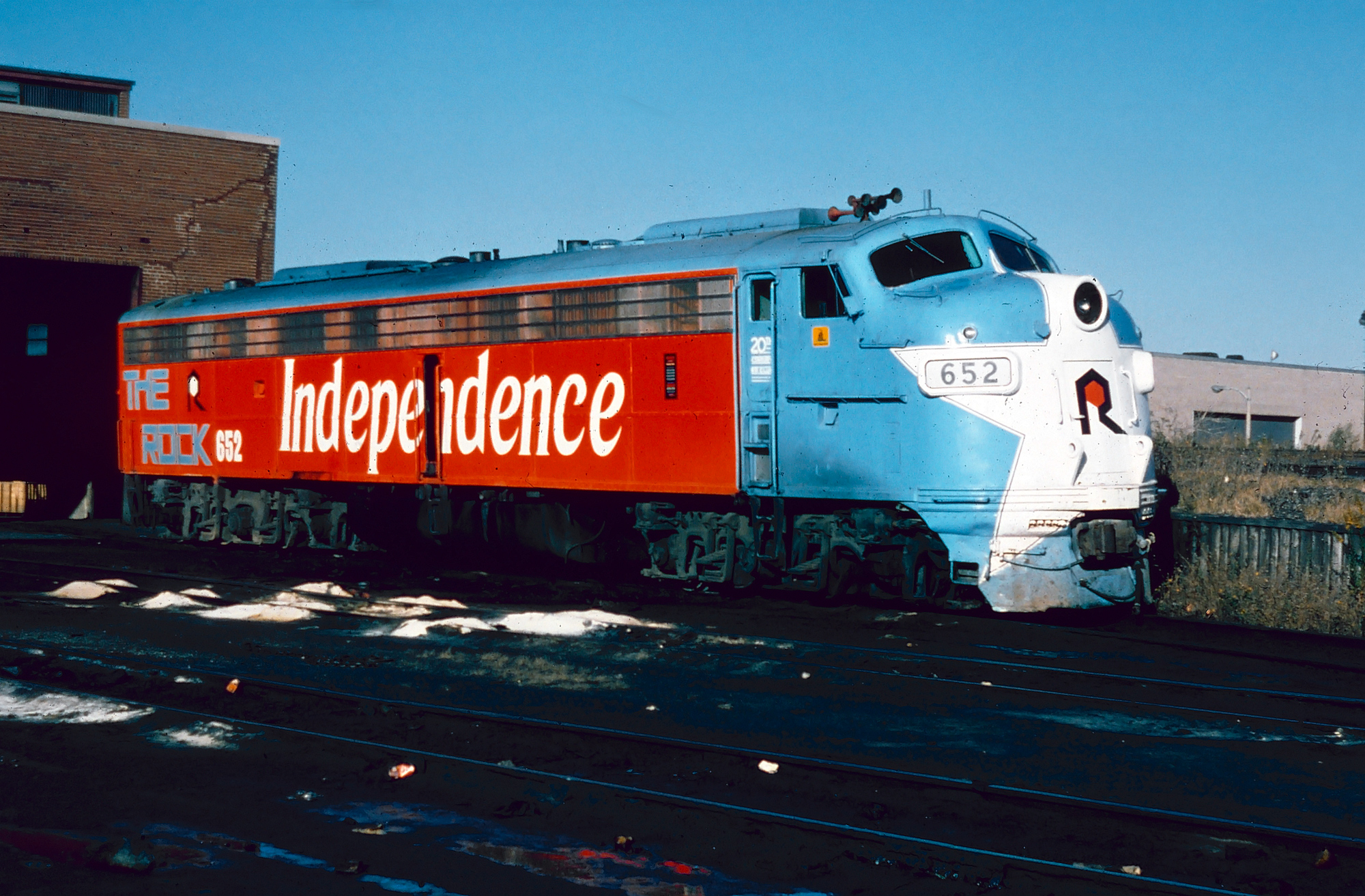 Rock Island E8A #652, wearing its Bicentennial livery, lays over at the 47th Street shops in Chicago, circa 1977. Ameircan-Rails.com collection.

The most famous of these is Bennett Levin's two former Pennsylvania Railroad E8s, #5711A and #5809A. They have been beautifully restored to their original livery and for years hosted special excursions throughout the Northeast.

Unfortunately, with the PTC requirement (Positive Train Control) now in full effect, Levin has elected not to spend the exorbitant costs associated with upgrading the locomotives with this device. 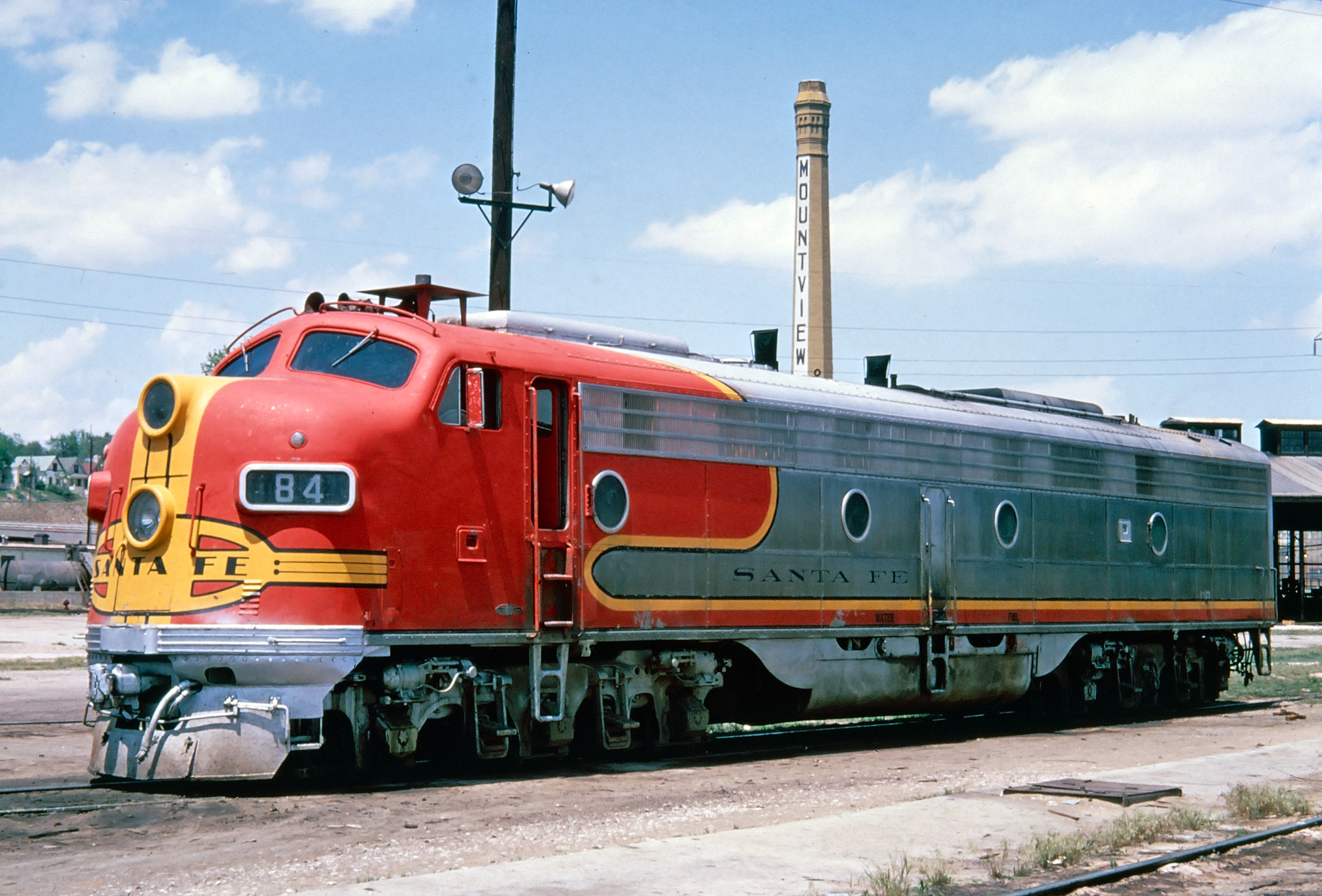 The E8 began production in the late summer of 1949 as an upgrade to the earlier E7 design. This latest model looked almost identical externally to the E7 save for the grill running the length of the carbody and the addition of four port holes.

The E8 also featured the classic "bull dog" nose (which first featured on the E7) and came equipped with two GM-built model 567B prime movers, which combined allowed it to produce 2,250 horsepower, the first upgrade in power since the E3 model.

Once again EMD used an A1A-A1A truck setup (whereby the center axle was unpowered) on the E8 to provide extra traction although they equipped it with a new traction motor, the model D37. 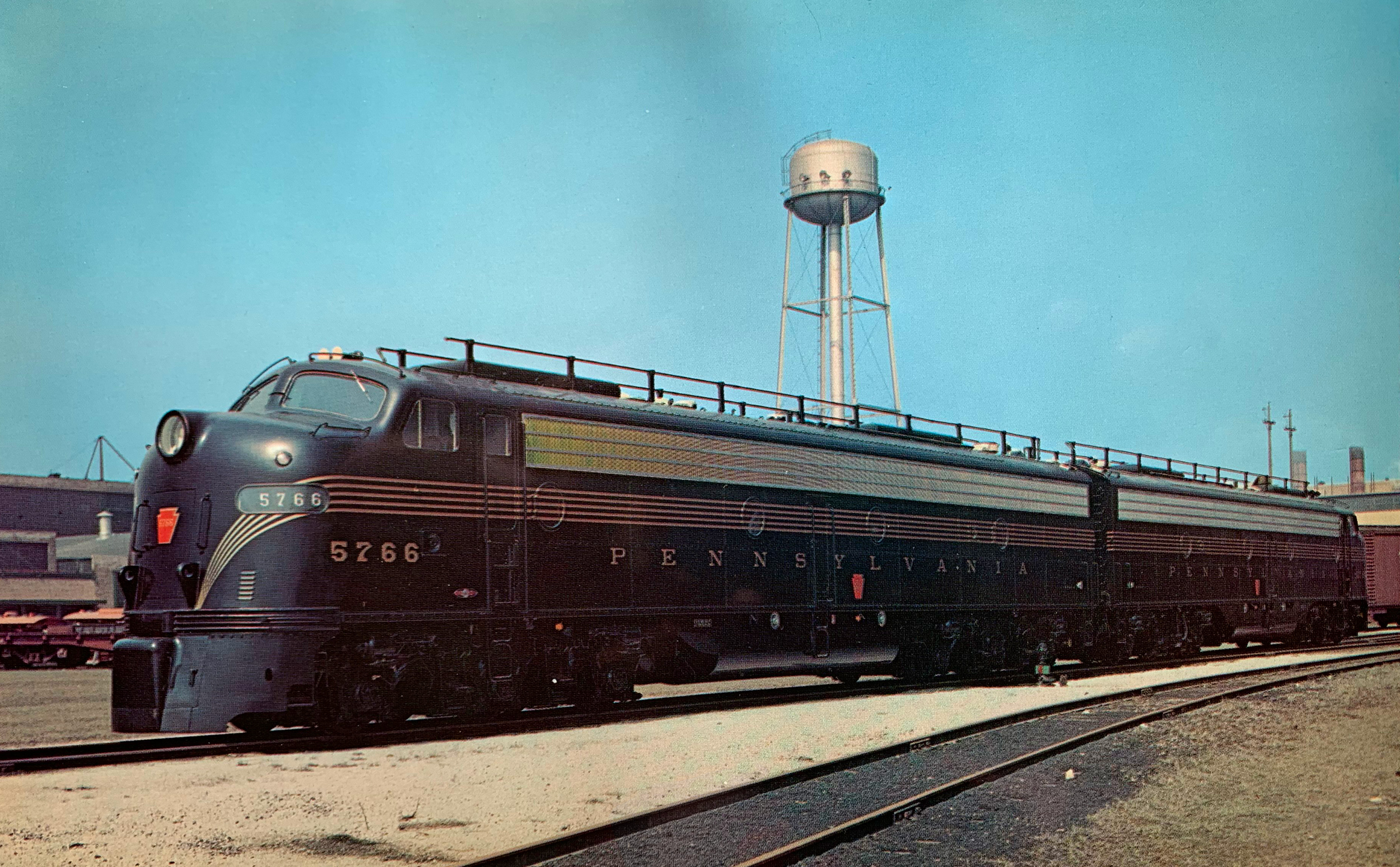 In this Electro-Motive photo, a pair of the Pennsylvania Railroad's recently completed E8A's bask in the midday sun during the spring of 1952. American-Rails.com collection.

EMD's latest passenger locomotive was a bit shorter than previous designs. This began with the E7 where the builder had shaved a foot from the overall length making the locomotive just 70 feet in length.

Of course, visually, one could hardly notice the difference in size. The weight, however, remained the same at 157.5 tons (for the A units, Bs were slightly less).

Railroads again liked EMD's latest E series model (the extra horsepower was a great addition allowing the E8 to pull heavier loads) with numerous Class Is purchasing the E8 for use on their flagship passenger trains. 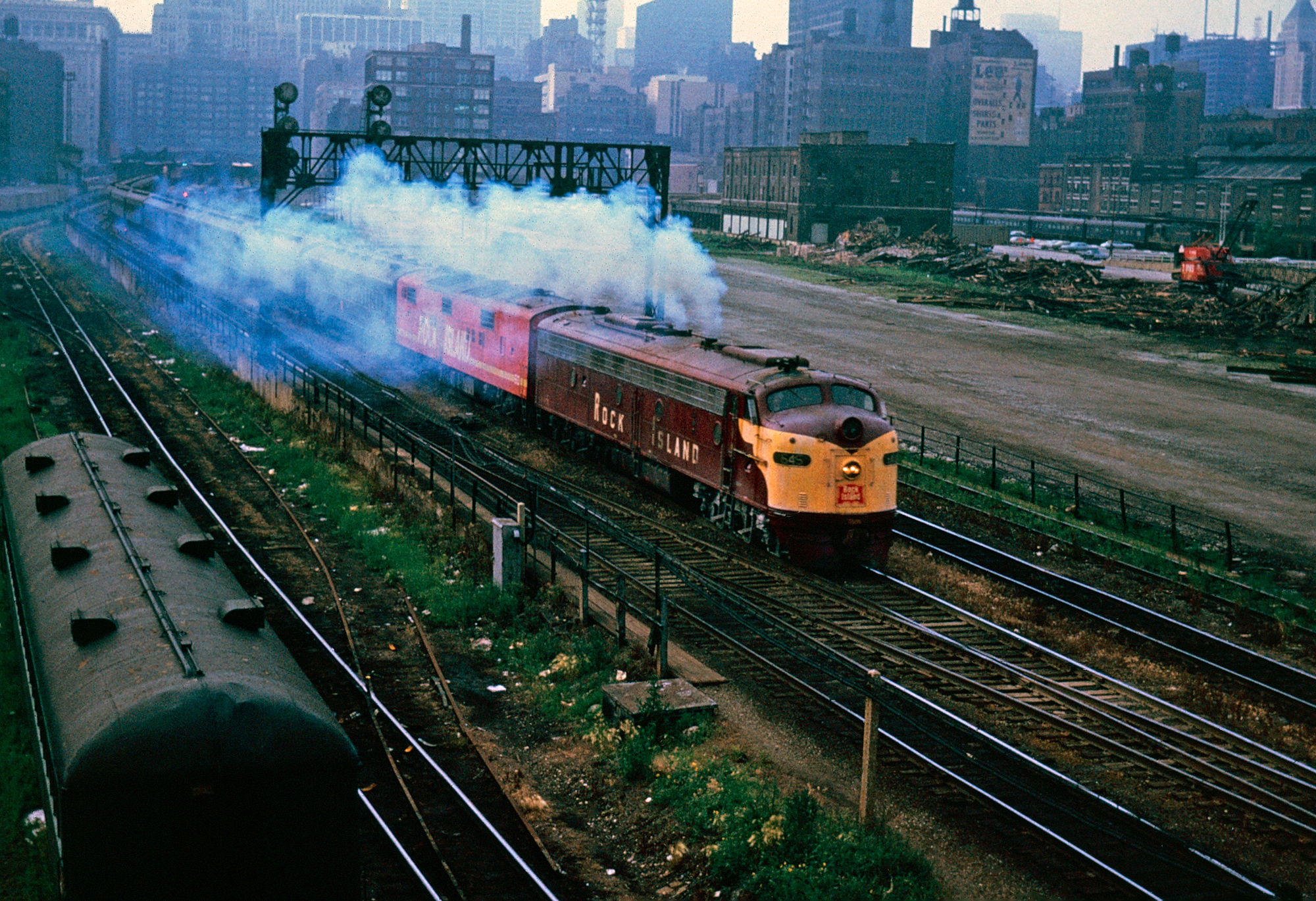 Rock Island E8A #645 and an E7B have an outbound commuter run from Chicago's LaSalle Street Station during a June evening in 1971. American-Rails.com collection.

By the time production had ended on the locomotive in early 1954, EMD had sold 449 A units and another 46 B units with the Pennsylvania Railroad picking up the most, 74. 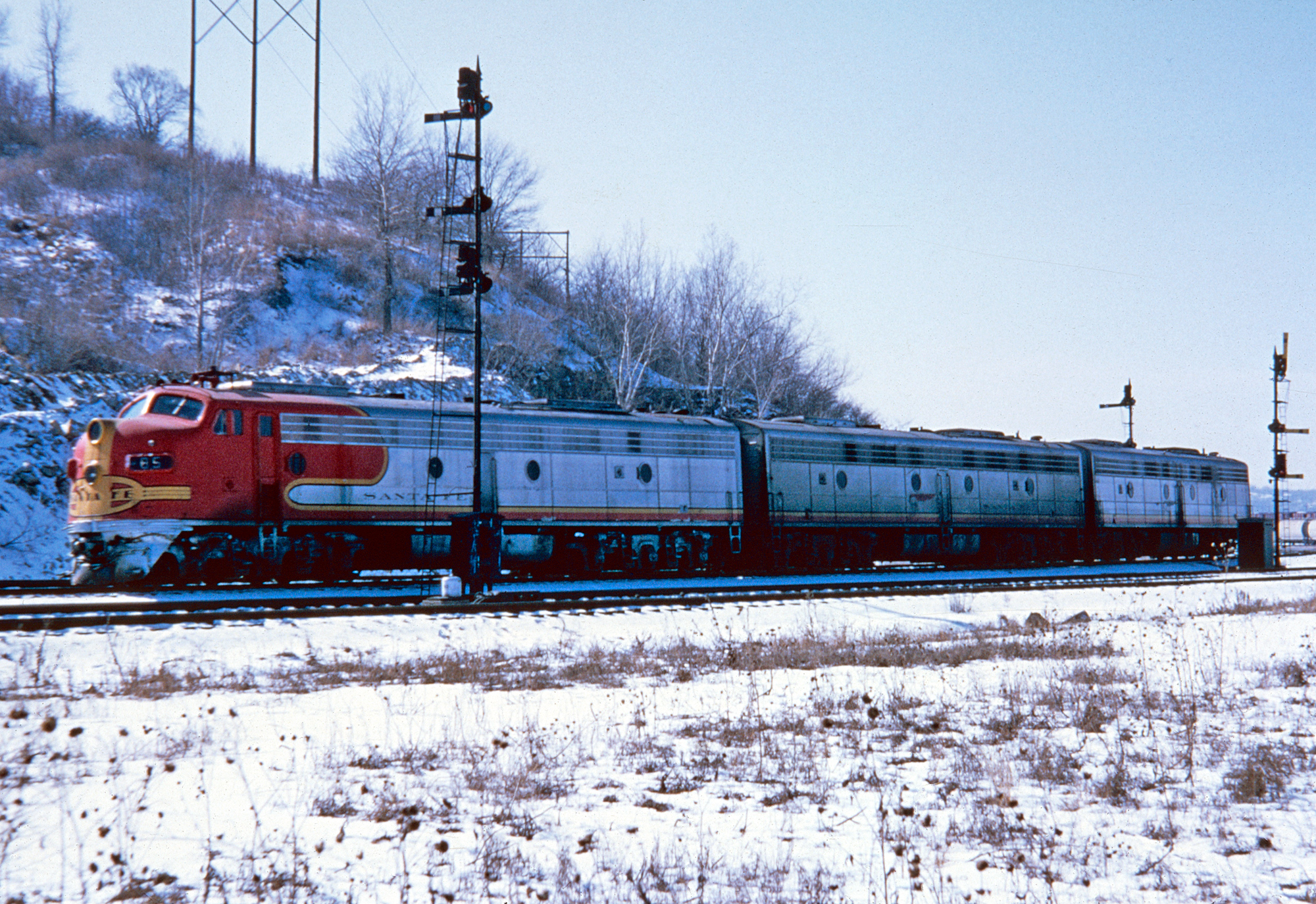 Santa Fe E8Am #85-L (rebuilt from E1A #7) and a pair of E8Bm's (also rebuilt from E1's) head east through Argentine Yard (Kansas) during the 1960s. The locomotives are about to cross Santa Fe Junction on their way to Kansas City Union Station. American-Rails.com collection.

The E8 would all but end the market for passenger model locomotives, at least in regards to wide-scale sales.  As the locomotive ended production in 1954 rail travel was fast losing interest with the general public and railroads, naturally, began devoting fewer and fewer resources to the service.

Ironically, while the E7 and E8 both saw roughly the same number of sales, just one example of the former survives while the latter is one of the best preserved EMD models with dozens still in existence, a few of which remain operational.