The B40-8 and B40-8W (also known as the Dash 8-40B/W) was the single, most powerful four-axle design General Electric cataloged.  It was also the company's last.

Built during the late 1980s, the model came in two versions using either the common Standard Cab or the newer, "North American Safety Cab."

By the early 1990s the wide cab became a required feature on new locomotives, mandated by the Federal Railroad Administration to increase crew protection in the even of a collision.

However, their time on the Class I is likely short; they have been in service for 30 years now and have not been extensively rebuilt.

Interestingly, the wide cab variants did make it into the BNSF livery.  In addition, you can still catch examples on short lines and regionals. 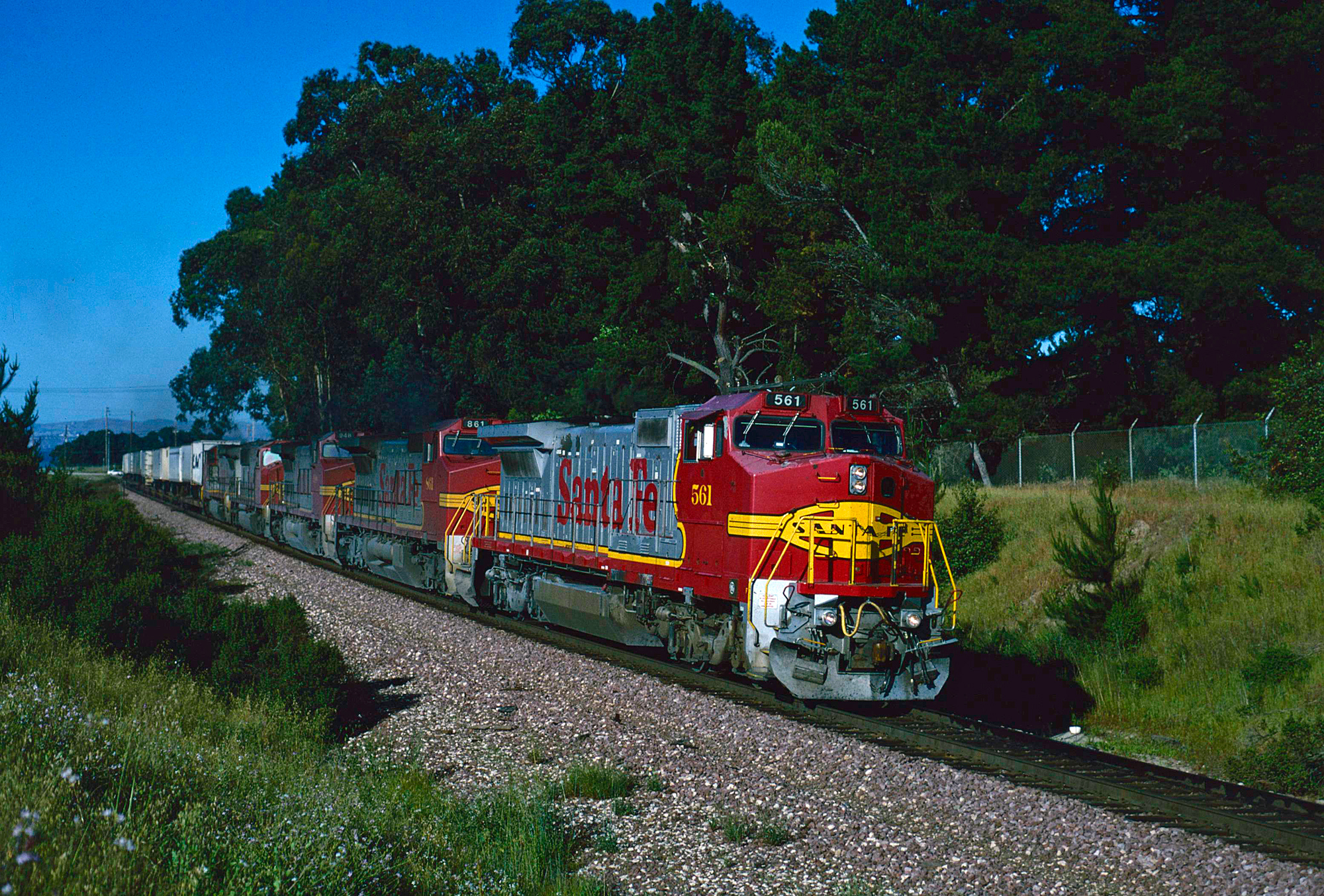 It is the early BNSF era as former Santa Fe B40-8W, #561, and a quartet of other units, lead trailers through North Bay, California during May of 1997. Craig Hamada photo. American-Rails.com collection.

As Brian Solomon notes in his book, "GE Locomotives," the B40-8 coincided with GE's latest "Dash" series, a somewhat confusing moniker meant to differentiate later Dash 8 models from the original "Classics."

To further add to the confusion, the company at first referred to its cataloged locomotives as "Enhanced" variants before changing this to the "Dash" series.

In any event, there were some internal improvements (such as microprocessor upgrades and enhancements to the 7FDL16 prime mover) but most changes were to the carbody; the prototypes had utilized a chassis with long hood very similar to the Dash 7s and redesigned cab while production Dash 8s featured a more streamlined layout.

The noteworthy differences here included a Standard Cab that was a flush with the roofline, a lower nose, equipment blower and dynamic brakes that seamlessly melded into the carbody, and angled radiator vents. 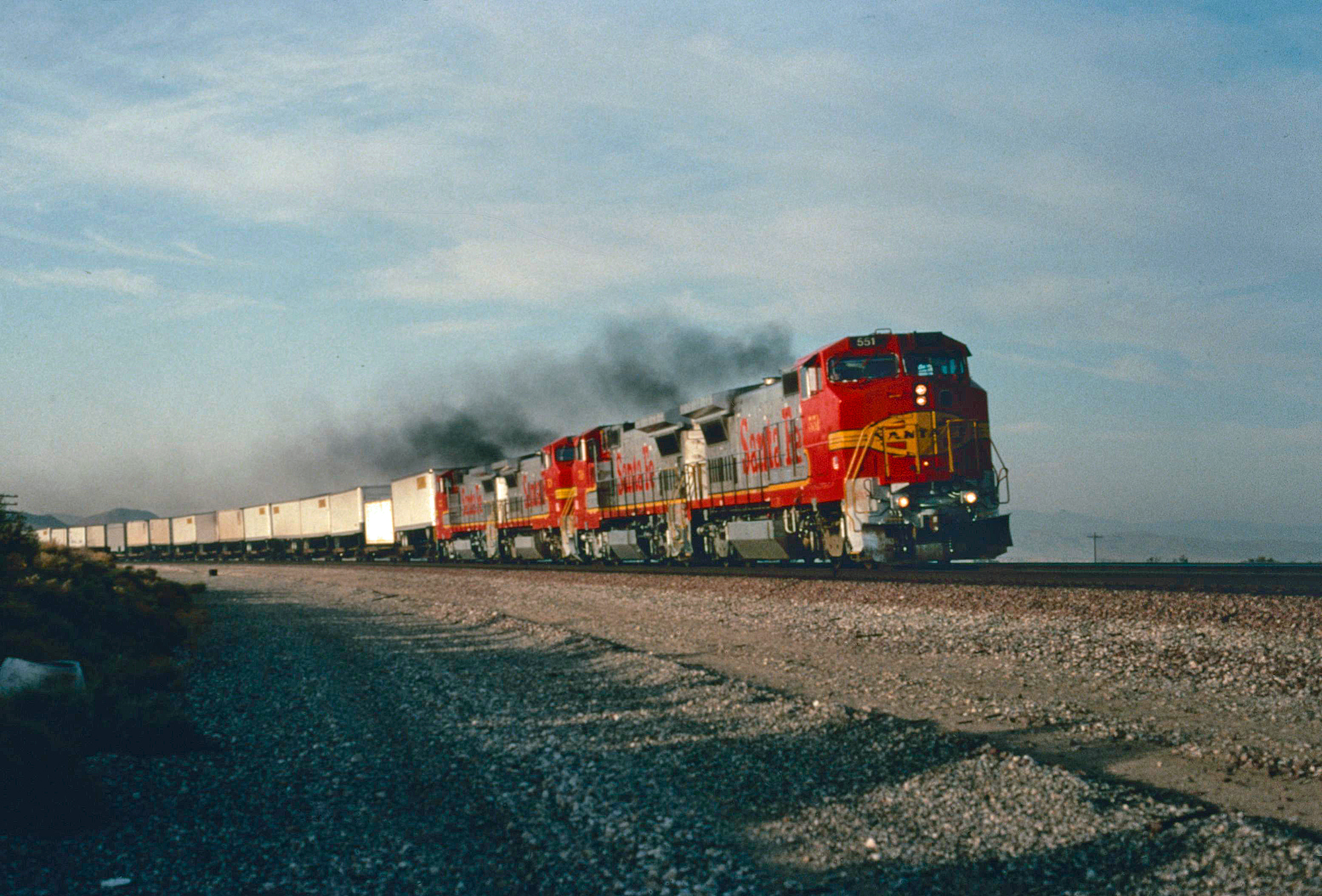 A quartet of Santa Fe B40-8W's lead trailers west over the Transcon main line at Hodge, California on the evening of September 12, 1993. American-Rails.com collection.

By the late 1980s both GE and Electro-Motive were having a difficult time finding a market for high-horsepower, four-motored locomotives (EMD's GP59 and GP60 models, for example, sold just over 400 examples combined).

These designs, of course, had been a mainstay of main line power from the late 1930s until EMD successfully demonstrated the advantages of six-motored models in the 1960s.

But there still remained a market for four-motored road-switchers into the 1980s, predominantly in high-speed freight service where six-axles were unnecessary.  As a result, models like the Dash 8-40B continued to see some success.

As Greg McDonnell notes in his book, "Locomotives: The Modern Diesel & Electric Reference, 2nd Edition," sales for four-axle road-switchers dried up simply due to the increased weight of trains. 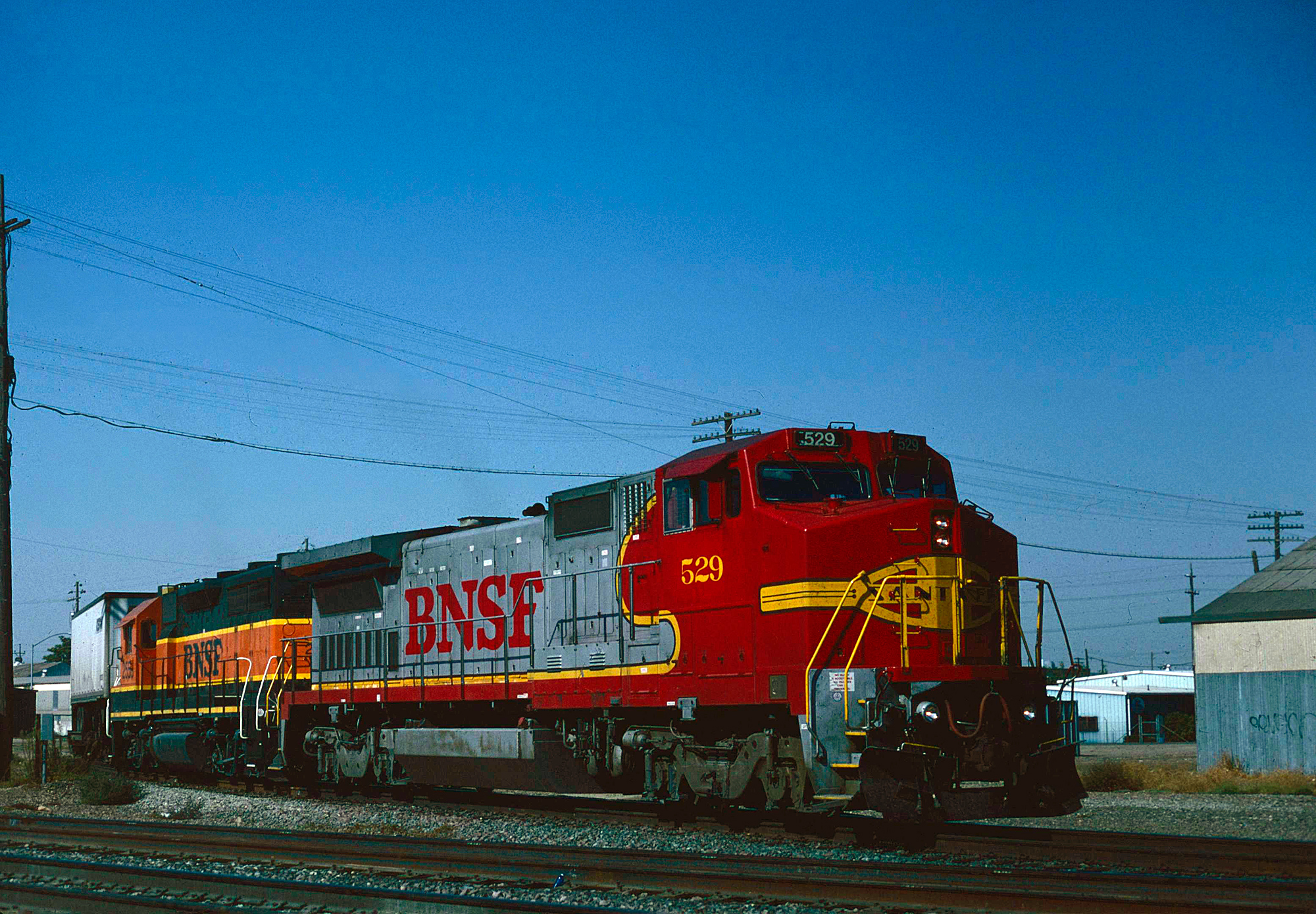 It's the early BNSF era as a former Santa Fe B40-8W is seen here in service at Stockton, California on October 16, 1999. Bryan Copple photo. American-Rails.com collection.

By the 1980s, outside of some perishable and auto part business, expedited railroad service had largely been relegated to intermodal double-stacks.  These trains were very heavy and four-motored locomotives simply could not handle such weights at the speeds required.

As a result, the industry moved away from such designs permanently in favor of their six-motored counterparts.  Since the early 1990s, neither EMD or GE has offered a four-motored locomotive.

The model was also the first to feature GE's new North American Safety Cab, a now-standard wide cab design.  The Santa Fe acquired 83 examples in the early 1990s and these units regularly handled fast freights across the West.