The State Of Maine Express was another of the many joint ventures carried out by the Boston & Maine and New Haven providing passengers with through service along the populated coastal areas of northern New England.

It operated on a year-round schedule running an abbreviated routing in comparison to some more well-known trains in the region.  The overnight run, inaugurated in the early 20th century, interchanged in central Massachusetts and also had a daytime running-mate (which operated only during the warmer months of the year).

The State Of Maine, as it was referred after World War II, survived until the early 1960s when lack of patronage and declining interest by the B&M/New Haven resulted in its cancellation.

It is somewhat surprising that given New England's condensed nature, where towns and cities are only a short distance from one another, so many streamliners and top-tier passenger trains were located.  One could even enjoy such services all of the way to the northern tip of Maine via the Bangor & Aroostook.  It was certainly a different time in America. 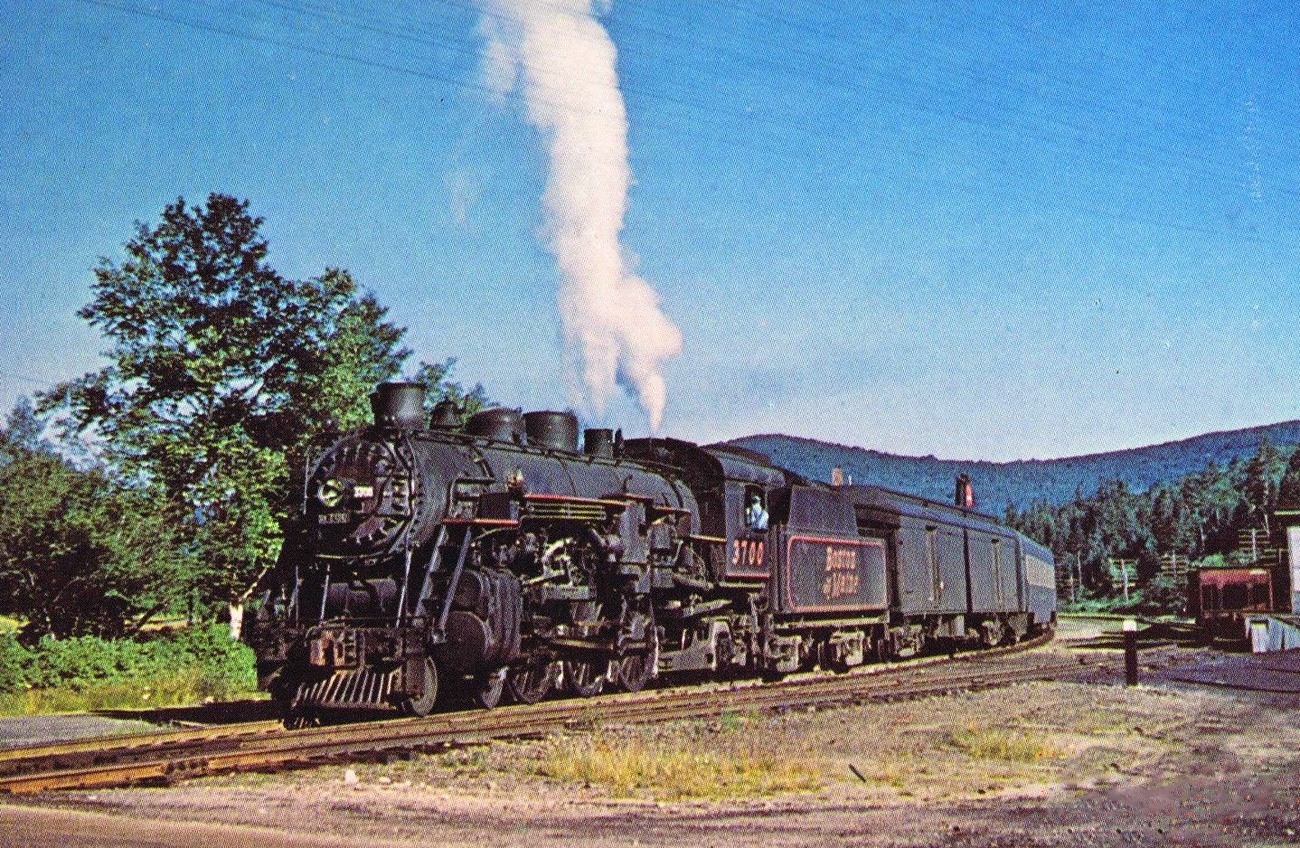 If one lived in the Northeast and New England during the first half of the 20th century they had a plethora of travel options by rail with services far surpassing anything you will find today under Amtrak or the regional commuter agencies (comfy reclining seat coaches, sit-down dining, relaxing lounge cars, Pullman sleepers, etc.).

Most of these trains were joint operations carried out between the Pennsylvania, Boston & Maine, New Haven, and Maine Central allowing passengers to reach the largest cities along the Atlantic coast from Washington, D.C. to Bangor, Maine.

The State Of Maine Express was one such train, operated by the B&M and New Haven connecting New York City (Grand Central Terminal) with Portland, Maine at a distance of 343 miles.

Interestingly, as Kevin Holland notes in his book, "Passenger Trains of New England, In The Streamline Era," occasionally Maine Central equipment led the train north of Portland congruent with the two roads close connections and common management after 1933.

The New Haven and B&M interchanged all of their through services at Worcester, Massachusetts since each operated separate terminals in Boston precluded that city as an option.  The Express ran essentially a truncated route of the seasonal East Wind (Washington - Bangor, Maine) but provided year-round service via an overnight schedule.

This meant sleepers and Pullmans were regularly in its consist with coaches also in the mix.  Heavyweights were the order of the day but during the streamlined era the train did began carrying lightweight cars as well. 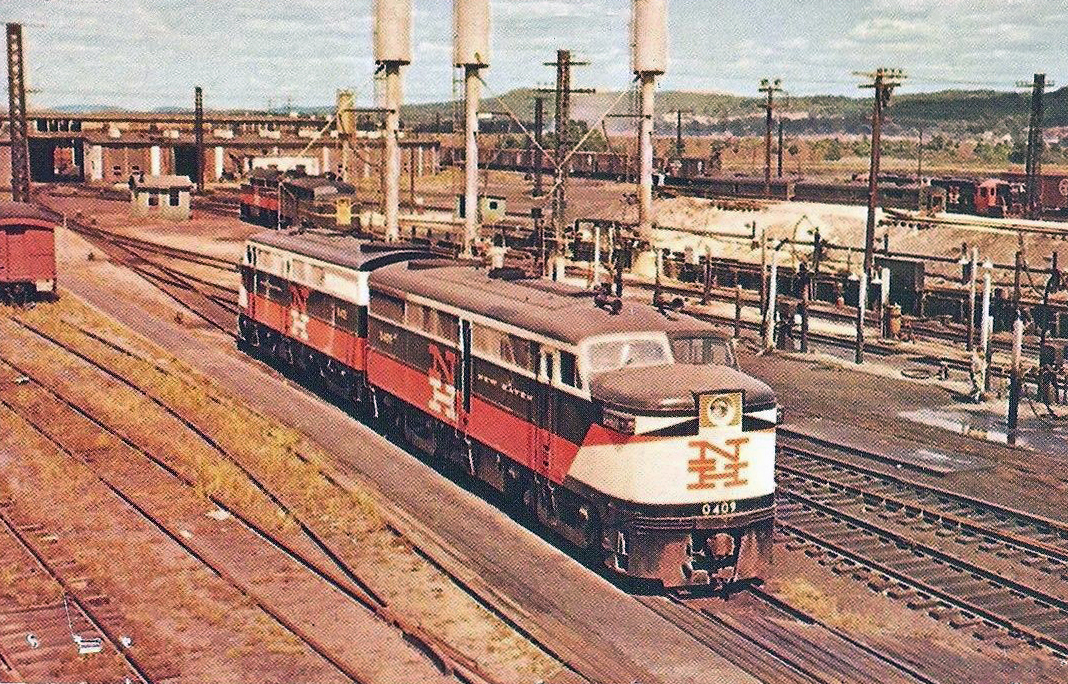 The westbound version provided the same service with additional Pullmans running between Plymouth-Philadelphia and Portland-Philadelphia via the Pennsylvania Railroad.  Finally, coaches as well as a smoking car were always provided between Portland and New York.

During the late, congested World War II years the train had a running-mate known as the Day Express.  It operated only during the daylight hours (hence its name) and in the summer months provided coach service and a diner north of New Haven.

(The below State Of Maine Express timetable is dated effective September 28, 1941.)

Perhaps its most interesting operational feature was the use of Pullman sleepers as standard coaches, utilizing maximum efficiency of the cars that would otherwise sit dormant during the daylight hours between their nightly runs.

After 1948 the State Of Maine Express lost its latter designation and became known simply as the State Of Maine.  Its consist by 1955 still included several sleepers (as many as five on Fridays) along with a sleeper-lounge, a coach (an additional car ran on the weekends), and as many as five head-end cars (RPO, baggage, combine, storage-mail, and express car).

By this era, however, the once popular overnight train (industry-wide) was losing favor with the public as many elected to take their cars instead (or hop on a plane) thanks to improved highways and more reliable automobiles. 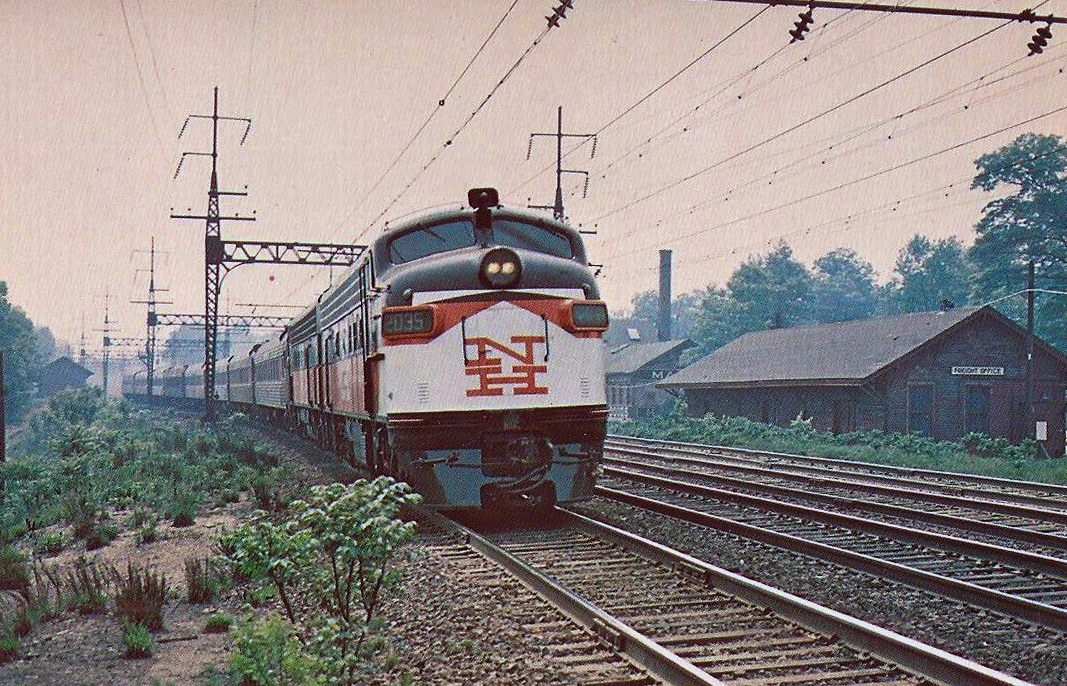 This issue was made worse in the Northeast where cities were within close driving proximity from one another.  One by one once popular trains like the East Wind, Bar Harbor Express, Flying Yankee, and others were dropped as ridership declined to the point that it was no longer economical to continue operating them.

Throughout the 1950s the Boston & Maine had been slashing services, hastened during the presidency of Patrick McGinnis who attempted to reduce operational losses through cutbacks, the new Rail Diesel Car (or "RDC" for short), and lightweight trainsets (unfortunately, this endeavor ultimately failed in miserable fashion).

As for the State Of Maine its end came in late 1960 when the train made its final run during October of that year.