Interestingly, the E4 was built prior to the E3 during an era when the builder's very early passenger models were manufactured primarily for specific railroads (the E3 was one exception, selling a handful of examples to a few different lines).

The E4 was also one of the final produced before Electro-Motive became an official division of General Motors. Aside from a few demonstrator variants the E4s were designed exclusively for the Seaboard Air Line's new streamliner, the Silver Meteor, which debuted in 1939.

The railroad would also go on to acquire a batch for its heavyweight service, the Orange Blossom Special.  The debut of this train caught rival Atlantic Coast Line off-guard, which quickly launched its own streamliner, the Champion.

The E4 was virtually identical to the E3, save for a few minor component differences.  The Seaboard operated the units for nearly 30 years before scrapping them in the mid-1960s.

Unfortunately, none were preserved, although a single E3A has survived, Atlantic Coast Line #501 at the North Carolina Transportation Museum, in Spencer. 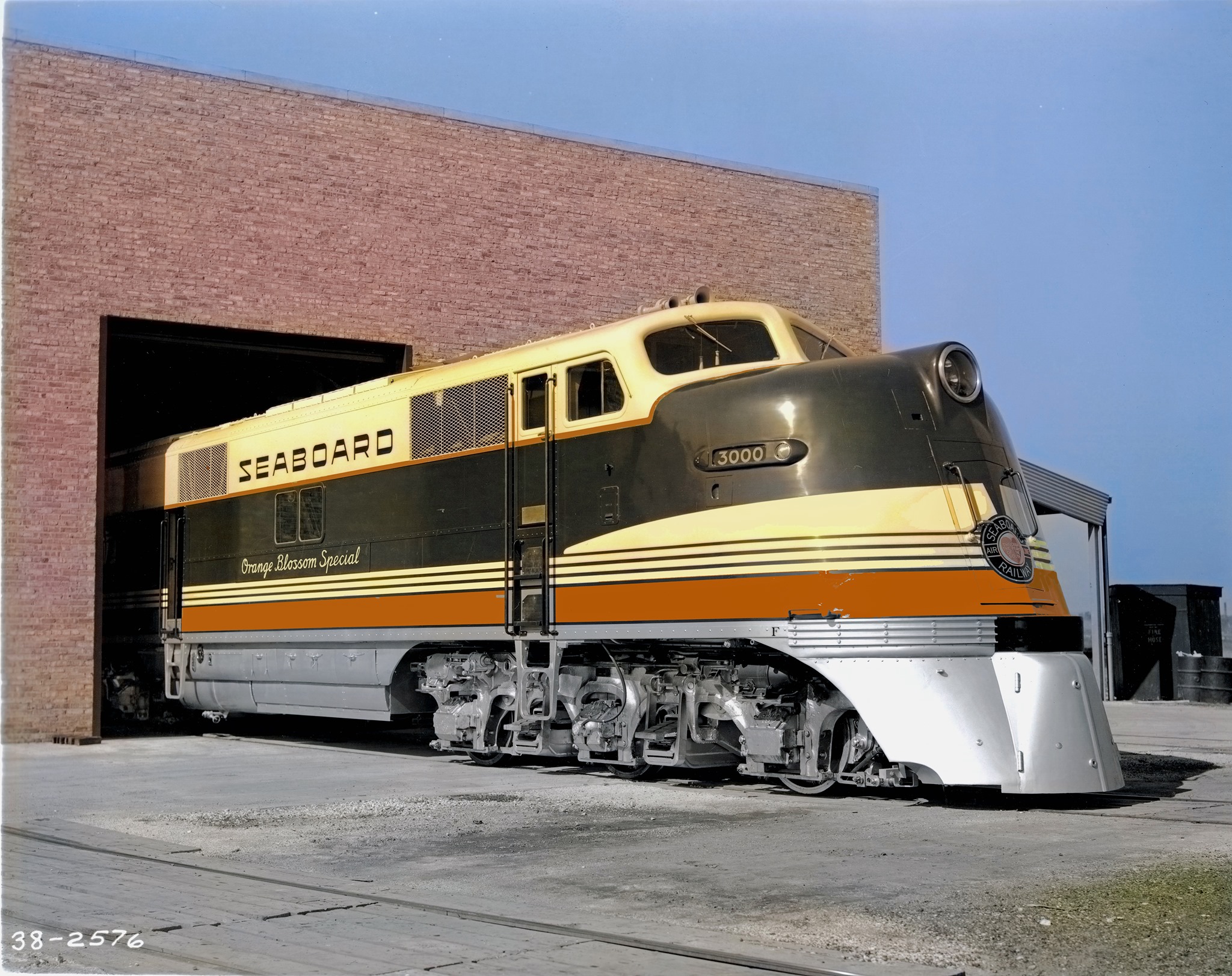 The E4 featured two 12-cylinder 567s enabling it to produce 2,000 horsepower. As with all other models up to that time the model was equipped with A1A-A1A trucks and GM-built, model D7 traction motors.

Essentially, the E4 was another one-off model, in that it was produced primarily for one railroad, the Seaboard, which used it to power its new streamliner, the Silver Meteor.

This train was the first streamlined passenger train to serve southern destinations. Working in conjunction with both the Pennsylvania Railroad and Florida East Coast the SAL was able to market its Silver Meteor as a through train connecting New York City (at Pennsylvania Station) with Miami, Florida. 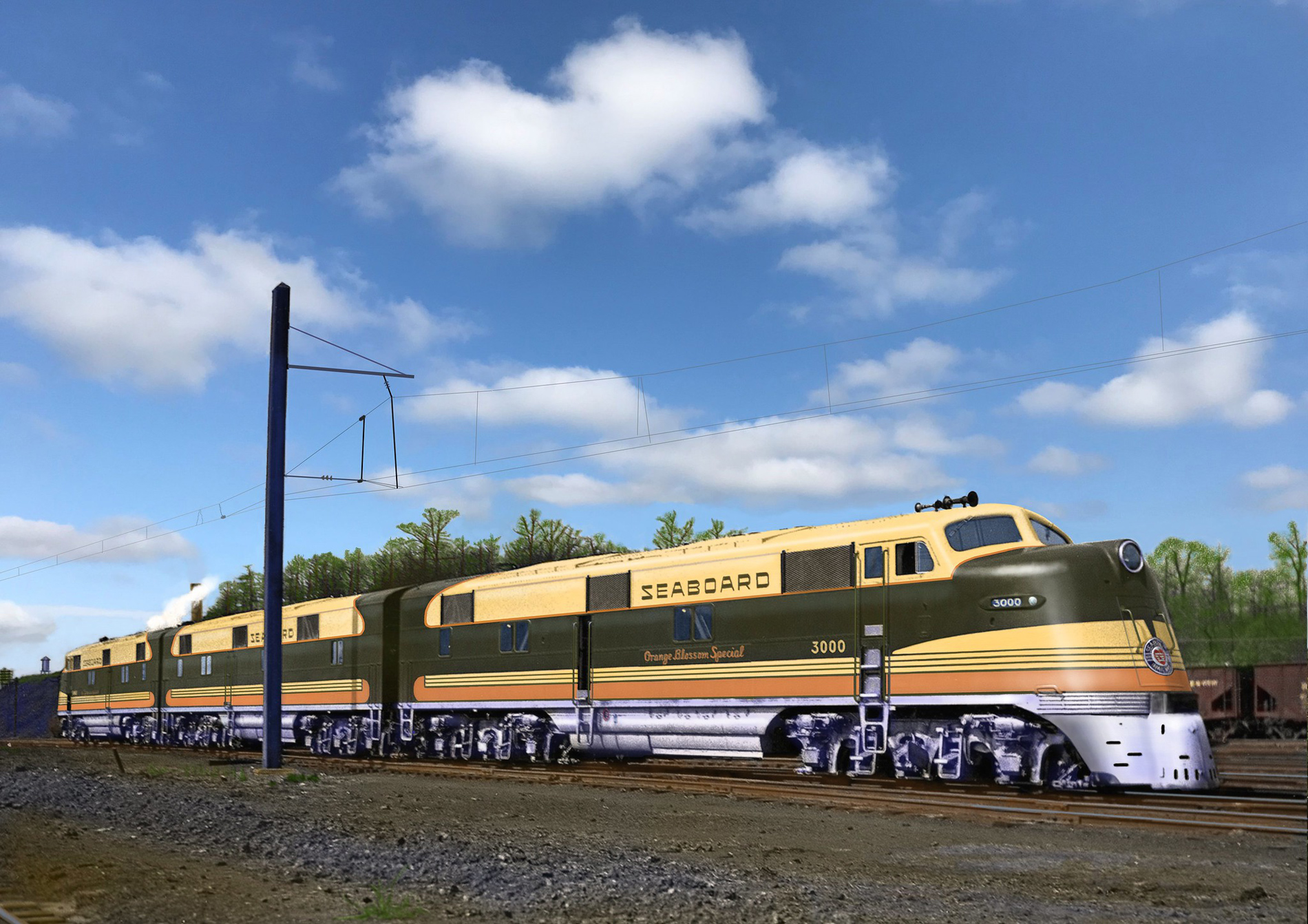 Seaboard Air Line E4's assigned to the "Orange Blossom Special" are seen here at the Ivy City engine terminal in Washington, D.C. during the summer of 1939. Warren Calloway collection (colorized).

Given the train's southern reaches it quickly became phenomenally successful with tourists and those looking to escape the cold weather of the Northeast.

The railroad's rival, Atlantic Coast Line, was totally caught off-guard by this new train and quickly scrambled to catch up. It would release its own train that closely resembled the SAL's (in terms of markets served) just a few months later.

To power the Meteor, the Seaboard ordered 13 E4As and 4 E4Bs. Along with an E4A-B demonstrator set, a total of 19 units were built.

The Electro-Motive Corporation began delivering the E4s to the Seaboard in October, 1938 beginning with E4As 3000-3005, that continued to arrive through that December. Beginning in November, its first E4Bs began arriving, 3100-3102.

The company's last batch of units arrived in late 1939; in November it began receiving its final A units 3007-3012 that continued to be delivered through December.

And lastly, also that same month it received its final B unit, 3103. The Seaboard operated their E4s for more than 25 years before retiring them in 1964.

In their place the company used newer models like the E8 and E9 that they had purchased in the 1950s and 1960s (its first large order of new E models arrived after World War II with the E7s).