The Alco RS36 was the final design of the Road Switcher series the builder would produce. It also saw a reduction in horsepower from the previous design, the RS32.

Unfortunately, the model sold very poorly and only saw a two-year production run. Despite its limited sales numbers the RS36 was purchased by a larger selection of railroads many of which were already quite loyal American Locomotive Company (Alco) buyers.

The future of the Schenectady manufacturer was looking increasingly fuzzy, as by the time the RS36 entered production in the early 1960s a new competitor had arisen, General Electric.

No longer known as a revolutionary and reliable locomotive builder, by the time second-generation models were being produced Alco was regularly releasing reactive designs in an attempt to remain competitive.

Today, there are not only a handful of RS36's preserved but a few remain active, including a pair of Delaware & Hudson units. 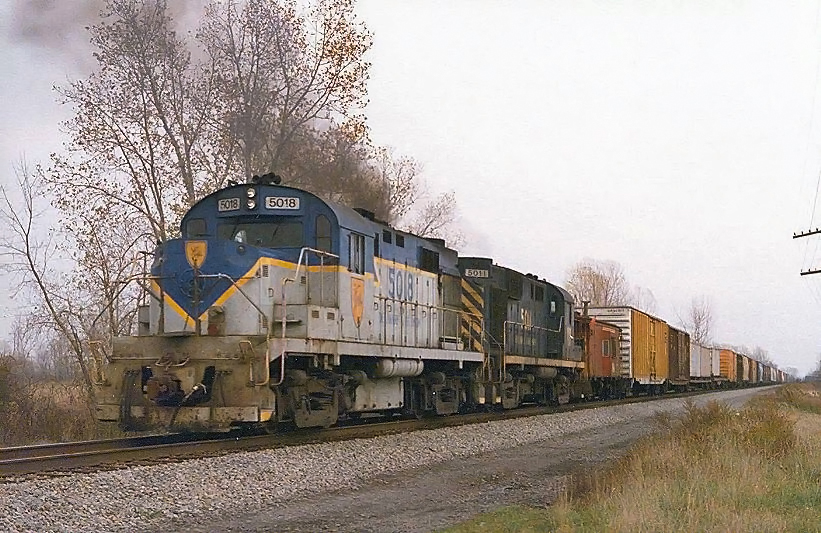 The Alco RS36 (listed by the builder as its DL701A), offering 1,800 horsepower, began production in 1962, just a year before the manufacturer would unveil its second line of road switcher, the Century series.

The model, while offering less horsepower was meant to compete with the Electro-Motive Division's GP30 (which boasted 2,250 horsepower) released at the same time as well as General Electric's U25B (offering 2,500 horsepower).

Production ended on the line lasted for just two years, ending in 1963 when the Century series was rolled out (it may have sold somewhat better had Alco left it in the catalog).

Of the roads which bought the RS36, the D&H rostered the most, which included fifteen units. Despite the fact that Alco was slipping further behind EMD and, eventually, GE in the locomotive market some lines were loyal customers until the end like the D&H, Lehigh Valley, Norfolk & Western, C&NW, and others.

This was mostly due to the fact that Alco models were (even at the time) nearly iconic for their ability to pull heavy loads with relative ease (even though they generally were harder on the track because of their heavier weight).

Additionally, most Alco's came turbocharge-equipped and those which were not could be easily convertible.   Of special note, the builder offered something no one else could; better fuel mileage.

Alco's model 244 and 251 prime movers could get more horsepower using fewer cylinders than the competition. At the time, of course, such savings wasn't (generally) a high priority although in today's environment it would be a real marketing tool if the company were still in business.

Unfortunately, by the early 1960s the sun was setting for the Schenectady builder. Unable to keep up with the competition (EMD's GP30 began yet another wave of highly successful models for that company as it sold thousands of GP35s, GP38s, GP40s, and their variants) Alco would be history before 1970.

Finally, for more information about regarding a complete production roster of the RS36 please refer to the chart above.  From a historical perspective, at least two of these interesting and rare road-switchers are known preserved today.

Both units are of Delaware & Hudson heritage, #5017 and #5019; the former is active and carries passengers on the Delaware & Ulster Railroad in upstate New York between Arkville and Roxbury while the latter is currently sidelined with mechanical issues at North Creek, New York (it's fate is uncertain at this time).