The Electro-Motive  GP7 series was built for both freight and passenger use and would find immense success, even eclipsing its predecessor models to become one of the most success diesel locomotive designs ever built.

The “covered wagons” (slang for the E and F series) would signal the beginning of the end for steam and in just twenty years following the first EA model produced in the mid 1930s, steam would all but disappear from main line railroading (the introduction of GP7 was, perhaps, the final nail in the proverbial coffin for steam).

A year before the GP7's introduction, EMD had unveiled the BL2 model that was intended to be its grand entrance into the road switcher market and compete with Baldwin, Fairbanks Morse, and the American Locomotive Company (Alco) in particular, which had been manufacturing the model for nearly a decade. 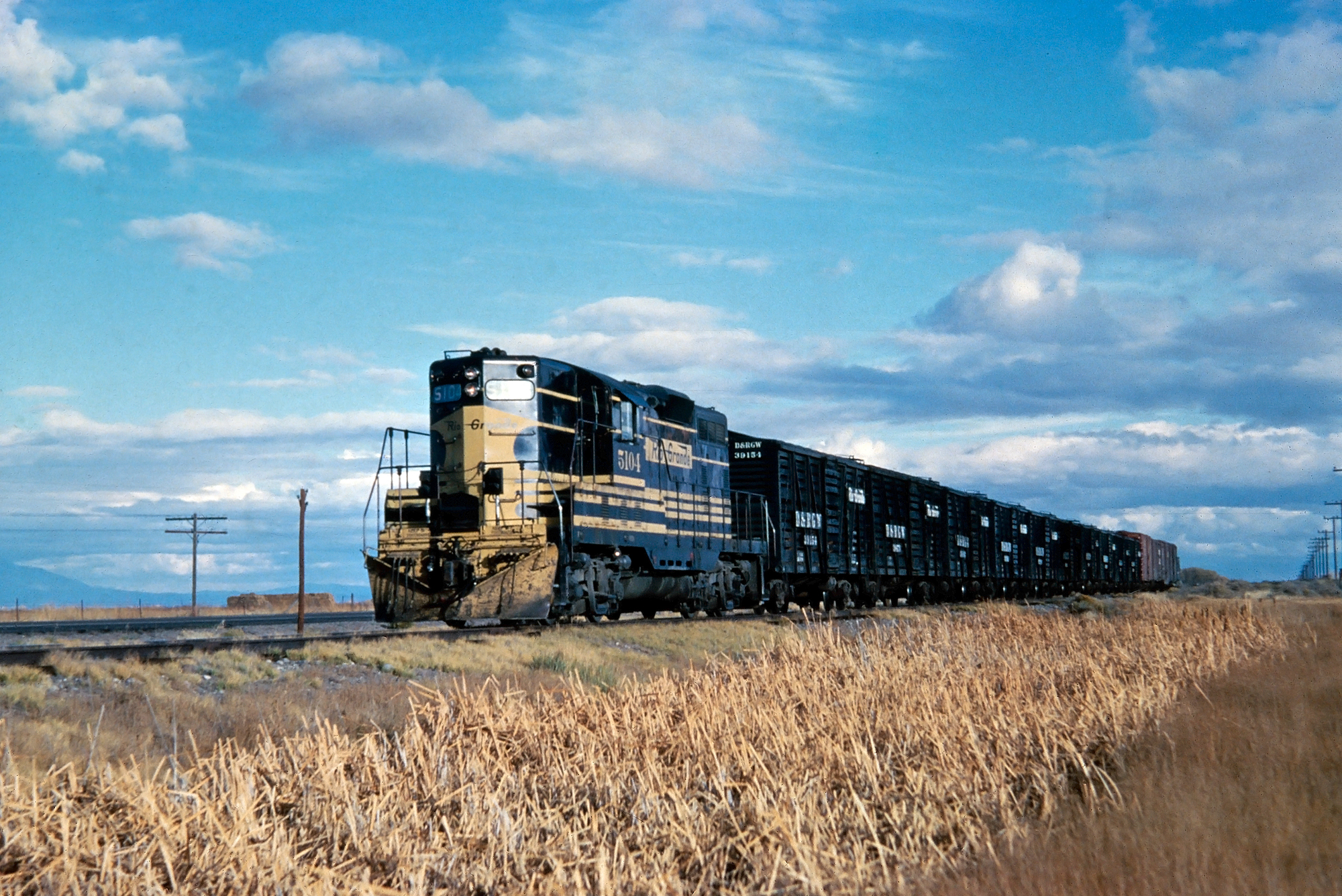 Rio Grande GP7 #5104 leads a string of livestock and boxcars southbound along U.S. 285 outside of Alamosa, Colorado during the 1950s. American-Rails.com collection.

However, the BL2 still lacked essential design characteristics dooming its success. EMD learned from this mistake and sales exploded with the GP7, which quickly surpassed its competition.

The locomotive was so reliable and well built that many remain in service with short lines today.  As mentioned, EMD's entrance into the road switcher market began with the BL2 design of 1948.

The company was frustrated that it was not only far behind the other builders in releasing a similar model but also that Alco, at the time, controlled the road switcher market with its "Road Switcher", RS, series.

Up until that time the company was offering railroads two different models, the RS1 and RS2 that had sold an astonishing 1,200 examples in just eight years. While only moderately powered the RS1 and RS2 offered unparalleled flexibility for train crews with its thin long hood and wide cab. 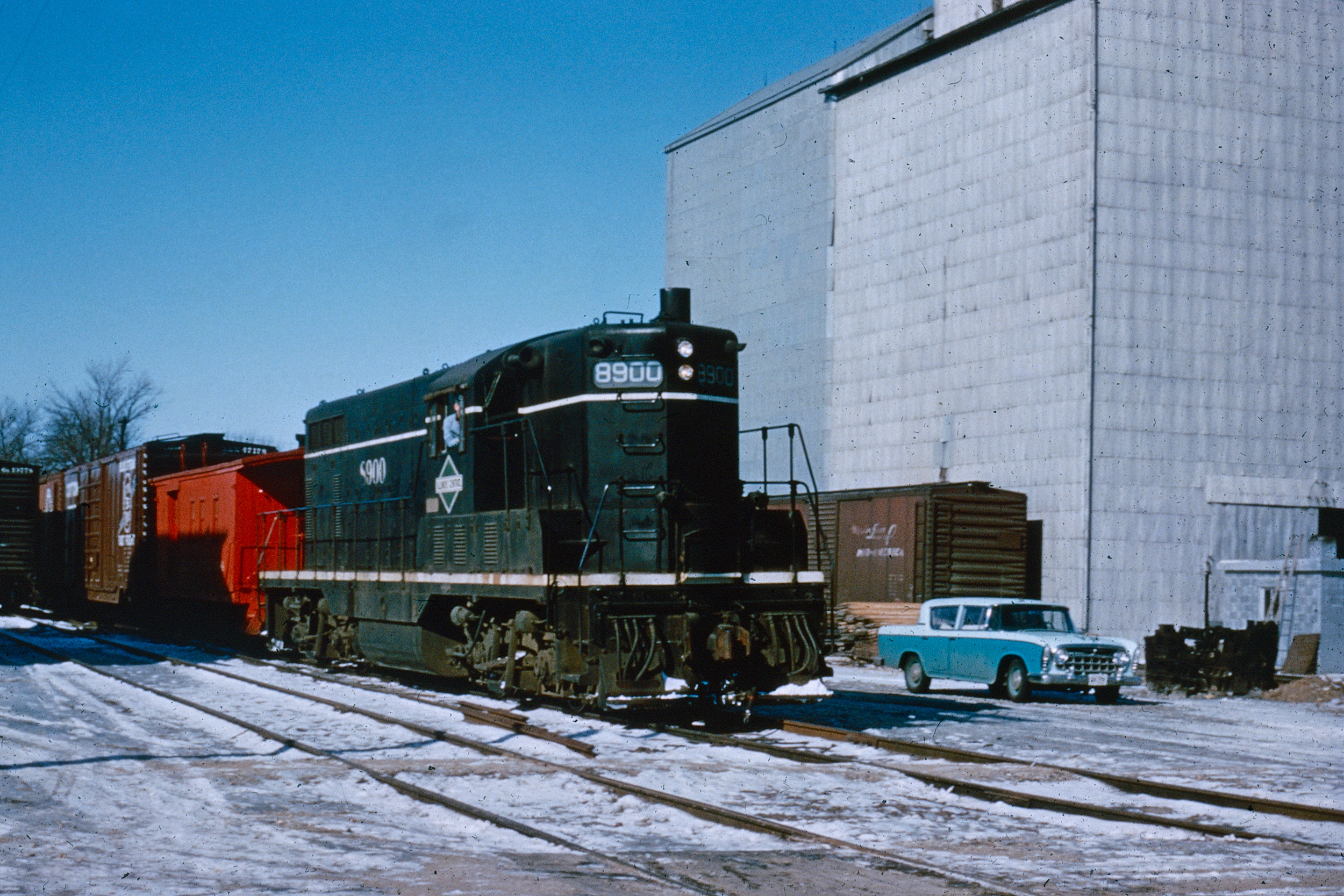 This, in turn, allowed for walkways down the length of the locomotive, and even to the front where a short hood was located.

Additionally, with a semi-streamlined carbody and that short, lead hood Alco's road switchers were ideal for limited passenger service as well.

While both Baldwin and FM offered similar designs like the DRS-4-4-1500 and H15-44, none were as successful as Alco's early lines.

As such, EMD took inspiration from this as well as the failures of its BL2. Spearheading the redesign was once again, EMD's chief engineer Richard "Dick" Dilworth who was instrumental in the development of the phenomenally successful FT of 1939.

Realizing that they already had a reliable and practical locomotive on their hands and simply needed to offer railroads a carbody that was functional Dilworth stripped down the BL2 and started from scratch. 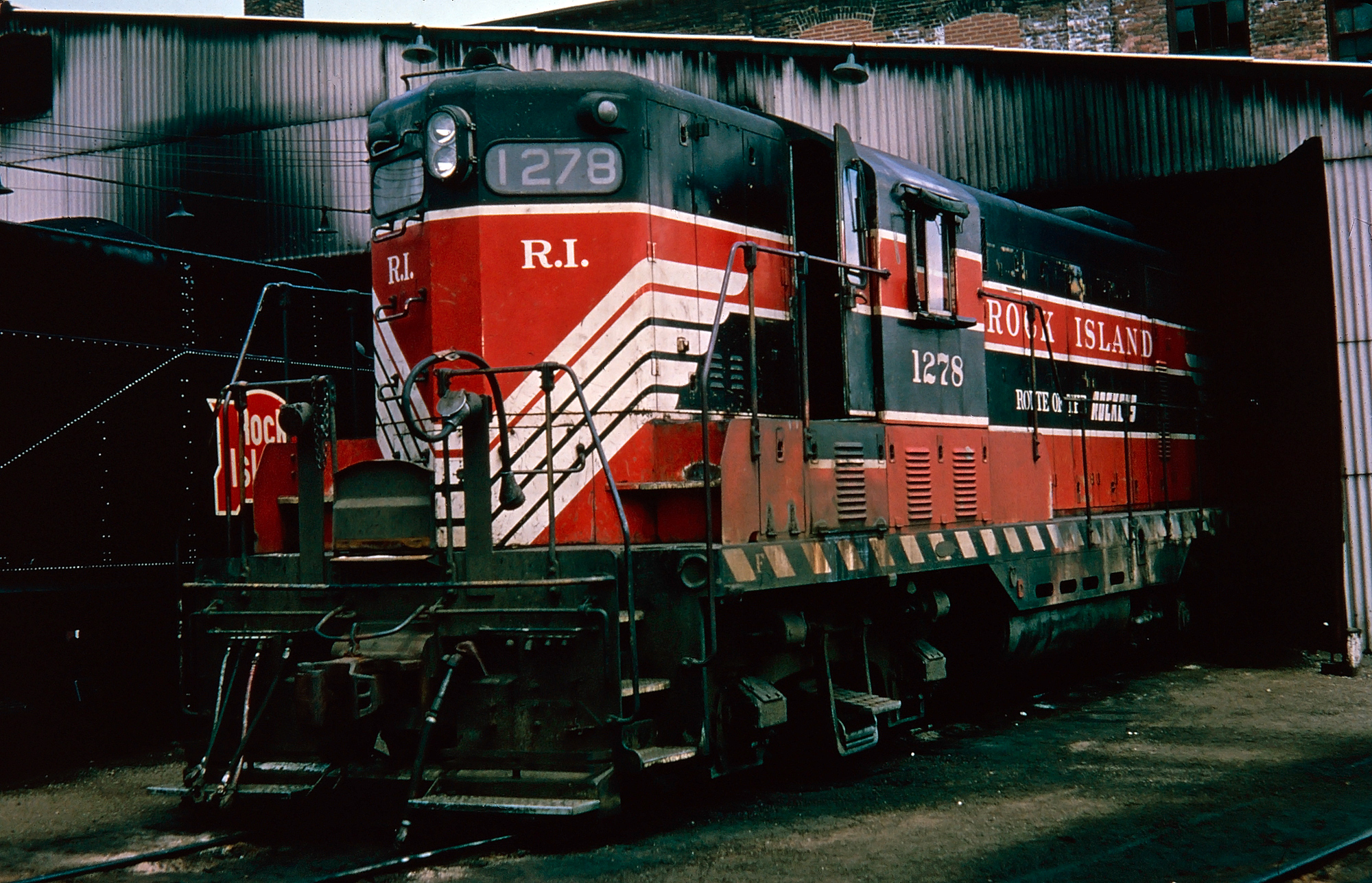 Rock Island GP7 #1278 lays over at the small engine house in Peoria, Illinois, circa 1955. American-Rails.com collection.

He replaced the full length hood with a narrower design and off-set the cab, allowing for a short lead hood. The locomotive was not quite as beveled as the road switchers offered by Alco, Baldwin, and FM.

However, it carried its own stylish appearance with flush lines and tapering at each end. The roof line was likewise clean where it was flush with the cab, unlike in Alco's and Baldwin's models but similar to FM's.

Dubbed the "General Purpose" series or Geep for short to reflect the locomotive's duties as a road switcher the first was named the GP7 and cataloged in October, 1949.

The number "7" was chosen as both the E7 and F7 cab units, as well as the switcher model SW7 were all in production at that time. 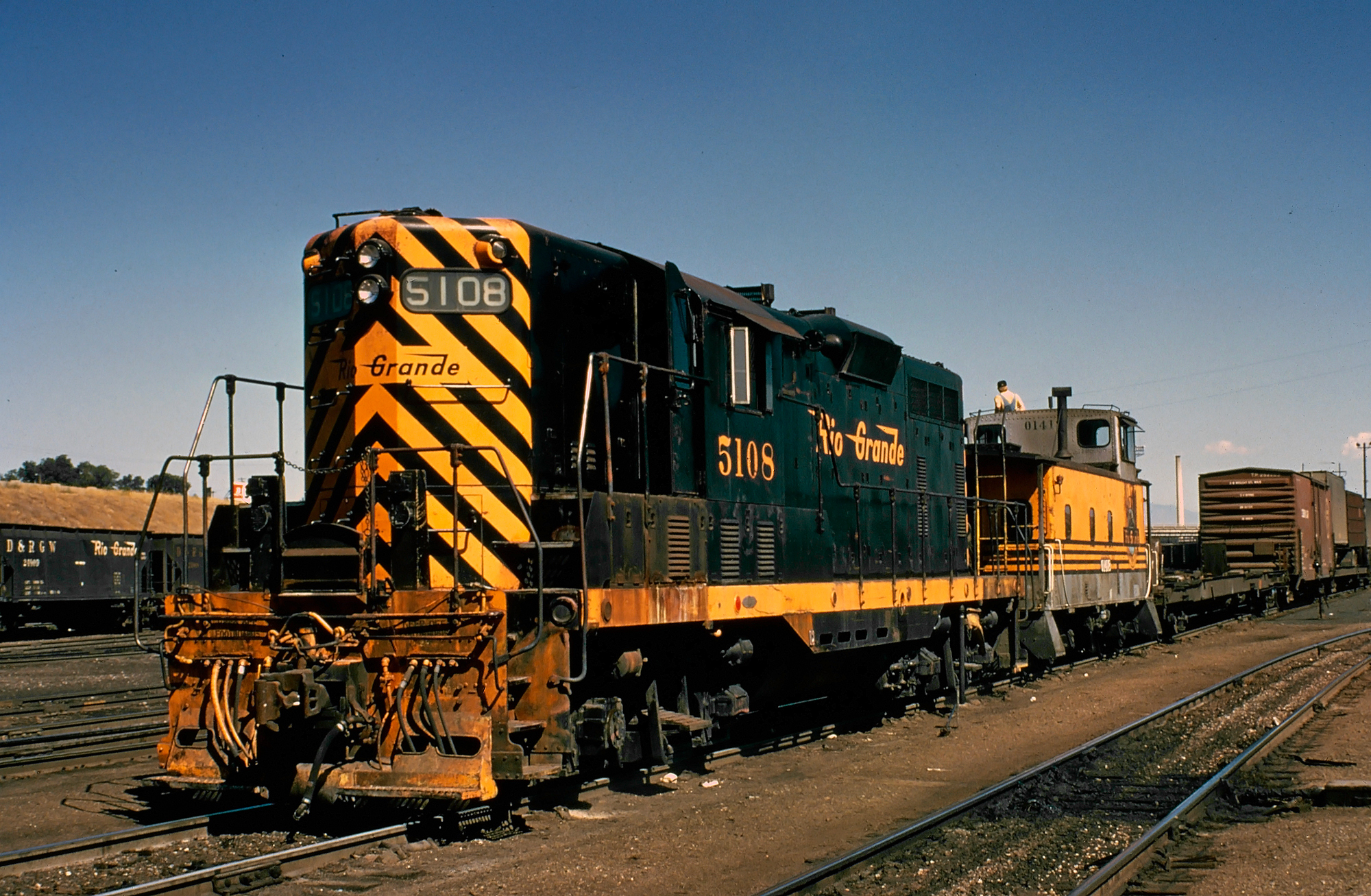 The GP7 carried all of the features that made EMD so highly regarded with its ease of maintenance and nice design features.

The locomotive had an added incentive in that along with being able to handle practically any type of freight service with its 1,500 horsepower rating, the GP7's overall carbody design was also attractive enough to be used in many types of passenger service, which is fascinating in the sense that the the model really offered no type of streamlining.

It was thanks to EMD's styling department headed then by John Markestein, who along with Dilworth helped create the now-classic look of the GP7.

Through 1954 the model sold an astounding 2,700+ units and is widely credited with completing main line dieselization, relegating most remaining steam locomotives to branch line, yard and short line work (an exception would be the Norfolk & Western, which held out on scrapping its steam fleet until the late 1950s). 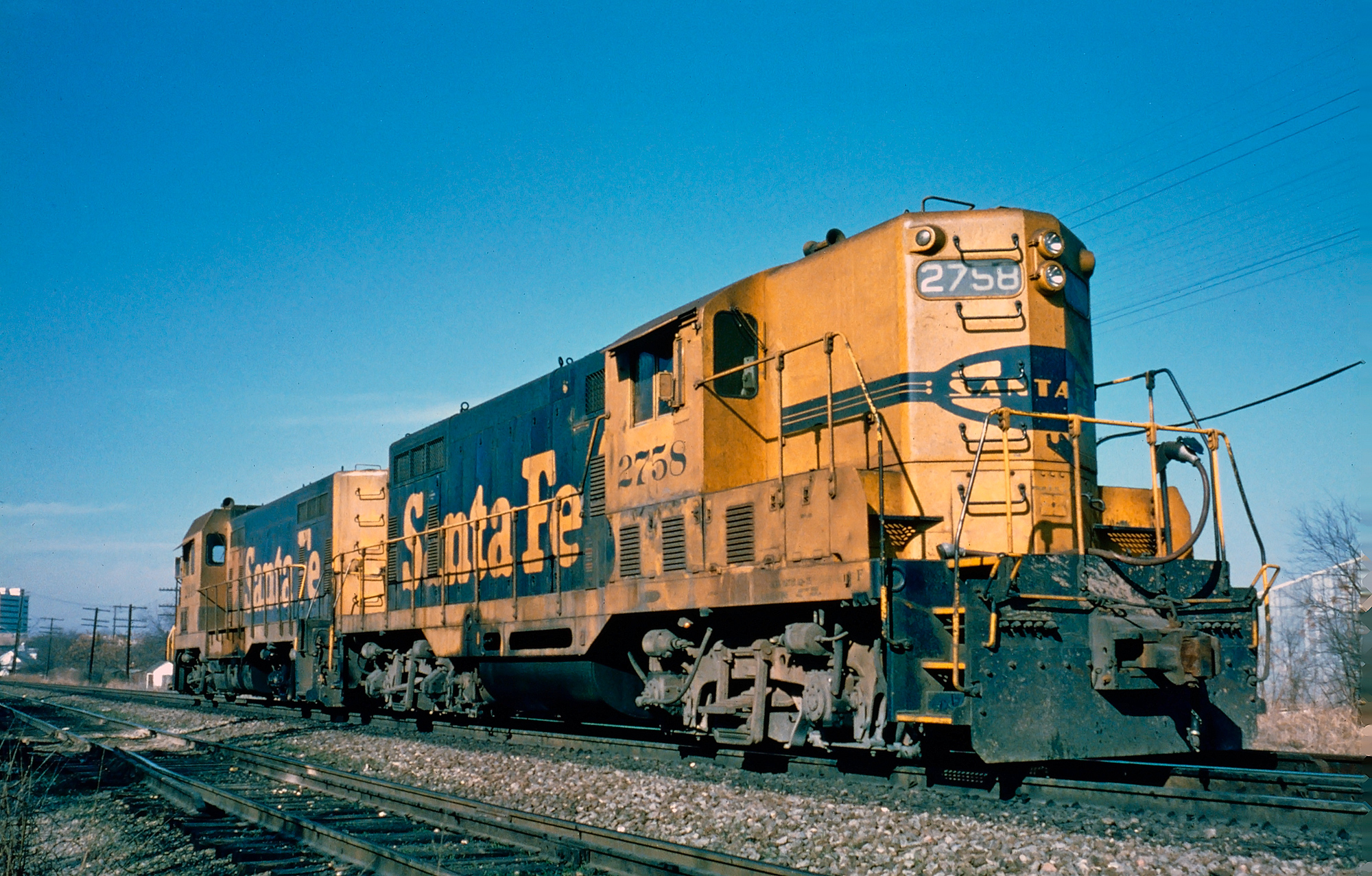 As mentioned above the GP7 carried a horsepower rating of 1,500, which again was not uncommon with among the models being offered by Alco, Baldwin, and FM.

It used EMD's standard prime mover of the time, 16-cylinder model 567B and featured components built almost entirely by General Motors, which was standard for virtually all of its models.

These included things like the main generator (model D12), traction motors (model D27B), and alternator (model D14). However, just like with the other manufactures it outsourced air brakes to Westinghouse with the compressor provided by Gardner-Denver.

With a tractive effort of 65,000 pounds starting and 40,000 pounds continuous these ratings could not quite match Fairbanks Morse or Baldwin but their models did not offer the reliability of EMD. 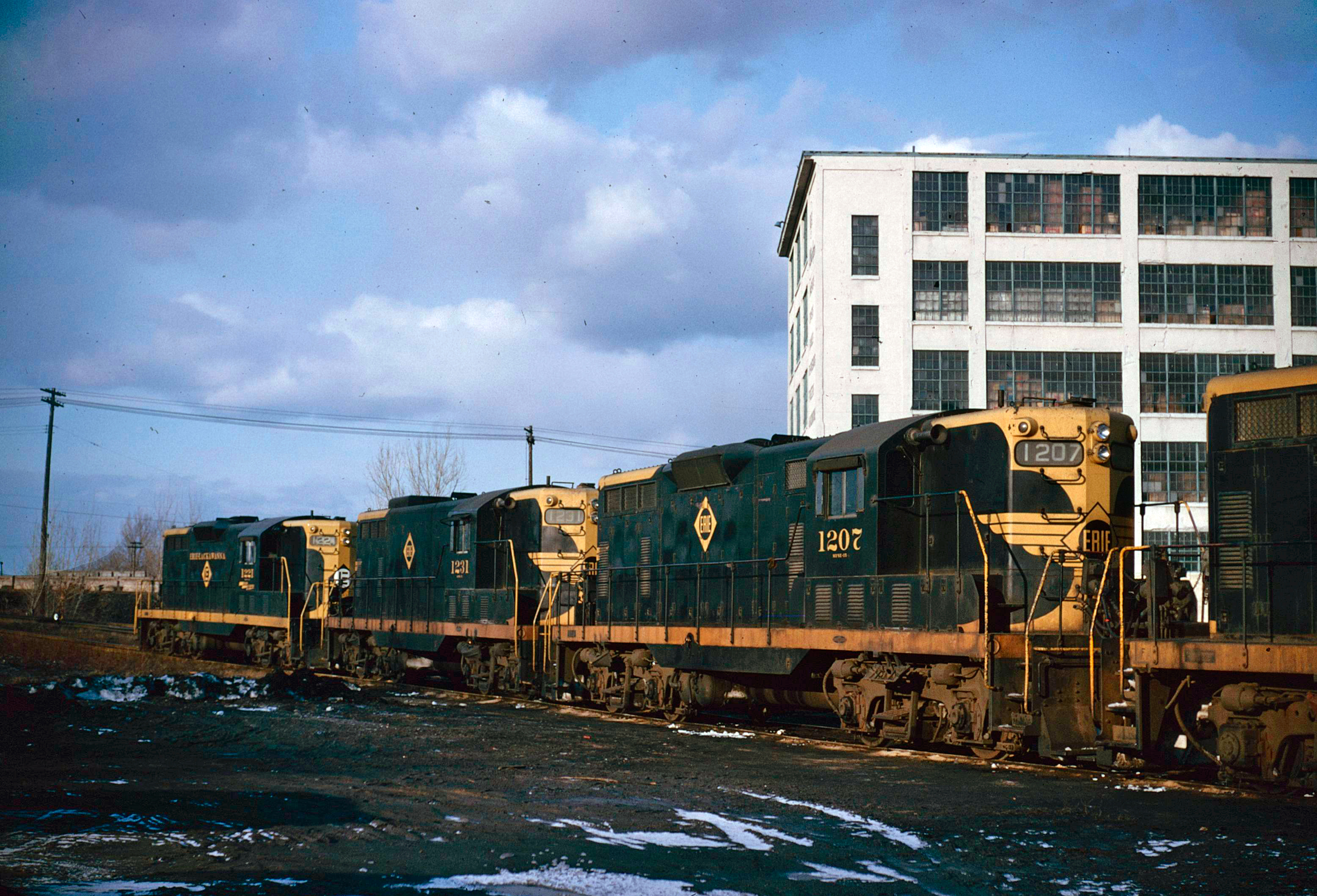 It's the early Erie Lackawanna era as a group of former Erie Railroad GP7's layover between assignments in March, 1964. Photographer and location not listed on slide. Author's collection.

EMD manufactured four demonstrators; #100, #200, #300, and #525 to tour the country in an elegant blue and silver livery. For railroads, it was just what they were hoping for; practicality for use by train crews with the EMD reliability that they expected. 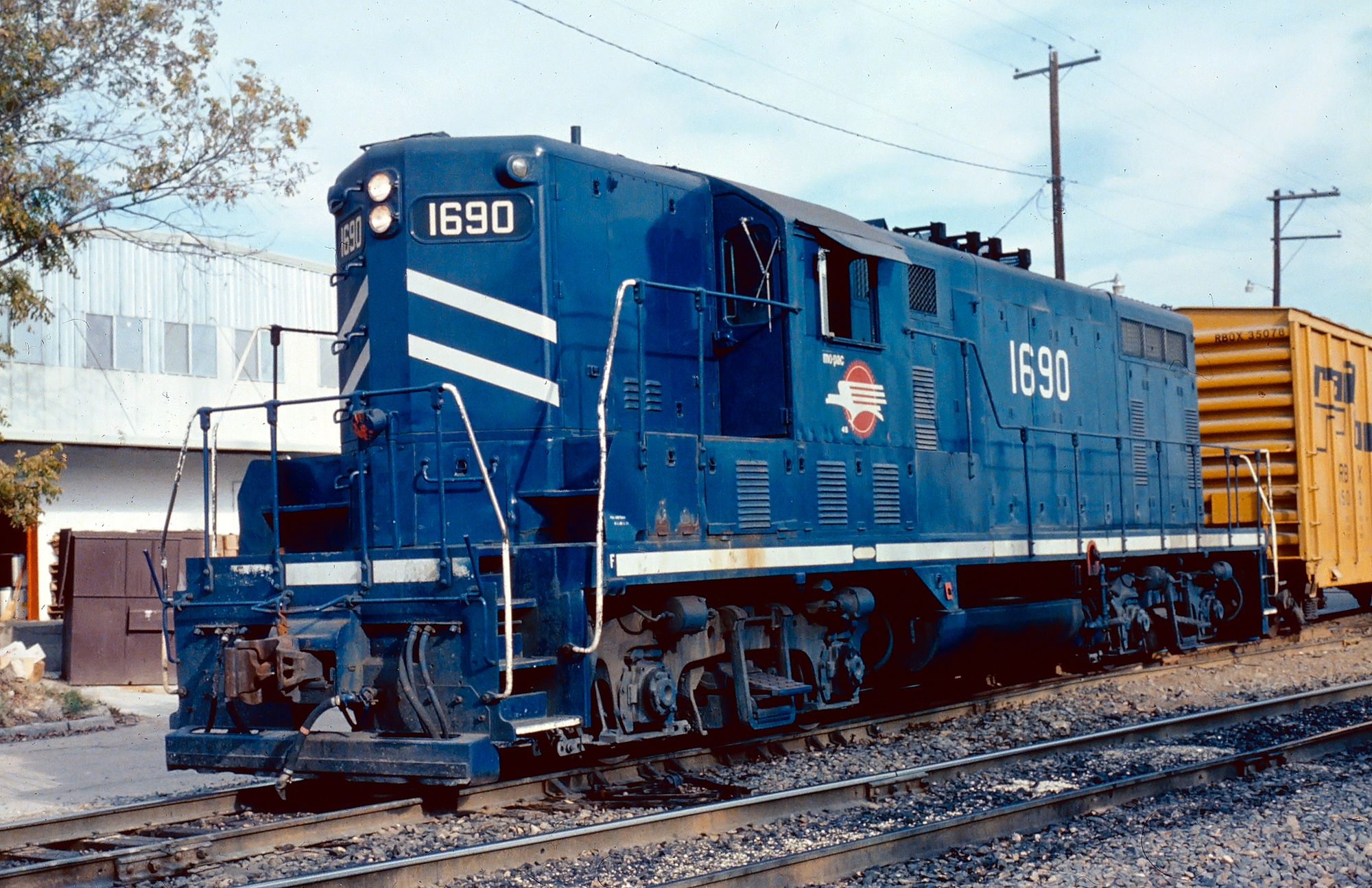 As such, sales quickly took off. It should be noted that there was one request for GP7Bs from the Santa Fe who purchased five in the early spring of 1953, numbered 2788A-2792A.

Also, the model was most commonly built with the high hood but some railroads requested a lowered version in the later standard cab design, which included front windshields (GP7s would also be rebuilt with shortened hoods).

Still commonly found today on several regionals and short lines the GP7 is the classic image of the road switcher with its high, short hood and cab set off to one end leaving for a long hood trailing.

This slide had no information. I presume it was perhaps taken in early October, 1963 along with the others in this bunch. The former Lackawanna GP7 (#960) has been reassigned its Erie Lackawanna number (#1279). Also note the trailing RS3 (another former DL&W unit). Author's collection.

Not surprisingly, with the railroad’s love for the locomotive it was given a nickname that is now synonymous with the GP series; using the model’s initials, “GP,” the locomotives became affectionately known as Geeps (pronounced “Jeeps”).

The GP7 was, however, only the beginning of the series and later four-axle, as well as six-axle models would follow. Because of the GP7s lightweight but strong pulling power it was purchased by not only Class Is but also smaller lines.