The SD70 series was a rebound for Electro-Motive following the issues surrounding its SD50 series. This recovery first began with the SD60 (and its variants) as the model sold more than 1,000 examples allowing EMD to regain some of the reputation that it lost with the SD50.

Although the SD70 could not regain EMD's dominance as the number one locomotive builder, it was still a very successful design with a few thousand different versions of the model operating around the country today (including the SD70M, SD70I, SD70M-2, SD70MAC, and SD70ACe). The SD70 actually hearkens back to the days of the SD40 model and its successes.

It has become so successful that EMD continuous to catalog the locomotive today with the SD70ACe series. Today, thousands of SD70s, and their variants, remains in operation on numerous Class Is around the country. They may not be as common as General Electric models but they are certainly still out there in large numbers. 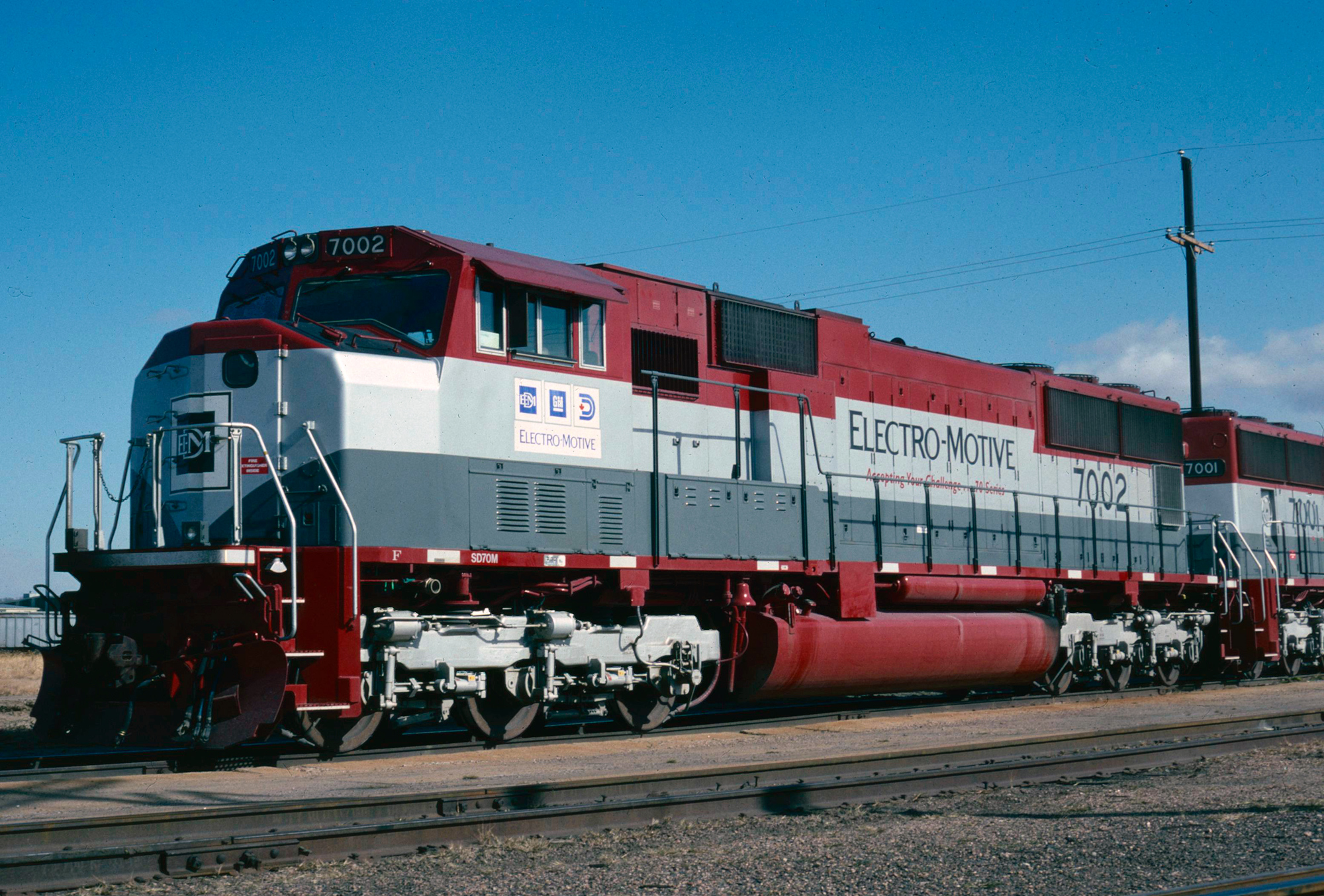 After relative failures with the SD50 and SD60, EMD finally got back on track with the SD70, which was released in 1992, albeit at the cost of having already lost first place in the market to GE.

The locomotive featured EMD’s 16-cylinder 710G3B engine and was rated at 4,000 horsepower although that was not its biggest selling point.

Learning from the failures of the earlier models EMD upgraded its computer systems and microprocessors to be more easily maintained and introduced perhaps the biggest selling point of all; new, radial trucks.

Featuring the HTCR truck (high-traction, six-axle, radial) it could steer itself into oncoming curves instead of just following the rail which greatly reduced wear to both rail and truck/axle components.

Not surprisingly railroads absolutely loved such a feature, which perhaps more than other reason made the SD70 series so successful.

Many railroads have already stated that a significant reason why they buy EMDs today is just for the steerable trucks, an option GE does not offer with its locomotives. One other particular upgrade with the SD70 series was its vastly improved tractive effort. 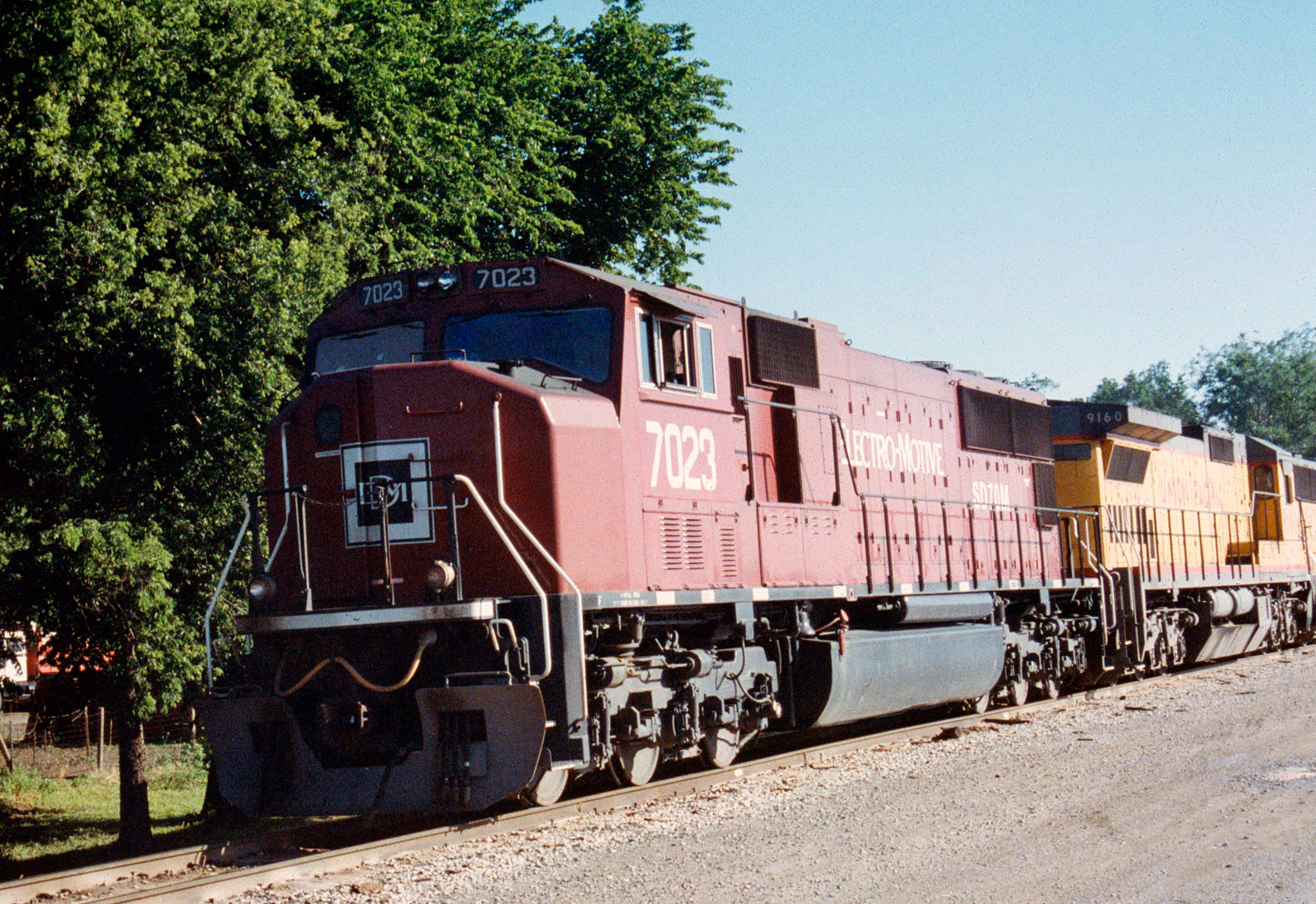 While the original SD70 model was only marginally successful (it only sold over 100 units) later releases, such as the SD70M, SD70MAC, and SD70I were extremely successful. Essentially there is little difference between the designs in terms of overall mechanics and layout.

The SD70M carries the new wide "safety" cab design (also sometimes called a comfort cab it is technically known as the North American Safety Cab) as the original SD70 was built with the Standard Cab purchased only by Norfolk Southern and Illinois Central (NS takes a particular liking to the Standard Cab and carries many in its fleet).

The SD70M has, by far been the most successful SD70 design with over 1,500 built, most of these for Union Pacific who purchased over 1,400 of them! 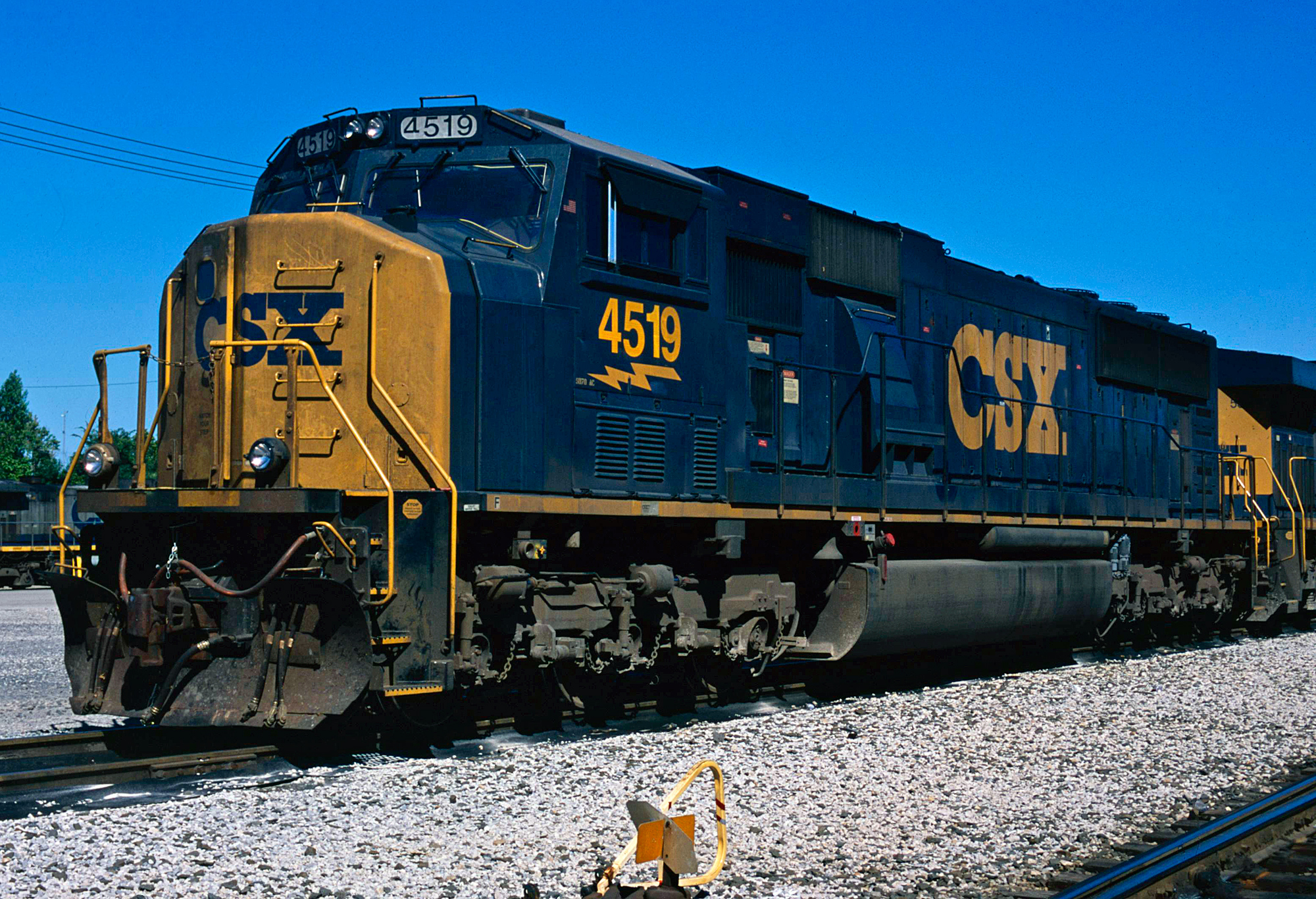 The SD70I is similar to the SD70M in that its differing feature involves the cab. The “I” designation refers to the unit having an isolated cab (EMD calls it the Whisper Cab) from the main prime mover and other mechanical gear. Extremely quiet the feature works quite well although only a few dozen were purchased, all by Canadian National.

Across the industry the most successful SD70 has been the SD70MAC. The MAC carries the same wide-cab design as the SD70M except that it also features AC (alternating current) traction motors.

Different from the traditional DC (direct current) traction motors AC is much more simple, reliable and easier to maintain albeit it costs far more.

This added cost, however, has not deterred railroads and over 1,000 have been built mostly for CSX and BNSF Railway (BNSF’s predecessor Burlington Northern also purchased a few hundred of them). 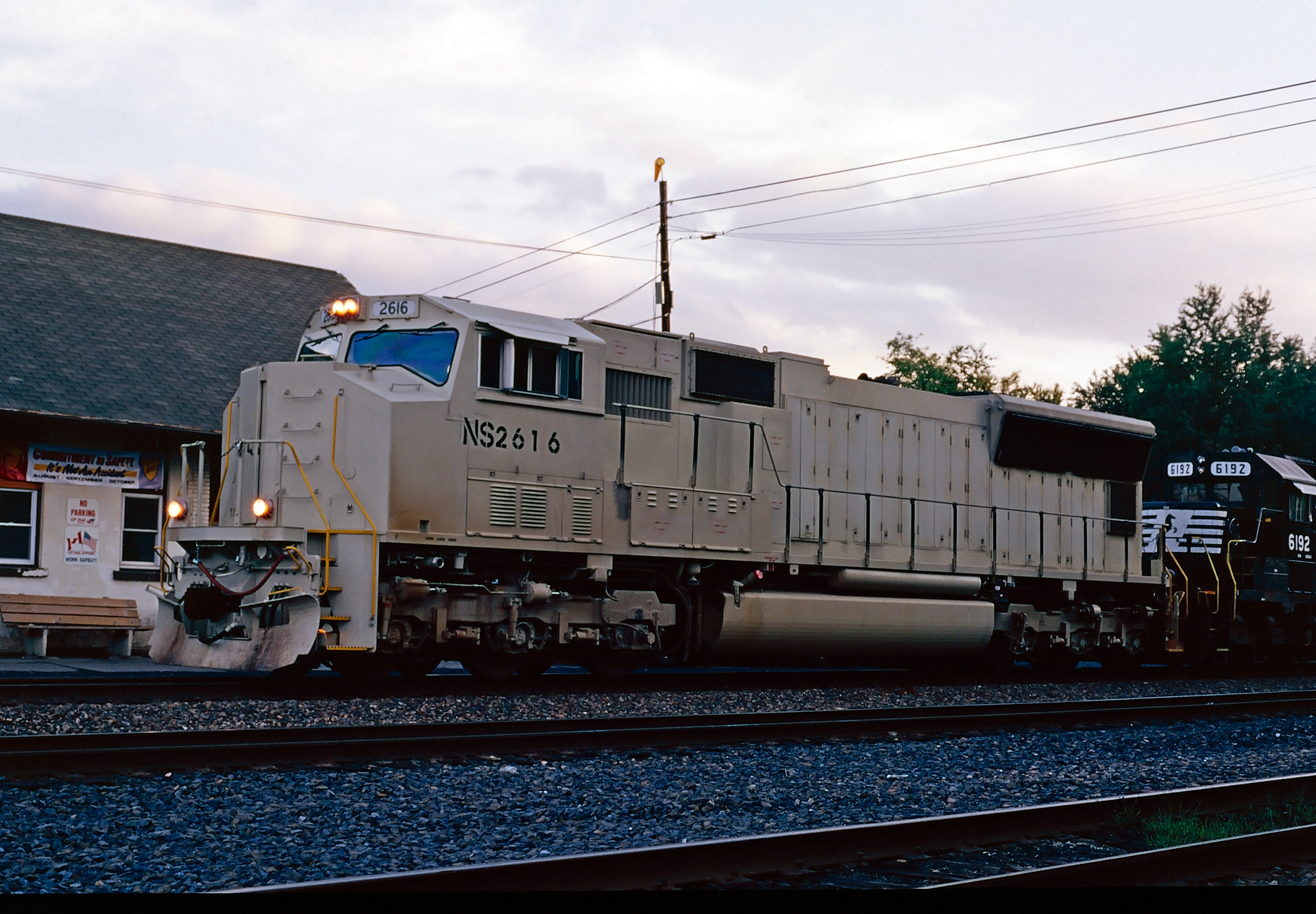 The newest release of the SD70 line is the SD70ACe (most in the industry simply call them SD70 "Ace" or "Aces"). Rated at 4,300 hp and carrying AC traction motors, looking similar to the SD80 and SD90 in terms of its flared rear radiator grill, the boxy-nosed unit is meant to comply with the EPA’s latest environmental regulations and since its debut in 2005 has been fairly successful with a few hundred of the units built to date. 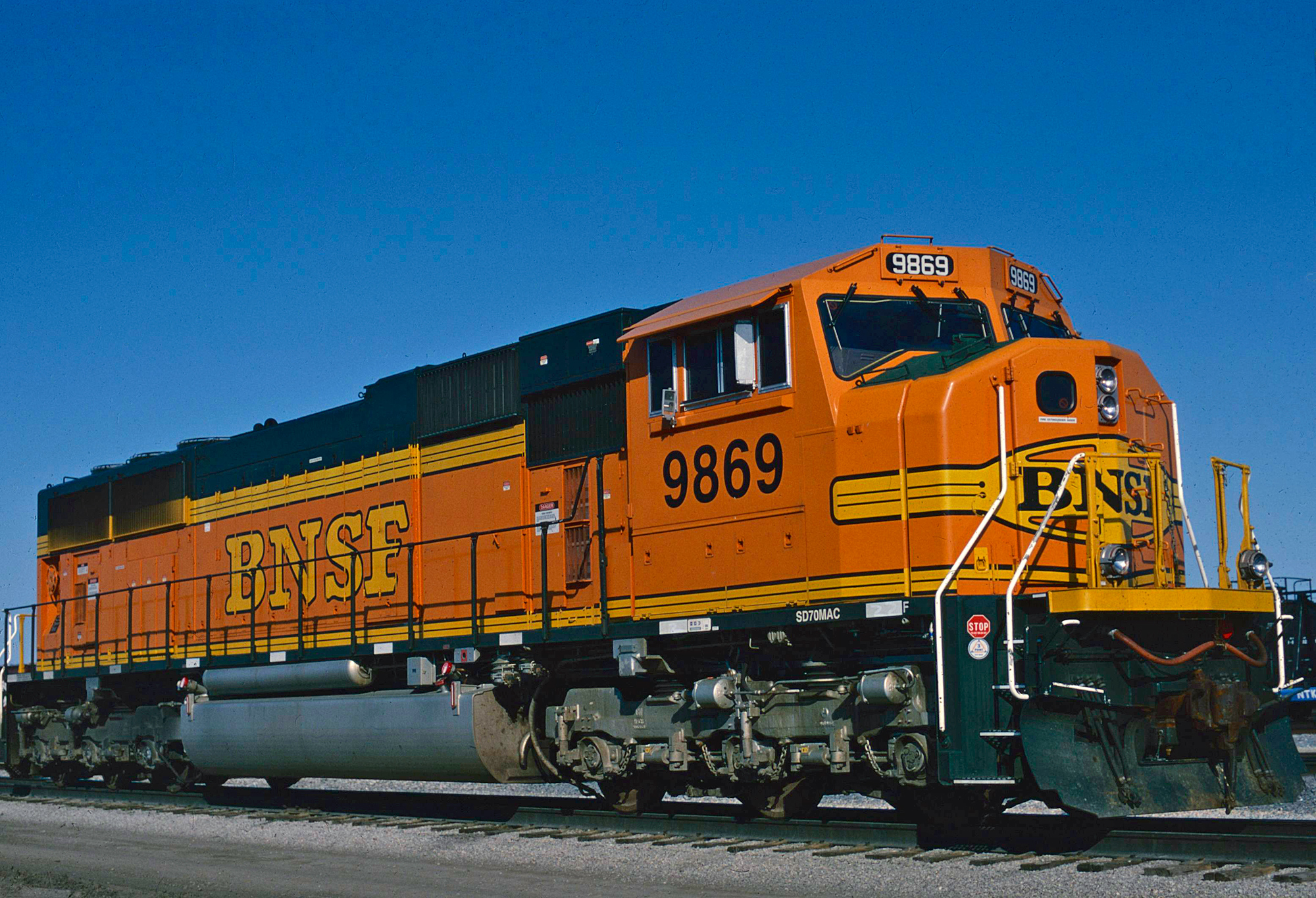 BNSF Railway SD70MAC #9869 was photographed here by Tom Farrell at Galesburg, Illinois on March 25, 2000. The unit was about two years old at the time. American-Rails.com collection.

Lastly there is also the SD70M-2 design, which looks virtually identical to the SD70ACe, and in reality is in virtually every way except for the name.

They are given the “Dash 2” designation simply to differentiate them from the SD70M model but aside from this are identical to their sister SD70ACe. Norfolk Southern is the largest purchaser of the unit (over 100) with Florida East Coast, CN and others chipping in with a few more. 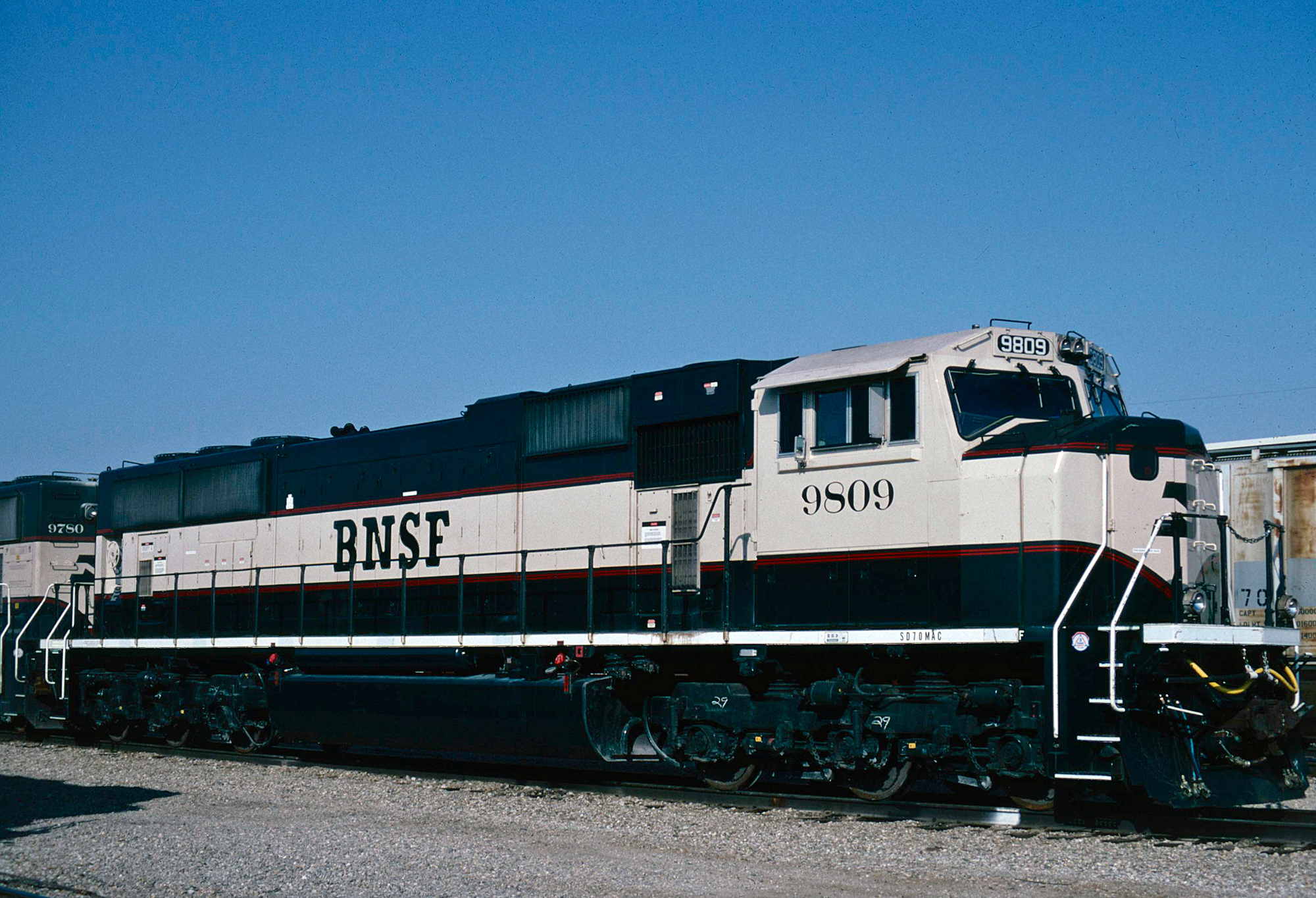 EMD has been very successful with the SD70 despite losing first place to GE and has now given their competitor stiff competition to its similar models the AC4400CW and new Evolution Series™.

Also, for information about Electro-Motive's Special Duty series please refer to the production rosters listed above.

In any event, while GE models are now as common as the SD40 series once was be on the lookout for the SD70 designs, there are plenty of them out there to spot, particularly the unique SD70ACe and SD70M-2s!