The SD90MAC was Electro-Motive's most powerful locomotive on a single frame. The model was developed after the company's successful SD70 line and cataloged by the builder at the same time as the less powerful SD80MAC (rated at 5,000 horsepower).

The mid-1990s were the era of the high horsepower race between EMD and General Electric, as each had been dueling for bragging rights dating back to the 1970s when GE finally came into its own as a locomotive builder.

Unfortunately, as their pace quickened proper development was allowed to slip to the point that neither the SD90MAC nor the AC6000CW were highly reliable locomotives. EMD's model.

In particular, it was plagued with reliability issues; so much so that the company abandoned the use of the H engine and reequipped with the locomotive with a more reliable prime mover.

Today, most of the original SD90MACs have either been retired, traded in, or rebuilt while SD9043MACs remain in regular use with various companies, particularly Union Pacific which continues to utilize some of the units. 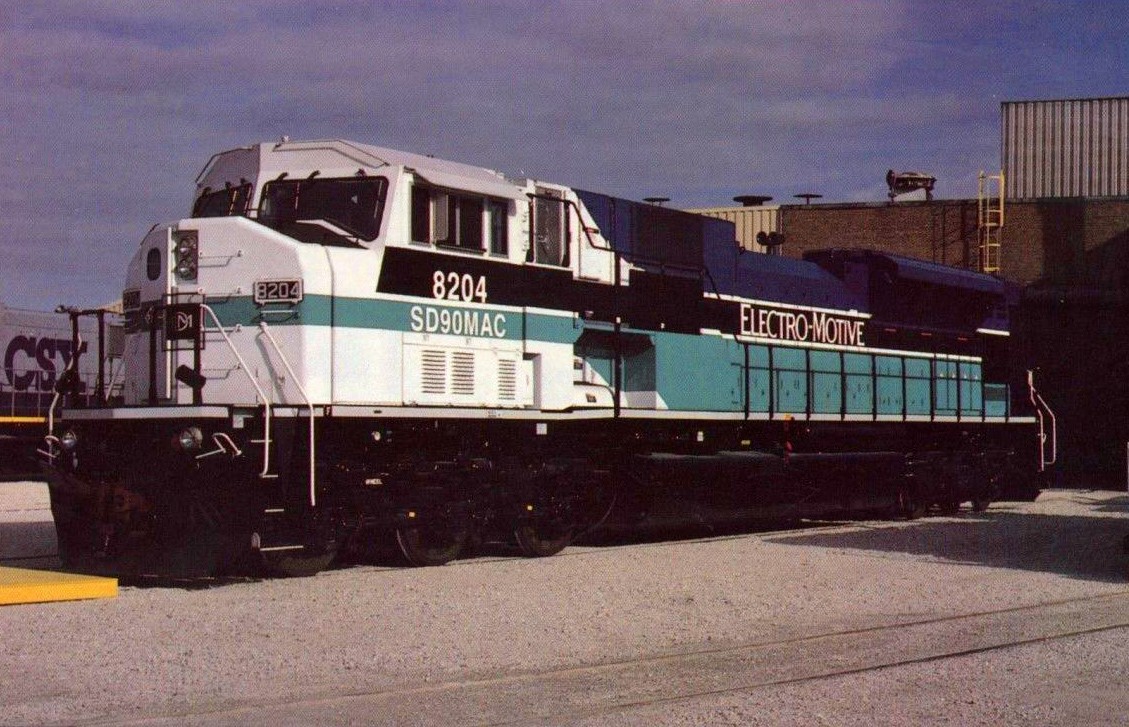 Electro-Motive SD90MAC #8204 (Union Pacific) wears its demonstrator livery as it sits on display at La Grange, Illinois for EMD's 75th Anniversary festivities on September 21, 1997. The locomotive carried the builder's new 16-cylinder, H-engine capable of producing 6,000 horsepower. Unfortunately, the unproven prime mover had a myriad of problems and forced EMD to replace it with the more reliable 710G engine. These units were designated as SD9043MAC's and spent many years in service on UP and Canadian Pacific, the only two buyers along with CIT Leasing. Ken Church photo.

The SD90MAC and it’s related models are, to date, the most powerful locomotive produced by EMD. The model hit the catalog in 1995 and EMD opted not to use its 16-cylinder 710G3B engine but the newly designed 16-cylinder H-engine (sometimes giving the model the name of SD90MAC-H), which allowed for the locomotive’s very powerful 6,000 horsepower.

Aside from the prime mover the SD90MAC was essentially the same as the SD70 series and SD80MAC (it was also the same length as the SD80MAC at just over 80 feet).

The '90MAC was so new when EMD first cataloged it that the 16-cylinder 265H engine it was designed to use was not even ready for production.

As such, the builder was forced to use the above mentioned 710G3B for a short time if railroads wanted or needed their orders in a hurry. These units were reclassified as the SD90-43MAC.

While the SD90-43MAC sold fairly well with Union Pacific, which purchased over 300 of them (it began receiving the locomotives in October, 1995), the original SD90MAC did very poorly mainly because the engine was not properly tested and was prone to constant mechanical trouble.

The original was also purchased by UP, along with Canadian Pacific and their total production ended at just 40 units. While over 400 units of the series have been produced (almost all of which are SD90-43MACs) the SD90MACs themselves were not well received by railroads because their lack of reliability and constant mechanical troubles (for instance, recently a set of SD90MACs went to work on the Appalachian & Ohio Railroad in central West Virginia only to be taken off the railroad due to mechanical problems). 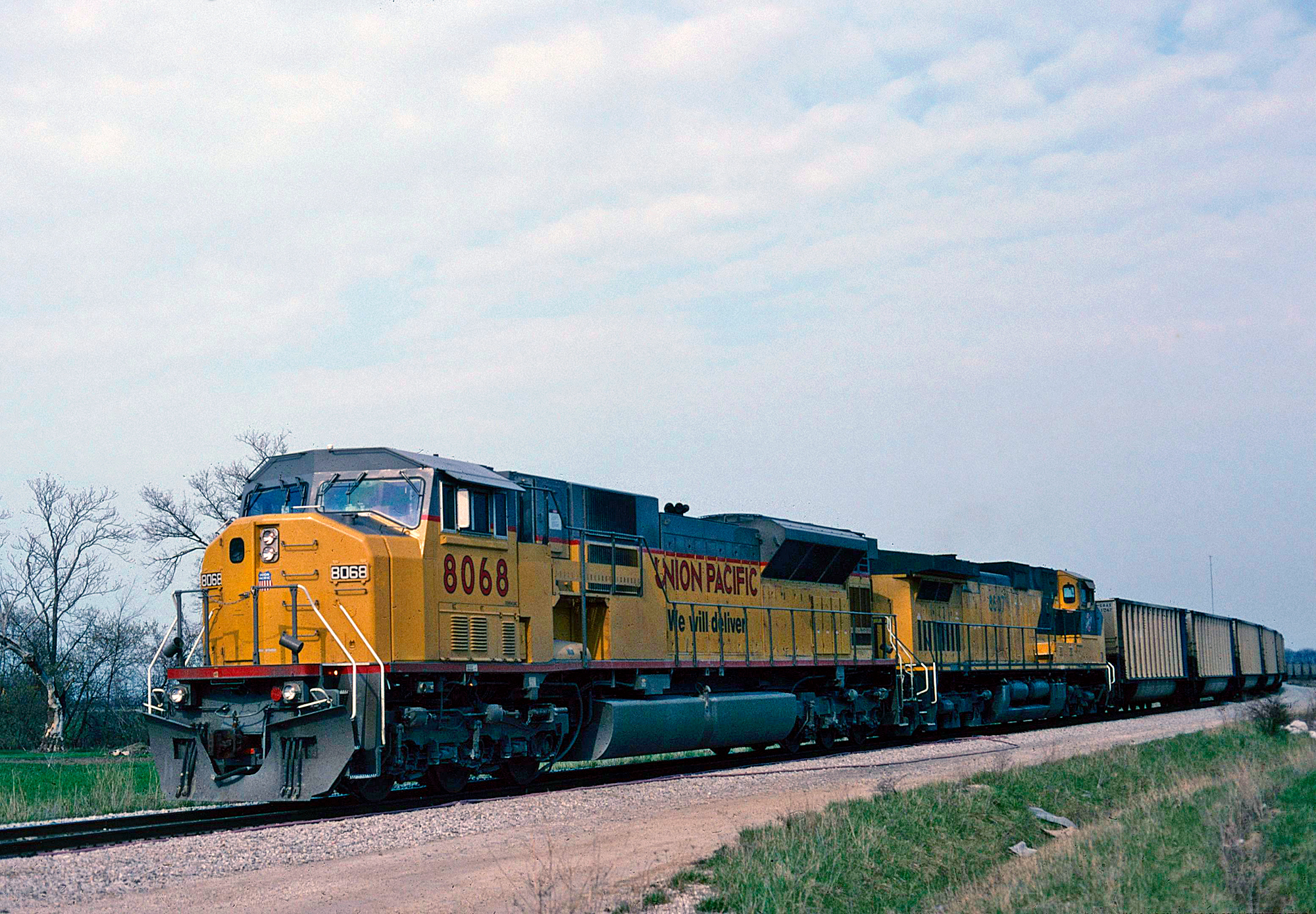 Union Pacific SD9043MAC #8068 and former Chicago & North Western C44-9W #8607 have a string of gondolas on the Norfolk Southern at Oregon, Ohio (near Toledo) in May, 1997. KJ Endriss photo. American-Rails.com collection.

Perhaps the only bright spot of the SD90MAC was that it featured EMD's highly successful HTCR-II truck (high-traction, six-axle, radial), which could steer itself into oncoming curves instead of just following the rail which greatly reduced wear to both rail and truck/axle components.

These locomotives were all built November, 1999 and February, 2000.  These is a slight variation with the original SD90MACs in that early versions featured a Phase I safety cab while later models were equipped with the Phase II design that allowed for better visibility, which located the train crew higher off the ground.

The SD90MAC's also offered the highest tractive efforts of EMD model aside from the experimental "DD" series; 200,000 pounds starting effort and 137,000 pounds continuous.

* This testbed model featured a 265H engine, de-rated to 12 cylinders and boasted 4,300 horsepower.  It was ultimately never sold. 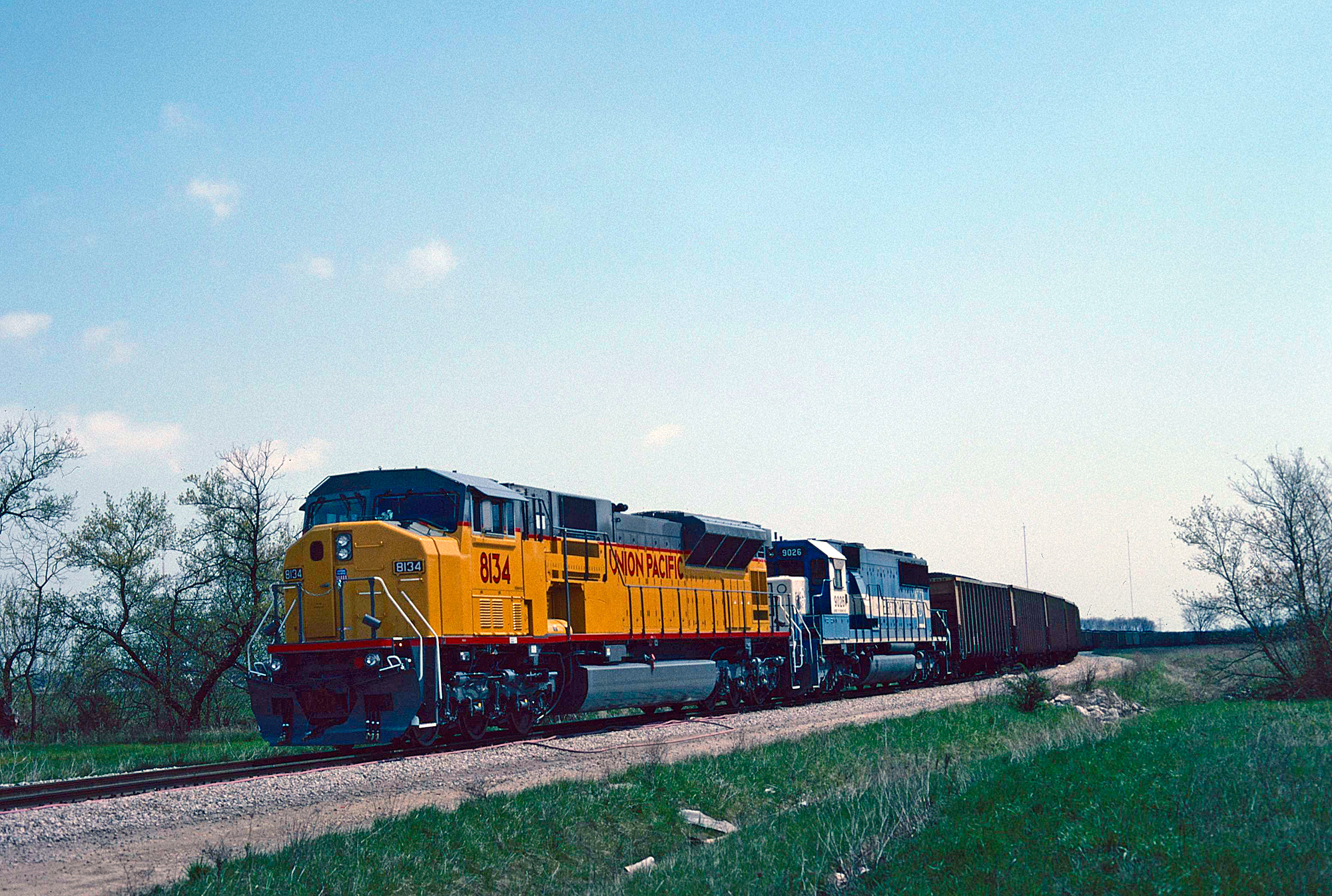 While GE's version, the AC6000CW also had reliability issues, its problems where not nearly as magnified as the SD90MAC.

The designation of the SD90's "MAC" is as follows; the "M" was EMD's designation for the wide, safety cab the locomotive featured while the "AC" regarded the alternator that it featured allowing for increased tractive effort, the model TA22CA8.

For railroads, the horsepower race between GE and EMD was a learning lesson that highly powerful, single locomotives is not always a good thing even if they are reliable due to the fact that if a unit goes down so does most of your train's power supply. As such, today the generally accepted horsepower rating for locomotives is between 4,000 to 4,500.