The E5 was a variant of Electro-Motive's passenger line produced specifically for the Chicago, Burlington & Quincy or its subsidiaries.

Internally, it was virtually identical to every other E model save for its relatively new GM prime mover. Externally, the only significant change from previous designs then cataloged was the addition of fluted stainless steel, a trademark of both the Burlington's passenger trains and the Budd Company. 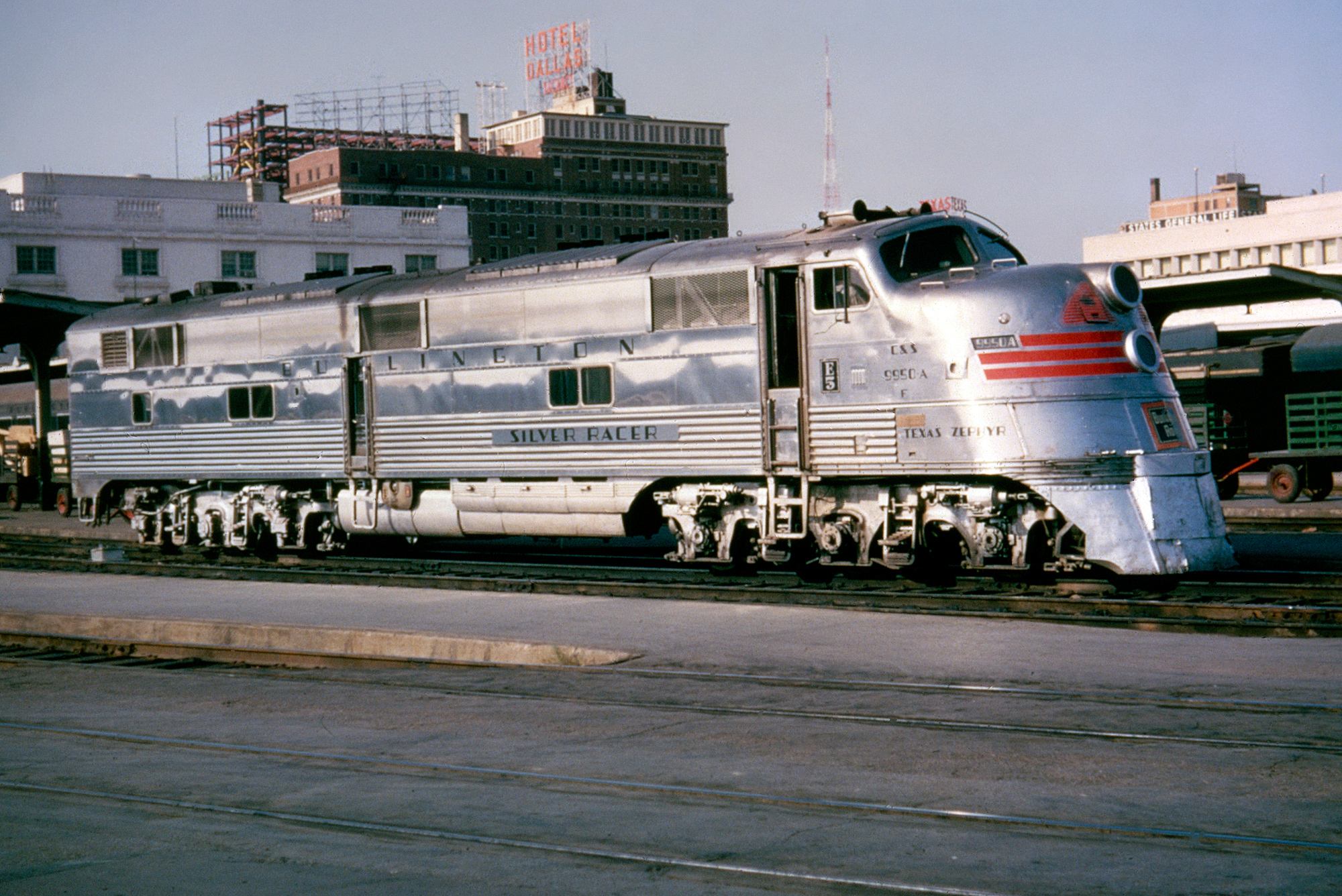 Chicago, Burlington & Quincy (Colorado & Southern) E5A #9950-A, named the "Silver Racer" and one of the lead units for the "Texas Zephyr," is seen here at Dallas Union Station during the 1950s. American-Rails.com collection.

Internally, the E5 was virtually identical to its future cousin, the E6.  It carried two 567 prime movers capable of a combined 2,000 horsepower and A1A-A1A trucks.

It featured a few ornamental differences, most notably fluted stainless steel to match the Budd Company equipment.  Today, #9911A (the Silver Pilot) is preserved and operable at the Illinois Railway Museum, using an original consist of equipment. 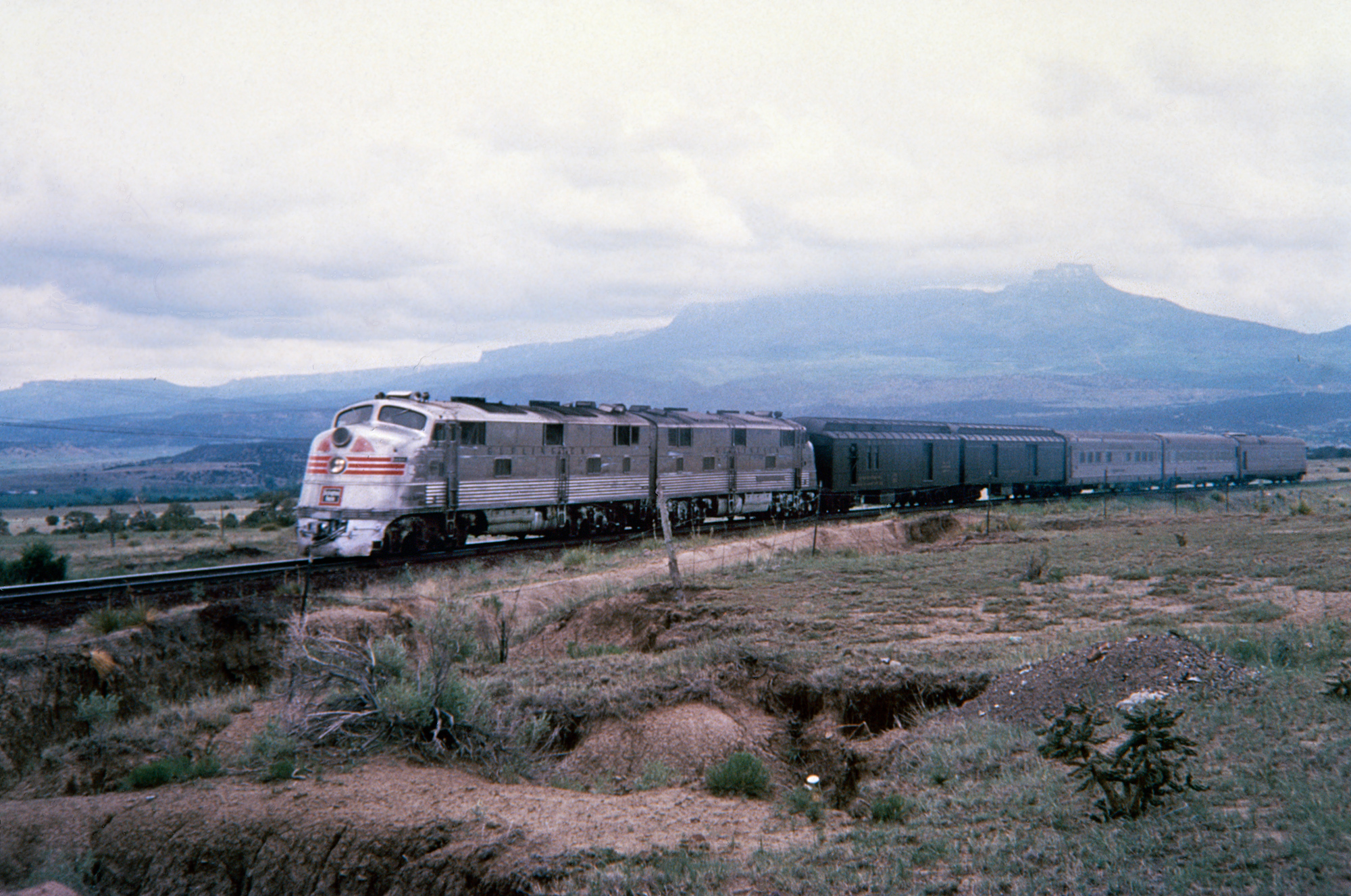 A pair of Burlington E5A's have the northbound "Texas Zephyr" just north of Trinidad, Colorado. Based on the paltry consist, this scene was probably taken in the mid-1960s, shortly before the train was discontinued. American-Rails.com collection.

The E5 began production in early 1940. It was ordered by the CB&Q to power the railroad's new Zephyr passenger train fleet which included names like the Afternoon Zephyr, Morning Zephyr, Nebraska Zephyr, Ak-Sar-Ben Zephyr, and the American Royal Zephyr.

Once again, EMC gave the E5 a "slant nose" design, commonly used on the E3 and E4, which disappeared entirely following the E6 as both E and F models used the classic "bulldog" design. 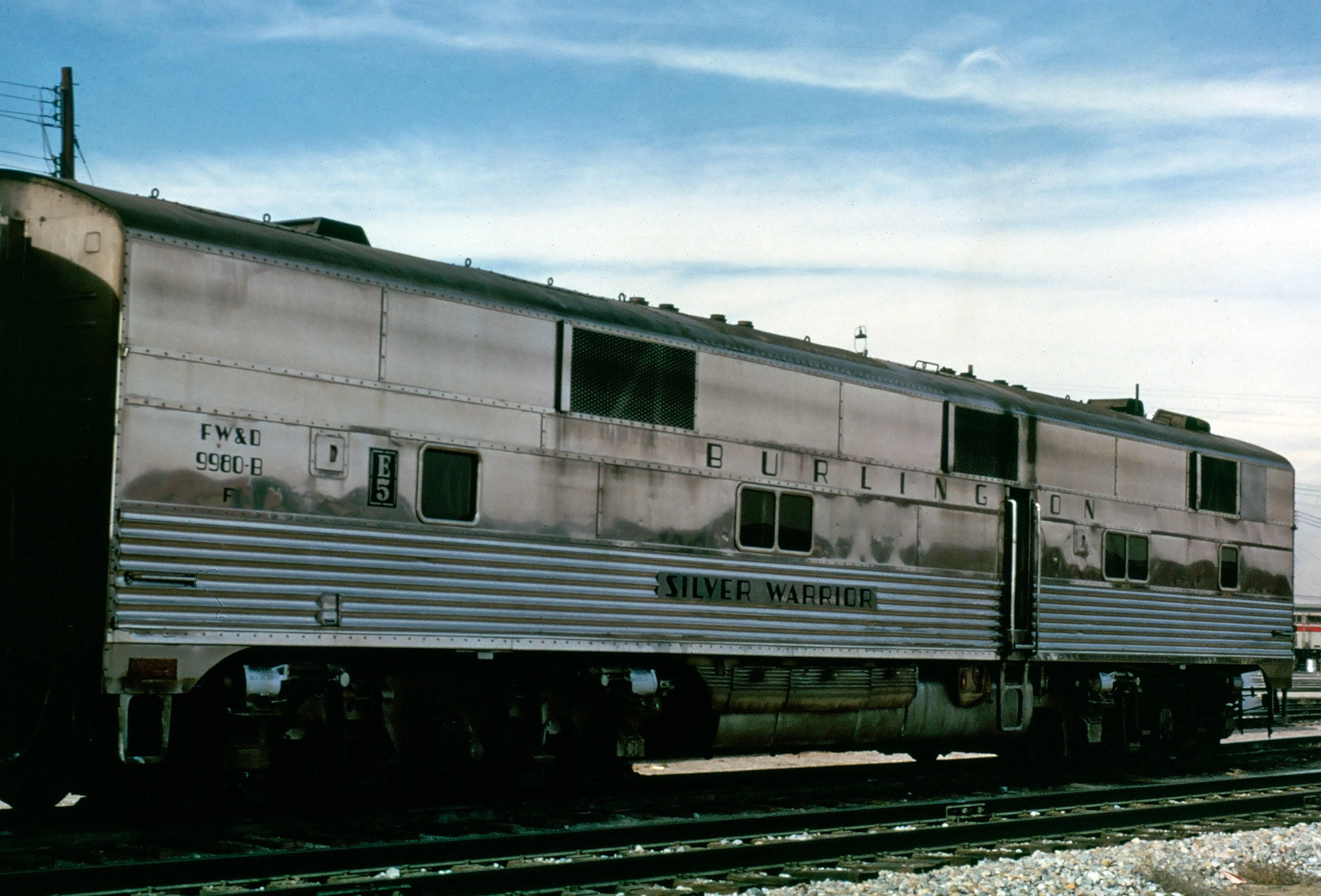 Production of the EMC E5 ran through mid-1941 and although the design was manufactured for over a year only 11 E5As and 5 E5Bs were built. 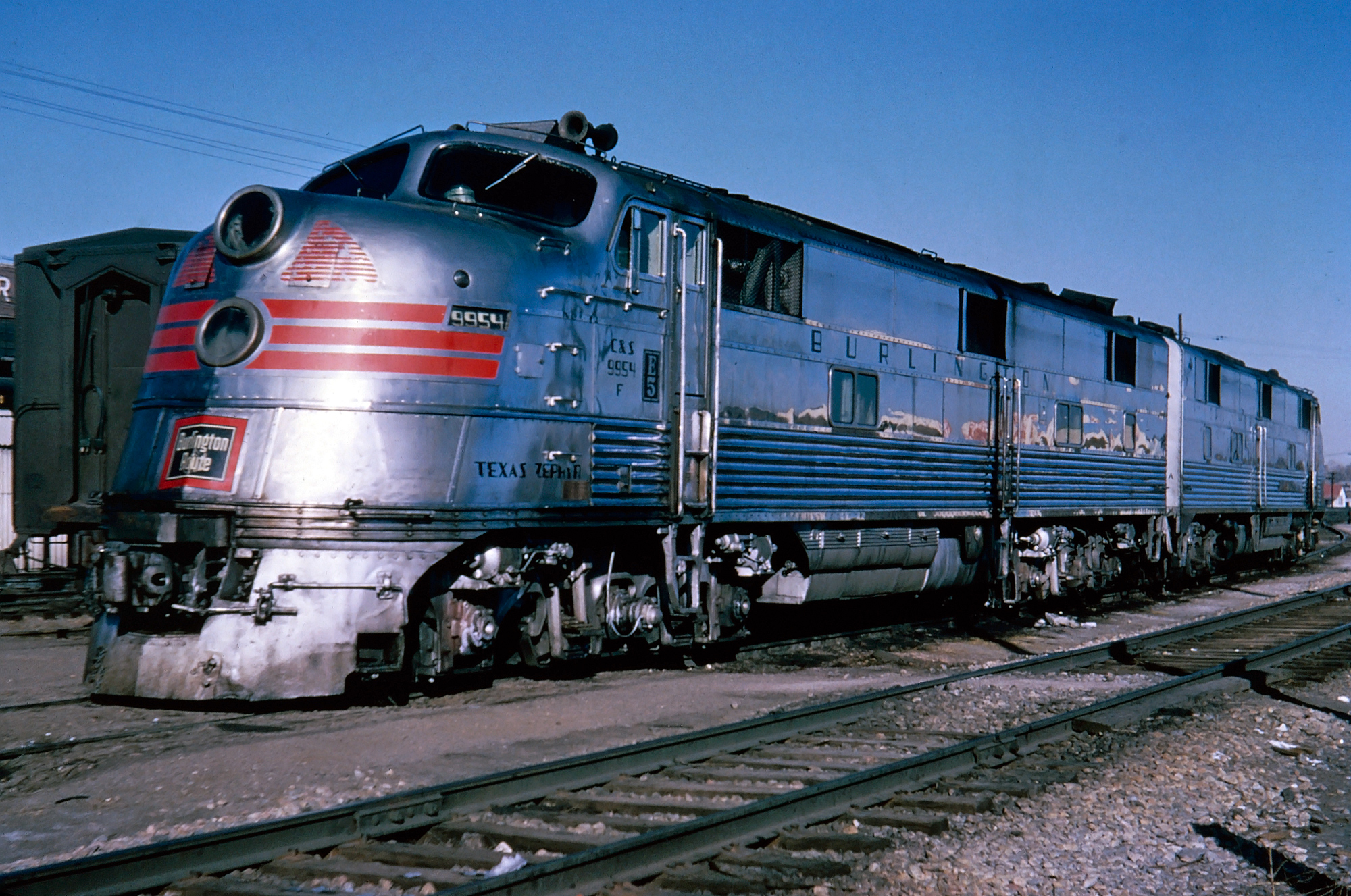 The Burlington apparently really liked their E5s as they remained in service all of the way through the 1960s although some units were retired prior to that time.

In many ways, the E5 was simply a variant design as the company had already began production on the E6 in 1939 that coincided with the release of its publicly successful FT model used in freight service.

The E6 sold more than 100 A an B units and the following E7 and E8 designs outshopped more than 1,000 altogether. 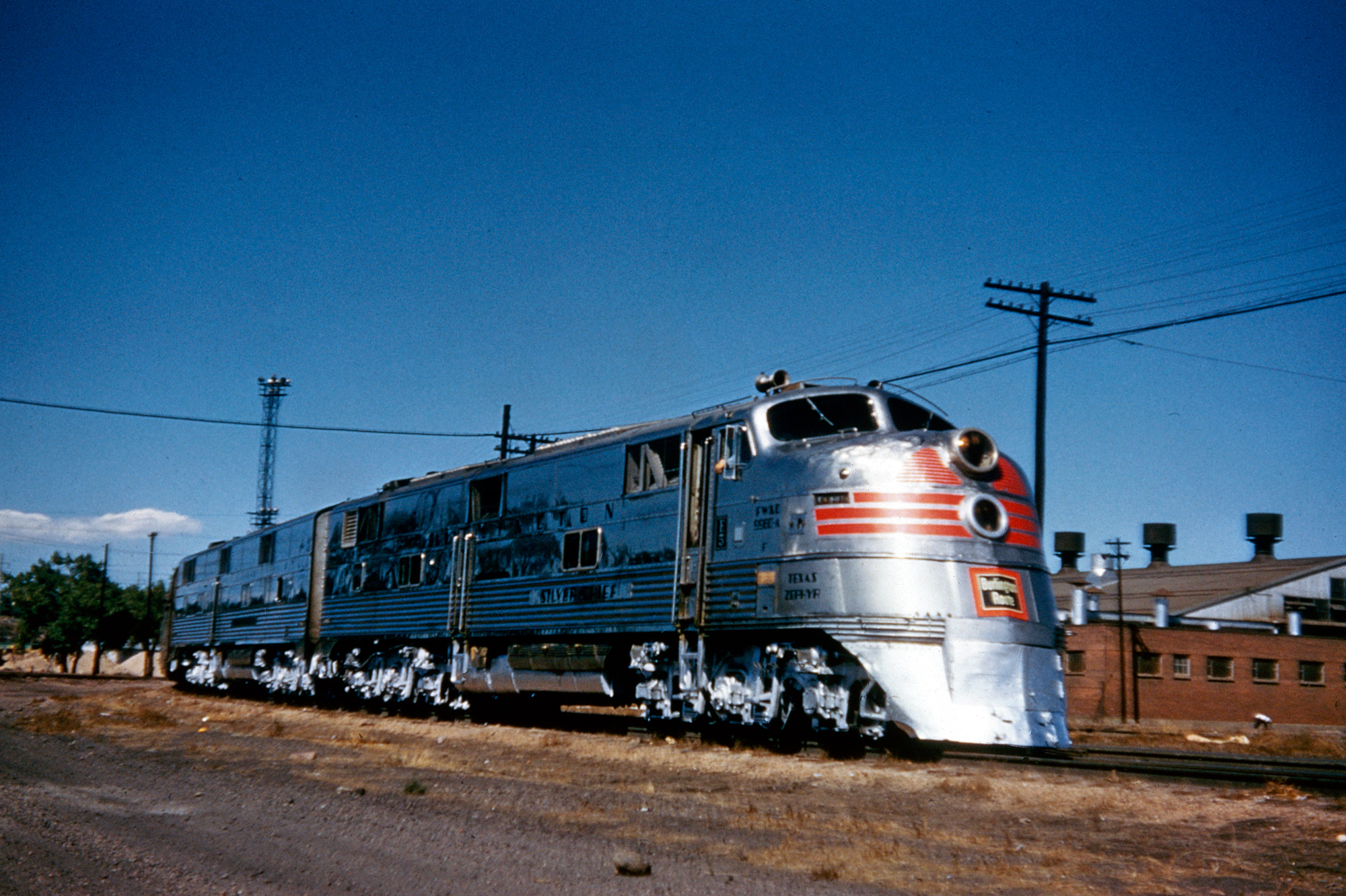 Chicago, Burlington & Quincy E5A #9980-A, named the "Silver Chief," has the "Texas Zephyr" in Fort Worth, Texas during the 1950s. American-Rails.com collection.

By the time the war had ended EMD was fully entrenched as the leader of the diesel locomotive market pulling away from the American Locomotive Company whose beautiful but mechanically trouble-prone PA fell behind the E series in sales and interest.

General Motors' subsidiary would soon begin to dominate the industry by the 1950s releasing models like the GP7 and GP9.

In any event, as mentioned above one of these beautiful locomotives was preserved, #9911A, which resides at the Illinois Railway Museum. It is occasionally operates and has even been featured in movies (notably "A League of Their Own" and "Flags of Our Fathers").