The AB6 was a specially built version of its E6 model diesel locomotive. It was designed in the early 1940s for the Chicago, Rock Island & Pacific (the Rock Island) which had a specific plan for the locomotive.

The railroad hoped to modify a cabless E6 "B" unit and convert it into a stand-alone locomotive for use in passenger service powering the Rocky Mountain Rocket.

Years later the Chicago & North Western Railway would construct a similarly designed unit based from E8Bs and E9Bs.

However, the C&NW's models were home-built and the Rock Island had theirs constructed by Electro-Motive itself. The odd looking AB6 with its boxcab-like appearance proved successful and actually saw many years of service on the Rock Island.

After it was bumped from use on the Rock's intercity trains it was rebuilt for use in commuter operations where it saw many more years of service before finally being retired in the 1970s.

Unfortunately, neither example of this unique locomotive, the only factory-produced locomotive featuring a blunt-end cab, was saved (alas, Rock Island's financial situation precluded it from donating many locomotives for preservation). 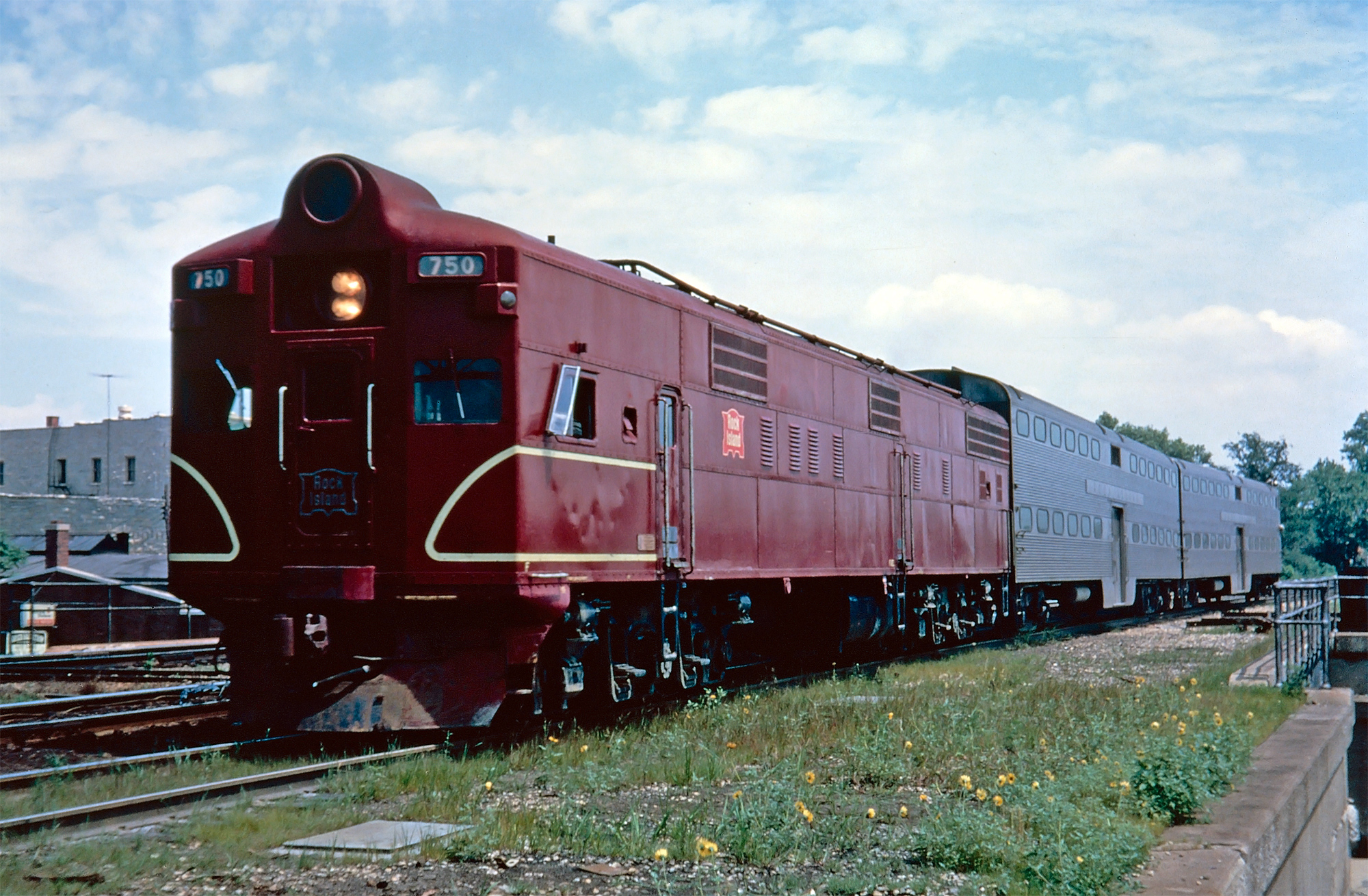 During the late 1930s and early 1940s the transition from steam to diesel power for main line purposes was only in its very early stages.

The Electro-Motive Corporation (EMC) had introduced its streamlined EA model for passenger service in 1937 and then awed the railroad industry two years later when the FT freight diesels toured the country in 1939.

This four-set, A-B-B-A tandem listed as demonstrator #103 could produce a combined horsepower of 5,400 and showed the limitations of steam while proclaiming the superiority of diesel.

So, when the Rock Island requested a unique spin on an E6B model that resulted in the rare EMC AB6, railroads were still under the steam era mindset of customizing locomotives to their individual needs but also clearly recognized the importance diesels would now play.

In later years Electro-Motive mostly ended this practice by declining such customized requests but during its early years of needing business the company relented somewhat.

For the Rock Island its hope in the AB6 was to have it be something like a more powerful Doodlebug by having a retrofitted cab and control stand equipped on one end so the unit would be a self-contained locomotive.

Its purpose for the model was to use it on its flagship Rocky Mountain Rocket which had a split schedule west of Limon, Colorado. From that point some of the train headed due west to Denver while the rest went southwest to Colorado Springs.

The Rock wanted an individual locomotive that could blend in as a B unit between Chicago and Limon but then operate independently for the rest of its journey, thus saving the company the need for extra power and retaining the trains streamlined appearance.

Additionally, the unit could be lightly powered itself since it almost always would be pulling just a few cars to whichever destination it was headed.

What resulted was the EMC AB6. The boxcab locomotive had just ever so conservative streamlining applied to the cab area (essentially only beveling) with a centered headlight above.

The original E6 models featured two 12-cylinder model 567 prime movers that could produce 1,000 horsepower each. Electro-Motive removed the rear engine, however, and added a baggage compartment that way such a facility would still be available after the train split at Limon.

The first two units arrived on the CRI&P in June of 1940, #750-751 sporting the company's beautiful passenger livery of two-tone red with stainless steel.

Interestingly, the tandem proved to be the only two the Rock Island would own. This may partly be due to the fact that a year later the United States entered World War II and severe restrictions were placed on new diesel locomotive orders.

In any event, when the war ended instead of purchasing more EMC AB6s the railroad opted to purchase standard E units, in this case E7As and E7Bs between 1946 and 1948 totaling 11 each (22 combined).

In 1949 they would also place an order for fourteen new E8As. After the start of the war the Rock, and the railroad industry in general, began to see an incredible demand in the movement of both passengers/troops and freight. As a result the AB6s began to see longer trains and thus needed more power.

This resulted in the locomotives being sent back to Electro-Motive to have the 1,000 horsepower prime mover replaced in the rear area where the baggage compartment had been and thus gave the locomotive enough horsepower to handle the extra cars.

In the 1960s the two AB6s were given a new livery of solid, crimson red. Also around this time, in 1965, the Rock Island pulled their steam generators and replaced these with more reliable and efficient electrical head-end power (HEP) for use in push-pull commuter service along the railroad's Chicago lines.

* An additional 1,000 horsepower, 567 power plant (12-cylinder) was included.  Also, in 1965 the steam generators were removed and replaced with lighting generators for Chicago push-pull suburban service.

Here the units performed quite admirably for nearly another decade and they could be seen on a daily basis with most locals barely giving the unique pair more than a second glance.

Even featuring an all-red paint scheme the AB6s still looked very classy matched up with the Rock's double-decked stainless-steel commuter cars (in their final form during the late 1960s the AB6s showcased a deep crimson with a yellow nose).

Finally, after more than three decades of service the CRI&P scrapped the pair around 1974, precluding the possibility of retaining even one for historical purposes.