The Adirondack Railroad, formerly known as the Adirondack Scenic Railroad (reporting marks, ADIX), has an interesting and happy history.

Its humble beginnings date back to 1992 when the Adirondack Railway Preservation Society was started by a group of railfans to reopen a section of former New York Central trackage in upstate New York.

Their plan was to start a small tourist railroad of just four miles between Thendara to Minnehaha.

With the approval of the State of New York work commenced and within a few years had enough patronage and support that the state has since allowed them to continue operating their trains every year!

Additionally, they hope to one day completely restore the entire NYC branch, which is more than 100 miles in length although that goal may be some years into the future, if it ever does happen. 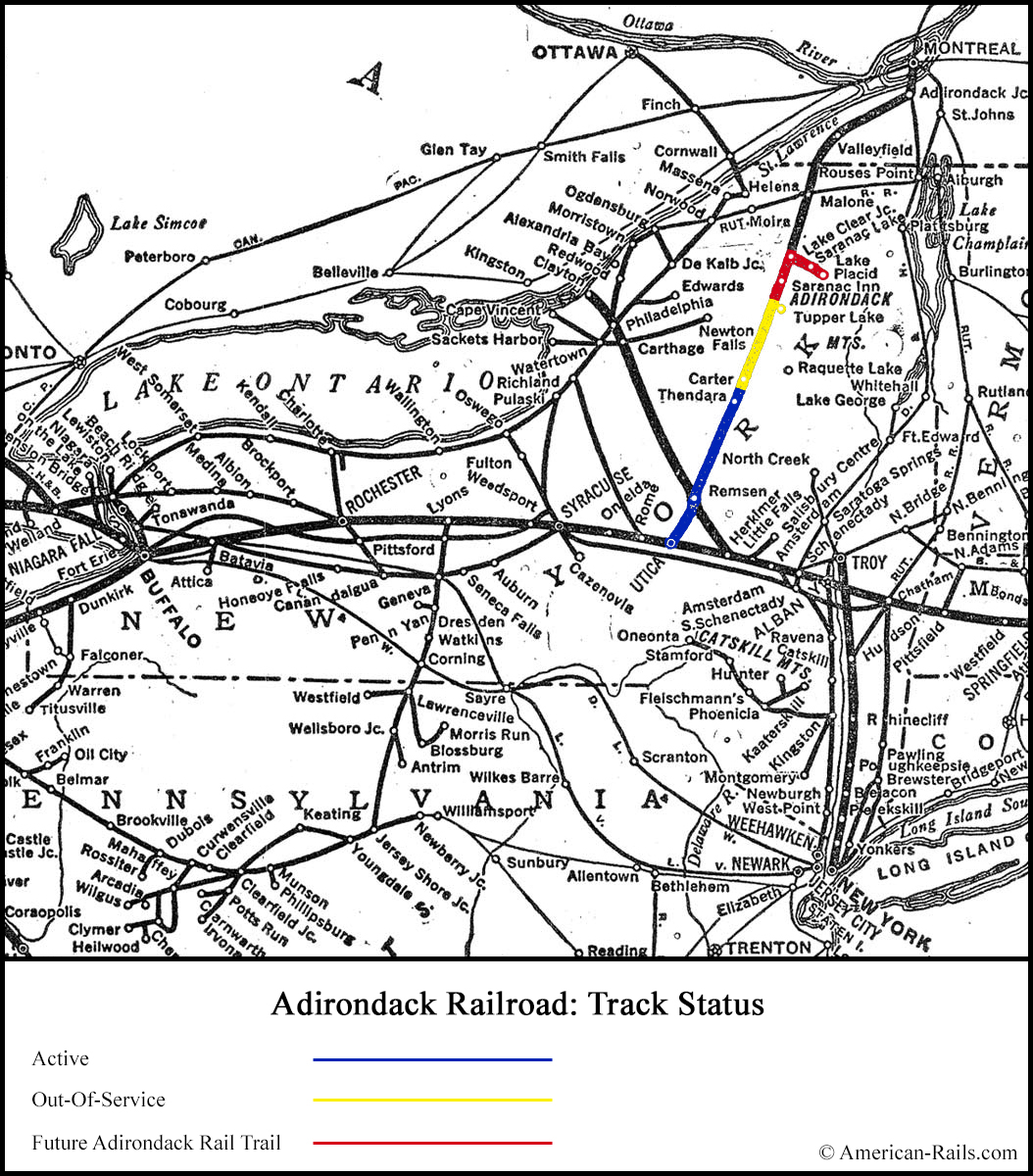 An Adirondack Railroad route map showing active lines, the out-of-service section, and the northern component due to become a rail trail. Author's work.

Since their first trip in 1992 the railroad has grown by leaps and bounds, literally.

Today, it operates two, unconnected sections of this former New York Central's Adirondack Division that once extended from Utica all of the way to Lake Placid to the north, a distance of over 150 miles.

Their operations include a short 10-mile section of railroad between Saranac Lake and Lake Placid, and another 50-mile section between the town of Utica and Thendara, where it all began.

Plans for the railroad include hopefully reopening the section between Thendara and Saranac Lake, a nearly 100-mile stretch of railroad that operates through New York's breathtaking Adirondack Park.

Still, today you can still glimpse the park aboard the railroad from its operations around Saranac Lake and about half of its route to Thendara.

While the railroad does not operate any nostalgic steam locomotives it does provide you with cozy climate-controlled passenger cars.

The Adirondack also offers several different special excursion trains throughout the year including their Wine Train, The Polar Express during the holidays, Halloween Trains, and even the very popular Murder Mystery trains!

In the 30 years since the Adirondack Railroad began from virtually nothing but a dream it has grown immensely in that time.

What’s more is that the railroad has gotten local towns involved along its route and several have either restored their original, still-standing depots or elected to rebuild replicas of those torn down!

The Adirondack Railroad has become a very popular tourist railroad and has been featured in a number of national publications, including Trains.

Alas, it appears the railroad's efforts to fully restore the corridor between Utica and Lake Placid will not occur.

After a protracted legal battle, in which the railroad ironically was successfully, the state of Ne York still plans to convert the 34-mile section from Tupper Lake-Lake Placid into yet another rail trail.

Even so, the Adirondack Railroad still rivals some of America's greatest scenic line like the Strasburg Railroad and Durango & Silverton Narrow-Gauge.

Regardless of having no steam locomotives the railroad is home to a nice collection of diesel locomotives, one of which is an original New York Central unit. Below is a roster of the Adirondack Railroad:

It includes much more information than I have listed here, which is mostly just a brief overview and history of their operation.

For instance, their site includes an annual schedule, directions to their train, and special events that they host throughout the year among other things. So, be sure and check it out!

In all, for a fabulous trip by train on a super-scenic route in climate-controlled cars, a ride on the Adirondack Scenic is definitely something not to be missed if you have the chance.

And, if you have time consider becoming a volunteer to help them in their effort to not only restore the track all of the way to Lake Placid but also keep their equipment and current railroad in good working order, they would certainly very much appreciate the help.