The Afternoon Hiawatha was the Milwaukee Road's original Hiawatha, launched in the mid-1930s, renamed after another train was added to the popular Chicago to Twin Cities corridor.

The company certainly hit a home run with this streamliner, the third to initiate service behind the Burlington and Chicago & North Western but arguably the most impressive.

The Afternoon Hi carried on much as it had before the name change, departing Chicago and Minneapolis after lunch and retaining its original numbers.  At first it continued running with steam power but by the early 1940s, and particularly after the war, utilized the tried and proven diesel.

As the 1950s crept forward the Milwaukee witnessed ridership slowly slide away and by the 1960s it was clear any hope of sustained patronage had long since passed.  The railroad was able to discontinue the Afternoon Hi during the late 1960s. 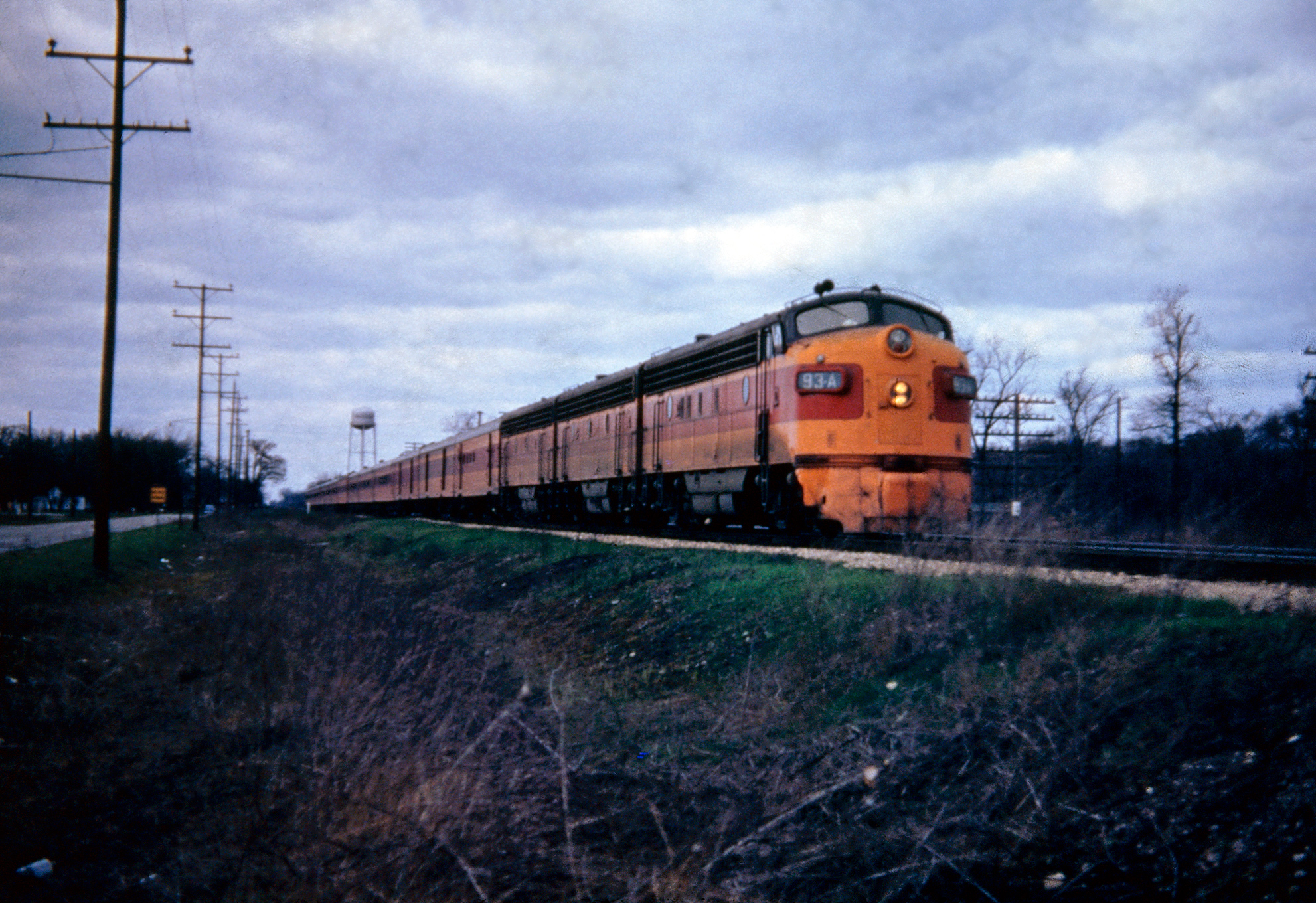 The former is particularly noteworthy; Mr. Scribbins worked at the Milwaukee Road for nearly three decades and provides an incredibly in-depth look at the company's fabled streamliner fleet.  In any event, both books do far, far more in covering these fine trains than I ever could in this brief article.

With that said an expanded, general overview of the Afternoon Hiawatha will attempted to be included here, hopefully without boring the reader to a greater extent.  The Milwaukee Road's Hiawathas gained their name from a poem by Henry Wadsworth Longfellow, which was often used by the company's publicity department.

Swift of foot was Hiawatha,

He could shoot an arrow from him,

And run forward with such fleetness,

That the arrow fell behind him!

When streamliner fervor hit the nation in February of 1934 with Union Pacific's M-10000 trainset and then saw even more excitement a few months later during the unveiling of Burlington's Zephyr 9900, the Milwaukee Road closely watched these events.

Anticipating the launch of its own streamliner the company spent much of 1934 upgrading its Chicago-Twin Cities main line for faster running times (in an agreement with the Chicago & North Western service between Chicago-Milwaukee was cut to 90 minutes) and introducing new lightweight cars built at its Milwaukee shops designed by Karl F. Nystrom (interior work was done by Mashall Field & Company).

In August word came out about further service improvements; the Milwaukee, C&NW, and Burlington would reduce running times between Chicago and the Twin Cities from 10 to 6.5 hours. 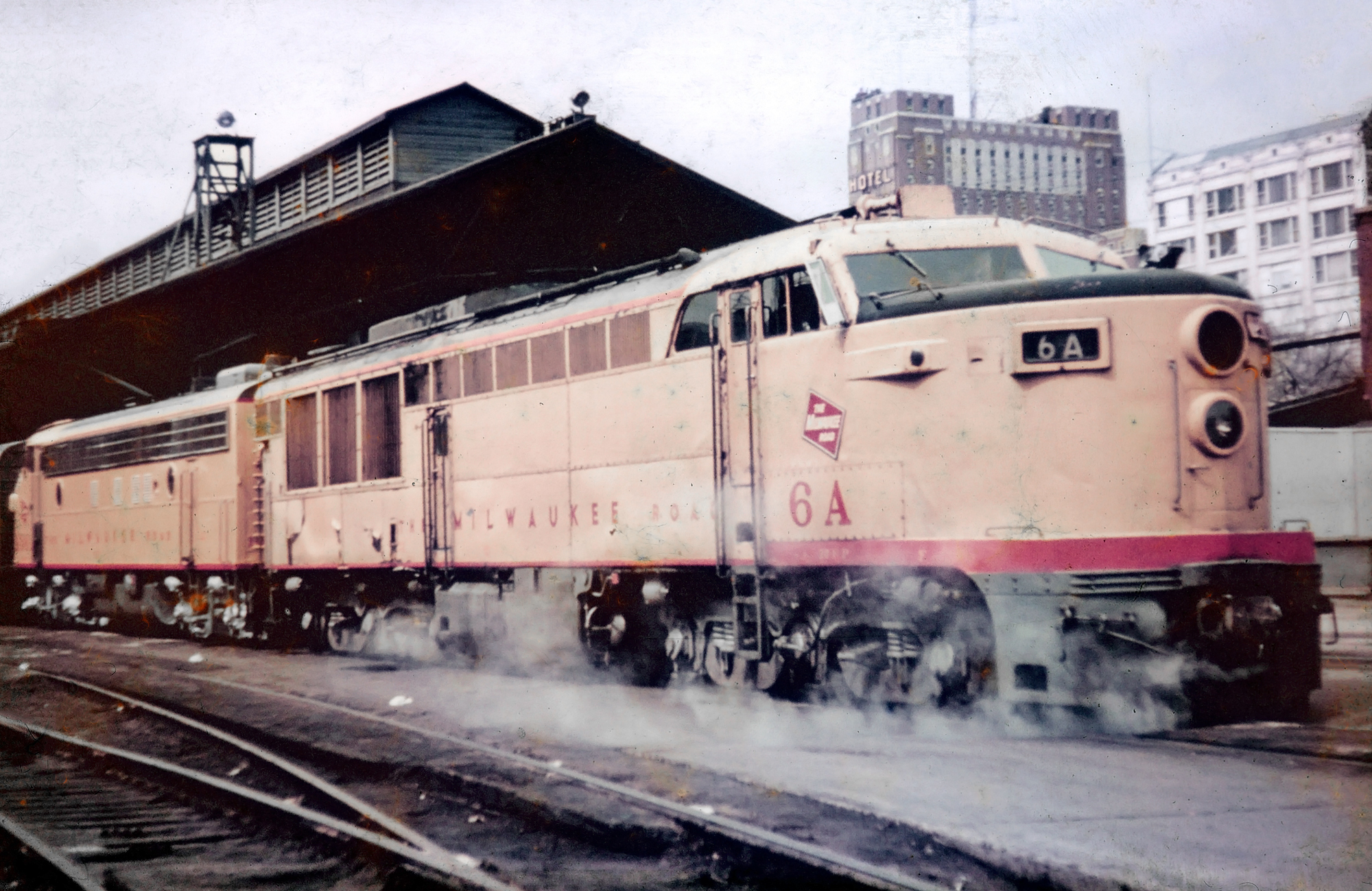 Nearing the end of its career, a Milwaukee Road "Erie Built," #6-A, has a regional "Hiawatha" consist at Milwaukee, Wisconsin in May, 1961. Fred Byerly photo. American-Rails.com collection.

For the most part, however, the Milwaukee remained hushed about its intentions although speculation was rampant as signs pointed to something in the works.   Despite all of its secretive efforts, however, it became clear the company was anticipating something big.

These rumors were further confirmed when it was learned two special, streamlined 4-4-2 "Atlantics" had been ordered from the American Locomotive Company in the fall of 1934.  In early 1935 both the C&NW and Burlington officially unveiled their new services; the former launched its "400" on January 2nd and the latter its Zephyr on April 21st.

No one yet knew it (except those at the top) but the Milwaukee was not far behind.  Between May 5th and May 8th the new Atlantics arrived in Chicago, #1 and #2.  Within a week the railroad began official tests with the locomotives, wanting to learn just how fast they could comfortably operate. 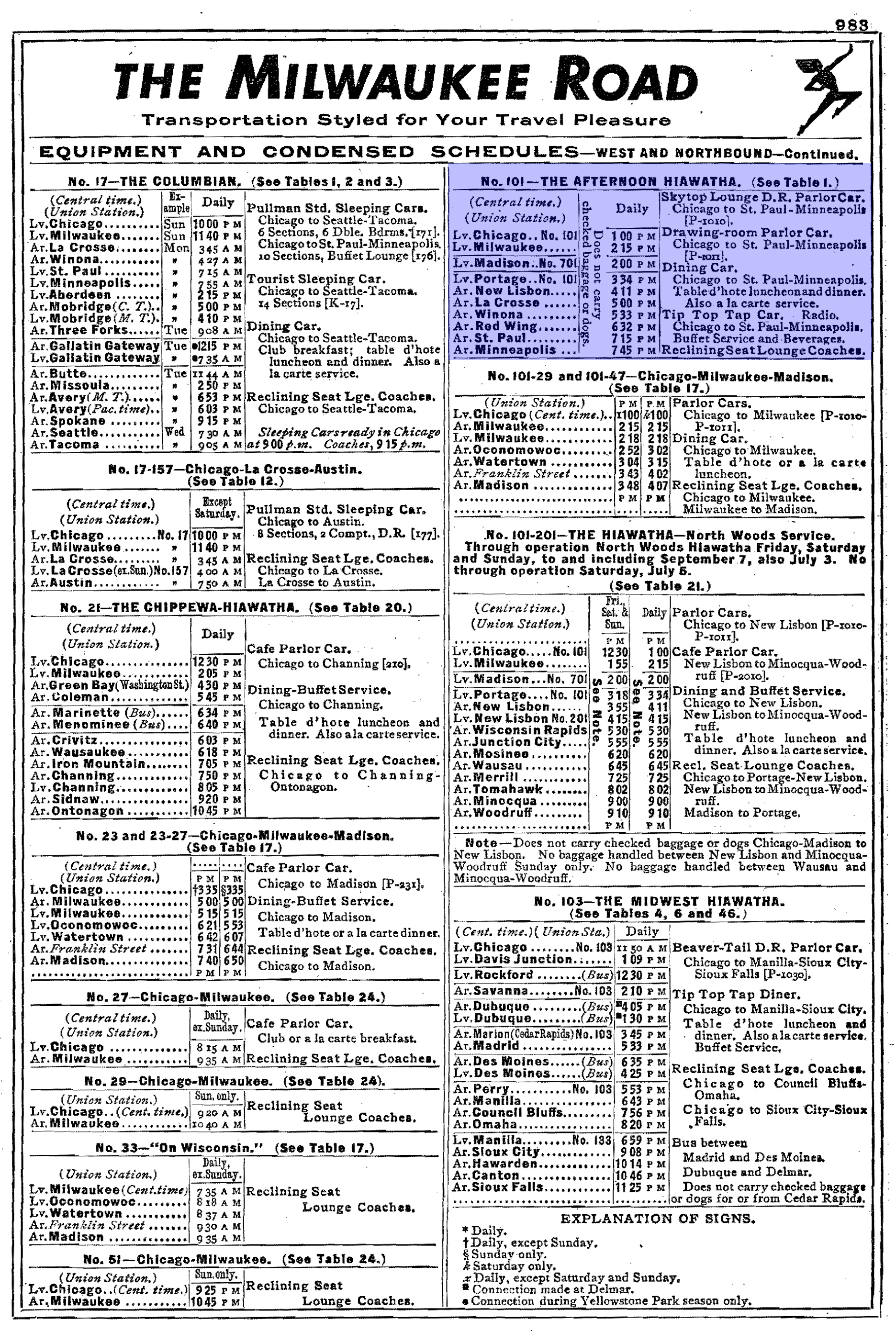 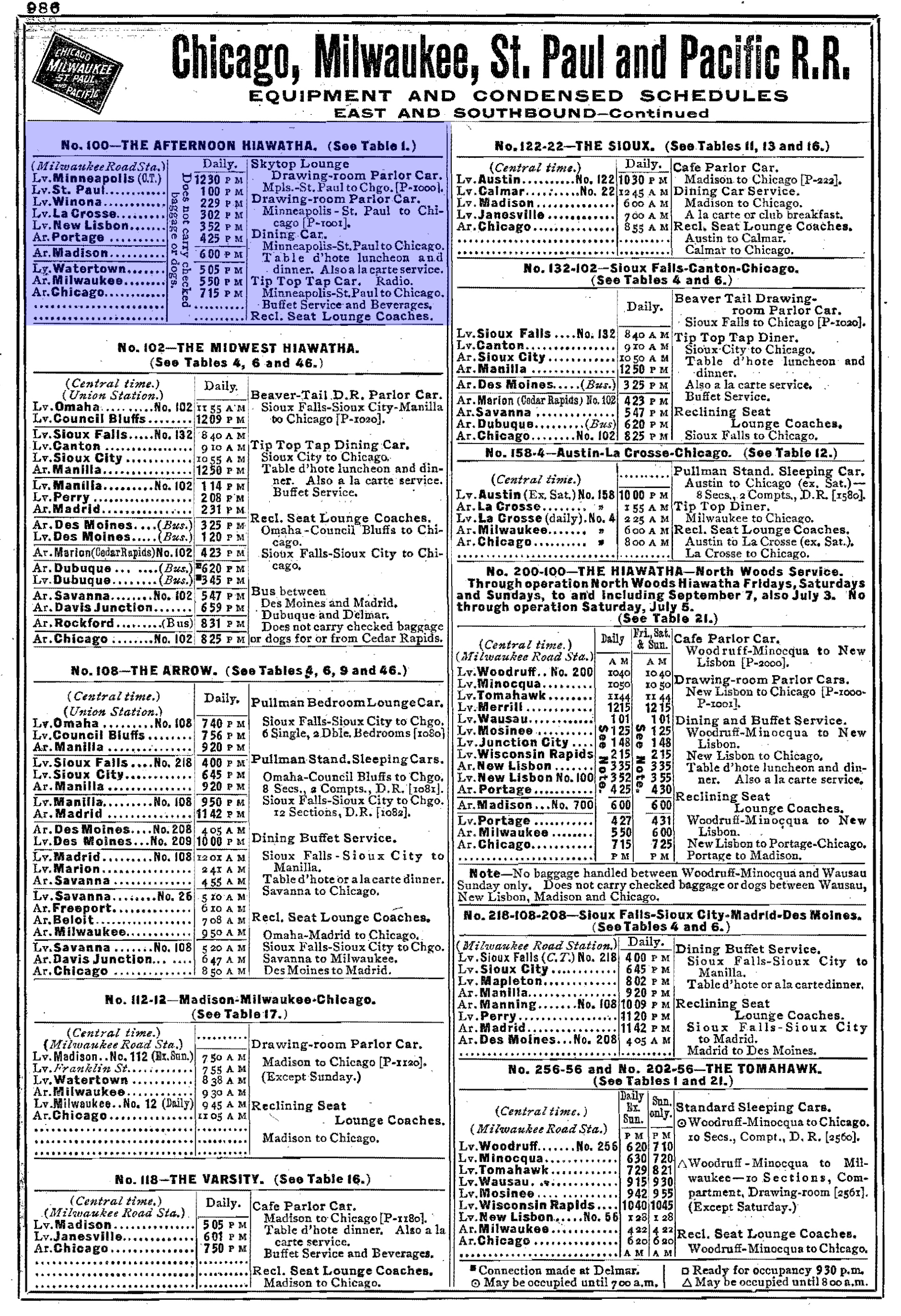 Using a dynamometer car coupled to the original six car consist the the train achieved a top speed of 112.5 mph and averaged 74.9 mph during trials held on May 15th while in regular service it averaged 80-81 mph.

For all of the Hiawatha's beauty much of its legend comes from its speed where 100 mph was common between Chicago and Milwaukee as well as in the flat countryside between Portage and Sparta, Wisconsin.

Additionally, trackside signs stating "Reduce to 90" or instructions cautioning to stay under 100 mph at diamonds through Rondout, Illinois have also helped earn the train its mythical status.

During this era railroads had more flexibility in setting train speeds.  As Mr. Scribbins notes in his book the Hiawatha's original timetable noted it was to hold 90 mph, "...except where the schedule permits a higher speed" in which case there was no maximum speed limit set.  Such authority permitted to train crews is nearly unheard of in this day and age. 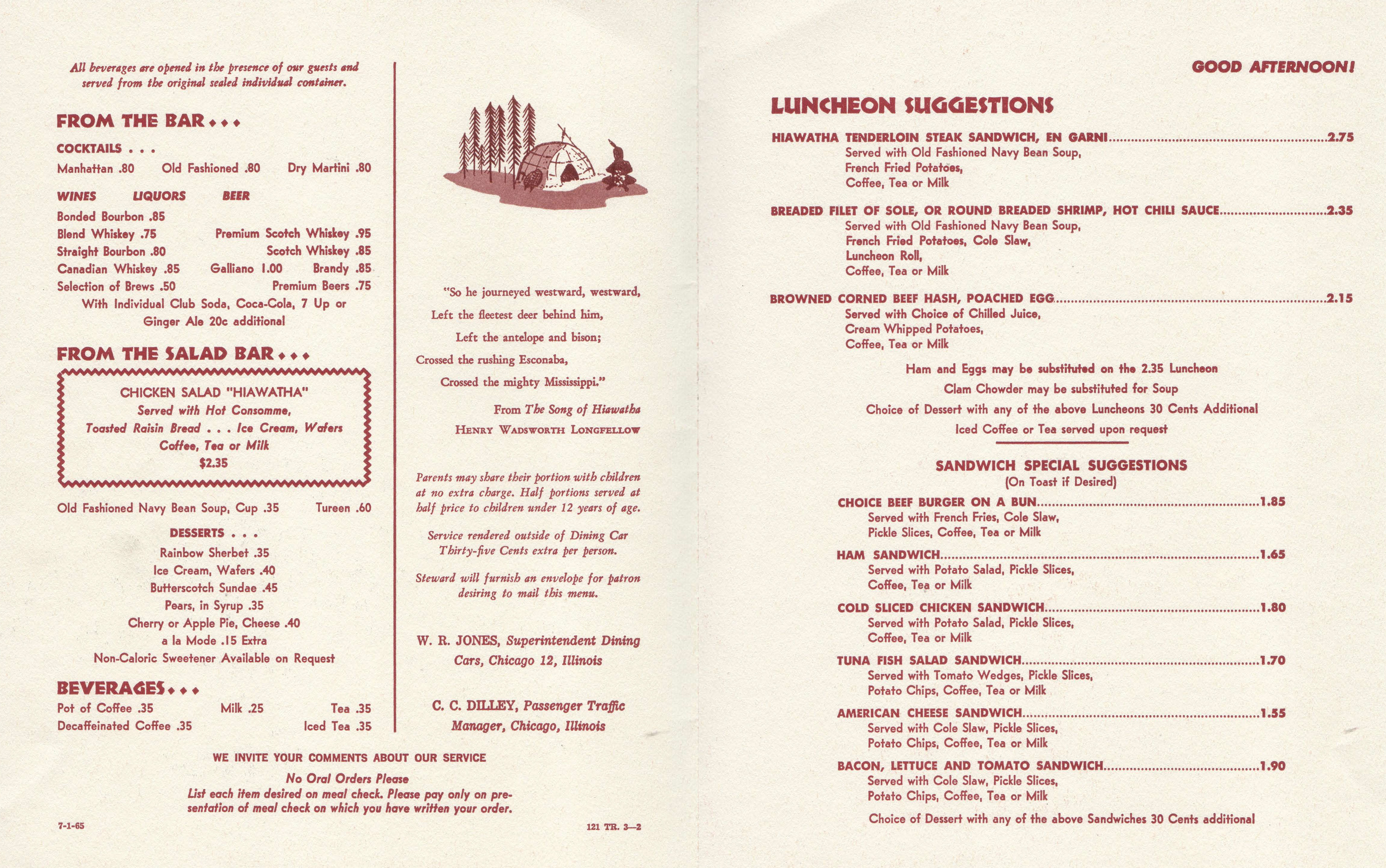 The interior and exterior touches the train received were done by noted industrial designer Otto Kuhler; he suggested the elegant orange/maroon/grey livery, performed the streamlining on the Atlantics, and designed the noted "Beaver Tail" parlor-observations.

Officially, the Hiawatha entered service on May 29, 1935 to throngs of patrons standing trackside.  Not surprisingly it was an immediate success carrying 16,564 passengers during its first six weeks and was regularly sold out.

Such strong ridership, of course, yielded to further improvements and enhancements; new cars entered service during October of 1936 carrying innovative ribbed-sides and weighing 41%-43% less through the use of Cor-Ten steel and aluminum. 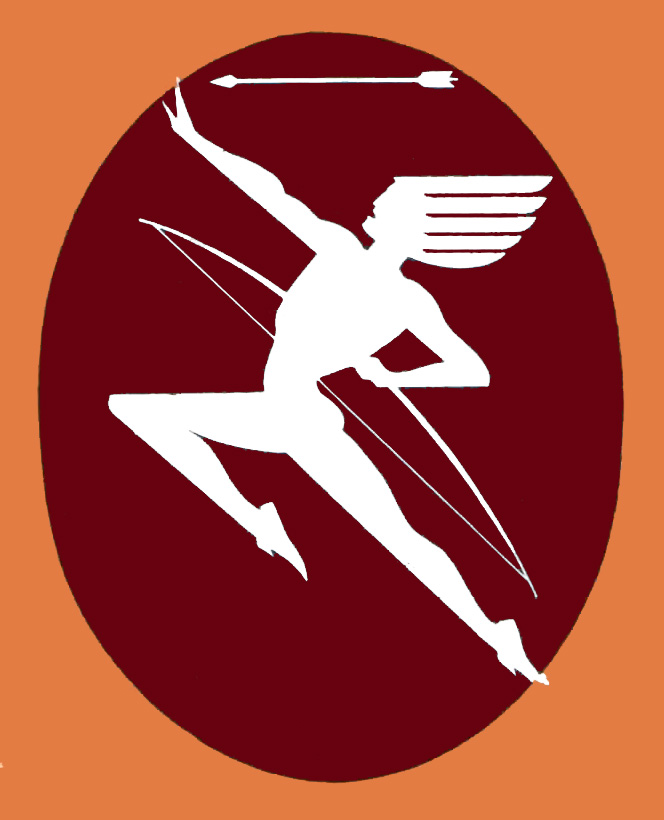 The train also gained two additional cars, a third parlor and a standard 48-seat diner to supplement the incredibly popular Tip Top Tap restaurant-buffet.  In 1938 the Milwaukee Road went back to Alco for beefier steamers, a batch of six 4-6-4 Hudsons.

These locomotives were also carried the Kuhler touches, numbered 100-105, and listed as Class F7. By 1939 they were handling nine car consists; the express-tap, four reclining seat coaches, a diner, and three parlors.  That year also witnessed the introduction of a second Chicago-Twin Cities train inaugurated on January 21, 1939, the Morning Hiawatha.

This train was listed as #5 and #6, while the original, #100/#101, was renamed as the Afternoon Hiawatha.  By then an entire fleet of Hiawathas had already been launched serving other corridors such as the North Woods Hiawatha, Chippewa-Hiawatha, and Midwest Hiawatha.

The last new improvements the railroad implemented prior to World War II was the introduction of diesels when a pair of Electro-Motive E6As (#15A-15B) entered service on September 20, 1941.  These locomotives were supplemented by Alco's own new cab model, the DL-109, of which the Road also owned two, #14A-14B.

All four continued to adorn an attractive version of the Hiawatha livery with a chrome, winged-shield on the nose and a lightening-stripe down the carbody not unlike a similar scheme made famous on the New York Central.  As Mr. Scribbins points out the E6As truly sold Milwaukee's management on diesels.

They were impressed with the locomotives' efficiency, comparable speed, and less maintenance.  After the war the Milwaukee Road hastened its diesel program and slowly phased out its legendary steam locomotives (which made their final run on January 4, 1955) purchasing more EMD models through the early 1960s (E7As, FP7s, and E9As/Bs).

During 1946 the company ended the practice of speed trials, largely the result of a horrific Burlington crash near Naperville, Illinois that brought more Interstate Commerce Commission oversight.  Some of last notable improvements the Milwaukee added were the Skytop parlor-lounge observations designed by Brooks Stevens.

Four were built for regional service while six others were manufactured for the transcontinental Olympian Hiawatha.  They entered service between 1948 and 1949 featuring their trademark rear, open-glass solariums and quickly became one of the Hiawatha's most popular cars.

A few years later between 1952-1953 the final new cars were acquired from Pullman-Standard, ten "Super Domes" used on both the regional and transcontinental trains.  On October 30, 1955 Union Pacific switched to the Milwaukee Road as its Chicago connection for its transcontinental City streamliners (via Omaha).

This move prompted the company to adopt UP's Armour yellow and grey livery, a simpler design that not only matched the City trains but was cheaper to implement given declining ridership of the times. 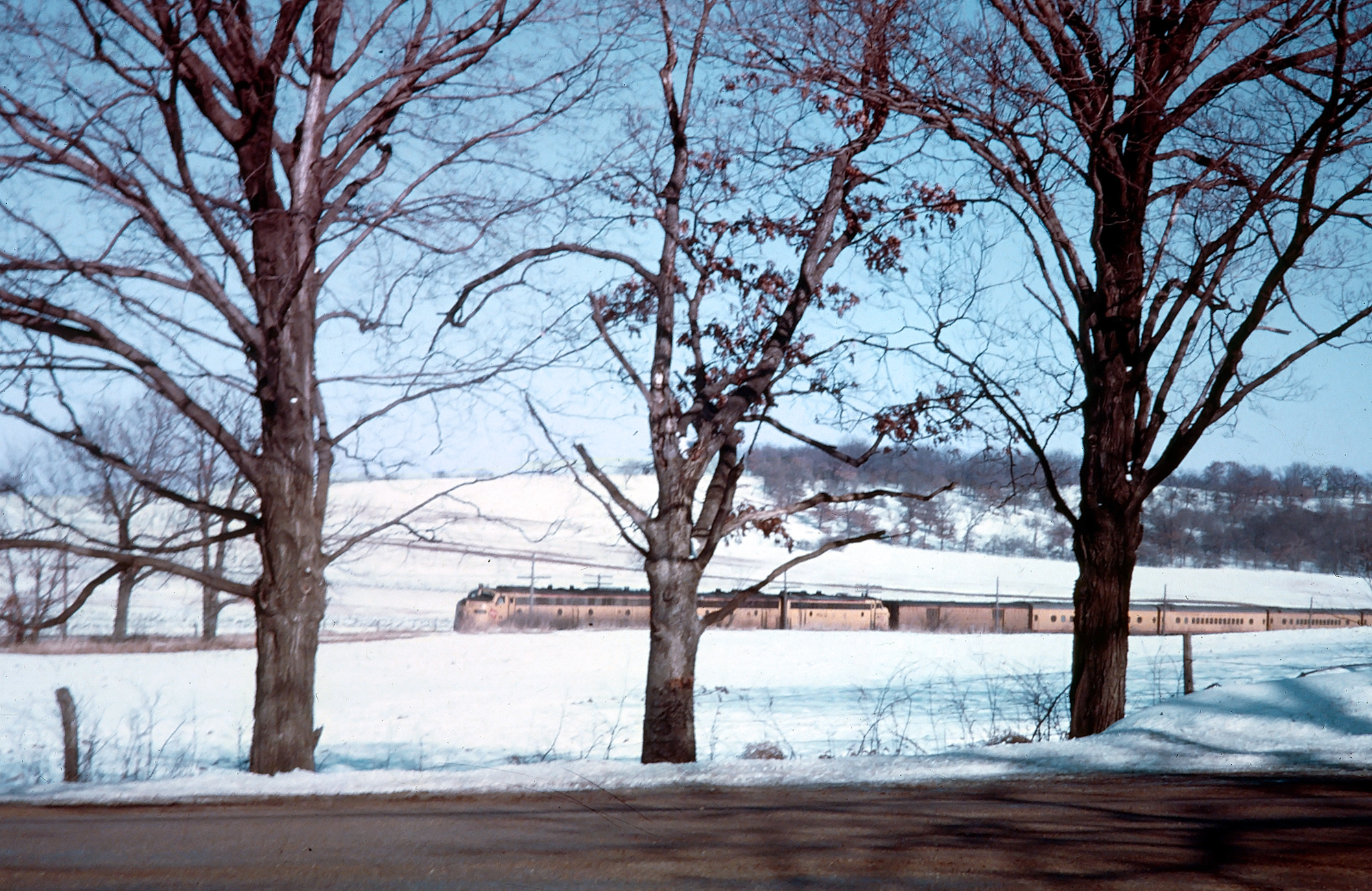 A scene a bit out of frame but historic nonetheless featuring train #101, the westbound "Afternoon Hiawatha," hustling through Hartland, Wisconsin on a quiet winter's day, circa 1958. A.C. Kalmbach photo. American-Rails.com collection.

To its credit the Milwaukee Road continued providing top-level service on its Chicago-Twin Cities corridor, unwilling to let its proud Hiawathas suffer the same fate besetting much of the industry.

As most railroads grew continually disinterested in the money losing venture of transporting passengers many amenities and accommodations were eliminated in an effort to reduce costs.  Making matters worse, some nearby roads cared not if their locomotives and cars were even clean.

Why bother when no one was riding anyway?  As things worsened during the 1960s the Milwaukee attempted to ease losses by running expedited Flexi-Van mail cars behind the Skytops, which worked but certainly made for a less attractive train.

The end finally came in 1969.  During August the railroad successfully petitioned the ICC to discontinue the Afternoon Hiawatha entirely, and the train made its final run on January 23, 1970.  Its Morning counterpart would survive until the start of Amtrak on May 1, 1971.