Alaska railroads are as remote as they are stunning with the panoramic scenery they provide. Here, you may not find any of the classic fallen flags, current Class Is, or short lines.

However, railroads do exist here (even though it got a much later start than in the lower forty-eight states) and with the state's longest system, the Alaska Railroad (ARR) (currently, a Class II, regional), offering passenger train service across much of its system, you have the chance to see some of the most spectacular scenery in the world.

The only other railroad currently operating in Alaska is the famed White Pass & Yukon Route Railroad.

The WP&YR no longer operates freight service but thanks to a bustling cruise ship industry that brings these vessels directly onto awaiting trains at Skagway it is the busiest tourist line in the country, offering unparalleled scenery of America's "Last Frontier."

The railroad has also recently embarked on an effort to restore rail service all of the way to White Horse, Yukon Territory. 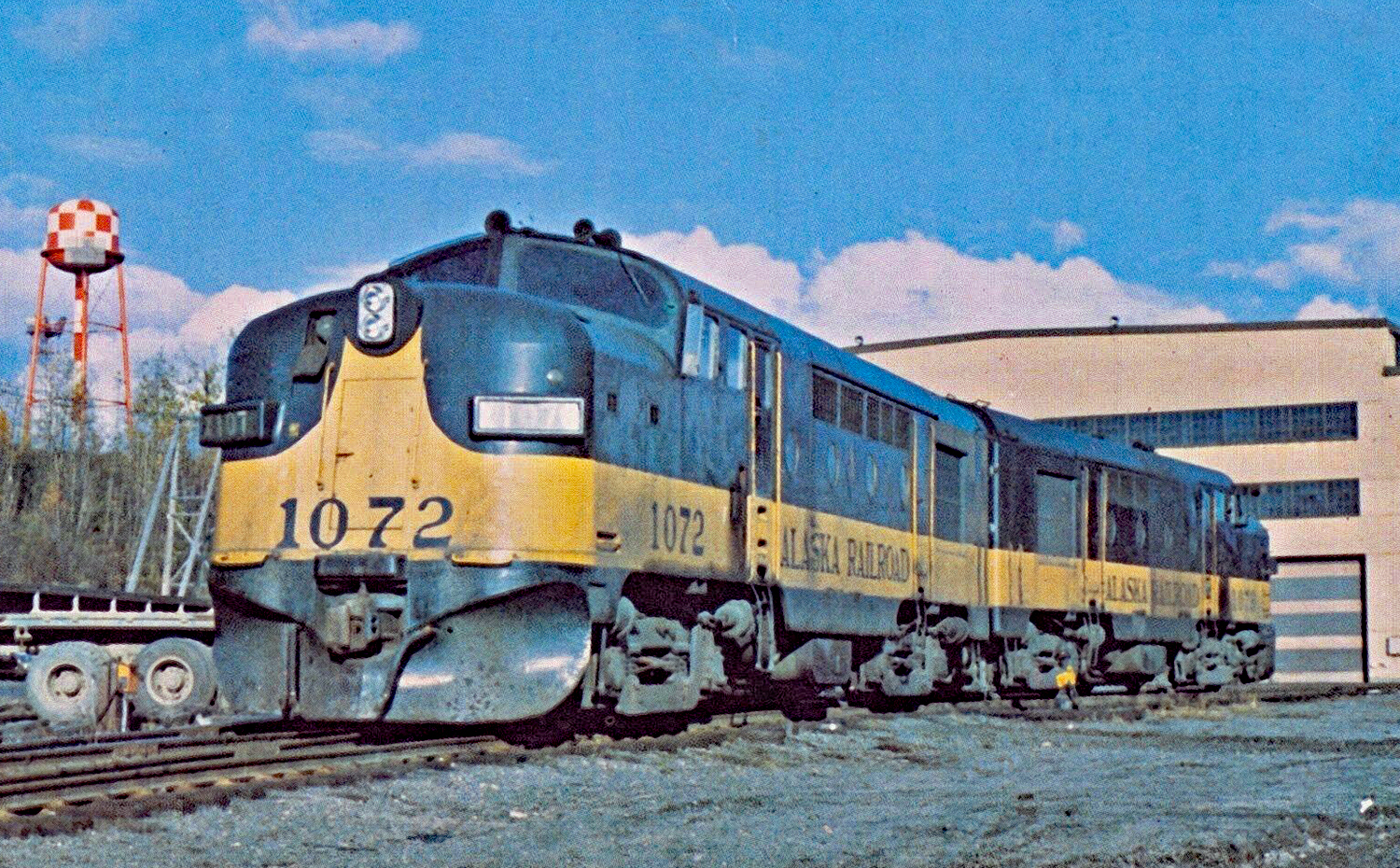 Perhaps one of the most unique examples of streamlining ever attempted was that done by the Alaska Railroad when a pair of RS-1's were shrouded in 1949. Due to a power shortage they were reactivated in August, 1971 and were pictured here in Anchorage on October 11th that year. Phillip C. Faudi photo.

Alaska's history with trains dates to 1898 when the White Pass & Yukon Route Railroad was chartered during the height of the Klondike Gold Rush of the late 19th century.

The point of the railroad was to provide prospectors a means of more easily reaching the gold fields to the north near White Horse, where the WP&YR route would terminate.

The railroad began at Skagway where a port was located and prospectors could easily disembark from ships.

Interestingly, by the time the railroad was completed on July 29, 1900 (along a narrow-gauge main line that covered some 111 miles) much of the gold fever had already passed and interest in the mining had declined.

Despite the WP&YR losing out on the region's gold mining it still became an important asset in the movement of other metals such as copper and silver.

Additionally, the railroad moved a small amount of merchandise freight and found additional traffic along a few branch lines it constructed during the early 20th century.

The railroad became an important transportation artery during both World War I and World War II moving freight to and from the port at Skagway.

The company also saw heavy traffic during the building of the Alaska Highway (Alaska State Route 2), sometimes dispatching as many as seventeen trains per day. 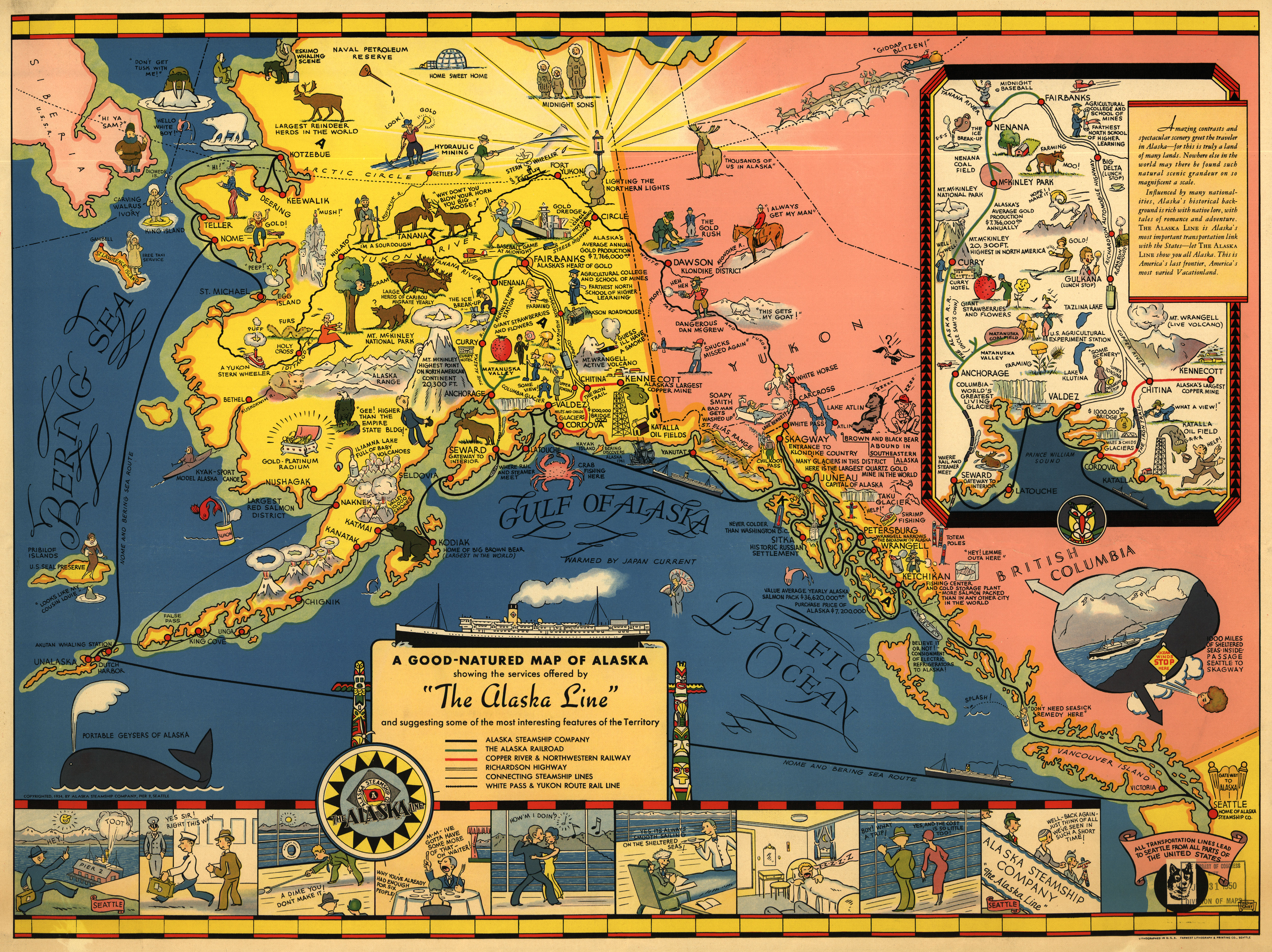 An Alaska railroad map from 1934 showing all of the state's lines then in service, including steamship lines. Author's collection.

Throughout the rest of the WP&YR's days as a for profit freight railroad the company hauled mostly copper and lead-zinc ore.

In 1951 the railroad upgraded to diesel locomotives from General Electric and the American Locomotive Company (as well as its subsidiary, the Montreal Locomotive Works).

Unfortunately, by 1982 the final mine closed ending the WP&YR's days as a commercial railroad. It reopened in 1989 as a tourist railroad and today operates about 40 miles of its original main line.

For history's sake, Alaska would be home (at one time or another) to roughly twenty railroads although today it is home to only two, the ARR and the aforementioned White Pass & Yukon Route Railroad.

The history of the Alaska Railroad began in 1903 when the Alaska Central Railway completed its main line between Seward and 50 miles northward.

It went bankrupt just four years later and was reorganized as the Alaska Northern Railway. 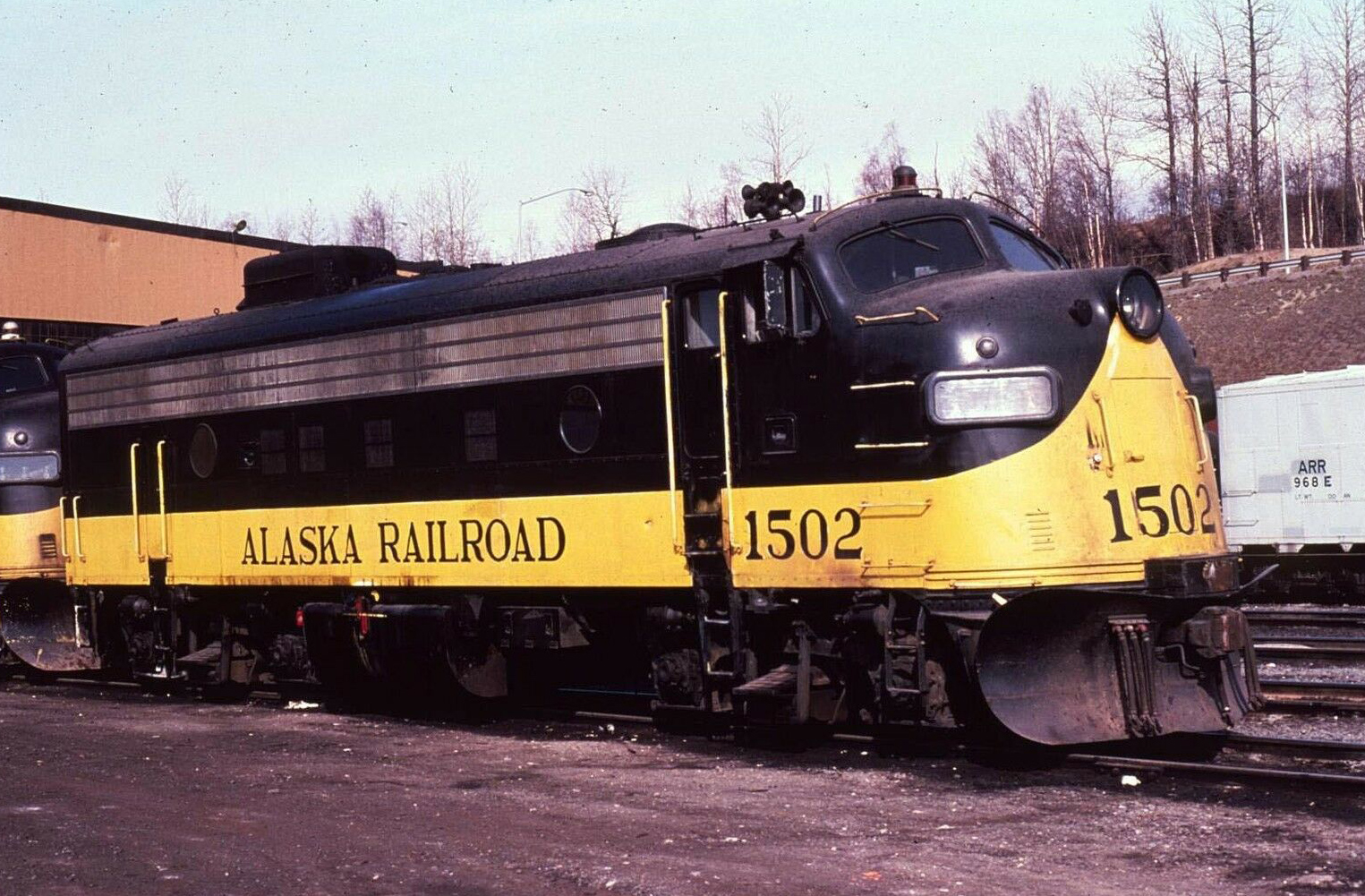 Alaska Railroad FP7's are seen here at the engine-house in Anchorage, circa 1970's. Photographer unknown.

By 1944 with the establishment of a second port at Whittier (the other being at Anchorage, the railroad's headquarters by 1915 having been moved from Steward), the Alaska Railroad was all but complete and has changed little over the last 70+ years.

In all, the Alaska Railroad system runs roughly due north, winding its way from Seward in the south to Eielson in the north, where the Alaska serves the Eielson Air Force Base.

The Alaska Railroad became state owned in the 1980s when President Ronald Reagan, in 1983, signed legislation transferring ownership of the railroad to the State of Alaska.

The transfer was official on January 5th, 1985 when on that day the Alaska Railroad came under ownership by the state.

The state's railroads haul nearly as many passengers as they do freight. Currently the state holds 506 route miles of railroad with the ARR pulling double duty using most of that (nearly 400 miles) to haul passengers and freight (the ARR is also the only privately owned railroad which still has daily operating passenger trains).

As for the future of Alaska's trains, it will be very interesting to see what happens in the coming years; plans are in place to see the Alaska Railroad finally open a connection with the North American rail network.

Additionally, the White Pass & Yukon Route may again become commercial freight railroad as mining operations may again resume along its route (which may be fully rebuilt to White Horse). 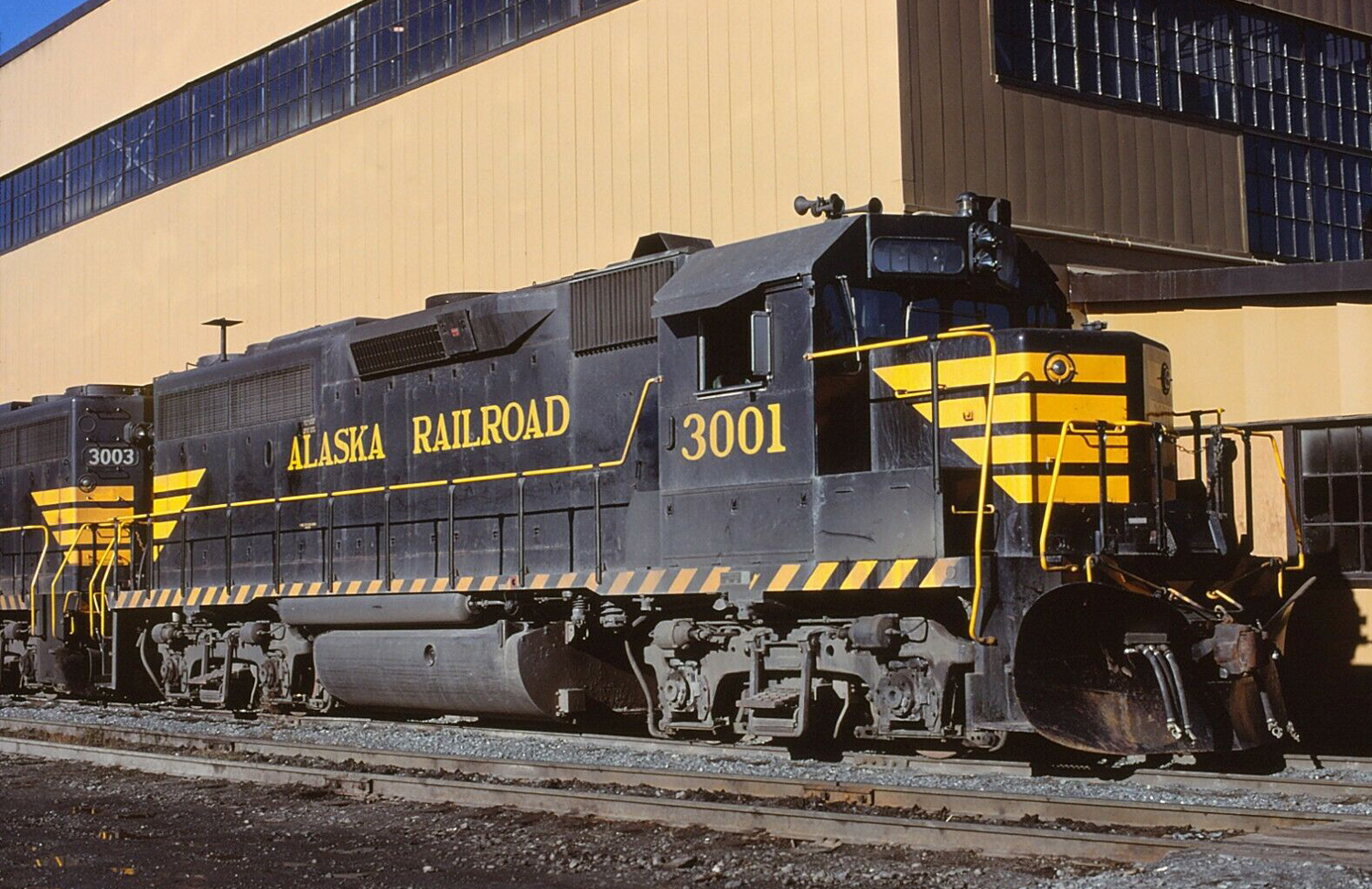 Aside from the tremendous scenery afforded during trips, another draw of the WP&Y is that it uses eleven unique shovelnose diesel locomotives, built by General Electric between 1954 and 1966 and the railroad also operates two Baldwin steam locomotives, a Mikado 2-8-2, and a 2-8-0 type.

The railroad has grown so much over the last twenty years that in 2007 it reopened 27 more miles of the original railroad, north to Carcross in the Yukon.

Along with the historic White Pass & Yukon Route Railroad, Alaska is also home to one railroad museum, the Museum of Alaska Transportation and Industry. Located in Wasilla it is home to several pieces of historical railroad equipment.

All in all, Alaska is well worth the long trip north (if you live in the lower forty-eight) to see not only the trains of Alaska but also the state's stunning beauty.