The Northern Alberta Railways (AR) was a consolidated system formed by the local government of several, small bankrupt lines during the late 1920s.  Under the setup NAR was jointly owned by Canada's largest two systems, the Canadian National and Canadian Pacific.

At its peak the NAR spanned nearly 1,000 miles in length and was one of the country's largest railroads.

After nearly six decades as a subsidiary system CN bought out CP's interests in the NAR during the early 1980s.  Once it had full control of the property CN quickly dissolved the NAR name and worked to merge it into its transcontinental network.

Since this time, predominantly during the mid-1990s, the Class I has either abandoned or sold off large sections of the system.  Today, several sections of the former NAR is operated by various short lines. 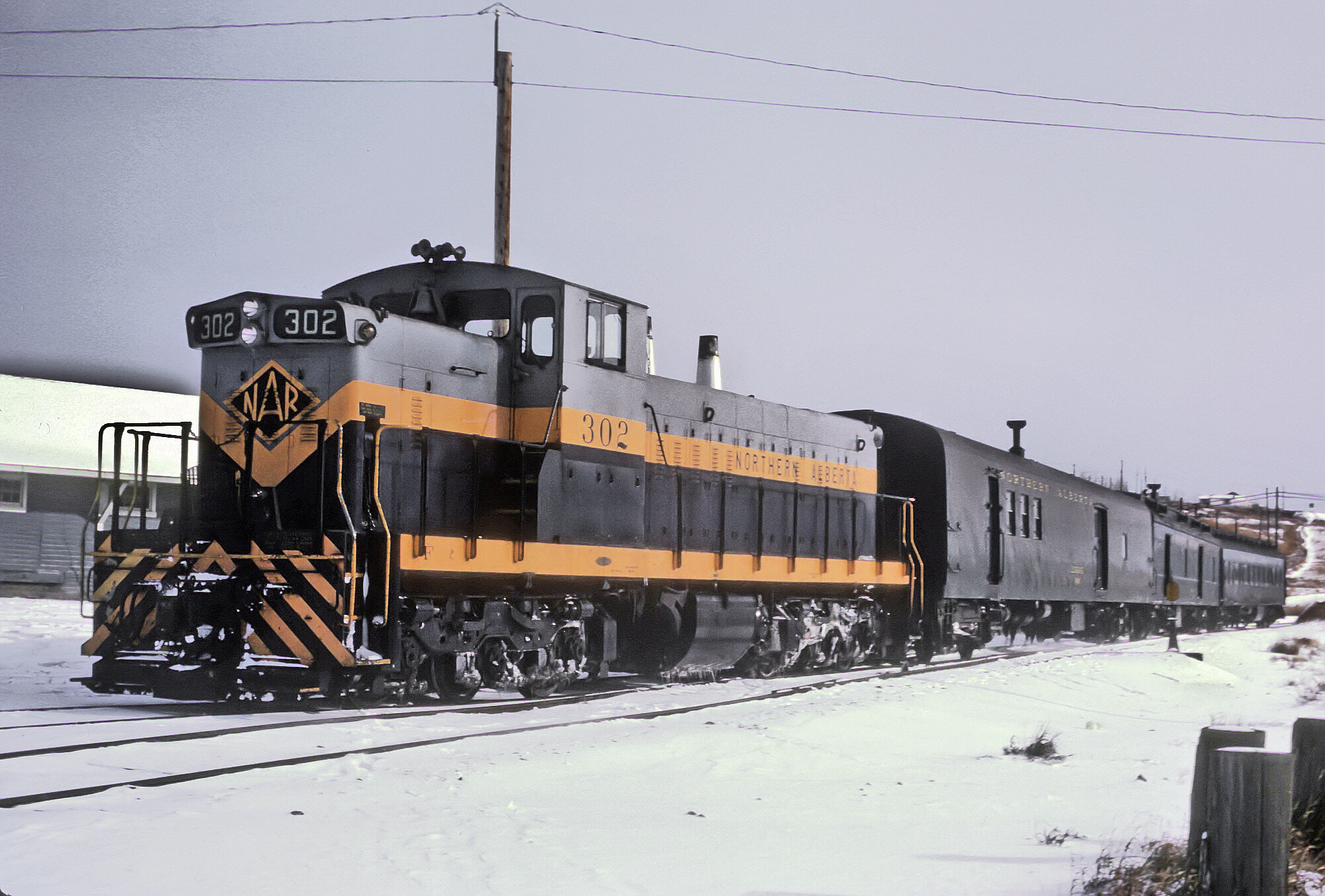 Canada's western province of Alberta was once home to one of the country's largest railroads, a system collectively known as the Northern Alberta Railways.  At its greatest size the NAR resembled a rough "V" with all lines intersecting at Edmonton and running north and west.

The railroad was comprised of four different predecessor systems, all of which dated to between 1909 and 1926.  The first incorporated was the Alberta & Great Waterways Railway of 1909, planned to run 299.1 miles due north from Edmonton to Waterways (Fort McMurray) along the Athabasca River.

Construction of the A&GW began in 1914 and eleven years would pass before the route was fully opened in 1925.  The second system was the Athabaska Railway formed after 1910 but soon rechartered as the Edmonton, Dunvegan & British Columbia Railway (ED&BC) in 1911.

The railroad's intent was to head northwesterly from Edmonton with hopes of perhaps reaching the Yukon as well as connecting with the Pacific Great Eastern (PGE) to provide through service between Alberta and British Columbia.

Tracks were first laid in 1912 and the railroad trekked westward for the next sixteen years reaching as far as Hythe by 1928.  Two years later under the newly created NAR name the ED&BC reached Dawson Creek, B.C. (decades later this became an interchange point with the PGE).

The railroad was an impressive 489.6 miles in length although money troubles and financing precluded its builders from ever seeing any further growth.  The last privately-operated system to make up the NAR was the Central Canada Railway of 1913. 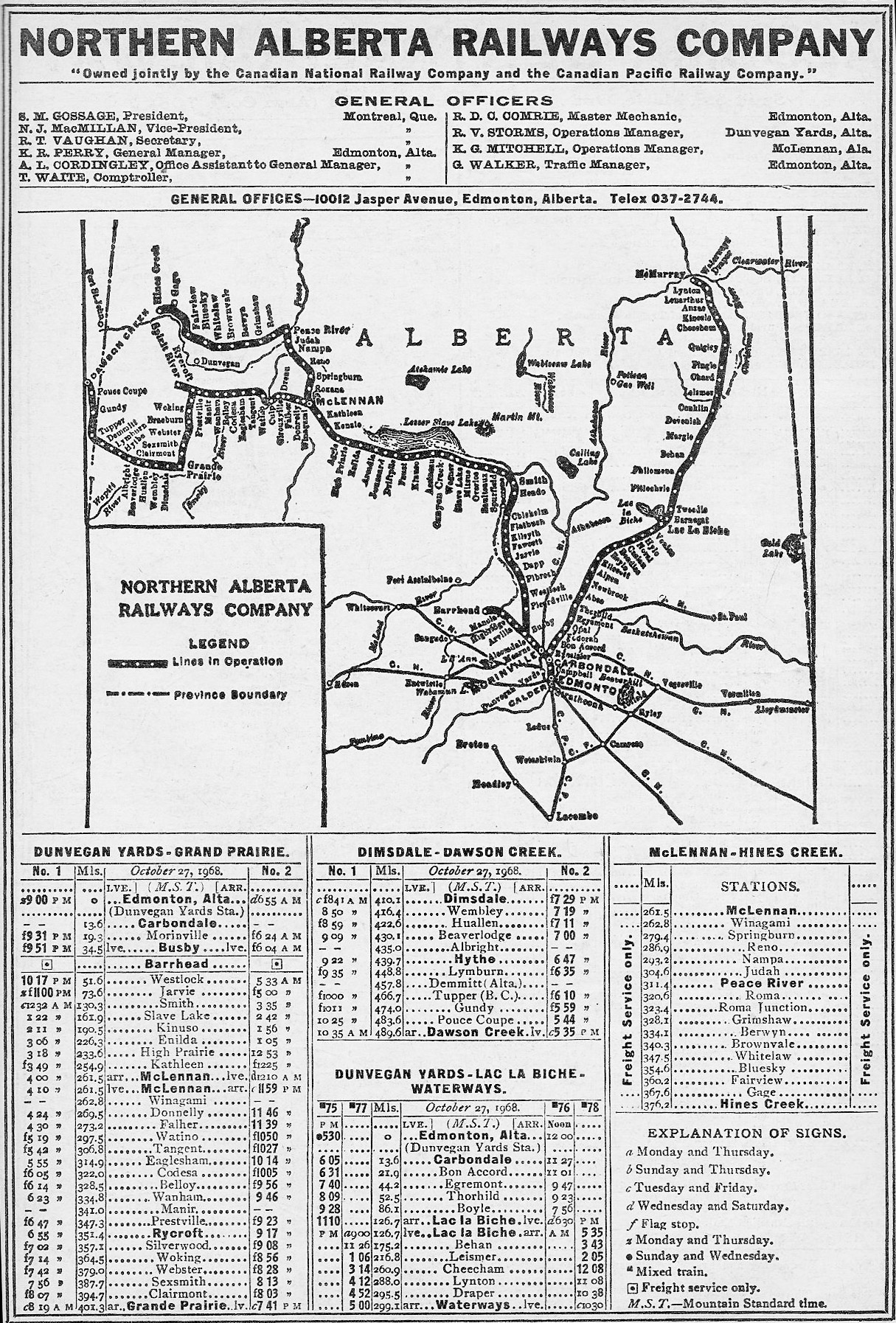 The CCR wanted to extend rail service along the Peace River, and was extended from a connection with the ED&BC at McLennan to Hines Creek.  The railroad was completed in 1930 at a length of 114.7 miles.

Interestingly, all three of these systems had been financed and developed by J.D. McArthur who had been constructing railroads (among several other business ventures) since the early 20th century in the provinces of Manitoba, Saskatchewan, and Alberta.  During his efforts to complete the ED&BC and issues resulting from World War I McArthur's properties fell on hard times.

In an attempt to preserve rail service to the region the Alberta government leased the CCR and ED&BC while directly purchasing the AG&W.  All of this occurred during the early 1920s with the Canadian Pacific Railway given direct authority to operate the lines.

After a few years the railroads returned to government control although by the end of the decade Alberta was looking to consolidate the properties for improved and more efficient operations.

During March of 1929 the NAR was given a formal charter, which was made up of the AG&W, CCR, and ED&BC as well as the Pembina Valley Railway.

The small PVR was a government-built system created in 1926 that ran from a connection with the ED&BC at Busby to Barrhead (about 50 miles).

Collectively, the new NAR system was jointly owned and maintained by Canadian Pacific and Canadian National.  Overall, it was about 950 miles in length and after nearly ten years was finally able to turn a profit for the first time in 1937.

Traffic on the NAR was always largely dependent on Alberta's rich agriculture industry and the railroad moved vast amounts of grain, livestock, and related products.  Other freight on the NAR included lumber, coal, gypsum, lead, zinc, and petroleum products. 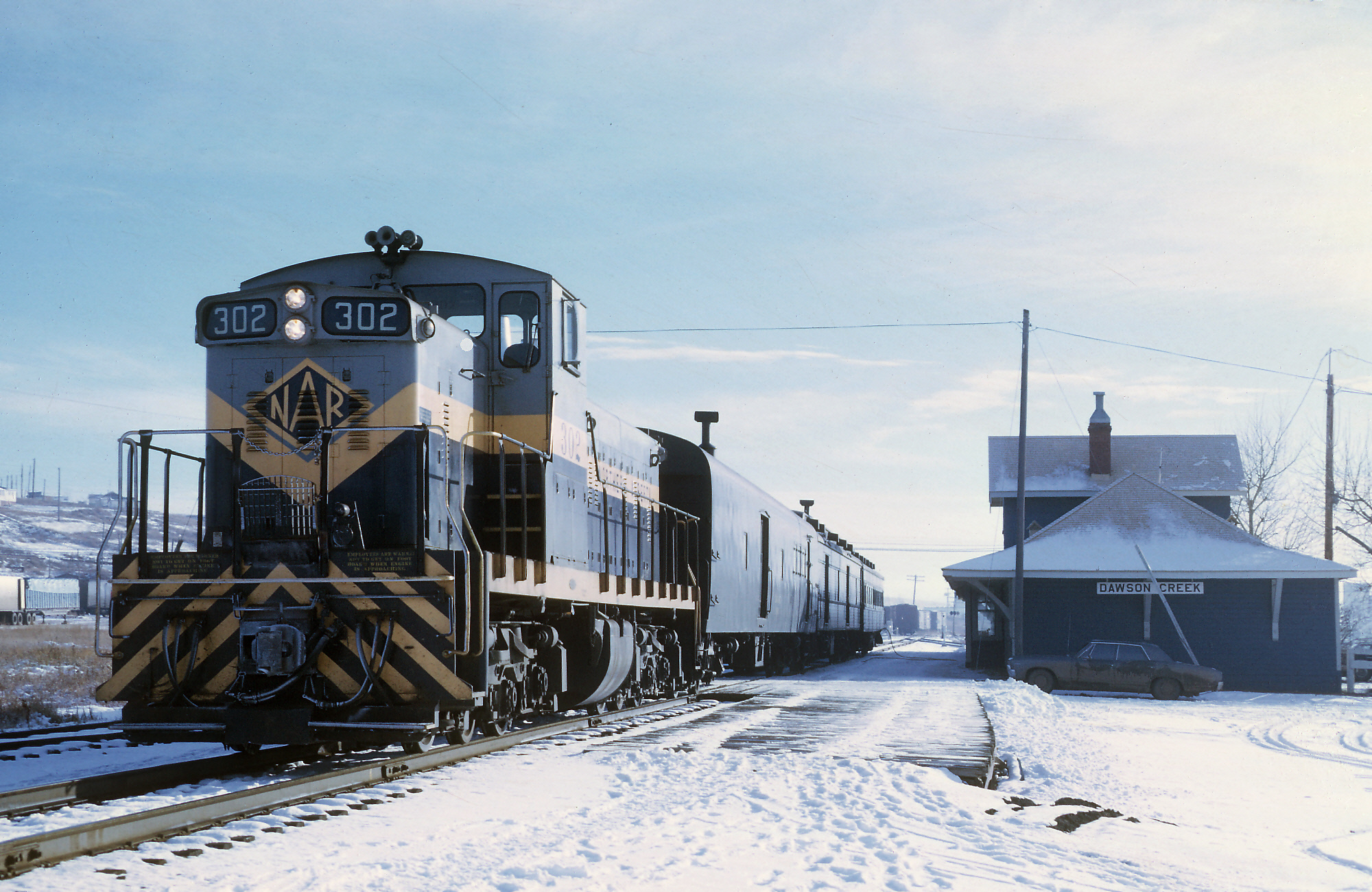 By October of 1960 the Northern Alberta Railways had been completely dieselized, using a fleet of General Motors Diesel locomotives (GMD was the Canadian arm of General Motors' Electro-Motive Division) consisting of GP9s and the GMD-1, found only in Canada.

Its equipment was clad in a simple but classy grey and dark blue livery with yellow accents.  Additionally, the diamond "NAR" logo was presented on the nose and carbody of its locomotives.

On January 1, 1981 Canadian National purchased CP's 50% stake in NAR and worked quickly to dissolve the railroad, merging its operations into the Class I's giant transcontinental system.

During the mid-1990s CN took steps to either sell off or abandon large sections of the NAR.  Ironically, after doing so Canadian National has since bought back some of the former NAR lines it had once let go.