The Algoma Central Railway was a historic Ontario short line which connected Hearst with Sault Ste. Marie. The road's early years were somewhat rocky as its promoter struggled to carry out its completion.

His initial hope was in establishing a deep water port along the Hudson Bay for the transportation of iron ore but these dreams fell through.  Ultimately, new owners completed a more modest system of slightly less than 300 miles.

While it never reached the bay the railroad did become profitable operating a spectacularly scenic route, particularly through the Agawa Canyon.  Its beauty offered an unexpected benefit, popular rail tours.  These trains maintained a high level of demand through the 2000's.

By the 1990's the Algoma Central Corporation had broadened its business portfolio and was no longer interested in its rail division.

As a result the railroad was sold to Wisconsin Central, Ltd. which was subsequently acquired by Canadian National shortly thereafter.  Since 2014 CN has threatened to mothball the entire main line although the tour trains continue to operate as of this writing. 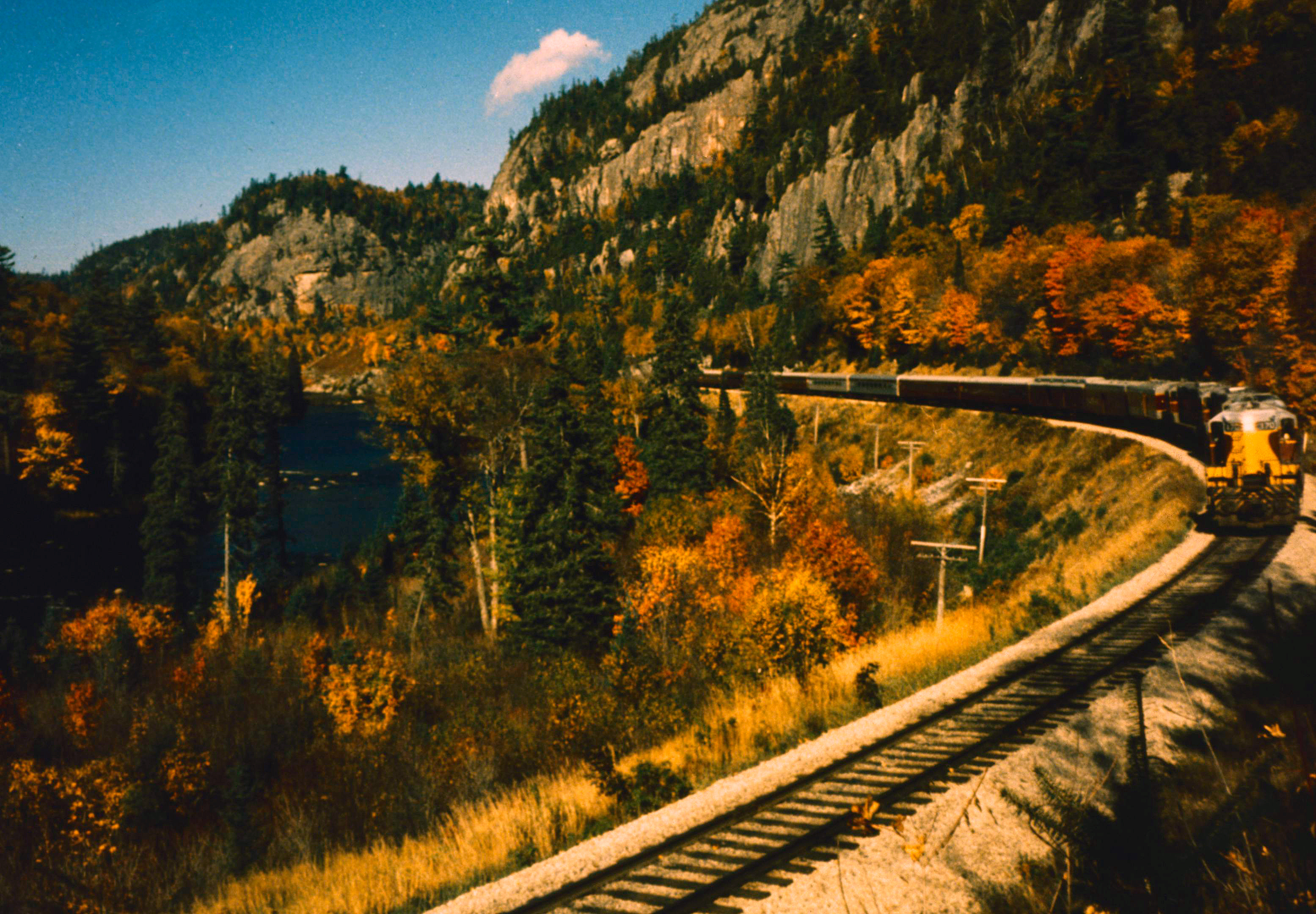 Several Algoma Central GP7's, led by #170, have the "Agawa Canyon Train" along the Agawa River (Ontario) during a fall day in the 1960's. Author's collection.

The Algoma Central was the idea of Francis H. Clergue to tap southern Ontario's vast timber and iron ore deposits.  The entrepreneur's early years were spent in Maine where he saw success with a number of ventures before turning his attention to southern Ontario.

During the late 19th century he helped establish St. Mary's Paper and Algoma Steel (originally known as the Algoma Iron, Nickel & Steel Company) in Sault Ste. Marie then focused efforts on a railroad that would handle ore and timber to points along the Hudson Bay, Lake Superior, and Sault Ste. Marie.

According to Ron Cady's article, "Algoma Central: Tourist And Tonnage" from the September, 1984 issue of Trains Magazine, the Algoma Central Railway was formed on August 11, 1899.  Its name survived for just two years before being changed to the Algoma Central & Hudson Bay Railway (AC&HR) in 1901 to better reflect the company's intentions.

Initially, Clergue had no issues in generating needed funding for the project as he eyed a route from Sault Ste. Marie to Lake Superior at Michipicoten.  Here, rich ore deposits would be shipped out over the lakes.  Unfortunately, it proved untenable as a port for the big steamships and he ran out of money after completing just 56 miles of track. 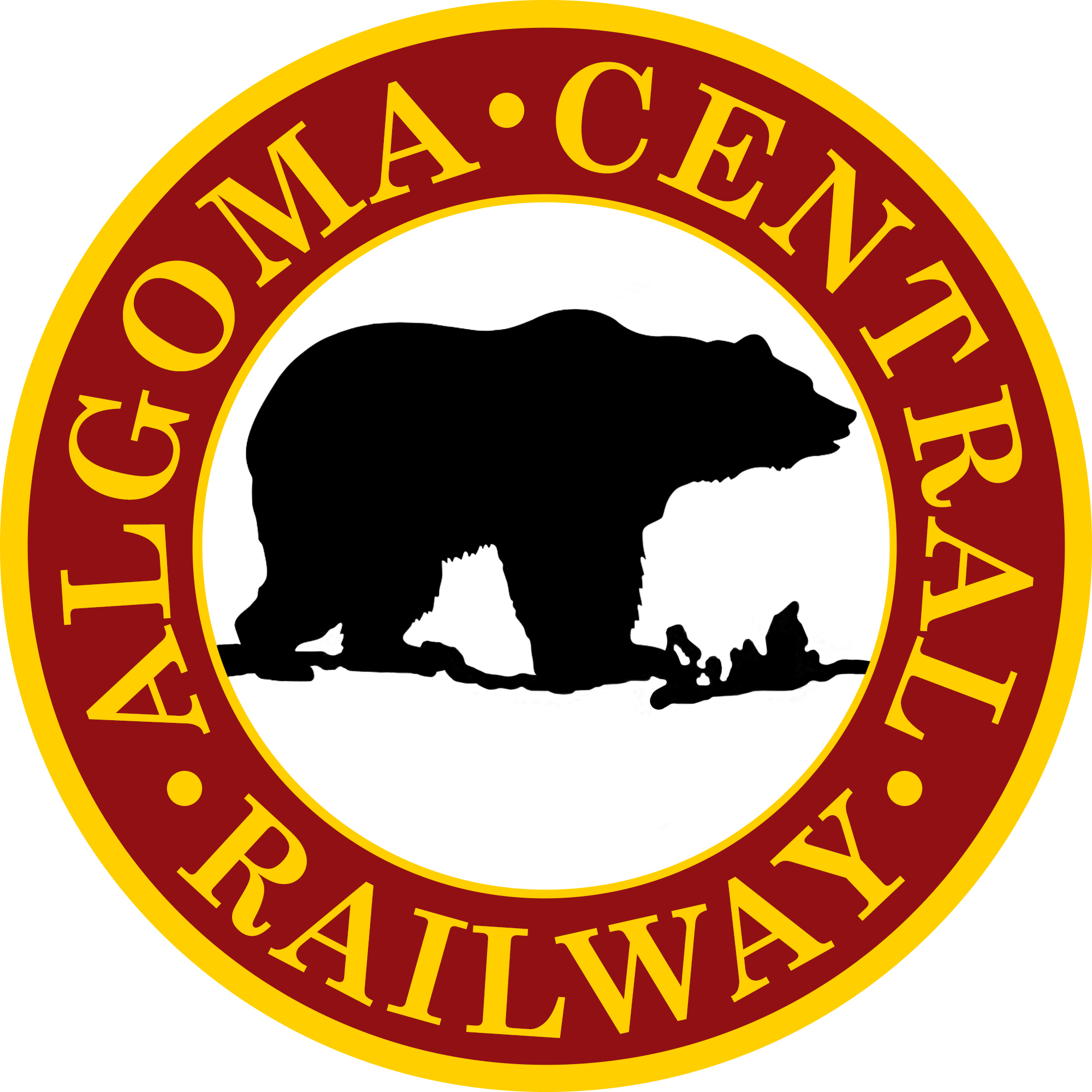 His entire empire collapsed and the railroad was subsequently sold at foreclosure.  In addition, the steel and paper interests were separated.

New ownership in 1909, based out of London, England, not only gave up on developing Michipicoten but also ended Clergue's hope in reaching the Hudson Bay.

Instead, they believed a more practical operation would establish a northern connection with the National Transcontinental Railway (later Canadian National) at Hearst.

By January of 1912 through service was opened from Sault Ste. Marie to Michipicoten via Hawk Junction.  At the same time crews worked northward out of Franz (where interchange was established with Canada's other transcontinental system, the Canadian Pacific) and had finished the line to Hearst in 1914.

In all, the railroad operated a 296-mile main line in addition to the 26-mile Michipicoten Branch giving it a total of 322 route miles.  The entire system was dotted with small lakes, ponds, and marshland although the southern end, being somewhat more rugged, offered the greatest scenery.

Heading north of Sault Ste. Marie on the Soo Subdivision (Steelton - Hawk Junction) trains pass over the breathtaking 1,550-foot Montreal River Trestle which rises 130 feet above the river and spans a hydroelectric dam.  Just a short time later the stunning Agawa Canyon is reached where rails skirt the Agawa River and the walls rise 575 feet above the narrow valley. 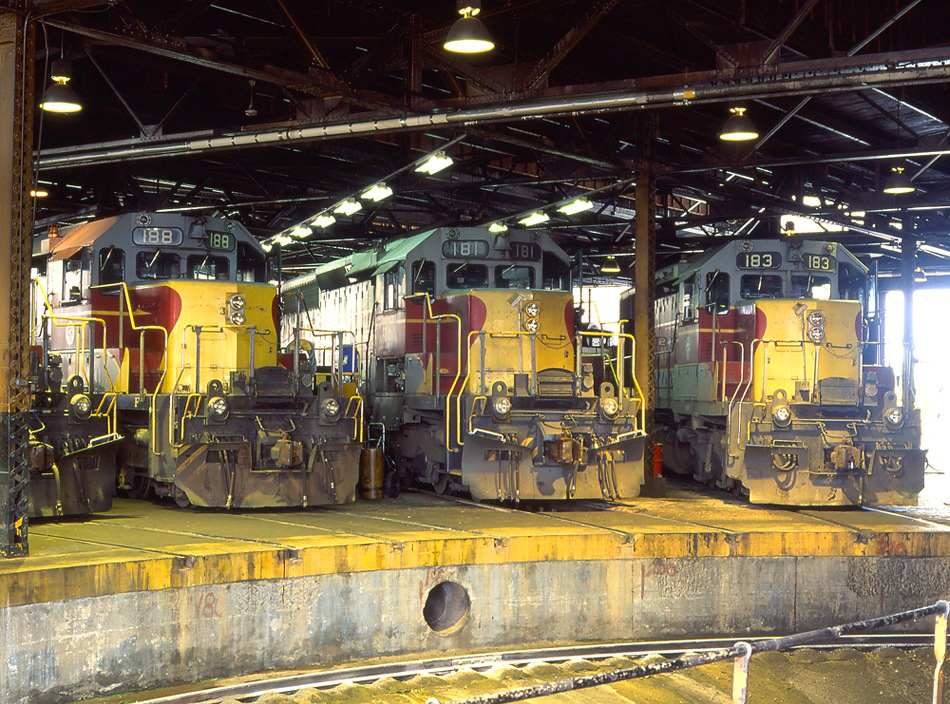 An Algoma Central SD40 and a pair of SD40-2's sit around the unique enclosed turntable at the Steelton Shops in Sault Ste. Marie on August 13, 1994. Wade Massie photo.

The railroad's Northern Subdivision (Hawk Junction - Hearst) flattens out with small bodies of water and marshland widespread across the landscape.  Another interchange with the Canadian National was also gained at Oba, 51 miles south of Hearst.

At Steelton, just outside of Sault Ste. Marie the AC&HR established its primary shops and maintenance facility, which featured a very unique arrangement of having a turntable enclosed within the roundhouse.

In a somewhat ironic twist, Sault Ste. Marie itself became the railroad's most important port where the company's own ships handled a wide variety of inbound and outbound freight.

All along the main line were customers related to the timber industry with traffic ranging from pulpwood, logs, and wood chips to finished lumber and veneering.  Algoma Steel was also an important customer; outbound loads consisted of finished steel with inbound shipments of iron ore. 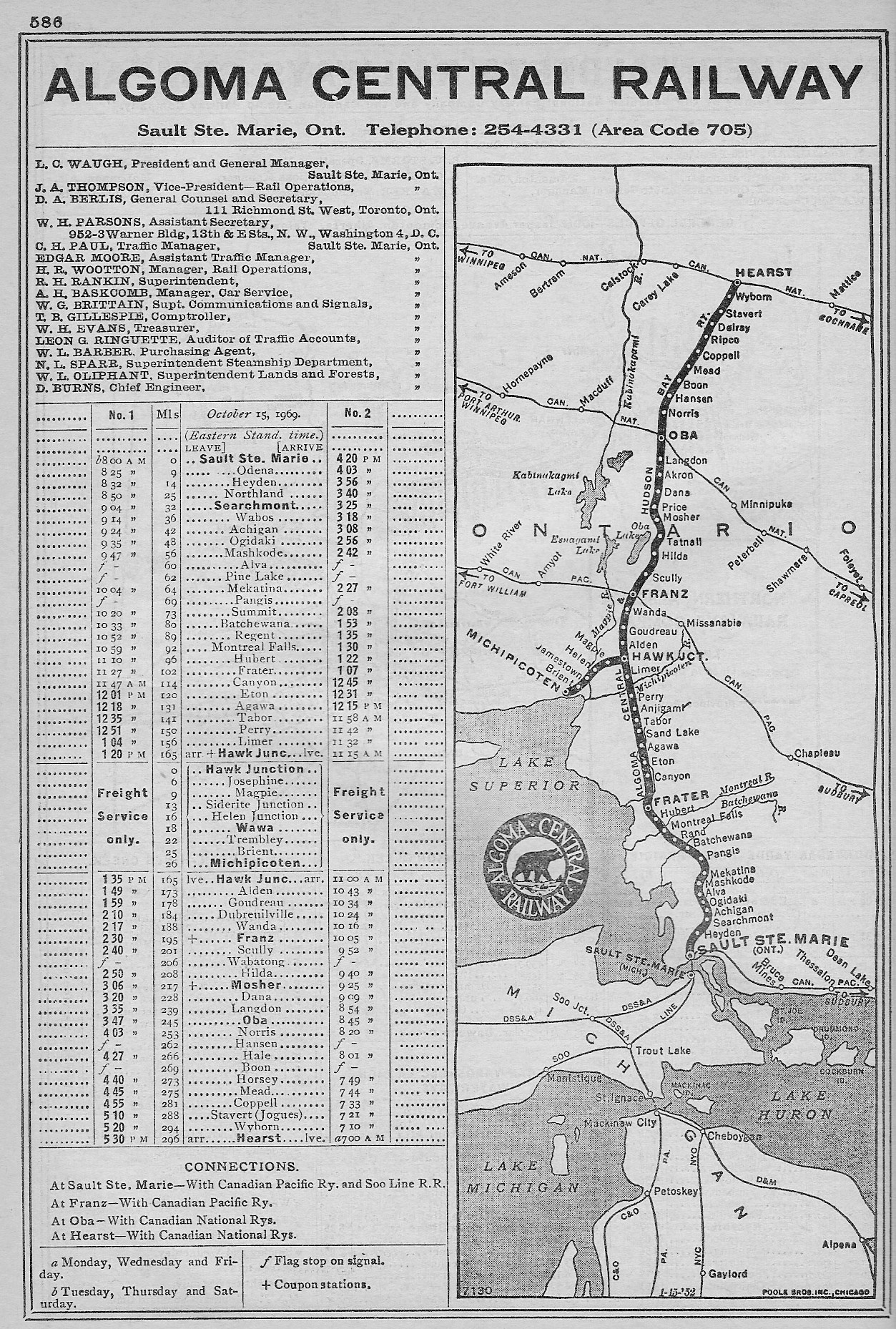 While the steel and timber industries were the foundation of AC&HR's business it also moved a range of other freight including pitch, petroleum products, and limestone.  However, early on it was not the financial success it turned out to be in later years.

Shortly after the railroad's completion continuing struggles saw it slip once more into bankruptcy where it remained a ward of London's Bondholder Committee until after World War II.

Private ownership would not return until 1959.  From its early days the company operated as more than just a railroad with a fleet of Great Lake ships known as the Marine Division. 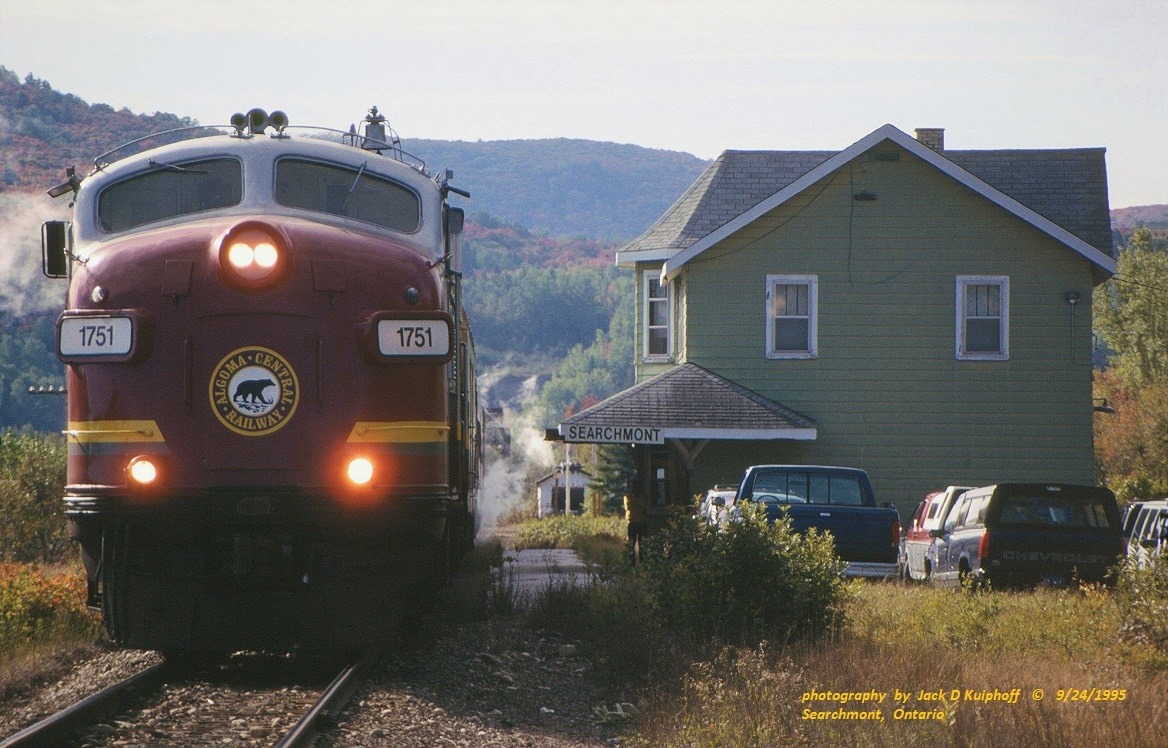 "Algoma Central FP9 #1751 leads train #1 out of the Sault as it heads northbound to Hearst and passes the classic station at Searchmont, Ontario on September 24, 1995." - Jack Kuiphoff

During the 1960's it further diversified by expanding into real estate and then branched out into the trucking industry. In 1965 the railroad's elongated name was dropped in favor of the original version, Algoma Central.

Beyond freight there was a strong demand for passenger service and the railroad was one of the last to continue offering such privately.

The above steam roster information is courtesy of Dale Wilson's book, "The Algoma Central Railway Story." 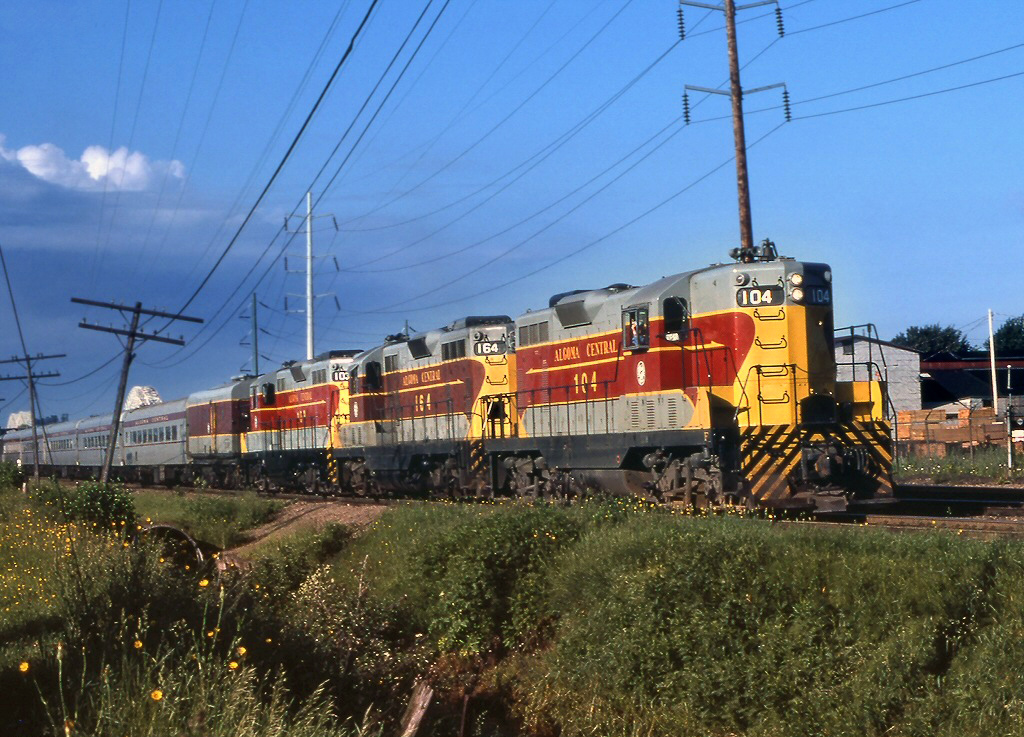 The Algoma Central was the first Canadian line to fully diesel, completing the process in 1952. It stuck entirely with EMDs (in this case locomotives from the builder's London, Ontario works; General Motors Diesel Division or GMDD). 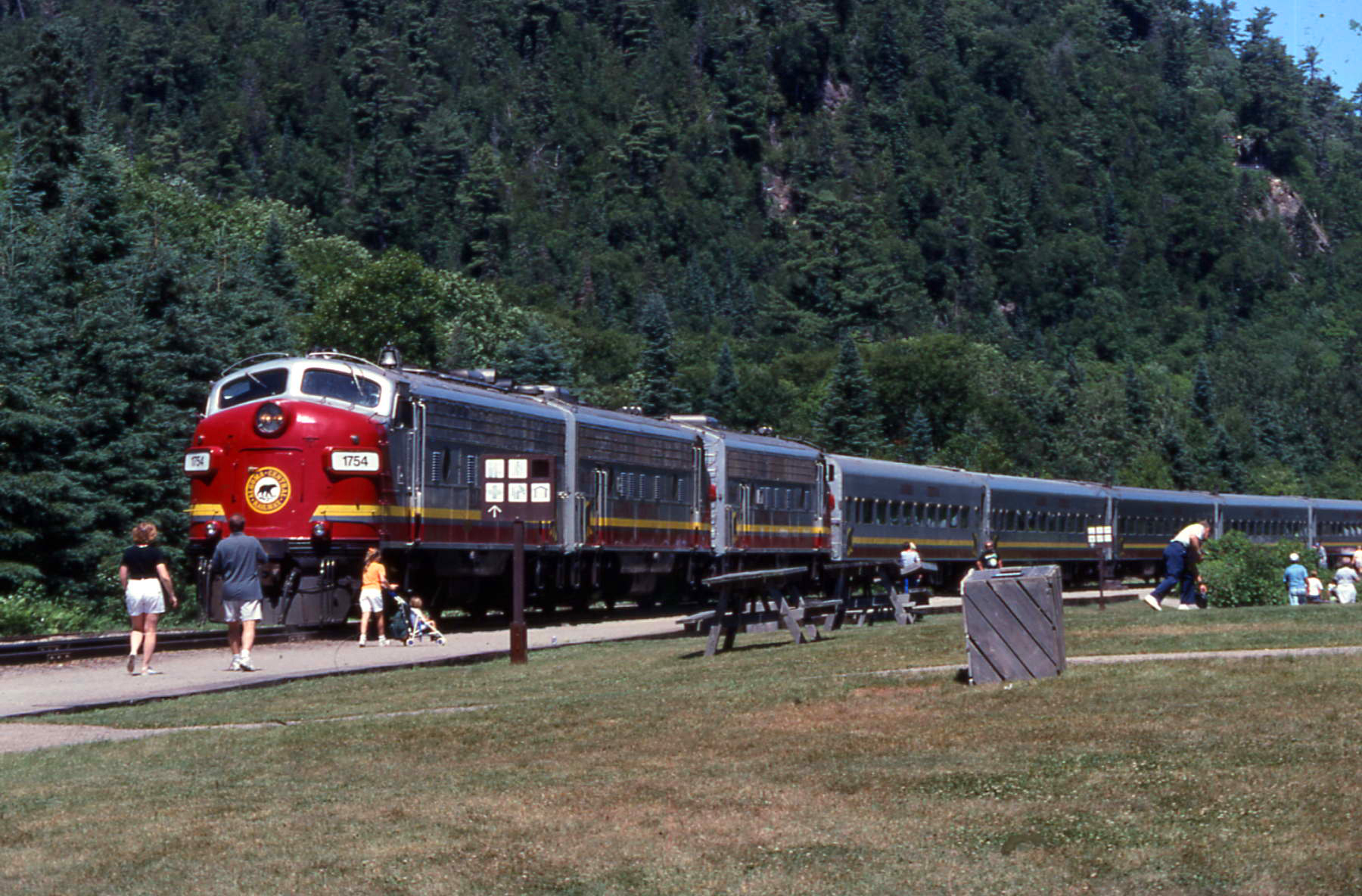 There was a wide range of other trains and packages including another popular run, the Snow Train.  Despite their success these trains were not profitable ventures losing upwards of a half-million dollars in some years although the Canadian government did provide much-needed subsidies covering 80% of the losses.

By 1990 the company's diversified holdings brought about another name change this time as the Algoma Central Corporation.  With the other divisions, especially real estate, earning the bulk of the revenues the company lost interest in its railroad division and sought potential buyers.

The Wisconsin Central stepped forward and purchased the property on February 1, 1995.  The WC was a growing, Class II "regional" operating a large block of trackage in Wisconsin deemed superfluous by the Soo Line during the 1980's.  As the railroad's success grew worried Class I's felt threatened by its potential.  In 2001, Canadian National acquired the WC, and as a result, the Algoma Central too.

The CN repeatedly threatened to shutdown the popular tourist train but ultimately never did.  In 2021 Watco stepped up and purchased the entire railroad from CN.  It has vowed to continue hosting the Agawa Canyon Tour Train.