While the Montreal/Boston-New York-Washington market was dominated by the Boston & Maine, Pennsy, Canadian National, and Central Vermont with trains such as the Montrealer/Washingtonian and Ambassador/New Englander there were others hosting services in this once lucrative market.

Not to be outdone by its long-time competitor the Canadian Pacific offered its Alouette/Red Wing; the former running during the daylight hours and the latter hosting an overnight schedule.  To reach Boston the CP worked with B&M via its downtown North Station.

Originally launched in the 1920s as separate trains the service remained on the timetable until the 1950s when the Red Wing was dropped and the Alouette lost its name.  The final remnant survived until the mid-1960s when it was discontinued altogether. 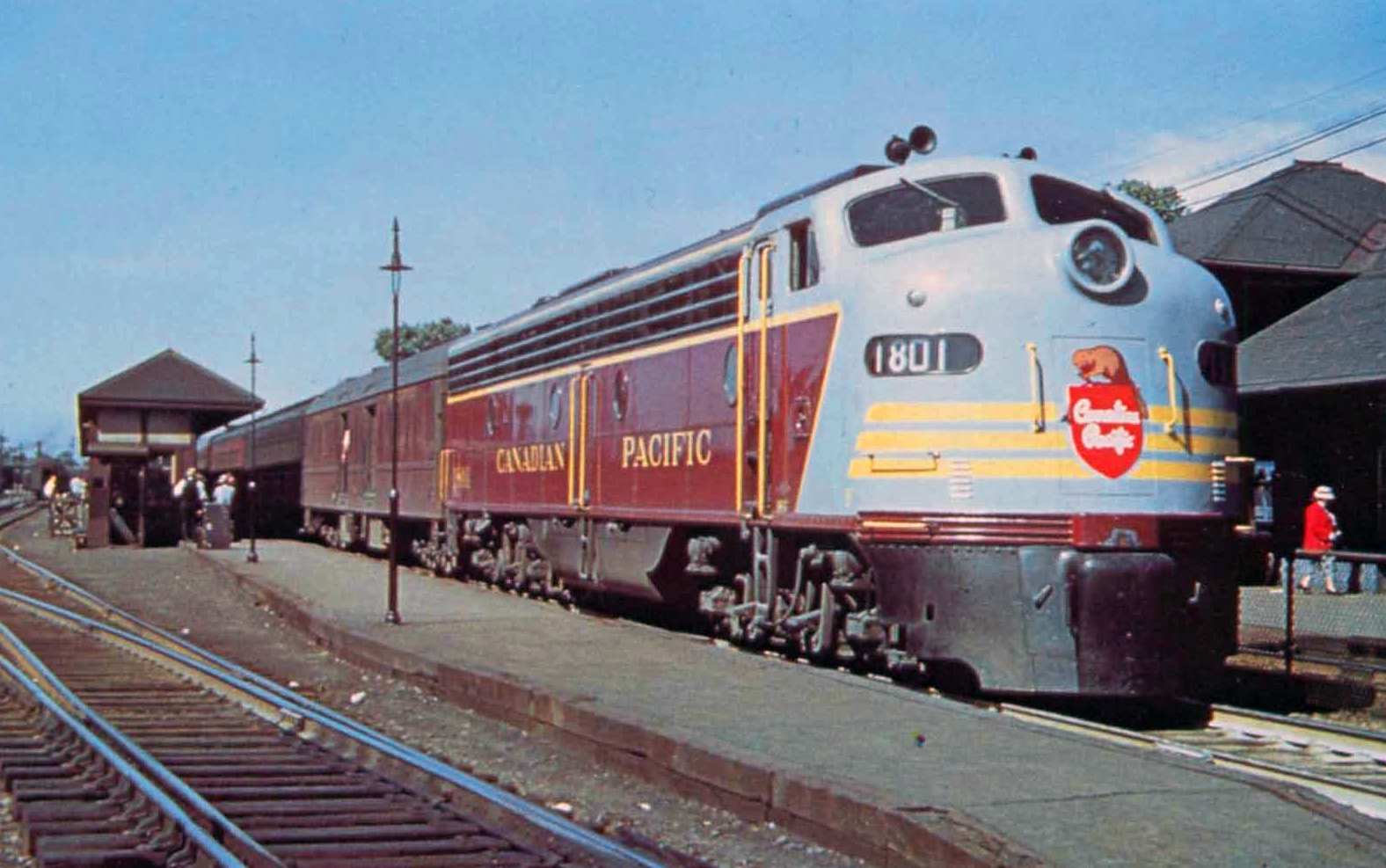 Canadian Pacific E8A #1801, one of only three the railroad owned, arrives in Westmount, Quebec with the "Alouette" from Boston during the 1950's. J. Norman Lowe photo.

The Alouette was first inaugurated by the Canadian Pacific on April 26, 1926 providing a schedule of just over 10 hours to complete the nearly 340-mile trip.  The northbound run left Boston around mid-morning and arrived at CP's beautiful Windsor Station in Montreal by mid-evening later that day.

Its southbound counterpart left Montreal just minutes earlier that evening and returned back to North Station by mid-morning the next day.  As a daytime train it provided passengers with parlor or coach seating and during the 1940s added the popular, buffet-parlor-observation (owned by Canadian Pacific).

This car featured the classic open-air platform so common with heavyweight observations from that era and even showcased its own, illuminated drumhead.

During the streamlined years it wasn't uncommon to see a B&M "American Flyer" or CP 2100-series lightweight coach within the consist. Before diesels took over the Alouette was normally led by one of CP's handsome Class G Pacific's north of Woodsville, New Hampshire, which could still be found heading the train on occasion through the late 1940s.

After steam service end new CP E8As wearing the road's classic maroon and grey livery (adorned with the beaver herald on the nose) were common power.

According to Kevin Holland's book, "Passenger Trains Of Northern New England, In The Streamline Era," the CP's line through Vermont was one of its first dieselized in 1949 when Alco RS2s, built with steam boilers for passenger service, began handling local branch operations.

Of note were Canadian Pacific's three E8As, #1800-1802; these were the only of their kind ever purchased by a Canadian road, intended to operate in conjunction with the B&M's fleet of twenty-one E7As (and a single E8A) that were regularly given passenger assignments from the mid-1940s forward. The original routing of the Alouette and Red Wing over the B&M saw the trains running via Woodsville, Plymouth, and Concord.

However, after this line was truncated in late 1954 interchange with CP took place at White River Junction, Vermont (coincidentally, the same location that B&M interchanged with CV and their rival Ambassador/New Englander and Montrealer/Washingtonian).  By then, disenchantment with passenger trains was growing rife with all parties involved.

During October of 1956 the Alouette lost its name becoming a diminutive service provided by Rail Diesel Cars (RDCs).  The B&M was especially fond of these Budd-built designs and came to own more than 100 examples under the leadership of Patrick McGinnis who believed they could provide quality service while significantly cutting costs in the process.

The now unnamed trains #5 and #20 continued to provide service until 1965 when they were finally discontinued.  The accompanying Red Wing would not live to see the 1960s.  The train's schedule was a bit slower than the Alouette, requiring close to twelve hours; the northbound run left Boston late in the evening and reached Montreal by breakfast the next morning.

Its southbound companion departed Windsor Station late in the evening as well and returned to Boston at nearly the same time the next morning.  Mr. Holland's book notes that by the streamlined era the B&M began combining the Red Wing and the New Englander south of White River Junction and before World War II had offered through sleeper service between Boston and Quebec City twice a week.

As ridership across New England declined through the 1950s, a result of better highways and more reliable automobiles enabling travelers to reach their intended destination within only a few hours, there was really no need for so many trains serving such a compact and declining market base.  With such growing disinterest in rail travel, especially overnight trains, CP and B&M discontinued the Red Wing during October of 1959.