The Alphabet Route was not actually an operating railroad. Instead, it was more or less a marketing tactic between eight Midwestern and Northeastern railroads to provide shippers a fast-freight alternative to the large eastern trunk lines, notably the New York Central, Erie, Pennsylvania Railroad, and Baltimore & Ohio.

While the four trunk lines could provide freight shipments via a direct route, thus reducing transit times, the eight Alphabet systems (so named for the number of railroads that took part in the operation) offered dedicated, friendly service that was competitive and flexible to shipper needs.

The tactic proved to be surprisingly successful and lasted for nearly 50 years despite the fact that during the last years of operation track conditions were deteriorating and companies were either entering bankruptcy or being merged into large systems (which ultimately ended the consortium). 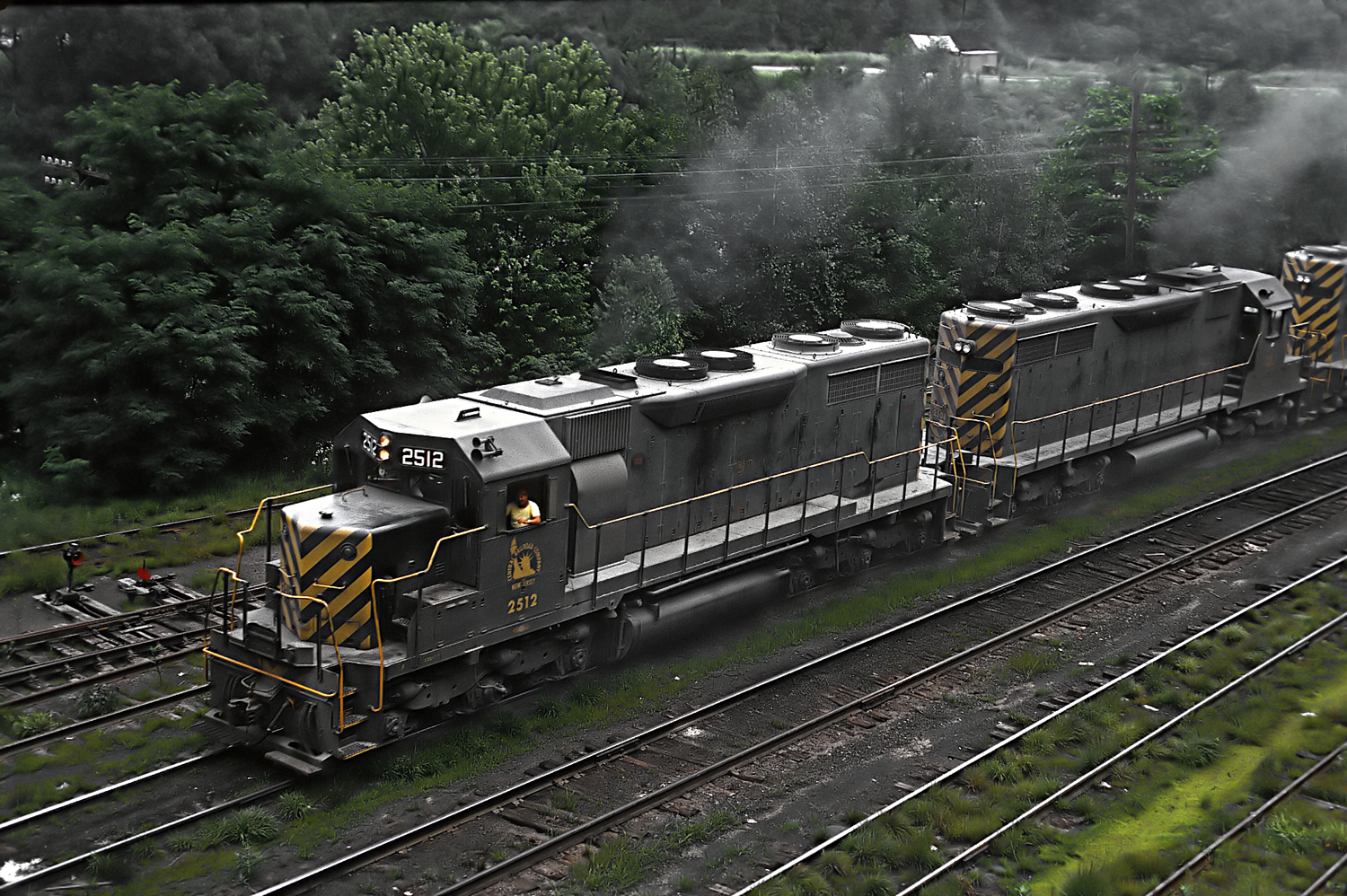 The history of the Alphabet Route began officially, in the spring of 1931 when the Pittsburgh & West Virginia completed its extension to Connellsville, Pennsylvania with the Western Maryland.

With the opening of this line all eight railroads formed a continuous main line between the Northeast's largest cities, New York and Boston, with the Midwest's largest, St. Louis and Chicago.

The high priority trains that ran-through on the Route were known as Alpha Jets and were nearly always the most important movements across all of the railroads, save for perhaps passenger trains themselves.

These trains were typically symbolled AJ-1 for westbound movements and AJ-2 for eastbound movements. They also carried additional designations for higher priority or some other reasoning and later featured slightly different classifications such as AJ-12, WAJ-1, and PAJ-1.

Heading from west to east the Route was made up of the following systems, including the territory covered:

The NKP carried trains from its Bellevue Yard, Ohio where there was a junction with the Wheeling & Lake Erie to both East St. Louis and Chicago.

The run to Chicago covered 275.6 miles over the Nickel Plate's main line to the Windy City while the distance to St. Louis covered 271.8 miles along its other main line (both of these figures are courtesy of the railroad's official timetable). 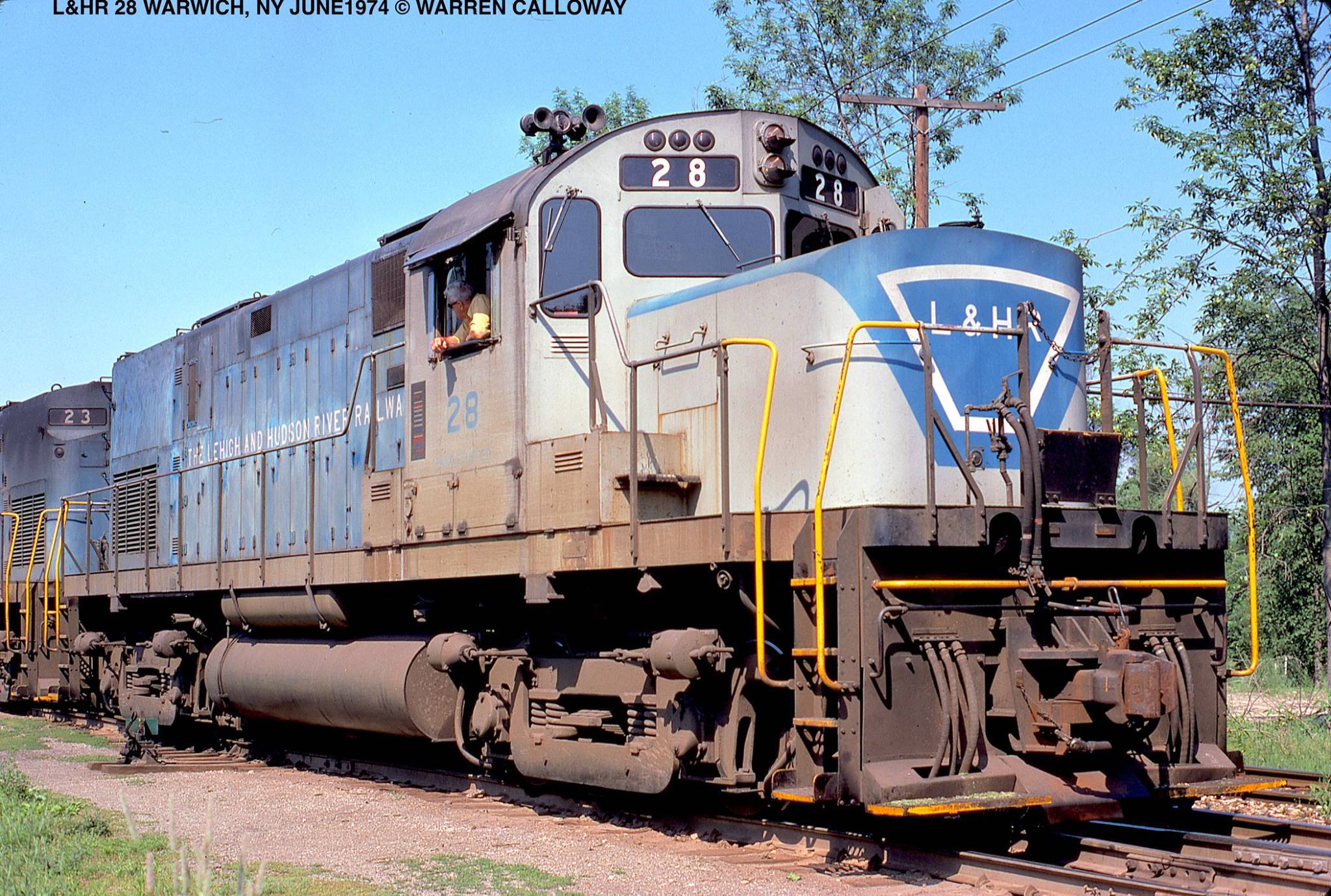 Lehigh & Hudson River C420 #28 at Warwick, New York during June of 1974. Today, most of the historic L&HR is abandoned. Warren Calloway photo.

The operations of the Alpha Jets on the W&LE were just a quick jaunt. From the NKP's Bellevue Yard they operated just 131 miles to Pittsburgh Junction, Ohio and a connection to the Pittsburgh & West Virginia Railway.

Here there were no major yards to navigate like with most of the other connections and trains passed through relatively quickly.

One benefit the P&WV carried, in terms of the Route, was that it could pass through Pittsburgh with somewhat ease.

The P&WV was also one of only two railroads among the group where the priority trains operated along the entire railroad, a distance of 132 between Pittsburgh Junction and Connellsville, Pennsylvania where the Alpha Jets where handed off to the Western Maryland.

The WM picked up the trains and continued heading east. Here, there was an added option for shippers. At Hagerstown, Maryland the Jets were forced to navigate the company's Jamison Yard, which also headed directly east to Baltimore.

The yard also served as a gathering point for expedited traffic arriving from both Baltimore as well as the Reading, which had assembled freight from other Northeastern points.

In any event, trains heading eastward towards the major Northeast cities met the Reading Railroad at Lurgan/Shippensburg, Pennsylvania (in later years this location was switched to York, Pennsylvania).  Freight traveling over the WM route varied in length:

From Lurgan freight continued eastward where it arrived at the Railroad's Rutherford Yard. Here, just as on the WM, freight was gathered from various points and assembled (Allentown, New York, and Philadelphia the latter of which arrived from the Reading's own line from the city).

From this points trains continued on until Reading and headed for either Philadelphia or a connection with the Jersey Central at Allentown.  Once more, freight traveling over the Reading route varied in length:

Under CNJ direction the Alpha Jets gathered or shipped freight to or from the Jersey City/New York City region. Additionally, those trains heading to Boston interchanged with the Lehigh & Hudson River at Easton, just a few miles east of the previous interchange at Allentown.

The L&HR was the other railroad were the Alpha Jets operated over the entire system, a distance of 85.8 miles to Maybrook, New York where a connection with the New Haven Railroad was established. This was also the location of the NYNH&H's Maybrook Yard where freight was further classified.

The New Haven carried the trains the rest of the way into Boston and also assembled freight at its Cedar Hill Yard in New Haven from other various points along its system.

The railroad enjoyed the longest end-to-end routing of these time freights east of Ohio and the Nickel Plate run.  Its corridor covered some 217 miles running the original Central New England corridor from Campbell Hall/Maybrook to Hartford, then on to Providence and Boston.

While the Route was typically 10 hours, or more, slower than service provided by the other eastern trunk lines it offered more flexibility by giving shippers the chance to have their freight delivered in either the evening or morning hours.

In later years as mergers became more commonplace the western end the system was entirely owned by the Norfolk & Western Railway as by the by late 1960s it owned the Nickel Plate, Wheeling & Lake Erie, and Pittsburgh & West Virginia Railway.

Additionally, Penn Central was forced to acquire the New Haven as a condition of its merger.  By doing so it seriously hurt the viability of the Route.

The PC's two largest predecessors, the NYC and PRR, had of course been a major competitor against the service and with its creation no longer had as much of a desire to see the routing continued.

The line slowly lost interest which was further compounded by the creation of the Chessie System (B&O, C&O, and WM) in 1972, and Conrail in the spring of 1976, that resulted in just three systems being a part of the route; N&W, Chessie, and Conrail. No longer adding any value the Route finally died away in the early 1980s.