While the Arkansas & Missouri Railroad (reporting marks, AM), based in Springdale, Arkansas is technically a Class III, short line railroad it largely operates as a Class I system with a well-maintained right-of-way, welded rail, and even new locomotives.

The railroad itself dates back to the 1980s when it took over approximately 140 miles of railroad owned by the Burlington Northern Railroad, which was originally a component of the old St. Louis-San Francisco Railway (better known as the Frisco).

This route was once a secondary Frisco line, providing service to Texas.  Under the Arkansas & Missouri's direction the corridor was prospered and grown into a very successful operation.

So successful, in fact, the company purchased new SD70ACe locomotives in 2013.  Needless to say, the future looks very good for the A&M.

To the general public the A&M is most well-known for its passenger excursions, operating four days a week between Springdale, Winslow and Van Buren, Arkansas from March through November.

These trips are quite rare because of their length; at over 60 miles it is one of the longest you can enjoy unless booking a long-distance Amtrak train, the nation's passenger rail service. 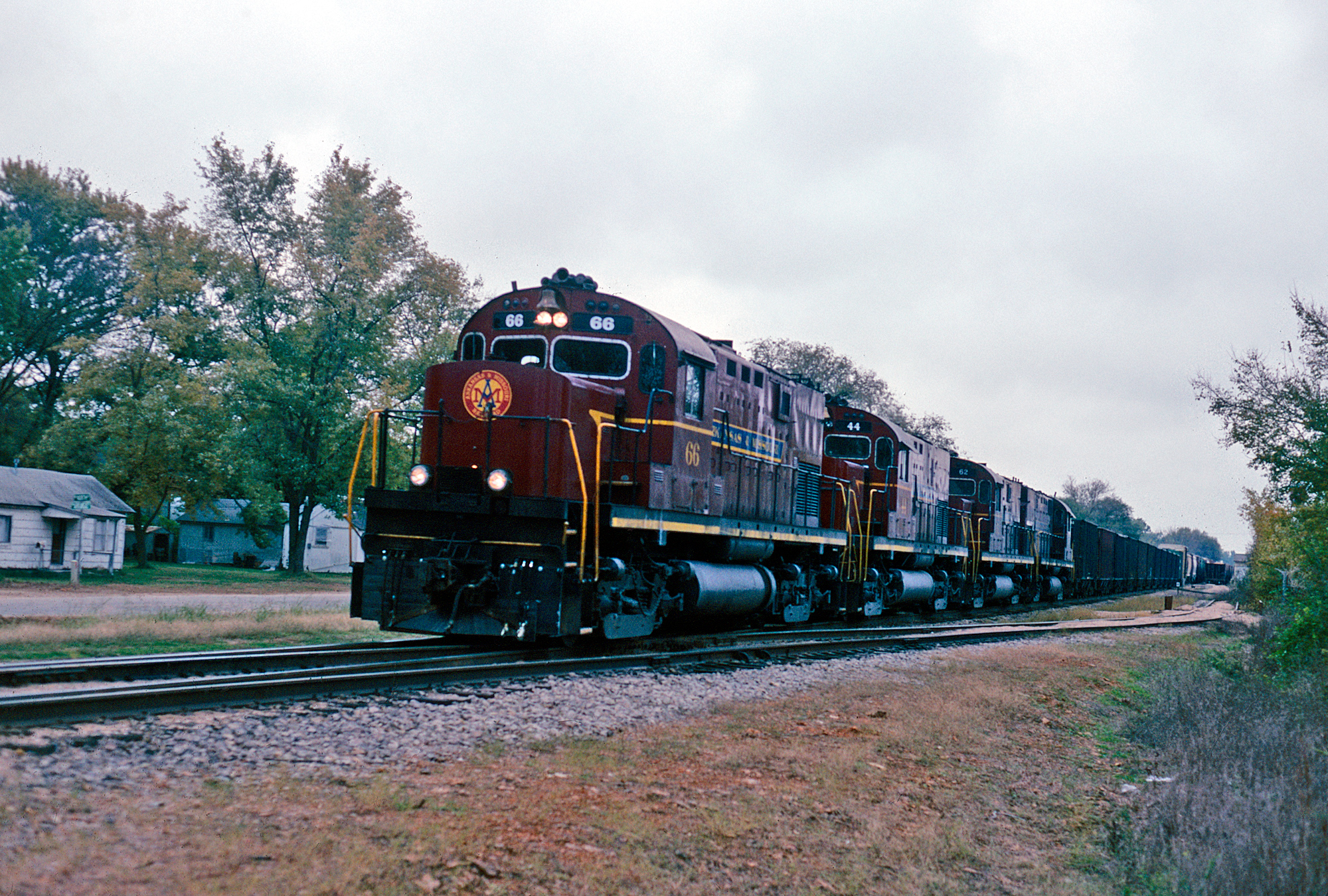 A quartet of the Arkansas & Missouri's classic C420's, led by #66, are seen here in service during the fall of 2010. The railroad's Alco roster has largely been retired. American-Rails.com collection.

A Brief History Of The Arkansas & Missouri

The history of the Arkansas and Missouri Railroad begins in 1986 when western giant Burlington Northern looked to shed trackage that it saw as redundant, with one of these lines being the Frisco's former route between Monett, Missouri and Paris, Texas.

The St. Louis-San Francisco Railway was Midwestern system that stretched from St. Louis to the deep south and as far west as Texas.

The company had an interesting, if a somewhat "roller coaster"-like history dating back to the Pacific Railroad of 1849.

In the 1860s it was renamed as the St. Louis & San Francisco Railway with an expectation of connected its namesake cities and actually reached into California by the late 19th century. However, after a lost fight with the Atchison, Topeka & Santa Fe the Frisco lost its California connection.

Perhaps most interesting is that despite the St. Louis-San Francisco Railway went through a number of bankruptcies and name changes during its history, it was actually quite profitable in its final years.

By the 1970s, the Frisco served numerous petroleum and chemical industries along its lines in Mississippi, Texas, and Alabama. 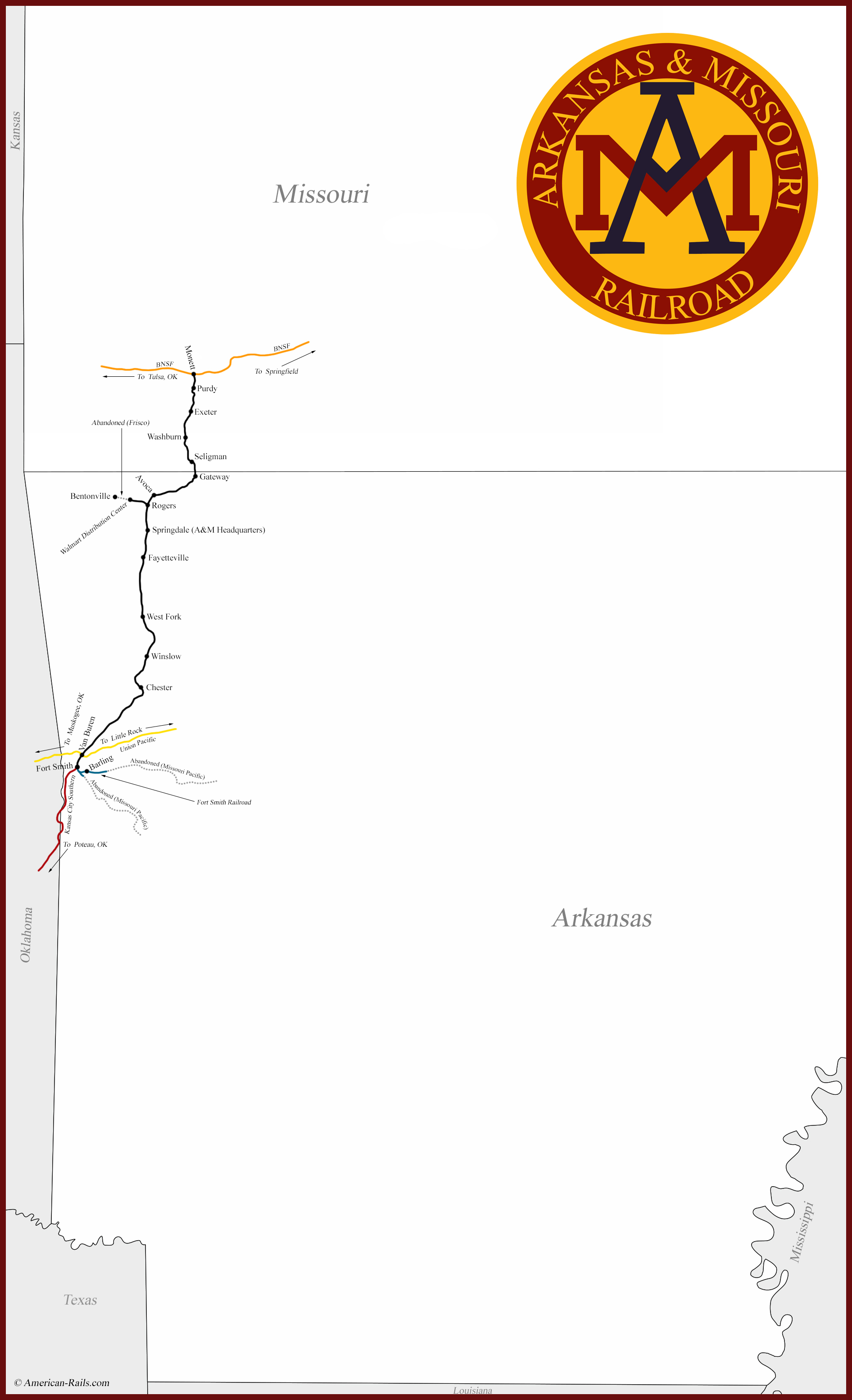 When the BN sold the former Frisco line to the Arkansas and Missouri Railroad, it turned over about half of the route to the new short line.

In total, the A&M received exactly 133.6 miles of main line from Monett, Missouri (at milepost 0.0 and a connection with BN, today the BNSF Railway) to Fort Smith, Arkansas (at milepost 133.6).

Additionally, it was granted the branch from Bentonville Branch Junction (Rogers) and Bentonville, totaling 5.7 miles length. In all, the A&M began as a 139.4-mile railroad.

Today, the A&M has upgraded the route to continuous welded rail (CWR), enabling it to handle the heaviest freight cars the industry now offers (286,000 pounds).

Near Fort Smith the A&M also now leases about 3.2 miles of track from Union Pacific to serve nearby customers and overall has interchanges with BNSF, UP, and Kansas City Southern.

It carries a wide variety of traffic today from steel, lumber, aluminum and food to plastics, sand, livestock feed, and paper.

All in all, the A&M affords some spectacular views of northwestern Arkansas that would not be available to us, the general public to see if it were not for the kindness and devotion of the railroad to put together its annual excursion trains.

According to the railroad their three different excursions include:

Perhaps most interesting for railfans was the A&M's once all-Alco fleet of locomotives. 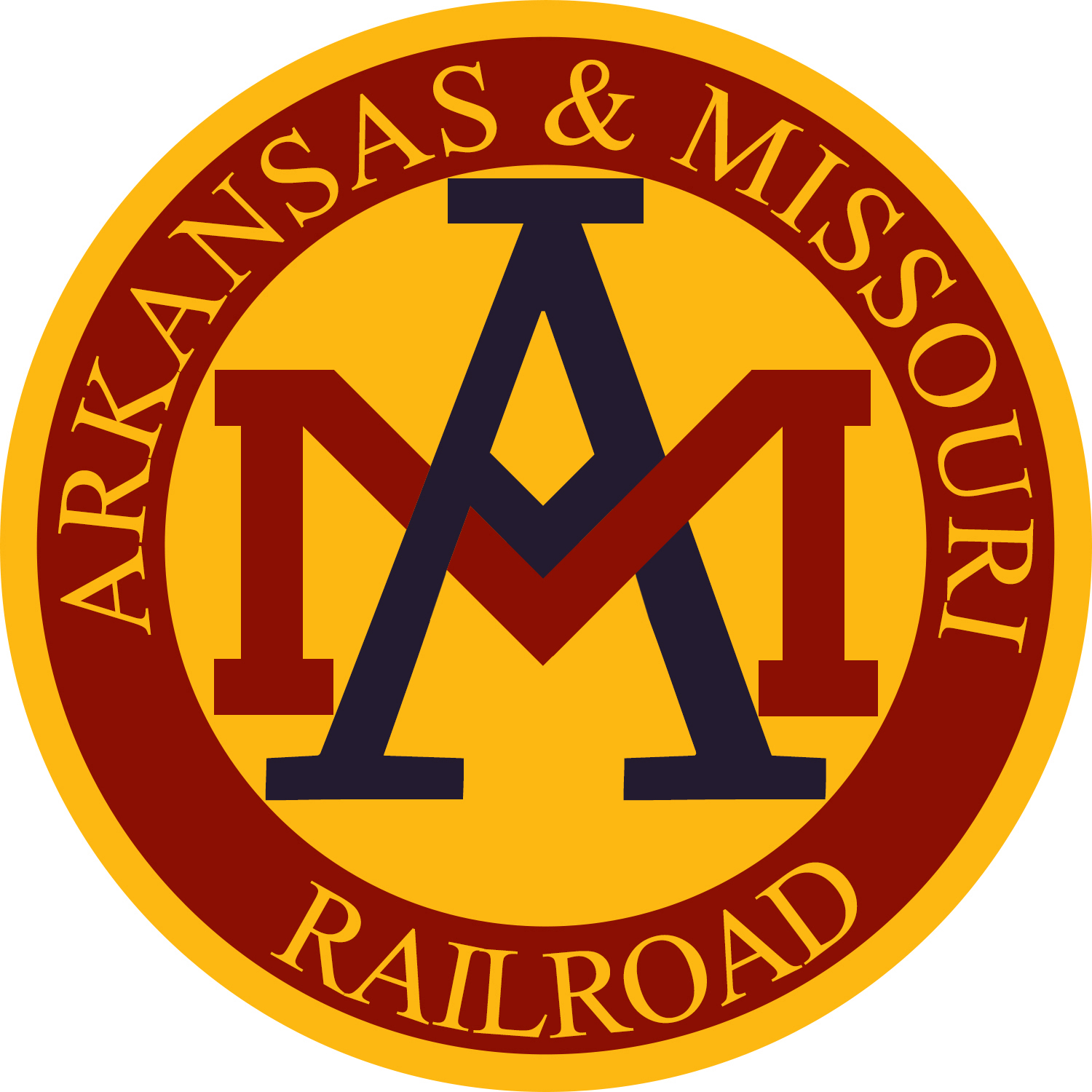 These consisted primarily of C420 models although it also rosters T6s, and RS1, an RS32, two C424s, and M420s (built by the Montreal Locomotive Works).

The heritage of these locomotives ranged from the Lehigh & Hudson River and Lehigh Valley to Canadian National and Seaboard Air Line.

The future of this classic power, however, is in jeopardy as the railroad announced in July of 2013 that it was purchasing three new SD70ACe's from Electro-Motive, former demonstrators #1201-1203.

These new units have been a boon for the A&M providing increased horsepower and greater fuel efficiency which has enabled the railroad to save tremendously on overhead costs while moving more freight.

Unfortunately, only a year after receiving the locomotives all three were involved in a derailment during October, 2014.  The units were slightly scuffed up and damaged but soon returned to service.

While the A&M plans to retire or sell many of its Alco's, most remain on the property as of this writing (2020).  If you are planning a trip aboard the A&M it is quite an experience, aside from just the great scenery.

Riding the railroad will also offer you the rare experience of actually getting to see a working freight railroad in action, something not afforded on most other excursion trains!