The Ann Arbor Railroad (AA) today is not the original company started in the late 19th century although it continues to bear the familiar orange paint that the Ann Arbor was so famous for.

Much like the Wheeling & Lake Erie Railway which was officially dissolved and whose name was later resurrected, so is the case with the Ann Arbor.

The "Annie," as the road came to be affectionately known, was the vision of a man who believed a profitable railroad could be operated between Lake Michigan and Lake Erie.

For many years this held true until traffic dried up after World War II.

Following a handful of different owners (most notably the Wabash and Detroit, Toledo & Ironton) over the years by different railroads the Annie was acquired by the state of Michigan in the late 1970s to preserve rail service throughout the region.

Today, most of the original main line is still in use (thanks to the state of Michigan's foresight) and what is today known as the revived Ann Arbor Railroad, a division of the Watco Companies, LLC, continues to maintain service over the original AA main line between Toledo, Ohio and Ann Arbor, Michigan. 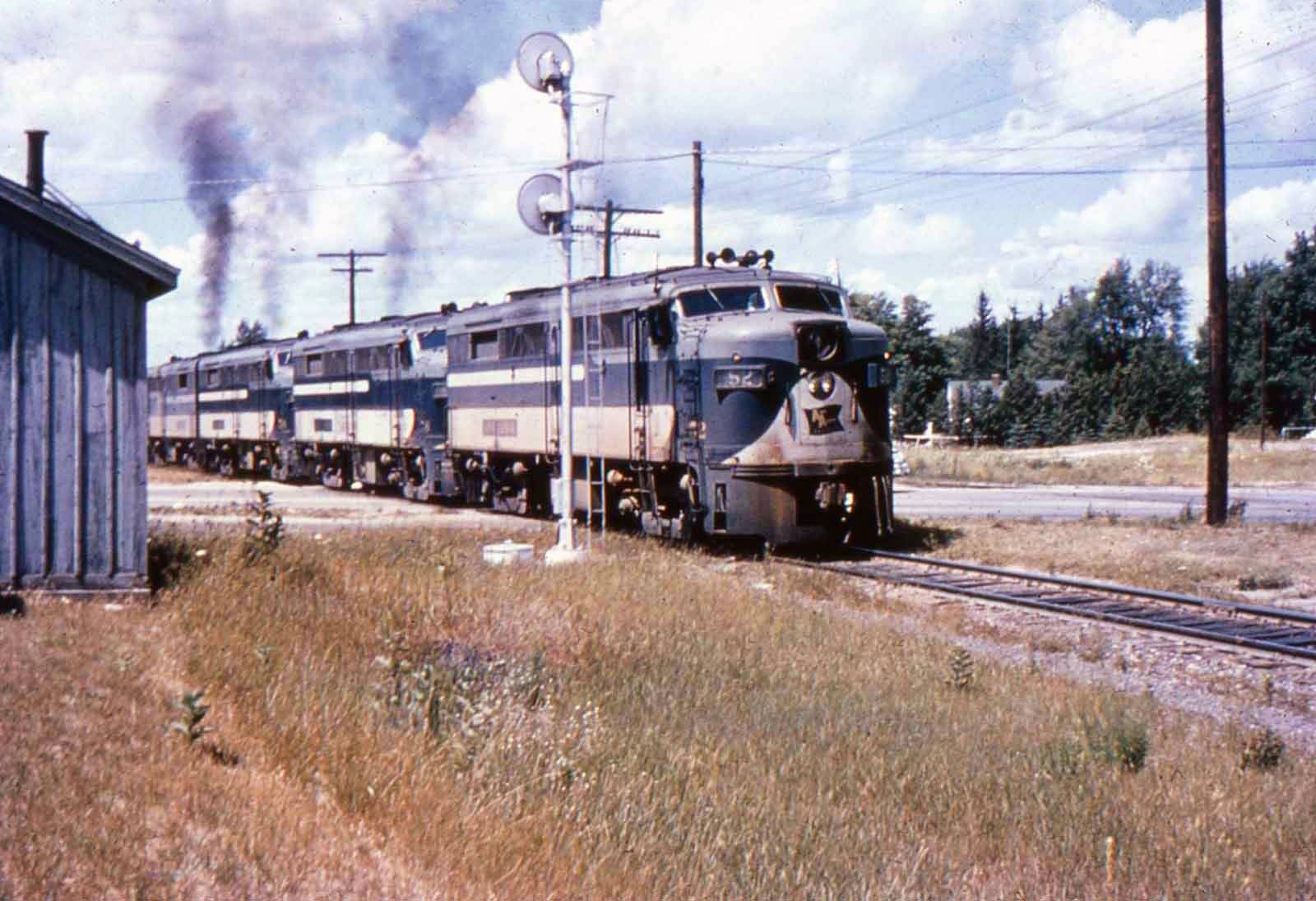 Several of Ann Arbor's first-generation FA-2's are on the move through Clare, Michigan circa 1950's. The "Annie" was a loyal Alco customer until GP35's arrived in the 1960's. Photographer unknown.

The Ann Arbor Railroad has had an up and down history, mostly being owned by other railroads or entities. Perhaps the railroad is best remembered for its car float operations which originated at Frankfort, Michigan and sprawled out north and west to the UP of Michigan and eastern Wisconsin across Lake Michigan.

The history of railroads that would later comprise the classic Annie can be traced well back into the 19th century.  However, it was not until James M. Ashley (he as a governor and congressman before entering the railroad industry) arrived that true progress began.

With several major Midwestern systems spanning from east to west (like the Pere Marquette, Wabash, and Michigan Central/New York Central) Ashley believed that a profitable and viable railroad could be established to not only move interchange traffic from these lines but also carferry movements along Lake Michigan.

He also believed that these carferry movements would act as a much faster bypass around the busy, and growing rail hub of Chicago.

And so, he set off on his new venture in 1876 by acquiring the defunct Toledo, Ann Arbor & Northern Railroad (TAA&N), a line chartered in 1871 but never built between Alexis (Toledo), Ohio and Ann Arbor due to the 1873 Financial Panic. 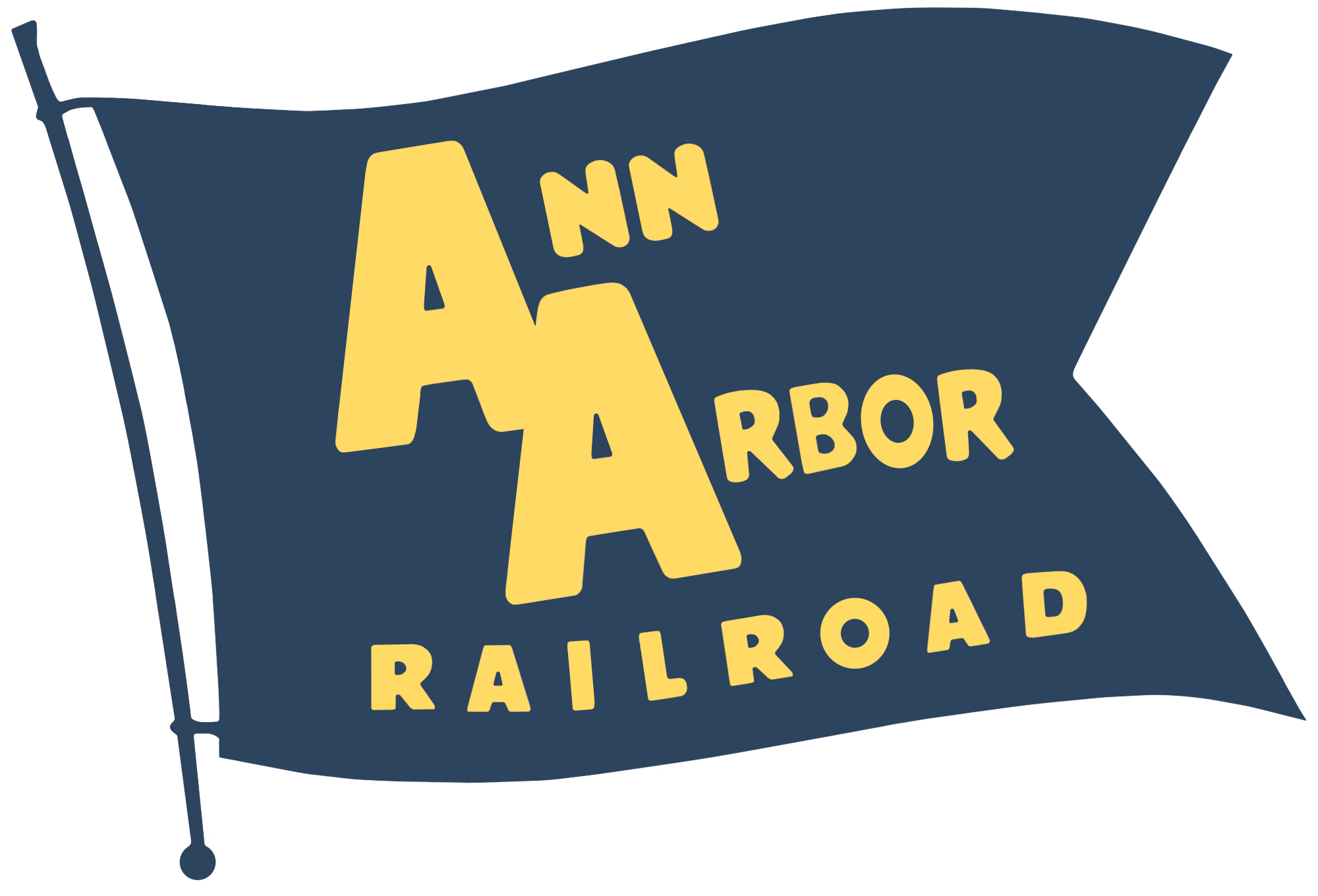 He quickly renamed the company as the Toledo & Ann Arbor Railroad (T&AA) opening the 45.2-mile corridor between the two cities by 1877. 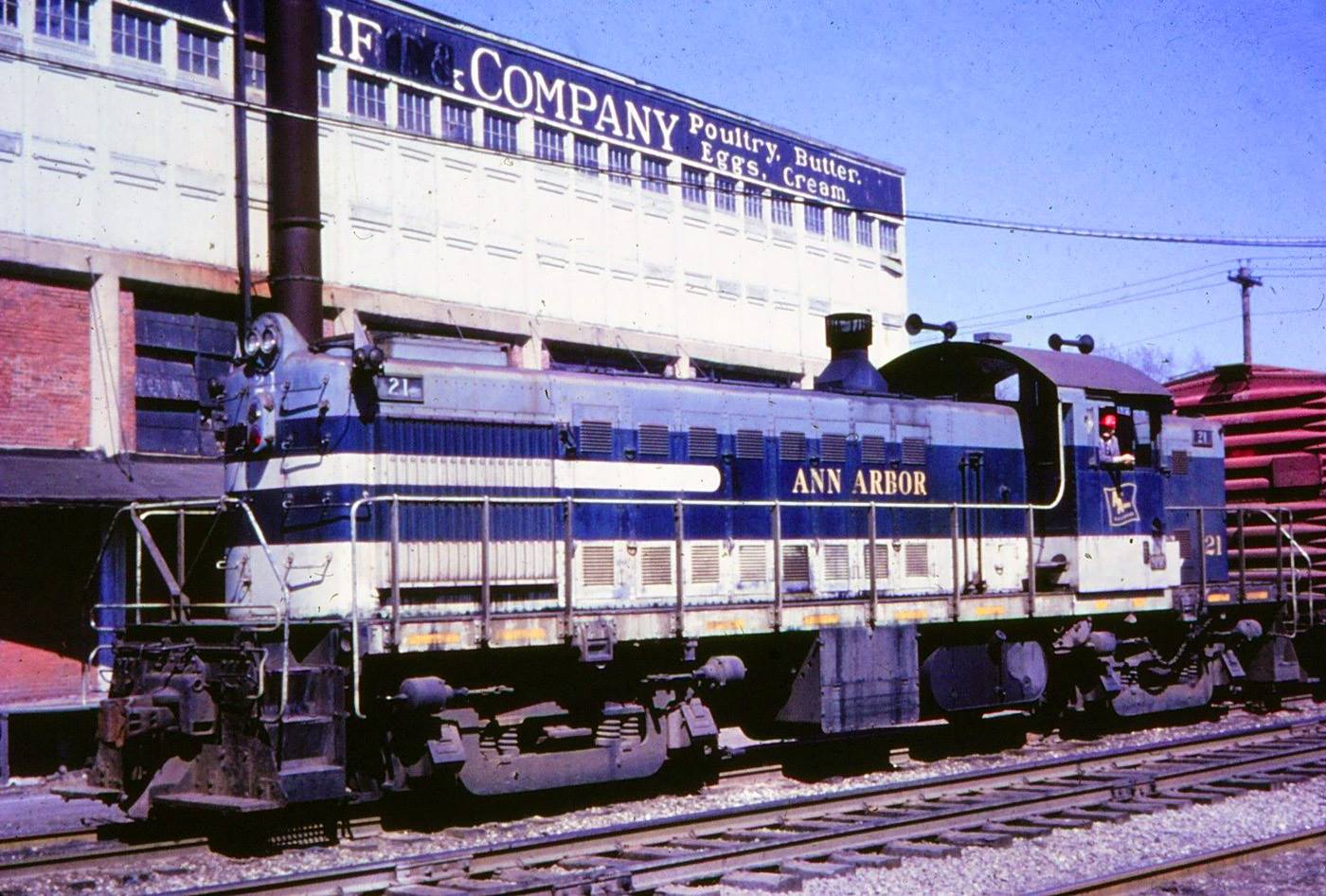 Ann Arbor RS1 #21 circa 1950s. The Annie purchased two of these from Alco in 1950 (#20). The road was under Wabash control until the early 1960s and as a result, new diesels acquired in the 1950s carried a Wabash-inspired livery. In this scene the unit appears to be performing switching chores somewhere on the Wabash system.

Following the completion of this section of the system things moved along rather quickly despite the fact that Ashley often chose the worst alignments in which to build his line, such as choosing swampy ground in which to lay rails or incorporating needless sharp curves into the railroad (these were later improved with better alignments following new ownership). 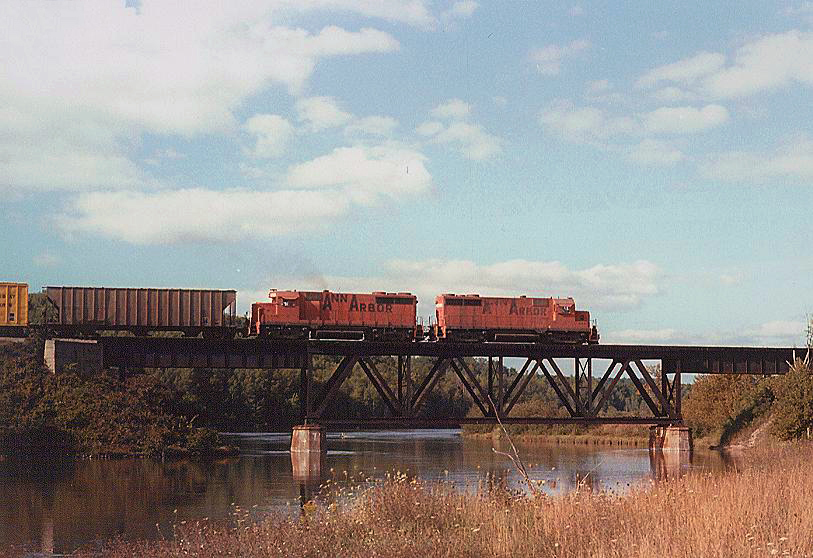 The same train as seen at the top of the page crosses the Manistee River near Mesick, Michigan. Doug Kroll photo.

Unfortunately for Ashley, his role in the railroad ended just a few years following the line's completion due to the Financial Panic of 1893, a company strike, and poor business decisions.

It was during this bankruptcy that the railroad saw alignment changes and updates to the property, afterward boasting a main line of 290.7 miles between Toledo and Frankfort, according to its timetable. 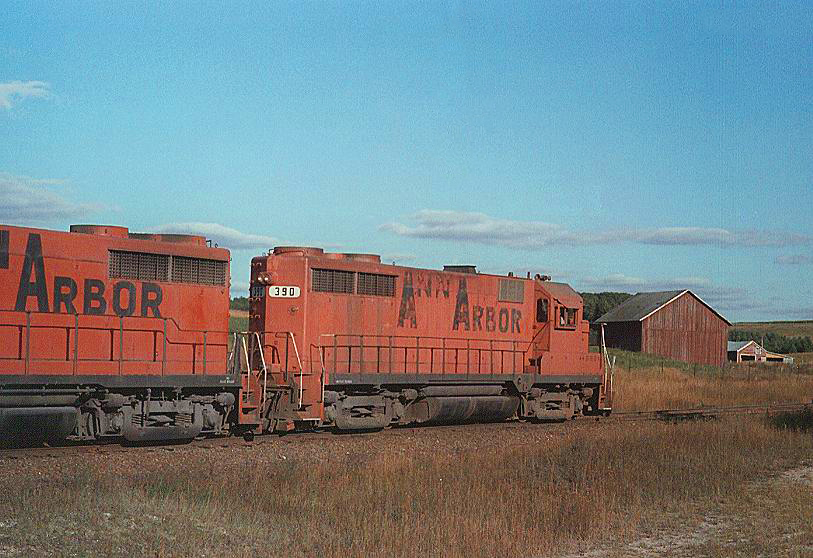 A pair of Ann Arbor GP35's have the southbound "Cadillac Turn" near rural Boon, Michigan on September 8, 1979. Doug Kroll photo.

On September 21, 1895 the property was reorganized as the Ann Arbor Railroad to take over the bankrupt operations of the TAA&N.  However, even the new AA struggled to find a stable, steady, and healthy flow of freight traffic.

In 1911, in an effort to grow its business the railroad purchased the small Manistique & Lake Superior Railroad (M&LS), which operated on the Upper Peninsula between Manistique and Munising. 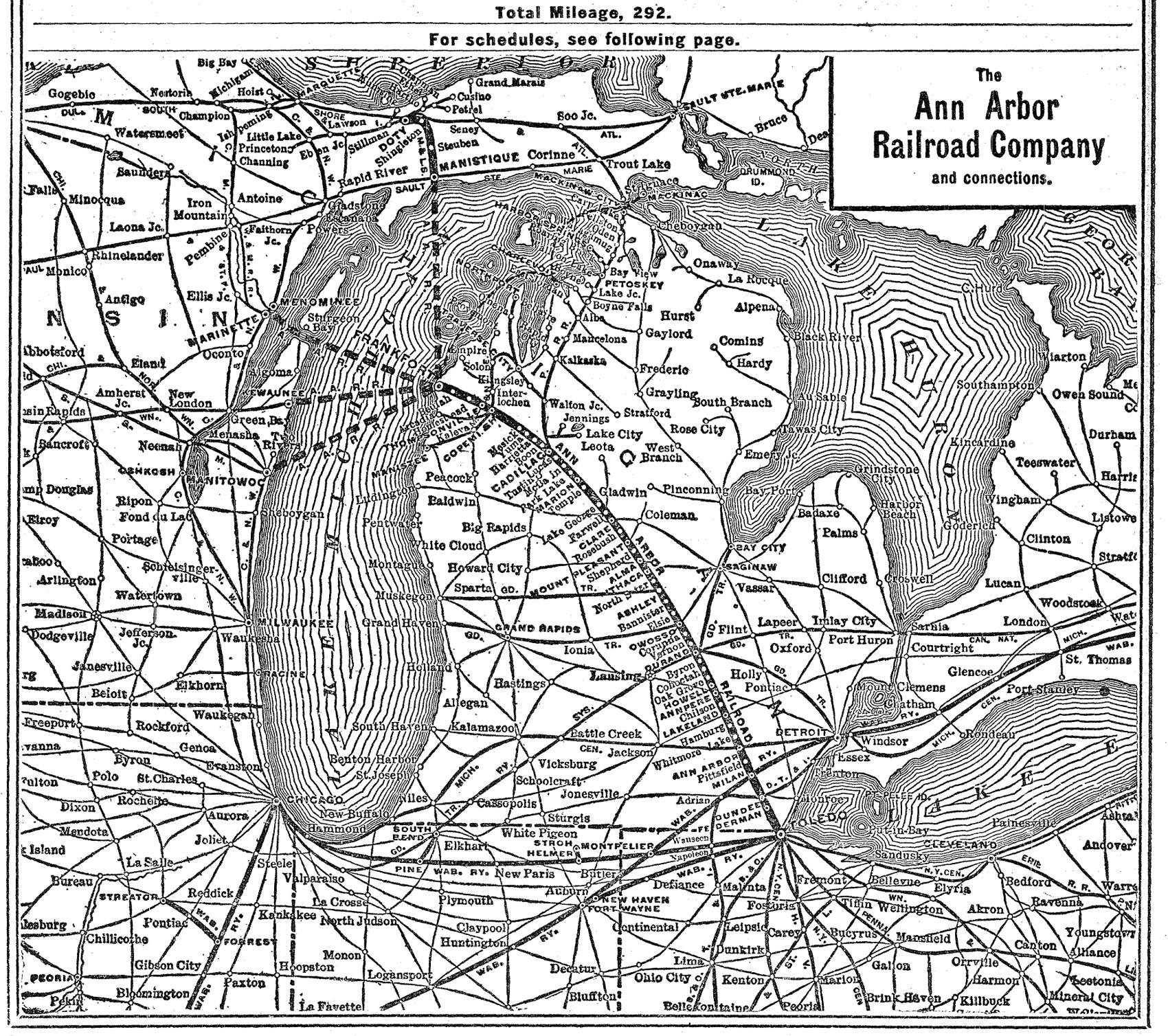 An official, 1940 system map of the Ann Arbor Railroad

The M&LS provided the AA primarily with timber-based traffic and added an additional carferry run from Frankfort to Manistique (the other three ran to Kewaunee and Manitowoc, Wisconsin along with a connection to Memominee, Michigan where the Annie interchanged with the Chicago & North Western, Milwaukee Road, Green Bay & Western, and Soo Line). 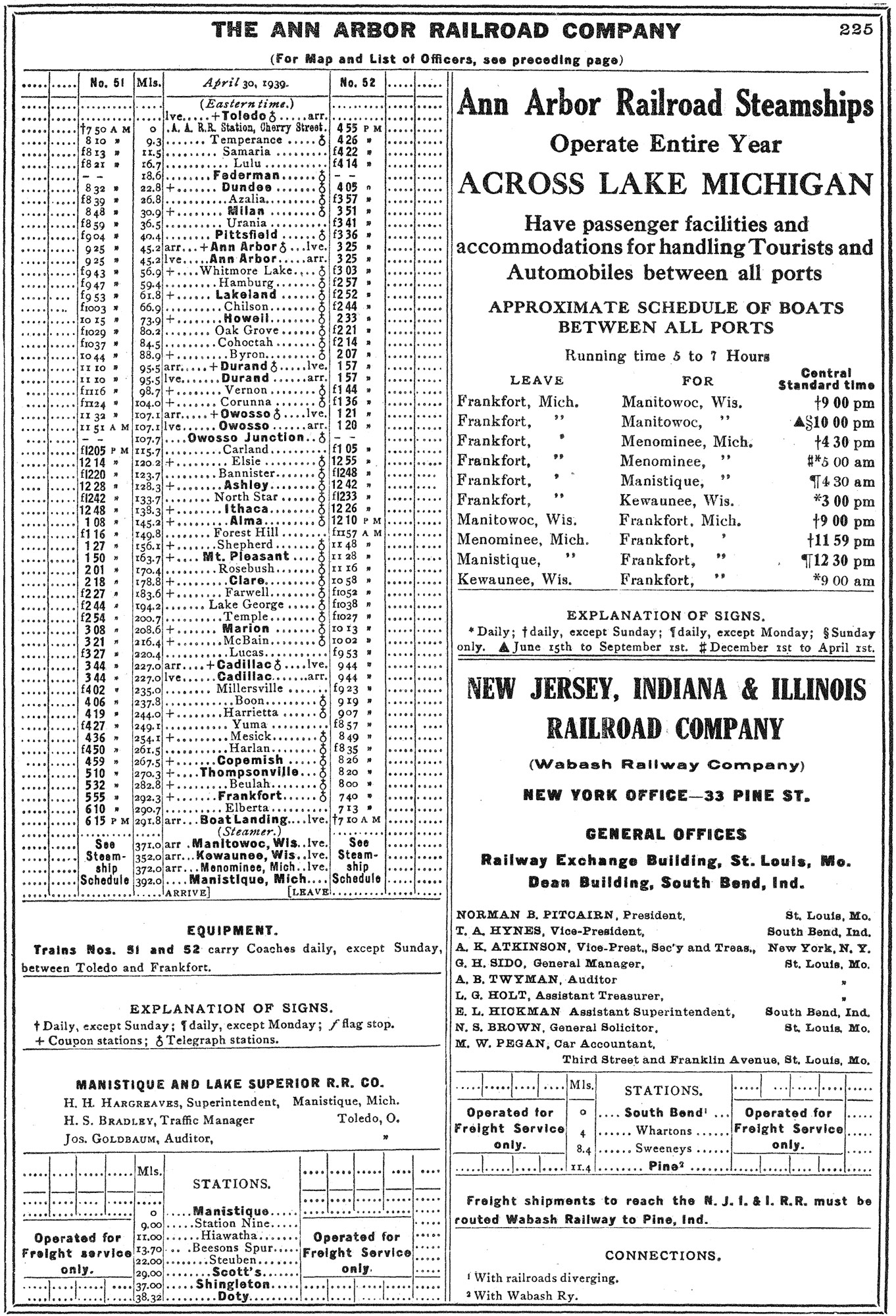 The Ann Arbor Railroad, from the 1940 Official Guide

In 1925 independent operations ended for the Ann Arbor as it came under the control of the Wabash Railroad that year.

During this time the Annie saw another bankruptcy in 1939 due to the ongoing depression from which it emerged as the Ann Arbor Railway.   Additionally, passenger operations were shed quite early with the final run occurring on July 19, 1950.

The AA remained an extension of the Wabash until 1963 when, due to declining traffic tonnage the Wabash sold the property to the Detroit, Toledo & Ironton.

The railroad did not fair much better under DT&I ownership as it saw its M&LS abandoned in 1968 because of falling freight traffic.  The DT&I was, in turn, owned by the Pennsylvania Railroad and when the PRR and NYC decided to merge in 1968 the Ann Arbor's future looked rather bleak.

In 1974 the AA entered bankruptcy and because of its affiliation with the PC debacle it became part of Conrail in 1976.  For the Ann Arbor's sake, fortunately this is when its luck changed. 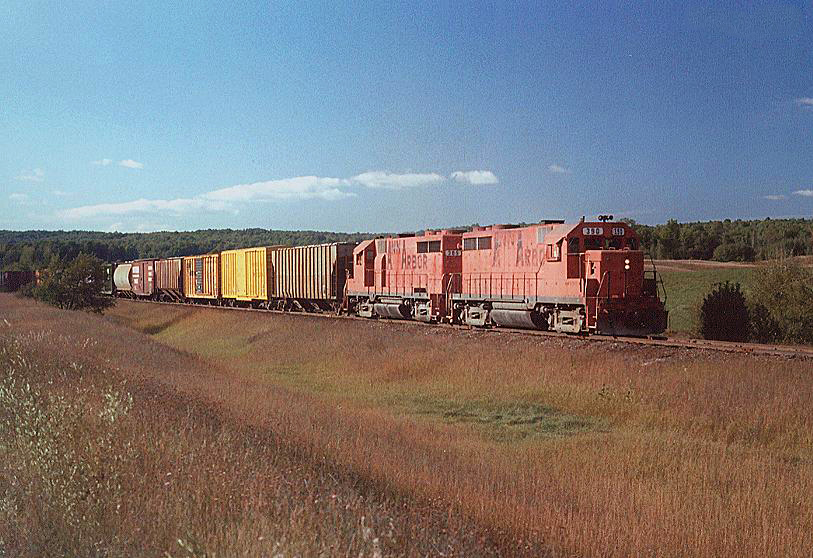 In an attempt to ensure the line’s stability and future, the State of Michigan stepped in and purchased the entire Ann Arbor Railroad in 1976 (it also added its car float operations in 1980 although they were discontinued in 1982).

In early 2013 Watco Companies completed their purchase of the Ann Arbor and now owns the line.   The Ann Arbor has had quite an interesting history to say the least but it continues to survive and proudly serve its state, giving customers along its an added rail option when shipping their products.