Arkansas Railroads: From 1858 Through Today

Arkansas, known for its beautiful, rugged topography and gorgeous rivers, has seen its share of trains since the mid-19th century.

Over the years the state would become home to several railroads, which operated through or within its borders, including four classic, "fallen flags".

Sadly, abandonments have led to half of the state's rail mileage being removed.  Most was pulled up after the 1970's.

Much of the cutbacks were branches and secondary corridors serving either agricultural interests or small towns situated at the end of the line.

One of the most well-known corridors removed was the Rock Island's famous Choctaw Route, which began at Memphis and cut across Arkansas on its way to Tucumcari, New Mexico.

Nevertheless, Arkansas is still home to some twenty-six different railroads; four Class Is (including Amtrak), one regional, and twenty-one short lines. Along with operating freight lines, the state is also home to several railroad museums and tourist lines.

In any event, the information listed on this page gives a general overview of Arkansas railroads, the state's history with trains, and its current operations. 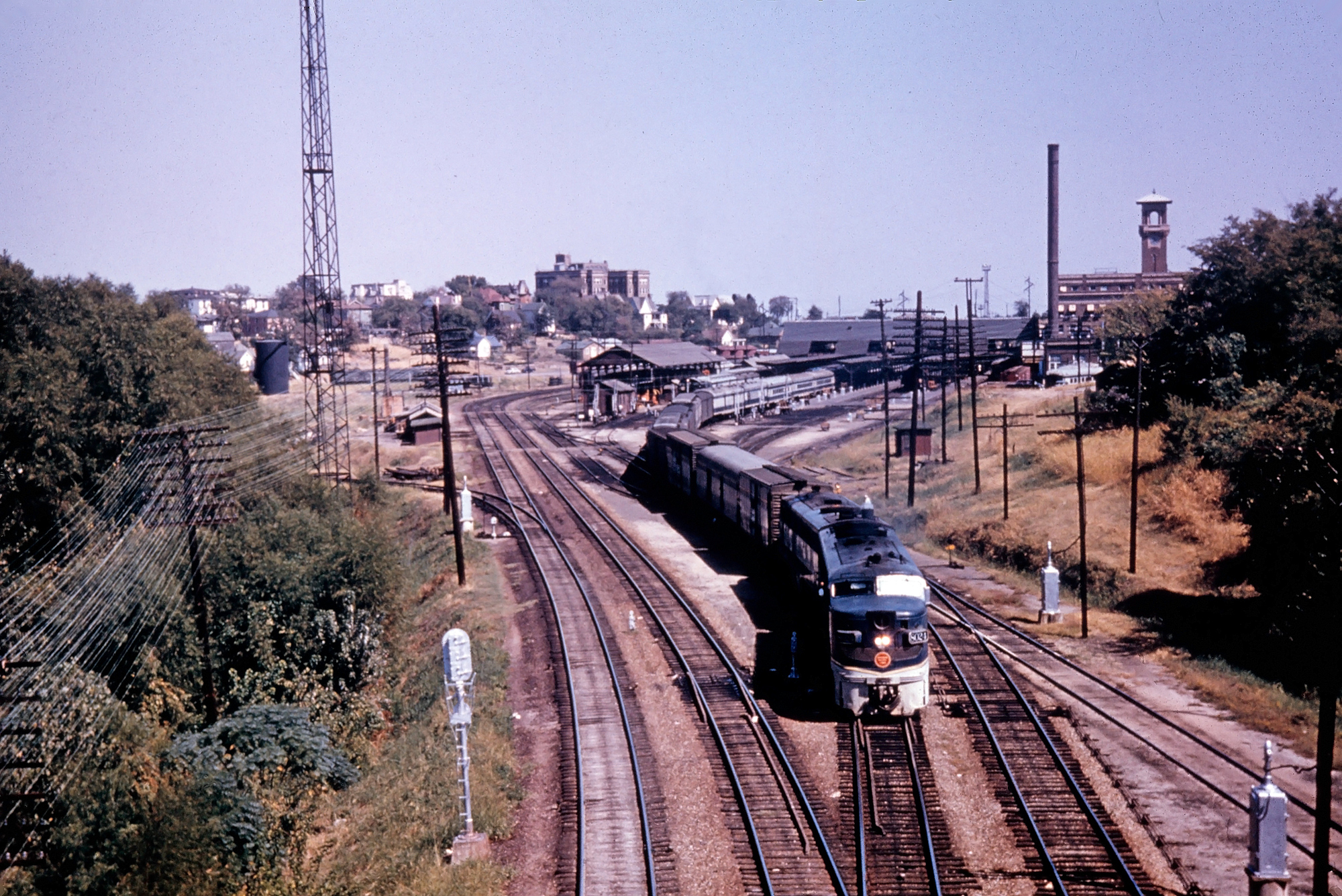 Railroads here have their history dating back to January 10, 1853 when the Memphis & Little Rock chartered by the state of Arkansas.

Eventually, the company would complete its 133-mile main line between its namesake cities by 1871 (it was originally built as a five-foot gauge system).

After numerous bankruptcies the M&LR route eventually was purchased by the Choctaw, Oklahoma, & Gulf Railroad (the Choctaw Route) in 1900 and this company would later become part of the Chicago, Rock Island & Pacific Railroad system (Rock Island).

As the years progressed so did the state's railroad mileage, which quickly surpassed 800 by 1880.

Of these railroads the Missouri Pacific by far had the most trackage in the state and the Union Pacific Railroad today operates nearly half of the state's total route mileage thanks in large part to the MP's heavy concentration in Arkansas.

Although the state's railroads have been reduced in number through mergers and acquisitions it is still home to three systems; Union Pacific, BNSF Railway, and Kansas City Southern Railway.

Today, while UP dominates much of the state BNSF has trackage rights on UP between Texas and Memphis and two lines between St. Louis and Springfield, Missouri.

Arkansas has been hit hard by abandonments since its rail mileage peaked in the 1920's; 2,500 miles have been removed since that time.

Every large system to reach Arkansas has witnessed at least a few miles abandoned such as the Missouri Pacific (which blanketed the state), Rock Island, Cotton Belt, and Frisco.

The state's notable losses include part of the Rock Island's fabled "Choctaw Route," which once linked Memphis with the Southwest (via Tucumcari, New Mexico and Southern Pacific) as well as much of the old Ashley, Drew & Northern.

The AD&N was a classic short line that predominantly handled timber products between Monticello and Crossett.  Most of the route was abandoned by owner Georgia Pacific in 1995.

KCS's mainline also runs along Arkansas' western edge and is home to the railroad's steepest grade at Rich Mountain. 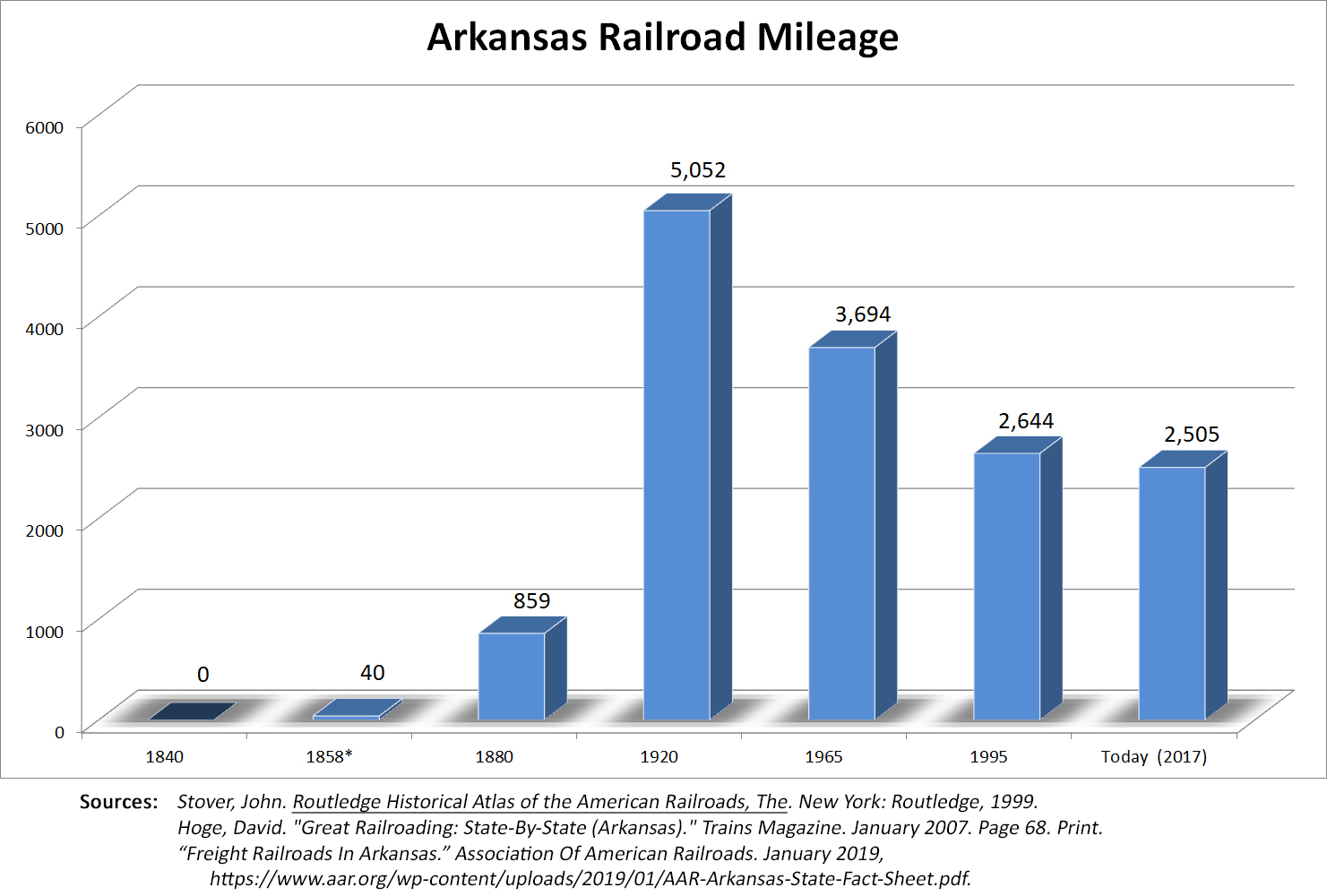 * Arkansas's first railroad was the Memphis & Little Rock to connect Hopefield (along the Mississippi River's west bank from downtown Memphis, Tennessee) with Little Rock on the Arkansas River.   It opened its first segment in July, 1857 when the locomotive "Little Rock" handled six bales of cotton and offered excursions to dignitaries.  However, according to the book, "The Governor's Of Arkansas" (edited by Timothy B. Donovan and Willard B. Gatewood, Jr.) the road's official opening occurred on November 11, 1858 when the first 40 miles to Madison, along the St. Francis River, opened for freight and passenger service.  The M&LR went on to become part of Chicago, Rock Island & Pacific's fabled "Choctaw Route."

For a more in-depth look at Arkansas's rail mileage over the years please refer to the table above.

During the state's heyday it saw a rail network that stretched more than 5,000 miles. However, today that number has fallen to just over 2,700 miles.

An Arkansas railroad map from 1975, produced by the U.S. Geological Survey. It shows most of the state's corridors still active prior to major abandonments during the 1980's and 1990's. Author's collection.

At a loss of 48% of its railroad infrastructure, Arkansas's decline is not unusual as most states experienced similar decreases.

Arkansas used to be home to several well-known passenger trains including the MoPac's Texas Eagle and KCS's Southern Belle.

Today, however, the state is home to just one through passenger train, Amtrak's continued Texas Eagle, which makes five different stops across the state.

Along with Arkansas's railroads, the state also features a number of excursion lines and museums available to see.

So, if you are either a vacationer interested in something to do or someone with a serious interest in railroads you may want to check them out.

With everything Arkansas railroads have to offer, from short lines to Class Is, a trip to see the Natural State is well worth it!