The Bangor and Aroostook Railroad was a company synonymous with Maine.  Its entire network of more than 800 miles was all located within the Pine Tree State's borders from Bangor to Van Buren.

The BAR is a relatively recent fallen flag considering most classic lines disappeared decades ago.

Throughout its corporate existence the road relied heavily on agriculture and wood products.  When its potato crop was lost during the late 1960s, a result of Penn Central’s horrific service, it struggled to make ends meet.

Following several different owners and an attempt to survive on the remaining paper and lumber business its last parent, Iron Road Railways, declared the railroad bankrupt and its lines were sold off to Rail World, Inc. in 2003.

The remaining property was then acquired by a new startup, the Montreal, Maine & Atlantic.  The MM&A would also go under following a horrific accident within the town of Lac-Mégantic, Quebec during the summer of 2013.  Today, the former BAR trackage is operated by Class II, regional Central Maine & Quebec. 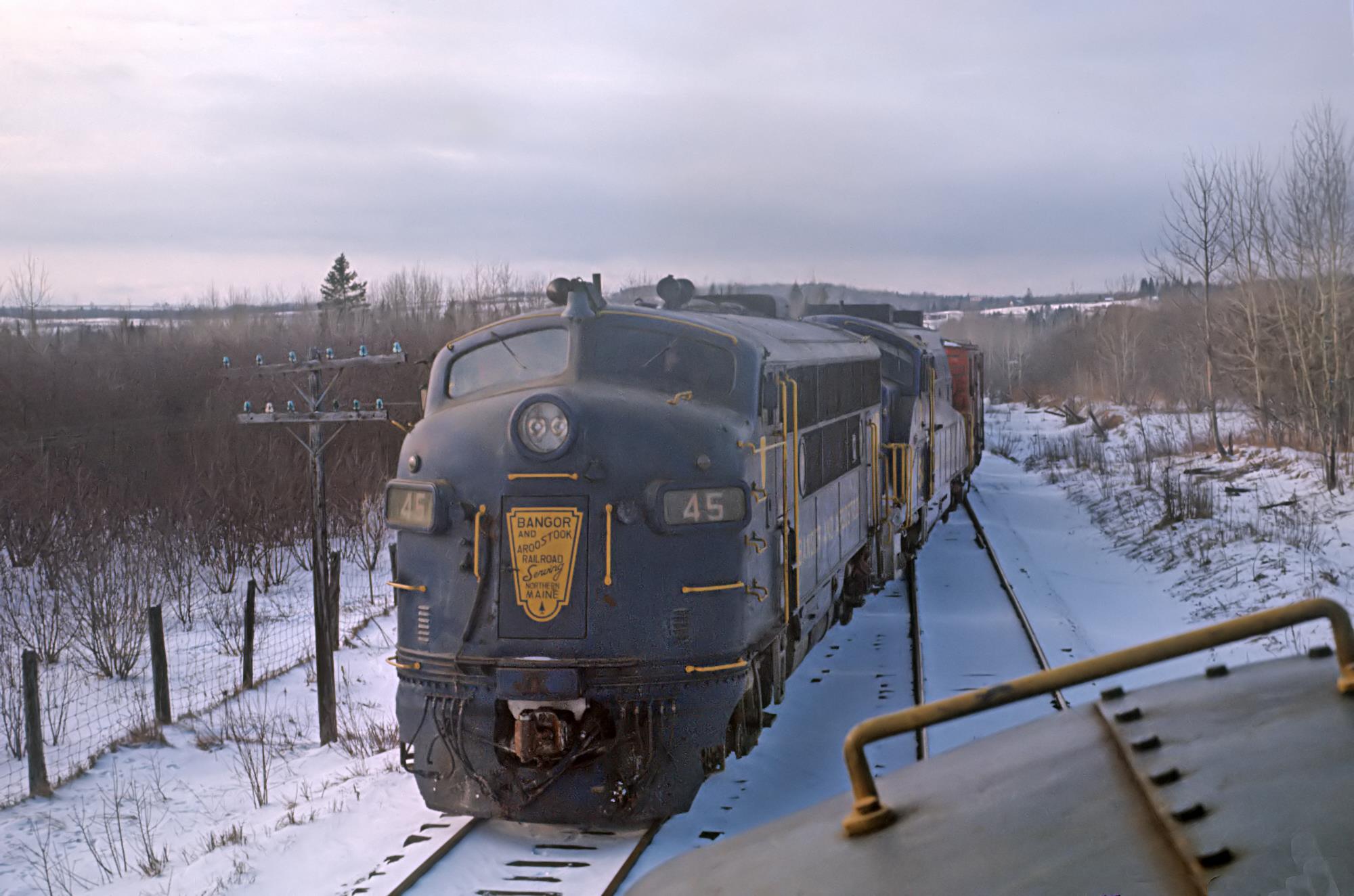 The Bangor & Aroostook was created relatively late for a railroad, incorporated on February 13, 1891.  The idea of Albert A. Burleigh, the system was financed by Aroostook County to open Maine's vast northern wilderness regions, which at the time contained no rail service.

According to the book, "A Brief History Of The Bangor And Aroostook Railroad," written by George Mulherin published in 1900, the county was allowed to subscribe funds not exceeding five percent of its value to construct the new route.

The line was projected to run 200 miles from Brownville, northward to Caribou, near the New Brunswick border, via Houlton, Island Falls, Oakfield, and Smyrna.

The project also called for branches extending out to Fort Fairfield and Ashland while the addition of the Bangor & Piscataquis in 1892 and Bangor & Katahdin Iron Works Railway provided rail service from Old Town to Brownville.

Construction of the BAR worked rapidly northward and reached Houlton in December of 1893.  On January 1, 1894 the first trains began rolling along this section and within a year, on January 1, 1895, service opened to Caribou, Presque Isle, and Fort Fairfield.

Despite the region's sparse population it proved the perfect climate to grow potatoes while the timber business also boomed.

As a result, agriculture and wood-based products provided the BAR with much of its revenue for many years; somewhat surprising considering the railroad did not connect with any major population centers except Bangor.

Of note was Great Northern Paper, one of its largest customers, which supplied the railroad with a healthy business for decades.

The company was also the driving force behind the BAR's only coastal access along Penobscot Bay in the early 1900s, as well as its important connection to the port of Bangor.

To accomplish this it formed the Northern Maine Seaport Railroad in December of 1904 and began construction around the same time as it was pushing towards Caribou.

The NMSRR ran from South Lagrange to Searsport and Cape Jellison, opening for service in November of 1905.  A short, six-mile branch from Hermon provided access to Bangor; the former town was also known as Northern Maine Junction and the location of a large yard and maintenance facility. 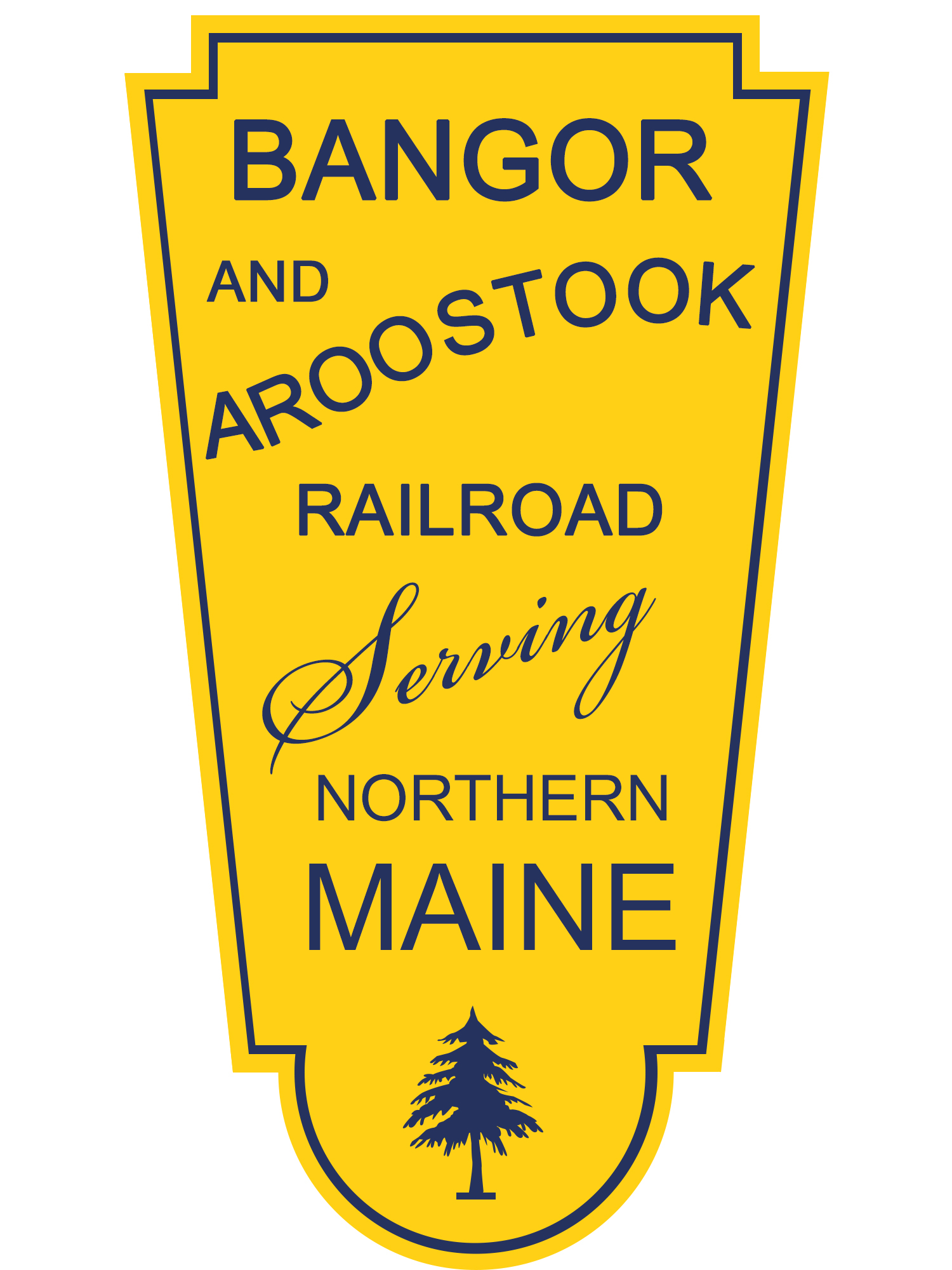 The Bangor & Aroostook's last major expansion occurred in 1915 when it opened a bridge across the St. John River at Van Buren, providing a connection with the National Transcontinental Railroad at St. Leonard, New Brunswick.

This system later became a division of Canadian National and offered the BAR a great deal of interchange traffic.  Mike Schafer notes in this book, "More Classic American Railroads," at its peak size the BAR operated 858 miles, which it maintained through the Great Depression.

After the markets collapsed and traffic sank the BAR had shrunk to a network of only 616 miles by 1950.  Still, considering the severity of the depression the railroad never fell into bankruptcy.

Throughout the years the Bangor & Aroostook's traffic base remained relatively unchanged hauling timber, coal (early on for the paper mills), and potatoes to either the coast or connections with other railroads (notably the Maine Central, Canadian Pacific, and Canadian National). 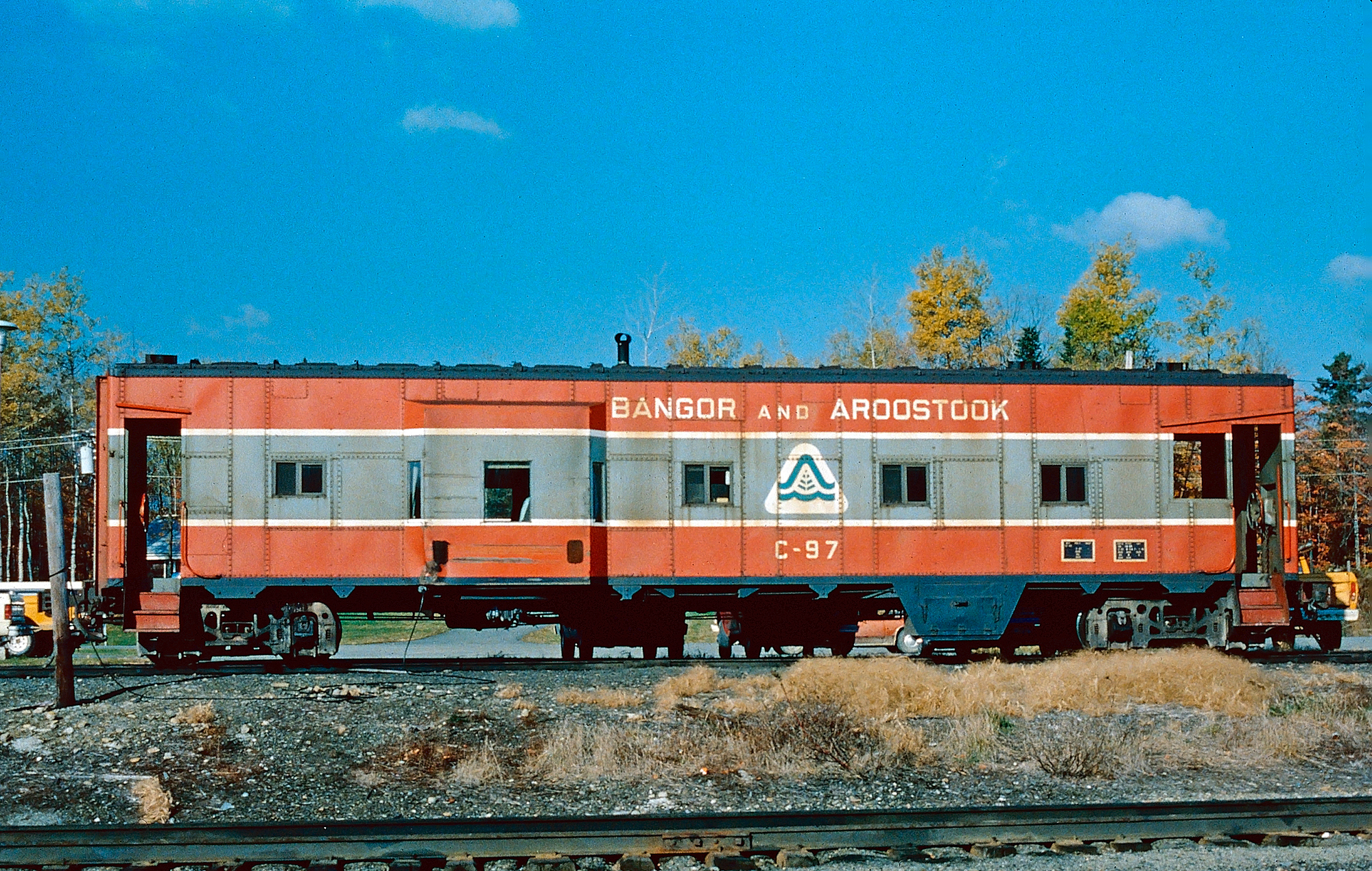 When the country was thrust into World War II after December 7, 1941 the railroad performed superbly in handling the crushing wartime traffic.

Aside from freight, the BAR operated a small fleet of passenger trains between Bangor and northern points (most passenger operations consisted of either mixed trains or local runs), the most famous being the Aroostook Flyer and Potatoland Special.

While it dabbled with streamlining by upgrading the aforementioned trains the railroad did not spend heavily on the concept, or passenger operations in general, since it served such lightly populated territories.

Still, the fact that one could take a well-equipped, completely streamlined train from southern Maine to the state's northern wilderness speaks to just how advanced rail travel once was in this country.

As the passenger business declined after the war the company focused on its core freight business; by the early 1960s it dropped passenger operations entirely with the Potatoland making its last run on September 4, 1961. 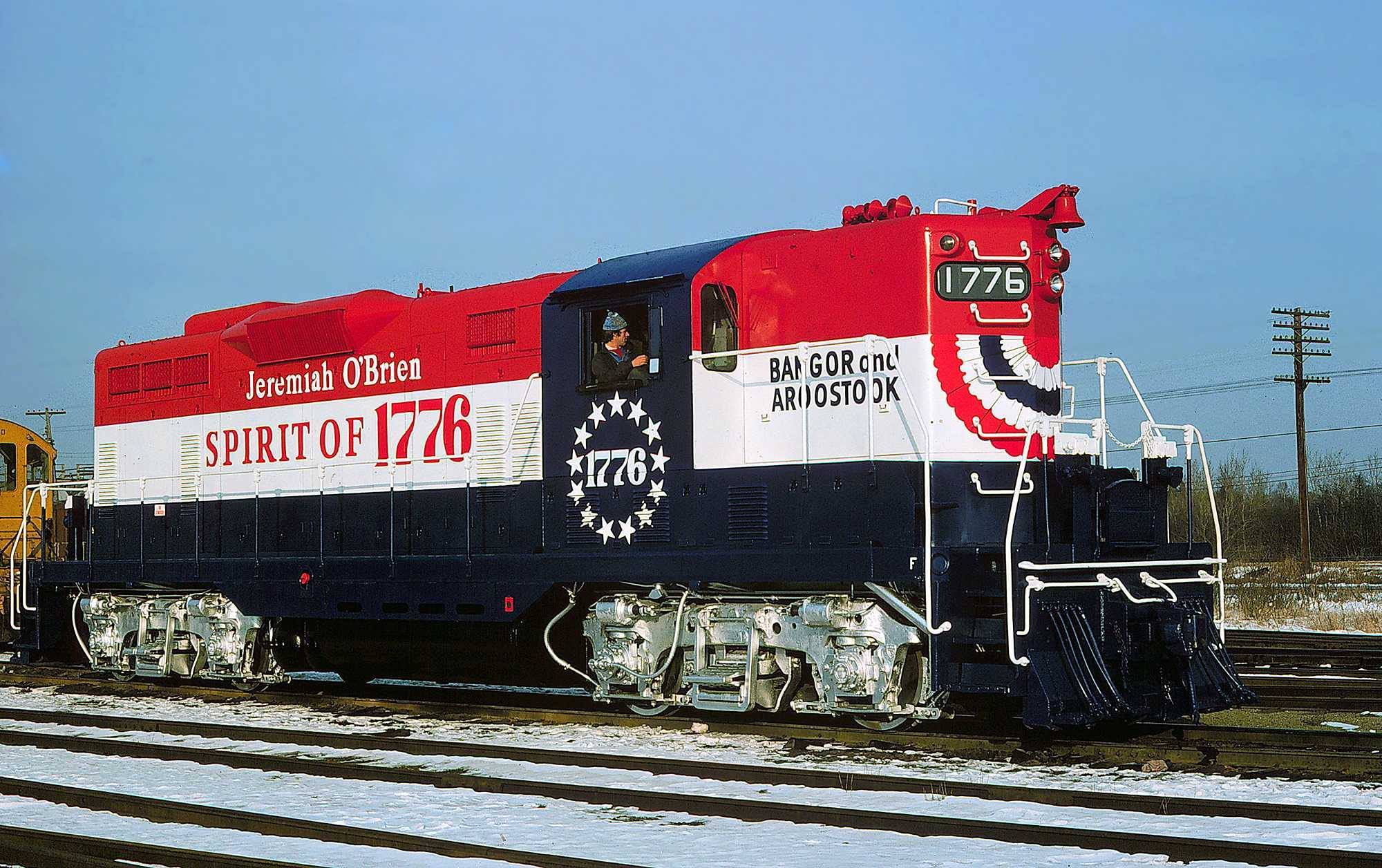 Bangor & Aroostook GP7 #1776 (built as #573) is seen here straight out of the paint shop and dressed up for the Bicentennial. The unit was named the "Jeremiah O'Brien," a Patriot born in Kittery, Maine in 1744 who later became a captain in the Massachusetts State Navy. He was in command of the sloop "Unity" when he captured the British armed schooner HMS "Margaretta" in the Battle of Machias, the first naval engagement of the Revolutionary War.

The little railroad was quick to enjoy the advantages and savings diesels had to offer by acquiring new F3's from Electro-Motive in 1947 and 1948.  It had first tested this cab model a year earlier in July of 1946 and was impressed with its capabilities.

The BAR became a regular EMD customer, purchasing nearly its entire inventory from the builder.  In 1950 the railroad also acquired a semi-celebrity status with a new freight service it initiated.

That year the company decided to build a fleet of 500 insulated refrigerator cars (known as reefers, the railroad needed these to keep its potato shipments at a constant 40 degrees Fahrenheit while in transit) and painted them in a striking and eye-catching Americana scheme of red, white, and blue with STATE OF MAINE PRODUCTS proudly adorning the cars’ flanks.

Their acclaim was the result of rolling all across the country when leased out to railroads and companies for use during months they were not needed.

As the 1960s progressed things slowly dwindled for the BAR.   During this time, highways and interstates along with the ever-expanding trucking industry ate away the railroad's lucrative potato business and other traffic.

The problem was magnified in the Northeast where short-haul freight had long been the established norm while decreasing business meant the same number of railroads fought for declining volume.

For the BAR, potatoes had long been one of its primary sources of freight; alas, its entire business was lost forever when Penn Central's horrid service resulted in an entire season's crop lost at Selkirk Yard in 1969.

What resulted was not only lost profits for the railroad but also many of the farms themselves, which went out of business; for those that remained, most elected to stop shipping by rail ever again.

The fallout from this event nearly drove the railroad into bankruptcy and it was acquired by the Amoskeag Corporation that same year.

This potato loss began a trend which eventually resulted in the BAR’s cessation of service in 2003. While it continued to serve paper mills it struggled to make ends meet.

The railroad lived a relatively quiet existence during the next three decades until it was acquired by Iron Road Railways, Inc. on March 17, 1995.

By this time its network had shrunk to only 433 miles while the new owner's addition of a former Canadian Pacific line to Montreal via Brownville doubled its size to 853 miles. 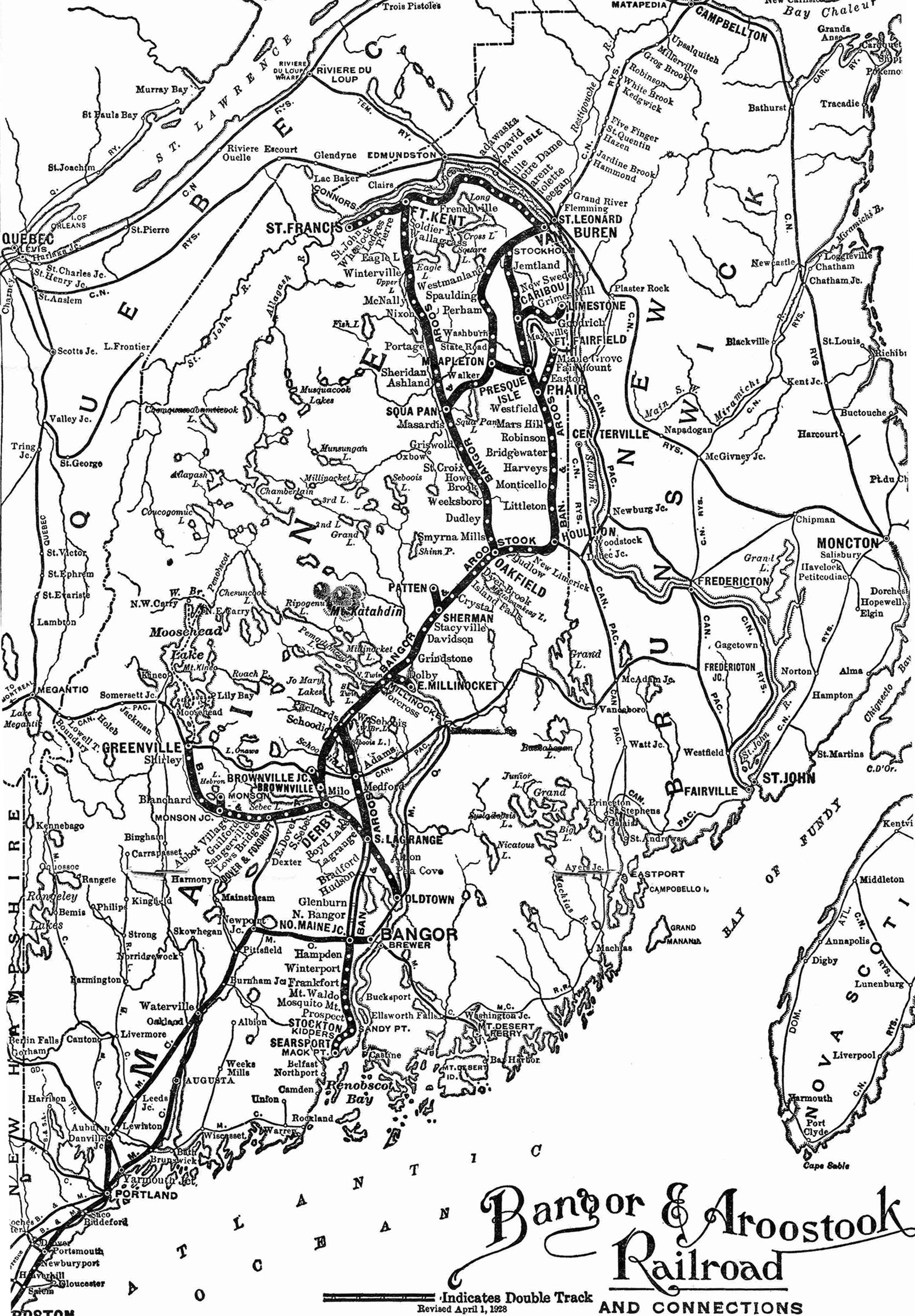 An official, 1928 system map of the Bangor & Aroostook. Author's collection.

As a result of the agriculture loss and other business setbacks the Bangor & Aroostook continued to slump under Iron Road Railways.

When the paper mills it served could no longer support the railroad financially its owner elected to file the BAR for bankruptcy in the early 2000s, selling off its property to Rail World, Inc. in 2003 which renamed the route as the Montreal, Maine & Atlantic Railway. 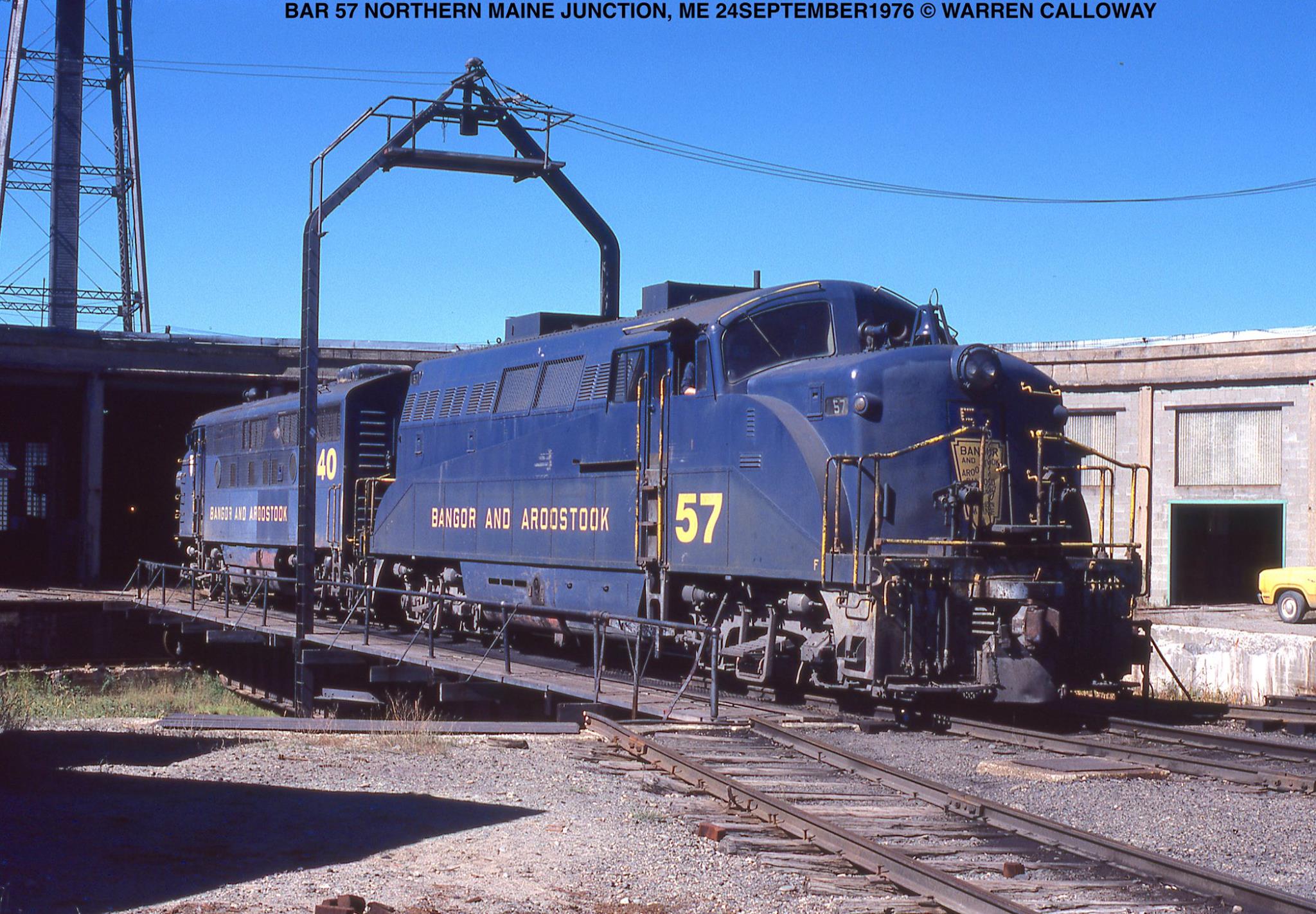 With this sale the BAR ended an interesting history of Maine railroading that had carried on for over 110 years.

Since the MM&A takeover the former BAR system has again been sold to a new operator known as the Central Maine & Quebec Railway, a Fortress Investment Group property.

The MM&A experienced a tragic and deadly derailment during the summer of 2013 that witnessed an oil train explosion in downtown Lac-Mégantic, Quebec killing dozens of people.

The succeeding lawsuits, cleanup, and other related expenses forced the railroad into bankruptcy and its assets were acquired by today's CM&Q which began operations during the spring of 2014.

The latest operator, with greater resources and a driven attitude appears to have a strong future ahead of it.  Today, the former BAR lines survive under the CM&Q from Searsport to Millinocket, as well as the ex-CP trackage to Montreal.

The railroad also released an attractive new livery in late July of 2016 that somewhat mimics the original BAR livery of blue and grey/silver while a moose head seal adorns the locomotive's nose.