Sometimes a forgotten carrier because of its location, the Alaska Railroad (ARR) is a Class II, regional carrier operating nearly 400 route miles.

Its lines are essentially a single mainline stretching from Seward in the south to Fairbanks in the north. Since its beginnings in the early 1900s the railroad has done much to bring prosperity to a region and state that lacks infrastructure.

It has been a vital asset in moving freight and passengers for more than a century and perhaps one day can finally be linked to the North American rail network.

If so, the railroad would transform into a major artery that would likely see all the largest cities along its route soar to new economic heights.   Today the Alaska Railroad is owned by the State of Alaska after operations were handed over from the federal government. 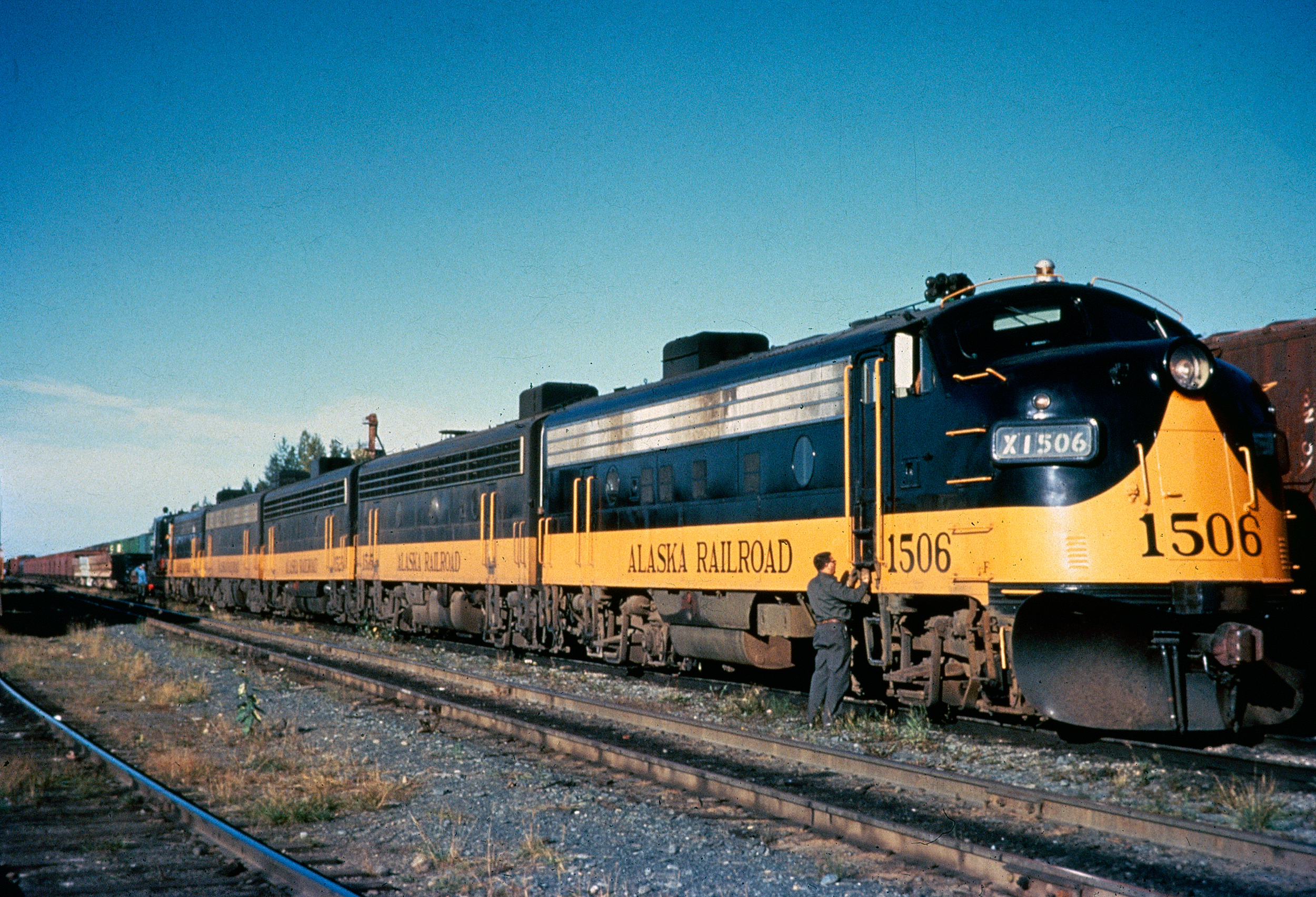 It is one of the few private railroads to continue hosting passenger trains regularly with equipment adorned in a beautiful dark blue and yellow livery with "ALASKA" proudly flanking locomotives and cars.

Tourism has blossomed into a significant aspect of the railroad's operations. With so many folks now flocking to see Alaska's incredible natural beauty by either cruise, plane, or even vehicle along Highway 1 many also book trips by train to further this experience.

As such, the railroad has several different vacation packages available.  Presented here is a brief history of the Alaska Railroad as well as current operations, including the tours it offers.

The State of Alaska's rail heritage dates back to 1898 when the White Pass & Yukon Route Railroad opened its 111-mile line between Skagway and Whitehorse, Yukon Territory (Canada).

However, this narrow-gauge operation was largely local in nature to serve the booming Klondike Gold Rush of 1897.  It later transitioned into handling copper, silver, and lead ore which continued until October 7, 1982 when freight operations ceased.

The railroad would likely have been abandoned if not for the tourism industry and has flourished in that role ever since. 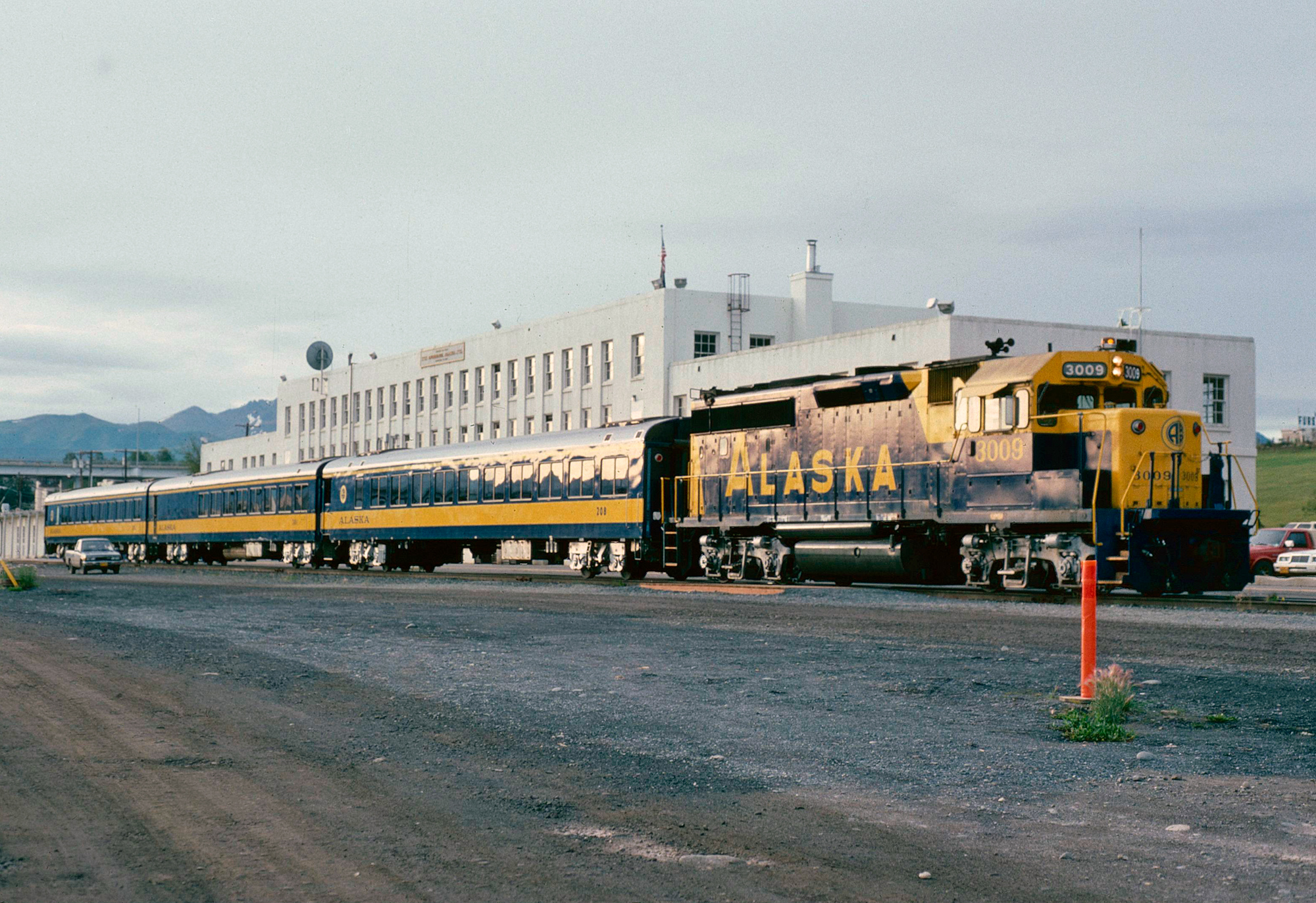 The then-Alaska Territory's introduction to standard-gauge railroads began with the Alaska Central Railroad (AC), which opened 51 miles north from Seward in 1909.

While the AC's only important connection was at Steward, service to the port city was nonetheless a vital transportation artery for a region that was so rugged even viable horse trails and roads were scarce.

Unfortunately,  with limited online business the railroad went bankrupt and was reorganized as the Alaska Northern Railway in 1909.

The Alaska Northern extended the system to Kern Creek along Turnagain Arm, 71 miles from Seward, by 1910.  In his book, "High Iron To Fairbanks: A Novel," author Evan McKinney details the Alaska Railroad's genesis.

Following the Alaska's formal organization as a United States territory on August 24, 1912 the federal government put into motion efforts to open up the region to trade and exploration.

Spearheaded by President Woodrow Wilson the Department Of The Interior formed the Alaska Engineering Commission to begin surveying routes.

Led by Tom Riggs, Lieutenant Frederick Mears (who worked as engineer for the Great Northern Railway and helped build the Panama Railroad), and William Edes, two routes were ultimately chosen: 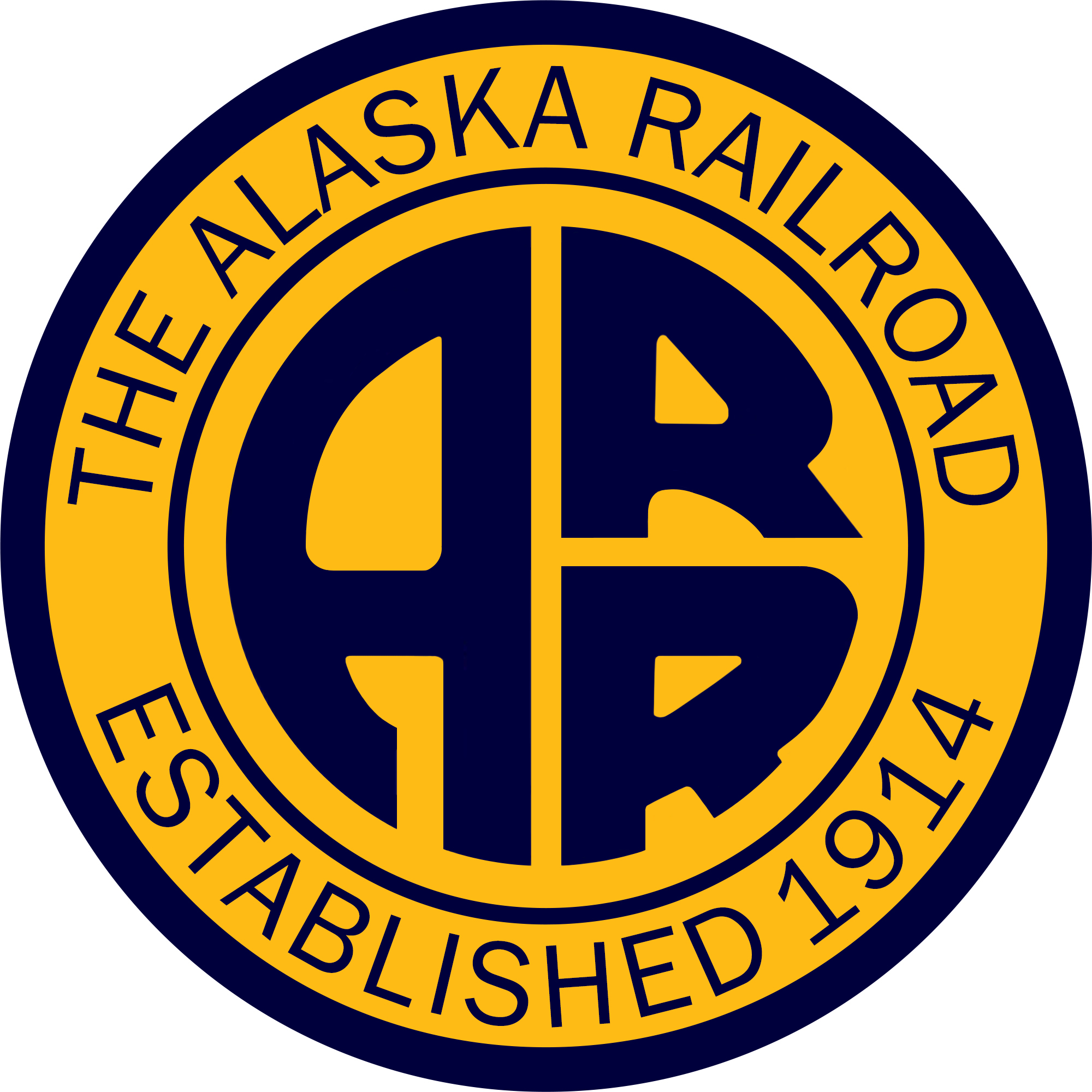 The project carried three stipulations; it could not extend further than 1,000 miles, connect at least one Pacific harbor with northern coal fields, and exceed $35 million.

To accomplish the latter and reduce construction costs the Alaska Northern was purchased.

The railroad was projected to extend a total of 473 miles with a branch extending northeasterly from the Knik Arm and running along the Matanuska River to serve coal lines in the river valley (this 38-mile branch, completed in 1917, has largely since been abandoned north of Palmer). 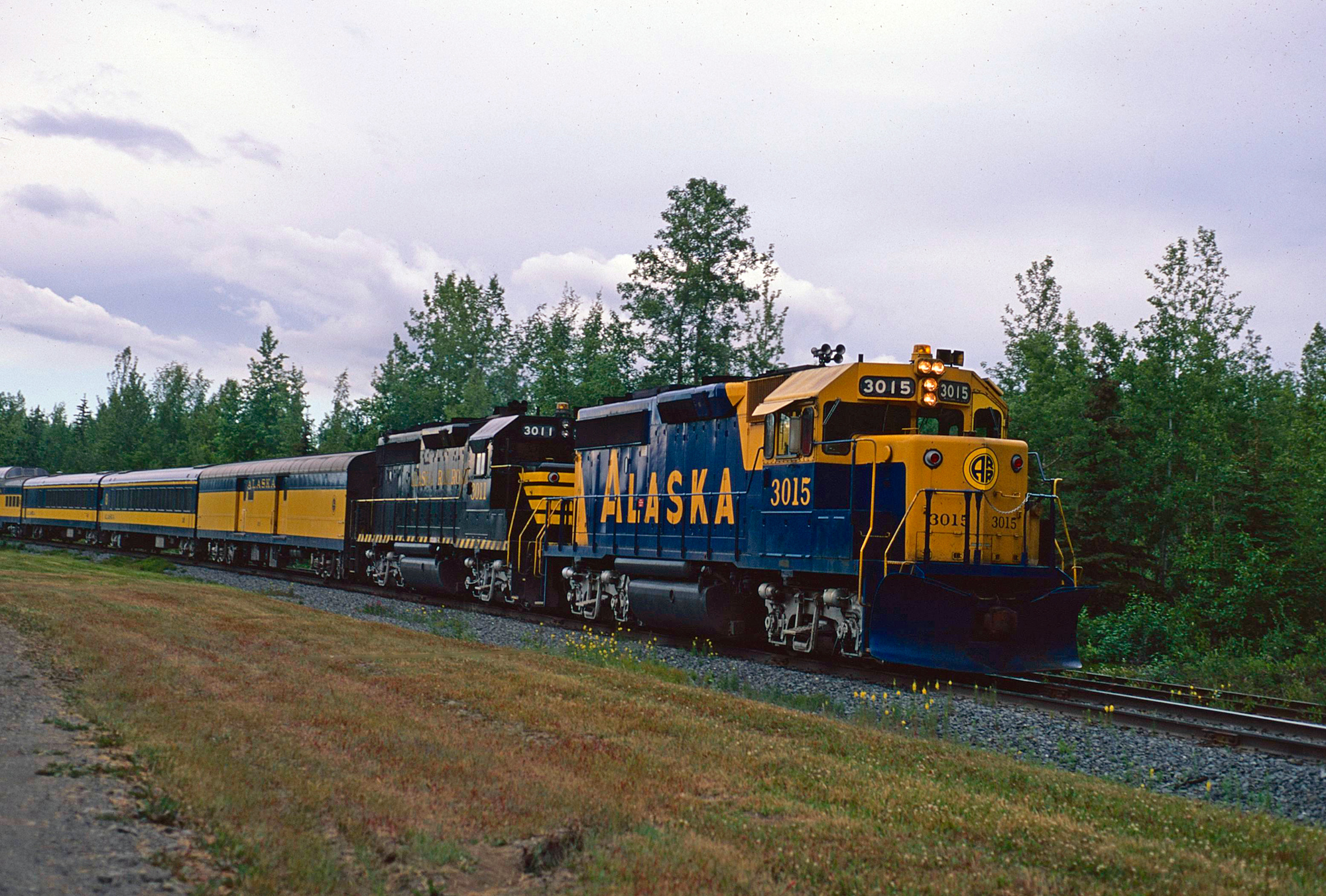 A pair of Alaska Railroad GP40-2's lead one its passengers trains on July 16, 1994. Author's collection.

It was at Ship Creek where Mears established the railroad's primary deep-water construction port where materials, supplies, and men were off-loaded from marine ships.

It quickly grew into a tent city and eventually led a townsite plotted which officially became Anchorage, on November 23, 1920.  Today, it is Alaska's largest city.  Major construction of the railroad began in 1916, bogged down in part by the ongoing Great War in Europe (World War I).

The company also enjoys a bustling tourism business during the summer season.  If you have the means for such a vacation, an excursion on this railroad should be a bucket list item!

While the summer season is always their busiest you can catch a train ride year round although the schedule is truncated largely to weekends only and on select dates throughout the winter.

Finally, be sure to book a special event train for the holidays and other noteworthy seasons.

Another significant setback occurred on January 22, 1916 when a severe fire destroyed the railroad's wharf in Seward.

Even by the standards of day, which in railroading were quite modern during the 1910's, building a railroad in such a rugged, undeveloped wilderness was truly like stepping back a half-century to the Transcontinental Railroad's construction of the 1860's.

"The Last Frontier" was unforgiving due to the weather, terrain, and lack of established facilities.  There were no cities of significance in Alaska at the time and all materials had to shipped from Seattle. 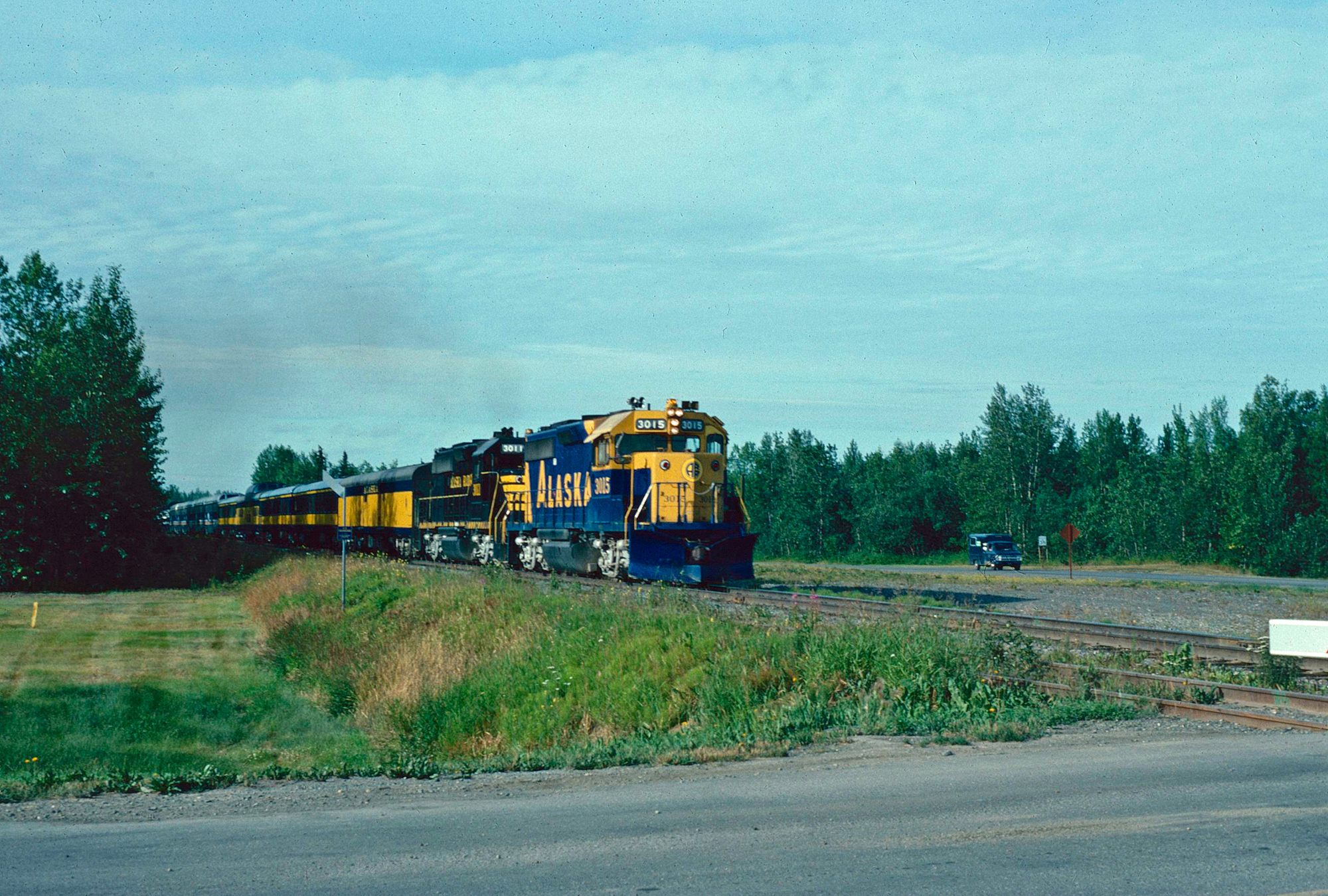 The same train as photographed above. Author's collection.

The railroad was constructed from both ends; the northern segment was largely completed to Fairbanks by 1917 following the purchase of the narrow-gauge, 45-mile Tanana Valley Railroad (TVRR).

This system was built primarily to serve the gold rush.  Its interest by the Alaska Railroad was for terminal facilities along the Tanana River near Fairbanks.

Operated as the Chatanika Branch much of the TVRR was abandoned in 1930.  The route to Fairbanks was not officially completed until the 700-foot, Mears Memorial Bridge across the Tanana River at Nenana on July 15, 1923. 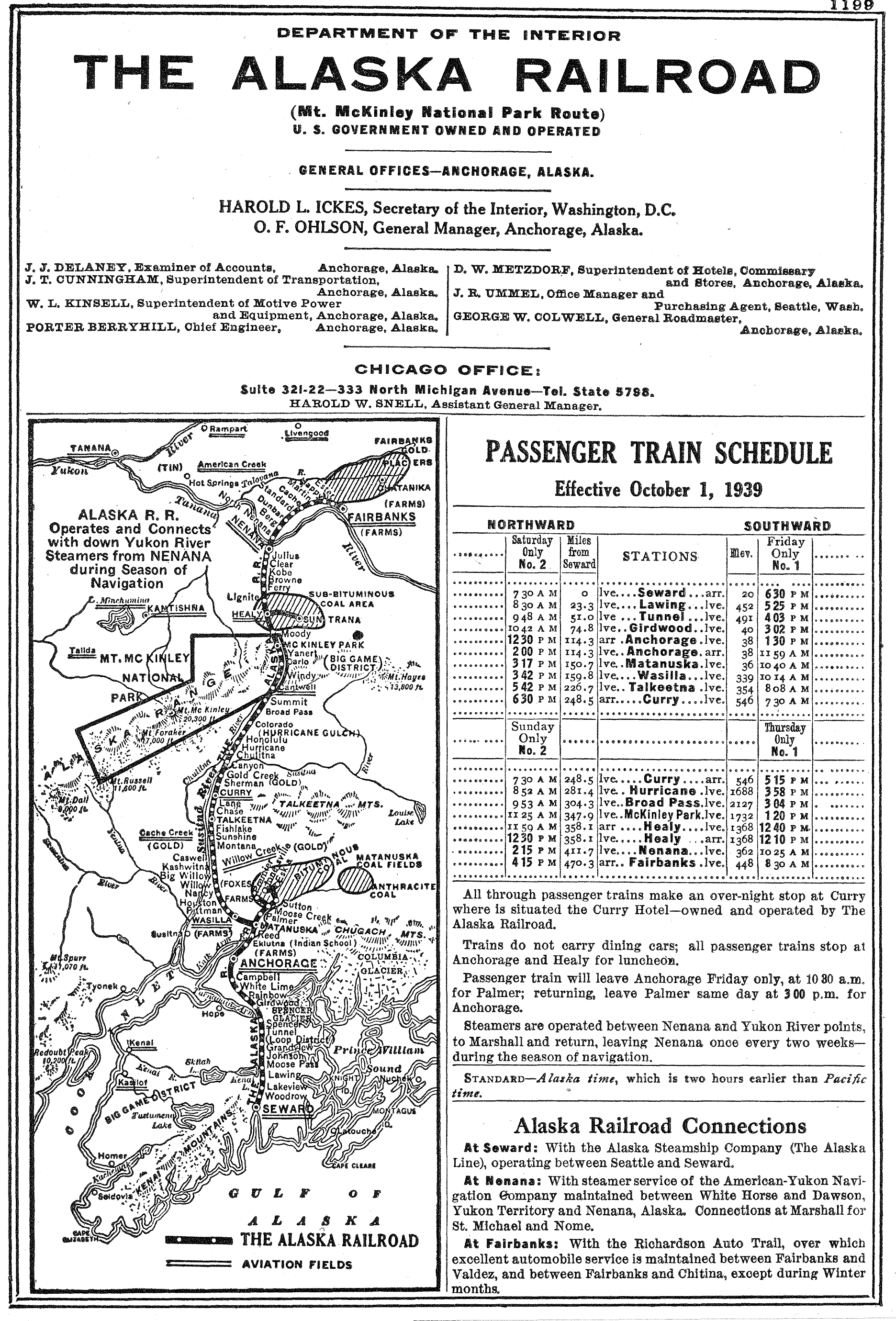 The southern segment (Anchorage-Turnagain Arm) was finished shortly after the Tanana Valley Railroad acquisition when the final rail was laid on September 17, 1918.

From that point, forward, the task of linking Anchorage and Fairbanks began. After the purchase of the Tanana Valley Railroad it took construction crews six years to link the two cities completing the line, officially, on July 15, 1923.

In the end, as is nearly always the case, final construction costs far exceed expectations.  When accounts tabulated the numbers the Alaska Railroad had cost more than $56 million and fiscal year's end in 1923 (June 30th) noted profits covered less than half of operating costs.

This did not even factor in maintenance and general expenses, which showed even greater losses for the project.  Despite this, the new railroad, and those who oversaw its construction, were able to see it finished and provide the territory/state a much needed infrastructure improvement. 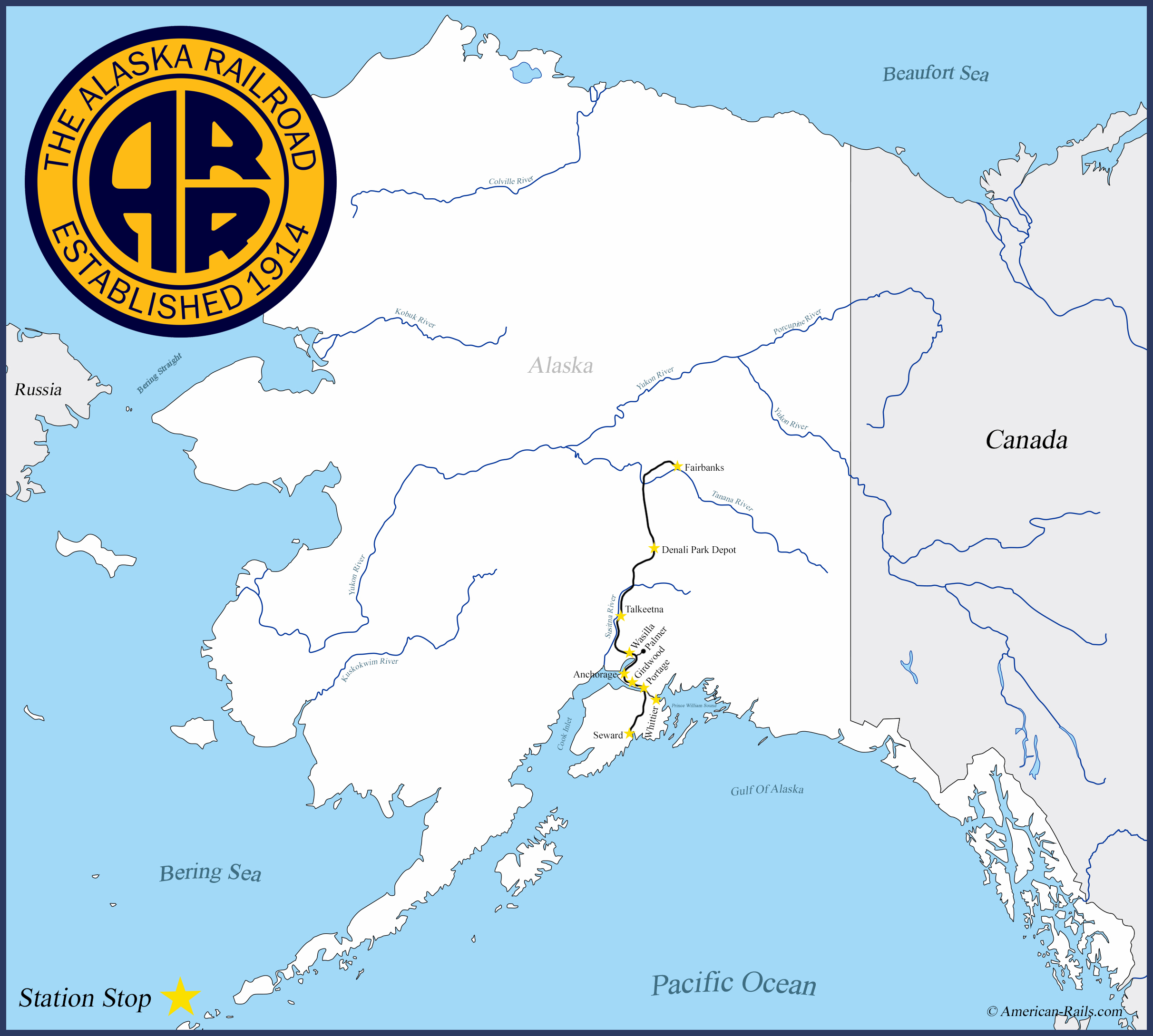 A present-day map of the Alaska Railroad, including current station stops. Author's work.

By 1944 with the establishment of a second port at Whittier, the Alaska Railroad was all but complete and has changed little over the last 70+ years.

The ARR became state owned in the 1980s when President Ronald Reagan, in 1983, signed legislation transferring ownership of the railroad to the State of Alaska.

The transfer was official on January 5th, 1985 when on that day the ARR came under ownership by the state. 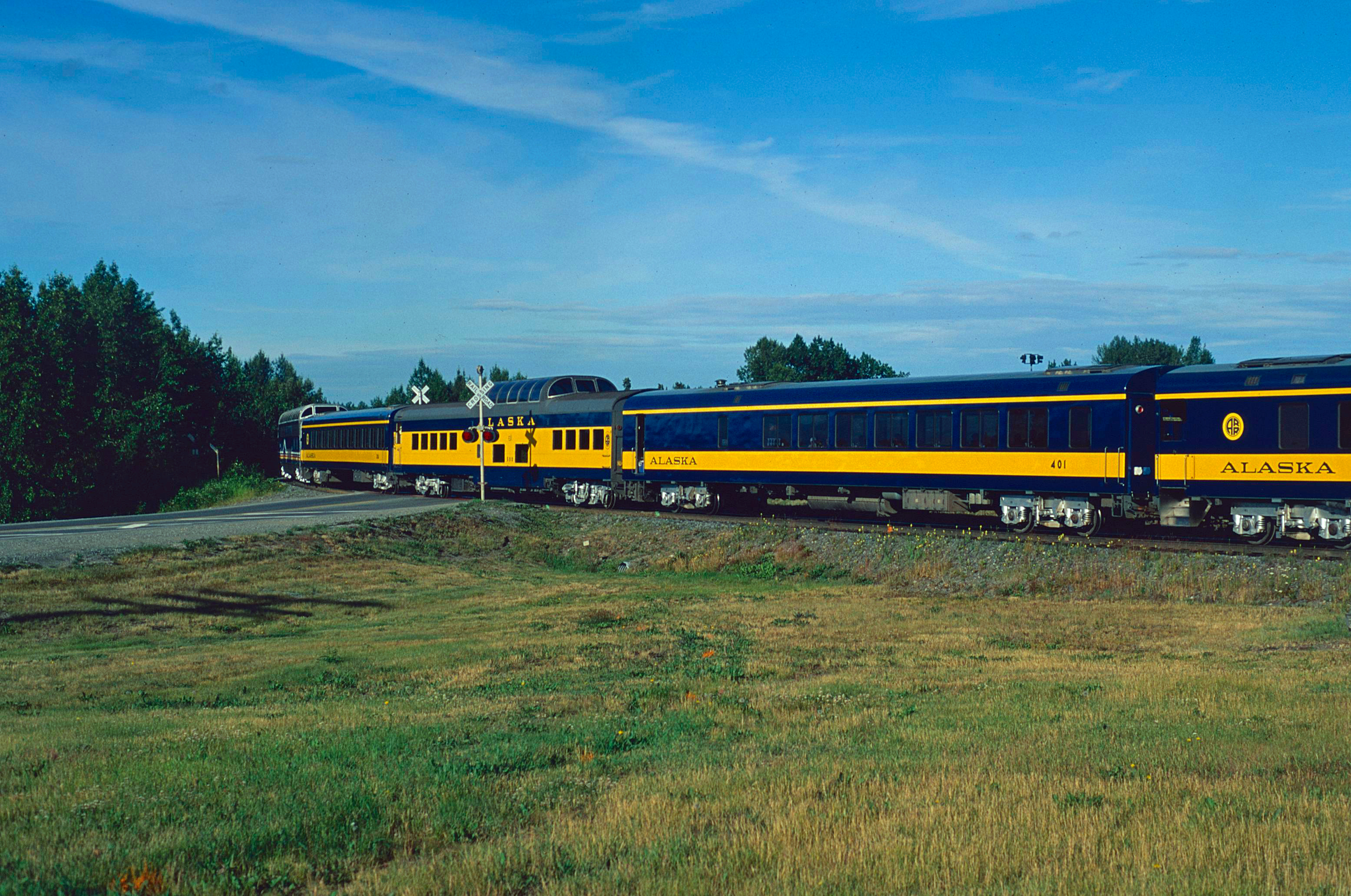 The state spent $22.3 million to purchase the railroad although the final price tag was nearly $100 million as Alaska had to spend an additional $70 million bringing the right-of-way up to proper standards due to many years of deferred maintenance.

In all, the Alaska's system runs roughly due north winding its way from Seward in the south to Eielson in the north, where the Alaska serves the Eielson Air Force Base.

And, currently the Alaska Railroad’s roster consists entirely of EMD power from two F40PHs to more than two-dozen almost-new SD70MACs.  Throughout the years the Alaska had a wide range of steam and diesel locomotives.  Its current roster is listed below 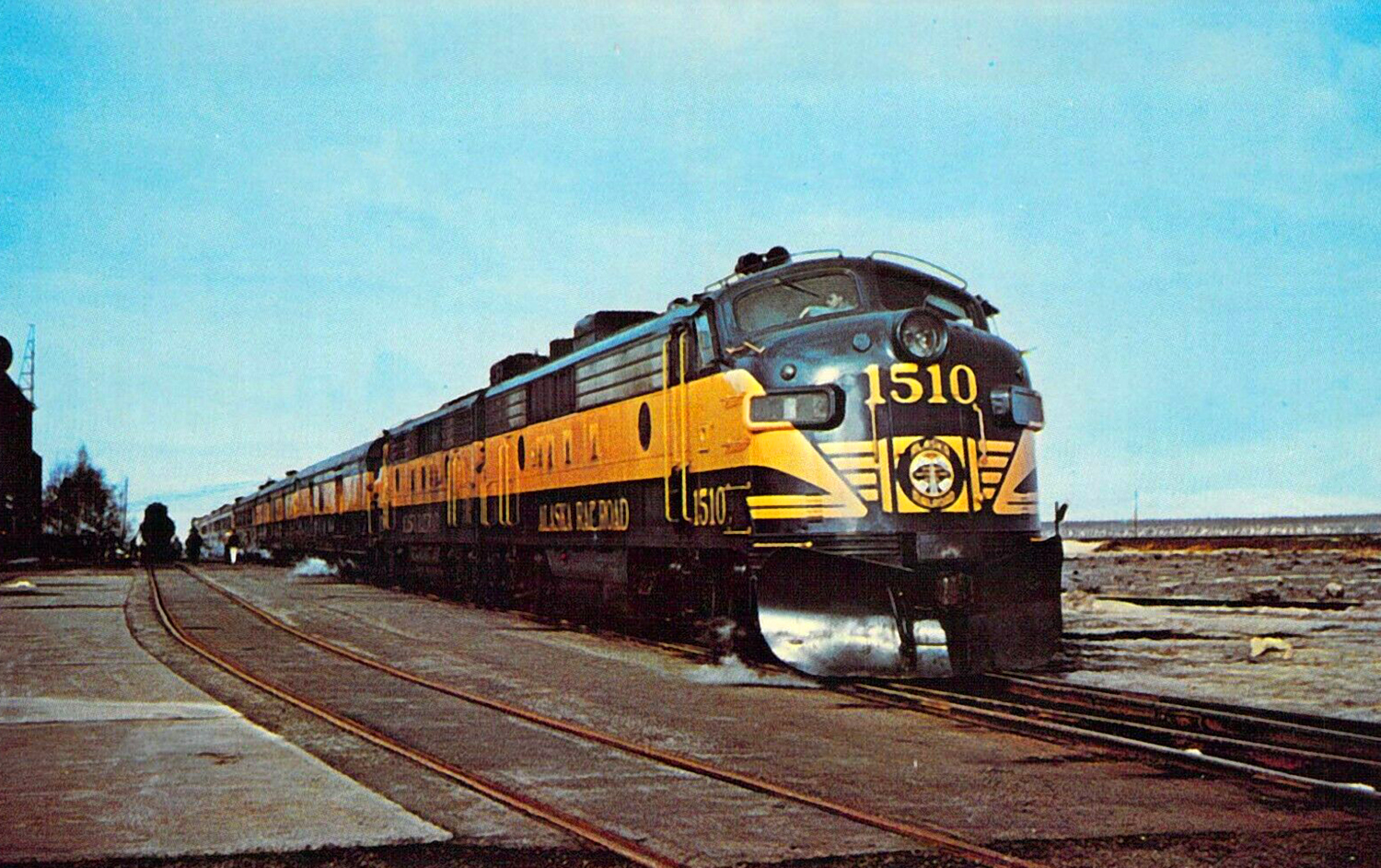 A pair of Alaska Railroad FP7's have the "Aurora" (Anchorage - Fairbanks) awaiting departure from the station in Anchorage, Alaska on April 11, 1964. This was the first train to run north from the city after the severe earthquake of March 27th that year (Good Friday).

For years there have been discussions of linking the Alaska Railroad with the North American rail network.  To date the Canadian and American governments have never ponied up the needed billions to realize this connection.

However, there finally appears to be a proverbial light at the end of the tunnel thanks to President Donald Trump.  News broke in September, 2020 that he had issued a Presidential Border Crossing Permit (presidential permit) to build the Alaska-Alberta Railway (A2A).

The $17 billion project is expected to begin construction in 2020 and be fully operational by 2026.  The new railroad, running from Fort McMurray, Alberta to Delta Junction, Alaska will cover an impressive 1,600 miles.

This new railroad will likely greatly expand the economies of Alaska and the Canadian territories through which it passes by allowing a free flow of freight from the Gulf of Mexico to the Gulf of Alaska.

It is expected to generate $60 billion in additional cumulative GDP through 2040 and create more than 28,000 jobs.  Perhaps most importantly, the Alaska Railroad will finally be linked to the rest of North America.