During the height of the Southern's passenger services the railroad fielded dozens of trains departing Washington, D.C. to reach cities throughout the south such as Charlotte, Charleston, Raleigh, Atlanta, Memphis, New Orleans, and Birmingham.

The Asheville Special, as the name suggests, left the nation's capital for the western North Carolina resort city of Asheville located near the gorgeous Great Smoky Mountains.

The train was inaugurated during the 1920s and offered passengers connecting service to points north of D.C. thanks to the Southern's friendly allegiance with the Pennsylvania.

It was an early victim of cutbacks during the late 1940s but incredibly survived into the post-Amtrak era, remaining on Southern's timetable until the mid-1970s via a truncated schedule.

The first time Asheville Special is known to have appeared on Southern's timetable is June of 1922 when an earlier train was renamed.  The new routing was listed as trains #15 (southbound) and #16 (northbound) carrying standard heavyweight equipment.

It was later upgraded with full Pullman service, sleepers, a sleeper observation, diner, and reclining seat coaches.  Standard power for the train during the steam era was one of the Southern's Class Ts 4-8-2 Mountains. 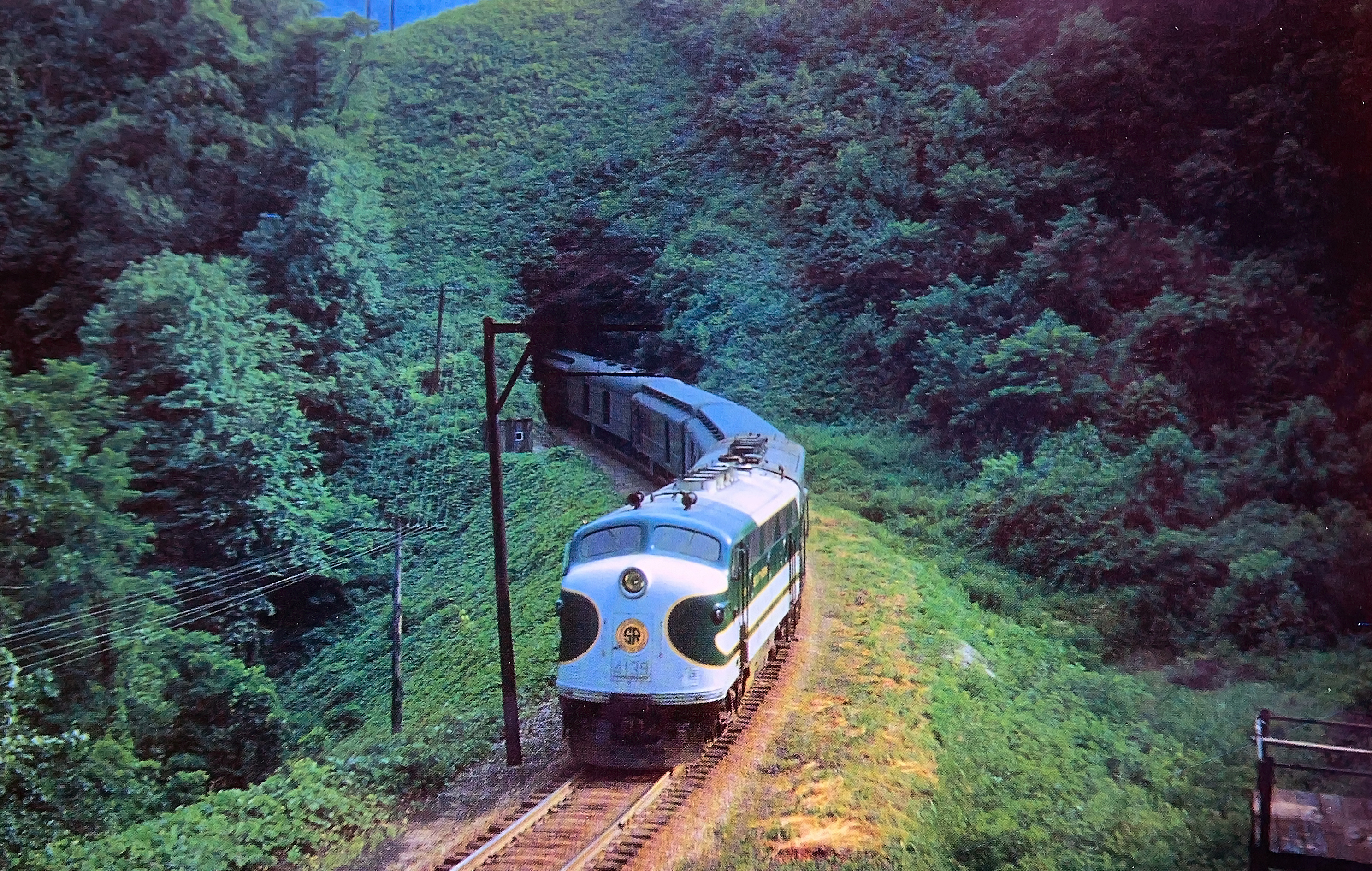 These locomotives were Alco and Baldwin products manufactured between 1917 and 1919 and could handle the larger cars then being produced while still maintaining sufficient running times (the smaller Pacifics were having difficulty doing so, leading to their replacement on Southern's stiffer grades).

According to Tom Murray's book, "Southern Railway," one reason the railroad saw high patronage on its trains was thanks to the numerous connections offered to cities beyond its own network such as New York (via the Pennsylvania), South Florida (via the Florida East Coast), and Texas (via the Frisco).

It also maintained a shortcut routing over the Norfolk & Western between Lynchburg and Bristol allowing for a faster connection to Chattanooga and other southern points.  Such a vast reach across the East and Deep South made the Southern the top choice for many business travelers and vacationers.

Its popularity also stemmed from the numerous trains carrying first-class accommodations (i.e., sleepers and diners).  At one point this number totaled nearly two-dozen from famous names like the Crescent and Tennessean to lesser knowns like the Florida Sunbeam and Peach Queen.

Its public image of elegance can be traced back to 1926 when the railroad began adorning some of its steam locomotives, the first of which were the fabled Class Ps4 Pacifics, in a royal livery of Virginia Green with gold trim and white-wall wheels.

At the time, nearly a decade prior to the colorful streamliner hitting the rails, this was a radical change from the mundane black and/or dull Pullman Green, the former of which had been used on equipment practically since trains first began plying the rails.

As a separate consist the Asheville Special operated only between Asheville and Salisbury; north of Salisbury its cars were combined with the Augusta Special and carried on to Washington, D.C. where passengers could then continue north on the Pennsylvania if they so chose. 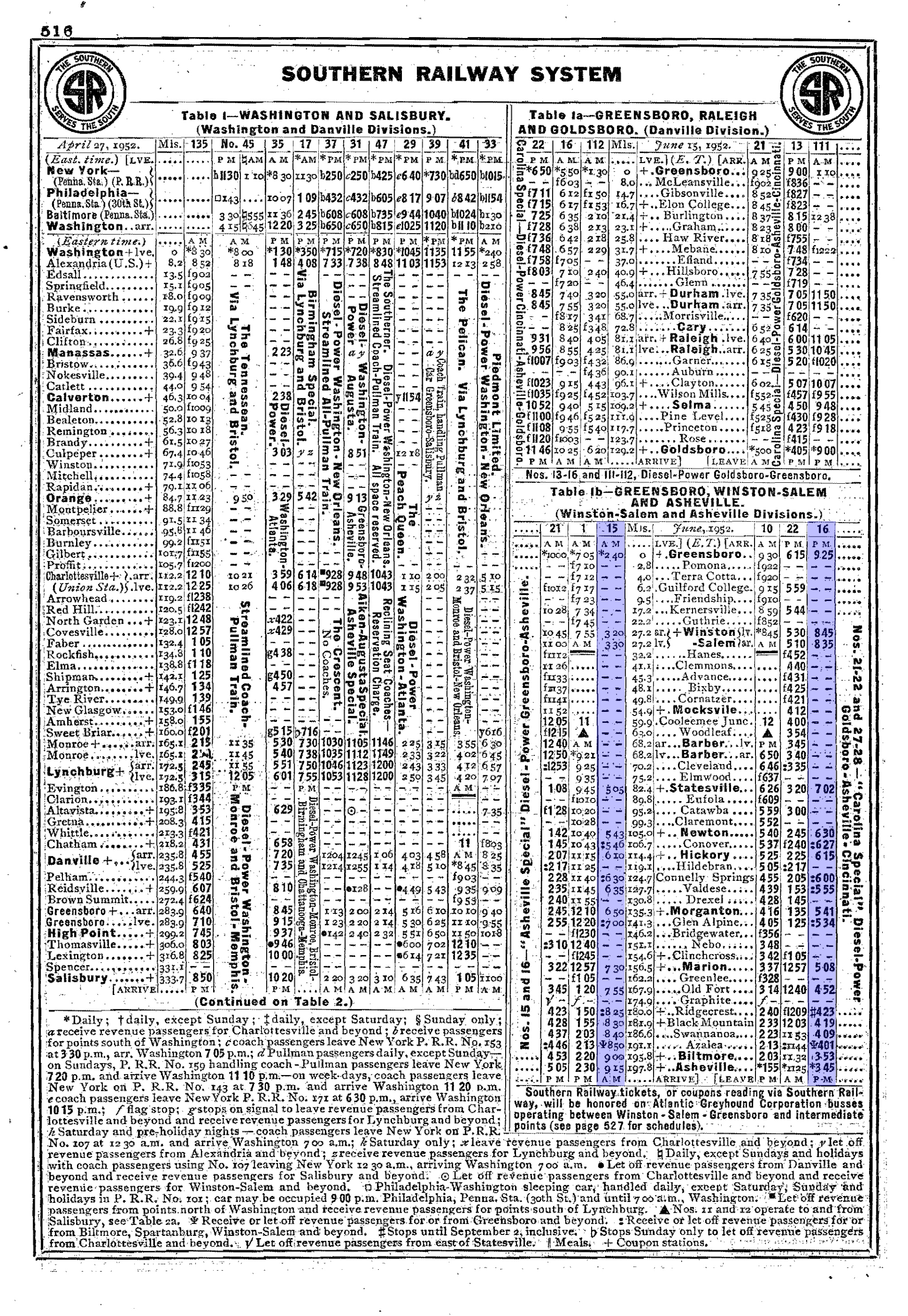 The city of Asheville became a popular destination on the Southern thanks to its location within the heart of the Blue Ridge Mountains and not far from the Great Smoky Mountains.

The railroad marketed the resort city as "The Land Of The Sky" and for many years trains like the Asheville Special were quite popular.  The routing west of Salisbury/Greensboro provided stunning views of the western North Carolina mountains where trains passed through the "Old Fort Loops" west of Marion.

This engineering feature was not exactly a true loop but the line zigzagged back and forth several times in an attempt to gain elevation.  It was just another reason why the Special was saw high patronage for many years. 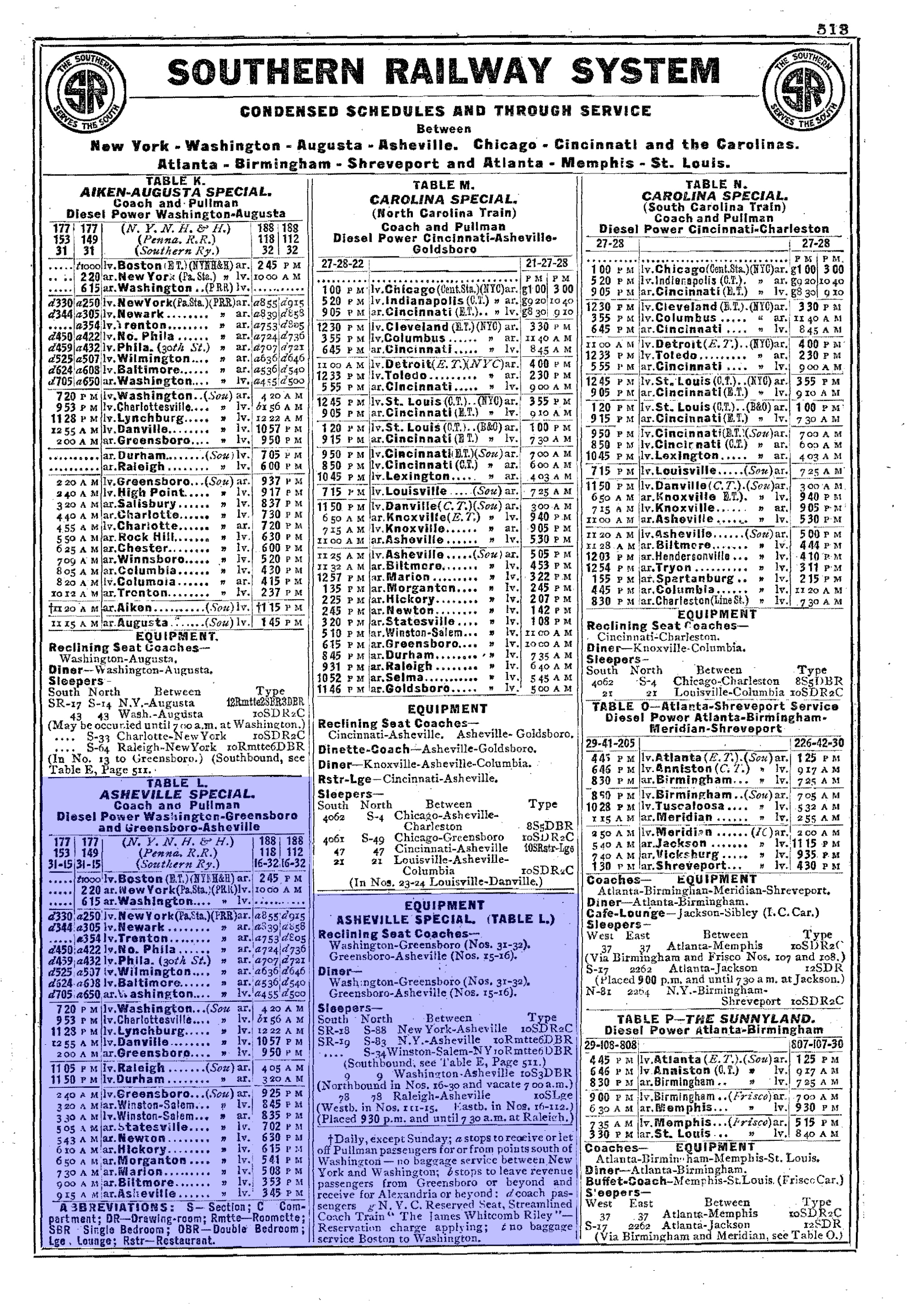 The years after World War II were times of great change for the Special. Diesel power, first Electro-Motive E6s and then later E7s and E8s, replaced the handsome Mountains and several routing changes occurred:

Entering the 1960s more downgrades and cutbacks continued as travelers slowly vanished in favor of automobiles and airlines.  In 1966 the #15 southbound run was combined with the Southerner and the #16 northbound consist was grouped with the Crescent.

Two years later in 1968 the downtown Asheville depot was demolished and that December trains began terminating at the Biltmore Station located about two miles to the east.  The train's New York sleeper incredibly survived until February 15, 1970 when it was finally discontinued.

A few months later service to Asheville was cut to thrice-weekly as a coach-only run.  Interestingly, the Special added a dome-coach around this time and even more amazing survived the start of Amtrak in 1971.

"I looked over the situation, and it was clear to me that we didn't have to sign up for Amtrak.  We could afford to keep our primary train and make it the finest in the country.  If we turned the Crescent over to Amtrak, I knew what would happen.  It would go to hell, very fast."

It continued to operate this way with an FP7, standard combine, and dome-coach until its final run on August 8, 1975 when the Southern permanently discontinued the train.  To this day, Asheville, a city of nearly 100,000, has not regained passenger rail service.