The Chicago & North Western provided a vast array of passenger services across its far flung network throughout the Midwest.  Along with a long list of named trains it also operated countless unnamed runs, many of which provided a high level of service despite their number-only status.

The Ashland Limited was one of the C&NW's secondary trains, one of many that provided service to the Upper Midwest reaching Ashland, Wisconsin via Green Bay.

The train, initiated in the late 19th century, was never streamlined although in later years did sport sleek Electro-Motive E units on the head end.  In an effort to reduce growing red ink the C&NW ended the Limited during the 1960s as it scaled back passenger operations, a time in which the railroad itself was financially strained.

The Ashland Limited (also sometimes referred to as the Fisherman's Special or The Northwoods Fisherman) entered service on Sunday, December 2, 1894 listed as train #211 (northbound) and #212 (southbound).

Linking Chicago with rural Ashland along Lake Superior it provided sleepers, reclining seat coaches, a diner, and lounges.  In all, the train was normally about ten cars in length.  During the 20th century its power normally included one of the 'North Western's E Class 4-6-2s.

During the height of rail service the C&NW's service between Chicago and Duluth/Superior was widespread and it dispatched several trains throughout the region.  One particular advertisement from the early 20th century demonstrated this in great detail describing how travelers could "Enjoy the cool breezes from Lake Michigan En route."

At this time there were several different trains running between Ashland and Chicago reaching eastern Wisconsin and Michigan's Upper Peninsula. Some of these services included:


According to the C&NW, "The picturesque route by day - traveling over a heavily rock ballasted roadbed protected by automatic safety signals insures a restful night.  Your train leaves Chicago from the palatial Passenger Terminal."

(The below consists are from Chicago & North Western's timetable dated effective January 15, 1939.) 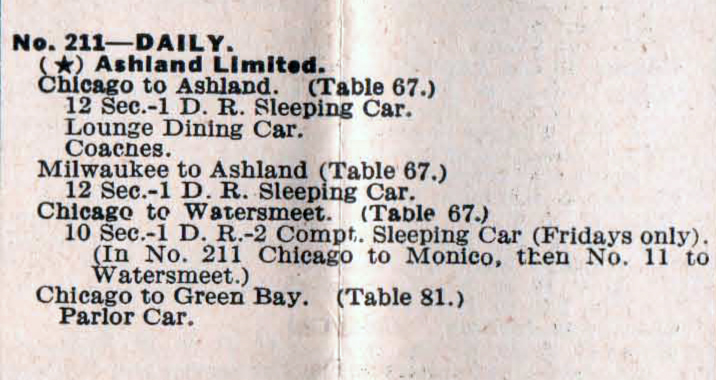 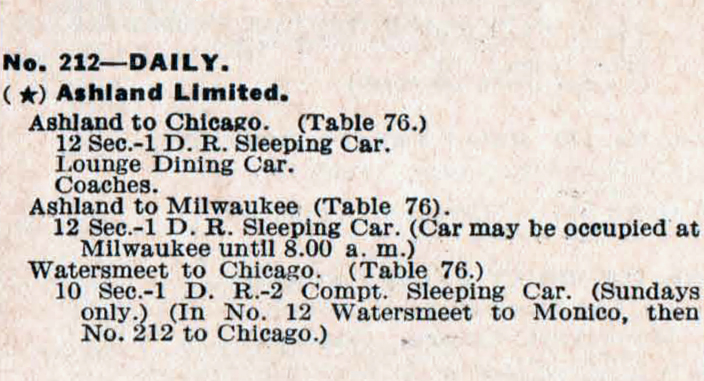 The Chicago & North Western was an early proponent of streamlining although interestingly not of its own doing at first.  In 1935 the railroad was plunged into bankruptcy, a result of the ongoing depression, and was in no financial position to reequip its trains with sleek, new, and colorful equipment.

Instead, Union Pacific, which C&NW had partnered with for many years to ferry UP trains between Omaha and Chicago, requested the Midwestern road purchase a handful of diesel-powered, articulated trainsets to launch the new City of Portland, City of San Francisco, City of Los Angeles, and City of Denver.

Ultimately, the fleet proved so successful that within a few years UP and C&NW were ordering non-articulated lightweight cars and locomotives to power the trains.

The C&NW's own streamlining endeavor was a somewhat slow process, largely due to its financial situation mentioned above.

Prior to launching any such trains, during July of 1934 the railroad began speeding up schedules on its Chicago - Milwaukee and Chicago - Twin Cities corridors using traditional steam locomotives and heavyweight equipment.  This was achieved through rebuilding its Class E-2 Pacifics and upgrading sections of rights-of-way.

These improvements allowed the 'North Western to boast travel times of just 420 minutes along the 408-mile route between Chicago, Milwaukee, and the Twin Cities.  As a result the railroad launched the 400 on January 2, 1935, a famously named train that would spawn an entire fleet with similar names.

(The below Ashland Limited timetable is dated effective January 15, 1939.)

The railroad finally jumped into the streamlining fray during 1939 when its bankruptcy court granted the release of funds to purchase new lightweight equipment from Pullman-Standard and E3 diesels from Electro-Motive.

These were also equipped with lightweight cars and additional new diesels from Electro-Motive while the 'North Western also streamlined a handful of 4-6-2s and 4-6-4s to further enhance the allure of speed (the latter powered C&NW/UP trains between Chicago-Omaha).

With the introduction of these trains the Ashland Limited lost any remaining status of prestige it continued to carry.

In 1950 the Shoreland 400 replaced the train through Sheboygan, Wisconsin and the Limited was combined with the Iron & Copper Country Express to Green Bay.  In 1953 as new diesels continued to arrive on the property steam power ended on the Limited, replaced by Electro-Motive E series locomotives.

Interestingly, the C&NW was still launching new 400s by the early 1950s but by the end of the decade it already started the process of cutting back services following the continuing decline of patronage during those years (in 1955 it had ended the partnership with Union Pacific ferrying its train through to Chicago).

The Ashland Limited left the timetable during the 1960s and by the end of the decade the railroad had quietly ended the famous 400s altogether (referring to its train after that time only as streamliners).