Arizona railroads are known for flat deserts, high mountains, and trains that range from speeding loads of intermodal to slow drags of coal, copper, agriculture, and wood products.

The state's history with trains began in the latter half of the 19th century although because of its lack of natural resources and major markets few classic lines ever operated there.

Today, while the state may be home to less than 2,000 route miles of railroad but it offers a little of everything from main line railroads (the West's two largest systems still operate important routes through Arizona) to railroad museums and tourist lines.

The state has also been able to sustain most of its rail network since transcontinental lines of the former Santa Fe (Chicago - Los Angeles) and Southern Pacific (Sunset Route from Los Angeles to Texas/Louisiana) remain in service.

In any event, included here is a brief overview of the state's railroads, covering their history as well as present-day operations.

Additionally, links to other pages here at the site covering related subjects are also featured. 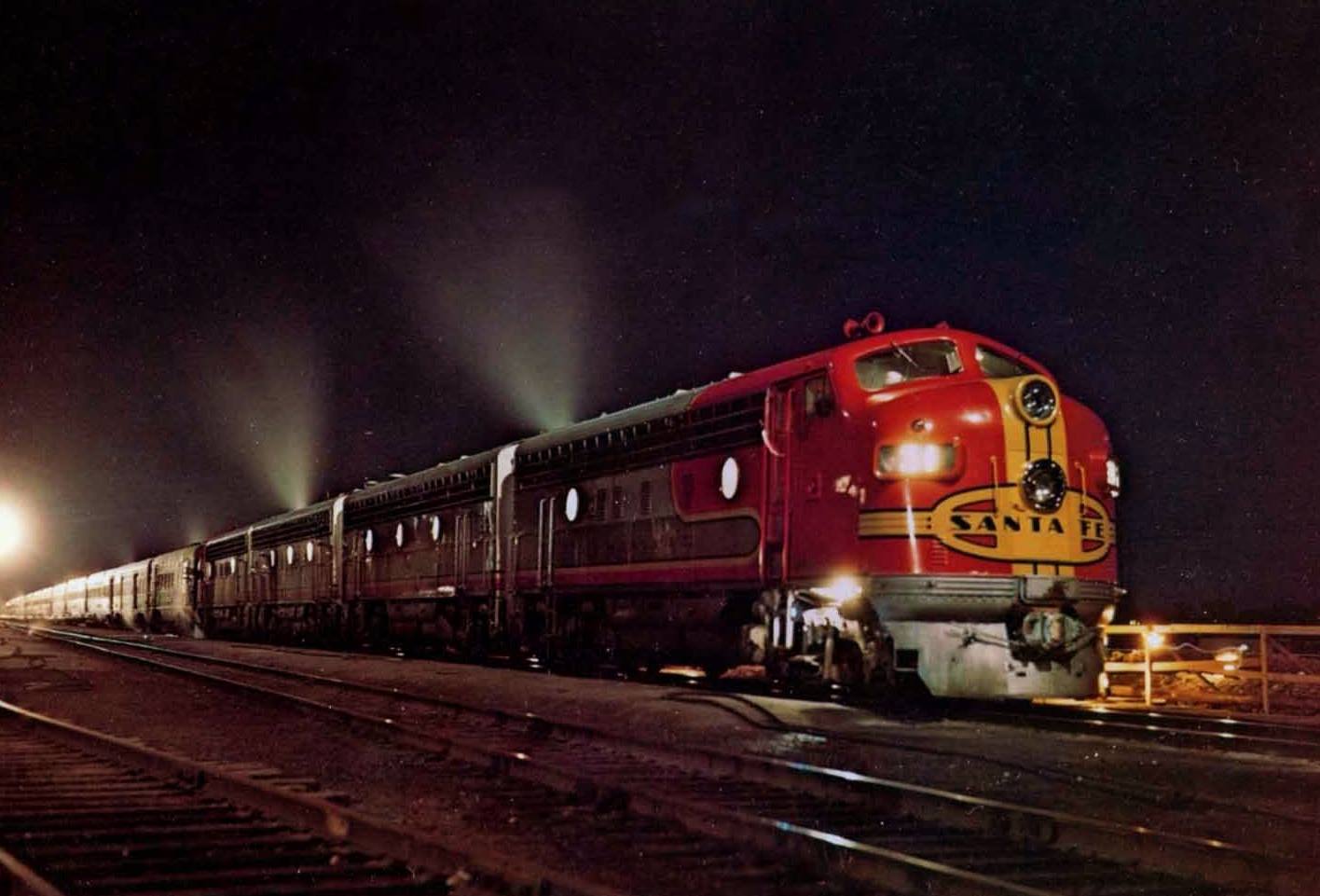 Railroads in the state got their start in 1877 when the Southern Pacific arrived in Yuma on its way to completing its line to Tucson in 1880.

Over the years Arizona would become home to seventy-six different railroads although most of those have since been either abandoned, sold, or merged (actually, many disappeared during the industry's early years due to poor management, economies, or other factors).

One thing that has not changed, however, is the natural resources it has been known for which include coal, copper, and (to a lesser extent) timber/wood products.

Arizona has been one of the few states to primarily retain its original number of Class I railroads, dropping from three to only two.

Prior to the mid-1990s Arizona railroads included Class Is Southern Pacific and the venerable Atchison, Topeka & Santa Fe Railway both of whom had their main lines running east-west across the state.

And before the fall of 1924 this also included the oft forgotten El Paso & Southwestern, a later SP subsidiary.

For more information about Arizona's "classic lines" please visit the links listed below to learn more about them: 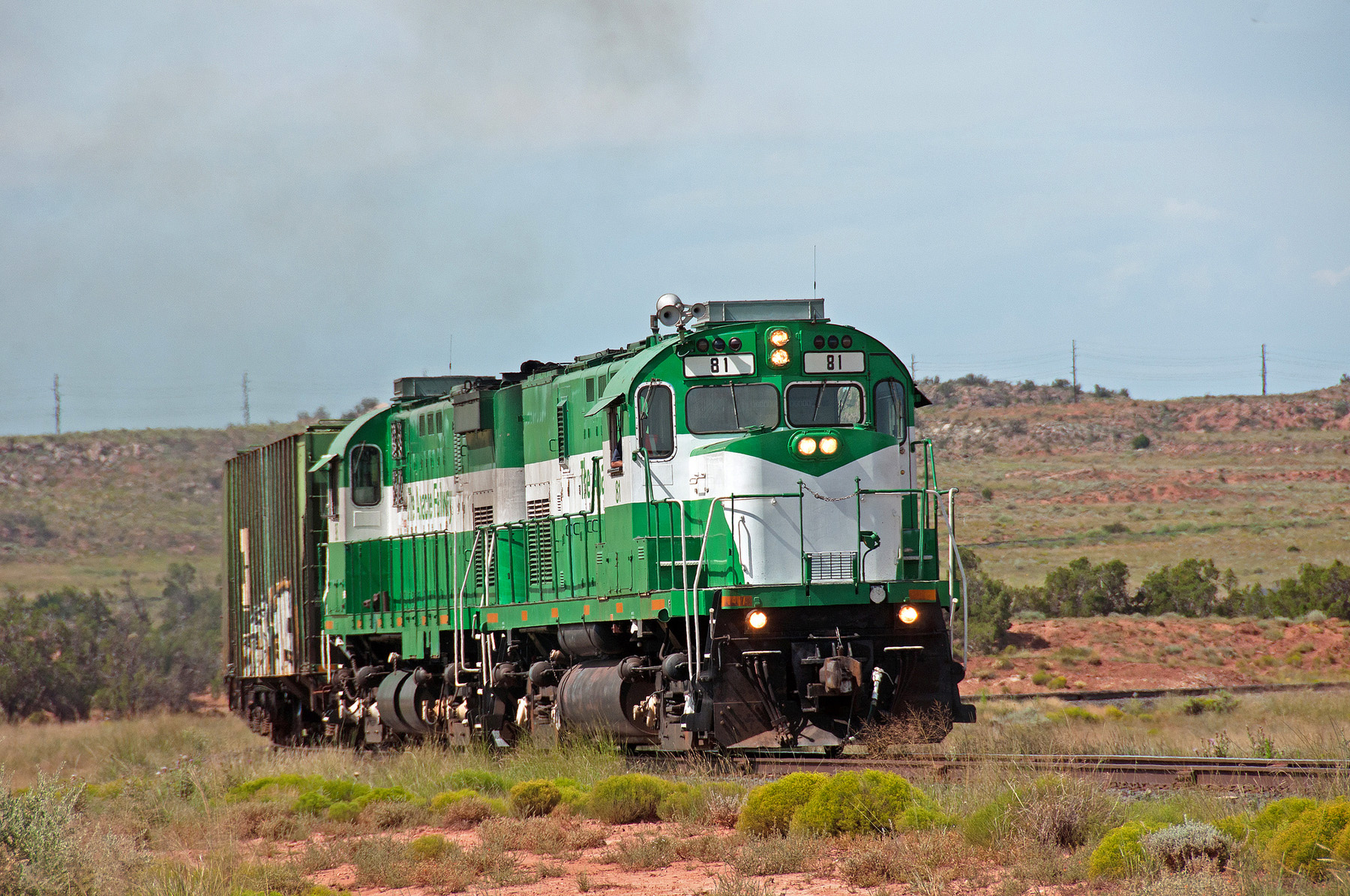 In terms of overall mileage, currently Arizona ranks somewhat low at just over 1,800 route miles. However, during the "Golden Age" of the railroad industry the state was home to about 2,500 miles.

As such, Arizona has lost about 28% of its rail infrastructure, which actually is much less than other states. In any event, the short table below lists its mileage rise and decline. 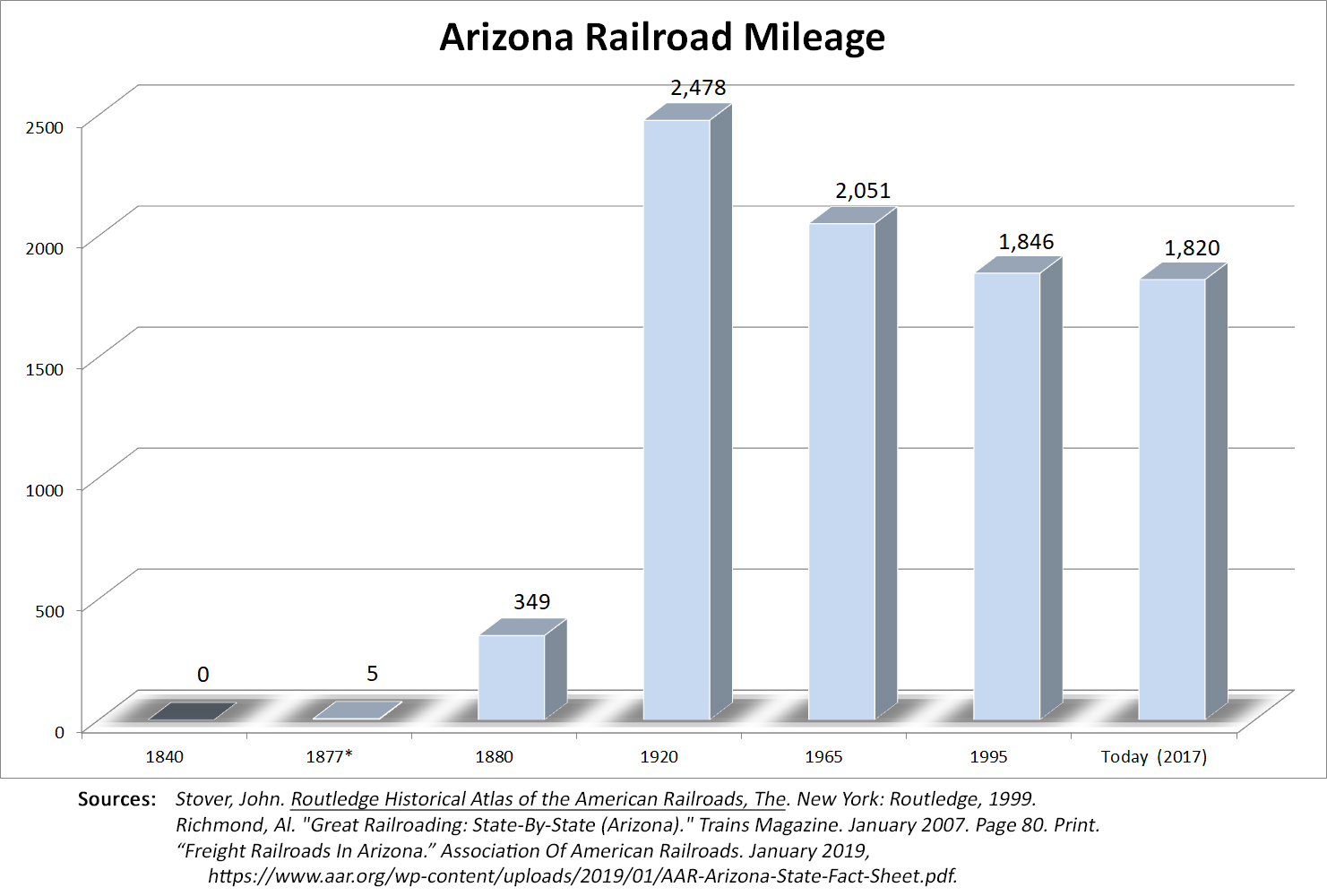 * Arizona's involvement with the railroad began in 1877 when Collis Huntington's new Southern Pacific, striking out eastward from Los Angeles, arrived in Fort Yuma, Arizona in May, 1877 (about 5 miles across the California border).  The SP would go on to reach New Orleans through a series of new construction and acquisition; a corridor which became famously known as the "Sunset Route."

Regarding the Class I railroads their larger terminals in Arizona include Tucson, Phoenix, Casa Grande, and Yuma along the Union Pacific and BNSF has yards in Phoenix, Flagstaff, and Winslow. 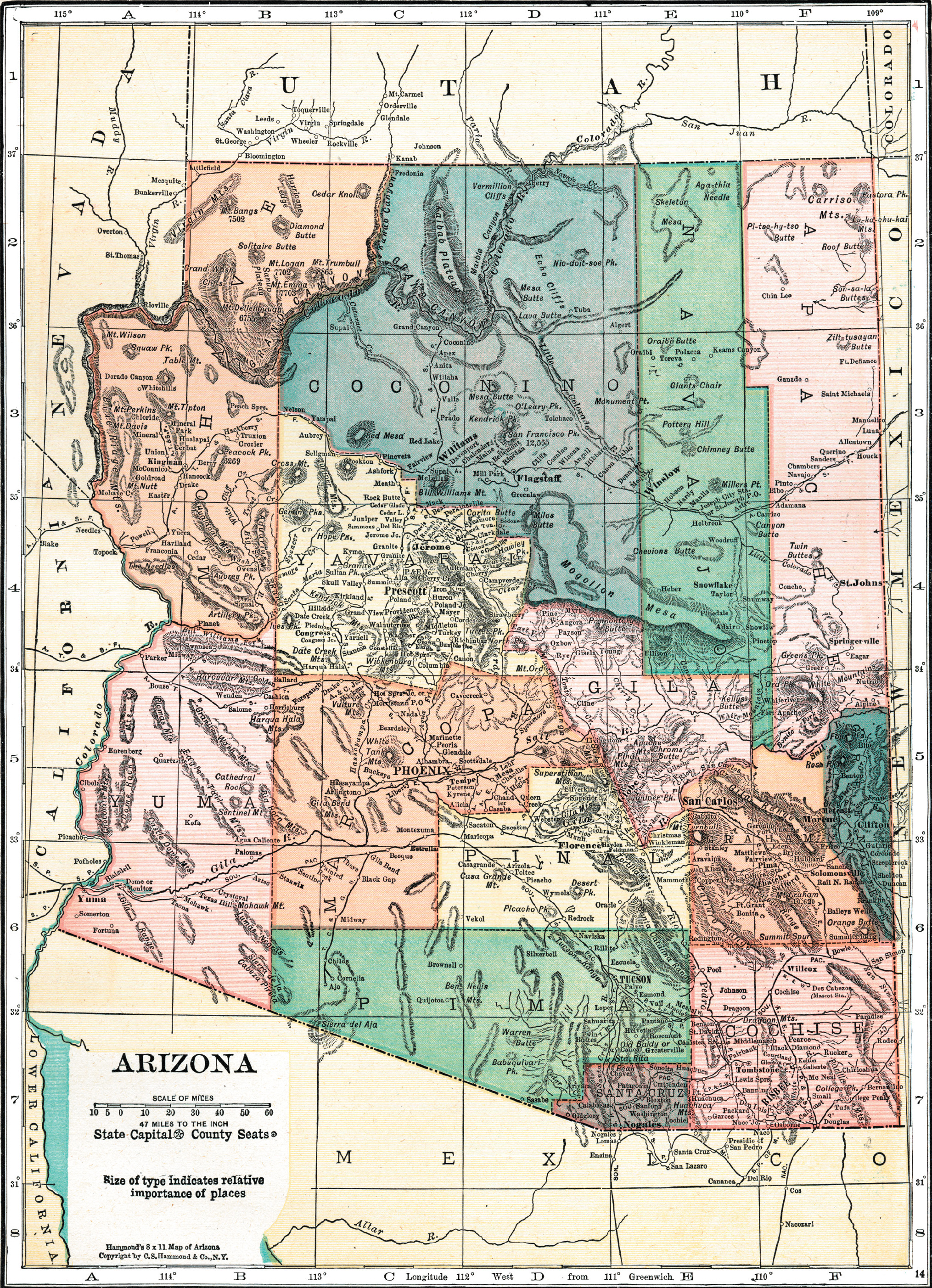 An Arizona railroad map from 1920 showing all of the state's railroads in service at that time. Author's collection.

Today, passenger service is still available in the state with the Los Angeles-Chicago Southwest Chief along the BNSF Railway stopping at Winslow, Flagstaff, and Kingman. Also, the Sunset Limited along the UP stops at Benson, Tucson, Maricopa, and Yuma.

The state has been able to retain most of its original network thanks to the through lines which crisscross its borders, notably Southern Pacific's old Sunset and Golden State Routes along with Santa Fe's Transcon main line (Chicago-Los Angeles).

The one notable loss was much of the El Paso & Southwestern system.  At its peak the EP&SW maintained over 1,200 route miles and linked Tucumcari, New Mexico with Benson, Arizona via Douglas, Hermanas (New Mexico), and El Paso (Texas).

In 1924 it became part of Southern Pacific.  Through the 1960s much of the EP&SW was abandoned as either redundant or traffic (copper, coal, and timber) played out.

Its notable remaining segment was the Tucumcari-El Paso main line, which became SP's "Golden State Route," in conjunction with the Rock Island, to Chicago.

Finally, Phoenix operates a light rail system known as the Valley Metro Light Rail. At the time of this writing in 2008, the line served Tempe, downtown Phoenix, and terminated to the north at 7th Avenue and Camelback Road.

Since then, the project has been greatly expanded.  It now reaches as far north as West Dunlap Avenue and North 19th Avenue in addition to running as far east as Gilbert Road and East Main Street in Tempe.  The line forms a rough "L." 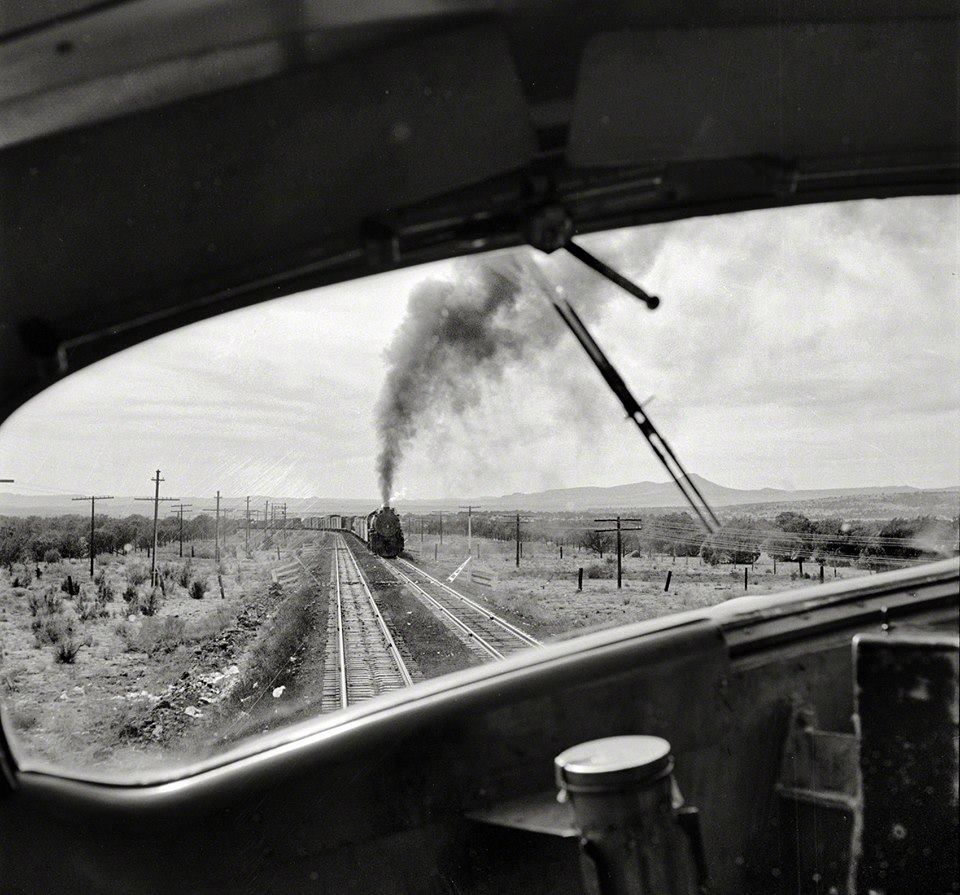 Seen from the fireman's side of the cab, a Santa Fe FT heads west as it passes a steam-powered, eastbound manifest near Ash Fork, Arizona during March of 1943. Jack Delano photo.

As far as museums and tourist lines are concerned, take your pick! There are plenty to choose from and include the: 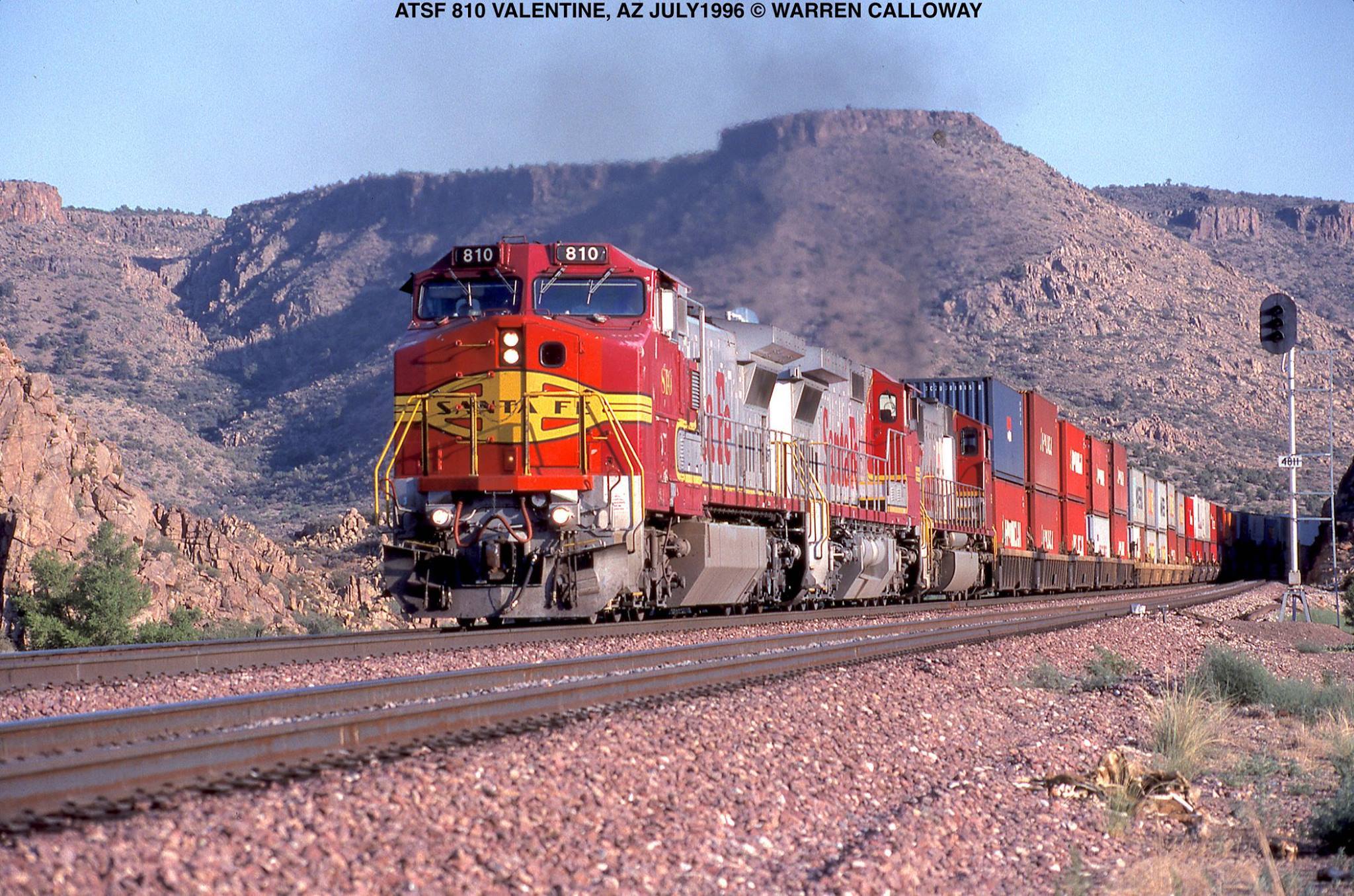 A pair of Santa Fe C40-8W's and what appears to be an Electro-Motive unit lead containers on the Transcon near Valentine, Arizona during July of 1996. Warren Calloway photo.

All in all Arizona railroads are well worth the trip to see with the backdrop of beautiful deserts and mountains.

So, whether you plan to ride the tourist railroads, visit the railroad museums, or just go out and railfan one of the state's many short lines or two Class I railroads you should have a wonderful time!