The B unit, sometimes referred to as a cabless or booster unit, was a locomotive that as the previous term suggests did not utilize a cab.

The design was first introduced during the early diesel era by Electro-Motive on its first freight and passenger models as a means of offering more horsepower via a set, such as an A-B-A or A-B-B-A.

It was copied by other major locomotive builders at the time such as Baldwin, American Locomotive Company (Alco), and Fairbanks Morse.

The Bs were primarily developed for cab models, a different term for a type of diesel design that featured a streamlined body and cab on one end.  However, they were built for other designs as well, such as first-generation road-switchers and even newer models.

By the 1950s B units fell out of favor as railroads began purchasing more utilitarian road-switchers.

Interestingly, however, into the 1990's some roads, like the late Santa Fe and Burlington Northern purchased cabless variants of EMD and GE products for use in various assignments.

It was an interesting decision during an era when the concept had largely since been abandoned. 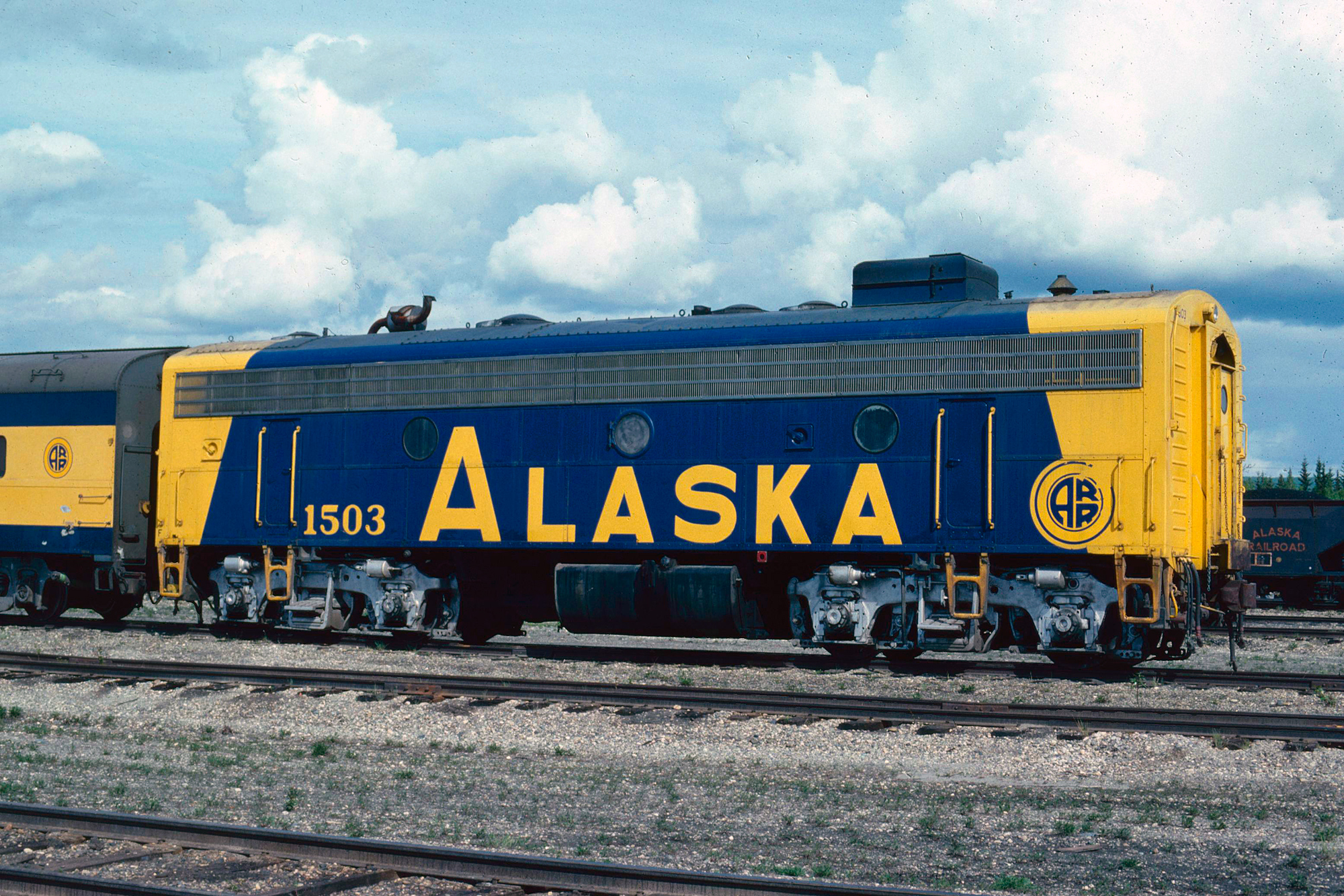 The first B units first appeared with the introduction of Electro-Motive Corporation's original EA series diesel model (the "E" was short for eighteen-hundred horsepower while the "A" meant that also utilized a cab and controls) of 1937.

The locomotive featured two 900-horsepower, 12-cylinder 201-A Winton prime movers and sported a beautifully streamlined carbody that was designed for use in passenger service.

The Baltimore & Ohio was the first railroad to purchase the new concept in 1937, as well as the Atchison, Topeka & Santa Fe (whose units were classified as E1s).

To increase the horsepower output and available tractive effort without requiring an additional crew Electro-Motive came up with the idea of a cabless, "B" unit.

The concept sold a few examples between the B&O and Santa Fe as well as the later early models including the E3, E4, and E5 of 1940.

However, Bs really became popular in freight service where the horsepower was truly needed.  In 1939 Electro-Motive introduced the new FT (that stood for Freight, Twenty-seven hundred horsepower), which was similar to the early Es but featured a less slanted, more rounded nose.

Additionally, it featured the builder's new 12-cylinder model 567B prime mover that was capable of producing 1,350 horsepower replacing the earlier Winton design that had used two power plants on one frame.

The FT was first designed by chief engineer Richard "Dick" Dilworth who also took the concept of applying an additional prime mover within its own frame.

His A-B FT set offered twice the horsepower (2,700) and was semi-permanently coupled using a drawbar similar to what steam locomotives used with tenders.  Pleased with the concept Dilworth added two more units for even more horsepower giving the set an A-B-B-A designation. 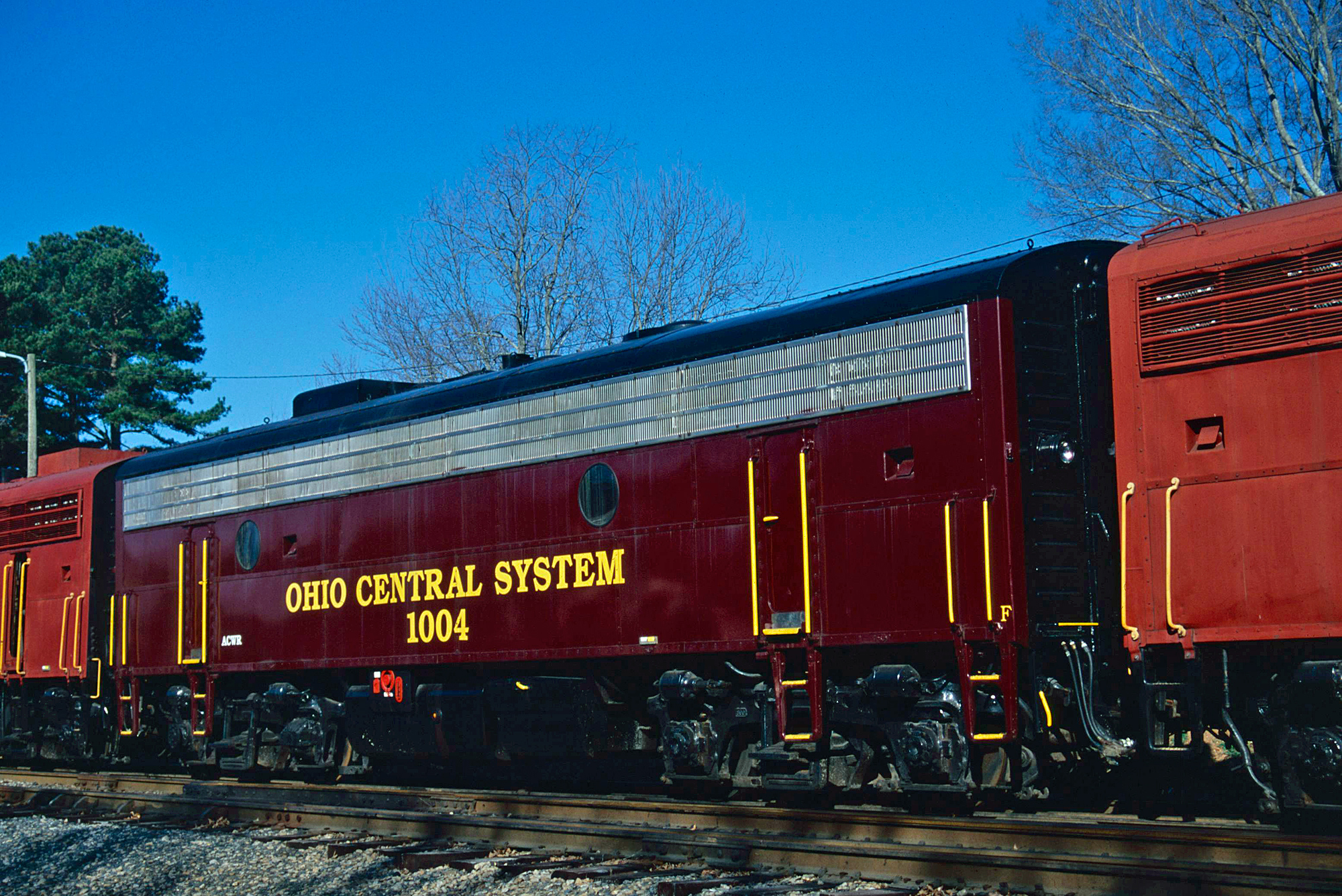 The set proved a sensational success for Electro-Motive and orders for the FT began flooding in. By the time production ended on the model in 1945 it had sold some 555 As and 541 B units.

Future models like the very successful F3 and F7 also sold large numbers of cabless examples with the former seeing sales total 696 units while the latter outshopped an incredible 1,483 locomotives.

Electro-Motive's late era Es including the E7, E8, and E9 had modest sales of B units but nothing compared to their F series counterparts; among the three models there were only 172 examples sold between 1945 and when EMD ended the line in 1964. 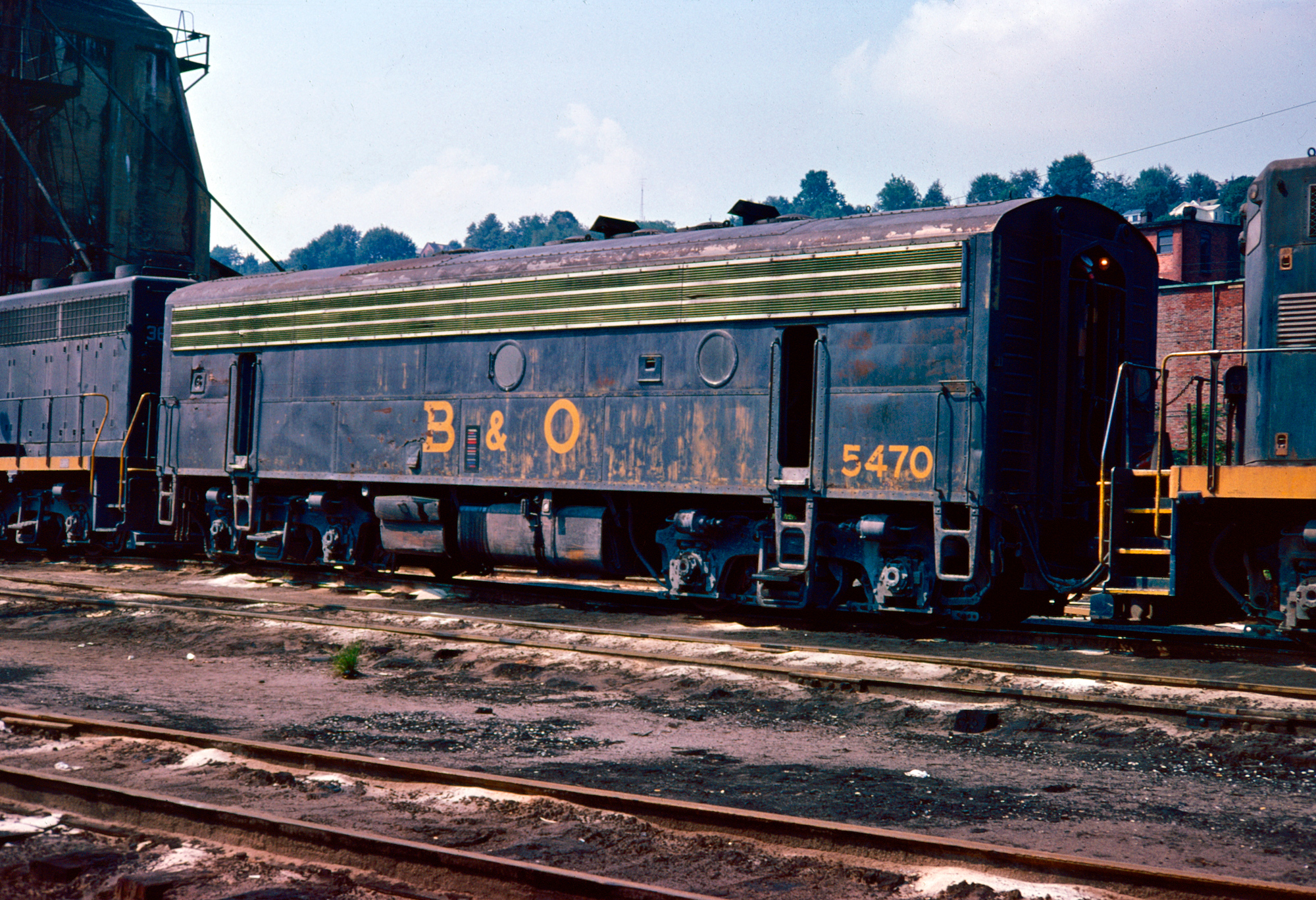 An aging Baltimore & Ohio F7B, #5470, lays over with other power at Grafton, West Virginia in August, 1974. American-Rails.com collection.

Other builders not only followed EMD's lead in cataloging their own cab designs but also offered B examples as well.  For Alco, the then second-largest builder of diesels it only offered two models, the passenger PA and freight FA.

The former sold less than 50 units while the latter was somewhat more successful with a few hundred sold.  For both Baldwin and Fairbanks 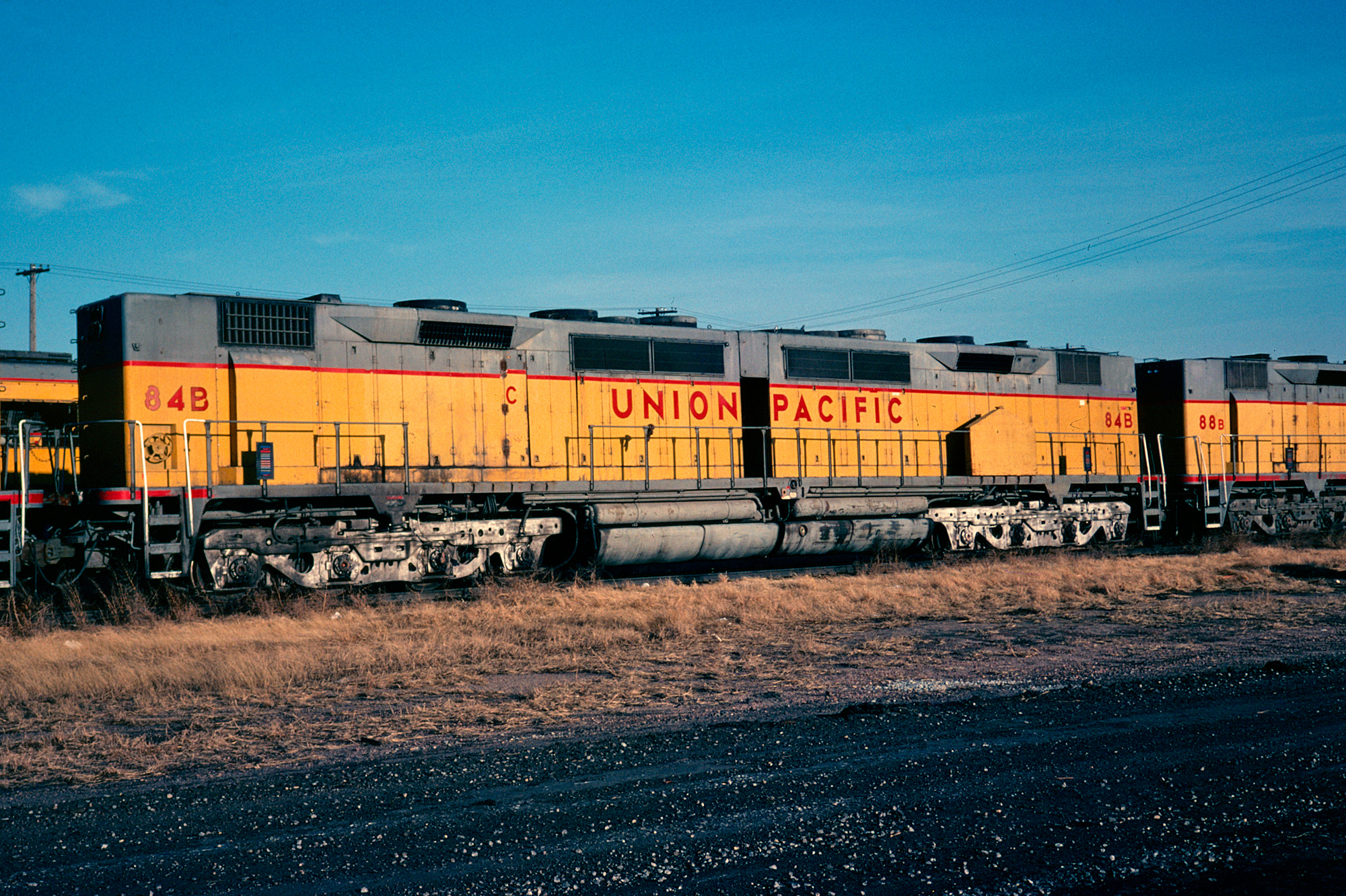 Union Pacific DD35 #84-B in storage at Council Bluffs, Iowa; December 10, 1979. These locomotives were 5,000 horsepower monsters ordered only by UP. They were essentially two GP35's on a single frame. American-Rails.com collection.

Morse these manufacturers cataloged several cab variants with corresponding B units.  However, neither FM's C-Liners and Erie-Builts nor Baldwin's numerous models saw much success; most sold just a few each.

As the 1950s progressed railroads began to show a greater interest in the road-switcher, introduced by Alco in 1941 with the RS1 and made popular by EMD with its GP7 and GP9 models marketed between 1949 and 1963 that sold nearly 7,000 examples!

For many the advantage of the Bs in the way of lower costs and fewer crewman lost its appeal as railroads realized that their operational flexibility, or lack thereof, was a growing issue (without a cab, Bs could not be used unless in conjunction with an "A" unit). 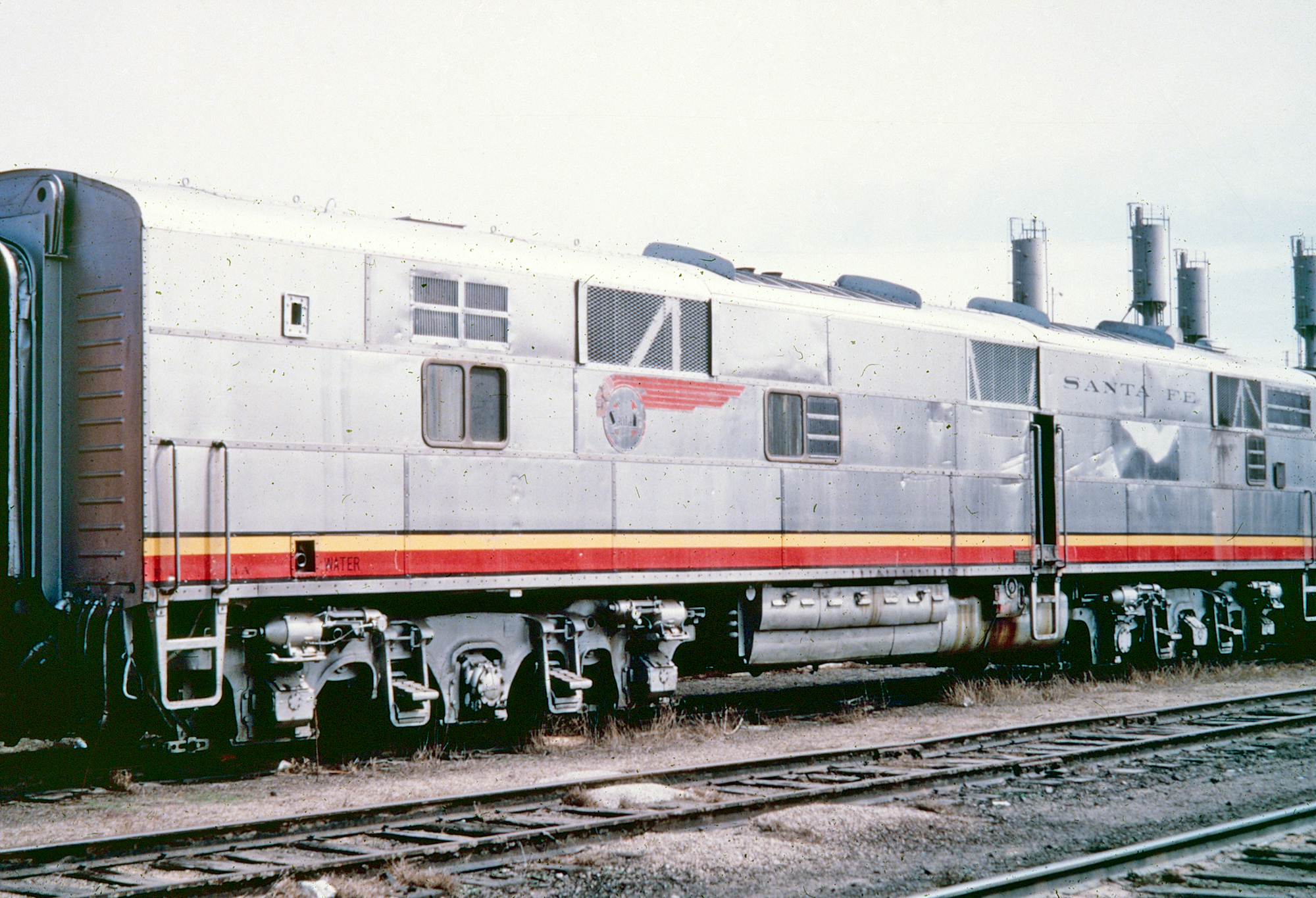 Santa Fe E3B #11-A, one of only two such units ever built, is seen here at Kansas City, Kansas in March, 1967. Fred Byerly photo. Author's collection.

By the time second-generation models began to appear in the early 1960s few lines continued to order B units although some did for road-switchers such as the GP30B, SD24B, and SD45-2B.

Additionally, some lines like the Chicago & North Western rebuilt B units into As such as with their famous "Crandall Cab" variants constructed from former E8Bs and E9Bs that featured custom-made cabs.

The Santa Fe was one of the only major railroads to continue ordering Bs all of the way through the modern era acquiring new GP60Bs until 1991.