The Bamberger Railroad grew into one of the most successful and efficient interurbans to ever operate.

The system began as a traditional steam road of the early 1890s, and its founder eventually decided to transition the property into an electrified interurban which was all the rave at the time.

He believed the line could strongly compete with the larger traditional carriers for passenger traffic between Salt Lake City and Odgen, and built the Bamberger to very high standards.

The property was so well built that the interurban consistently offered some of the fastest transit times of any in the industry.

It experienced a rough patch and reorganization during the 1930s but remained privately and family owned until the early 1950s when it was sold to Texas interests.

After only a few years of operating the now-dieselized railroad the new owners claimed it was not profitable and subsequently abandoned sections of the property, selling off the rest. 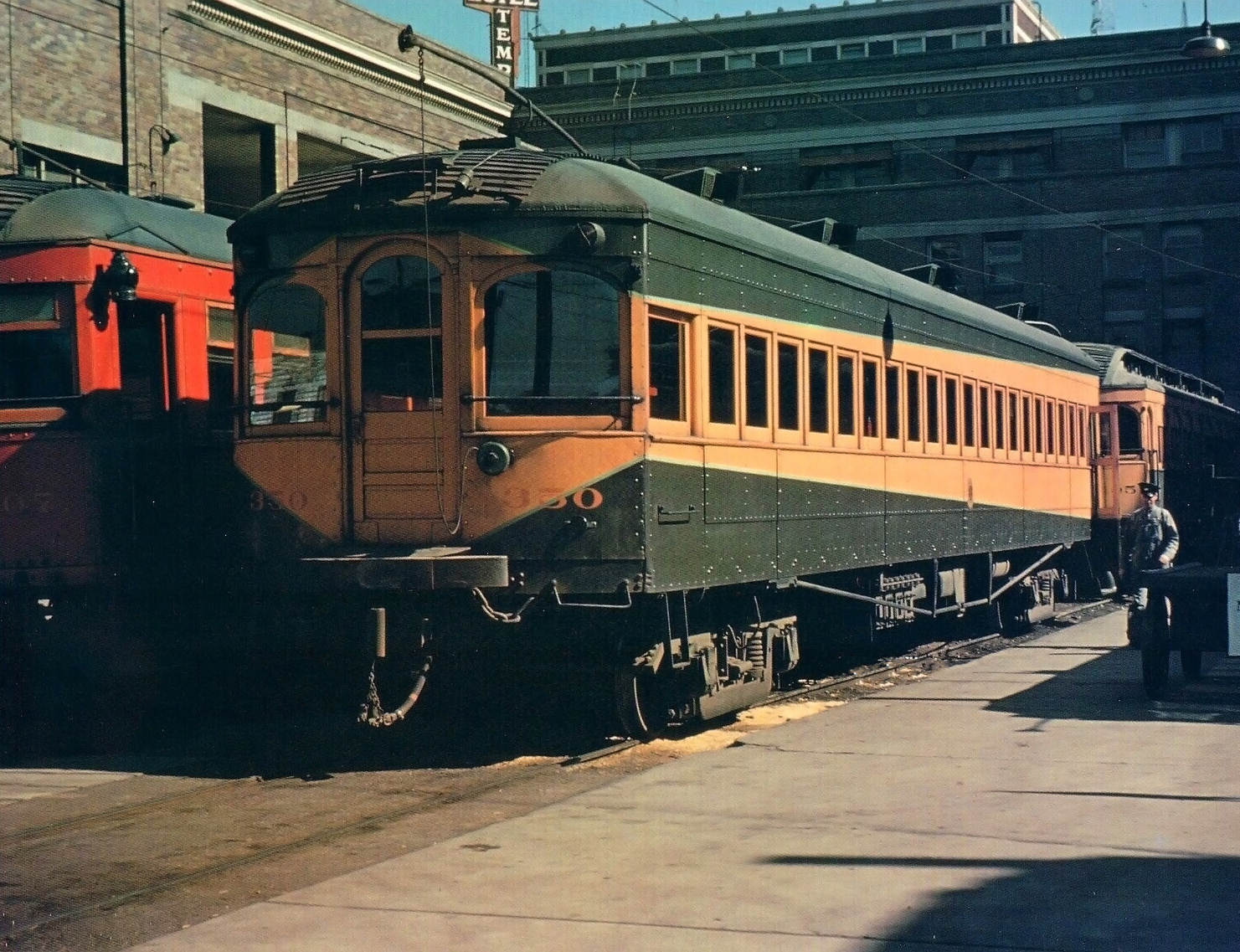 Bamberger Railroad MU #350 (manufactured by the Jewett Car Company in 1916 as #426 and renumbered in 1918) is seen here at the depot in Salt Lake City in 1939. The interurban's livery was an attractive design of green and yellow. Richard Kindig photo.

The railroad's history begins with its founder, Simon Bamberger who in 1891 chartered the Great Salt Lake & Hot Springs Railway to connect the residents of Salt Lake City with the popular Beck's Hot Springs located just to the north.

Soon after opening his new railroad Bamberger had ambitions to continue his system northward and eastward as a means of providing better passenger service and increase freight revenue for the company.

Because he was already a successful coal miner Bamberger hoped to use his railroad not only as a profitable business venture but also to serve his mines in the region, one of which was located to the east of Salt Lake at appropriately-named Coalville.

Progress was slow but Bamberger continued his march northward in 1892 reaching Bountiful and within three years had reached Farmington giving the railroad about a 17 mile system.

Because the entrepreneur had built the GSL&HS to such a high standards with privately-owned right-of-way, low grades (no greater than 1.1%), tunnels, and wide sweeping curves he ran into financial difficulties by the time the line reached Farmington (along with the fact that traffic probably had not reached intended or hoped for levels).

As a result the company was reorganized as the Salt Lake & Ogden Railway in October of 1896.

To increase ridership Bamberger built the Lagoon Resort near Farmington, an idea that turned out to be quite successful (the resort is still in use today). The company's money troubles, though, halted any further construction for more than five years.

In 1902 building continued, reaching Kaysville by May of 1906 and then Layton by that September.

Finally, after two more years of construction the route was completed to Ogden in July of 1908 and officially opened for business on August 8th.

Due to the high cost of the line, which included a double-tracked right-of-way, Bamberger dropped his planned extension to Coalville and focused on promoting his newly completed railroad, which now stretched nearly 40 miles.

Up through this time Bamberger had always run his operation with traditional steam power. However, during the first decade of the 20th century the interurban craze was fully underway.

He realized that his road was a good candidate as such an operation with two large cities served, strong passenger traffic, and a relatively good base of freight.

So, it was decided to electrify the SL&O which was completed in the spring of 1910 and opened on May 28th of that year.

Electrical power for the system would also come relatively cheap because of his coal-mining interests and he constructed a power plant at Farmington to serve the SL&O's needs.

The new interurban used passenger equipment from the Niles Car & Manufacturing Company as well as the Jewett Car Company, both of which were located nearly across the country in Ohio ("Ground Zero" of the industry and where most car builders were located).

Not surprisingly, with the SL&O's well-engineered line it offered some of the fastest transit times of any interurban with speeds averaging better than 35 mph, a fact not lost on its passengers.

Its limiteds were known as Flyers and could make the run between Ogden and Salt Lake in just one hour. This speed and efficiency led to the road's famed slogan Every Hour, On The Hour, In An Hour. 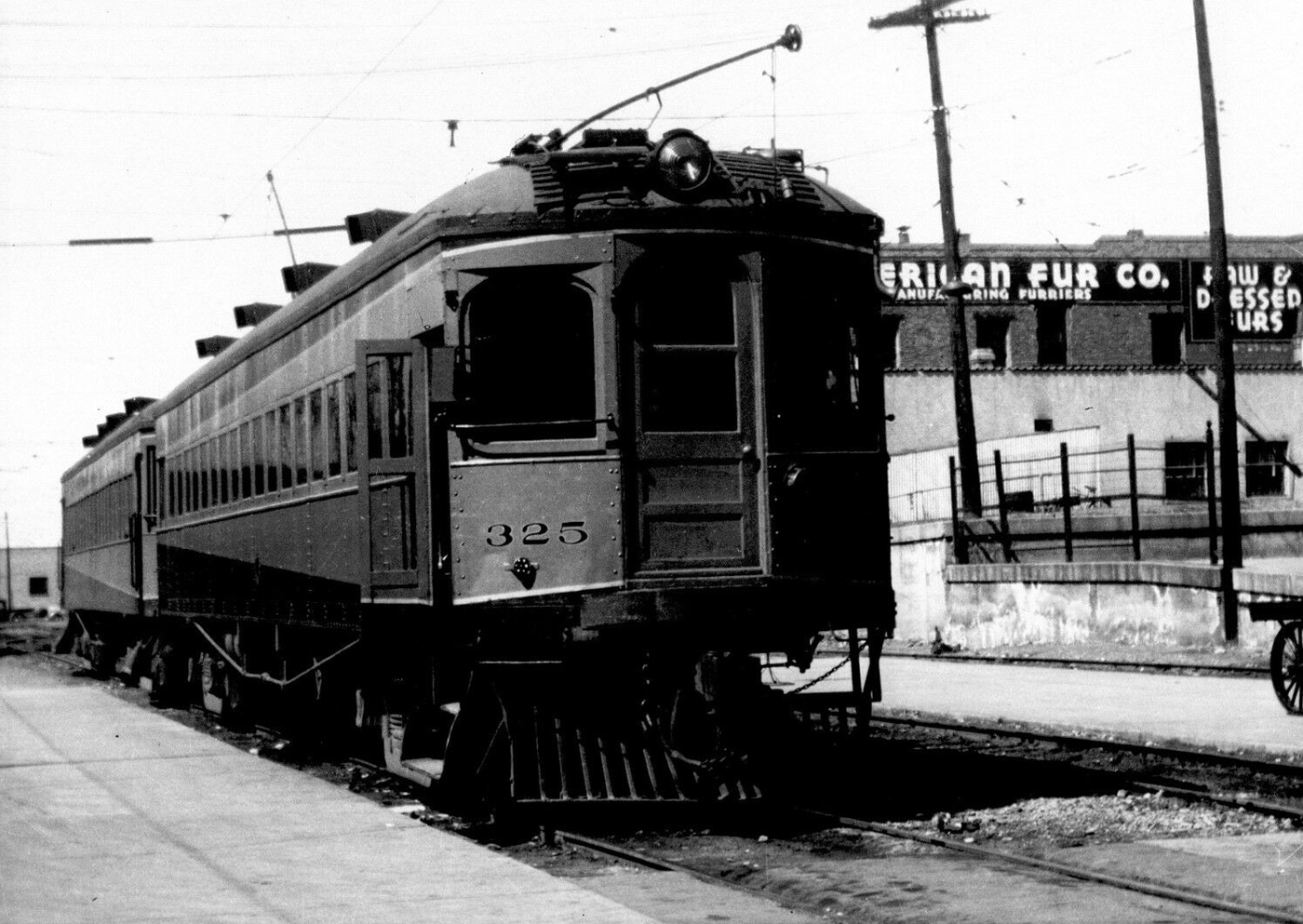 Bamberger MU #325 is seen here in Ogden, Utah during the World War II era. This particular car (built as a single compartment coach in 1910 as #402). Russ Schram photo.

In August of 1917 the SL&O officially changed its name as the Bamberger Electric Railroad since locals had been referring to it as the "Bamberger" for years.

The interurban industry's decline began as early as 1920 but was particularly hit hard by the Great Depression at the end of the decade. The Bamberger wasn't able to escape the hard times and fell into bankruptcy in 1933.

In 1938 it purchased five high-speed, lightweight interurban cars from the Fonda, Johnstown & Gloversville Railroad. These very fast streamliners were built by the J.G. Brill Company and could operate up to 65 mph.

They were a hit with the public, just as on the FJ&G, and helped to keep up with growing demand. In 1939 the company emerge from its receivership as simply the Bamberger Railroad but remained a privately owned operation headed by Simon Bamberger.

The World War II conflict saw traffic levels recover and a return to prosperity for the company as it not only moved troops to military facilities around Ogden but also significant supplies for the war effort. 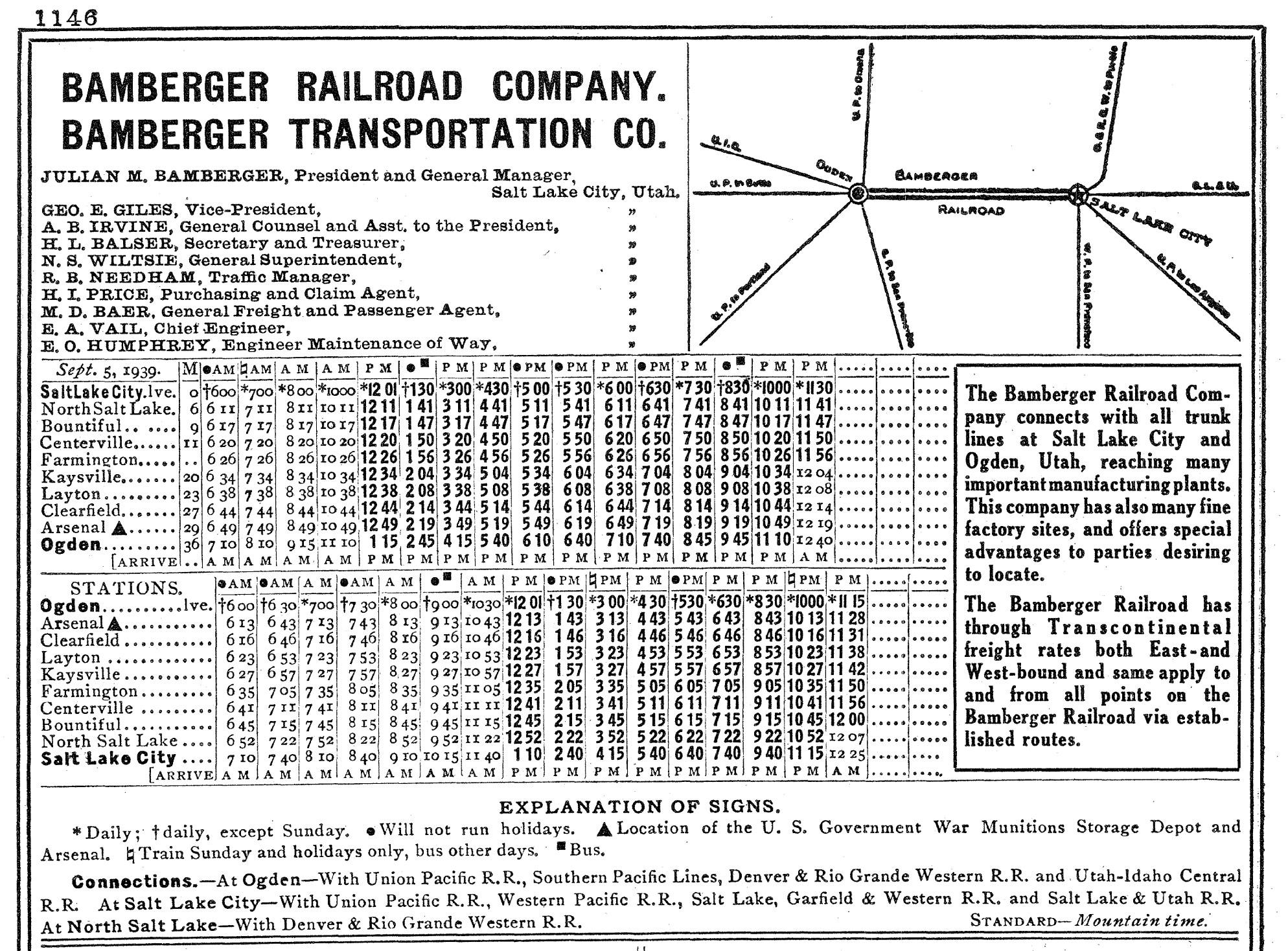 An official, 1940 timetable of the Bamberger Railroad. Author's collection.

In 1943 the interurban purchased its first diesel locomotive, an Alco RS1 #570 to serve the Hill Army Air Field and Ogden Ordnance Depot as the spur reaching these facilities was not electrified.

All of the railroad's diesels were equipped with trolley poles to activate the company's automatic block signaling system that had been installed in the late 1930s to reduce operating costs (which had removed the second track and curtailed trains to a single crewman).

That year also witnessed the interurban ending all passenger trains, with the final run occurring on June 6th, which subsequently saw electrification shutdown.

After this, the company was strictly a small, freight-only short line.  To read more about the interurban's history please click here. 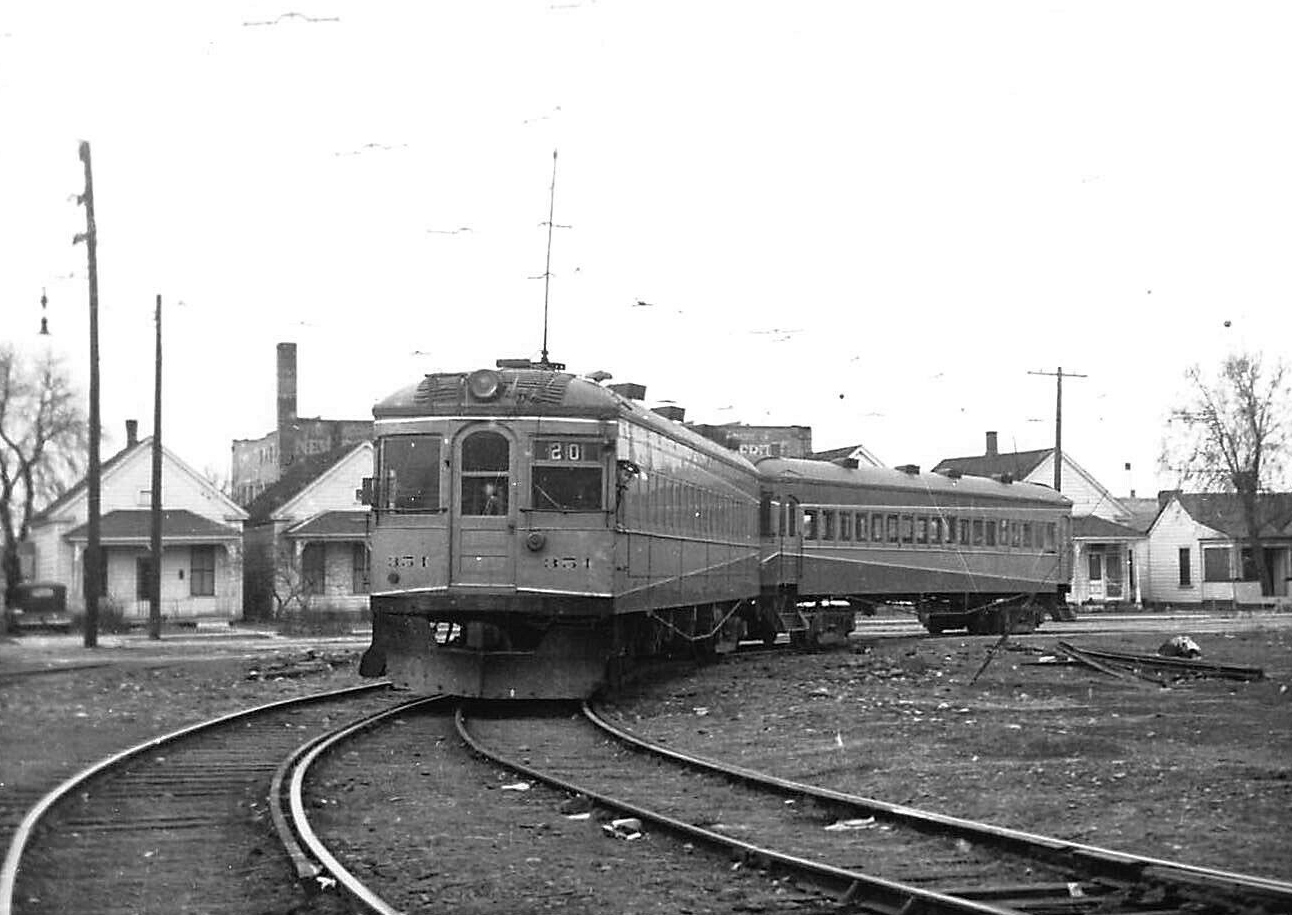 The end for the Bamberger was a rather sad affair. By the 1950s the road was being managed by Simon's son, Julian Bamberger.

With his retirement nearing and no other family members to continue running the company it was decided to sell out to a third party, in this case the Murchison interests based in Dallas, Texas.

The sale was finalized on August 23, 1956 and the owners claimed that no changes would be made in the running the railroad but this stance soon changed.

Stating that the operation was unprofitable the investment firm decided that they could make more money by abandoning the property and selling off what was left.

The Interstate Commerce Commission approved the application and the Bamberger Railroad shutdown after in December of 1959 with UP acquiring the northern 13 miles and the Rio Grande the southerly seven miles.