The Bar Harbor Express was a long-running seasonal train serving northern New England and southern areas of the Northeast.

It was launched by the New Haven during the late 19th century and through connections with the Boston & Maine, Maine Central, and later Pennsylvania, provided summer vacationers connections to resorts along Maine's Bar Harbor.

It was one of the region's few all-Pullman operations but enjoyed a great success seeing high patronage for many years and was considered one of the most important trains over all of the railroads it operated except (for perhaps the Pennsylvania).

The train saw lightweight equipment added to its consist during the streamliner era and during its final years operated only a few days per week.  It was discontinued in the early 1960s subject to the MEC's cessation of passenger operations.

The history of a seasonal train connecting the busy metropolitan areas of the Northeast with the tranquil solitude of Maine's coastal regions begins with its inaugural run from Boston to Mount Desert Ferry on June 29, 1885.

From the outset the train was a seasonal run only operating during the summer months running roughly between mid-June and mid-September according to Kevin Holland's, "Passenger Trains Of Northern New England, In The Streamline Era."

It had various upgrades over the years and improvement of services; most notably in 1917 when, following the opening of Hell Gate Bridge, the train could run through into New York City.

The New Haven operated the train to Springfield, Massachusetts where it was handed off to the Boston & Albany which carried it as far north as Worcester, Massachusetts.  From there the Boston & Maine handled it to Union Station at Portland, Maine.

From this point the Maine Central operated the final leg to Bar Harbor at a location known as Mount Desert Ferry.  Before the days of direct road access this wharf allowed passengers to de-board and catch a boat to cross the waters and reach the resorts at Bar Harbor.

According to John Stilgoe's, "Train Time," the New Haven soon came to dislike its B&A connection and began operating the Bar Harbor Express over its own rails to the B&M interchange at Worcester.

In 1917 the New Haven was able to complete the Hell Gate Bridge into downtown Manhattan and a connection with the PRR's Pennsylvania Station.

This new artery allowed the train's extension much further south, running essentially the entirety of the Northeast Corridor terminating at Washington, D.C.

With this extension the Bar Harbor Express gained additional patronage and Mr. Stilgoe's book states that it regularly ran in three sections during the 1920s, occasionally even carrying privately-owned cars.

From D.C. the train left every afternoon at 1 PM and arrived in Portland at 4:24 AM the following day.

From here it split into five different sections: one reached Kineo and Waterville; another connected with Rockland via Bath, Wiscasset, Waldoboro, and Thomaston; another reached North Conway, Crawfords, Bretton Woods, and Fabyan; there was a section to Kennebago; and finally, the popular section to Bar Harbor via Ellsworth and Mt. Desert Ferry.

The return southbound train left Bar Harbor at 2:00 PM each day and collected at Portland before connecting southward over the B&M.

According to a September, 38, 1941 timetable the train operated with several sleepers, a buffet-lounge (Ellsworth - Philadelphia), and a diner (New York - Washington, Bangor - Portland).  During World War II the Bar Harbor Express saw service interrupted but during and for some time after the conflict it still remained popular.

In the streamliner era the train began fielding some lightweight Pullman equipment and modernized heavyweights but still operated with some traditional heavyweight cars.  By the late 1940s it began witnessing its first widescale cutbacks operating north of Washington and Philadelphia on Mondays, Wednesdays, and Fridays while departing Maine on Sundays, Tuesdays, and Thursdays according to Mr. Holland's book.

Additionally, the train was terminated at Ellsworth where passengers could then take bus service to the island. By 1955 services were further reduced; northbound runs occurred only on Tuesdays and Fridays and southbound trains operated on Wednesdays and Fridays.

Interestingly, even in this late era the Bar Harbor still carried a total of seven sleepers at various points throughout the trip during weekday running.  Amazingly, three more sleepers were still added for the ever-busy weekend service at this time.

As the Maine Central reduced its passenger operations with great fervor throughout the 1950s the Bar Harbor was not immune from these cutbacks; in 1957 it lost through service to Ellsworth and operated no further than Bangor forcing passengers to make the 30-mile ride via bus service to reach the island. 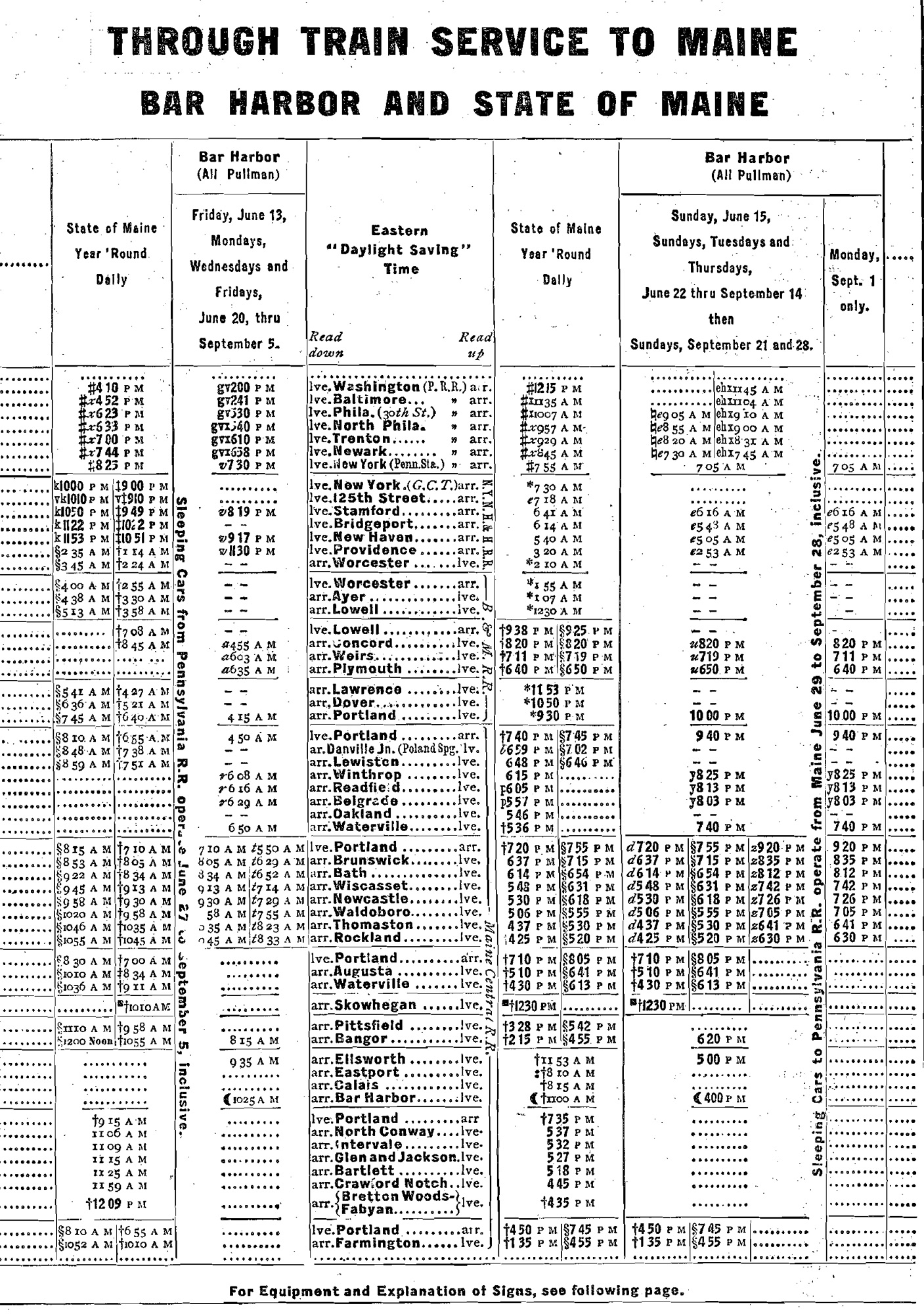 After years of trying the MEC was finally granted permission to end all remaining services over its system after September 6, 1960, which included the Bar Harbor.  Interestingly, for several years following the railroad continued to provide freight service over the Ellsworth line, which continued until 1985.

The many years of strong patronage the Bar Harbor enjoyed was one of the few success stories amongst New England passenger trains (in regards to the long period of time in which it operated).  It led to the Boston & Maine replicating service to other vacation destinations, which also proved a popular endeavor.

Today, Mr. Stilgoe notes that several of these Maine resorts are still in operation albeit lacking rail service, of course, and outside of the Bar Harbor area can still be tough to find even via automobile.