The Buffalo Creek and Gauley Railroad was a short line in the hills and hollows of West Virginia that was less than 20 miles in length.

However, it became legendary for being the last place in the country one could still find steam locomotives in regular service and railfans and historians flocked to the tiny towns of Dundon and Widen located in Clay County to see these brutes soldiering on.

Unfortunately, when the coal mines and lumber business had completely dried up in the 1960s so did the railroad and the last regular scheduled freight train departed for the B&O interchange at Dundon on February 27, 1965.

While the railroad was revived twice during the 1970s and 1990s, it sat dormant and abandoned for years until 2005 when the Buffalo Creek and Gauley Railroad Co-Operative was formed to revive the entire railroad between Dundon and Widen as a tourist railroad. 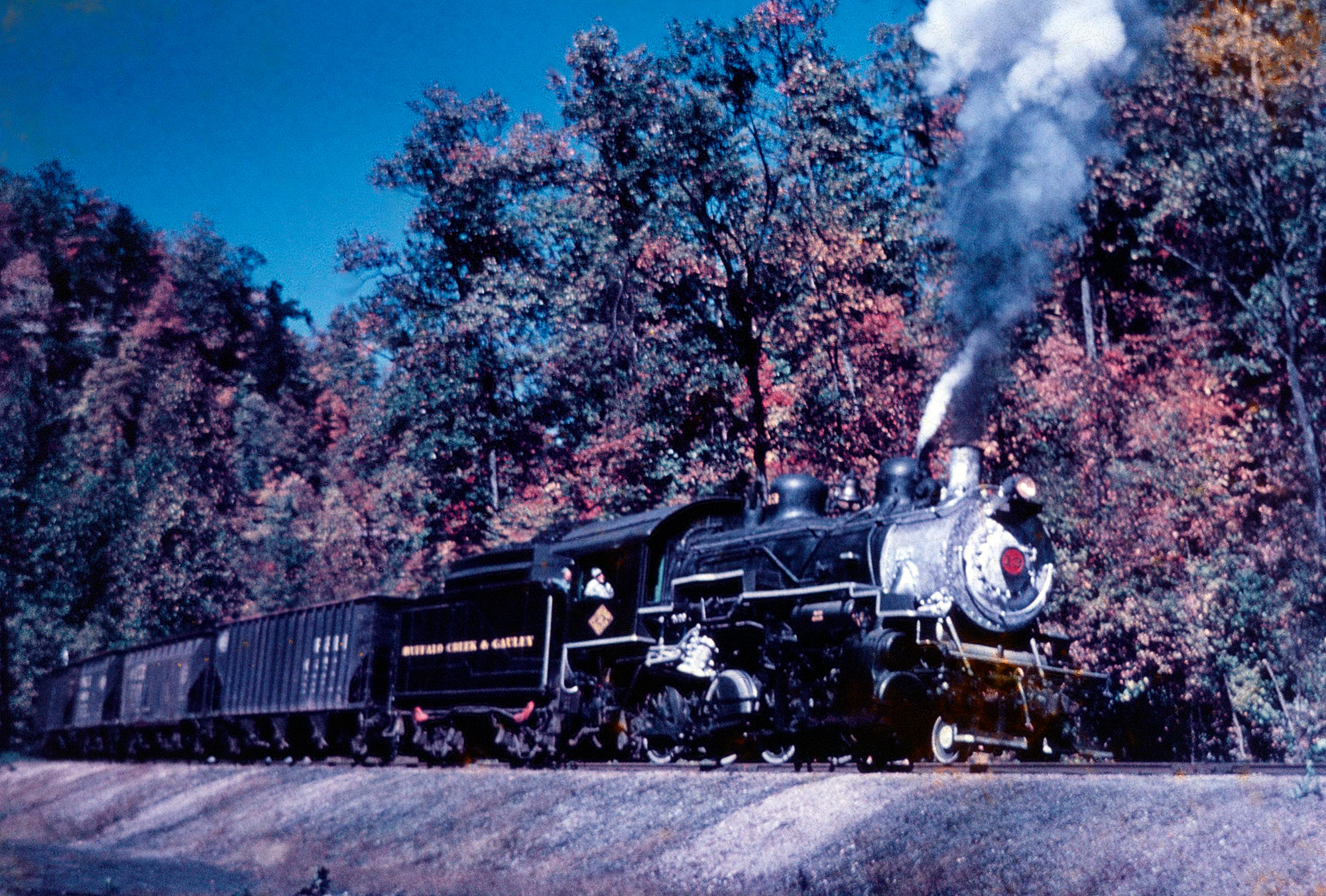 The BC&G has proved to be a line that just won't go away. It's history dates only back to the early 20th century when it was chartered by the Elk River Coal & Lumber Company (which was organized by Joseph Garner Bradley) in 1904 to serve the company's future coal and lumber interests in the region.

The railroad was initially planned to be quite an endeavor at over 100 miles in length connecting Dundon in Clay County with Huttonsville in Randolph County. Unfortunately, those ideas never materialized and the railroad only reached a short distance east of 18 miles from Dundon to Widen.

About seven years after the railroad was chartered it finished its farthest stretch eastward to Widen in 1911. That same year Rich Run Mine was opened giving the BC&G increased traffic (very early in the railroad's existence a small coal mine existed near Dundon giving the railroad an initial source of traffic). 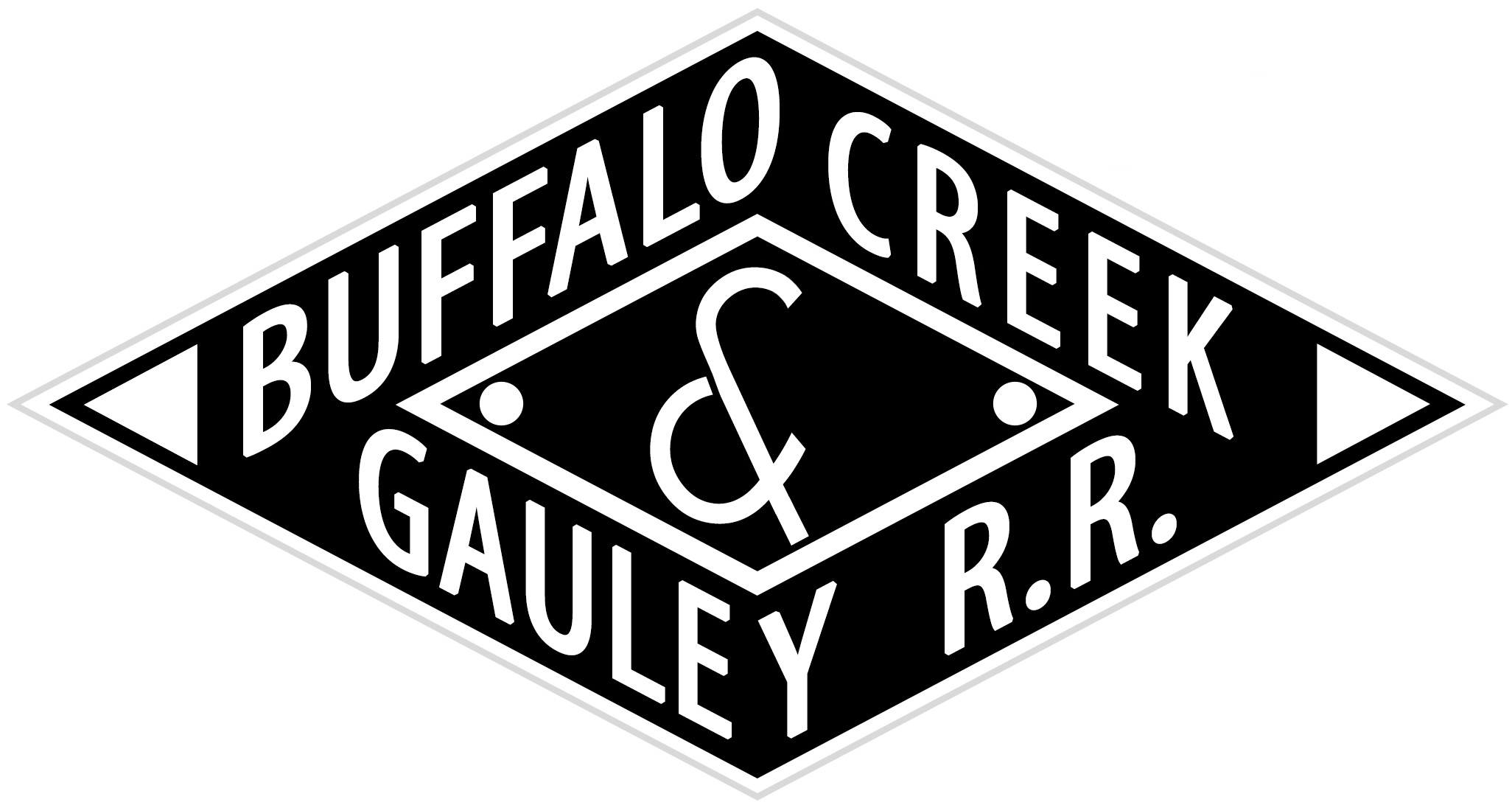 Then, in 1918 the sawmill at Swandale, located about halfway between Dundon and Widen opened. These vast sawmill operations and coal mine at Rich Run (near Widen) would prove to be the BC&G primary source of traffic for much of its existence. 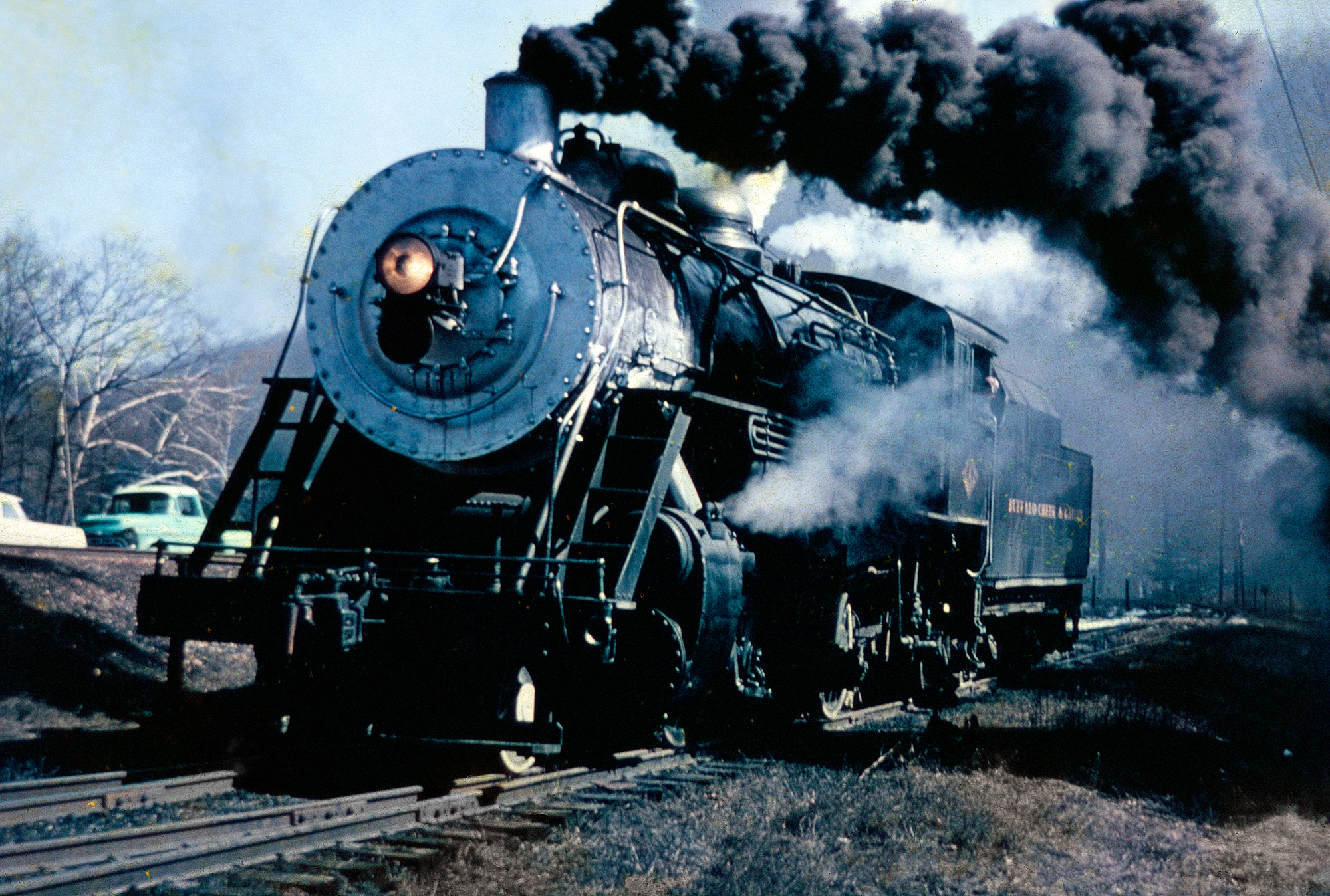 Buffalo Creek & Gauley 2-8-0 #4 steams up for railfans during a day of photo shoots and run-bys and the fall of 1964. Larry Fellure photo. American-Rails.com collection.

Interestingly, of the BC&G's steam locomotives only four were ever purchased new, 2-8-0 Consolidation #4 from Baldwin Locomotive Works in 1926, and three Climaxes.

Of note, the BC&G did roster a few diesel locomotives including; a Plymouth 44-Tonner, Whitcomb 65-Tonner, and even an Alco S1.

Please note that the below roster also includes its fleet of geared steamers used in logging service on the commonly-owned Elk River Coal & Lumber Company operation. 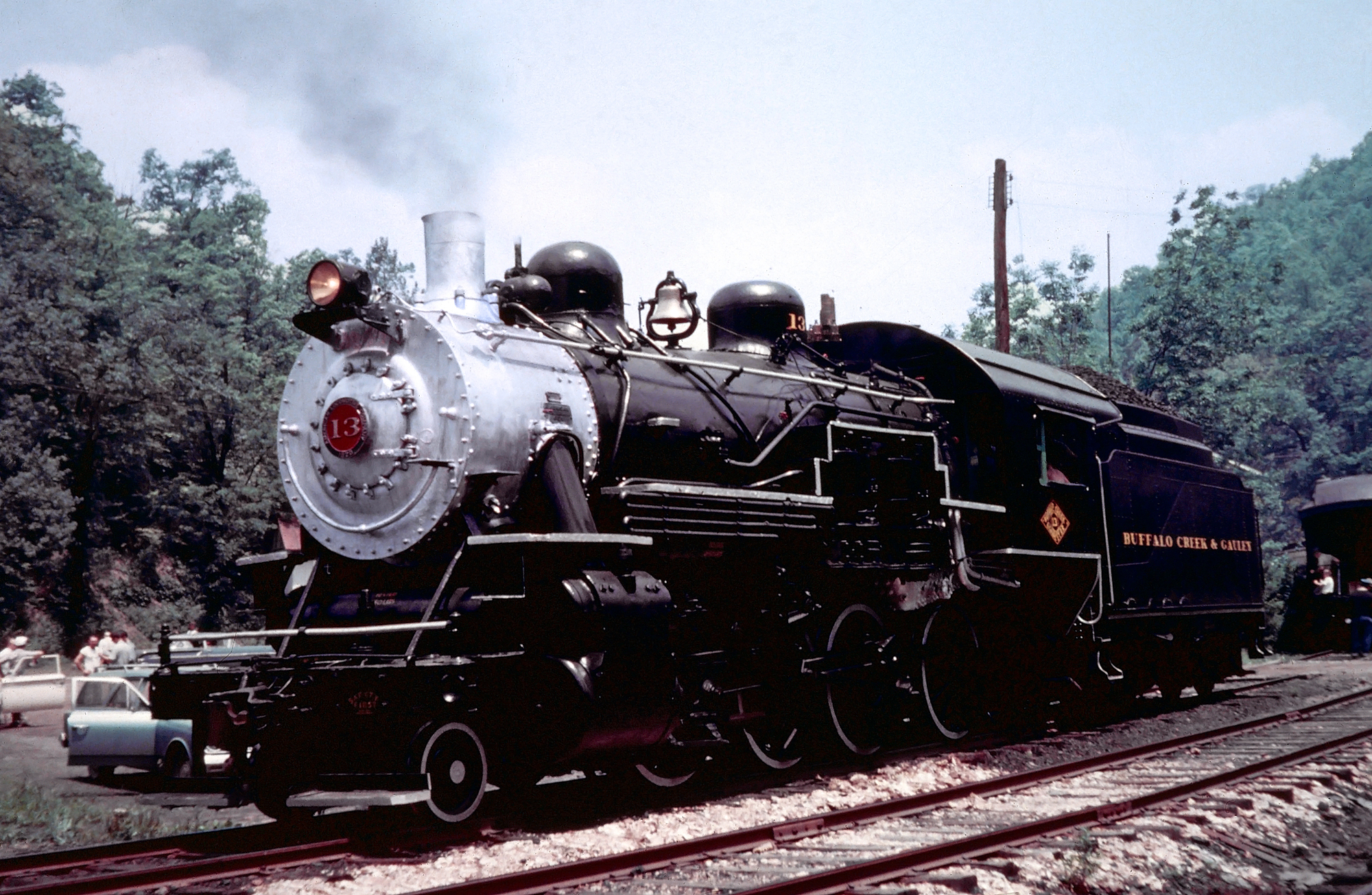 The BC&G, along with the ERC&L's own railroading operations, also owned two Railbuses, Shays, Climaxes, and even early diesel switchers.

In 1958 after mounting losses the ERC&L, including all subsidiary operations like the BC&G, were sold to Clinchfield Coal Company, which subsequently sold the mill to W.M. Ritter Lumber and leased the rail operations to the lumber company.

Unfortunately, things just went downhill from that point. In 1963 Rich Run Mine finished operations and two years later the final load of finished lumber products left Swandale for the B&O interchange at Dundon.  Interestingly, this was not the end of the BC&G. 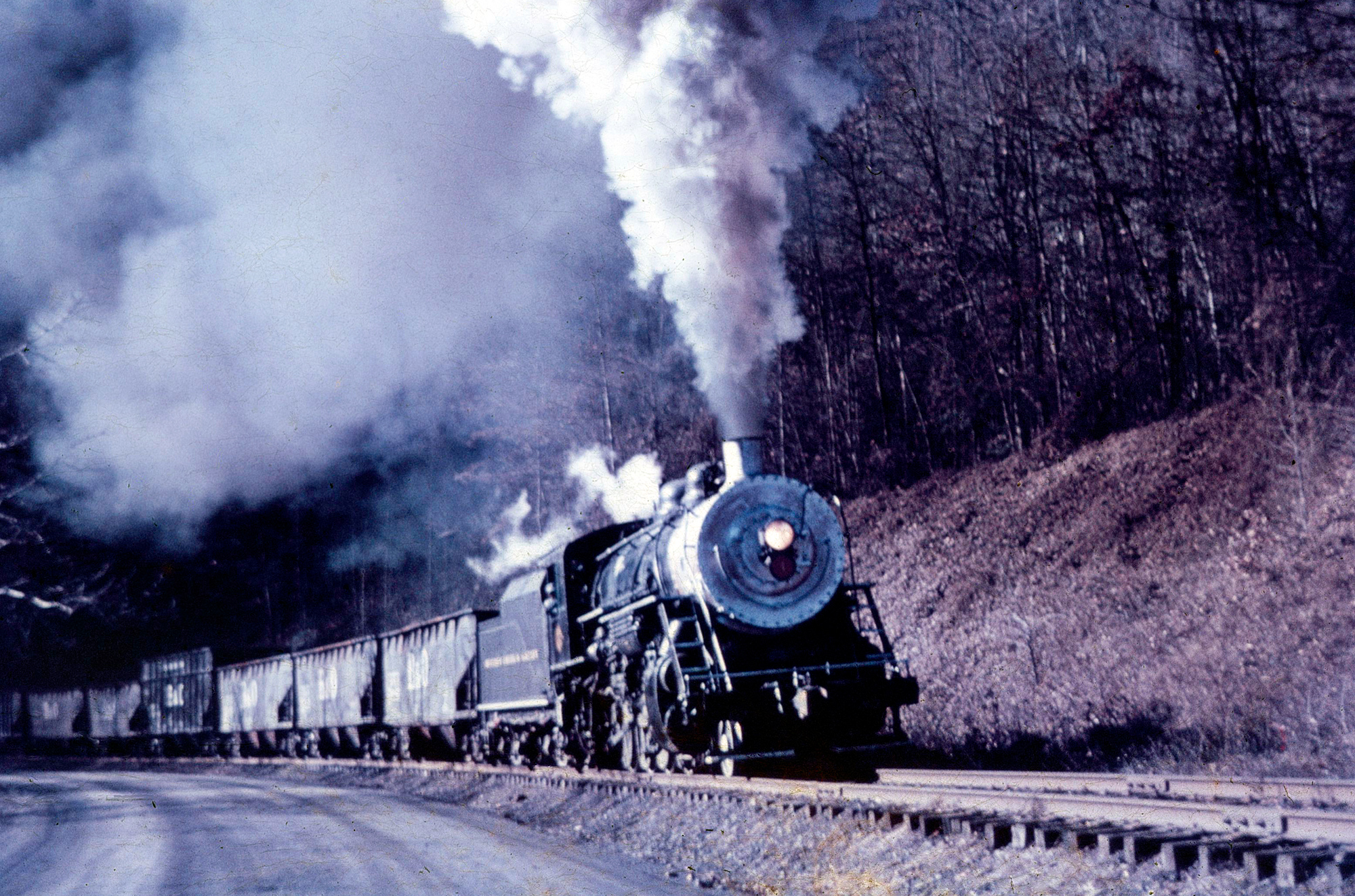 Buffalo Creek & Gauley 2-8-0 #4 pulls a cut of empty hoppers, and even an empty woodchip car, uphill west of Swandale, West Virginia in the fall of 1964. Larry Fellure photo. American-Rails.com collection.

In 1971 the railroad was revived by the Majestic Mining Company and reopened all of the way to Widen to load out a coal mine located near there.

It originally used a 65-ton Whitcomb (#20) for power and later an Alco S-2 (#2). The Majestic Mining operations lasted until 1985 at which the old railroad once again sat dormant. 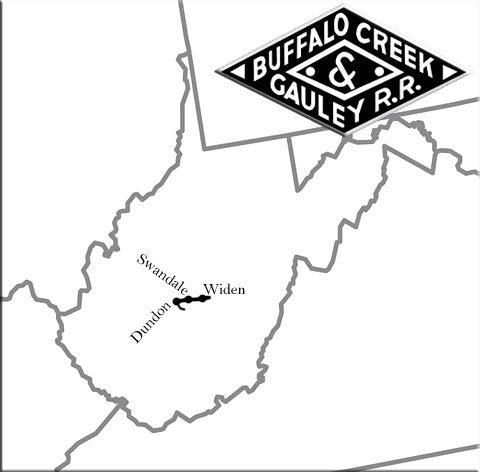 A small map of the Buffalo, Creek & Gauley's route.

The Buffalo Creek & Gauley provided only a very minor listing in the Official Guide. This was the railroad's 1940 listing. Author's collection.

But again fate saw a future for the BC&G and in the early 1990s the Elk River Railroad, Inc. was established to serve a mine at Avoca.

To reach the mine the Elk River Railroad (also known as TERRI) purchased 61 miles of the B&O's former Elk River line (that originally connected Grafton with Charleston) between Gilmer and Hartland. This stretched reached the old B&O/BC&G interchange at Dundon.

TERRI had purchased the entire line to Widen but only refurbished it as far east as needed (to Avoca).

The coal loaded was purchased by American Electric Power (AEP) but nearly as soon as the Elk River Railroad began operations it all came to an end in the late summer of 1999 when AEP decided the coal was too poor in quality for their use. 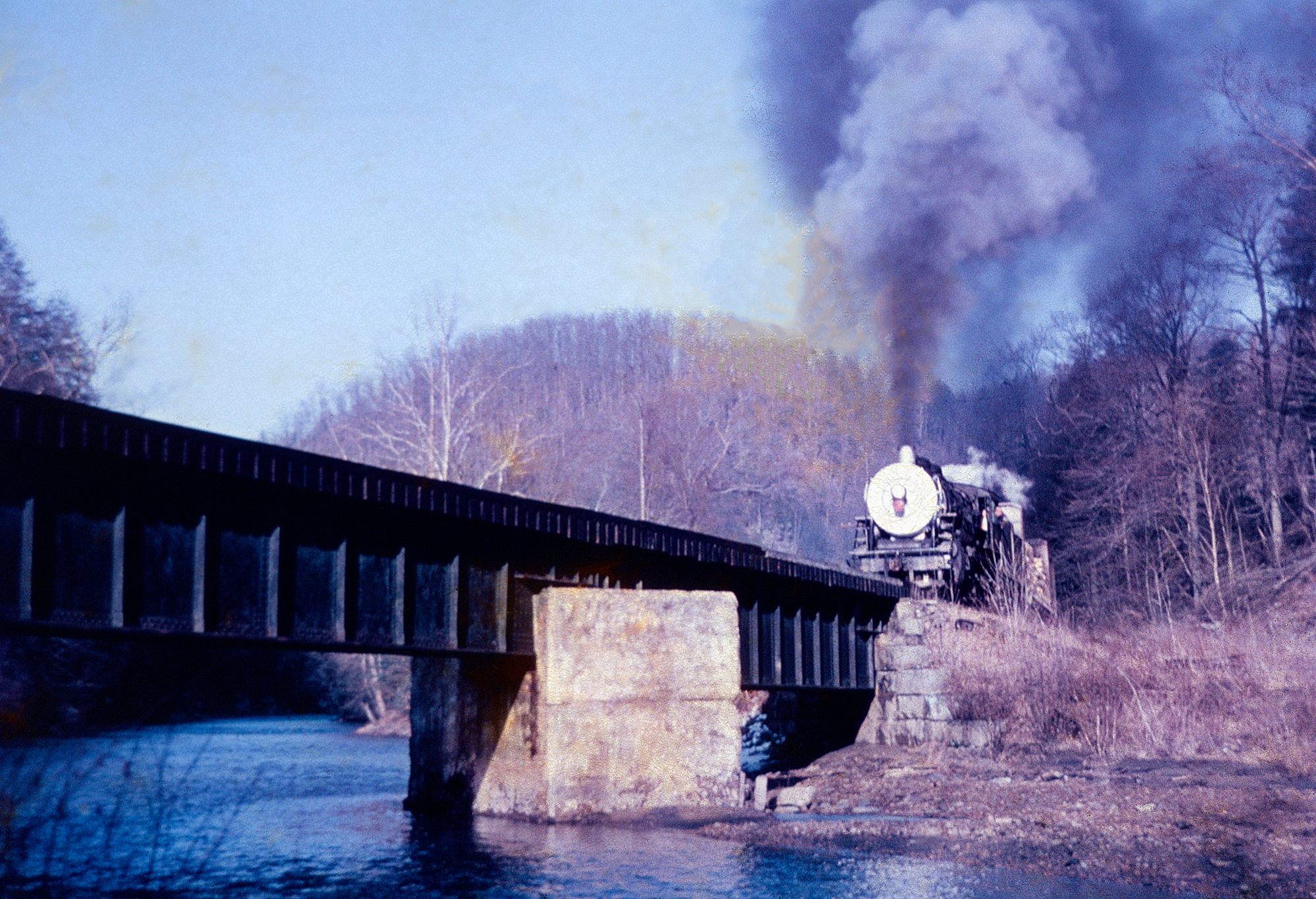 Buffalo Creek & Gauley 2-8-0 #4 is about to cross Sand Fork Trestle on a special photo run-by during the fall of 1964. Larry Fellure photo. American-Rails.com collection.

For years the Elk River Railroad survived by earning minimal revenue storing and refurbishing rail cars for CSX Transportation at its Gassaway yard (also where its former offices were located).

Since the 1999 closing of the Avoca mine speculation swirled of the Elk River resuming operations, including rebuilding the old B&O route all of the way to Charleston.

However, not only did this not occur but into the 2010s the old Coal & Coke was slowly abandoned and removed south of Gassaway.  Then, in March, 2022 the Elk River called it quits with its small fleet of GP units sold to the Durbin & Greenbrier Valley.

Three of BC&G's steam locomotives survive, including 2-8-0 #4 which was purchased new. Currently #4 is under a full restoration by the North Carolina Transportation Museum and to be returned to service sometime in the future.

Sisters #13 and #14 also survive, the former on display in Gaithersburg, Maryland and the latter currently stored at West Lafayette, Ohio. 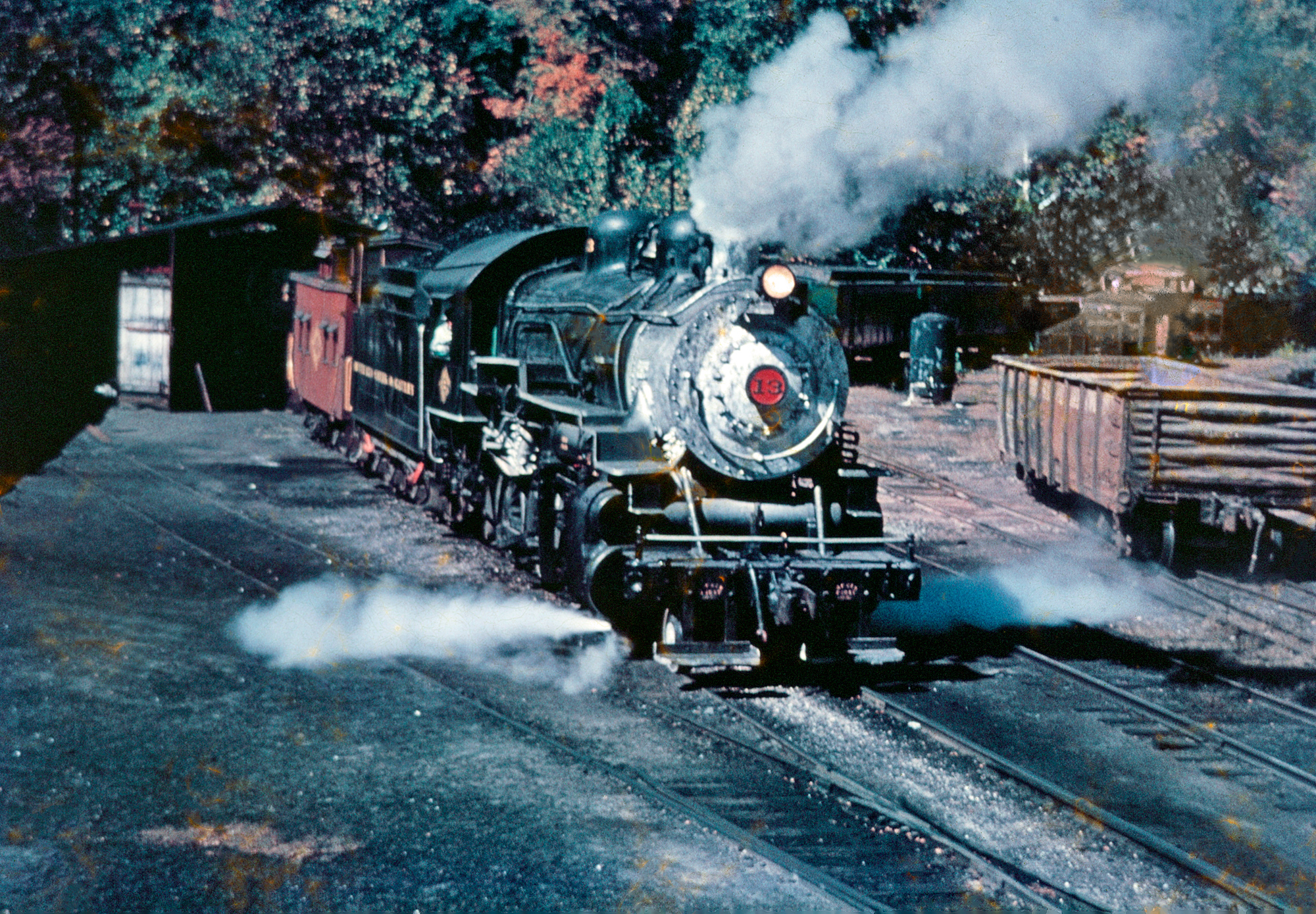 Buffalo Creek & Gauley 2-8-0 #4 clears out its cylinder cocks at the yard in Dundon, West Virginia during the fall of 1964. Larry Fellure photo. American-Rails.com collection.

In 2005 the BC&G again found a new life. That year the Buffalo Creek and Gauley Railroad Co-Operative was formed to refurbish the old railroad and operate a excursion train over the line.

Under the organization's guidance the track was cleared and a new campground and lodge established on the site of the BC&G's old Dundon yard.Along with the campground and lodge the co-op was also able to acquire two cabooses for use in excursion service and a small GE 35-ton locomotive.

The dream was almost entirely self-funded from just a few volunteers although they were able to acquire a grant from the state of West Virginia to help in establishing the tourist line.  Alas, however, the project stalled and quietly disappeared. 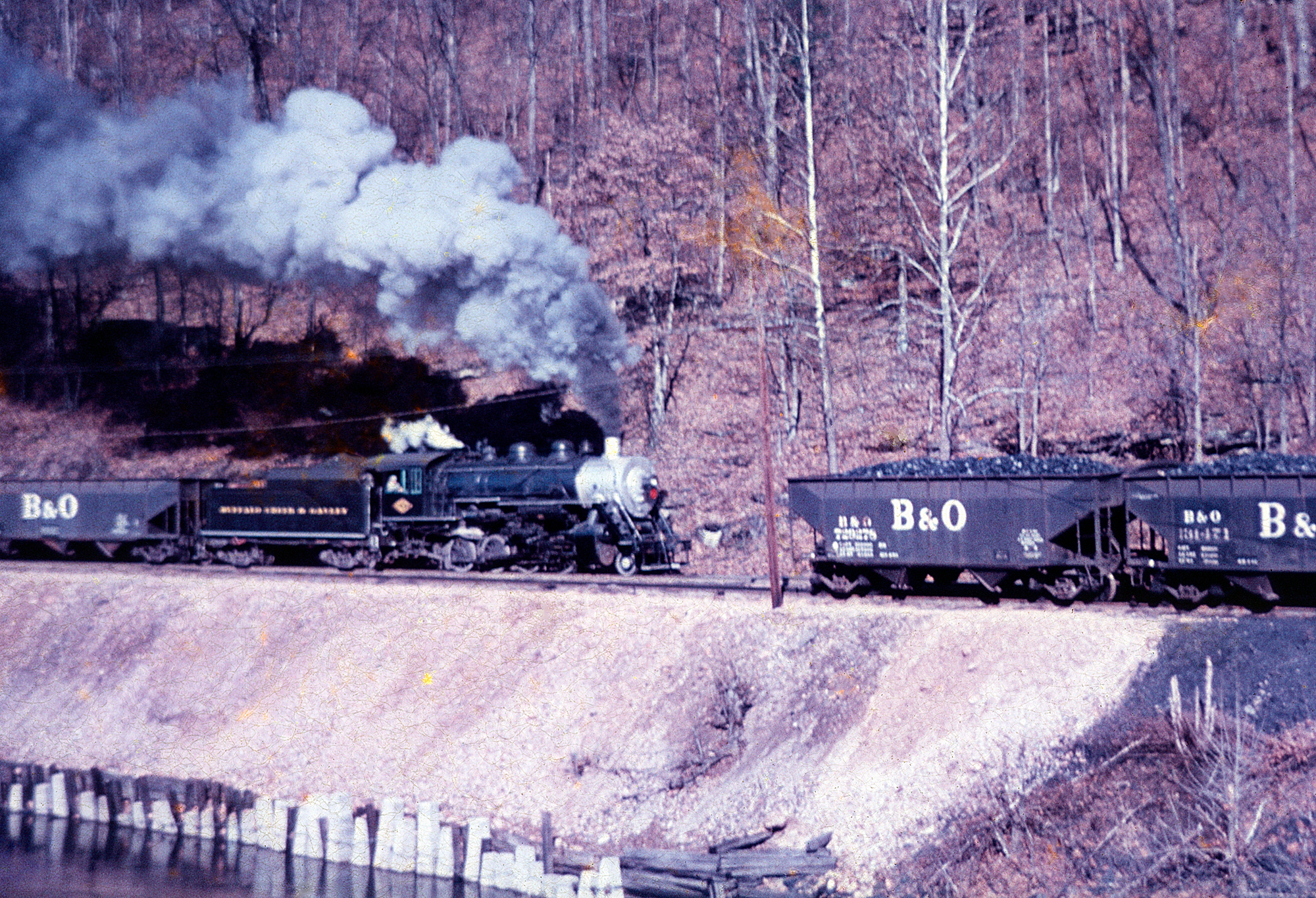 Buffalo Creek & Gauley 2-8-0 #4 pulls a cut of empties from the B&O interchange at Clay Junction, West Virginia during the fall of 1964. Larry Fellure photo. American-Rails.com collection.

On a happier note, though, it appears that at least one part of the old BC&G operation can be seen running again; it was announced during late February of 2015 that the Durbin & Greenbrier Valley, a tourist and freight carrier that predominantly operates in West Virginia, will acquire Consolidation #4 from the North Carolina Transportation Museum.

The locomotive, known by its nickname as "Old Slobberface" for its knack of leaking around its smokebox, has long been on display at the facility in Spencer and will be restored to operation by the D&GV.

It is slated to be returned to service and will likely operate on the former Western Maryland between Cass and Elkins.

Finally, West Virginia has stepped in and acquired the entirety of the old BC&G property with plans to operate the track as either a tourist train host rail bike excursions (it is not entirely clear).

It is interesting the state did not leave the connection in place to the BC&G at Dundon and acquire the old B&O's Coal & Coke Branch from that point to the Appalachian & Ohio connection at Gilmer.  Whatever becomes of the line as a tourist attraction will be an isolated stretch of track.