When the logging industry took root in the Mountain State during the late 19th century many companies constructed railroads or tramways to handle logs for processing, which led to the creation of what would eventually become the Beech Mountain Railroad.

While the little line was originally designed to handle forest products it later transitioned into a coal-hauler, a source of freight that has sustained it to this very day.

Over the years the operation has been mothballed, and then revived, with the fluctuations brought about by the coal industry.

More than once it appeared the railroad's fate was sealed.  Today, the railroad remains active despite a statute that it was slated to close in late December of 2015 following the cessation of operations at the only coal mine it served.

For train enthusiasts this is one of the most remote and out-of-way short lines you can railfan.  The ability to catch the railroad in action is extremely difficult due to its erratic and unpredictable schedule.

It typically requires insider information.  Otherwise, one can wait for days without ever seeing a train.  A big thanks to Loyd Lowry, in addition to Wade Massie, for the photos of this unique little operation. 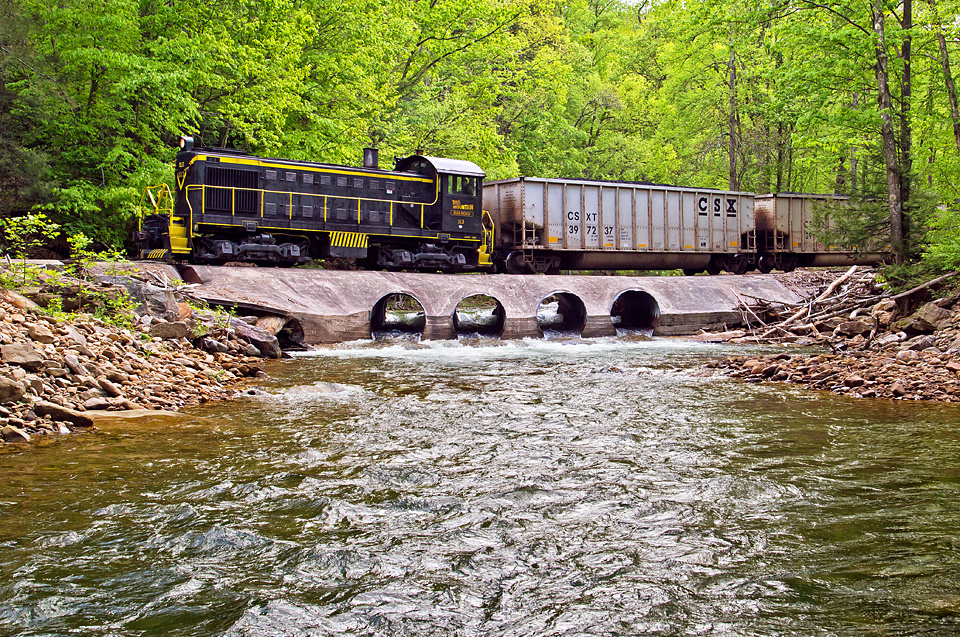 Photographer Loyd Lowry was able to catch the fleeting Beech Mountain in service on May 18, 2014 as S2 #113 pulls loads across the Upper Submarine Bridge at Palace Valley, West Virginia and towards the A&O interchange at Alexander.

The operation began in 1890 when the Alexander Lumber Company constructed a narrow-gauge tramway along the Left Fork of the Buckhannon River in present-day Upshur County, West Virginia.

Unfortunately, the operation wasn't particularly successful at its intended task of moving logs.  As a result it was replaced with a standard-gauge system in 1892 known as the Alexander & Rich Mountain Railroad.

The A&RM worked its way southeasterly along the river and connected with the Baltimore & Ohio's Pickens Branch at Alexander.  In a move that was quite common within the logging industry the operation changed hands several times. 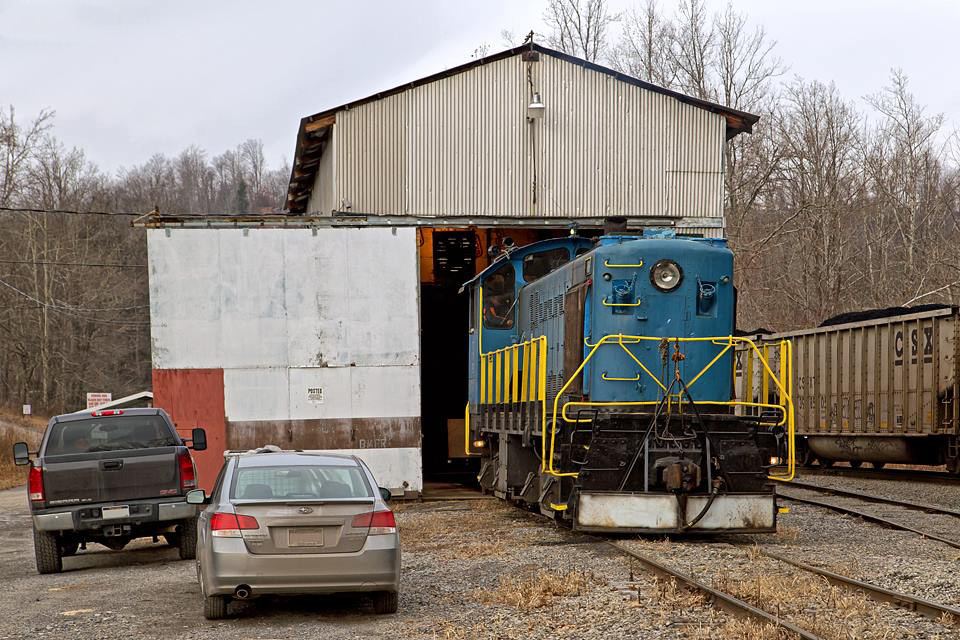 Beech Mountain Railroad S4 #115 is put away at the engine house in Alexander after moving its last load of 25 cars from Star Bridge to the interchange on December 21, 2014. Loyd Lowry photo.

In 1900 the A&RM was sold to the Randolph Coal & Lumber Company, which re-chartered the system as the Alexander & Rich Mountain Railway.

During December of 1906 another name change occurred as the Alexander & Eastern Railroad.  While some coal was transported during this time timber still remained the dominant freight.

In some cases, there were no bridges at all as steam locomotives simply forded the river, an operation which loggers later realized was not possible with diesels (a few inches of water will short-out the locomotives' electric traction motors).

The size of the A&E ebbed and flowed as rails were laid to reach new stands of timber and then pulled up as tracts played out. 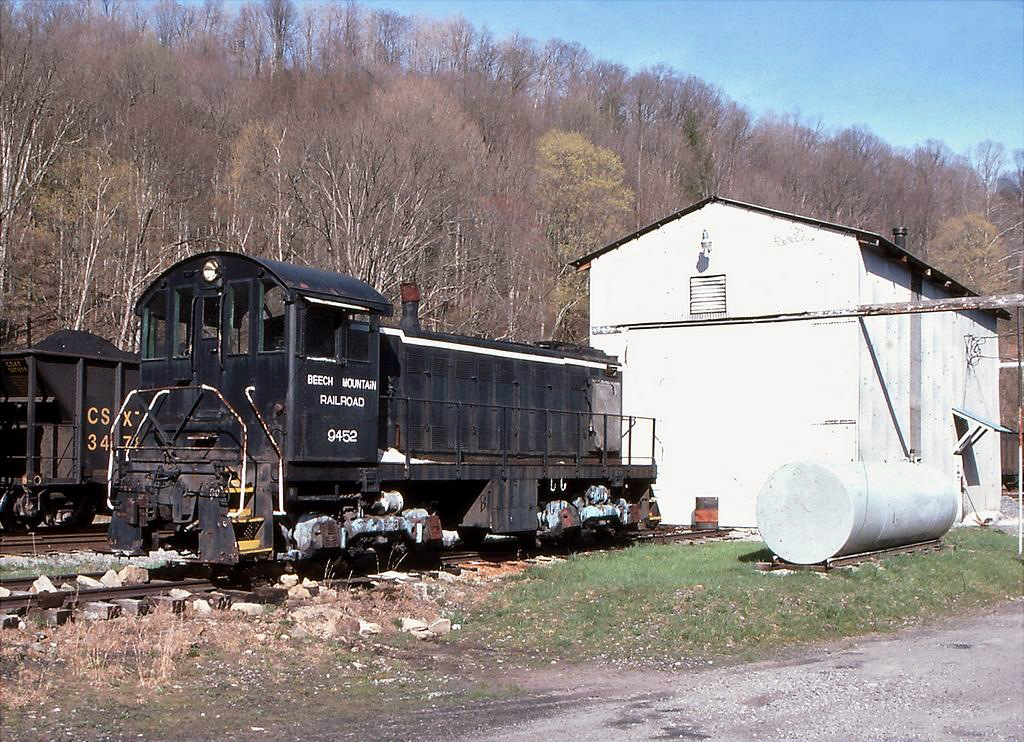 According to Alan Byer's article, "Submarine Railroad In West Virginia," from the September, 2012 issue of Trains Magazine the movement of logs persisted until owner F.C. Cook & Company elected to discontinue rail operations in 1940 and use the right-of-way as a standard roadway for trucks.

Unfortunately, the idea proved less than satisfactory as the flood-prone Left Fork made the entire operation a muddy, impassable mess.

During World War II the final sawmill was closed at Alexander and the former right-of-way later purchased by E.L. Claghorn in 1953.

He was a developer from Pennsylvania and looked to use the corridor for an entirely different purpose, the movement of coal taken from seams located near the small town of Helvetia. 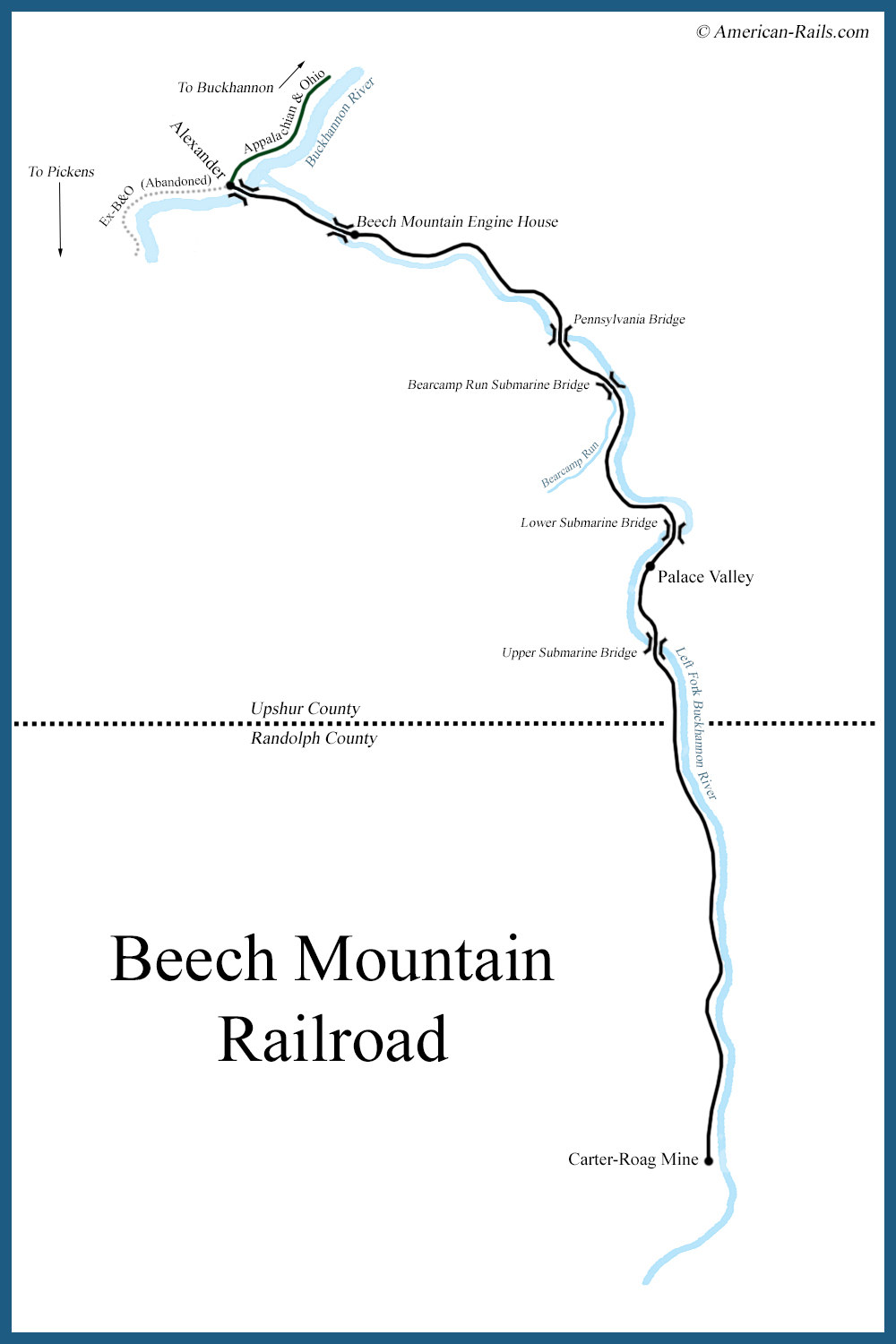 The newly incorporated Beech Mountain Railroad was formed and rails re-laid (to much heavier standards than before) from the B&O interchange at Alexander to a point south of Star Bridge known as Beech Run Junction in Randolph County, a distance of 10 miles.

The railroad would go on to own several switchers.  They include: 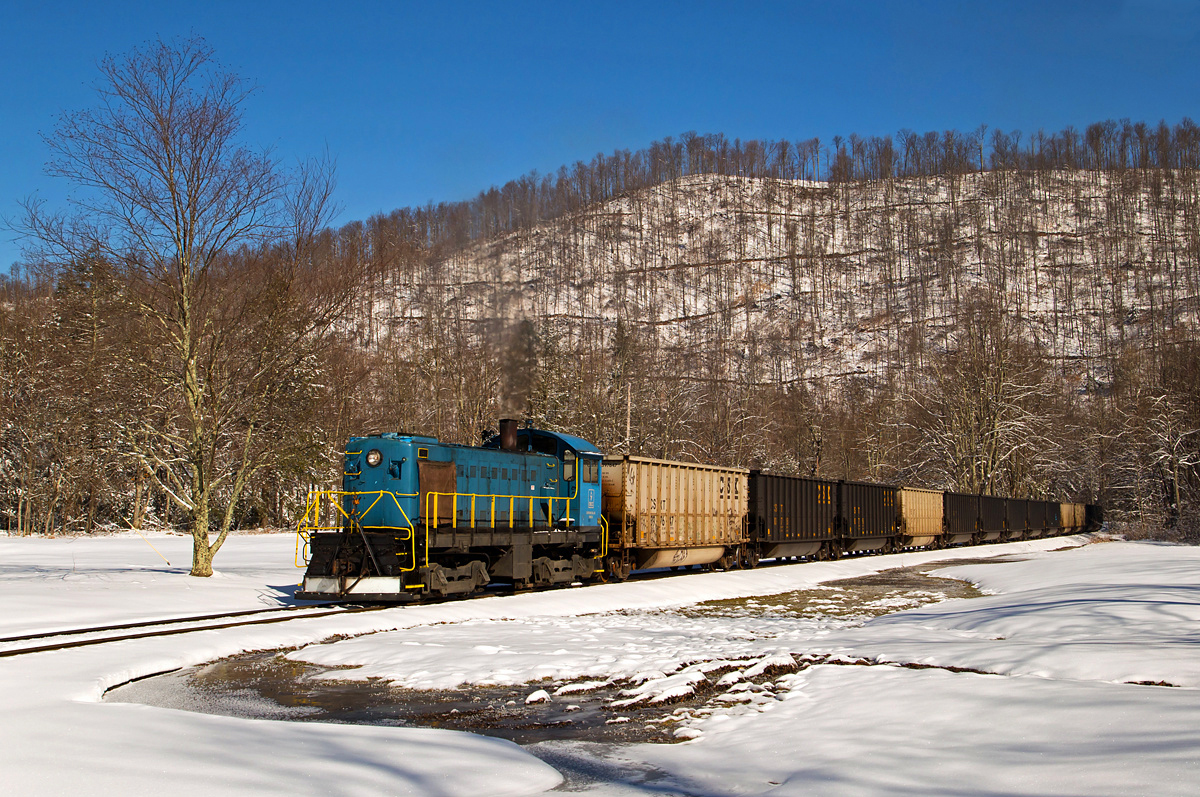 Beech Mountain #115 is nearly dwarfed by its cut of hoppers as the little switcher heads back to the mine with empties near Palace Valley on March 7, 2015. Loyd Lowry photo.

Over the years the Beech Mountain has seen service disrupted as mines closed and the railroad wasn't needed.

It saw a recent 7-year hiatus from 1998 until 2005 when service was reopened by the Carter-Roag Coal Company on February 14th that year.

However, only the 8 miles to Star Bridge are currently in use and the remaining 2 miles to Beech Run Junction remains abandoned.

According to Mr. Byers' article the railroad usually operates six to eight times per month using S2 "Old 113" on the main line while S4 "Bear's Blue Ox" shuttles hoppers at the load-out site.  Recently, however, the locomotives have switched roles due to mechanical issues with #113.

The railroad's most interesting feature are the series of so-called "submarine bridges" it has custom-built, and subsequently modified over the years, to deal with the turbulent nature of the Left Fork.

The bridges received their name via the way they are designed, allowing flood waters to rush over top without destroying the track or other infrastructure.

Essentially, it works by encasing several culverts within an elevated embankment of concrete.  The track is either placed within the concrete or situated on top.

The railroad first experimented with the idea dating back to the 1940s and has perfected it several times since.  Usually, the bridges work quite well but on occasion the river still defeats the best laid plans and undermines the right-of-way. 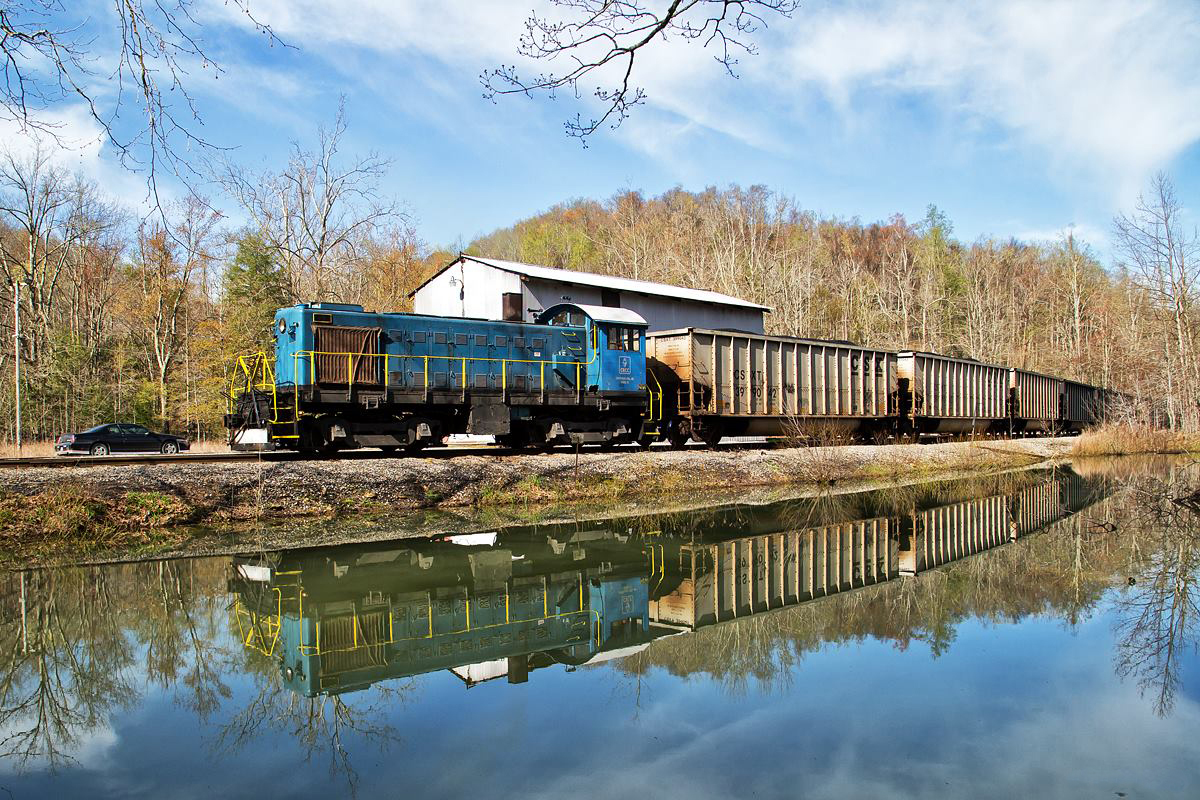 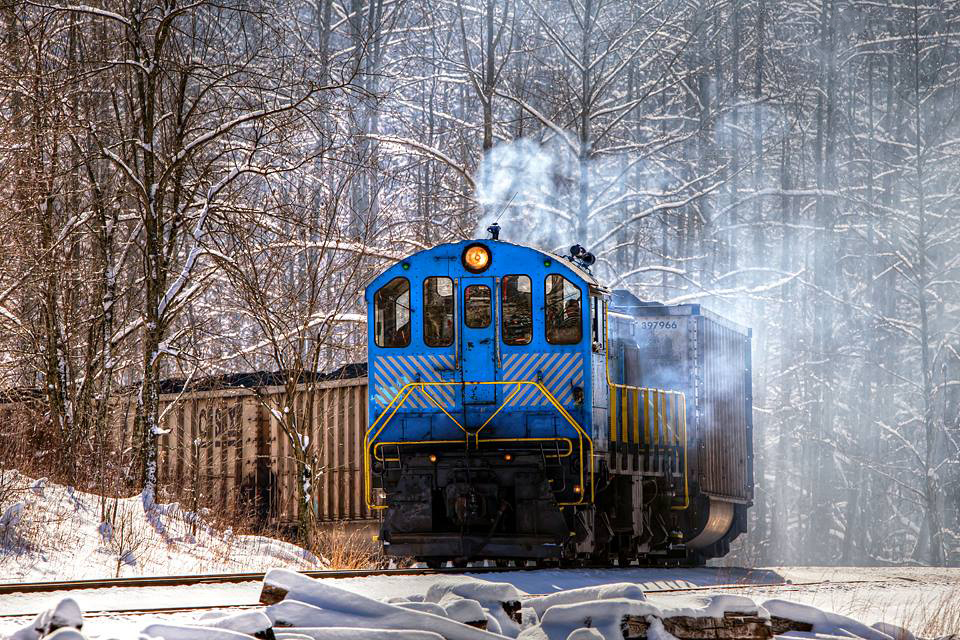 Beech Mountain #115 pulls a cut of loads towards the interchange with the Appalachian & Ohio at Alexander on March 7, 2015. Loyd Lowry photo. 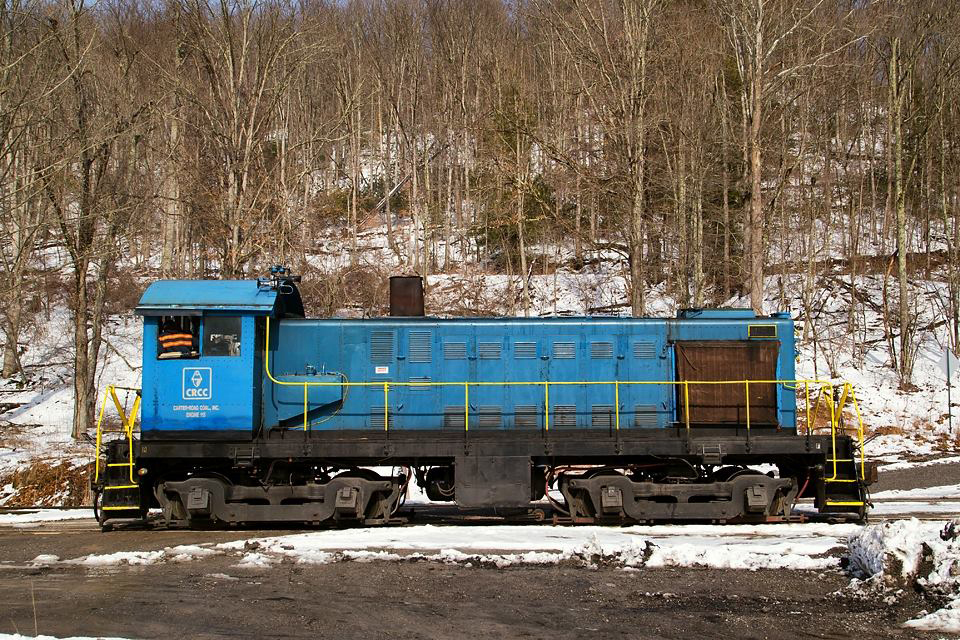 Beech Mountain #115 sits next to the road's small, single-engine shop complex located near the hamlet of Alexander on March 7, 2015. Loyd Lowry photo.

Today, the interchange at Alexander is no longer with the B&O but short line Appalachian & Ohio, which handles loads and empties back to Grafton where they are picked up by CSX.

Unfortunately, it appears the future of the Beech Mountain is again in doubt as the Carter-Roag announced in October of 2015 it will close its mine at Mill Creek on December 25th. 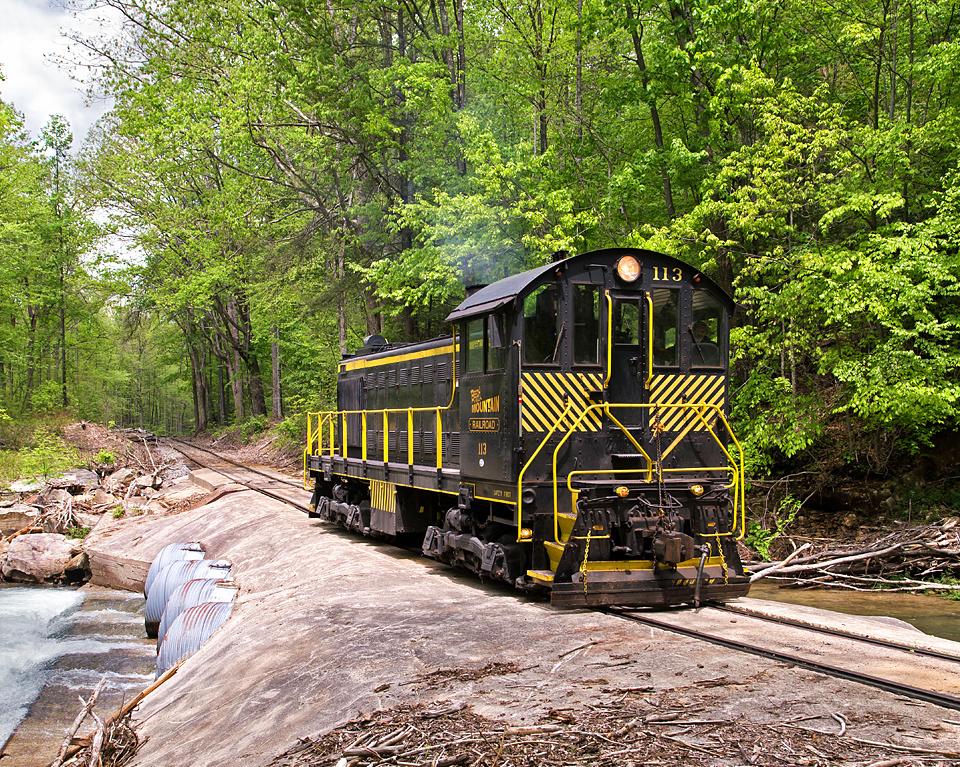 Another view of "Old 113" running light across the Upper Submarine Bridge as it heads back to the mine at Star Bridge for more loads. Loyd Lowry photo.

The closure will result in the loss of 170 jobs and also affect the Appalachian & Ohio, which depends on coal shipments for the majority of its traffic.

Despite this statement, operations are currently still ongoing both at the mine and railroad although for how much longer is anyone's guess.

The future of Appalachian coal across the Mountain State currently appears to be in serious jeopardy, and not only as it relates to the Beech Mountain Railroad.