The Birmingham Special was often regarded as one of Southern's more notable trains (although never streamlined), providing first-class accommodations from the nation's capital to Birmingham, Alabama (first via Atlanta and then later Chattanooga in conjunction with the Norfolk & Western).

The train also offered connecting service to New York via the Pennsylvania and passengers could also book sleepers through to other points in the south, a common practice on the Southern thanks to its numerous friendly connections with other lines.

The train's history dates to the early 20th century and it survived as a named train until early 1970 while a nameless remnant remained on the timetable for a few years following.

The Southern Railway was officially created in 1894 through the merger of the Richmond & Danville and East Tennessee, Virginia & Georgia railroads.  However, the system continued to grow throughout the 20th century.

In actuality the railroad was a massive amalgamation of numerous smaller systems spread all across the South, which were united under the Southern banner.

According to Mike Schafer's, "More Classic American Railroads," this number totaled 125!  From a historical perspective it's interesting to note that many of these lines remained subsidiaries for years and, amazingly, even today some remain part of the Norfolk Southern corporate structure.

The Southern gained entry into Birmingham with its control of the Alabama Great Southern during the 1890s and established passenger service to the city soon after.

The original Birmingham Special was inaugurated on May 16, 1909 between Washington, D.C. and Birmingham via Atlanta with connections to New York City through the PRR.

From the beginning the train (#17 southbound and #18 northbound) provided Pullman sleepers, a diner, and parlors all of which also operated through to the Big Apple.

During the steam era one of the Southern's handsome Pacifics, Mountains, or Mikados was normal power on the Special, clad in the railroad's stunning Virginia Green and gold trim after the 1920s.

Within the next two decades streamliners had finally arrived on the Southern's premier Crescent, Southerner, and Tennessean although the Special's consist had not changed considerably save for a slightly different routing. 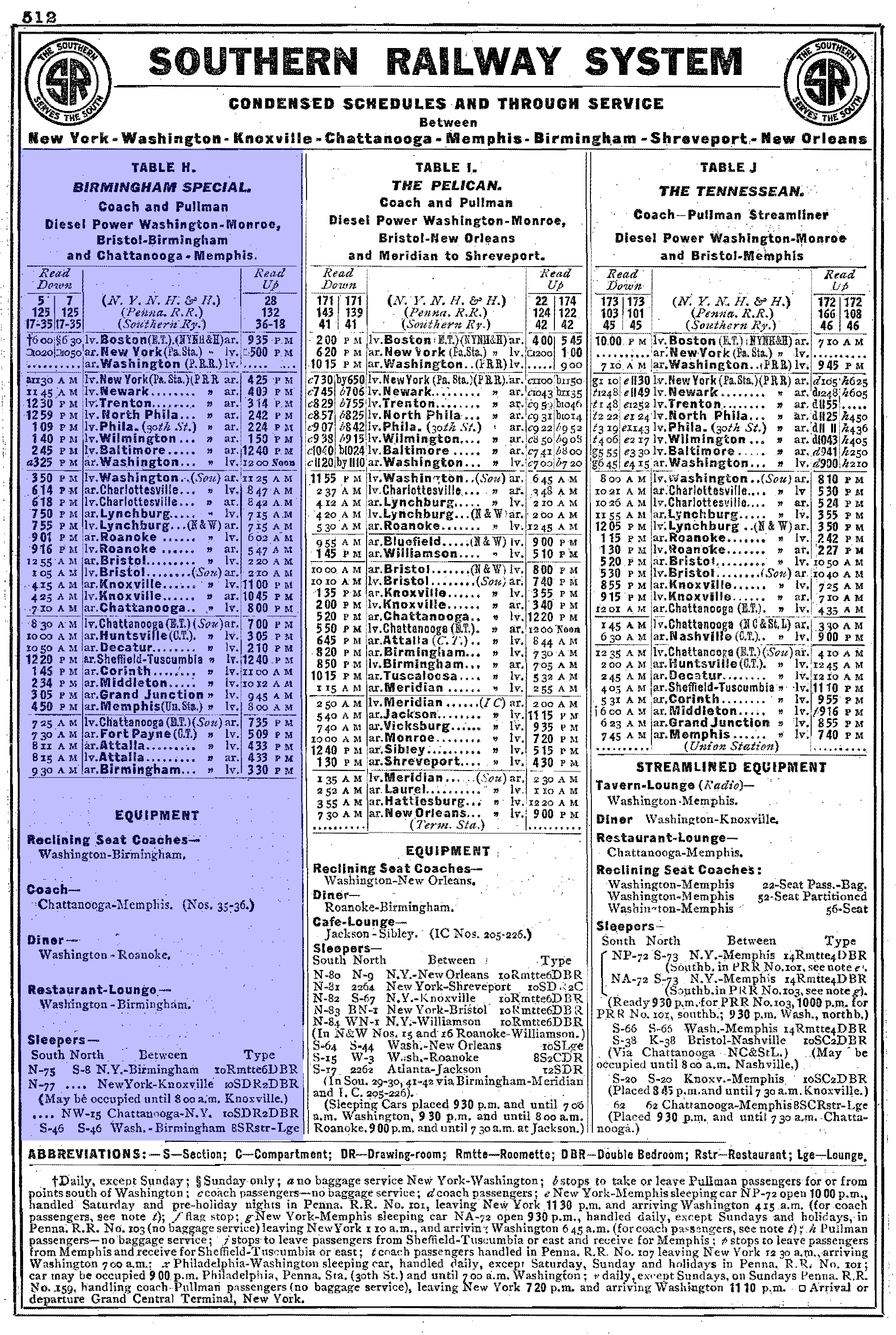 Beginning in May of 1932 the railroad began working with the Norfolk & Western to offer a faster scheduling.

Instead of trains heading to Alabama and New Orleans via Atlanta they used the N&W main line between Lynchburg, Virginia and Bristol, Tennessee where a connection was reestablished with the Southern's network.

Diesel power arrived on the Special during the 1940s in the form of Electro-Motive E6s, and later upgraded to E7s, FP7s, and E8s as those locomotives began arriving a few years later.

The ever-financially responsible Southern did not throw considerable resources at the streamliner movement, unconvinced that it was a worthwhile endeavor.

The railroad would eventually upgrade its more notable trains mentioned above with lightweight equipment although they essentially comprised the extent of this effort.

This move proved successful for those trains but the railroad stayed on the conservative side and used other methods to attract patronage on its other trains including the Birmingham Special such as courteous service, fine dining, air-conditioning, and reclining seat coaches.

The Southern's conservatism proved well-warranted in the end as the public left the rails in great numbers after World War II, drawn to the individualism of the automobile (thanks in part to the new Interstate highways) and lightening fast air/jetliners.

The first major cutbacks of the Special began during October of 1956 when through cars north of Washington were discontinued, a move spurred by the Pennsylvania.

The Special's name was dropped altogether after February 1, 1970 although it continued to run nameless for a few years following.

According to Ron Flanary a typical consist during its final years as a through run included "...five baggage cars, a baggage-dorm, three coaches and office car Southern #10 (ten cars total)."

After the last day of privately operated passenger trains, April 31, 1971, the N&W through service (Lynchburg-Bristol) was dropped leaving only the truncated Washington-Lynchburg segment remaining.

The Southern, which opted out of Amtrak, continued serving this route as trains #7 and #8, operating as a mixed train with piggyback/TOFC freight cars until June 1, 1975 when this interesting practice was ended.

The Birmingham Special does have a notable place in history (although the train is never actually mentioned); it was the inspiration for the big band song Chattanooga Choo Choo written by Mack Gordon and Harry Warren that was featured in the movie Sun Valley Serenade in 1941.