The Birney Safety Car, also well known by its much simpler name as simply Birneys, proved to be an extremely successful streetcar design due to their relative good reliability, cheap price tag, and low maintenance costs.

In some ways, Birneys built around World War I and through the 1920s, were the forerunner to the later Presidents' Conference Committee Streetcars (PCCs) of the 1930s.

Both of these cars were a serious attempt to curb the growing rise of automobiles and other forms of transportation.

Thousands of the cars were constructed, most of which by a subsidiary of the J.G. Brill Company. While the car was later designed with a two truck setup the single truck model always proved to be the most successful.

Unfortunately, the car's notable traits proved to be its undoing, as its lightweight resulted in a poor ride especially as track conditions deteriorated. Today, numerous Birneys are preserved around the country, several of which are still operational. 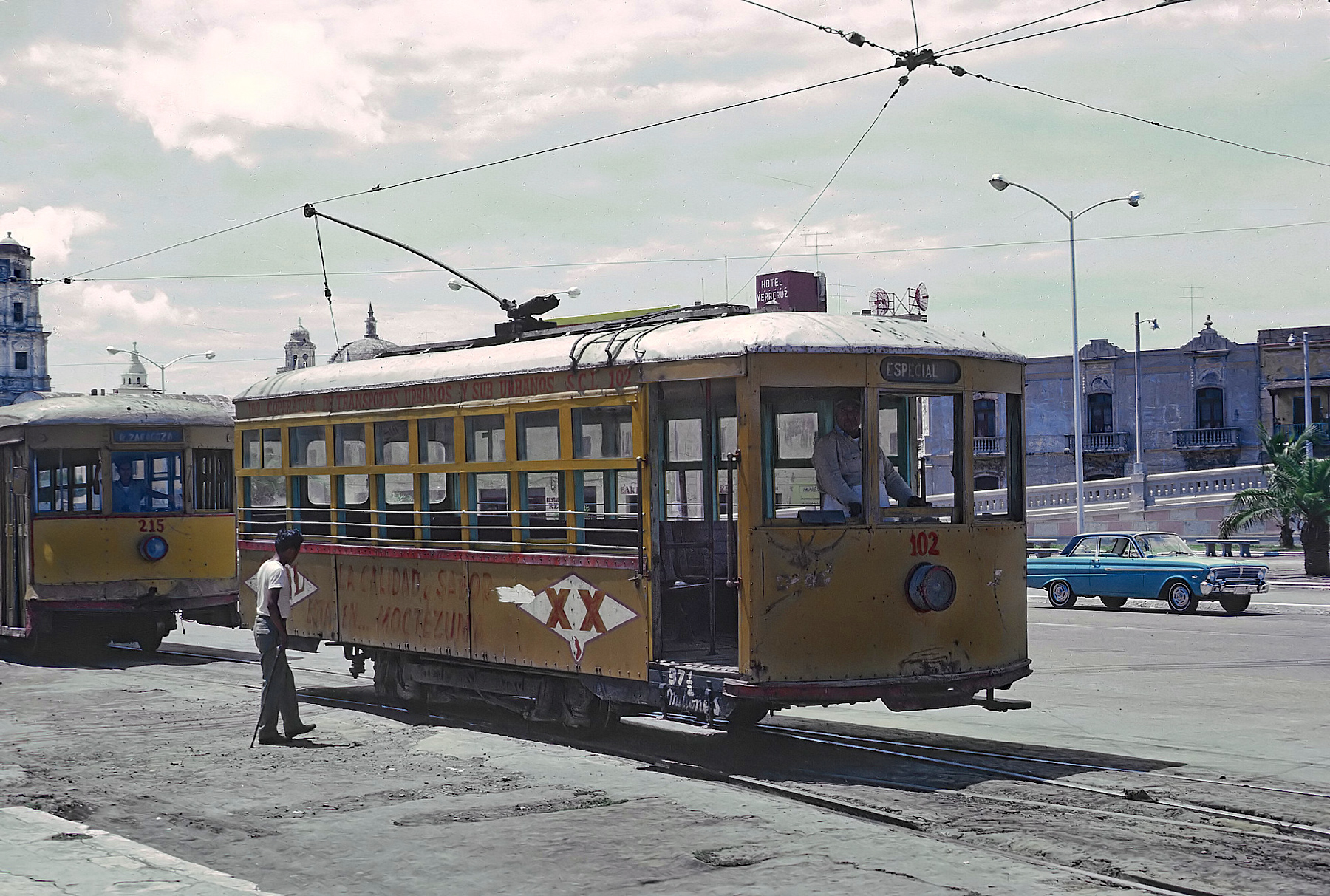 Cooperativa de Transportes Urbanos Y Suburbanos (TUS) single-truck Birney #21 is seen here in service in Veracruz, Mexico on September 12, 1966. These cars were quite popular thanks to their reliability and low costs. As a result, many were purchased for streetcar systems outside the United States. Roger Puta photo.

The Birney Safety Car was a joint effort between Charles O. Birney and Joseph M. Bosenbury. Both men began working on the idea of a new, single-truck electrically powered streetcar after 1910 and first applied for a patent of the design by 1915.

However, it was not until between 1917 and 1919 that they actually began receiving their requested patents for the car. Overall, it is difficult to say which man (if either) offered more contribution to the car although Birney is often historically credited with a greater share.

This was predominantly due to the fact that he was an engineer for the firm Stone & Webster (which is still in business today), a company that even at the time held numerous designs patents related to the railroad industry.

Just before 1920 production of the Birneys began and could not come at a more important time as the automobile was giving interurbans and street railways serious competition.

As with the later PCC design, most buyers of Birneys turned out to be street lines although some interurbans did purchase it as well.

The design was simple, inexpensive to operate, and small, suiting the needs of both street railways and interurbans with street service.

It once again featured the single-truck car design (the single truck dated back to the 19th century but the Birney offered a much more stable design) and was about 28-feet in length capable of holding just over 30 passengers.

The car featured dual motors giving it quick acceleration and because of its small size could be operated by a single motorman. 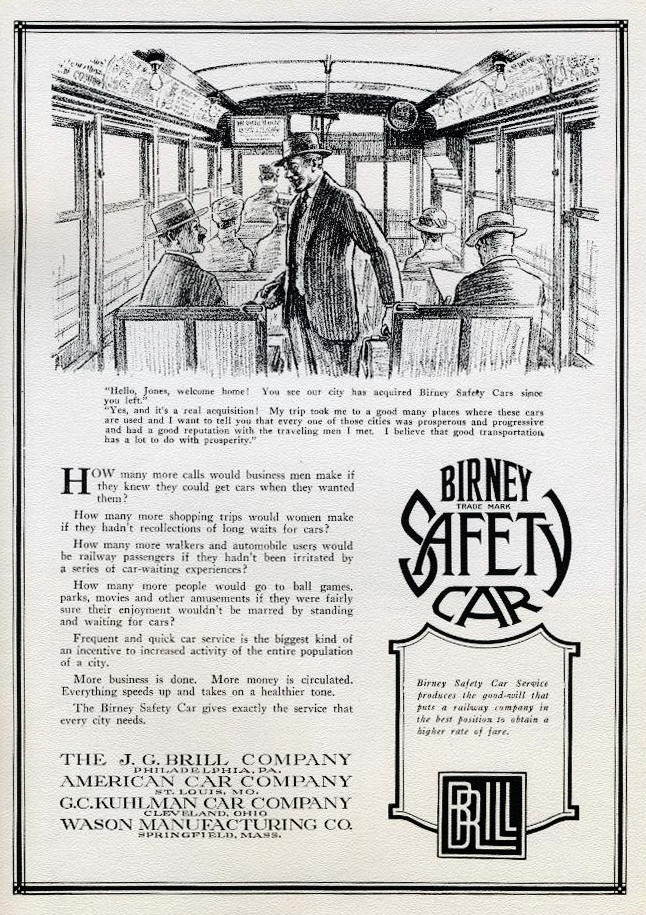 Another reason for the success of the Birney Safety Car was due to its builder. While the American Car Company technically built Birneys it was owned by the J.G. Brill Company the largest interurban and streetcar builder in the country (Brill was not the only builder of Birneys although it did produce the vast majority of them).

Through its publicity word about the new design got out the public giving it the much needed exposure for sales to take off.

For instance, one of its major advertising pieces clearly demonstrated the usefulness of the car with a short description of all of the benefits that it provided such as:

"Birney Safety Car service produces a good-will that puts a railway company in the best position to obtain a higher rate of return." 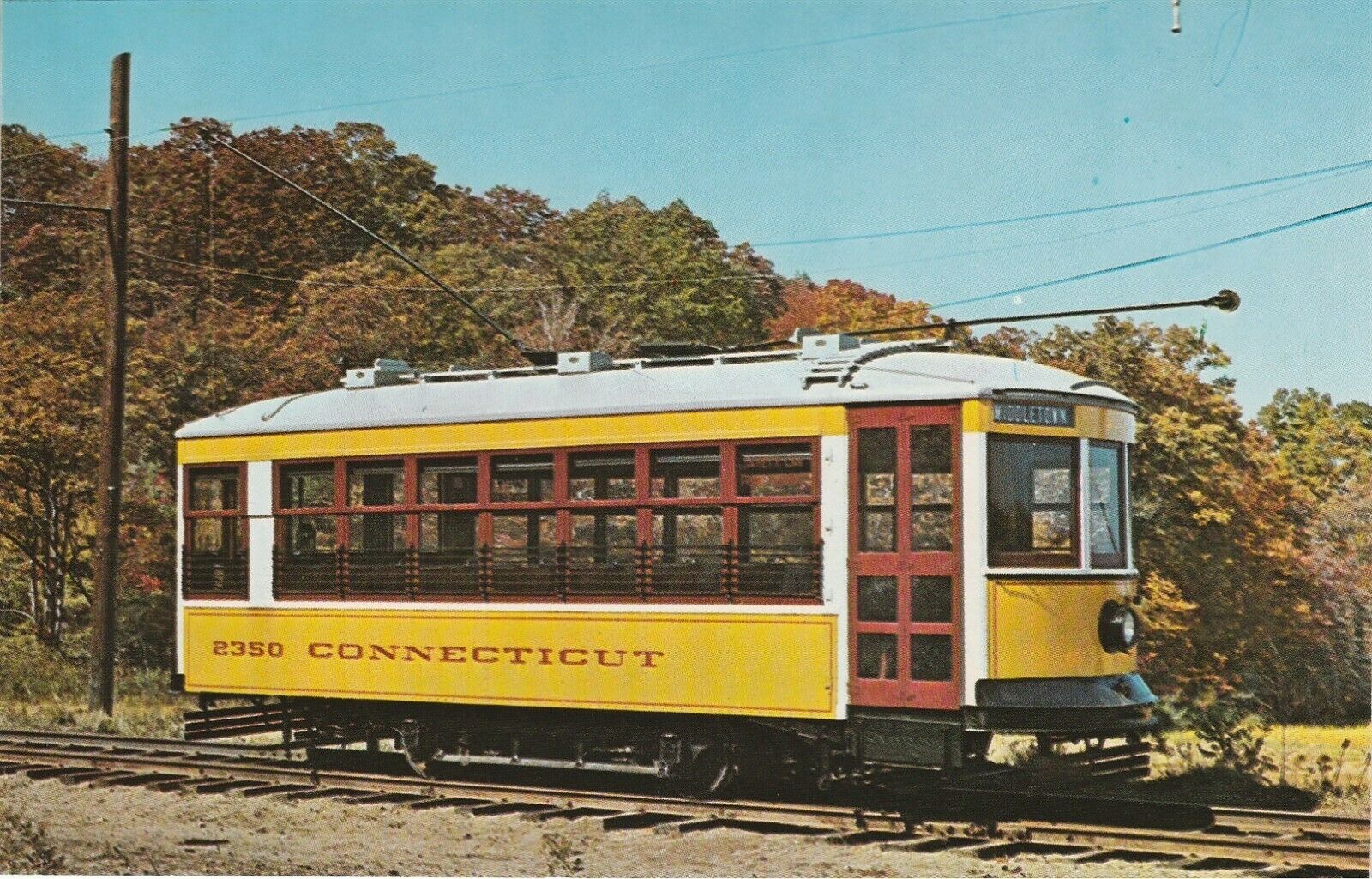 Shore Line Trolley Museum's (East Haven, Connecticut) restored single-truck Birney, #2350, is seen here in a postcard. This car was originally built by the Osgood-Bradley Car Company in 1922 for use by the Connecticut Company in Middletown, Connecticut along its Hartford Division.

Unfortunately, the car's successful traits led to its downfall. Featuring only one-truck the Birney was prone to sliding off the tracks and its lightweight resulted in a rough ride, which only worsened as track conditions deteriorated (a result of many lines simply being unable to afford maintenance improvements).

Additionally, it was not very suitable to winter weather conditions and could get stuck in any type of moderate snow. By 1930 production of the car had ended altogether across the industry. By this time, more than 6,000 examples of the single-truck Birney had been built. 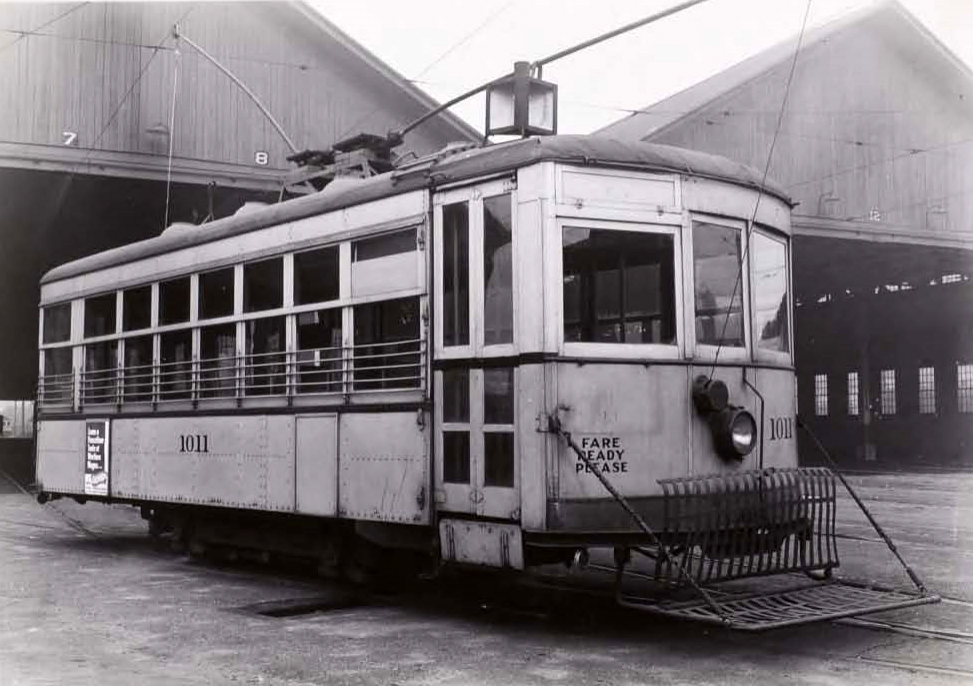 Use of the Birneys declined through the 1930s and 1940s as equipment both became worn out and newer models were available (the car began to be retired in much larger numbers after the Presidents' Conference Committee Streetcars or PCCs entered service in 1936).

However, there were so many Birneys built that naturally, several remain preserved today. And, thanks to the simplicity of the design and ease of maintenance a number of the cars have been returned to operational use around the country.

Today, you can find the car in operation at the Western Railway Museum, Fort Smith Trolley Museum, McKinney Avenue Transit Authority (Dallas), and the Tampa & Ybor City Street Railway Society among others.

You can also find the car in operation at the Nelson Electric Tramway in Canada as well as in Australia and New Zealand.   For more information about Birneys please click here.