When Amtrak first began operations on May 1, 1971 it had to sift out a useful, and relatively efficient, network from the hundreds of former trains operated by the private industry one of which would become the Blue Ridge.

In the east this was particularly difficult with several large cities very close together. However, the carrier worked with a tight budget and thus had to choose only those connections it thought would produce the highest ridership.

Interestingly, in the early 1970s it began testing several trains between Baltimore/Washington, D.C. and Cincinnati along a lightly populated corridor through western Maryland, northern West Virginia, and southern Ohio.

The Blue Ridge operated on the eastern section of this route along the former Baltimore & Ohio main line. It was meant as more of a regional commuter train connecting the metropolitan area with the major B&O terminal at Cumberland, Maryland. 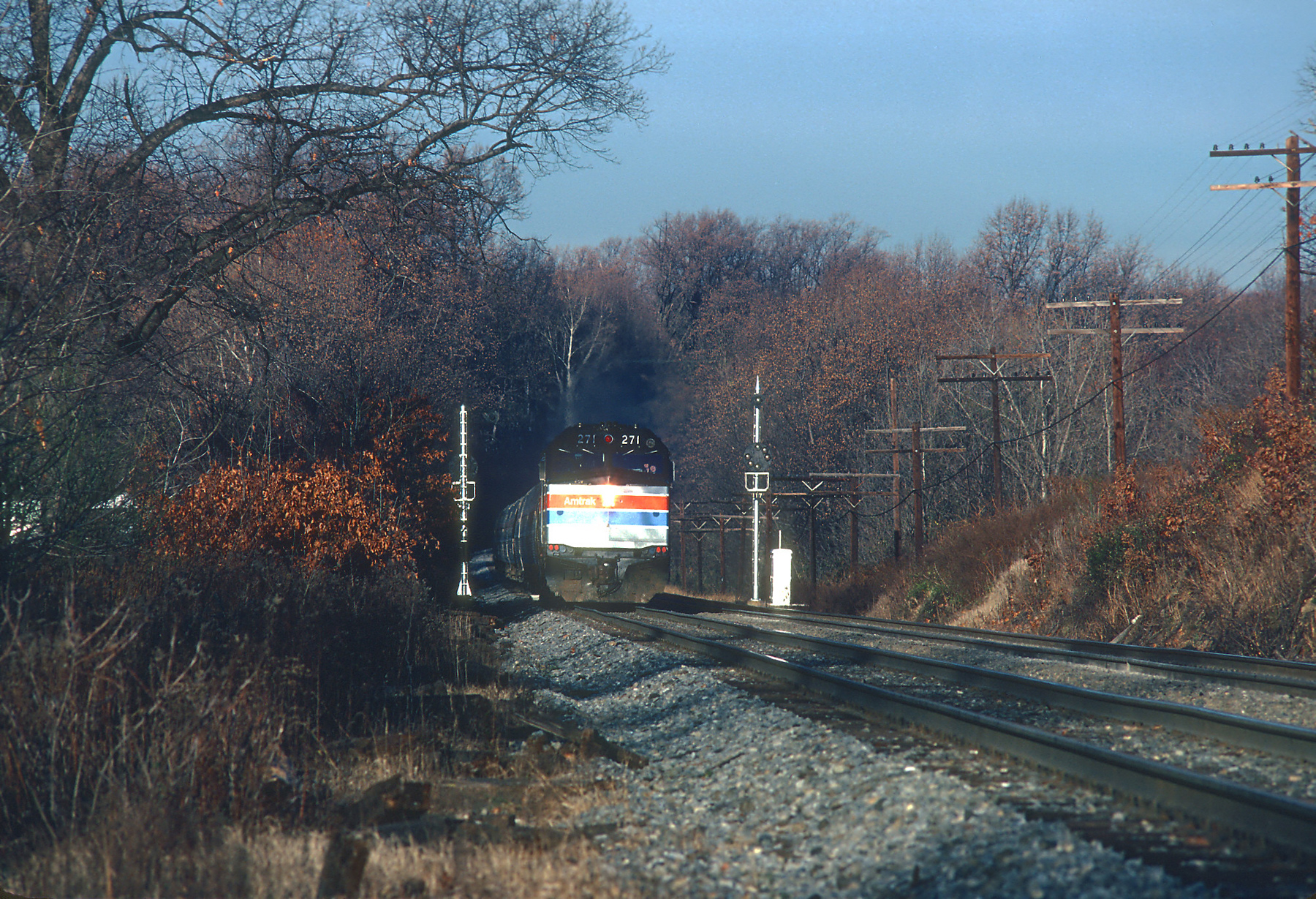 It began service in September, 1971 just a little over four months after the carrier began and connected Washington, D.C. and Parkersburg.

This routing was somewhat surprising for a number of reasons:

Of course, the train did have a bit of backing from powerful West Virginian congressman Harley Staggers who did not want to see his state left out from having Amtrak service (he would also help push to see a southern train serving the state as well, which became today's Cardinal).

It was not long before Amtrak began to realize what the B&O had known for years, this lightly populated corridor simply could not produce high ridership.

After less than a year of service the train received new equipment in the way of Amtrak's UAC TurboTrain and renamed as the Potomac Turbo.

The TurboTrain was designed as a high speed trainset in the 1960s by the United Aircraft Corporation as the latest in streamliner technology to lure the public back to the rails.

While the trainset had design flaws that were never able to be corrected many found it curious that Amtrak chose to utilize the TurboTrain on a routing that would place strict limitations on its operating speeds because of the stiff grades and sharp curves found across the Mountain State. 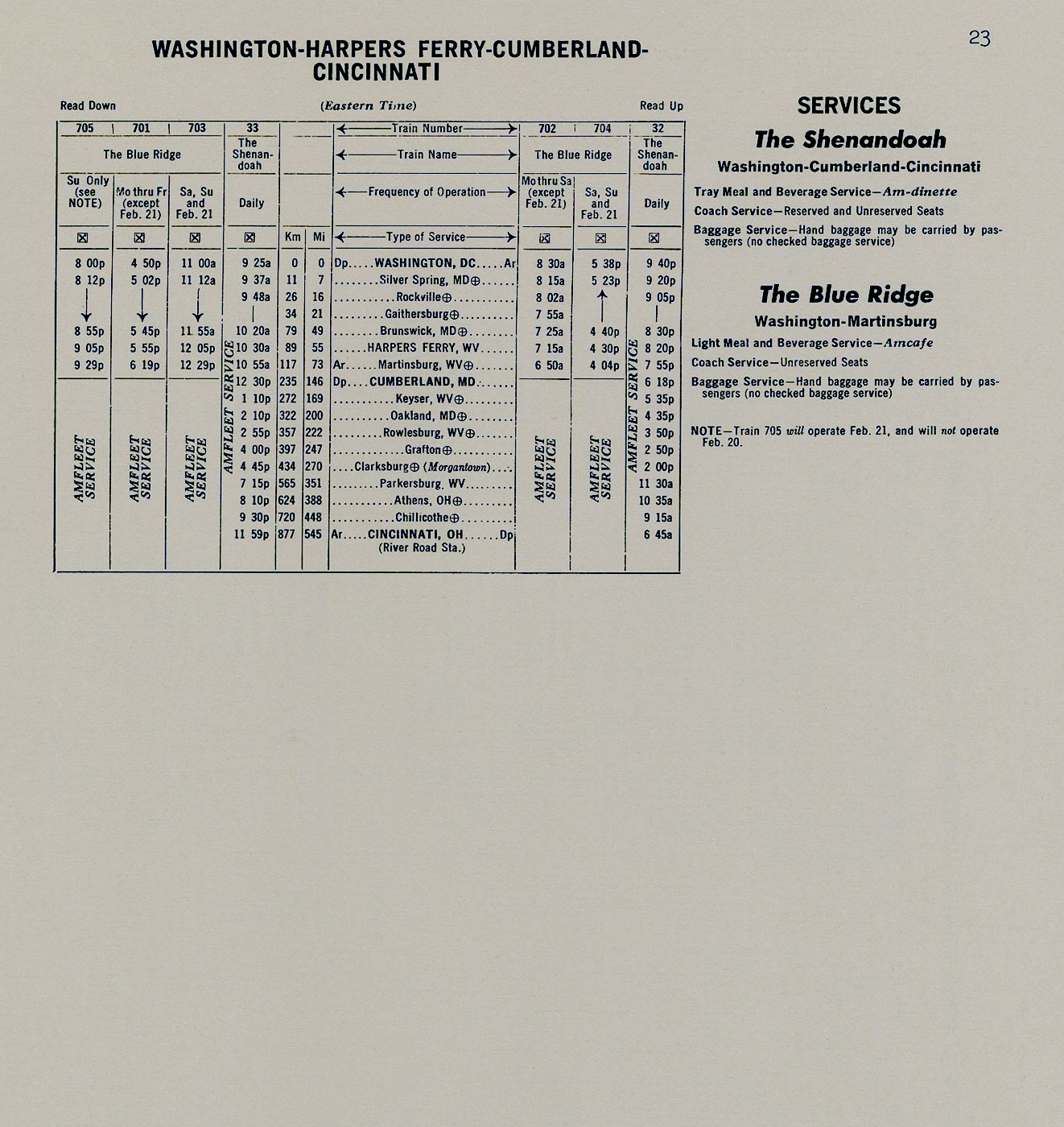 The train was later renamed as the Potomac Special but Amtrak eventually pulled it from the schedule on April 29, 1973 citing low ridership and continued mechanical issues with the trainset.

For those able to witness such a futuristic streamliner zipping across West Virginia's mountains and foothills it certainly must have been a sight to behold (bringing back memories of the B&O's beautifully streamlined Cincinnatian).

Somewhat surprisingly, this was not the end of the carrier's attempt to retain service on the route. Just a few weeks later on May 7, 1973 the regional Blue Ridge was inaugurated, running between Baltimore/Washington and Cumberland.

On October 31, 1976 Amtrak launched the Shenandoah, an extended version of the Potomac Special that reached Cincinnati.

When this occurred the carrier cut back the Blue Ridge to Martinsburg, West Virginia, essentially a suburb of D.C. The corridor was only 74 miles in length and the trip lasted just over 1 hour and 30 minutes.

However, while it may seem like another mistake the train actually did quite well as a commuter run. With five stops west of the metropolitan region that were essentially suburbs many folks found the train convenient to ride into and out of the city instead of driving or taking the bus.

When Chessie power was used a classic location for photographers to snap photos of the Blue Ridge was at the B&O's Point of Rocks, Maryland depot which sat at the junction of two main lines; the current, later line veers veers southeastward to D.C. while the older route travels eastward towards Baltimore, the "Old Main Line."

Unfortunately, Amtrak again simply had no luck running a train between Washington/Baltimore and Cincinnati.

It cited the Shenandoah as its least popular train and when budget cuts during the late 1970s forced the company to cut back its network it wasted no time in discontinuing the train.

Its last run occurred on September 30, 1981 and the route eastward from Cumberland was taken over by the Capitol Limited (which operated the B&O's old Chicago main line to Pittsburgh and on to the Windy City).

Under the MTA, which operates commuter railroad MARC Train the route is still served as its Brunswick Line and sees surprisingly high ridership.