Railroad Brakeman: How The Job Has Changed

Historically, the brakeman held one of the most danger occupations on the freight train, or anywhere on the railroad, being required to walk atop moving cars and manually apply brakes.

Later,  George Westinghouse patented the automatic air brake system during the mid-19th century which eventually did away with this perilous task.

Thankfully, newer technologies such as Westinghouse's have allowed for far greater safety although the importance of the position, itself, has also dwindled.

The brakeman in today's industry is almost always the lowest on the seniority list (following the elimination of firemen and flagmen), behind conductors and engineers.  His/her entry-level salary typically starts out in the high $30,000's.

Depending upon the railroad it is available on short lines (Class IIIs), regionals (Class IIs), and occasionally even Class I's.

You can also find similar positions on tourist railroads/excursion trains although, of course, it usually offers little in the way of steady pay.

The information presented here offers a brief overview of the brakeman's responsibilities and history within the industry.

If you are interested in a job position as a railroad brakeman, peruse the major job search websites or browse the career web pages of railroads in your area. 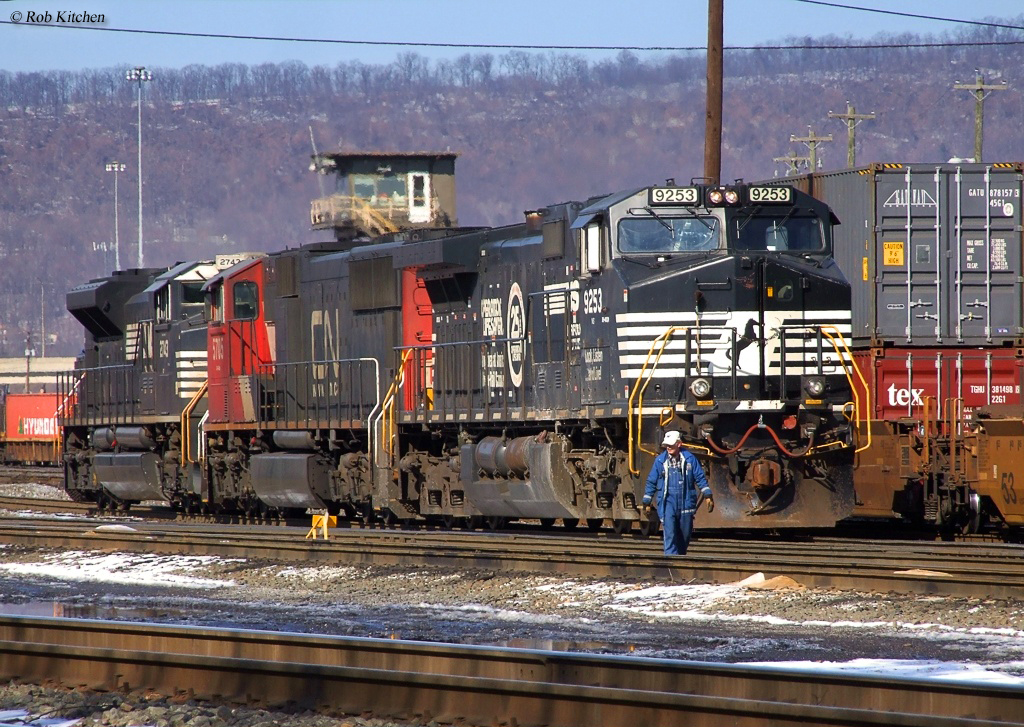 Once upon a time when there was no such thing as an automatic air brake a man was physically responsible for setting a freight car's brakes, while the train was at speed, using the available brake wheel.

As you may have guessed this was very dangerous work and what's worse, it had to be done in all types of weather; rain, snow, wind, you name it!

With the advent of the Westinghouse's design (where the train's brakes were controlled by the engineer and could be applied to all cars nearly instantaneously) the brakeman's role was reduced but not necessarily eliminated.

During the industry's formative era and long before safety became paramount the job was available to virtually any able-bodied man who could pass a basic physical.

As amazing as it seems in today's world, back then one learned his job after he was hired, not before.  He was given a few tools such as a flag, club (to turn the brake wheel), lantern, switch key (to unlock and throw switches), timetable, and rule book and off he went.

According to an excerpt from Calvin Swingle's 1908 book, "Standard Rules For Movement Of Trains" presented in Brian Solomon's, "Working On The Railroad":

"As a rule, young men who decide to engage in the railroad service as brakemen do so because there is a certain fascination connected with the business, due to the fact that they are privileged to ride through various sections of the country, with advantages similar to those for which others have to pay, affording them an opportunity to visit different villages and cities, which serve to satisfy the natural longing for travel and desire for change of scene felt by young men, especially between the ages of seventeen and twenty-five.

To make a good brakeman, a young man should be possessed of the average amount of good common sense, should have a good memory and a quick ear, should incline toward being shrewd and business-like, should be active, possessed of a sound body and a steady nerve.

He should be firm in his decisions, following closely his instructions and looking to the best interests of the company, and should always be civil and polite." 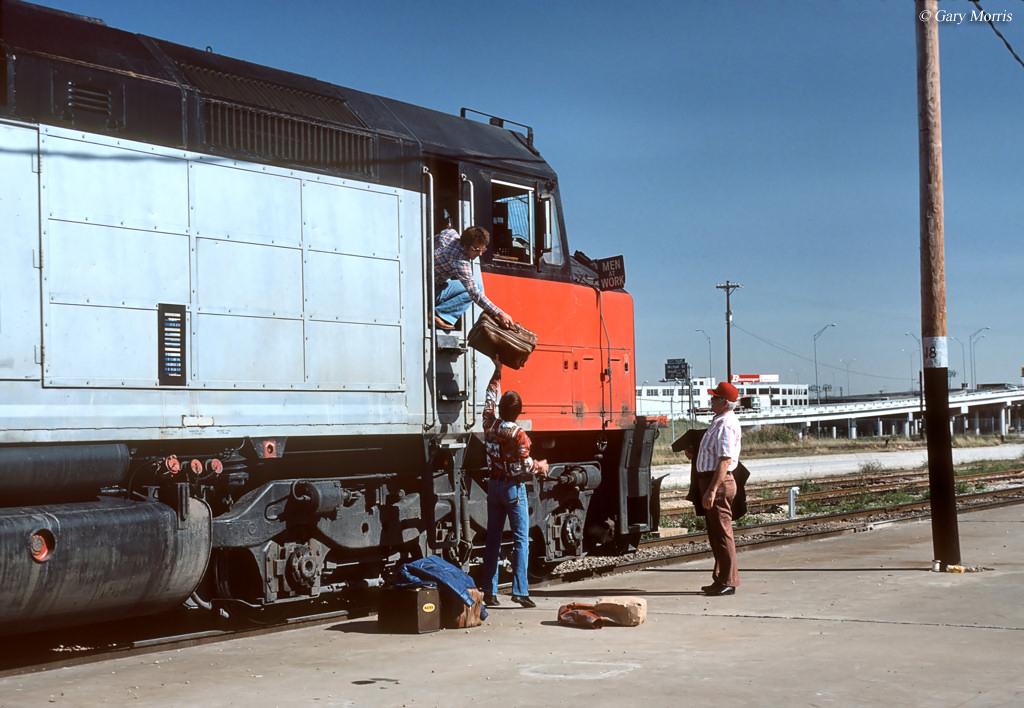 The history of braking systems within the industry date back to its infancy of the 1820s and 1830s.  Back then simple cars were equipped with simple apparatuses to physically slow them.

As Jim Boyd's book, "The American Freight Train," notes very early gravity cars utilized levers with brake shoes that would squeeze against the wheel treads to slow its movement.

At this time locomotives also carried only rudimentary means of stopping, sometimes also requiring a brakeman to climb atop the contraption to apply its brakes.

As trains became larger and heavier a more advanced means of slowing them was obviously needed.  Unfortunately, this would not come until the late 1860s.

In the meantime, and for many years following, railroads relied upon an army of brakeman who, once signaled by the engineer, would climb on a car's roof and manually apply the brake-wheel.

The worker would run from car to car doing this until he had set all of the required brakes.  It was a very dangerous occupation that resulted in many injuries and deaths.

Typical of the industry, it was slow in implementing this device, largely due to cost.  However, after Congress passed the Railway Safety Appliance Act in 1893 the air brake was required, saving countless lives while also greatly improving operational efficiency.

Following the act's passage it was still many years before air brakes were equipped on all cars and as Mr. Solomon notes those without them could still be found in service during the early 20th century.

The new technology also did not immediately eliminate the brakeman's requirement of traveling freight car rooftops. 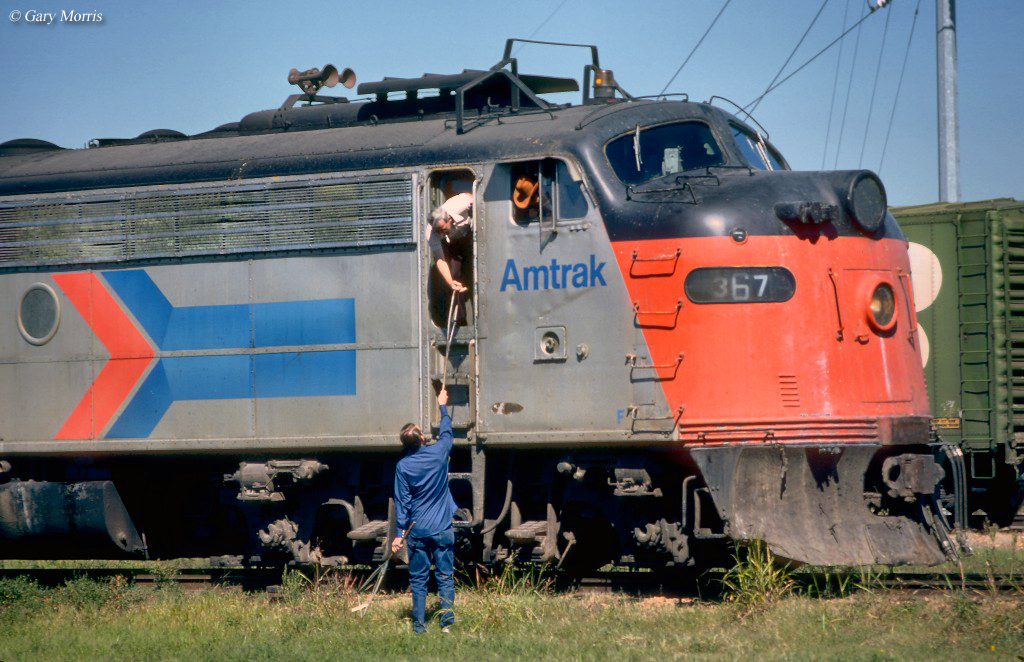 As a result, the classic, so-called "tell-tale" devices could be seen along rights-of-way well into mid-century, and even today some have been preserved.

Its purpose was simple, a cantilevered pole held dangling rope, chain, or some other material high over the track to warn any brakeman engaged in his job that an up-coming low clearance was imminent, such as a tunnel or bridge.

Once he felt the tell-tale he would have only seconds to drop to the roof or risk being seriously injured/killed.

Freight trains of this era normally carried two brakemen, one on the head-end, riding in the locomotive's cab, and a "flagman," which rode in the trailing caboose.

Each man had very serious responsibilities that included protecting the train through roll-by inspections (watching for hot boxes or some other problem with the equipment) and physically walking down the tracks to warn approaching trains of a problem (remember this was during the era long before radio or other wireless communication devices).

A Bit More About Railroad Brakemen

Along with a brakeman's job as part of over-the-road freight and passenger trains there were similar positions needed in yard jobs.

Here, the position was known as "switchman" and just as in road movements he was the conductor's subordinate, taking orders as required (in the yard conductors were known as "yard foremen").

One was constantly on the move in the yard, throwing switches, setting brakes (usually manually), and coupling/uncoupling cars.

Since the job was normally in close quarters and only short cuts of cars were being moved at a time a switchman was usually within sight of other train crewmen, such as the engineer.

As a result, he could signal them to improve the safety and efficiency of the work being performed using either his hands/arms, flag, or lantern.  These signals were as follows:

Back:  Swing the flag/lantern in a vertical motion across the tracks.

Proceed: The flag/lantern is vertically raised/lowered. 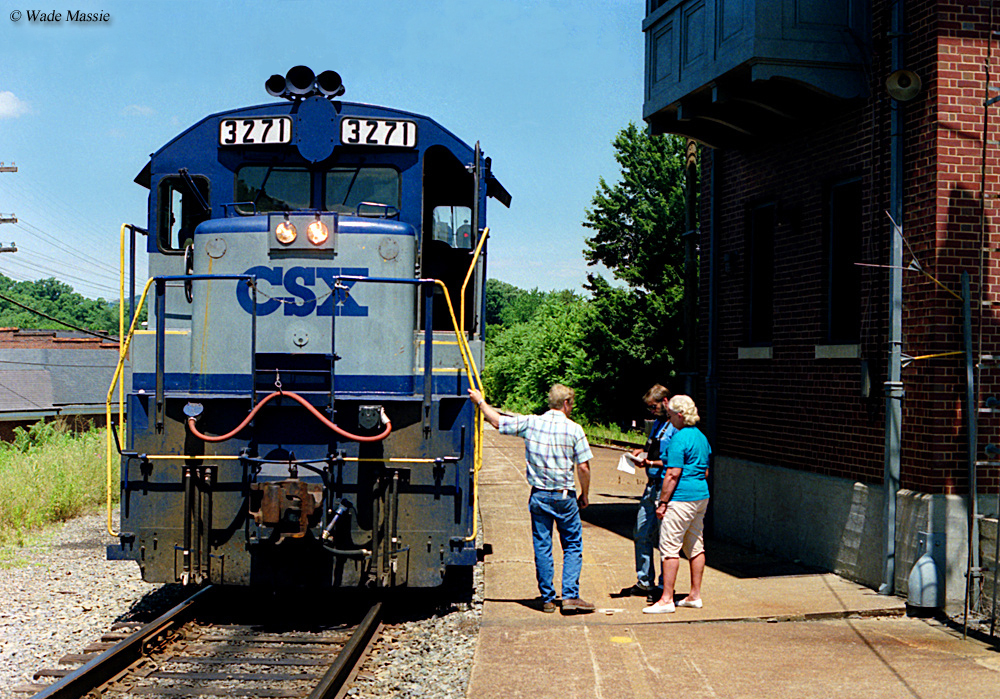 The head-end brakeman had the most exhaustive job as he was required to constantly jump on and off the train to line switches and couple/uncouple cars during switching assignments.

This was performed within all types of weather; rain, snow, wind, cold, or extreme heat.  He also walked ahead to protect the train in some cases.  In this regard, however, the flagman at the rear had the greater responsibility.

"Flagman's primary responsibility was to protect the rear of the train.

When the train stopped suddenly, you didn't ask any questions as to why you stopped, you grabbed your flagging kit, your fusees, your track torpedoes, and you hit the ground running.

You were required to go back two miles to protect the train and you strapped torpedoes to the rail and lit the fusee to make sure trains had plenty of warning."

The brakemen remained on-scene to protect their train until receiving an "all clear" signal of four or five short blows of the whistle from the engineer (one long and three shorts signaled the flagman to initiate protection procedures). 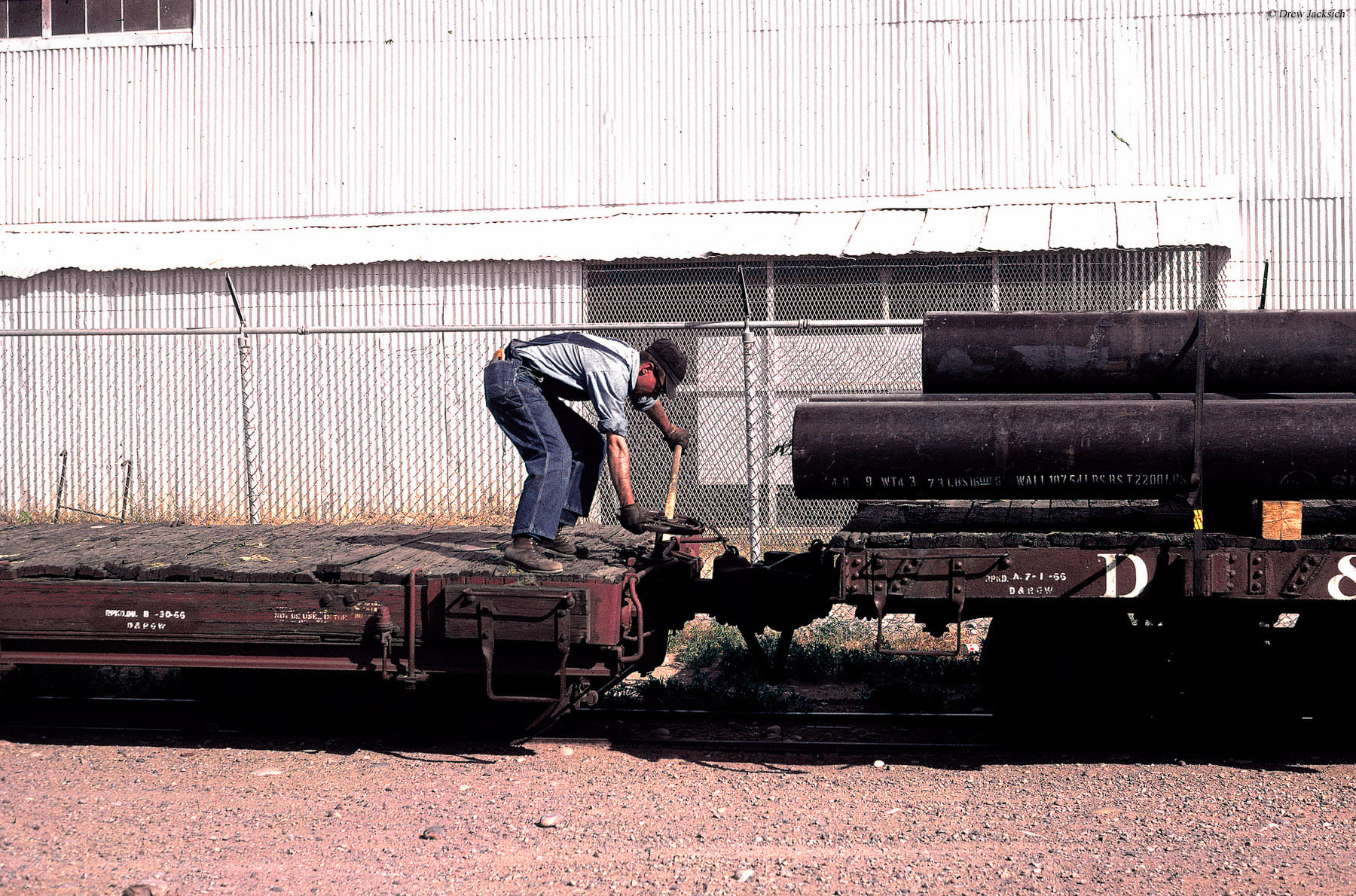 A Rio Grande brakeman "clubs down" the hand brake on a flatcar at the end of the narrow-gauge Farmington Branch in Farmington, New Mexico during June, 1967. Drew Jacksich photo.

Today, the job of the brakeman is mostly relegated to throwing switches when needed and coupling or uncoupling cuts of cars whether being done in yards or out on the main line.

As mentioned before, if you have never worked for a railroad or know much about the industry please let me warn you that a career such as brakeman is not for the faint of heart.

Railroading is tough work and takes a dedicated breed not only to handle the physical demands required but also the mental fatigue, as working 12-hour, seven-day-a-week shifts is normal (and overtime is mandatory).

While a more predictable work schedule does come with seniority, don’t expect it to happen within a short period of time.

Some railroaders wait 20 years or more to land a “9 to 5” workday, which usually consists of working yard or local jobs.

There is a reason why railroaders say that railroading becomes a lifestyle, its not just saying! Having said that, if you are able to hire on with a short line (Class III) or regional (Class II) railroad the opportunity for a more predictable schedule is very likely although the pay is not quite as good.

As far as I know there are no formal collegiate classes taught to learn the position of brakeman, the training is done by the individual railroad which hires you.

It should also be noted that a type of brakeman is also carried out on passenger trains where they are known as trainman, who's duties mostly consist of assisting the conductor as needed.