While the argument will forever endure which was the more successful and prestigious what cannot is their distinctive different styles.

The 20th Century Limited catered to business travelers and “new money” with its modernistic cool, sleek designs and colors while the Broadway featured light, airy, and cheery accents and accommodated more to the older crowd.

For decades, starting in the early 20th century Pennsy offered a crack train serving Chicago and New York but as other modes of transportation began taking their toll after World War II the railroad cutback the amenities it provided.

Despite reduced services the Broadway was one of the last trains offering an all-Pullman status and it even outlived its parent until being canceled by Amtrak in 1995.

The Broadway Limited had its beginnings dating to 1912 when it took the place of the Pennsylvania Special.  This train had been serving the New York to Chicago corridor for about a decade, launched in 1902. 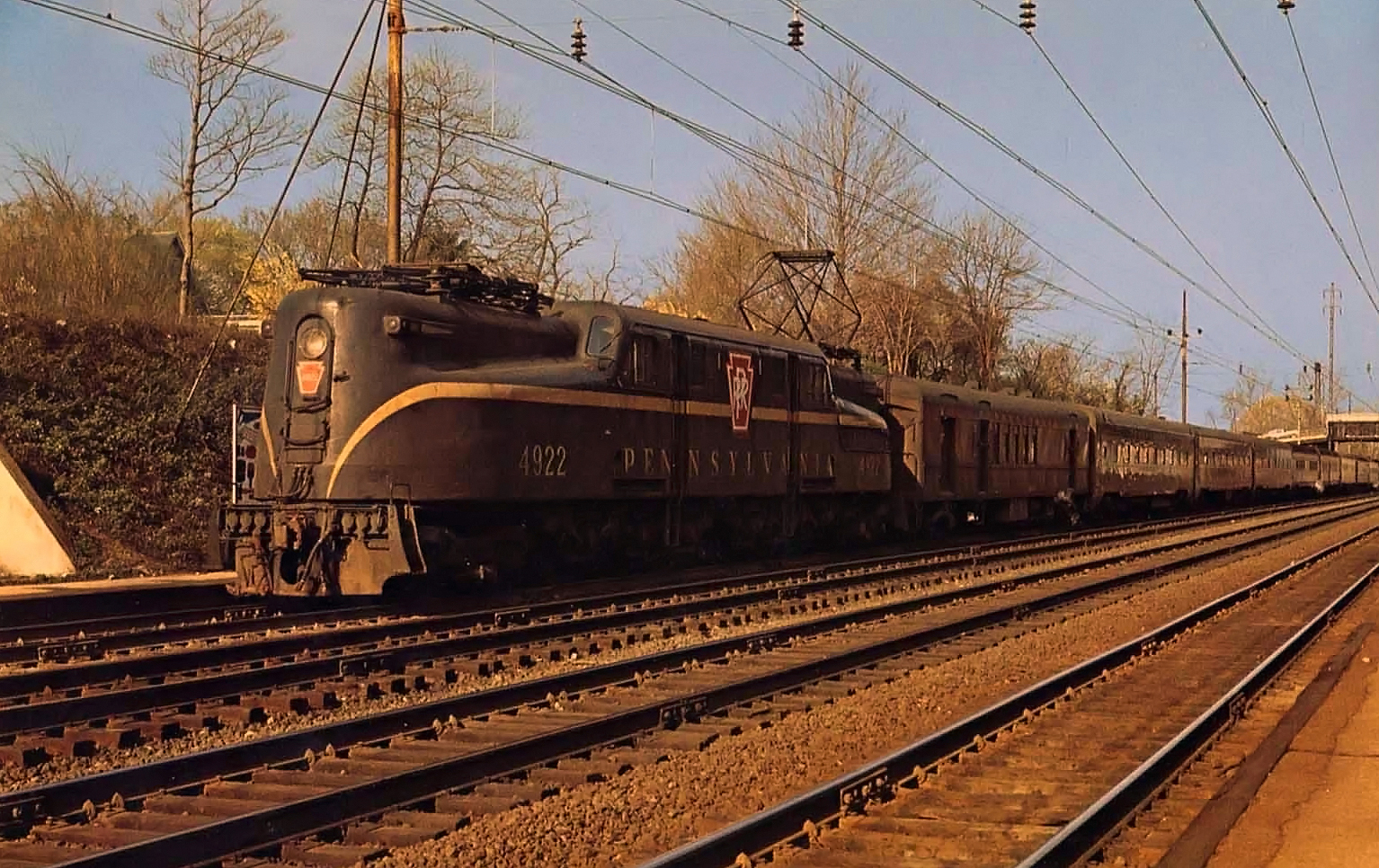 In this postcard scene, Pennsylvania GG-1 #4922 is ahead of the eastbound "Broadway Limited" at Paoli, Pennsylvania during the 1960's.

For the first thirty years both the Broadway and 20th Century were somewhat conservative in the nature of their accommodations and changed little aesthetically using standard heavyweight passenger equipment and traditional steam locomotives.

However, when the streamliner craze took root in the 1930s that all changed.  The PRR and NYC were constantly watching each other to make sure neither upstaged the other. In the case of streamlining it was the Central which got things started.

In 1936 the NYC experimented and custom streamlined its Mercury running between Detroit and Cleveland. That same year, rather pleased with the results of this experiment the Central began serious discussions to streamline its flagship.

With no streamlined train yet of it’s own, after hearing of Central's intentions the PRR approached its rival wondering if the it would be interested in a joint effort of streamlining their flagships to which the NYC agreed.

The builder of their trains was the industry standard of the day, the Pullman Company (the Pullman-Standard division actually manufactured the equipment; at one time Pullman was a massive operation with several subsidiaries).

What’s interesting is that both trains, from a blueprint standpoint, were virtually identical since Pullman was very good at standardization as a cost savings tool (today, the practice is widespread, of course). 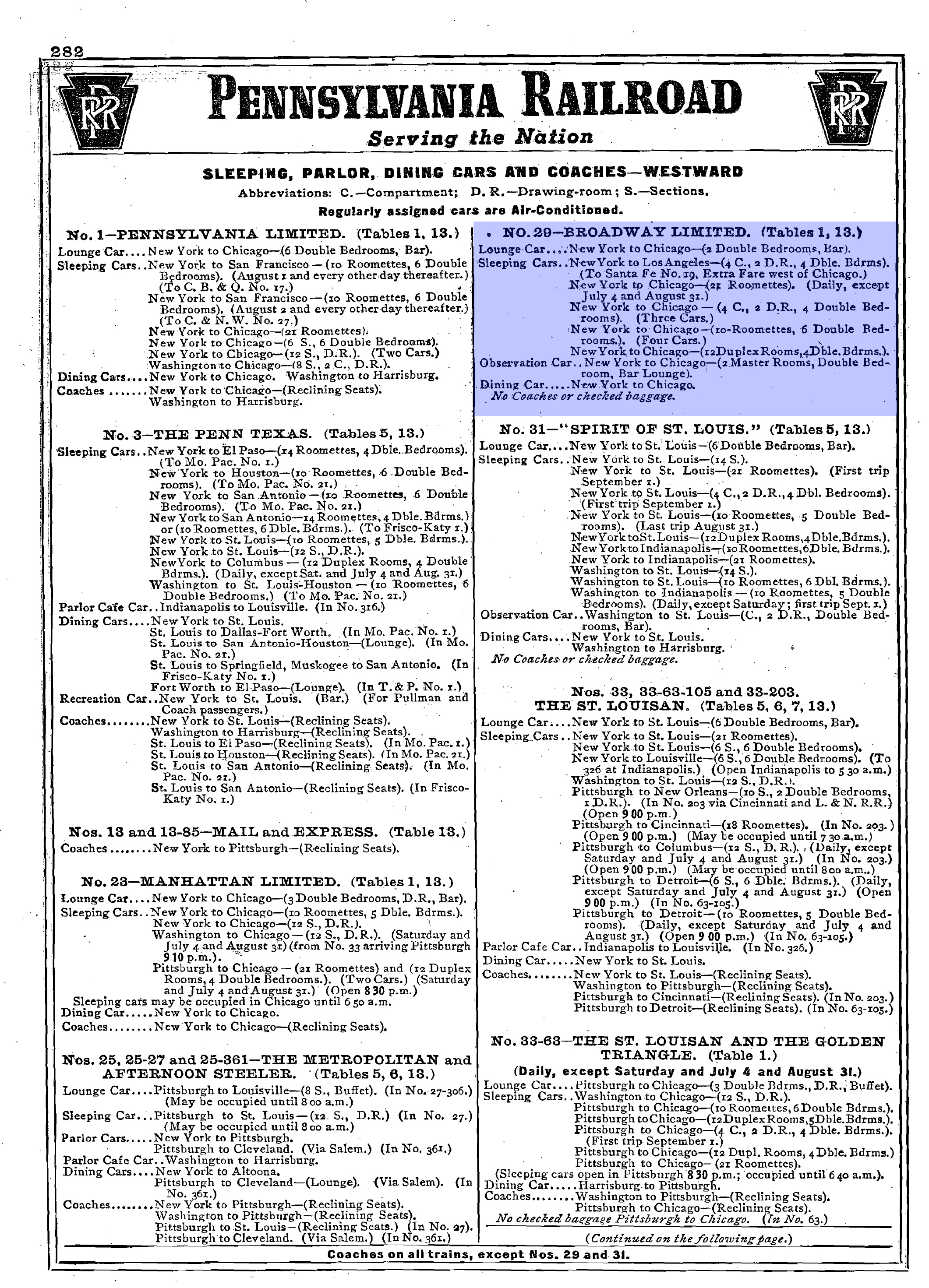 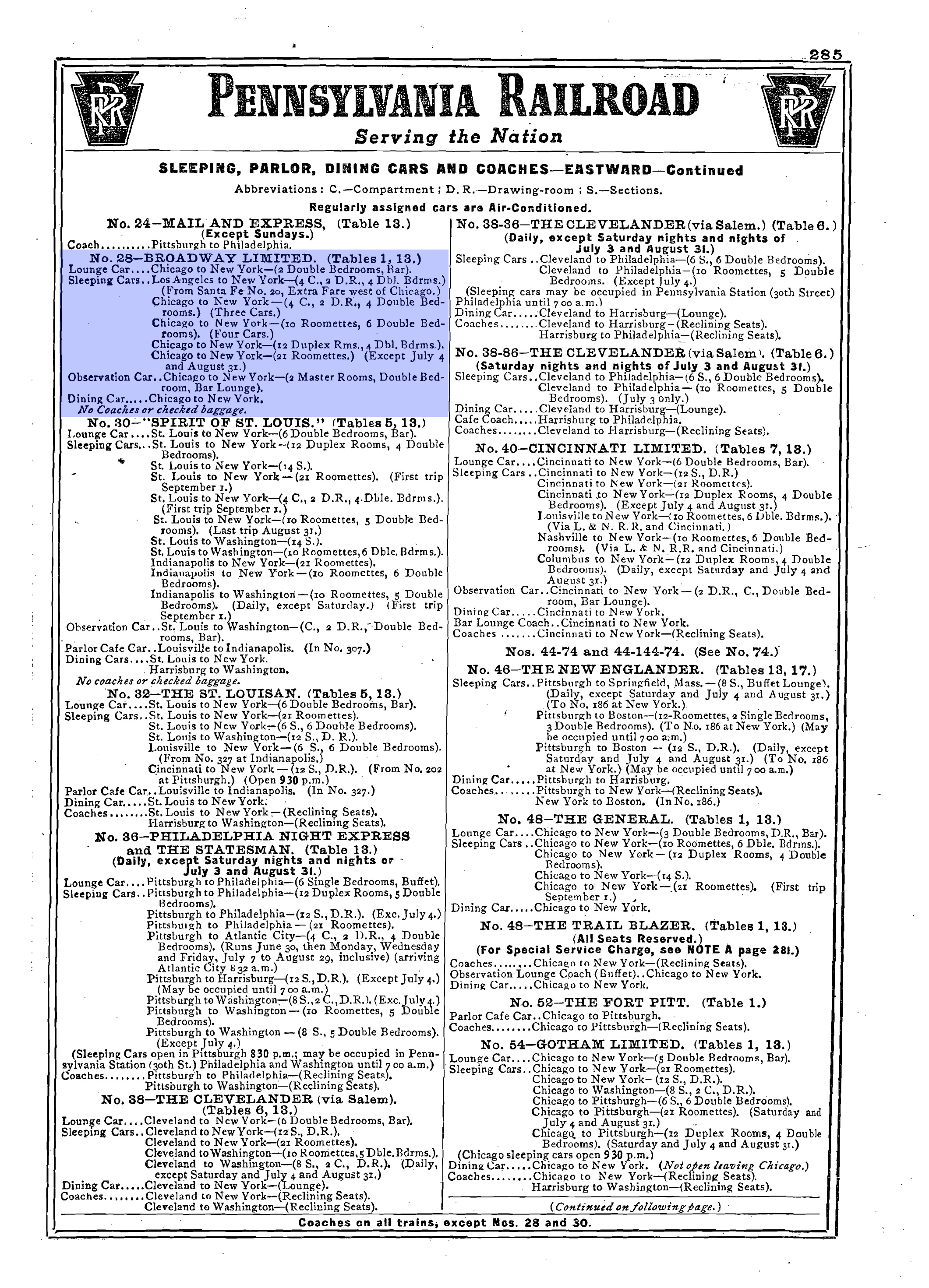 However, from an aesthetics standpoint the two could not have been more different inside and out after designers were finished with their touches.

Following delivery of its 52-car order (which became known, and advertised, by the Pennsy as its “Fleet of Modernism”) from Pullman the railroad quickly set to designing a new streamlined version of its Broadway Limited. 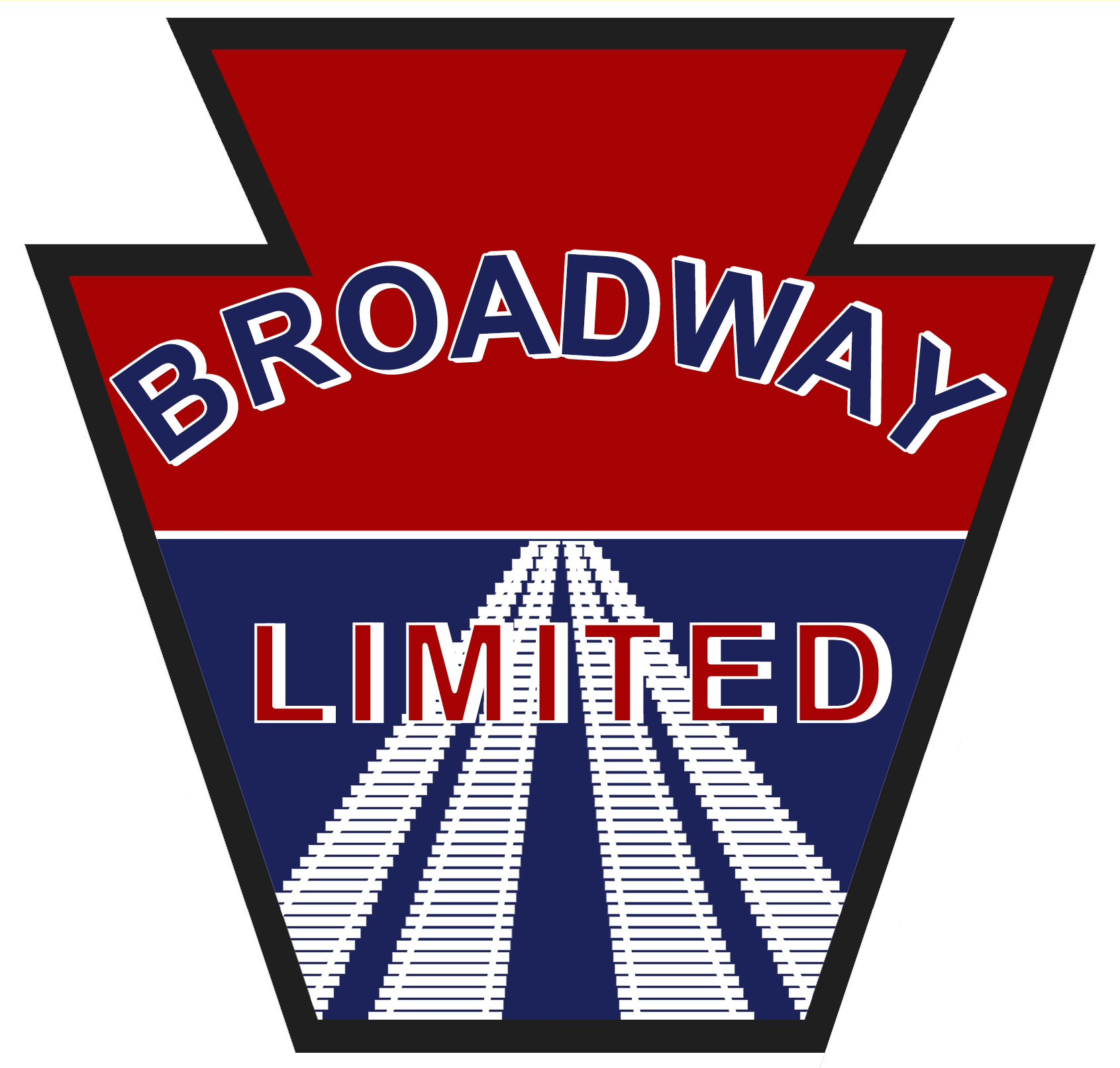 Notable equipment the train carried included a bar-lounge sleeper, dining car, buffet-lounge sleeper-observation, and four sleepers all serviced through Pullman; such was the trademark of a first-class train.  To do this is the railroad hired the man who made its GG1 electric locomotive legendary, Raymond Loewy.

For the Broadway’s exterior (and interior, to some degree) Loewy stuck with the color that Pennsy was by then quite famous for, Tuscan red. In addition he added gold pinstriping, similar to his design on the GG1 (except without the cat whiskers). 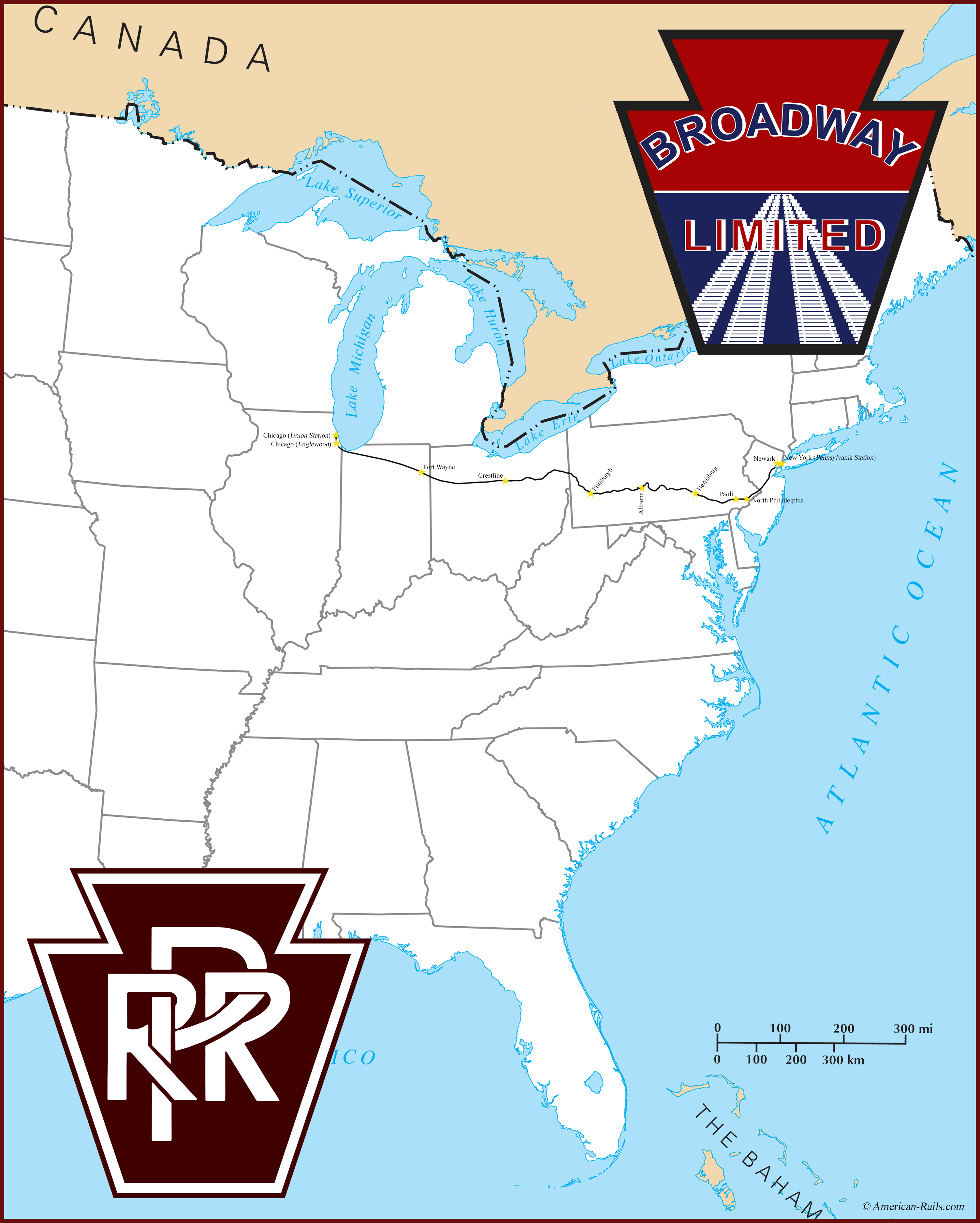 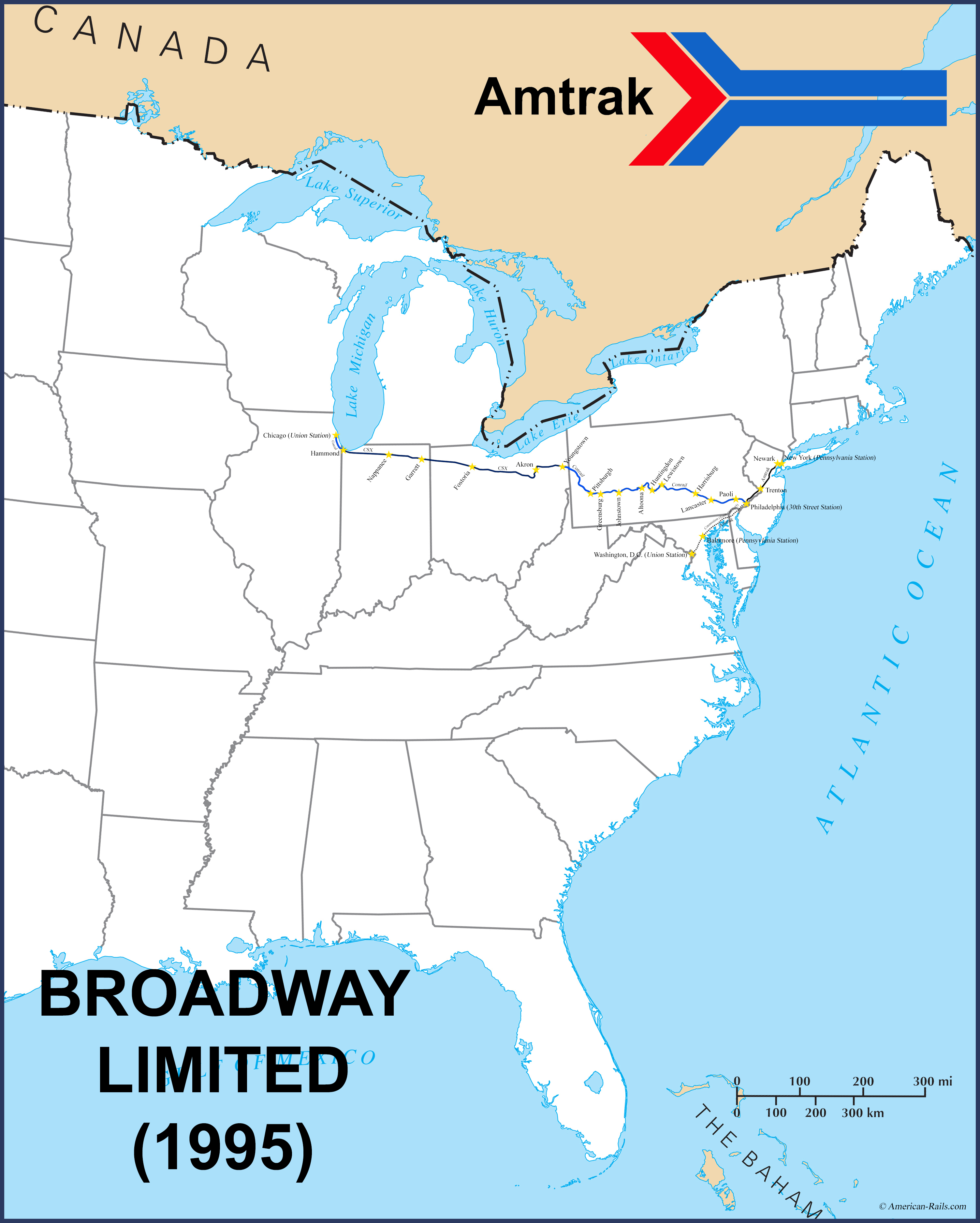 A route map of the "Broadway Limited" during its final year of service. Author's work.

For the train’s interior Loewy used airy and cheery colors with blends of red, yellow, orange, black, blue, and white throughout, at times also including wood veneering.  As with the 20th Century Limited the hallmark car in the train was the sleeper-observation.

Here Loewy used blue for the seating and copper, rose, and tan for the walls and ceiling adding indirect lighting to give the car a soft glow.

In addition, near the back he partitioned the car using protruding, rounded sectioning whereby the extreme end featured seating facing towards the windows so passengers could watch the landscape retreating away from them; for the time this was an evocative design.

Because the PRR had such extensive electrified operations the train was operated by GG1s from the Big Apple, south to Philadelphia, and west to Harrisburg (the western extent of the Pennsy's energized system).

From here to Chicago one of the railroad famed Class K4s Pacifics carried the train with an average speed of more than 57 mph.

To match the rest of the train's streamlined appearance in 1936 Loewy provided similar touches to some of the K4s.  The first to receive this treatment was #3768, which sported somewhat of a torpedo look.

(The below Broadway Limited timetable is dated effective November of 1969.  Note the train still holds a schedule close to its 1938 counterpart with a few additional stops added.  It has also changed train numbers in the Penn Central era.)

Interestingly, for all of the Broadway's grandeur the Pennsy never bothered having its locomotives match the rest of the train. Streamliners were typically linear in nature with the locomotive and cars matching one another uniformly and featuring type of round-ended design for the observation car (a classic design of the era).

However, the GG1 featured a curved nose on each end (and “cat whisker” pinstriping that sloped downward at each end), "breaking" its linear appearance and the  #3768 was painted in Brunswick green while the equipment carried classic Tuscan red (by comparison the New York Central designed and painted its 20th Century Limited to match perfectly). 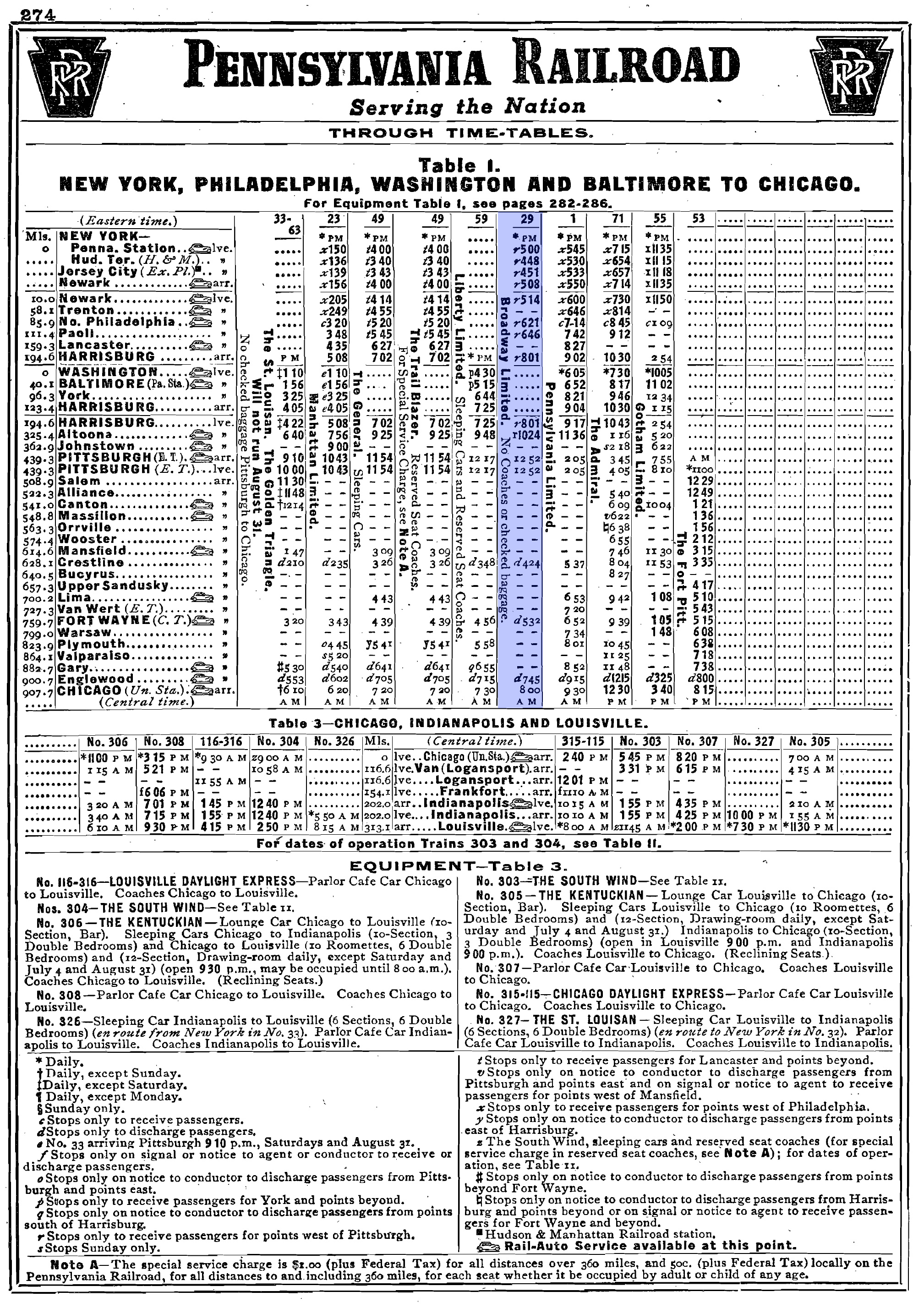 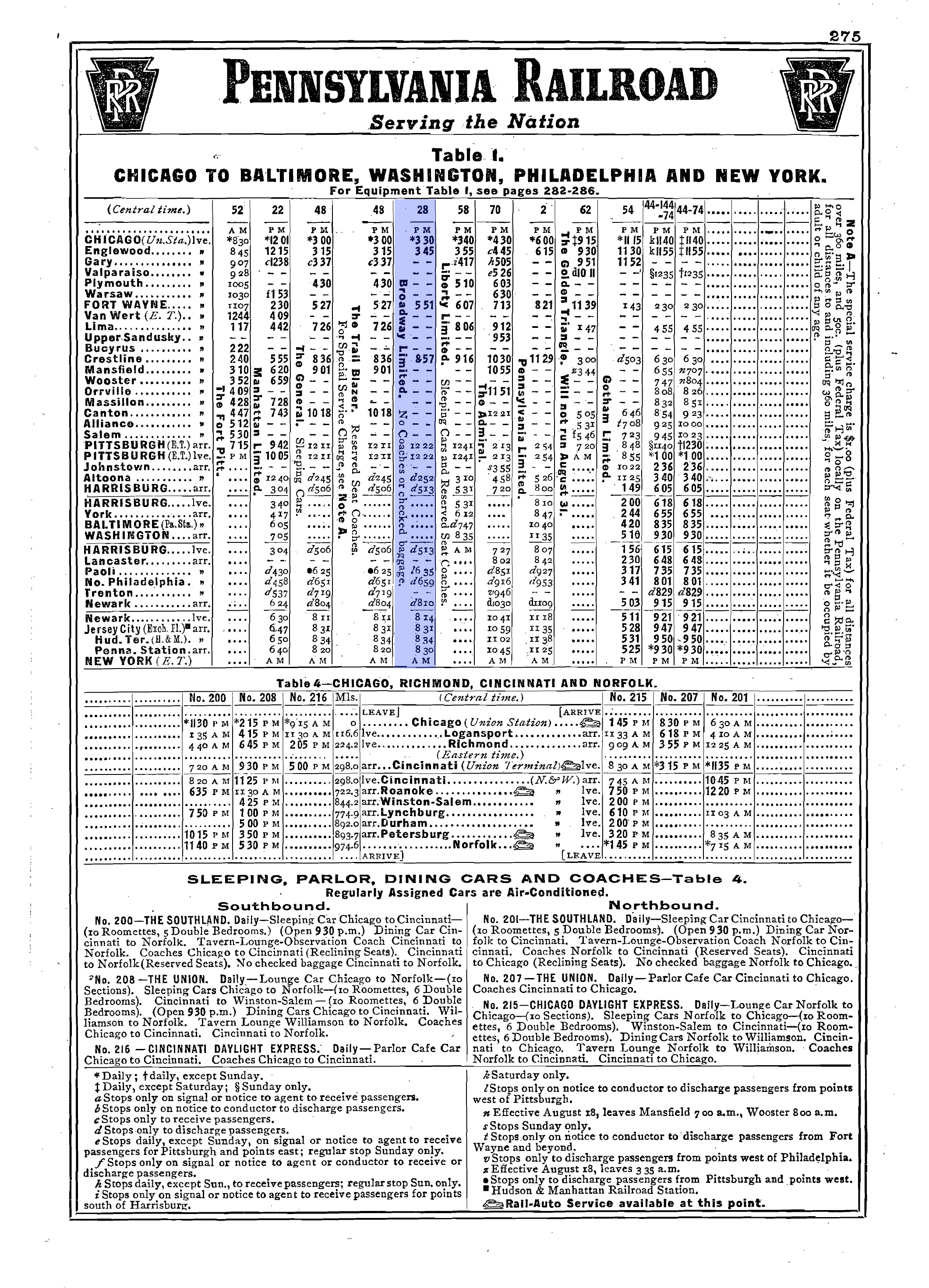 Despite rail travel waning during the 1950s the Pennsy wasted precious resources in upgrading its passenger fleet.    For more reading about the train, such as brochures, ads, and menus please click here.

While the railroad was likely hoping new equipment would bring travelers back to the rails, focusing efforts on freight operations would probably have wrought more fruitful results.  The results and effort did little to curtail ridership losses.

By the 1960s the train and Penny's entire commuter/passenger operations were becoming a serious drain on the company's finances.

Finally, in 1967 the PRR discontinued the Broadway’s “All Pullman” status, one of the last train's boasting such regal accommodations.  Sadly, within a few years the once powerful and profitable Pullman, synonymous with rail travel for more than a century, had exited the business.

While a version of the Broadway continued operating under the Penn Central banner, and later Amtrak, it carried none of the allure as it had during the Pennsylvania era.  After more than 20 years of service under Amtrak the train made its final run on September 10, 1995.