The Buffalo, Rochester and Pittsburgh Railway was a western New York and Pennsylvania system that was best remembered for hauling vast amounts of coal from the region in which it served, particularly in the Keystone State.

It reached two of its namesake cities (Buffalo and Rochester) but interestingly never provided direct rail service into Pittsburgh.

Despite this it was able to reach the Steel City beginning in the 1880s thanks to trackage rights over a PRR subsidiary, and then later the Baltimore & Ohio from Butler, Pennsylvania sharing that railroad's Smithfield Street Station in Pittsburgh.

In 1932 the BR&P was taken over directly by the B&O, which for years held an interest in the company as president Daniel Willard attempted to expand his company's reach into western New York.

Today, large sections of the BR&P remain in operation under the Buffalo & Pittsburgh, part of the Genesee & Wyoming family of short lines.

The history of the Buffalo, Rochester & Pittsburgh is often times merely forgotten since it was gone prior to the colorful diesel era, which coincided with the beginnings of the railfan hobby documenting trains on film.

The BR&P also largely stayed out of the public eye; its passenger services were minimal and the road focused primarily on handling coal from mines in west-central Pennsylvania to Great Lake ports at Buffalo and Rochester, New York.  The earliest predecessor of the BR&P was the Rochester & State Line Railroad, organized on April 8, 1869.

According to the book, "Coal Trains North:  The Rochester & Pittsburgh Railroad Company," by author Robert Rothfus, anger was growing with the Erie Railway in western New York during the 1860s as the price of coal was continuing to rise.

At the time coal was an important source of fuel to heat both residential homes as well as commercial businesses.  To combat what was foreseen as price gouging, local businessmen formed their own railroad, the R&SL.

The line did complete 107 miles from Rochester to near Salamanca by 1878 although never came close to the Pennsylvania coal fields, forcing it to survive on agriculture, less-than-carload freight, and any other general business it could muster.

Not surprisingly, the R&SL failed and was reorganized on January 17, 1881 as the Rochester & Pittsburgh Railroad.  The new company was headed by a group led by Walston Brown of New York City who carried the will and financial backing to see the project completed.

Their goal was to push rails beyond Rochester to Charlotte along the banks of Lake Ontario while an extension beyond Salamanca into the Pennsylvania coal fields would allow the R&P to act as a conveyor belt moving black diamonds to a notable port for shipment.

In addition, the railroad eyed a southern connection into Pittsburgh where more coal could be off-loaded while also interchanging with all of the important lines reaching that city.

However, as was so common during those times, many interests worked hard to prevent Brown from finishing his project.  The R&P lay within the heart of territory controlled by either the New York Central or Pennsylvania Railroads, which had no interest in seeing additional competition. 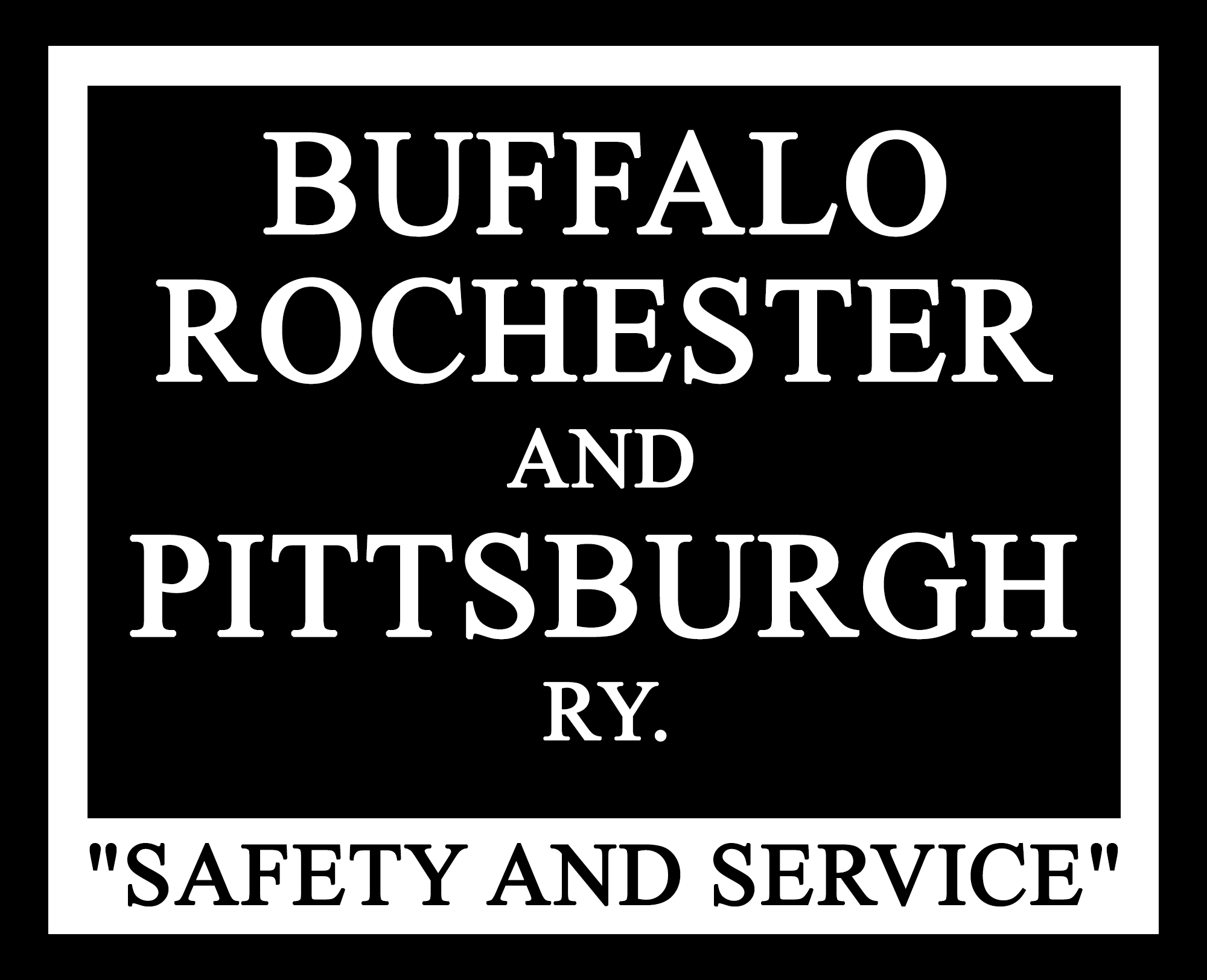 Despite many setbacks, Brown eventually executed part of his plan, extending a route from Salamanca to Punxsutawney via Bradford, Ridgway, and DuBois.

The southern connections offered an interchange with the Allegheny Valley Railroad (PRR) at Punxsutawney and NYC at DuBois (this town also became the location of a major locomotive and car repair/maintenance facility).

Construction on the line began in June of 1881 and was completed in 1883.  At the same time the R&P worked on a branch to Buffalo, which also opened in 1883.

It connected with the main line at Ashford, roughly 16 miles north of Salamanca (here, at East Salamanca the BR&P would construct another important maintenance facility during the World War I era), and continued northward to Buffalo via Springville and Orchard Park.

The first passenger trains used this new extension on November 19th.  Soon after the opening of its primary main lines the R&P reached Pittsburgh thanks to a trackage rights agreement with the PRR's Allegheny Valley while also gaining connections with rival New York, Lake Erie, & Western Coal & Railroad Company (an Erie Railway subsidiary).

The R&P rather quickly developed a substantial coal and coke business along its property between DuBois and Punxsutawney (gross income rose nearly ten-fold between 1881 and 1885), which gave it some leverage against its largest neighbors mentioned above in contracting terms and working out cooperative dealings.

However, things remained tense in these early years and as competitors slashed rates the R&P struggled financially.  It fell into bankruptcy after defaulting on an interest payment in the summer of 1884.

On October 16, 1885 it was sold to Adrian Iselin although court disputes in Pennsylvania and New York took took some time to remediate.

In the meantime the New York and Pennsylvania segments were operated separately; the former became known as the Buffalo, Rochester & Pittsburgh Railroad Company while the latter was renamed the Pittsburgh & State Line Railroad Company.

Finally, the disagreement was resolved a few years later with both sections were reunited as the Buffalo, Rochester & Pittsburgh on March 12, 1887.  The new BR&P was never an overly profitable system and its primary source of revenue remained based in coal. 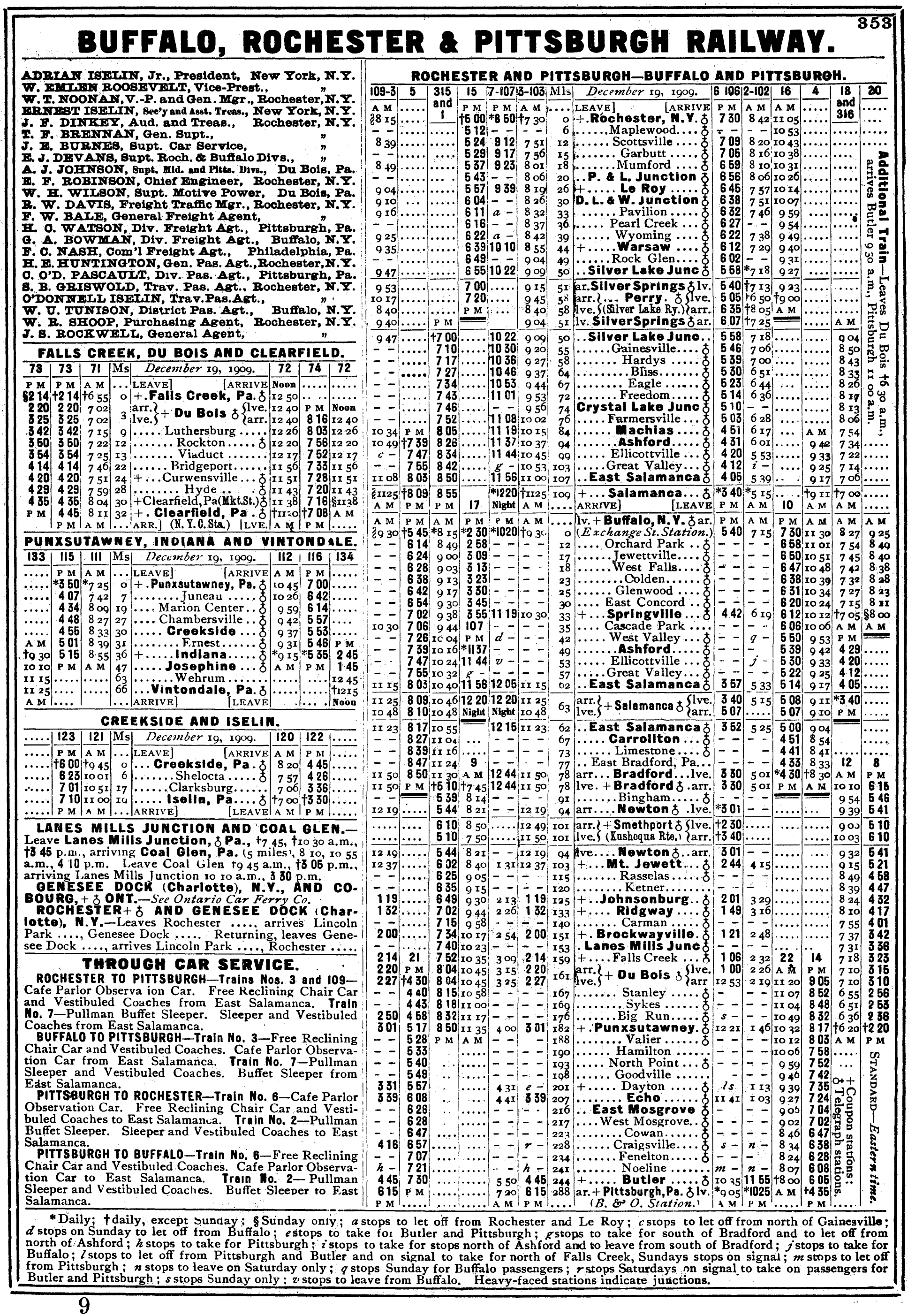 Aside from its Pennsylvania coal fields the BR&P also operated a car ferry service between Charlotte and Cobourg, Ontario. It was provided in conjunction with the Grand Trunk Railway and lasted between 1907 and 1950, when it was discontinued.

By the BR&P's "late era" of the early 20th century it fielded an impressive fleet of steam locomotives, operating large 2-6-6-2 and 2-8-8-2 Mallets to handle the heavy tonnage.

According to David Mainey's book, Baltimore & Ohio Steam In Color, the Mallets were an older design and had remained virtually unchanged during its ten year production run featuring large, bulbous low-pressure cylinders and old-style slide valves.

After B&O ownership they were reclassified as KK-4a through KK-4d, numbered 7500-7554.  They largely stayed on the Buffalo Division until their retirement during the 1950s.

They were classed as XX and handled the same heavy coal tonnage as the 2-6-6-2's.  Upon B&O ownership the locomotives were re-classed as EE-2, remaining in service until the 1950s.

After less than 45 years the BR&P, then a system of 520 miles, lost its independence forever when it formally became part of the B&O's vast network in 1932. 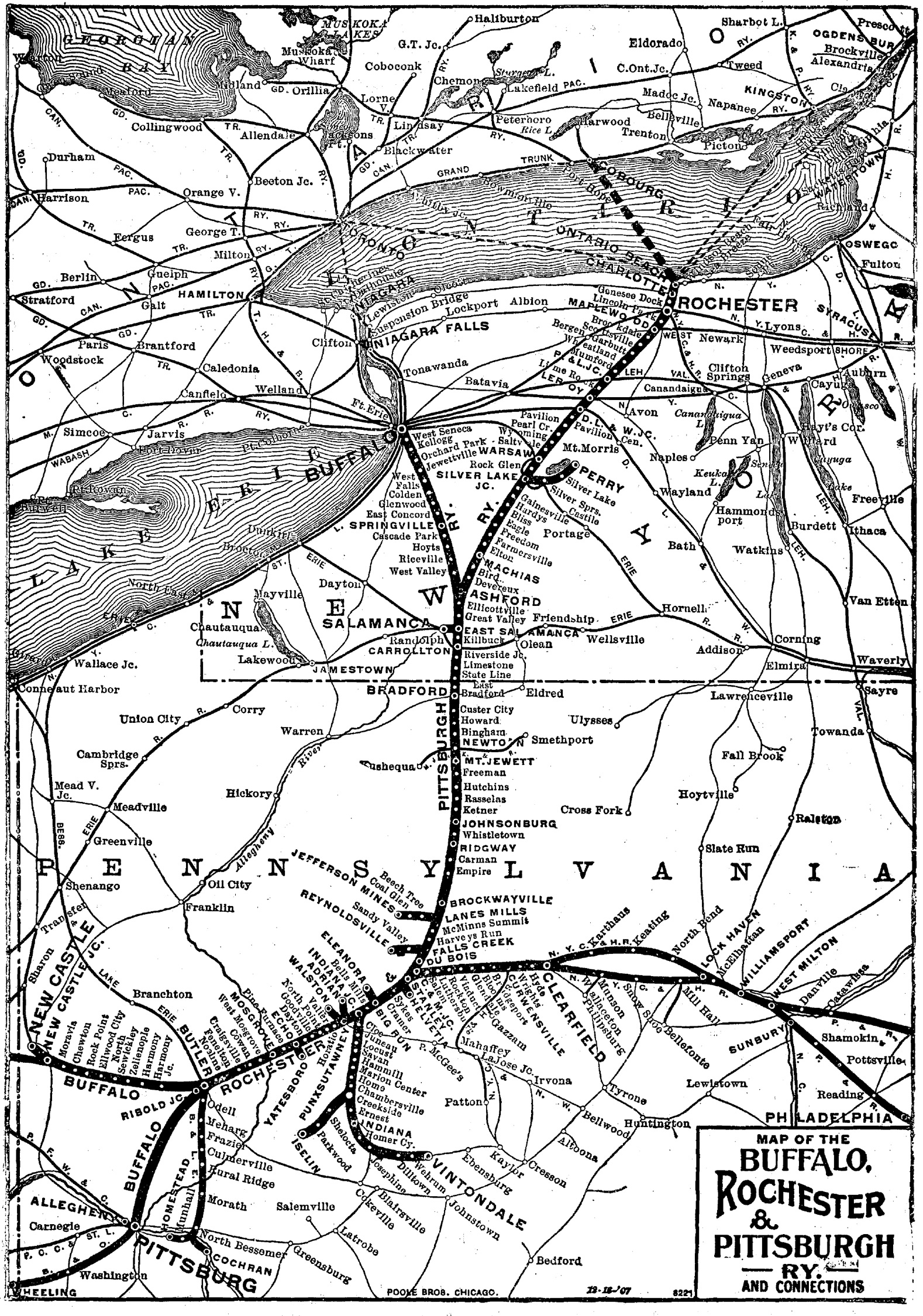 The Baltimore & Ohio had first acquired a controlling interest in the road during 1929 before purchasing it a few years later.

Despite the ongoing Great Depression, influential B&O president Daniel Willard, who led by the company from 1910 to 1941, was attempting to use the BR&P as a springboard in opening new markets for his railroad across Pennsylvania, the coveted New York City market, and finally reach New England.

The BR&P's Class P included part of its roster of 2-8-0 Consolidations.

The BR&P's Class S included part of its roster of 2-8-0 Consolidations along with its fleet of 4-8-0 Twelve-wheelers.

The BR&P's Class V included part of its roster of 2-8-0 Consolidations.

The BR&P's Class W included its roster of 4-4-2 Atlantics.

The BR&P's Class WW included its roster of 4-6-2 Pacifics.

The BR&P's Class X included part of its roster of 2-8-0 Consolidations.

The BR&P's Class XX included its only roster of massive 2-8-8-2 heavy articulateds.

Unfortunately, today only one BR&P steamer is known to exist, an 0-6-0 switcher on display in Bellevue, Ohio.

(Thanks to Todd Blide with help regarding the information on this page.)

The B&O never controlled its own, direct route into the Big Apple and the BR&P acquisition was one step in making this happen, which would have offered a much better competitive advantage against the PRR and NYC in the coveted New York - Chicago corridor.

The railroad also acquired the nearby 228-mile Buffalo & Susquehanna for this purpose but alas it reached no further east due to the depression and had to settle to linking only Buffalo and Rochester (the B&S property was later sold or abandoned).

The last passenger train ran across the former BR&P trackage on October 15, 1955.

While the BR&P was only marginally successful even under B&O ownership, interestingly, much of the former system remains in operation today under the Buffalo & Pittsburgh, a Genesee & Wyoming system.

It began operations in 1988 buying former sections of the B&O and BR&P in Pennsylvania and New York from CSX. Today it covers more than 400 miles and in 2006 was even named the Regional Railroad of the Year by Railway Age magazine.