The Columbus & Greenville Railway, otherwise known by its reporting marks (CAGY), is a historic short line dating back to the early 20th century.

The system was a longtime component of the Southern Railway although always remained a subsidiary due to Mississippi state law.

Its name was changed to the Columbus & Greenville Railroad in 1920 and was spun-off from the Southern three years later.

The CAGY maintained a linear network, running from the Mississippi River at Greenville to Columbus, near the Alabama state line. 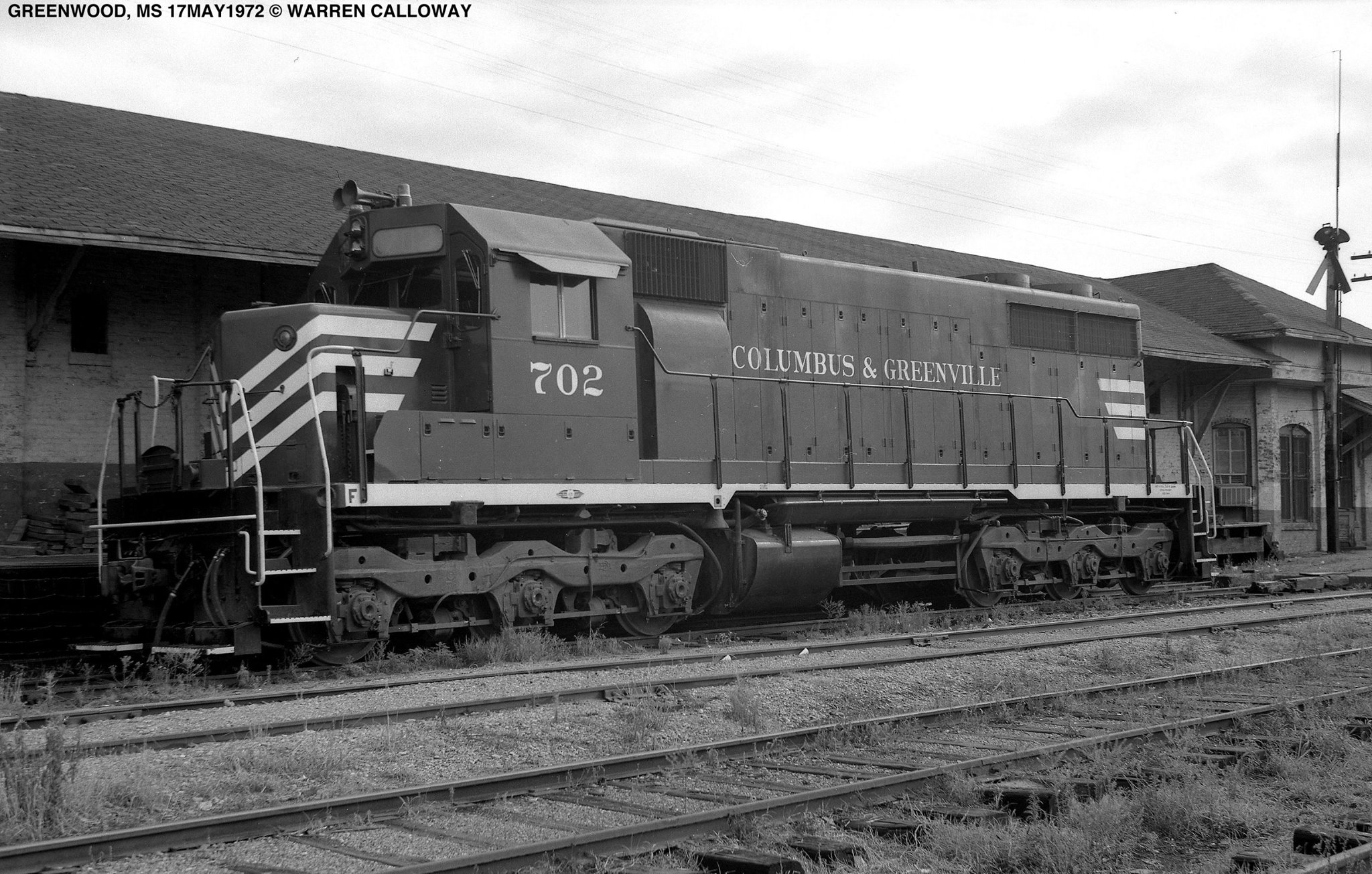 Columbus & Greenville SD28 #702 is seen here at Greenwood, Mississippi on May 17, 1972. A rare model few were purchased this was acquired new by CAGY in 1965. Warren Calloway photo.

Mergers and bankruptcies, abandonments, and spin-offs have hurt the company over the years as it has lost many of its interchange points.

In 2001 severe washouts forced the railroad to embargo 89.5 miles of main line between West Point and Greenwood.

This trackage remains out of service today under Genesee & Wyoming, Inc. which purchased CAGY Industries in 2008.

The future of this property is, unfortunately, in doubt following two decades of no use.

However, one of the strengths of the original CAGY was its through route, the shortest trip across the northern part of the state.  In addition, the town of Winona includes a connection to short line Grenada Railroad (ex-IC).

The first spike of the Greenville, Columbus and Birmingham Railroad, today known as the Columbus & Greenville Railway was driven in Greenville on January 5, 1879 by Mrs. H. B. Theabold who was a prominent Greenville, Mississippi citizen.

The track was completed eastward to Stoneville on March 31, 1878, and the first scheduled passenger service was started April 8, 1878, with two round trips scheduled daily between Greenville and Stoneville, Mississippi.

Passenger train service was extended as each track segment was completed. The construction of the station at 205 Central Avenue was authorized in 1886 and the building was completed in 1888.

It was what I call mock fortress architecture in which the top of the walls all around looked like a fort with no overhang and fake gun ports. 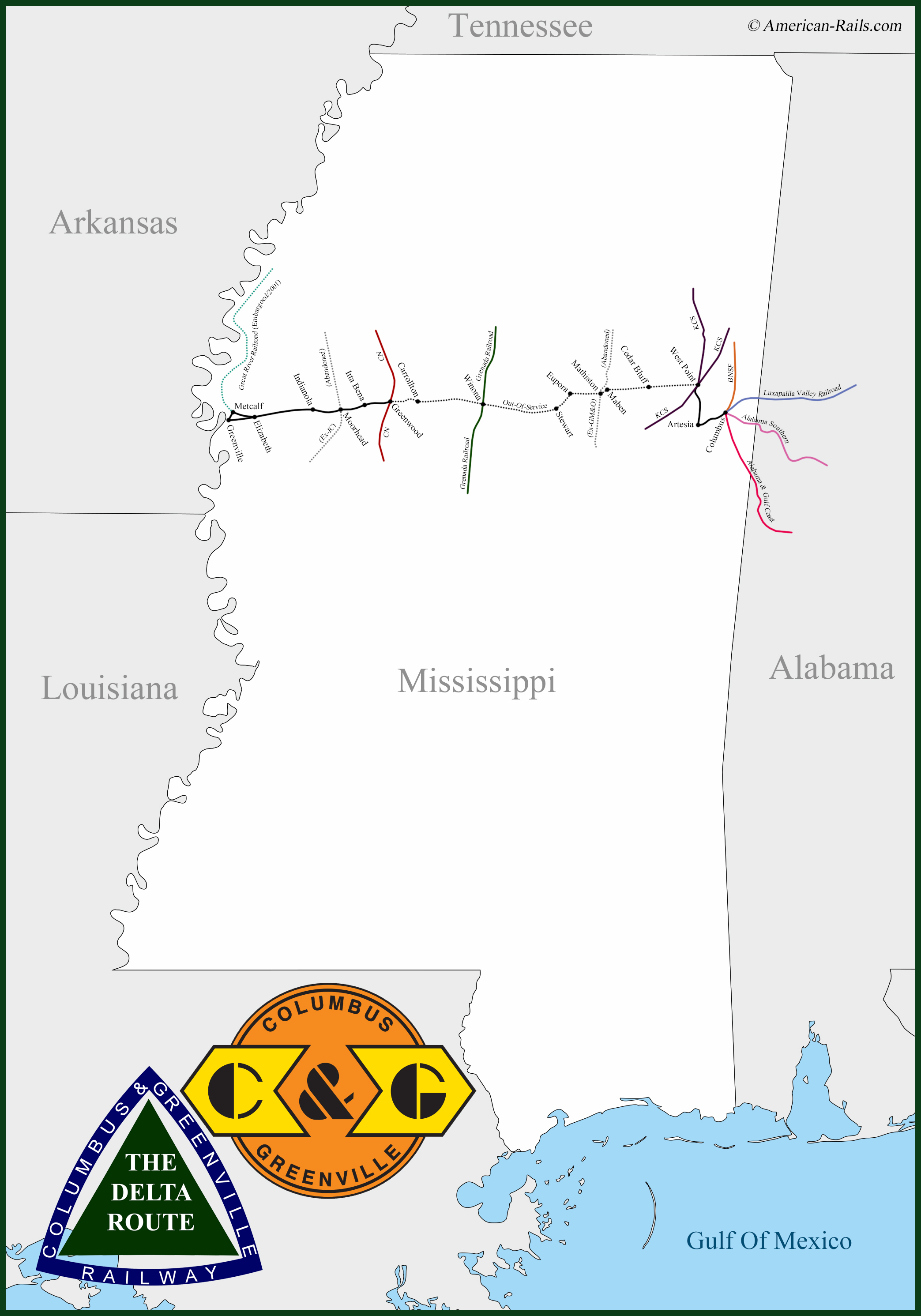 The ownership and name of the railroad also changed to Georgia Pacific Railroad in 1889. A through Pullman sleeping car was operated on this train for many years.

In 1912 the Southern Railway in Mississippi enlarged the station building with a fifty foot addition on the rear and completely remodeled the building.

They removed the “fortress” wall tops and added roof overhangs all around the building to the basic present look of the building.

On November 6, 1920 the Southern Railway in Mississippi changed the name to Columbus and Greenville Railroad. 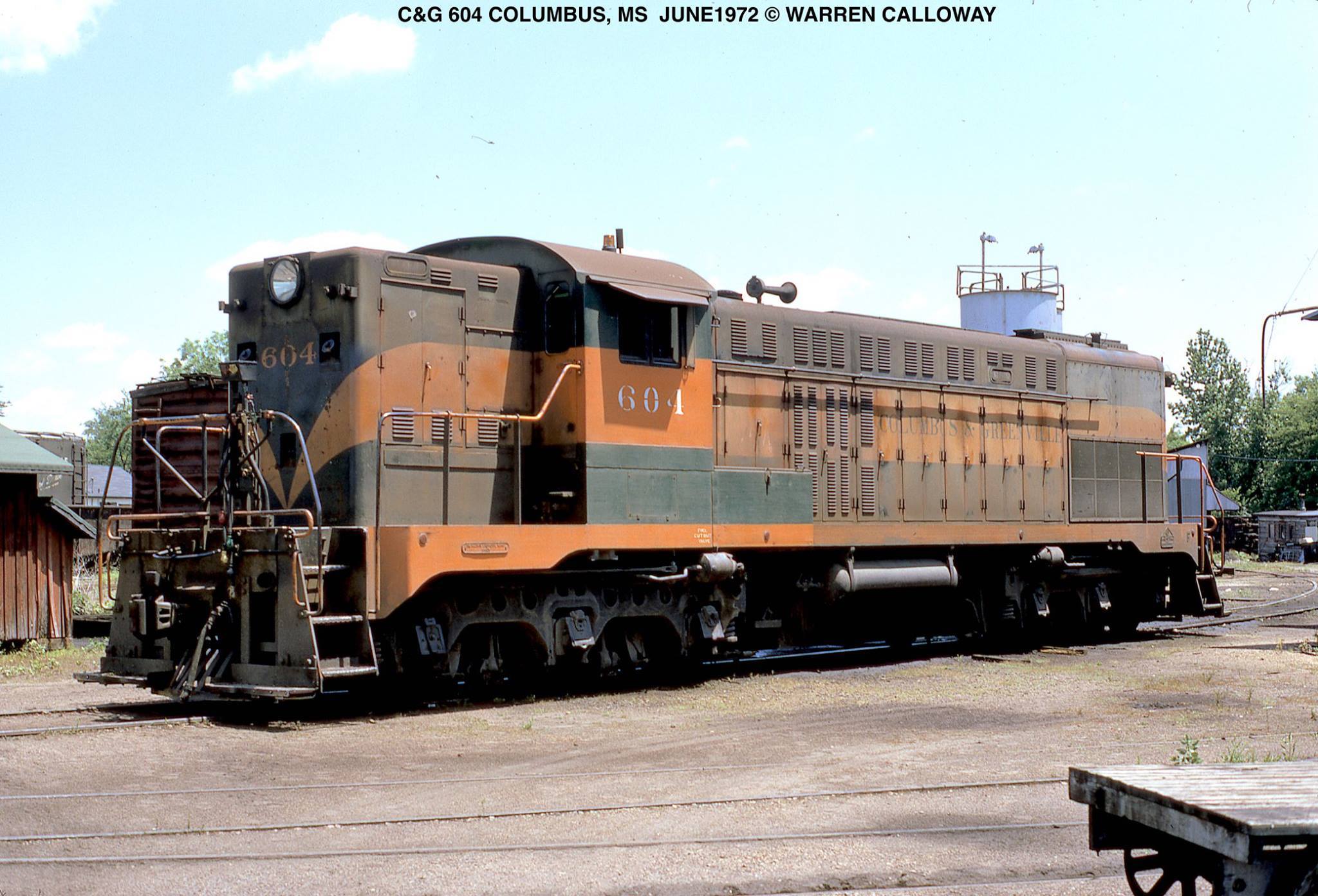 The last run of the Deltan was July 15, 1948. All scheduled passenger service ended in 1949 although special passenger trains were still run. 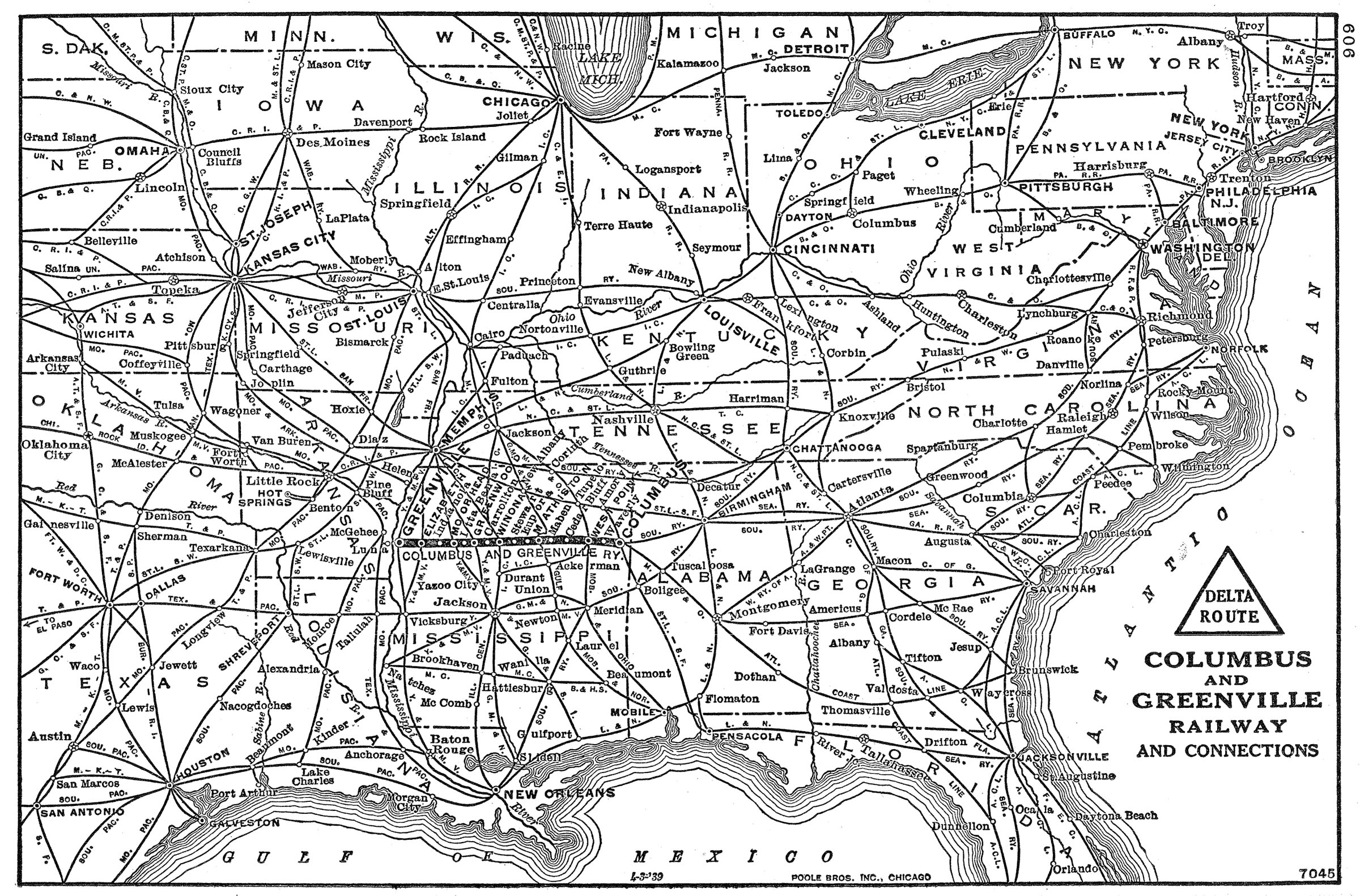 The last “Special” was a football special from Columbus to Greenville and back in 1957. The Stovall family operated the railroad until it was taken over by the Illinois Central Gulf Railroad on September 29, 1972.

The Illinois Central Gulf, also formed in 1972, was a massive system (for its time), controlling much of the trackage in the center of the country along the Mississippi River between Chicago and the deep south near New Orleans. 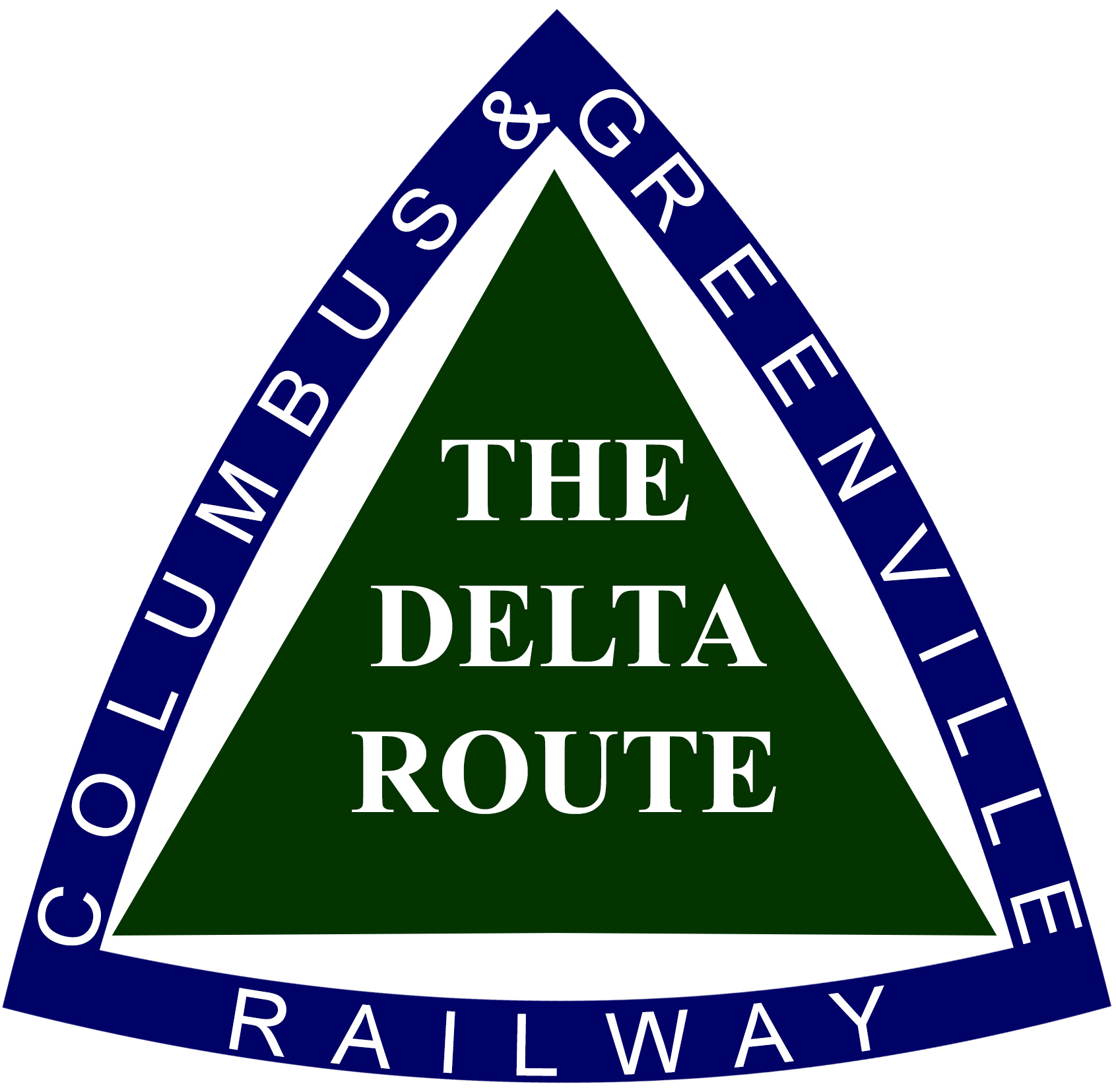 It consisted of the Gulf, Mobile & Ohio and Illinois Central railroads, which both operated in the same regions and served many of the same markets. Similarly, both railroads were unique in that they operated north-south main lines instead of the more traditional east-west systems.

On October 30, 1975, a group of local investors purchased the railroad and operated it as the Columbus and Greenville Railway. 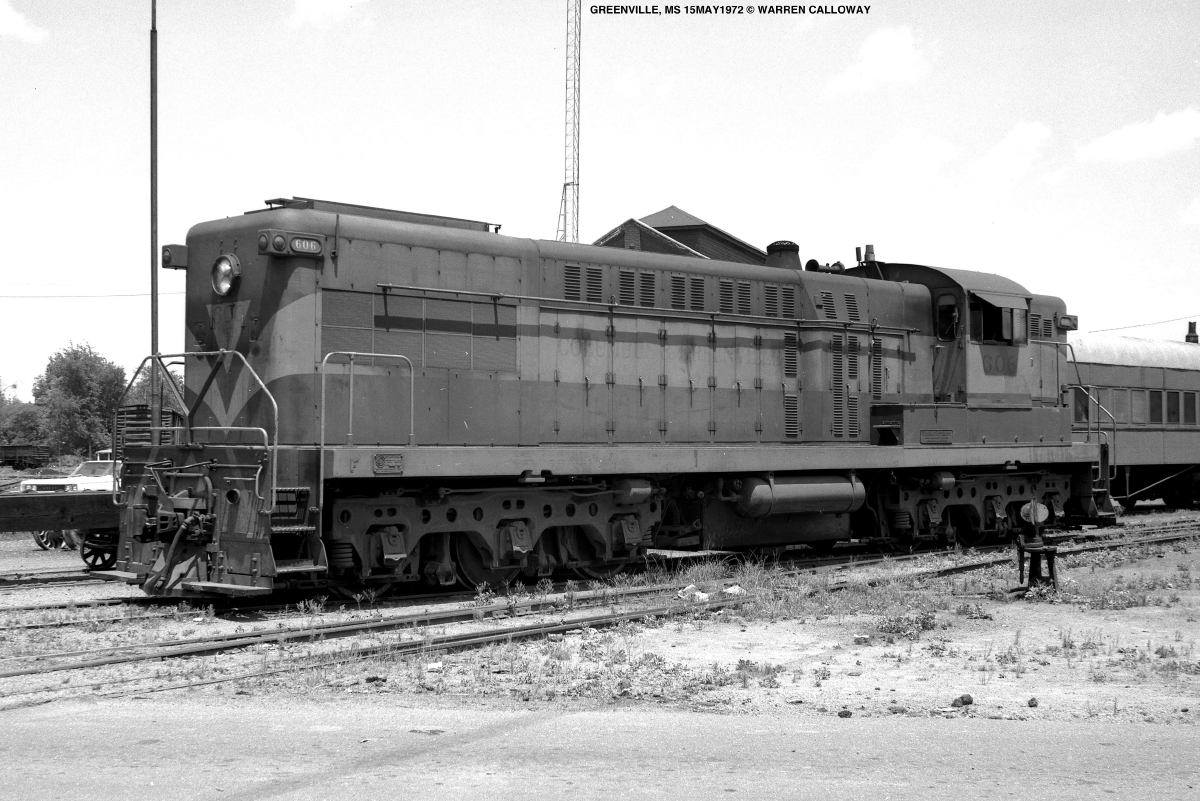 The railroad continues to operate today as the Columbus and Greenville Railway although ownership changed in July, 2008, to Genesee and Wyoming, Inc., which owns and operates railroads in the United States and other countries as well.

Most information on this page is courtesy of Harold Holiman.