One of the Southern Pacific's most scenic corridors was its Shasta Route running from northern California, through Oregon, and terminating at Portland.

There were two notable trains serving this line during the 20th century; the Cascade launched during the 1920s followed by the newly streamlined Shasta Daylight after World War II.

The former would eventually gain lightweight status but since the train operated on an overnight schedule passengers did not have the opportunity to experience as much of the Pacific Northwest's beauty as those traveling aboard the Shasta.

By the late 1950s the Espee was losing interest in passenger service and began cutbacks across much of its fleet, which included the Cascade during the 1960s.  A semblance of the train survived until Amtrak, which still provides service along the route. 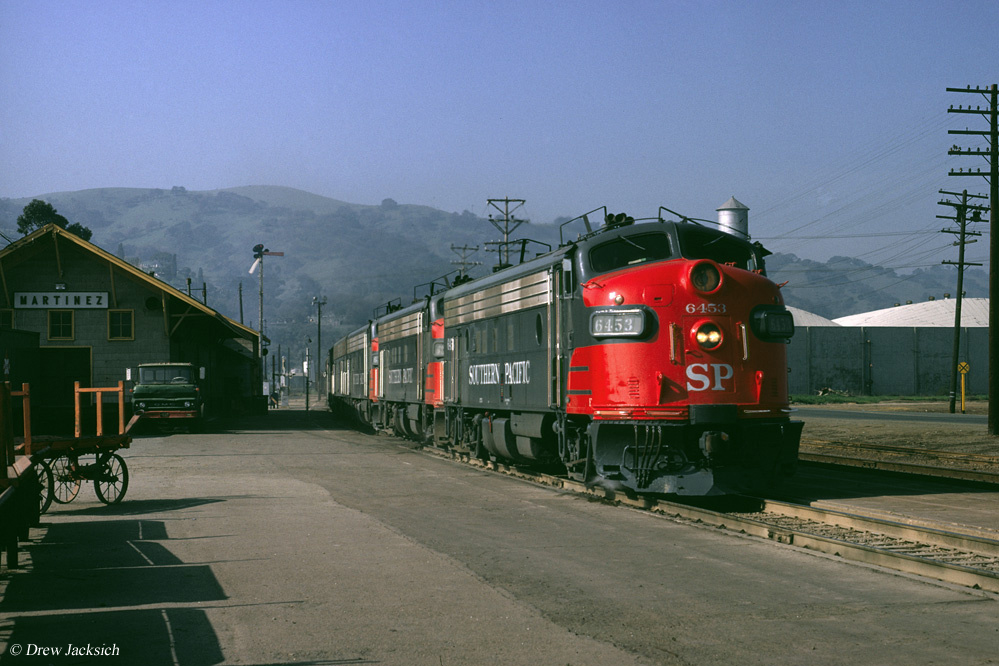 After the Southern Pacific upgraded its corridor north of Dunsmuir, California with the completion of the Cascade Line (also known as the Natron Cutoff it ran via Klamath Falls and Cascade Summit in Oregon) in 1926 the railroad could offer passenger schedules nearly 4.5 hours faster than over the older Siskiyou Line.

These trips normally required 42 hours for trains to make the Oakland - Portland run.  The very first notable train SP offered to the Pacific Northwest was the Oregon Express of 1887 running northbound and the California Express southbound.

A little over a decade later the railroad introduced the Shasta Express in 1901, later renamed the Shasta Limited.  The Cascade was inaugurated on April 17, 1927, about a year following the completion of the Natron Cutoff with first-class accommodations via heavyweight equipment and through sleepers available to Seattle over the Northern Pacific.

Southern Pacific's "Daylights" And Other Services

Golden State:  (Los Angeles - Chicago via Tucumcari in conjunction with the Rock Island)

Imperial: Operated between Los Angeles and Chicago in conjunction with the Rock Island.

A History Of "The Friendly Southern Pacific"

When Espee began considerably modernizing its passenger fleet with more lightweight equipment after World War II the Cascade truly came of age.  During 1949 the railroad added the all-new, streamlined Shasta Daylight to its fleet of popular Daylights.

The train, which ran on a daytime schedule, offered a far-ranging level of first-class accommodations from chair cars to a parlor observation and unique three-car, articulated diner-kitchen-coffee shop car.  Later, home-built, dome-lounges were added to the consist.

Along the way passengers were treated to sights of the Cascade Mountain Range, Lake Odell, glimpses of Mount Hood, and Crater Lake.  The Cascade was upgraded to streamlined status about a year later with equipment from Pullman-Standard.  Inaugurated on August 13, 1950 it was powered by Electro-Motive E7s, and then later pulled by Alco's beautiful PA diesels.

Sticking to Southern Pacific tradition, as an overnight train the Cascade was not adorned in the railroad's beautiful Daylight livery (except for the locomotives).  Instead, similar to the Lark (the overnight run between Oakland/San Francisco - Los Angeles), the train was clad in a unique two-tone grey scheme.

Despite the Cascade's late-night status it was nearly on par with the Shasta offering a 16 1/2-hour schedule along the 718 mile corridor between Portland and Oakland.

Additionally, its all-Pullman accommodations including sleepers in all of the popular arrangements (bedrooms, roomettes, compartments, and drawing rooms) with the most notable feature being a unique, three-car articulated kitchen-diner-lounge known as the Cascade Club (a similar setup operated on the Shasta).

(The below Cascade timetable is dated effective January 15, 1954.)

In all, the train (listed on the timetable as #11, southbound, and #12 northbound) ran originally with a 13-car consist (a baggage, Railway Post Office, three sleepers, the Cascade Club, and additional five sleepers).

Before the Espee took such a hardline approach to its passenger trains the railroad provided some of the most memorable and luxurious accommodations throughout the West.  Its advertisement (featured above) describing the new Cascade made sure to mention these first-class services:

"It will be just an overnight luxury jaunt between San Francisco and Portland via the faster, streamlined, Cascade!"

Interestingly, the train's all-Pullman status was very brief as by October of 1950 a pair of coaches began running within the consist although neither ran through to Seattle.

As the public left the rails for highways and airlines in increasing numbers throughout the 1950s Southern Pacific grew disenchanted with passenger trains by the end of the decade.

In 1959 it cutback the Shasta Daylight to a thrice-weekly schedule during the off season and five years later during 1964 reduced the once-proud train to a summer season-only operation.  In 1967 SP discontinued it altogether.  The Cascade fared a bit better but also saw its share of service reductions.

By the 1960s the train had lost its interesting two-tone grey livery, replaced by an all-aluminum look with red trim (diesels were also reduced to an uninspiring grey and red livery).  During 1966 through sleepers to Seattle were shed and a year later the widely popular three-car, articulated Cascade Club sadly came off.

In 1970 the Cascade was reduced to a thrice-weekly schedule, in which it remained until the start of Amtrak on May 1, 1971.  Southern Pacific had attempted to end dining service on the train during the 1960s, replaced by vending machines, but was disallowed by the Oregon Public Utility Commission.

It also tried to discontinue the train several times but was thwarted from doing so.  During its final years the Cascade continued offering a diner-lounge, chair cars, and sleepers with roomettes and bedrooms until the end while porter service was also still available which is somewhat incredible considering SP's stance during those years.