The "Centipede," technically listed by Baldwin as a DR-12-8-3000 or DR-12-8-1500/2, was perhaps the most unique diesel-electric locomotive concept ever developed.

Constructed during the 1940s, the radical design was more on par with electrics given the Centipede's unique 2-D+D-2 wheel arrangement.

Surprisingly, several units were built for a handful of railroads.  Seaboard Air Line is credited with the initial idea for what became the Centipede (so named for its numerous axles).

As John Kirkland points out in his book, "The Diesel Builders: Volume Three (Baldwin Locomotive Works," SAL management wanted a locomotive with smooth riding characteristics that could produce 6,000 horsepower via two units instead of the conventional three then in production by American Locomotive and Electro-Motive as A-B-A sets.

Today, none of the 52 Centipedes built for Ferrocarriles Nacionales de México (NdeM), Pennsylvania, and Seaboard Air Line are preserved.  In addition, the two demonstrators, which never sold, were also scrapped.

From a historical standpoint it is a true shame considering their distinctive nature and importance in diesel locomotive development.

An extant example, especially if one was actually in operable condition, would draw considerable crowds and attention. 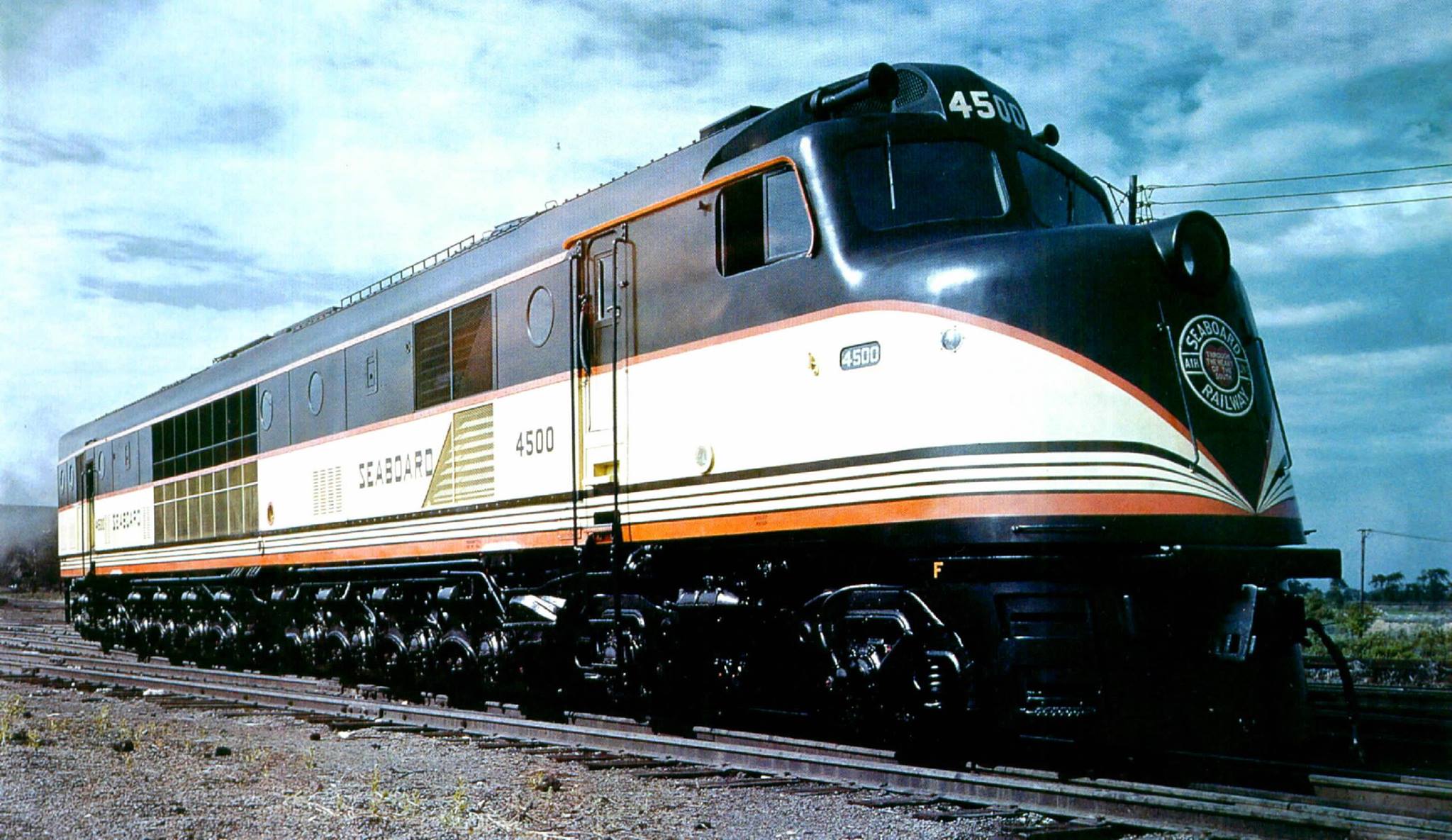 Seaboard Air Line DR-12-8-3000 "Centipede," #4500, is seen here in Florida during early December of 1945, shortly before entering service between Jacksonville and St. Petersburg. This unit was rebuilt from the original #6000 demonstrator.

Contrary to popular belief, the Centipede was not designed as a drag service locomotive.  Instead, its heritage can be traced back to the end of World War II and "The Claymont Tests."

In 1945, railroads were looking to complete dieselization of their top passenger trains which, in turn, would allow for faster schedules.

There was only one problem; the heavy wear and tear of the war effort had resulted in many rights-of-way needing significant overhaul.

This deferred maintenance could be felt in the rough ride of four, and even six axle locomotives.  To remedy this issue, and simply establish a better ride quality, the Pennsylvania Railroad launched the "Claymont Tests" in Claymont, Delaware.

This electrified test track led to the development of the fabled GG-1, one of the most reliable and smoothest-riding locomotives (diesel, electric, or steam) ever built.  Baldwin would go on to produce a majority of these units.

The Seaboard Air Line was particularly interested in the goings-on at Claymont.  However, without the funds or interest in upgrading its property to electrification, SAL's management was focused on a diesel-electric variant.

As Mr. Kirkland's book notes, in 1944 Seaboard's brass was touring Baldwin's Eddystone plant when they came across a stored test-bed unit, 2-D+D-2 demonstrator #6000.

This locomotive had originally began development in May, 1940.  In 1942, the War Production Board gave the go ahead for its completion.

The locomotive was designed for passenger service from the start; it would incorporate eight, 750 horsepower De La Vergne engines (model 408) for a total of 6,000 horsepower.

Baldwin, however, also had a freight variant drawn up but never actually produced a demonstrator.  The locomotive would have boasted 4,500 horsepower but lower gearing for greater tractive effort.

Unfortunately, delays and rising costs led to Baldwin stopping work on #6000 in the spring of 1943 after only four engines had been installed.  On May 28th that year she was deemed "complete" and tested on the Pennsylvania, Reading, and Baltimore & Ohio around Philadelphia.

These tests were successful and the locomotive proved an efficient power plant.  However, Baldwin realized the design could not make a profit in its as-designed configuration.

Essentially, it was "too powerful," lacking the redundancy and flexibility of similar 6,000 horsepower passenger locomotives offered by Electro-Motive and Alco as stand-alone, A-B-A configurations (2,000 horsepower each).

Baldwin's original, experimental DR-12-8-3000 "Centipede," #6000, manufactured in 1943 and designed to carry eight, 750-horsepower De La Vergne engines. Only four were ever installed and the unit was later rebuilt as the original Centipede demonstrator, which became Seaboard Air Line #4500.

As such, Baldwin abandoned the concept and placed #6000 in storage until SAL management came across the locomotive the following year.

Seaboard was interested in a slightly modified version that would feature the same wheel arrangement for a smoother ride, only de-rated as 3,000 horsepower units operating in tandem.

In this way, as individual units or semi-permanently coupled,  Seaboard believed operating costs could be reduced by eliminating the need for an additional locomotive.

It entered passenger service on December 13, 1945 between Jacksonville and St. Petersburg, Florida and with a gear ratio of 21:58 could operate at speeds up to 93.5 mph.

Seaboard was satisfied with the result and ordered thirteen more Centipedes.

In railroad parlance, the 2-D+D-2 arrangement is based from the electric classification system where: 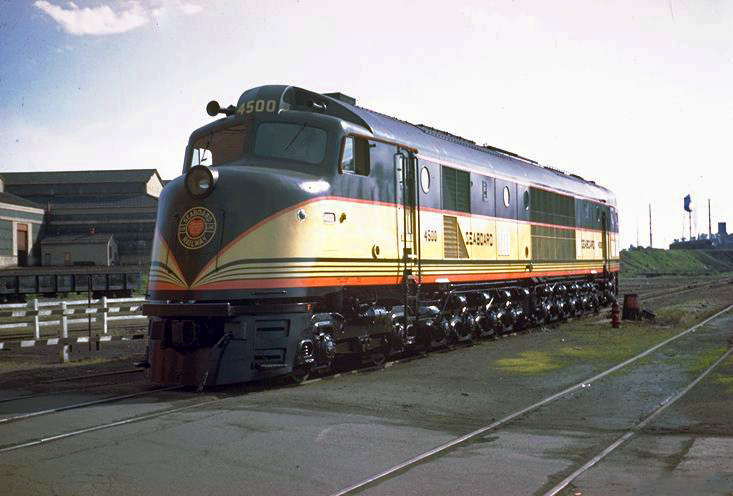 A Baldwin photo of new Seaboard Air Line DR-12-8-3000 #4500 at the manufacturer's plant in Eddystone, Pennsylvania following its completion on December 3, 1945. It entered service between Jacksonville-St. Petersburg, Florida on December 13, 1945.

Using Baldwin's rating system, however, the Centipede was a DR-12-8-3000. Breaking down the designations:

Other railroads soon took notice of the new concept and interest was immediate.  Baldwin's ever-loyal customer, the Pennsylvania Railroad, ordered 12, semi-permanently coupled pairs for what was actually a total of 24 individual units (later renumbered individually as 5811-5834).

There were also orders placed by Ferrocarriles Nacionales de México (National Railways of Mexico) for 14 units and, finally, Union Pacific ordered a pair that was later canceled.

Baldwin went on to complete what was to become Union Pacific #998-999 in March, 1948 and showcased them as demonstrators #6000 (2nd) and #6001.  They were never sold and eventually parted out for other projects. 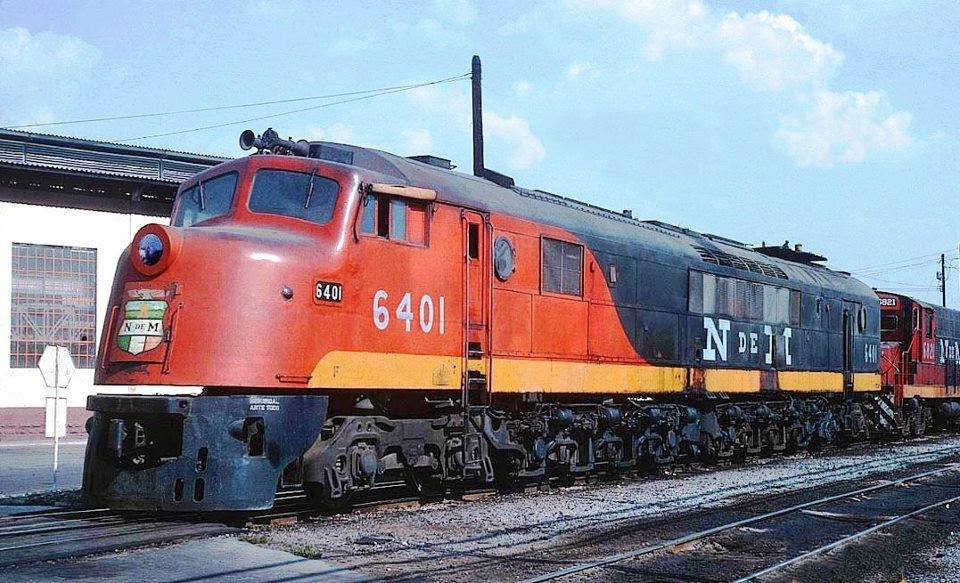 Kirkland makes a strong case that the Centipedes were not a failed design and proved satisfactory for the service they were intended.

In addition, contrary to what is often stated in railfan circles, Baldwin offered these, and all locomotives, with optional dynamic brakes and multiple-unit (MU) capability.

As it turns out, PRR's complaint that the locomotives tracked poorly and suffered derailments was largely a result of the railroad operating them in a capacity for which they were not ended, as pushers in freight service handling westbound consists over Horseshoe Curve between Altoona and Gallitzin, Pennsylvania.

In 1951, PRR dropped their drawbars for couplers and re-geared the locomotives for freight operation; at a 15:63 ratio they could operate at speeds up to 65 mph providing 85,600 pounds of continuous tractive effort at 10.5 mph.

The Centipedes were designed to operate at the head-end of any consist.  By placing them at the center, or rear, of a freight train they exerted far too much torque and power for the cars, or outside rail of a curve, to handle.

In this case there were frequent derailments and jack-knifing incidents.  Interestingly, during the time Centipedes led PRR passenger trains, no such issues were experienced.

In addition, the Seaboard never suffered similar issues since their fleet had never been used in pusher service.

The PRR's also complained about the difficulty in replacing brake shoes.  Interestingly, the Pennsy operated a large fleet of various straight-electrics featuring a similar number of axles, such as its large fleet of GG-1's.

These locomotives never had an issue with brake shoes. In this case, the railroad boasted maintenance shops with inspection pits to easily replace the shoes and carry out other work on the running gear.

The PRR never built such facilities for the Centipedes; the Seaboard did, and never had problems with shoe replacement.

While all of the supposed issues with the DR-12-8-3000 have largely been either railfan conjecture or dispelled myths, the locomotive was not without its faults.

The Centipede was, quite frankly, a special service design.  As such, its performance declined when not used as intended; in this case at the head-end of passenger trains.

Baldwin had spent a great deal of research and development on the Centipede, and also had the added advantage of workable data with demonstrator tests and units purchased by the above-mentioned railroads.

Given enough time, the builder would have almost certainly corrected any issues of the Centipede being used in freight applications, if any railroad had expressed interest.

From a historic standpoint, the Centipede's supposed shortfalls have only been noted by railfans; many railroads at the time were actually quite interested in the design.

Finally, Baldwin had even collaborated with the Denver & Rio Grande Western on a dual-application, freight version that could operate as either a diesel or straight electric. 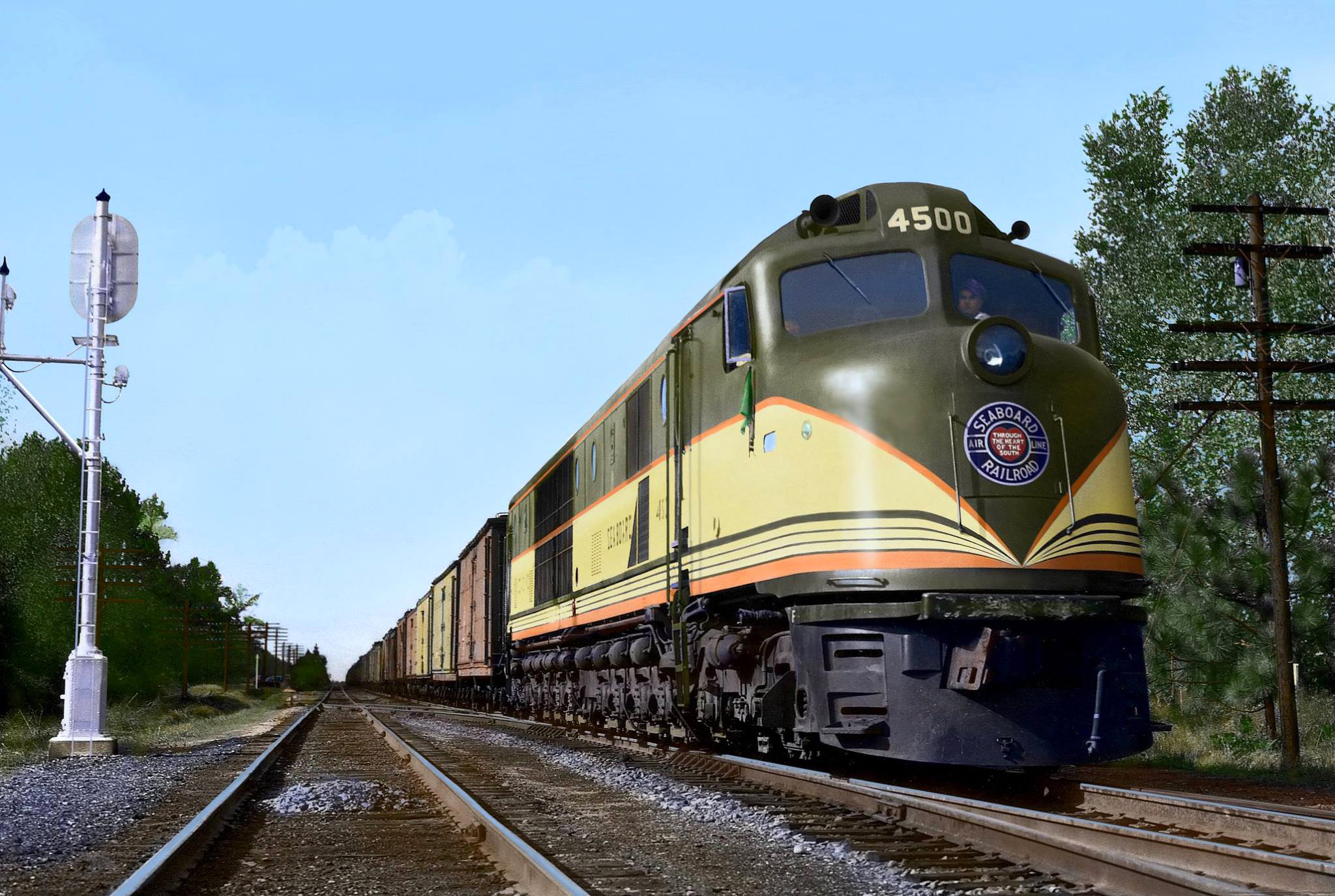 One of the Seaboard's rare DR-12-8-3000 "Centipede's" has a block of a reefers in a scene that probably dates to the late 1940s or early 1950s. Wiley Bryan photo/Warren Calloway collection/Tom Alderman colorization.

As the Centipede was in production, the D&RGW took interest in the locomotive and contemplated electrifying its Moffatt Route from Denver to Bond, Colorado via Moffat Tunnel (129 miles), as well as 54-miles in Utah between Thistle and Helper.

Somewhat similar to EMD's later FL9 concept, the Baldwin/Westinghouse locomotive was to feature all-powered axles in electrified territory (B-D+D-B) whereby the leading and trailing axles would not be powered in the diesel-electric configuration.

The locomotives would boast 6,000 horsepower as individual units, or 12,000 horsepower in pairs.  It was a fascinating concept but was never adopted.

There were many reasons why, but at the forefront was competitive headbutting between Westinghouse/Baldwin and American Locomotive/General Electric.

The latter, which would collaborate on the project, felt it would largely benefit Westinghouse/Baldwin since they would be the primary manufacturers of the locomotive.