Union Pacific's Challenger was a more affordable option to the City of Los Angeles as both passenger trains operated over the same route, connecting Chicago with Los Angeles with the help of the Chicago & North Western (until 1955) between Omaha, Nebraska and Chicago.

As with the other west coast trains like the Los Angeles and City of San Francisco, this streamliner proved to be a very successful operation for at least 20 years although by the late 1960s the train had been combined with several others essentially ending its run.

The train had ebbed and flowed as part of UP's fleet, although it remained a permanent fixture on its timetable by the mid-1950s.  It was discontinued a final time following the start of Amtrak.

Union Pacific is known for many historical aspects of American railroading.  Perhaps most notable is completing the eastern leg of the Transcontinental Railroad.

Into the streamliner era it earned national acclaim for its first-class City fleet, often taken by celebrities and Hollywood's elite to and from Chicago. 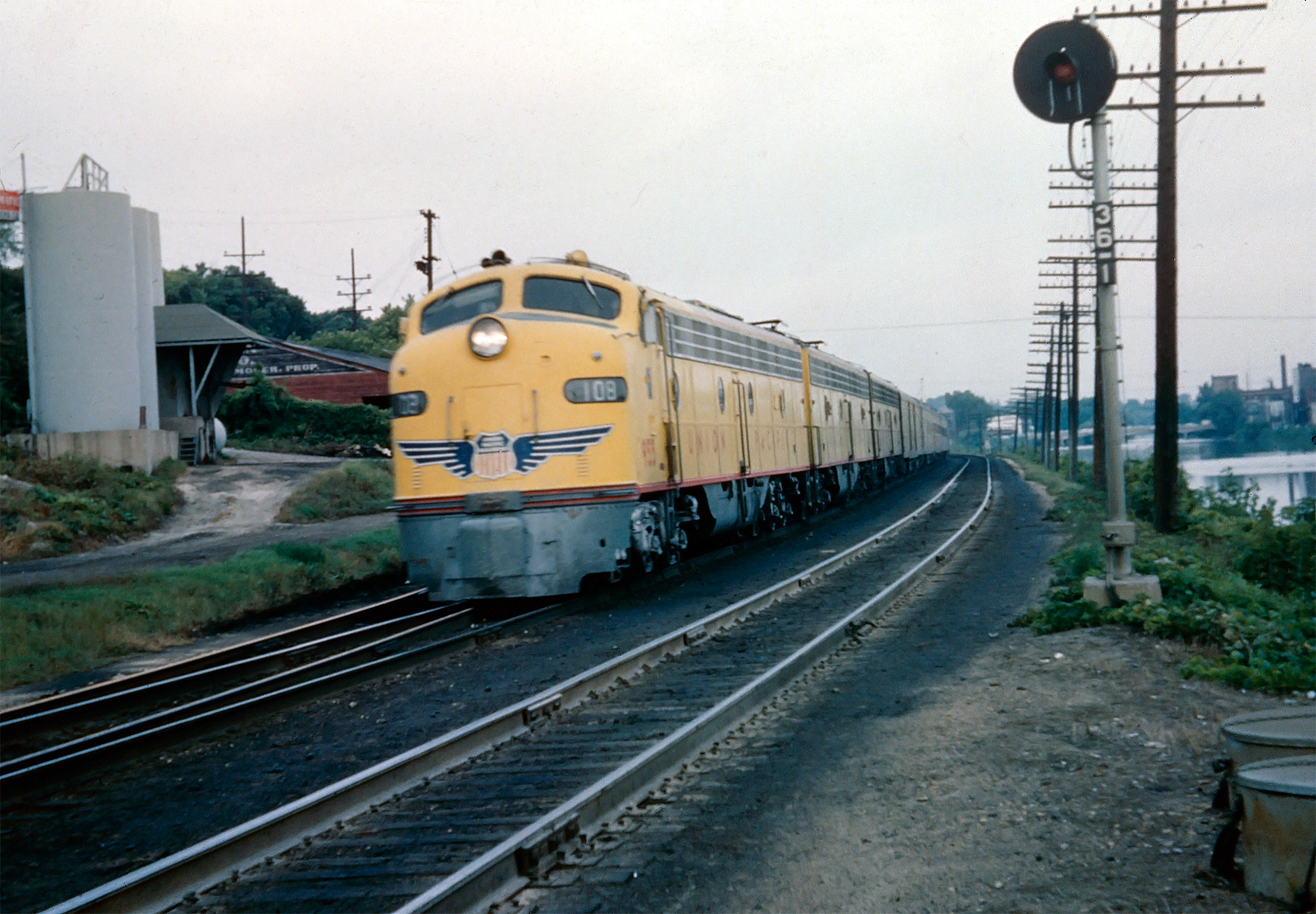 Union Pacific E9A #955 is ahead of train #108, the eastbound "Challenger," operating over the Milwaukee Road east of Elgin, Illinois on August 15, 1956. American-Rails.com collection.

Union Pacific, the largest and one of the most powerful railroads in the country, has been with us since 1862.

Since it began service all of those years ago the railroad has become not only one of the most highly respected institutions in the nation but also has seen nearly every major railroading event in our country’s history, and accordingly has a very long and storied history.

Its City fleet is credited as being the first lightweight streamlined passenger trains to operate in the United States.

In 1934 the City of Salina, the first in the fleet, debuted as a three-car lightweight trainset that the Electro-Motive Corporation named the M-10000.

The Union Pacific was so impressed with the train, and the response it received from the public, it purchased seven more sets and the City fleet was born! 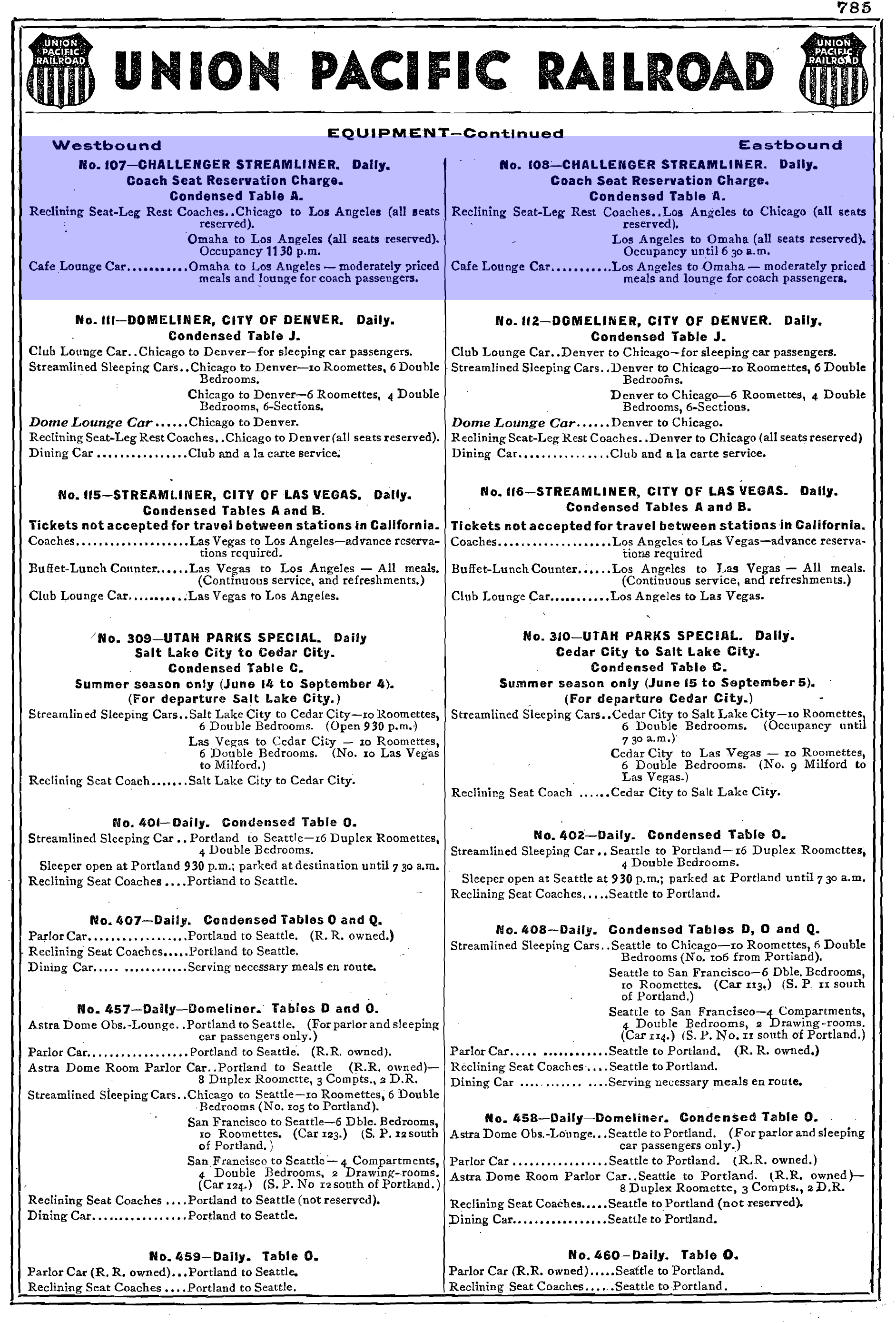 The City fleet became revered throughout the west and rivaled the Santa Fe’s legendary Super Chief, and every other western passenger train, in exquisiteness and fine traveling. Once the trains received their Domeliners in the mid-1950s they became the lavish way to travel for many in Hollywood.

The Challenger began operation in 1935 as a heavyweight train although its affordability made it so popular that soon afterward its equipment was updated (with rebuilt equipment) and featured reclining-seat coaches, diners, sleepers, and lounges.

Much of the train's equipment came from discontinued runs like the Los Angeles Limited, which had since been upgraded to lightweight streamliners. 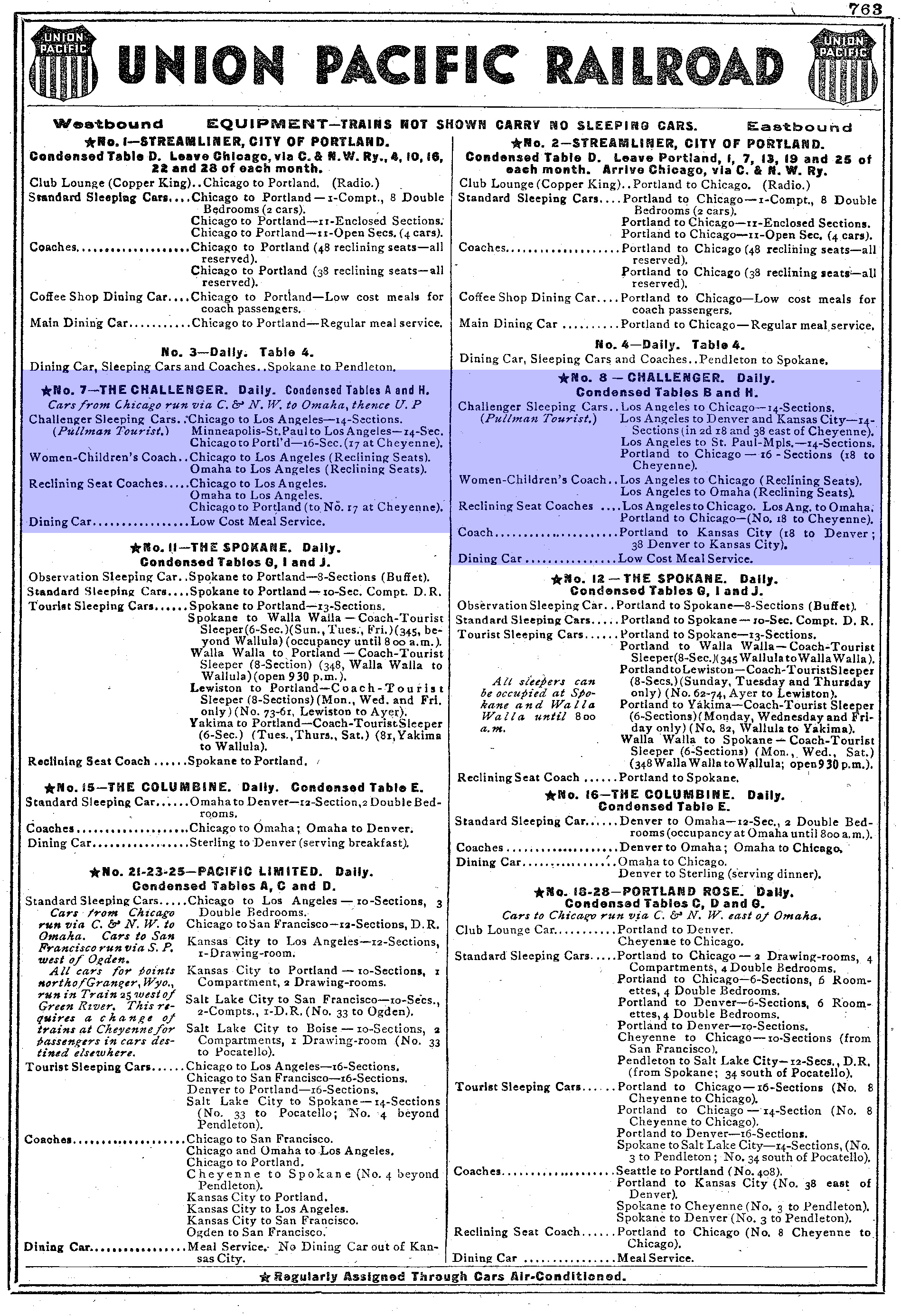 The train was operated in conjunction with the Chicago & North Western between Omaha and Chicago with the Union Pacific carrying the train westward to Los Angeles.

A year later, in the spring of 1936 UP teamed up with the Southern Pacific to offer patrons the availability to ride between Ogden and Oakland/San Francisco known as the San Francisco Challenger.   Interestingly, the streamliner was discontinued in 1947 due to lack of lightweight, streamlined equipment for the train.

However, its discontinuance was short-lived and by 1954 the train was back, this time sporting lightweight cars of its own built by both Pullman-Standard and American Car & Foundry.

Included within the consist was the fabled Domeliners (dome coaches) and observations along with the lounges, sleepers, and diners already provided previously with the train.

The train was discontinued or saw its name changed at various points.  Due to the increase in traffic of World War II a second train was added on December 31, 1944, the Furloughee Challenger.

The train was discontinued on June 2, 1946.  It remained off the timetable until the C&NW and Union Pacific announced on December 8, 1953 that the train would return with an all-streamlined consist.   This latest version made its inaugural run on January 10, 1954. 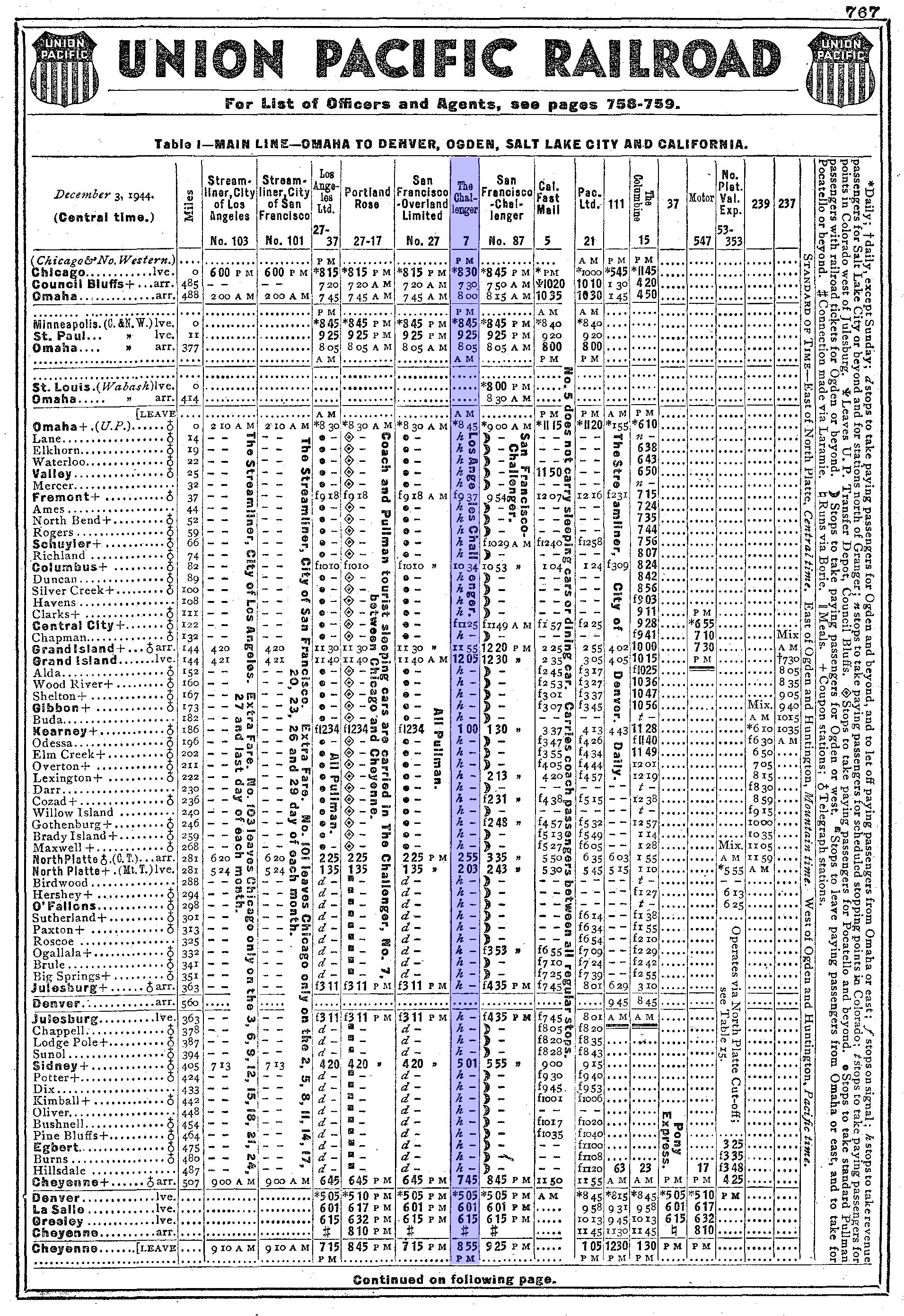 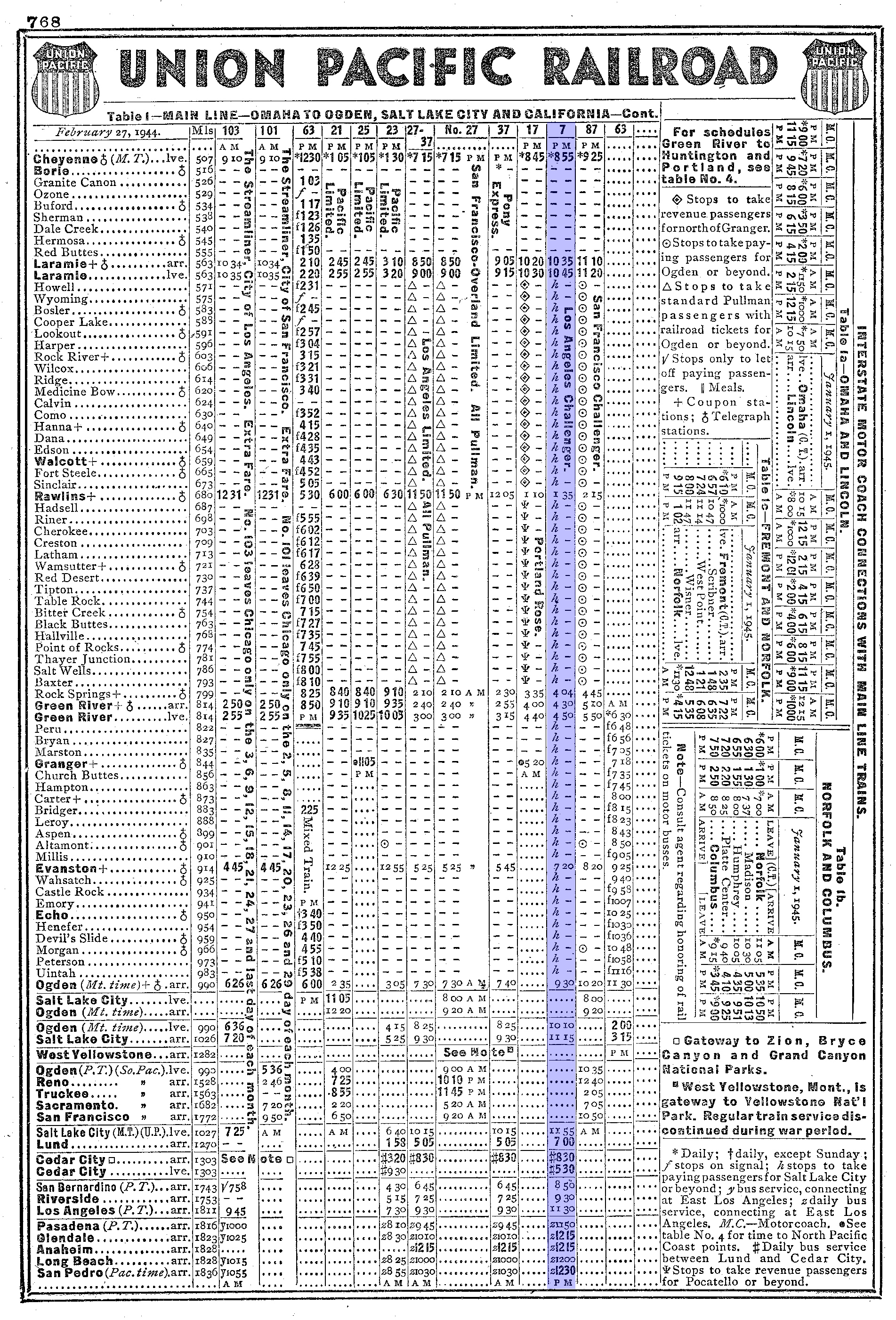 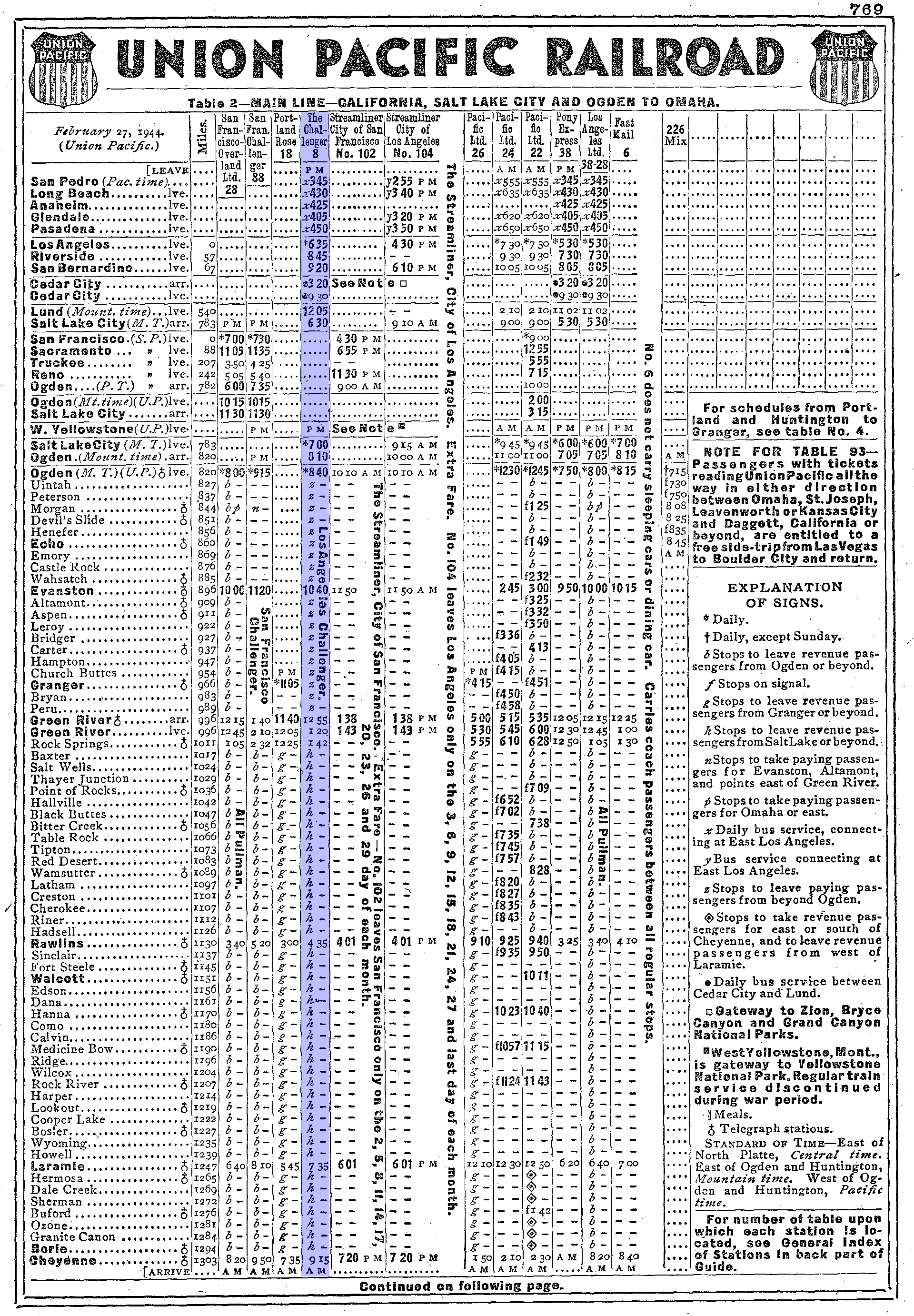 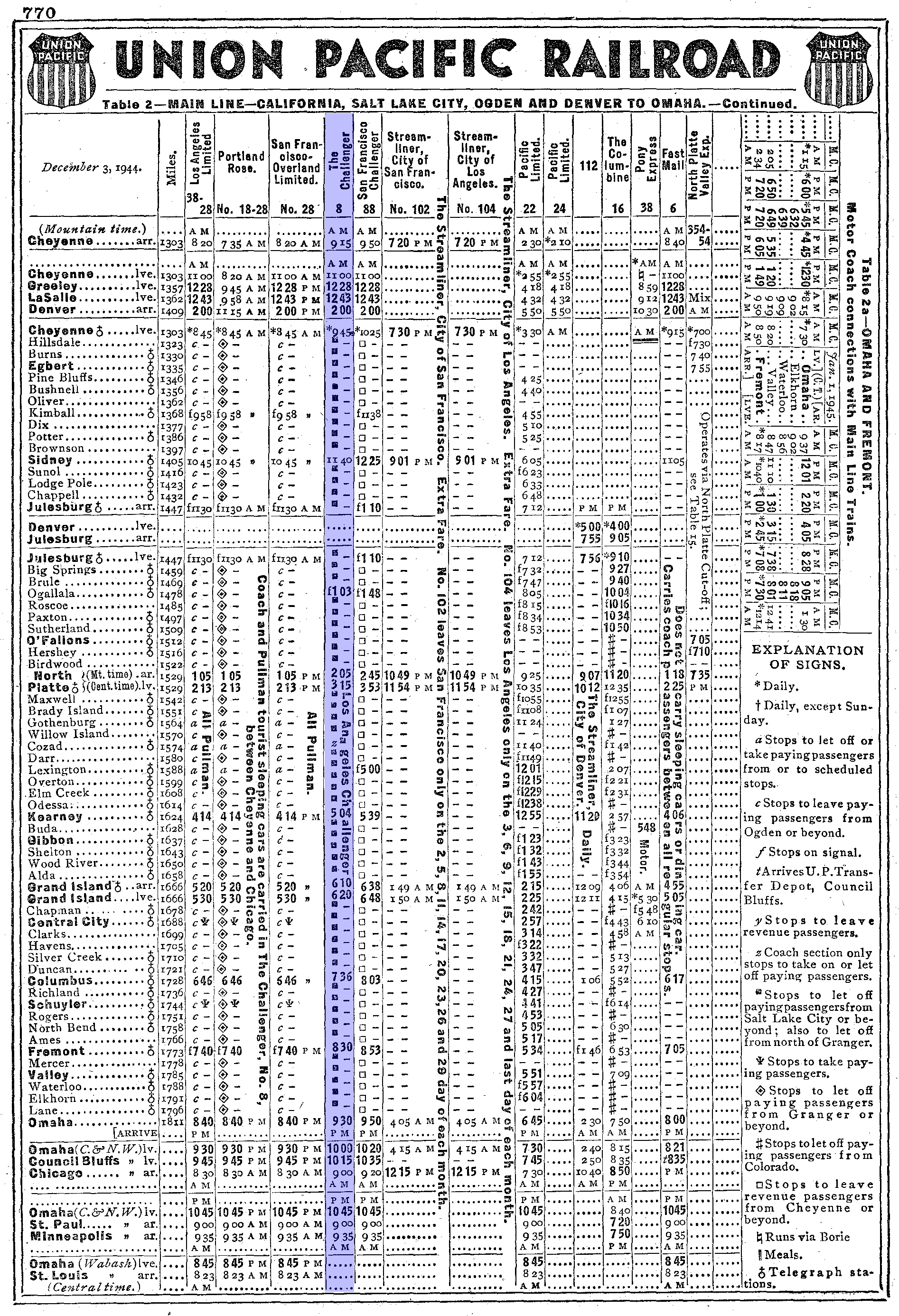 The C&NW's alliance with the Challenger, and for UP's entire City fleet, lasted until October of 1955 when the railroad became dissatisfied with the services C&NW citing declining transit times.

As a result the Milwaukee Road was approached and began handling Union Pacific's trains into Chicago, a partnership that would last until the Challenger was discontinued.

As had been the case during the C&NW's years, Milwaukee Road equipment was clad in matching Armour yellow with gray trim and red lettering.

The only way one could tell it was not Union Pacific equipment was by Milwaukee Road's name and logo. The end began as early as 1956 when it was combined with big sister City of Los Angeles during the off seasons. 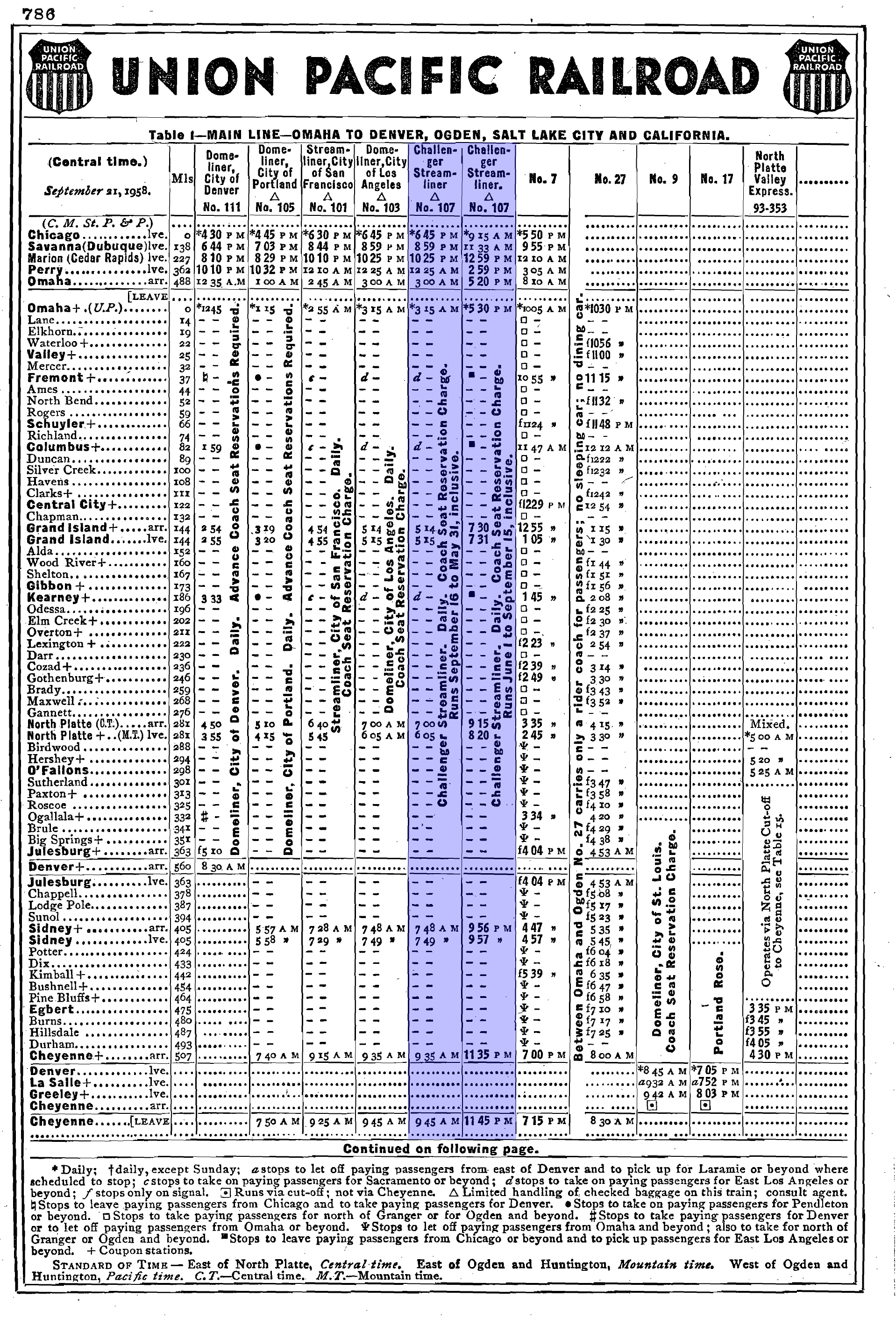 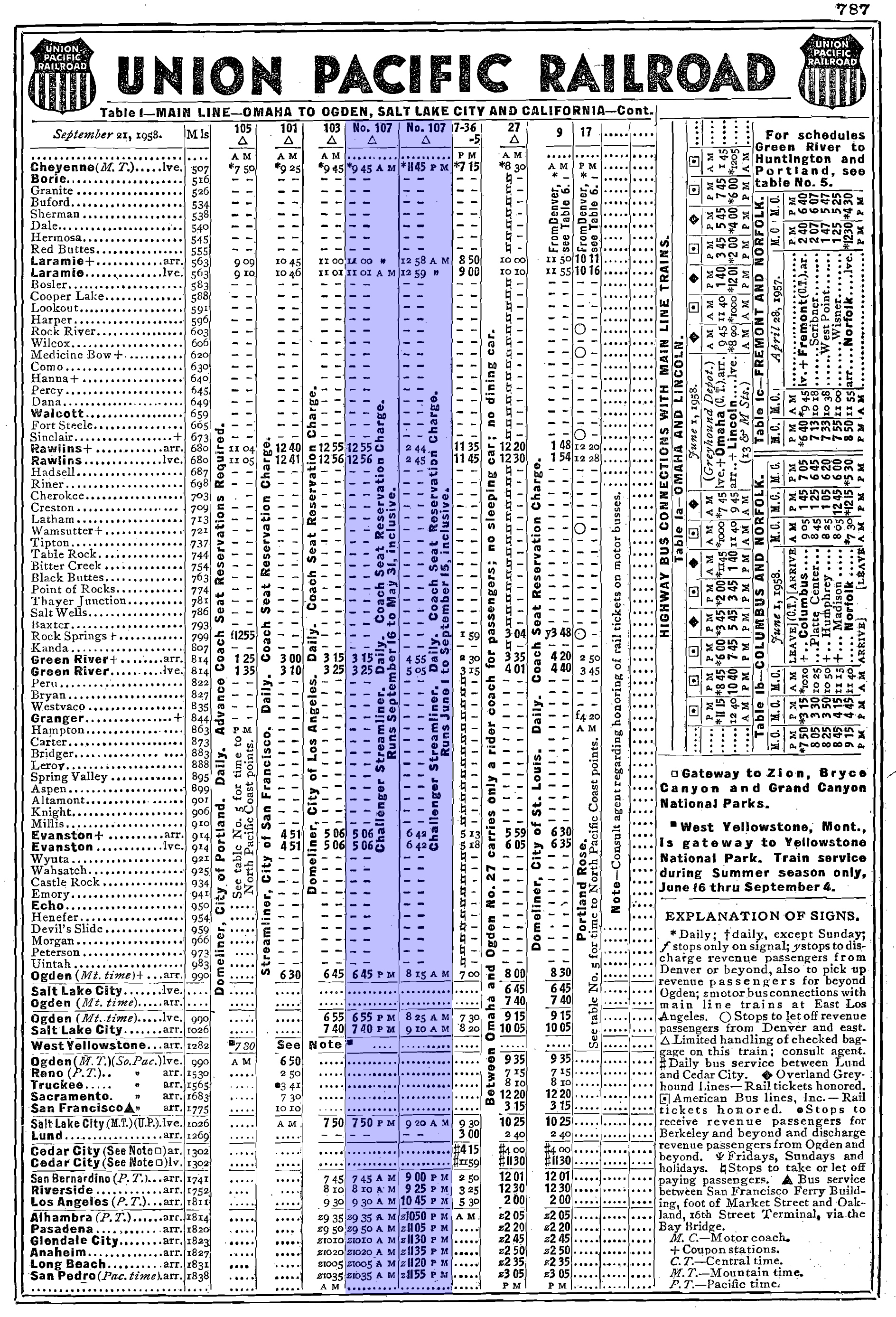 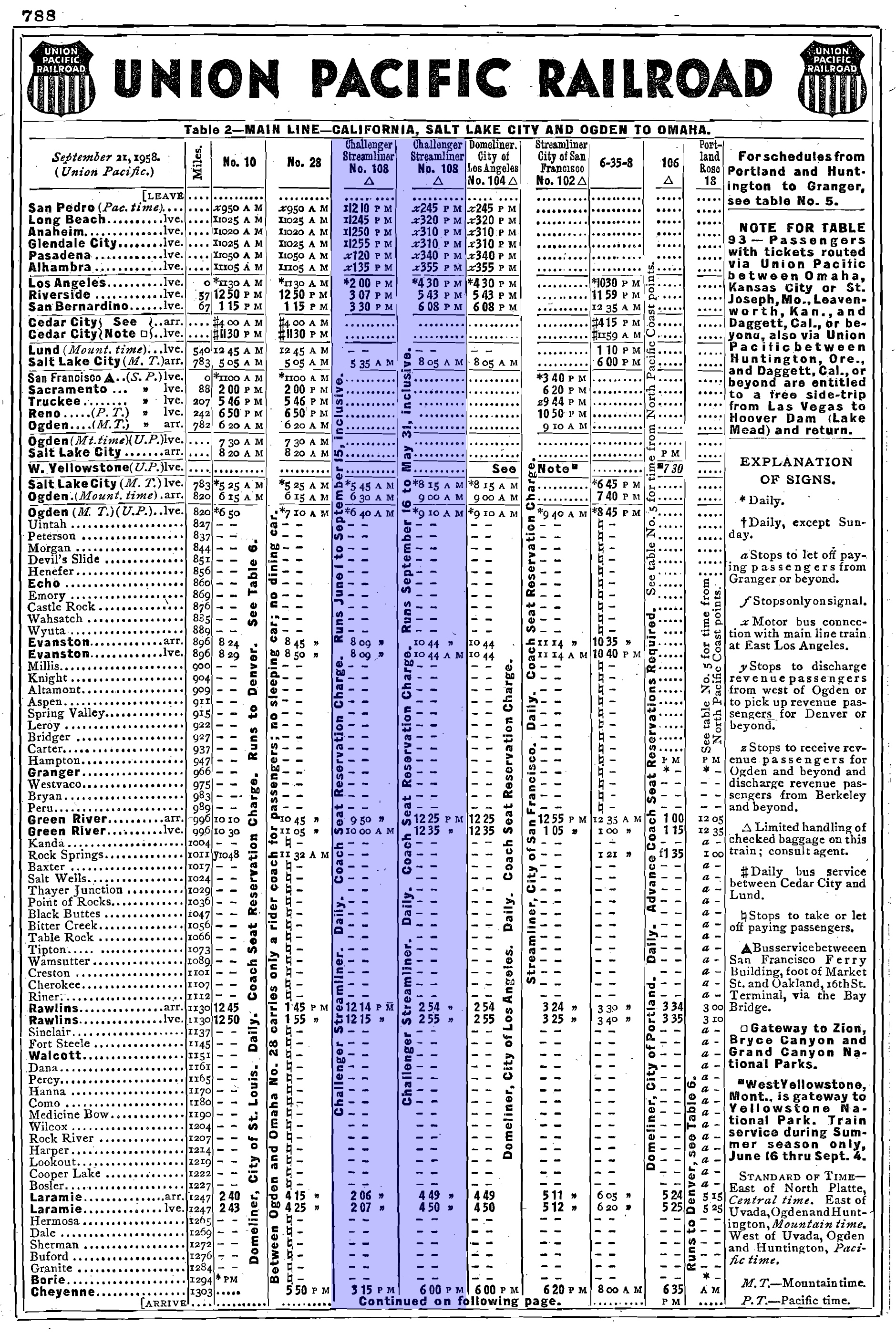 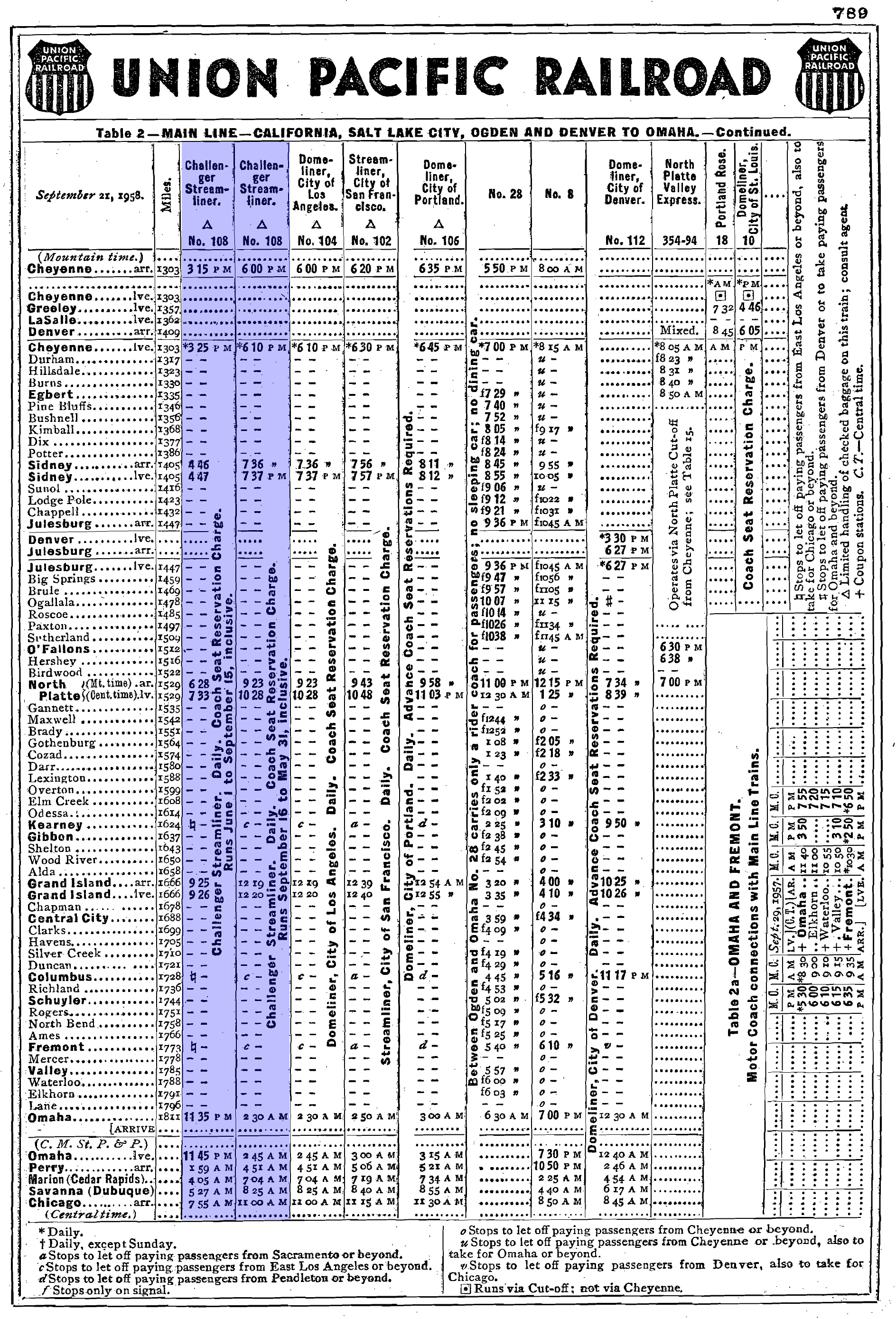 As patronage and passenger rail travel continued to wane the Union Pacific began combining most of its passenger fleet until the Challenger itself fell victim in the late 1960s.

In 1969 it along with the Los Angeles, City of San Francisco, City of Denver, and City of Portland were all combined into one giant consist the City of Los Angeles, east of Wyoming.

When Amtrak took over intercity passenger rail operations in May of 1971 it chose not to retain the name or any other Union Pacific train thus ending the railroad’s grand fleet of streamliners.

Today, you can still see what the City fleet would have looked like when UP operates its official business train, which still operates several pieces of original equipment, including the EMD E9s.