To keep pace the ACL inaugurated its own version in December of that year called the Champion. In conjunction with the Florida East Coast Railway the train provided daily service between New York and Miami.

The train featured a beautiful livery and because both the ACL and SAL served the very trendy vacation destination of Florida, their passenger trains to the Sunshine State remained popular through the late 1960s!

However, since both railroads’ flagship trains served essentially the same market when Amtrak took over intercity passenger train operations in the spring of 1971 it elected to keep the Silver Meteor only. The ACL and SAL were perhaps the only two railroads in the country to serve markets so highly demanded by passengers. 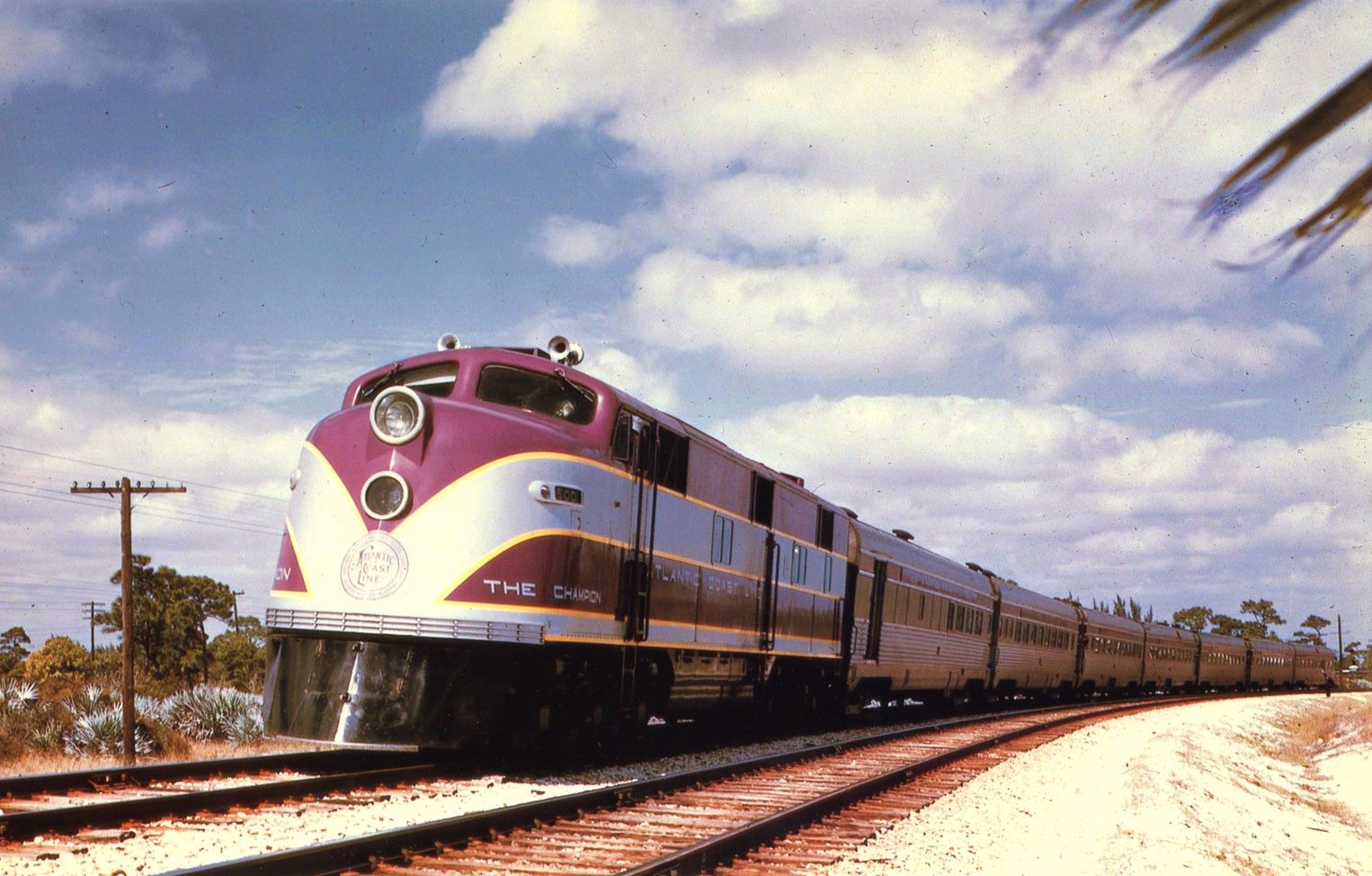 A publicity photo featuring the Atlantic Coast Line's all-new streamliner, "The Champion" (Miami - New York), running northbound near Lake Worth, Florida on the Florida East Coast in December of 1939. On point is E3A #500 (involved in an accident during 1952 it was rebuilt to E8A specs). The original version operated at speeds of 85 mph (later increased to 100 mph) with a seven-car consist: baggage-dormitory-coach, four coaches, diner, and tavern-lounge-observation. Photo by FEC staff photographer, Harry Wolfe.

Ever since the late 1800s when Florida became more accessible to the public (by means of Henry Flagler’s Florida East Coast Railway), vacationers and travelers, particularly from the northern states, were enamored with its tropical weather, warm breezes, and beautiful beaches.

This tropical climate gave both railroads an unprecedented marketing advantage not found on most other systems.  Even as passenger rail traffic took serious hits after World War II both the Seaboard Air Line and ACL continued to earn profits with their Florida-bound trains all of the way up through the 1960s!  (Both railroads would merge in 1967 forming the Seaboard Coast Line system.) 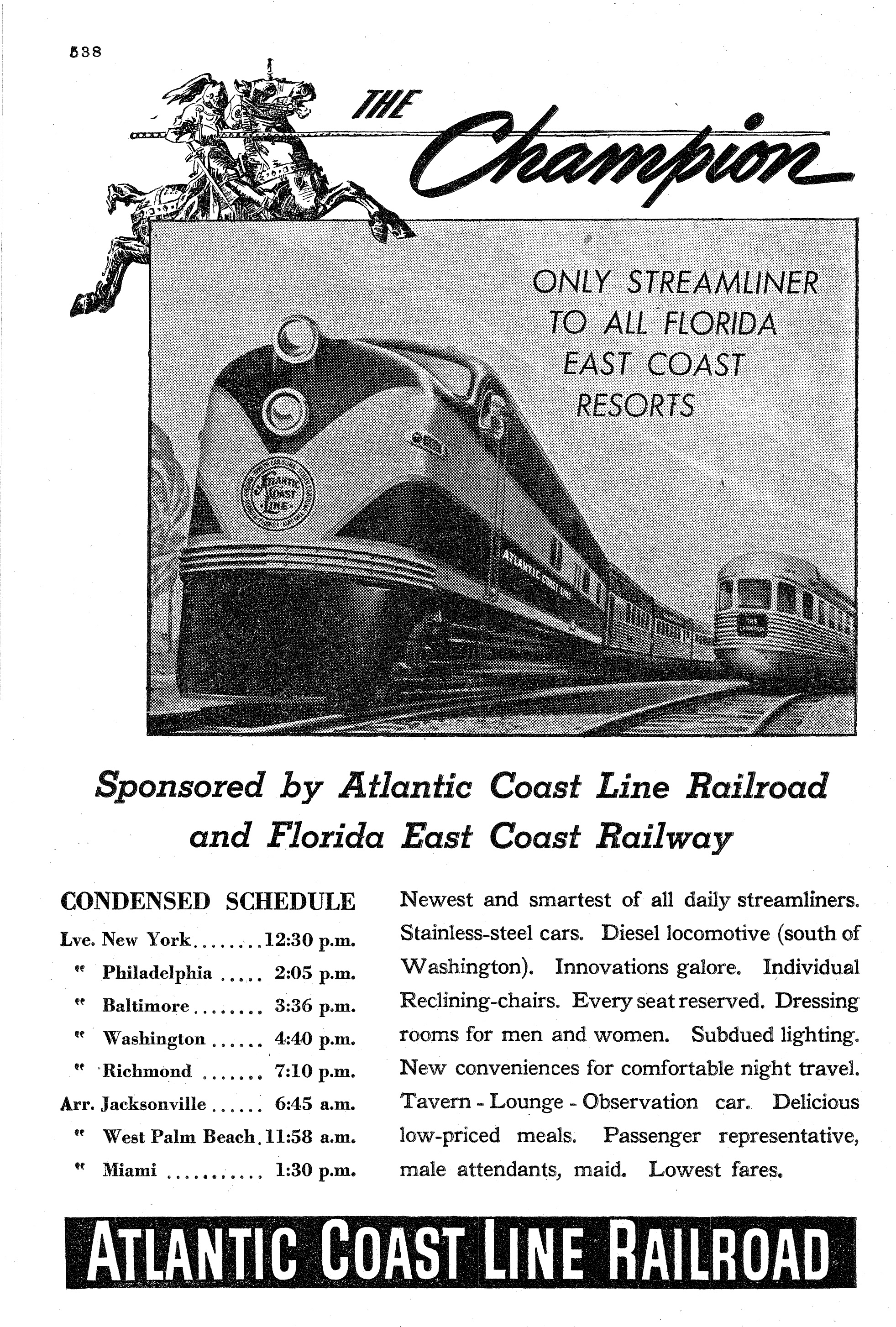 A testament to this popularity can be seen in the number of trains both railroads offered to points south which included: 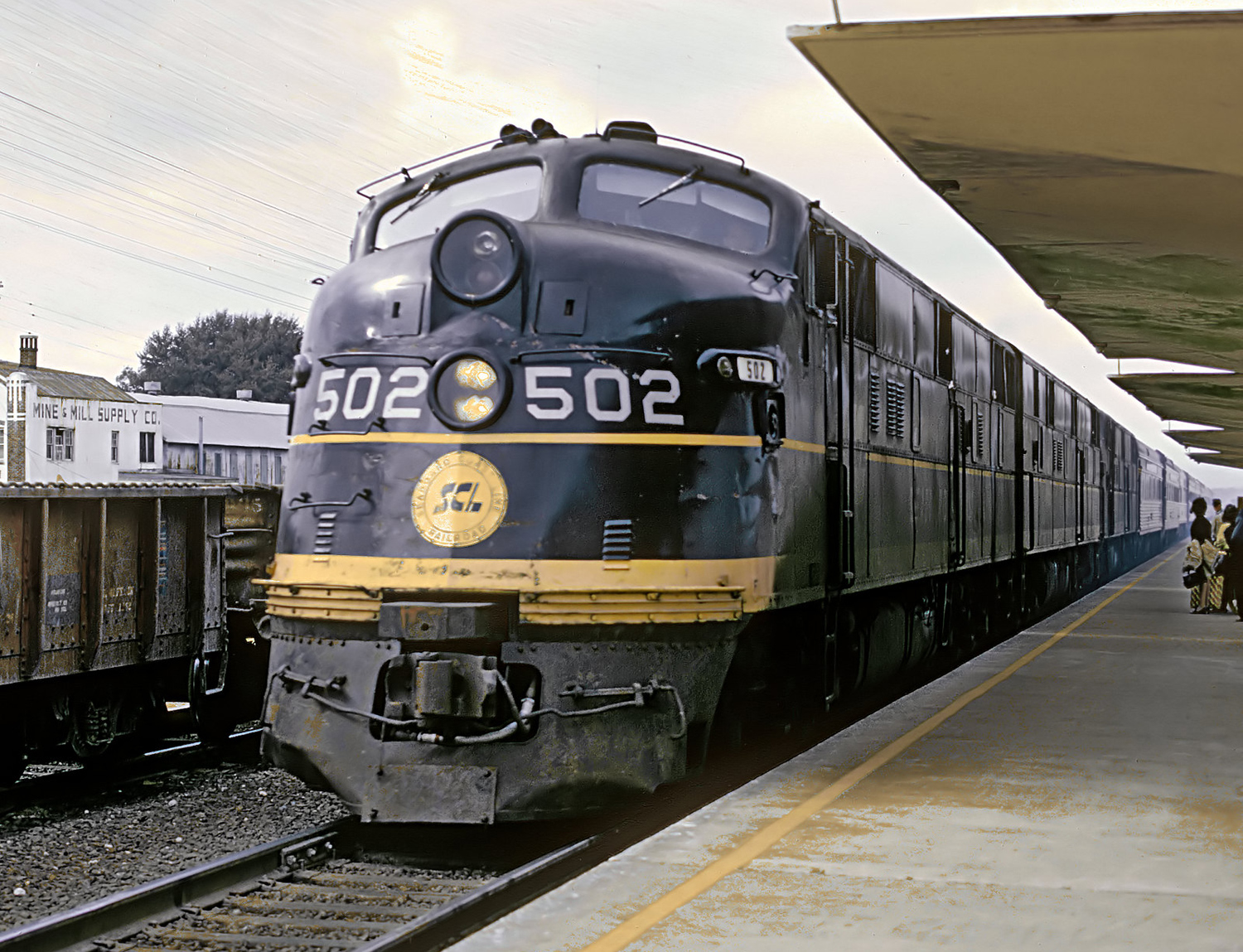 The ACL’s Champion was actually stylized quite similarly to the Silver Meteor when its streamlined, lightweight equipment arrived from the Budd Company in late 1939.

The train itself was adorned in a stunning paint scheme of colorful purple and silver with yellow trim, led by Electro-Motive Corporation (EMC) E3 diesels.

The interior look of the train was again similar to the Meteor and featured nautical and tropical themes in bright colors.  Interestingly, the train operated over four different railroads with its segment across the ACL roughly the mid-point of the train's journey. 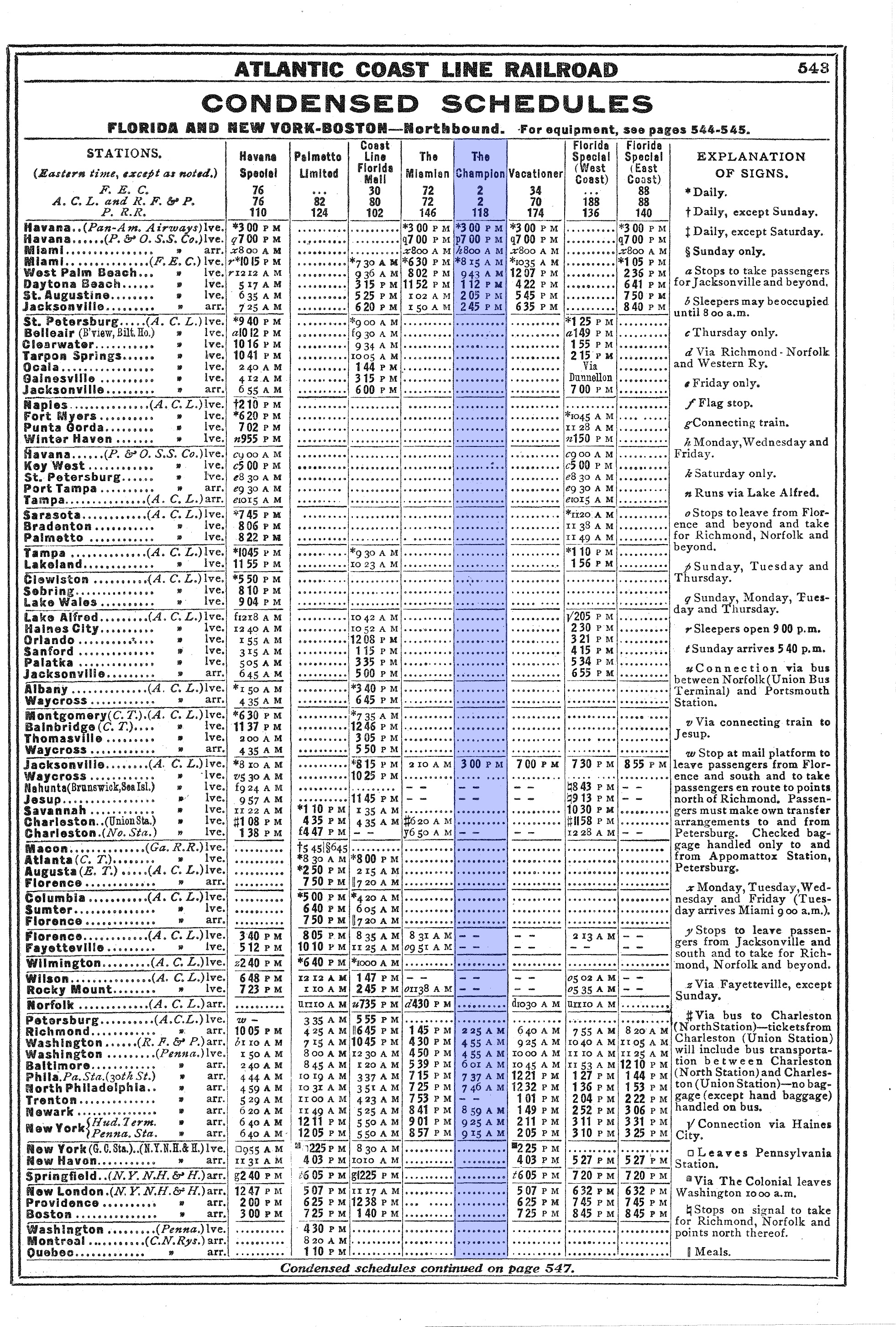 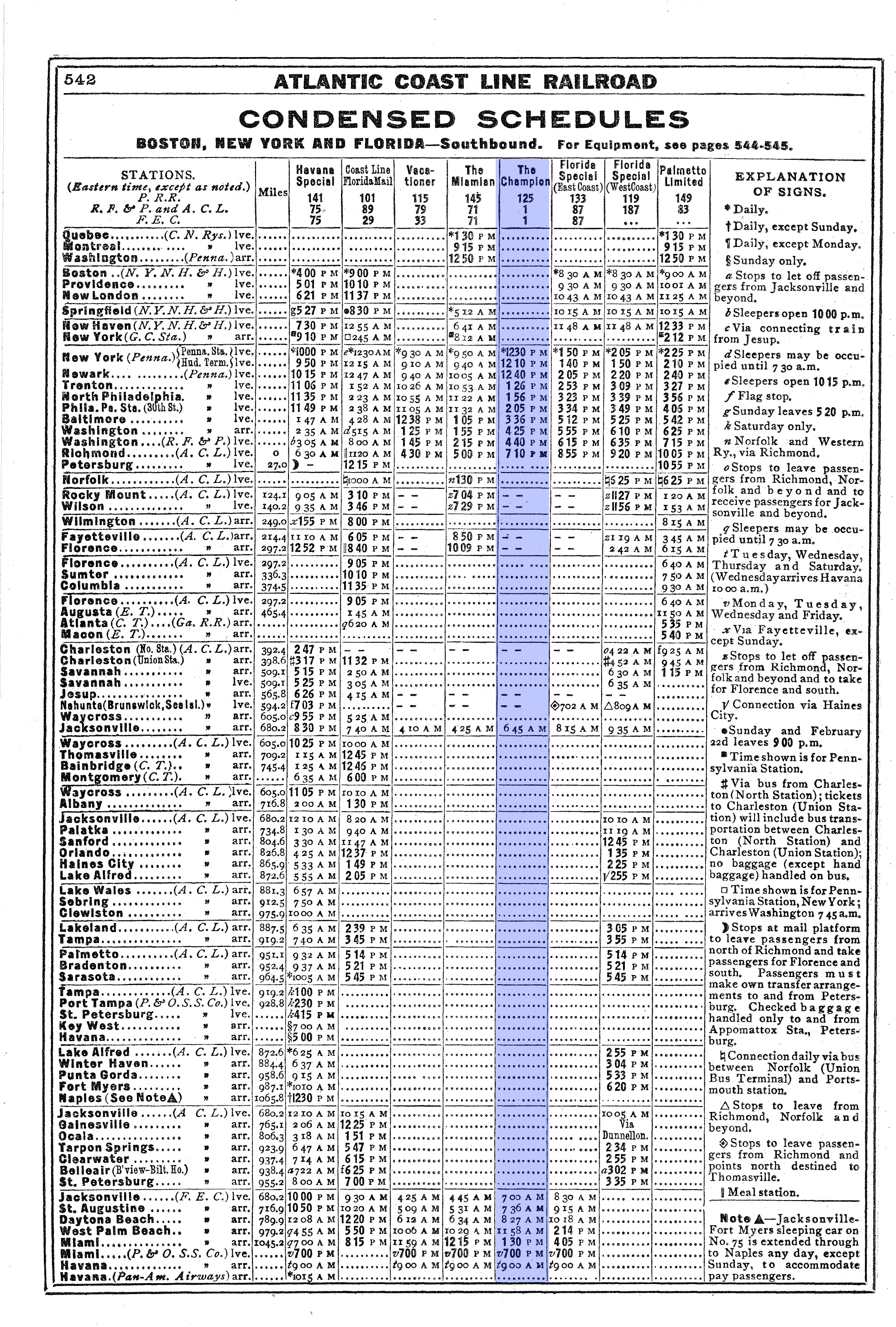 From north to south, the railroad worked in conjunction with the Pennsylvania Railroad to ferry passengers from New York City's Pennsylvania Station to Washington, D.C. (usually under electrically-powered, streamlined GG1 locomotives) where it was handled by the Richmond, Fredericksburg & Potomac to continue its journey southward.

Once in Richmond, Virginia the train was handed over to the Atlantic Coast Line. From this point, it remained under ACL control until reaching Jacksonville, Florida and the Florida East Coast Railway.

Once the train reached Florida East Coast tracks at Jacksonville it was picked up by an equally colorful set of E3s, in an attractive bright yellow and red livery for the remainder of the journey to south Florida. 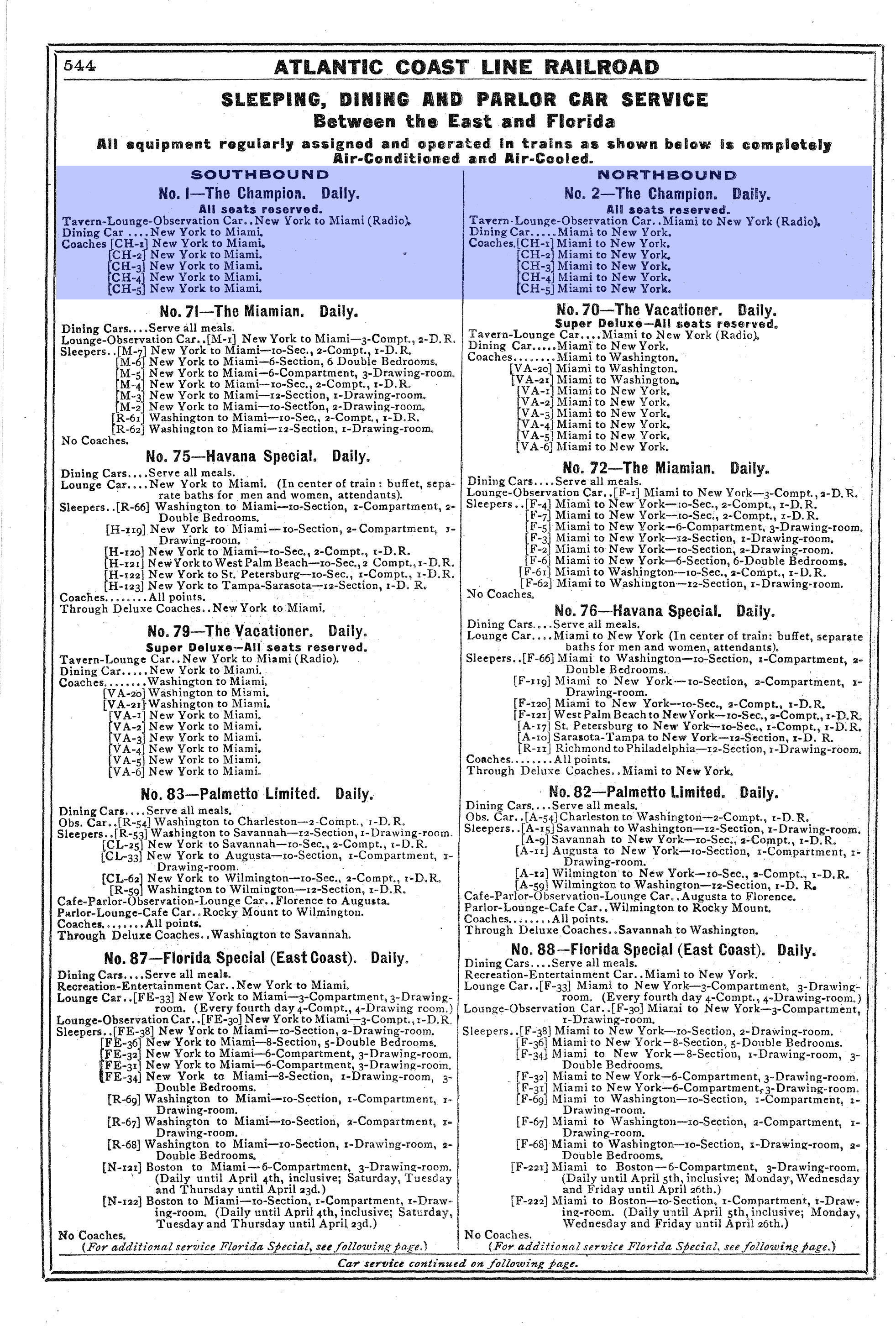 The Atlantic Coast Line’s services to the south included:


The ACL also operated most of these passenger trains in conjunction with the Florida East Coast, such as its Havana Special to Key West (after the 1935 Hurricane destroyed FEC’s Key West Extension the train then terminated as far south as Fort Myers, it was renamed the this train was renamed the East Coast Limited in 1960 and later as the Gulf Coast Special). 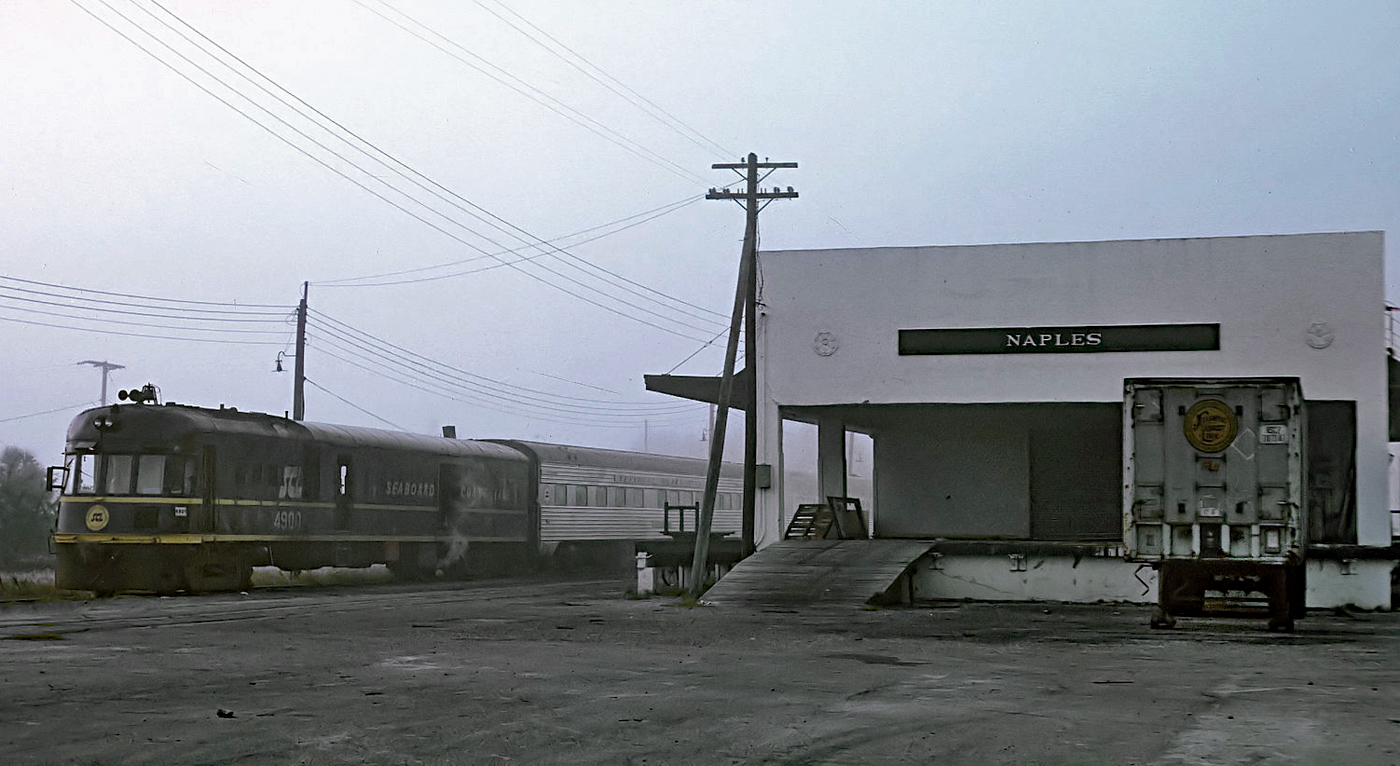 Another scene of Seaboard Coast Line's train #98, "The Champion," at Naples, Florida on March 14, 1971. Powering the train is streamlined doodlebug #4900. This lightweight rail car was built as Seaboard Air Line #2028 by the St. Louis Car Company in 1936. It featured a 600 horsepower, 8-cylinder diesel engine built by the Winton Motor Carriage Company. Roger Puta photo.

The railroad’s Floridian passenger service was also so successful that it continued building new stations up through the 1960s!

(Thanks to Bill Haithcoat for help with the information on this page.) 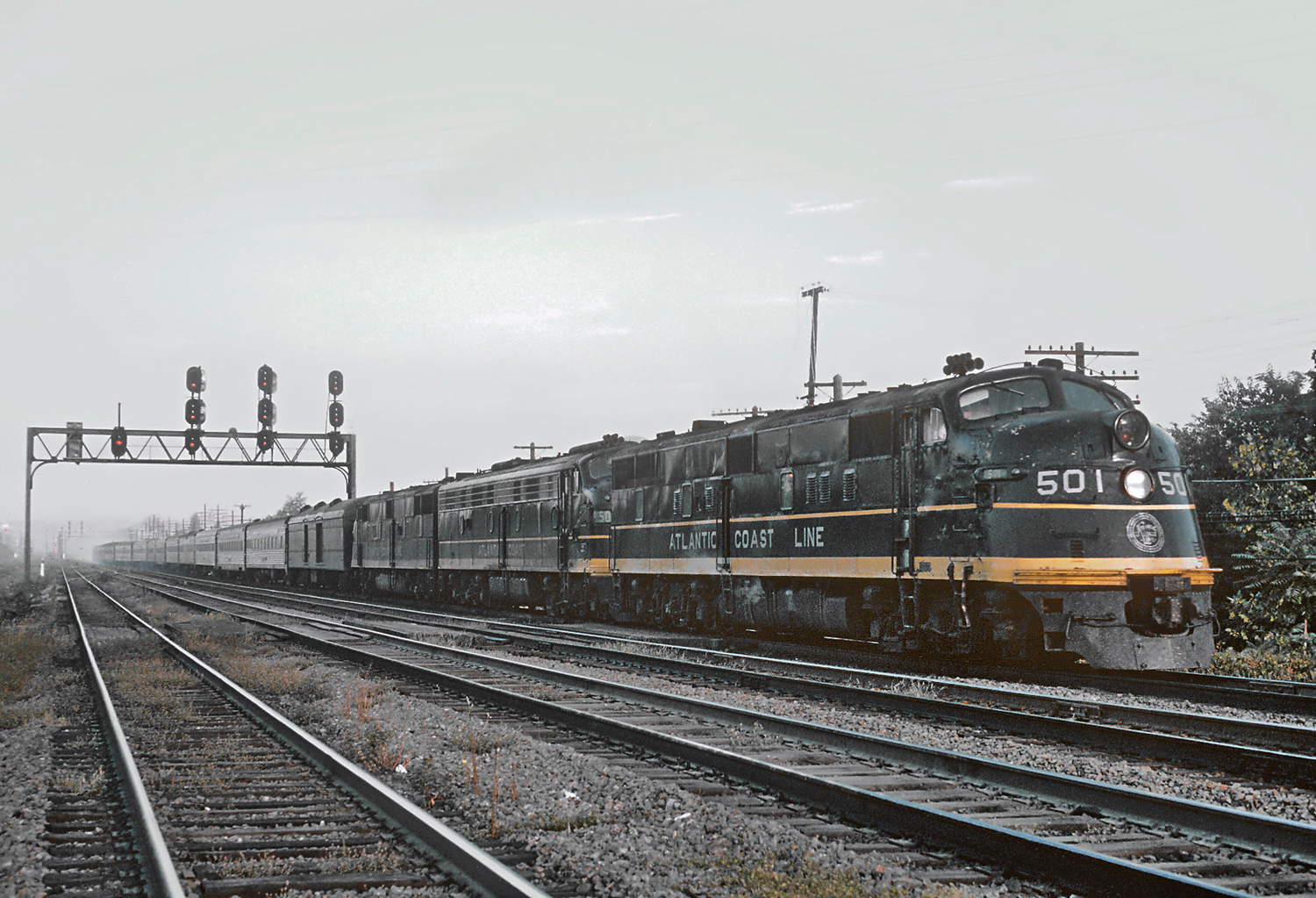 After the merger of the Seaboard Air Line and Atlantic Coast Line in 1967 the SCL continued the Champion as trains #91 (southbound) and #92 (northbound), continuing to offer nearly full passenger train amenities including reclining-seat coach service, sleepers, diners, and tavern-lounges (sleeper service was particularly rare by the late 1960s).

These services continued through the startup of Amtrak in 1971, which continued to operate the train until 1979. While today the train has essentially been combined into the Silver Meteor under Amtrak, it was an extremely successful operation that continues to see high ridership numbers.