What evolved into the Chessie Steam Special was a unique excursion experience that has never really been duplicated before or since.  The purpose of the train, predominantly lead by Reading 4-8-4 #2101 (T-1), celebrated Chessie System's sesquicentennial by recognizing the Baltimore & Ohio's founding (1827) during 1977.

However, before the train was even fully conceived (an idea that was changed and amended several times) the railroad spent lavishly to celebrate the event with dinners and various social functions.

In today's age of railroading such a concept seems hard to fathom but during that era such celebrations still occurred (although they were becoming less common).  The Special ran during much of 1977 calendar year, and into 1978 drawing thousands of visitors over that time. 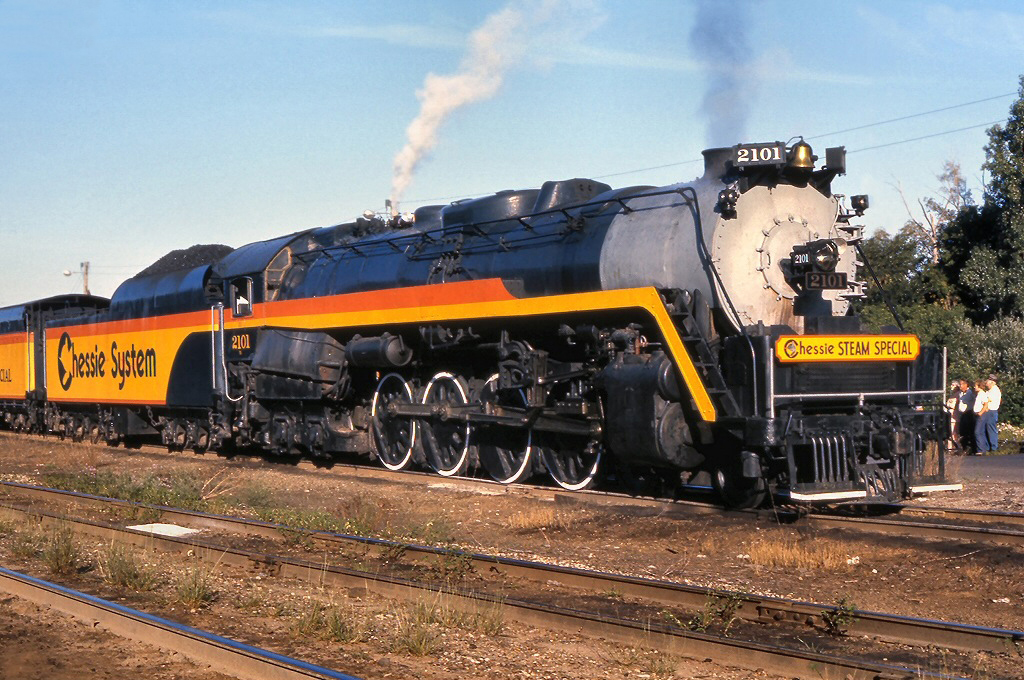 What was once a common practice, by the 1970s much of the railroad industry was no longer enthused about or interested in celebrating its heritage and history.

The decade was extremely hard on many with numerous bankruptcies, cutbacks, and/or mergers taking place to stave off insolvency and collapse.

However, the Chessie System was about to celebrate is sesquicentennial (the B&O was formed on February 28, 1827) and as a road that had remained profitable and successful during the period it had serious plans to pay homage to its heritage thanks to president Hays T. Watkins who was a purveyor of railroad history.

The railroad spent the early part of 1977 enjoying festivities and events from a recreation of the famous race between a horse and the first American-built steam locomotive, the Tom Thumb, to an elaborate dinner on February 28th inside the B&O Railroad Museum's Mount Clare Roundhouse. 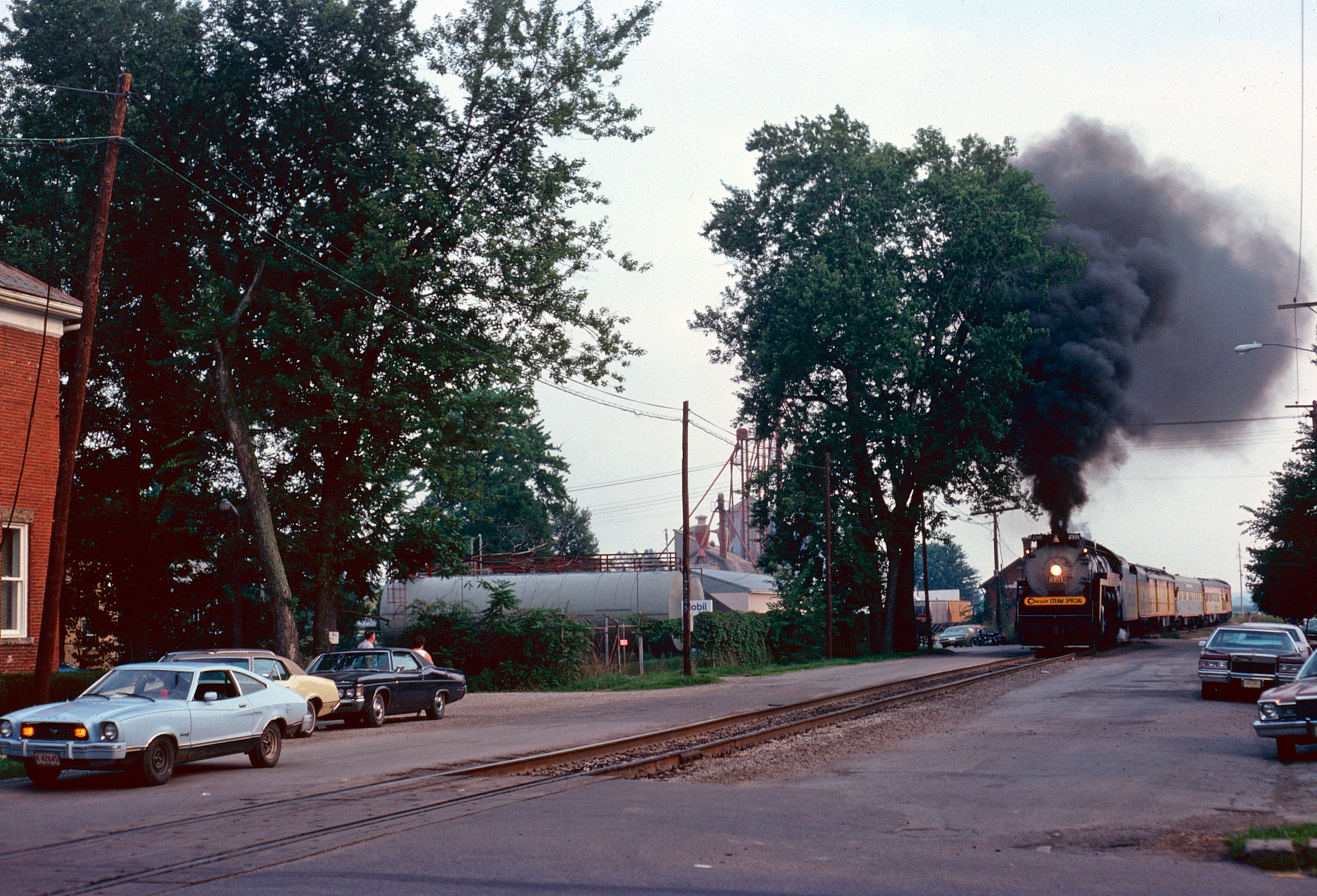 Railroads, and corporations in general, just don't do things like that hardly ever anymore; it's seen as simply too expensive and a needless waste of money.  To top off the festivities, Chessie management also wanted to offer some kind of excursion trip.  At first it was only meant to be a low-key affair and held at the B&O Railroad Museum.

This idea was first proposed by Chessie's vice president of public relations, Howard Skidmore, but others at the railroad wanted something more ambitious.

One thought involved restoring Chesapeake & Ohio Class F-11 4-6-0 #377 (still on display at the B&O Museum) to pull excursions of open-air cars to Ellicott City along the B&O's original main line.  However, with no way to turn the ten-wheeler such a plan was ultimately scrapped. 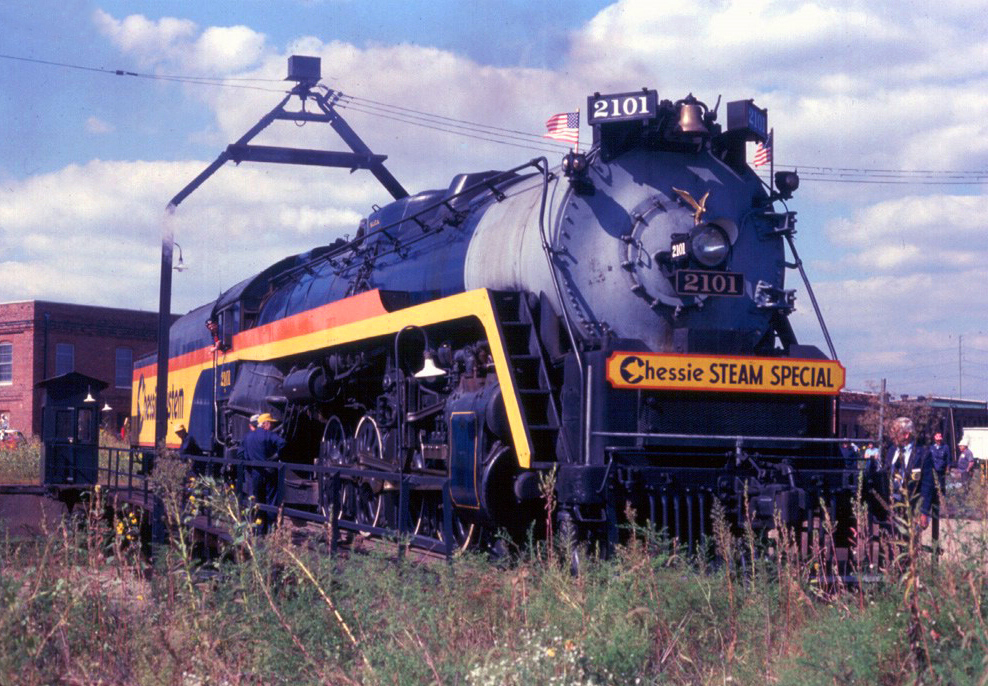 The grandest of ideas came from Trains Magazine's editor, David P. Morgan, which wanted to have the B&O's only preserved 4-6-2, Class P-7 #5300 (the President Washington) used for the excursions.

Unfortunately, while many would have liked to seen this magnificent Pacific restored it was deemed the cost would be more than a quarter-million dollars.  Several other large steamers were looked at but once again restoration costs ended every proposal.

Finally, an idea came from William F. Howes, Jr. who spoke with Chessie's Skidmore about using Ross Rowland, Jr.'s Reading 4-8-4 #2101.  This Class T-1 Northern had been in regular excursion service since March of 1975 when it had pulled the American Freedom Train all over the eastern U.S.

With the locomotive still operable discussions began between Rowland, Skidmore, and other members of Chessie management during late 1976.

Rowland, himself drafted the plan for #2101's excursions along the Chessie System, which consisted of 40 trips during the summer of 1977 using eighteen cars that included open-window seats, air-conditioned coaches, and even first-class accommodations.

This was a far cry from the original ideas but ultimately President Watkins signed off on it.  According to the final agreement the railroad would not even own the locomotive; Rowland worked out a plan to have Chessie lease the 4-8-4 through his corporation, Steam Locomotive Corporation of America, which would perform all maintenance and overhaul work on the Northern.

By May of 1977 the train was ready for service with the Chessie System's classic yellow, blue, and vermillion livery splashed over the entire consist including #2101.  The scheme was a joint effort by the railroad's director of visual media and design, Franklyn Carr, and artist Bob Lorenz. 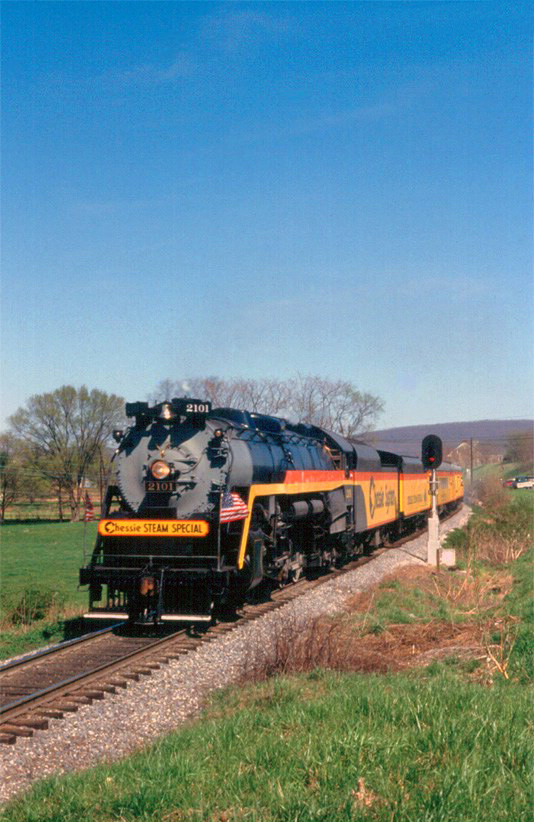 Here, the "Special" passes a wayside signal along the Western Maryland at Chewsville, Maryland during May of 1978. Randy Kotuby photo.

While some criticized the use of the Chessie livery on #2101 no one could argue that the Chessie System Special, a name chosen by Skidmore himself, was a one-of-a-kind consist that has never been seen before or since.

The train ultimately traveled through 10 states, carried 54,900 passengers, and traversed 18,641 miles in the process.

In the March, 1979 issue of Trains, Morgan wrote a four-page article on the lasting impression of the Chessie Steam Special and its unique place in the annuals of railroad history.  While the train only offered 950 seats during every journey, thousands of patrons could be seen near the tracks during each trip hoping to catch a glimpse of the #2101 and watch it thunder past.

Just as Rowland had correctly predicted with the steam-powered American Freedom Train, he was also right in that the public would flock to see #2101 up front on the Chessie Steam Special. 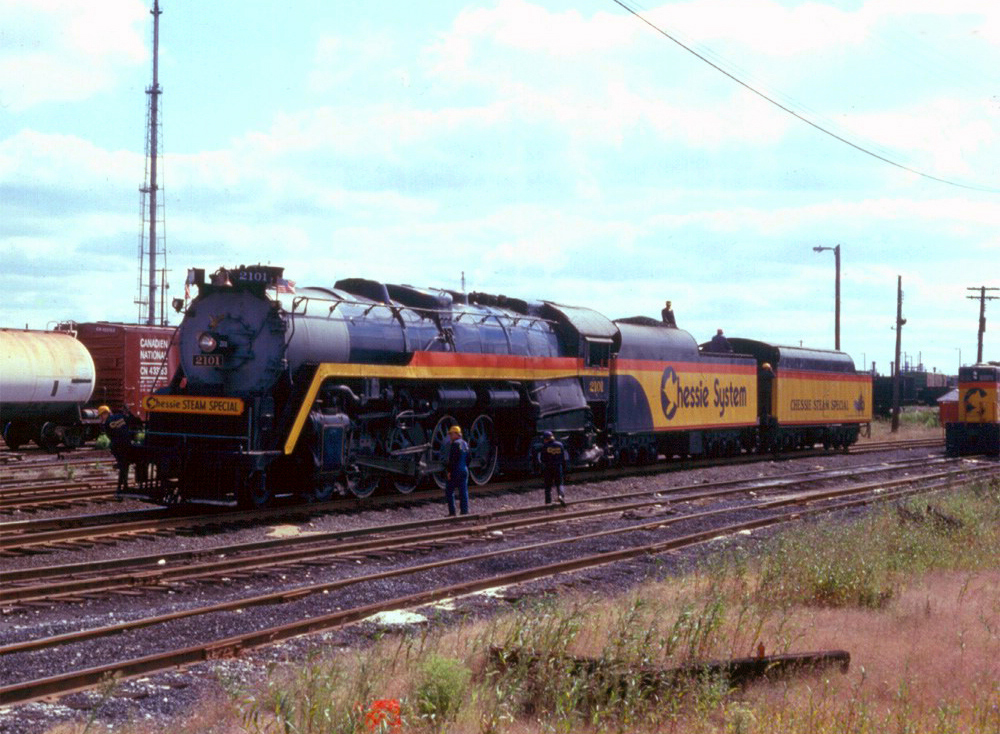 Reading 4-8-4 #2101 receives some maintenance and care at Philadelphia during October of 1978. Randy Kotuby photo.

Mr. Watkins was so pleased with the success of the Special during 1977 that he allowed it to be extended into 1978 for a second season, where it continued to draw thousands trackside.

After the Special concluded in 1978, #2101 was returned to Rowland where the big Northern was stored in Silver Grove, Kentucky.  Sadly, it was here that a roundhouse fire during February of 1979 damaged the locomotive to such an extent that it could not be operated again.

Despite the loss of #2101 as an operational locomotive it will forever be remembered during its trips pulling the AFT and Chessie Steam Special during the late 1970s, a time that saw the rebirth of the steam locomotive as a popular excursion attraction which continues through today.