One of the Baltimore & Ohio’s most exotic passenger trains was a regional dayliner, the Cincinnatian.

This original version of this train featured 4-6-2's and equipment shrouded in streamlining by the company's own shop forces in Mount Clare and it served an unsustainable market between Washington, D.C. - Cincinnati, Ohio.

It is rather interesting B&O officials chose this initial routing; while it operated the railroad's important St. Louis main line, there simply was not enough business between the terminating cities.

Nevertheless, the railroad spent a great deal of money, resources, and effort publicizing the train.

Unfortunately, it proved unsuccessful.  As a result, the train was switched to the more populated Cincinnati - Detroit market.

The Cincinnatian, while never terribly profitable, remained on the timetable for nearly 25 years and survived until the start of Amtrak in May, 1971. 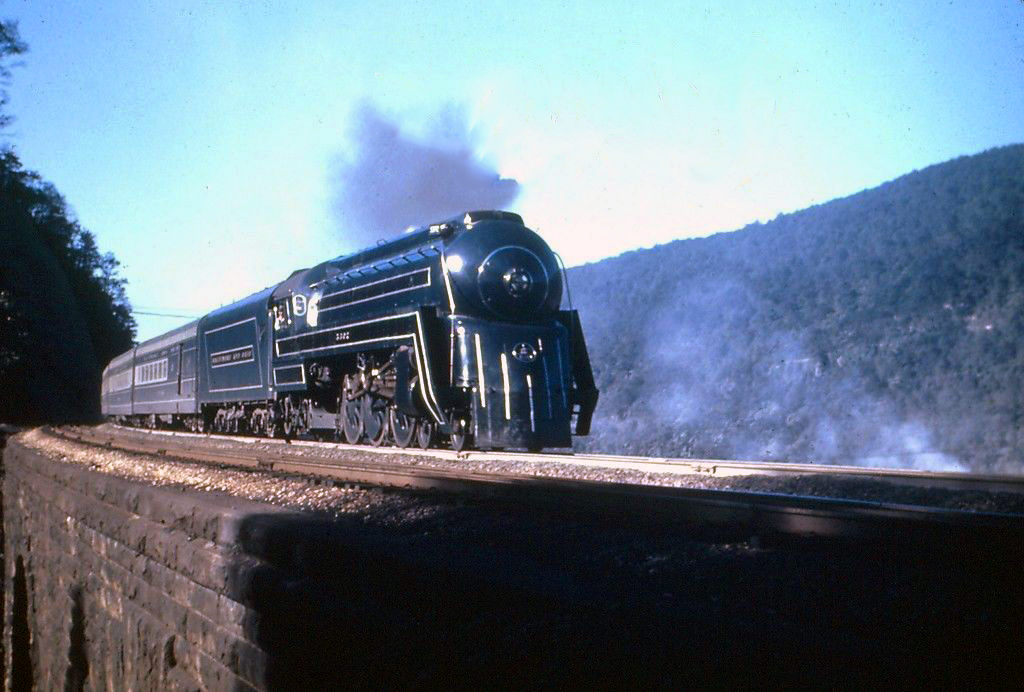 The Baltimore & Ohio, commonly known as the B&O, holds distinction as the country’s first common-carrier railroad, originally chartered on February 28, 1827

As such, it was instrumental in building and growing the nation's economy and settling territory along the frontier when the "West" meant the Ohio River.

Despite its marginal financial situation, the B&O holds many "firsts."  Some of these include:

Within the pecking order of service along this route, it could be described as sitting in third behind the Diplomat, which complemented the National Limited.

An official 1948 consist of the Baltimore & Ohio's eastbound "Cincinnatian."

An official 1948 consist of the Baltimore & Ohio's westbound "Cincinnatian."

Perhaps B&O officials were caught up in streamliner mania sweeping the nation but the Washington-Cincinnati market was an odd choice to launch a dedicated service.

The cities along the Cincinnatian's route included small communities like Martinsburg, Clarksburg, and Parkersburg, West Virginia and Athens and Chillicothe in Ohio.

Aside from Cumberland, the city on the run was Parkersburg, with a population at the time of just under 50,000 residents.

The train debuted on January 19, 1947 and wasn't long before the railroad recognized the patronage problem.

After just three years on its original schedule, the B&O switched the Cincinnatian to the Detroit - Cincinnati market in June of 1950. 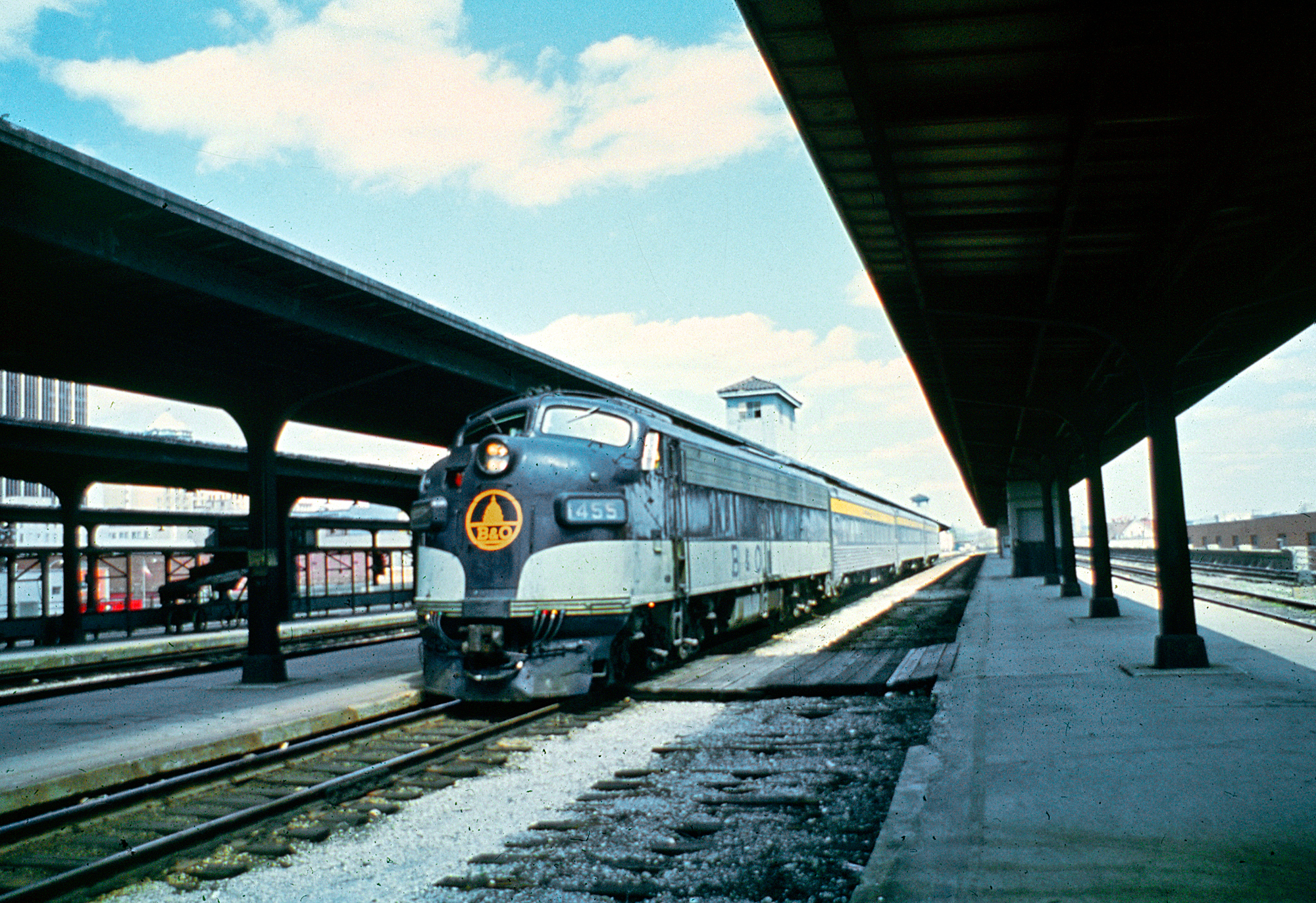 The Cincinnatian had been built entirely from heavyweight equipment.  However, one would never have known this at first glance as the B&O’s Mount Clare shop forces did a superb job of turning old cars into something quite beautiful.

The consist was built completely from the ground up and arguably as finely crafted as anything constructed by Budd, Pullman-Standard, or American Car & Foundry. 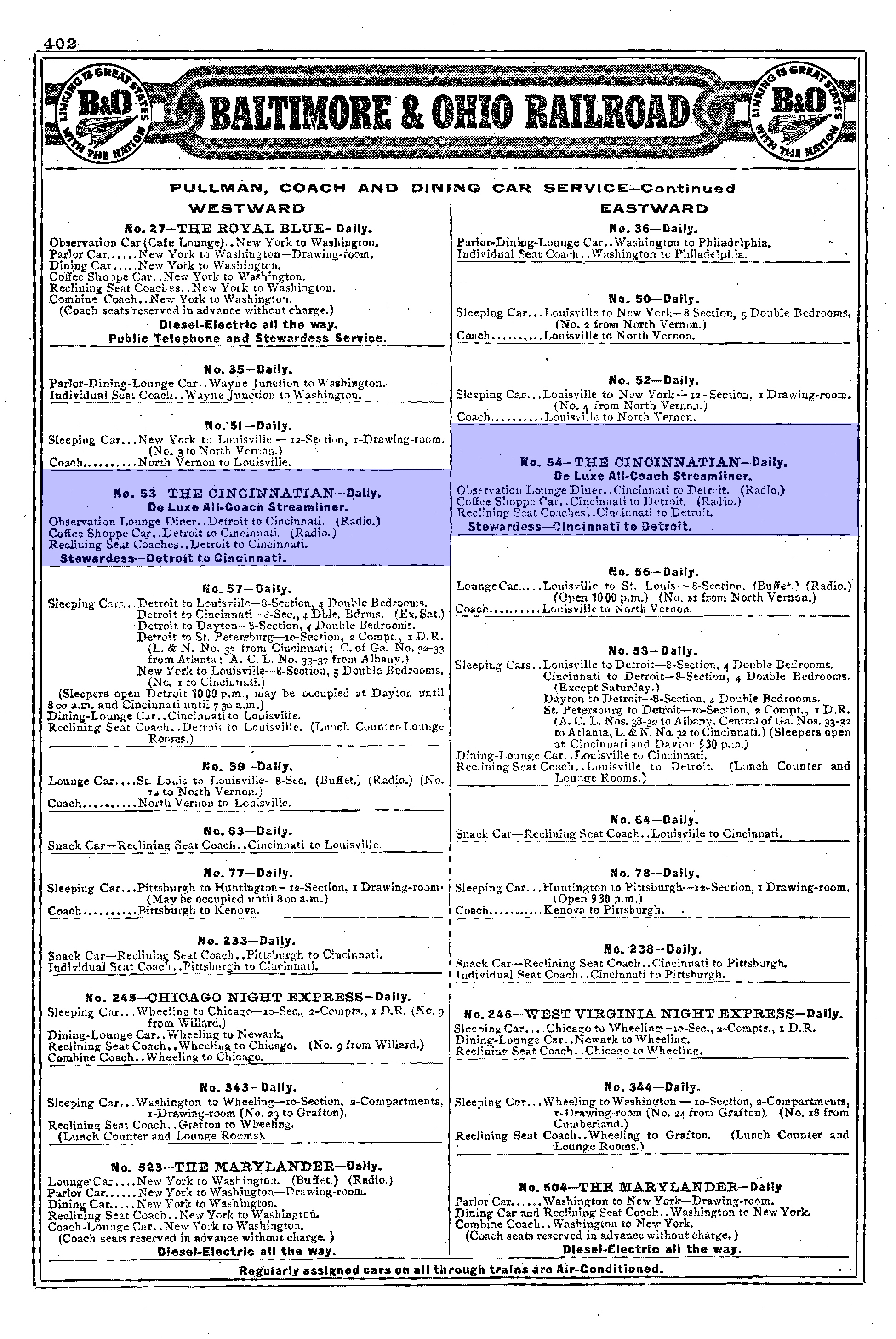 The train was clad in a two-tone version of the B&O’s regal dark blue and accentuated with silver trim.  The livery was a version of the railroad's standard blue and grey passenger scheme.

The Cincinnatian's streamlining was the work of the B&O's own Olive Dennis, a female engineer.

Even the lead locomotives were bedecked in match paint with similar streamlining; they certainly could not be missed! 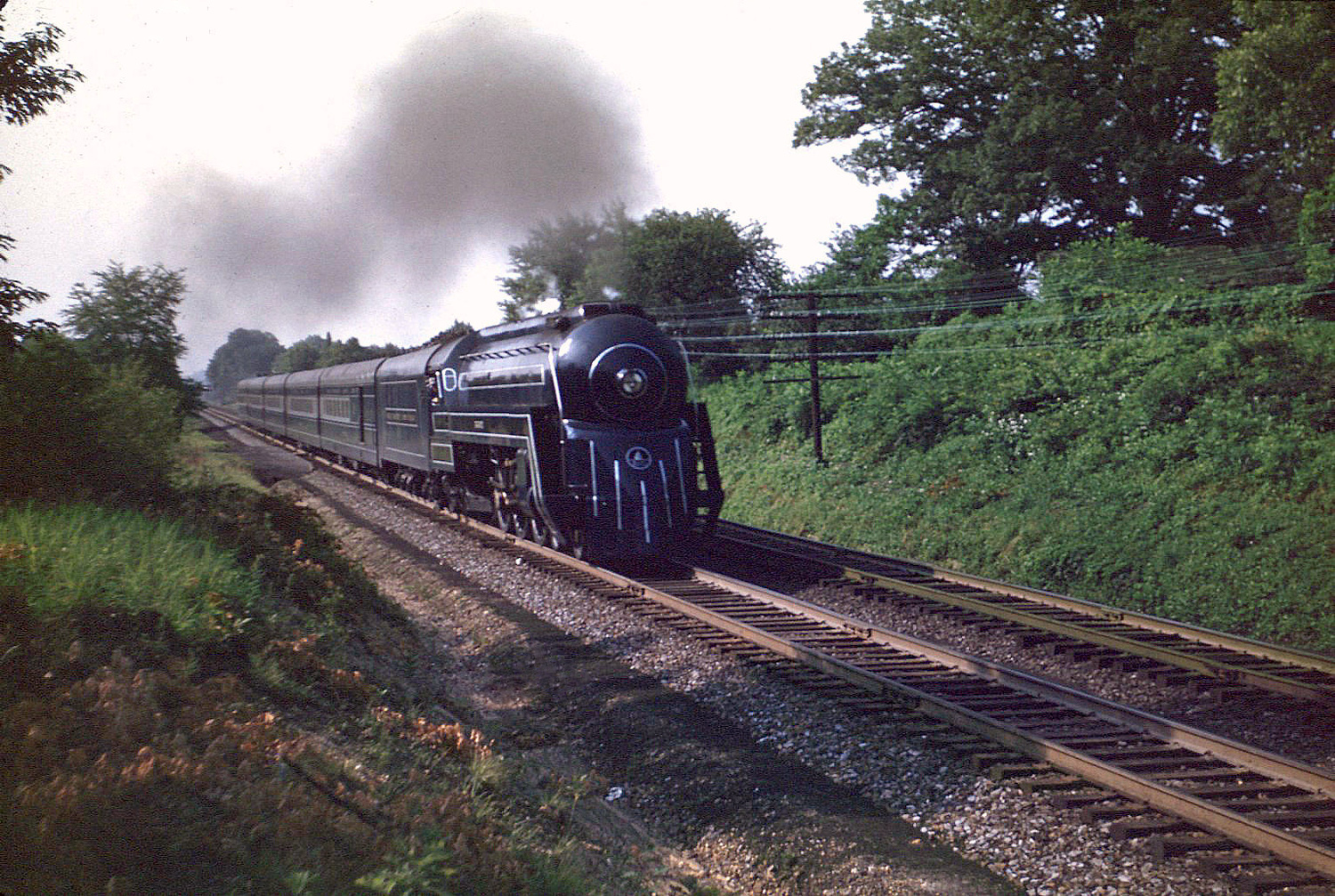 The Baltimore & Ohio's original "Cincinnatian" (Baltimore - Cincinnati), is seen here at an unknown location led by one of the road's handsome P-7d Pacific's (#5301-5304), circa 1947. The train's accommodations included a Coffee Shoppe Car, reclining seat coaches, and diner-lounge-observation. Poor ridership along the lightly-populated route resulted in the "Cincy" switching to a Cincinnati - Detroit schedule in June of 1950. Photographer unknown.

The steamers were part of the B&O's handsome Class P-7d's and four, in all, #5301-5304 received the custom streamlining.

To complete the train's look it was given silver pinstriping with "The Cincinnatian" flanking the rear observation car.  On the Cincinnati – Detroit run, the train was renumbered as #53 southbound and #54 northbound.

Right up until the end the Cincinnatian continued providing beverage and food service between Cincinnati and Lima, Ohio along with reclining-seat coaches.