One of Santa Fe's lesser-known streamliners launched during the 1930s was the Chicagoan/Kansas Cityan.  This train served its namesake cities and as expected provided the best of services the AT&SF had to offer.

It was diesel powered from the very beginning utilizing handed down equipment from the original Super Chief incarnation.  In succeeding years the schedule was extended, first into Oklahoma and then later as far south as Texas.

When the railroad launched the Texas Chief after World War II this train took precedent over its counterpart.

As patronage declined throughout the 1950s the Santa Fe was eventually forced to institute cutbacks which saw the Chicagoan/Kansas Cityan discontinued before the end of the 1960s. 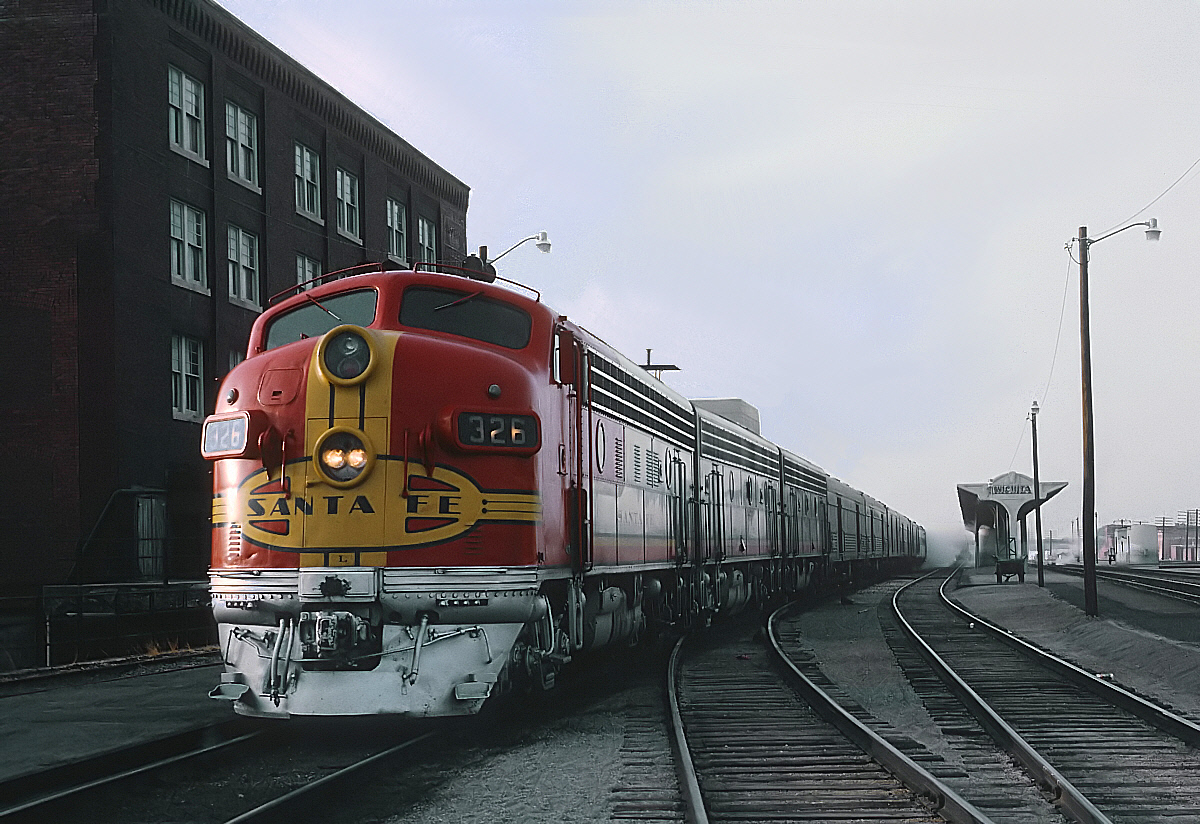 Through the euphoria and allure of new streamliners christened during the 1930s, particularly on the AT&SF who spared no expense in making sure it provided one of the top transcontinental trains in the West (and eventually boasted an entire fleet of legendary names), some trains were lost in the glitz and glamor.

Such was the case for the Chicagoan/Kansas Cityan.  This train, the former named for the eastbound run (#12) and the latter the westbound (#11, it then operated as far south as Wichita, Kansas), was launched only a few years after the Super Chief hit the rails.

It officially embarked from Chicago on April 17, 1938 and carried a seven-car consist of lightweight, stainless equipment manufactured by the Budd Company (a builder the AT&SF often turned to over the years).

Power was initially provided by a few of the Santa Fe's original E1 diesels, Electro-Motive (EMC) products manufactured in 1937 for the original Super Chief consist; they wore the first version of the iconic Warbonnet livery designed specifically for them by General Motors' styling department artist Leland A. Knickerbocker.

However, they operated for only a few weeks before being replaced by the Santa Fe's famous set of EMC boxcabs, #1A and #1B, which had powered the pre-streamlined Chief beginning in early 1936.  The units were rebuilt at the railroad's Topeka (Kansas) shops with canopied cabs and a somewhat streamlined nose while wearing a version of Warbonnet paint.

These units remained power for the Chicagoan/Kansas Cityan until around 1940 when E1s again took over (the entire fleet was later rebuilt with the classic "Bulldog" nose in 1953 and classified as E8AMs, a design that came to define Electro-Motive's cab models).

In the coming years other power included E6s while the train itself saw service extended first to Oklahoma City and then as far south as Dallas.  According to Mike Schafer and Joe Welsh's book, "Streamliners: History Of A Railroad Icon," the Chicagoan/Kansas Cityan operated between Chicago and Wichita during the day while the rest of the trip south occurred during the overnight hours.

As time passed consists changed; in December of 1939 the first 14-section, lightweight sleepers were added as well as a baggage-chair car, baggage-chair-dormitory, and an RPO-baggage.

Throughout the 1940s there were other various swaps in equipment from the addition of more chair cars to sleepers.  During 1954 the Santa Fe began receiving its new "Big Dome" lounges from Budd, fourteen in all.

Meant to equip the Chicagoan/Kansas Cityan and El Capitan (as well as the yet-to-be launched transcontinental San Francisco Chief) they were acquired largely due to the popularity of the earlier "Pleasure Domes" and offered full-length dome viewing with a 57-seat capacity along with an 18-seat lounge according to Steve Glischinski's, "Santa Fe Railway."

Interestingly, even though the Santa Fe owned few E units, predominantly relying on F3s and F7s for passenger assignments, the six-axle locomotives often led the Chicagoan/Kansas Cityan throughout the years. 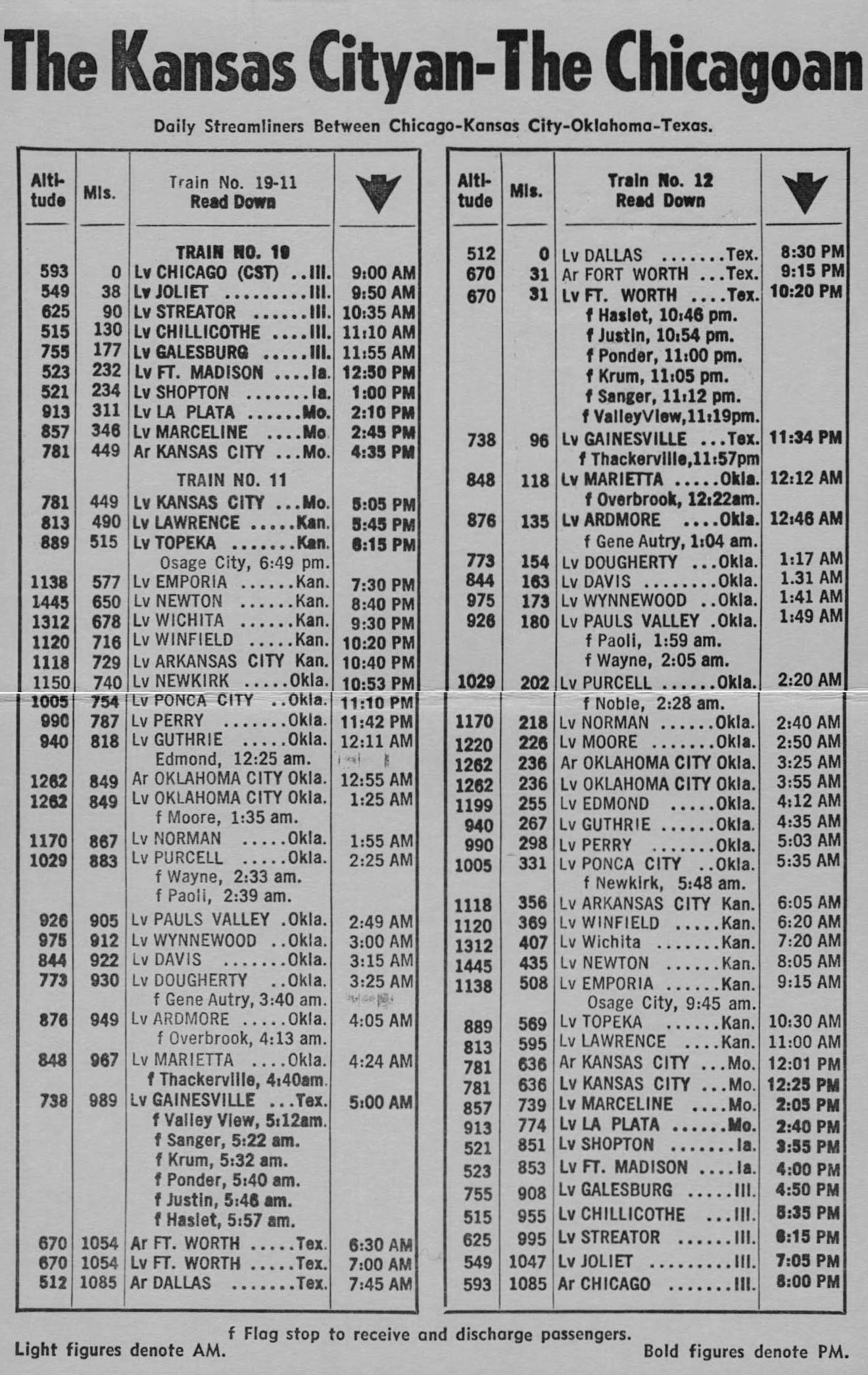 Unfortunately, the postwar era of rail travel was hard on most railroads although the Santa Fe weathered the declines better than most, in no small part thanks to its high speed-running and unparalleled services.

During 1955 the Chicagoan/Kansas Cityan lost its full-service diner, replaced by a lunch-counter diner although the train continued fielding many chair cars along with a few sleepers (complementing a parlor-observation and a handful of head-end cars).

By the end of the decade even the AT&SF was having a difficult time justifying so many named trains on its timetable in the face of falling patronage.  This was particularly true with the Chicago-Texas market then served by two notable streamliners, the Texas Chief and Chicagoan/Kansas Cityan. 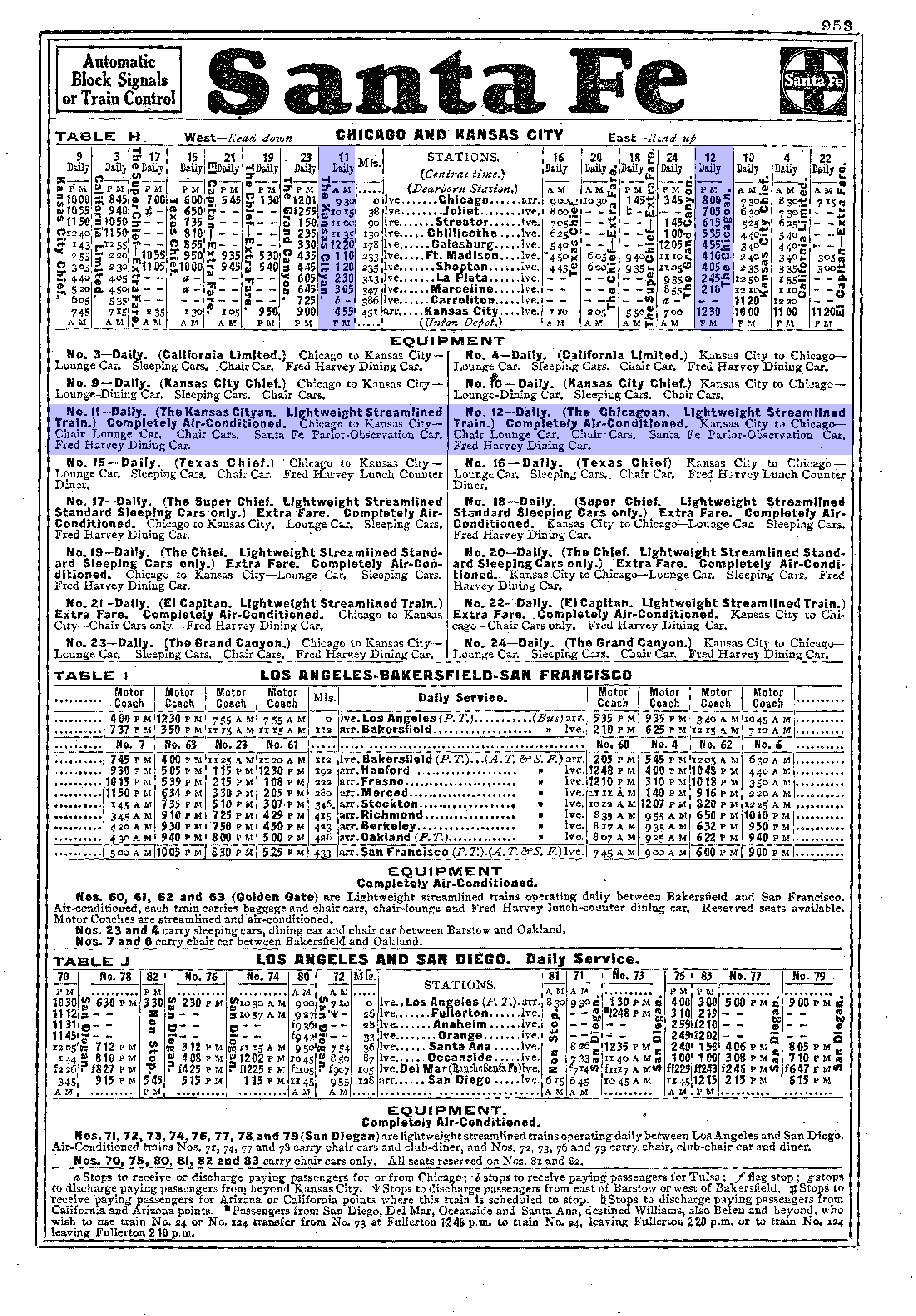 Much to its chagrin, by the 1960s the proud Santa Fe was finally forced to initiate cutbacks within its passenger fleet, no longer able to ignore the growing red ink.  On April 18, 1968 the Chicagoan/Kansas Cityan made its final run (until the end the train was still powered by those rebuilt E8AMs) leaving the Texas Chief as the railroad's last remaining long-distance train in that market.

This, of course, wasn't the only example of service reductions; the original Chief was also canceled in 1968, as was the Golden Gate (a regional streamliner serving Oakland and Bakersfield, California), and the AT&SF combined its flagship Super Chief with the highly regarded El Capitan during the decade.