California Railroads In "The Golden State"

California railroads are, in a nutshell, entirely in a class by themselves.

While the state was late in being accessed by the nation’s ever growing rail grid compared to states like New York, Maryland, and Pennsylvania all of whom had over 300 miles of trackage by 1840.

- It’s first railroad did not appear until the 1850s although much of this is due to the then territory’s obscurity, until the Gold Rush of the 1840s changed everything. -

It did not take long for California to catch up!  After the Gold Rush and completion of the Transcontinental Railroad, California's railroads exploded to over 2,000 miles by 1880.

Today, the state remains one of the top in the country with key main lines crisscrossing the state carrying both passengers, daily commuters, and plenty of freight.

As can be seen in the below graph, California has abandoned roughly half of its all-time rail mileage.  Defunct lines litter the state, many of which were secondary branch lines and agricultural corridors.

At one time a great deal of the state's booming farming industry, including perishables, shipped their product by rail.  Today, much of this has been siphoned away by the trucking industry. 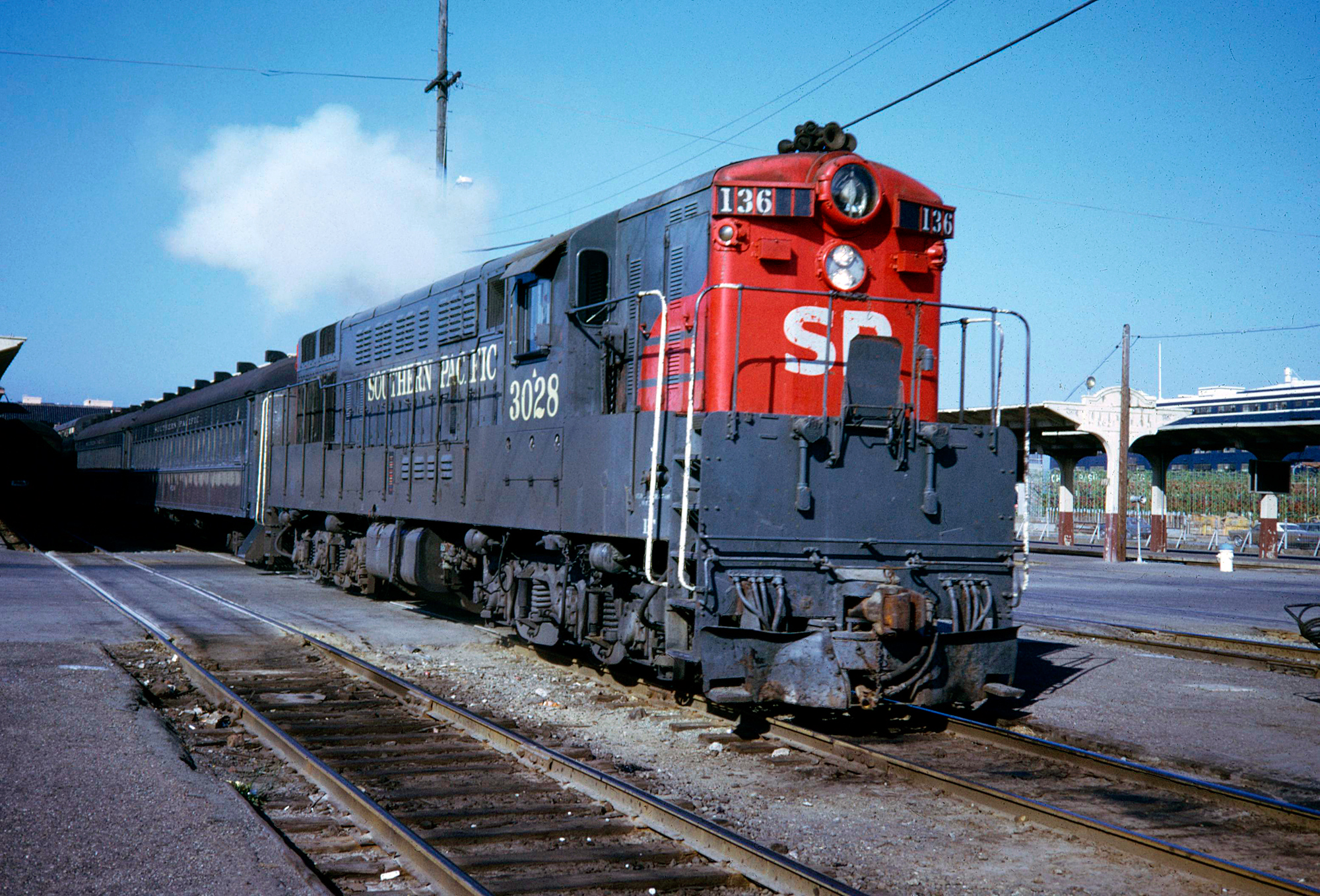 Standard-gauge railroads in California have their official beginning in 1856 when the Sacramento Valley Railroad completed its 22-mile line connecting Sacramento with Folsom, California.

However, it was the completion of the Transcontinental Railroad in 1869 between the Central Pacific (which would become part of the Southern Pacific) and Union Pacific that actually kicked off the state’s explosion of railroads and more importantly, its economy, as people began flocking to California in droves.

The CP was planned by Theodore Judah and financed by what became known as the "Big Four"; Leland Stanford, Collis Huntington, Charles Crocker, and Mark Hopkins.

The railroad began construction in 1863 and the rest, as they say, is history.

California has lost roughly 3,500 miles of its infrastructure since the 1920's.  Like most states, most of these abandonments occurred after 1965.

Despite such a large loss, most of the state's removed lines consist of secondary or agricultural branches operated predominantly by Southern Pacific.  In addition, some Santa Fe and Union Pacific trackage has also been removed.

By 1880, eleven years after the completion of the transcontinental line California featured a staggering 2,185 route miles of railroads!

Today, the state holds over 6,000 miles of trackage with much of it concentrated around the its ten largest cities (the rest of which mostly fans outward north, south, east, and west in the way of key main lines). 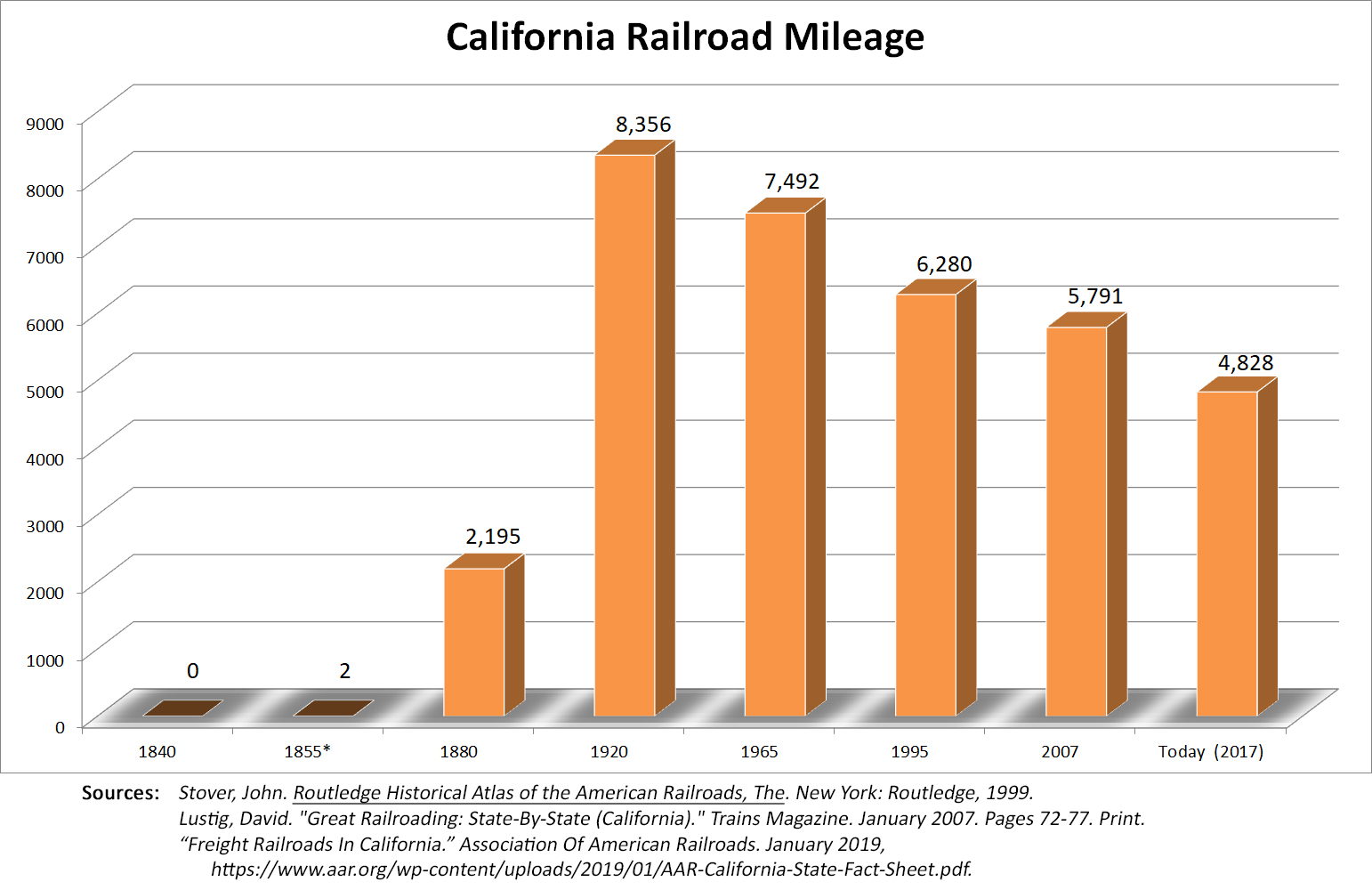 * California's very first railroad actually put into service was the Arcata & Mad River Railroad.  According to Dr. George W. Hilton's book, "American Narrow Gauge Railroads," it was organized in 1854 by the Union Company as the Union Wharf & Plank Walk Company for the purpose of moving lumber from schooners docked at a pier in Union (Arcata) along Humboldt Bay near Eureka.

It used wooden rails via a horse tramway system and was built to a gauge of 3 feet, 9 1/4 inches. In 1855, 2 miles of this track was in service. In 1875 its name was changed to the Union Plank Walk & Railroad Company.  It became the Arcata & Mad River Railroad in 1880 and throughout its corporate existence handled timber traffic.

By the early 20th century California was booming and so were its railroads. In all the state would find itself home to some of the most legendary and celebrated Class I railroads of all time. 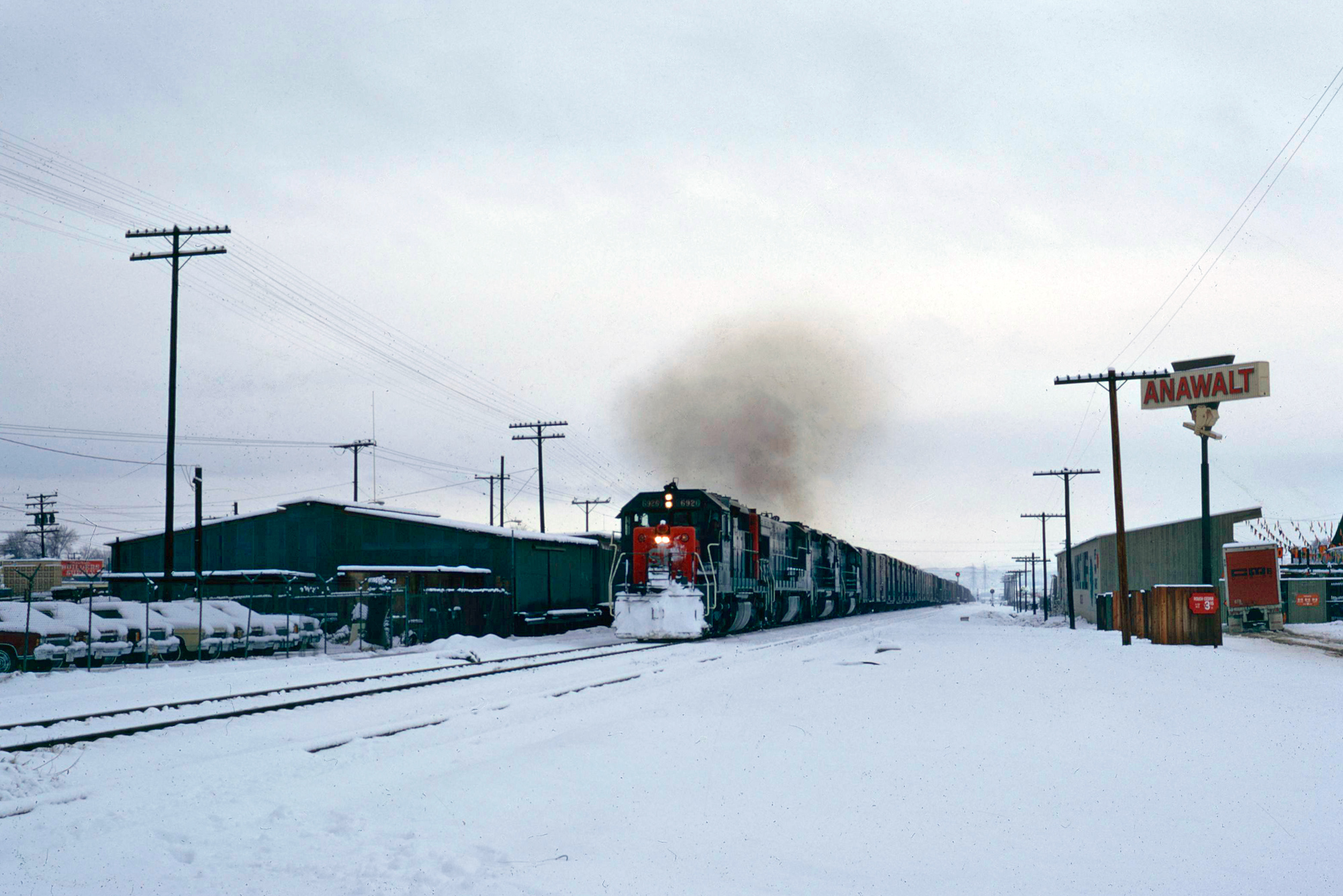 A rare winter storm has descended upon Newhall, California as Southern Pacific SD35 #6926 leads its train south/east through the town on January 4, 1974. Anawalt Lumber can be seen at right. American-Rails.com collection.

The SP served every large market in the state and likewise moved about every type of freight imaginable heading east.

Some of this included things like perishables from the San Joaquin Valley, a once massive operation that provided significant profits for the SP.

Today, however, these are little more than abandoned spurs and buildings dotting the valley where the railroad used to load and ice its cargo (the service died upon SP’s poor service in the late 1970s which today, while making a small comeback, still almost exclusively relies on trucks to move fresh goods such as lettuce, carrots, and cabbage). 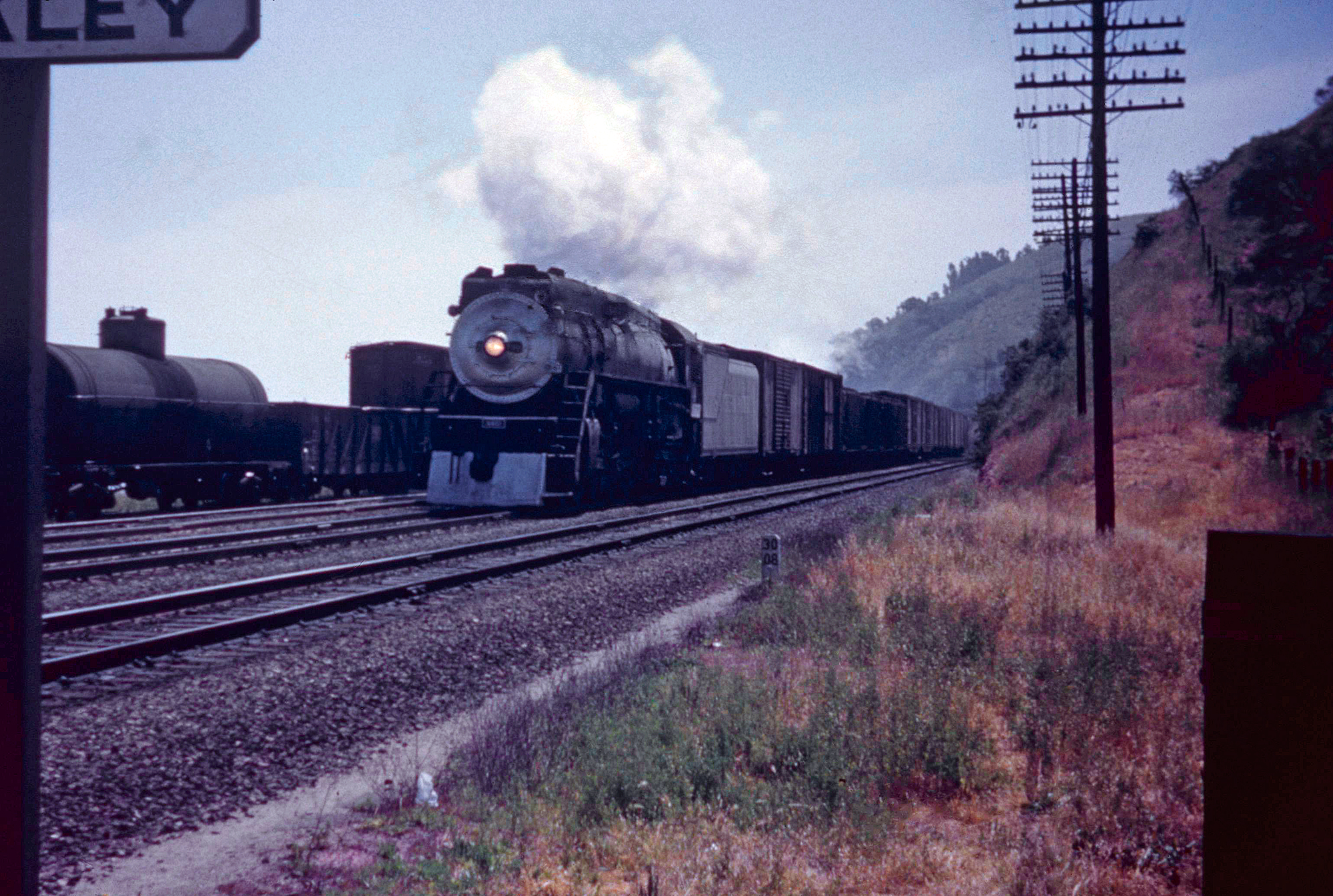 Southern Pacific 4-8-4 #4410 works freight service as the train heads west through Eckley, California along the Carquinez Strait on May 20, 1951. American-Rails.com collection.

While the former two are still bustling, automotive parts are another traffic source that has mostly dried up particularly in the once industrialized booming and bustling San Francisco bay area. 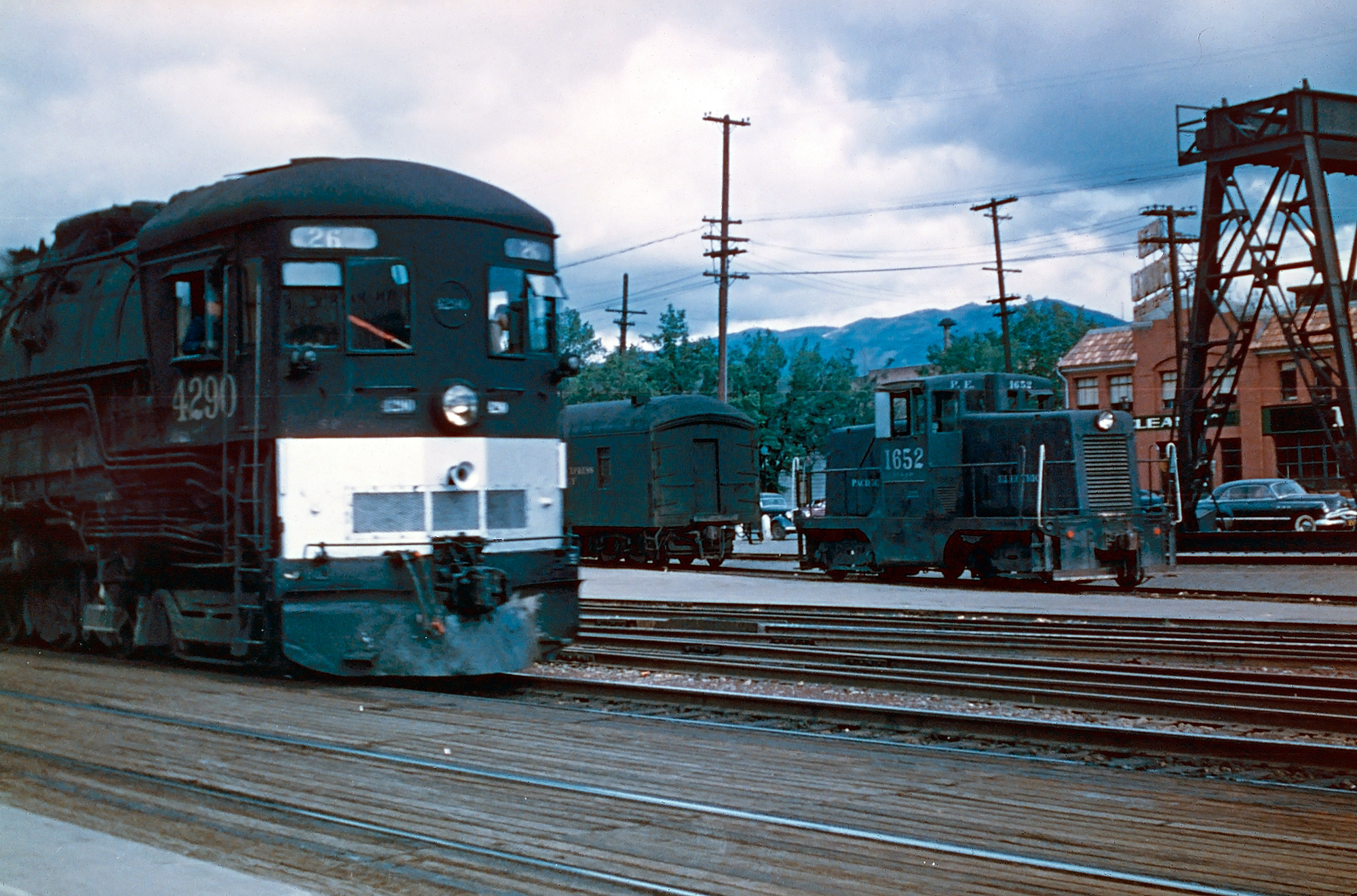 At one time Southern Pacific dispatched several trains a day in and out of the city. However, by the 1970s this traffic began to disappear as plants in the area closed.

Today, San Francisco is completely devoid of almost all freight rail service and all that remains is commuter and light rail operations.

Even the Southern Pacific itself is gone. A once extremely dominate and profitable large western railroad, the Espee began to lose its way in the 1970s and by the 1980s was a mere shell of its former self. 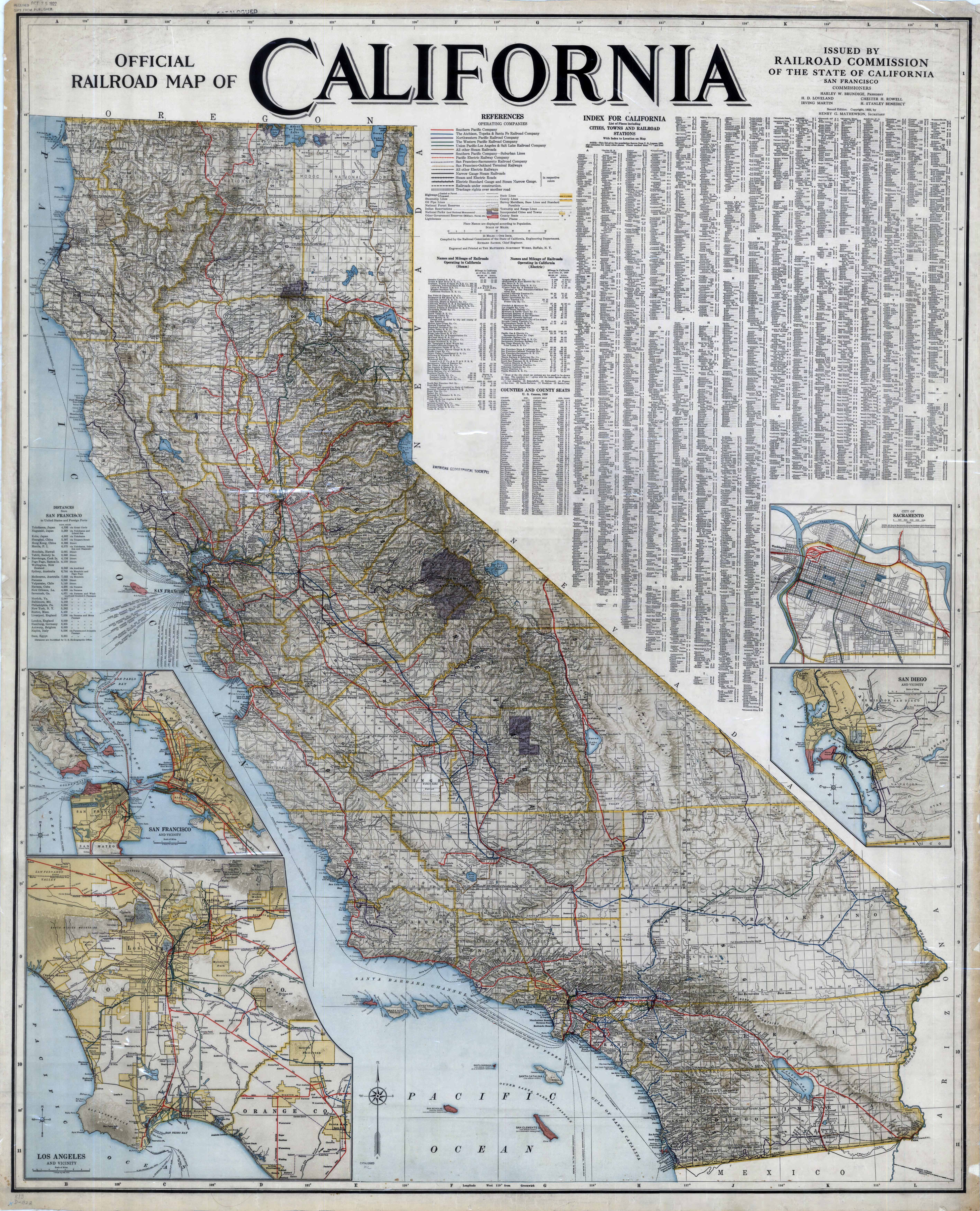 A 1922 map of California railroads, roughly during the industry's peak years, prepared by the California State Railroad Commission.

One aspect of California's railroad history often overlooked as its interurban/streetcar industry.  In the West these systems were scattered and fewer in number than throughout the Midwest and East.

However, the Golden State boasted 1,295 miles of interurbans during its peak in the early 1900's.

According to the book, "The Electric Interurban Railways In America" by authors George Hilton and John Due, this ranked the state 3rd in all-time mileage.  The  most notable systems included:


Alas, all were largely gone by World War II save for the Pacific Electric and Sacramento Northern which survived for a few more years as freight carriers. 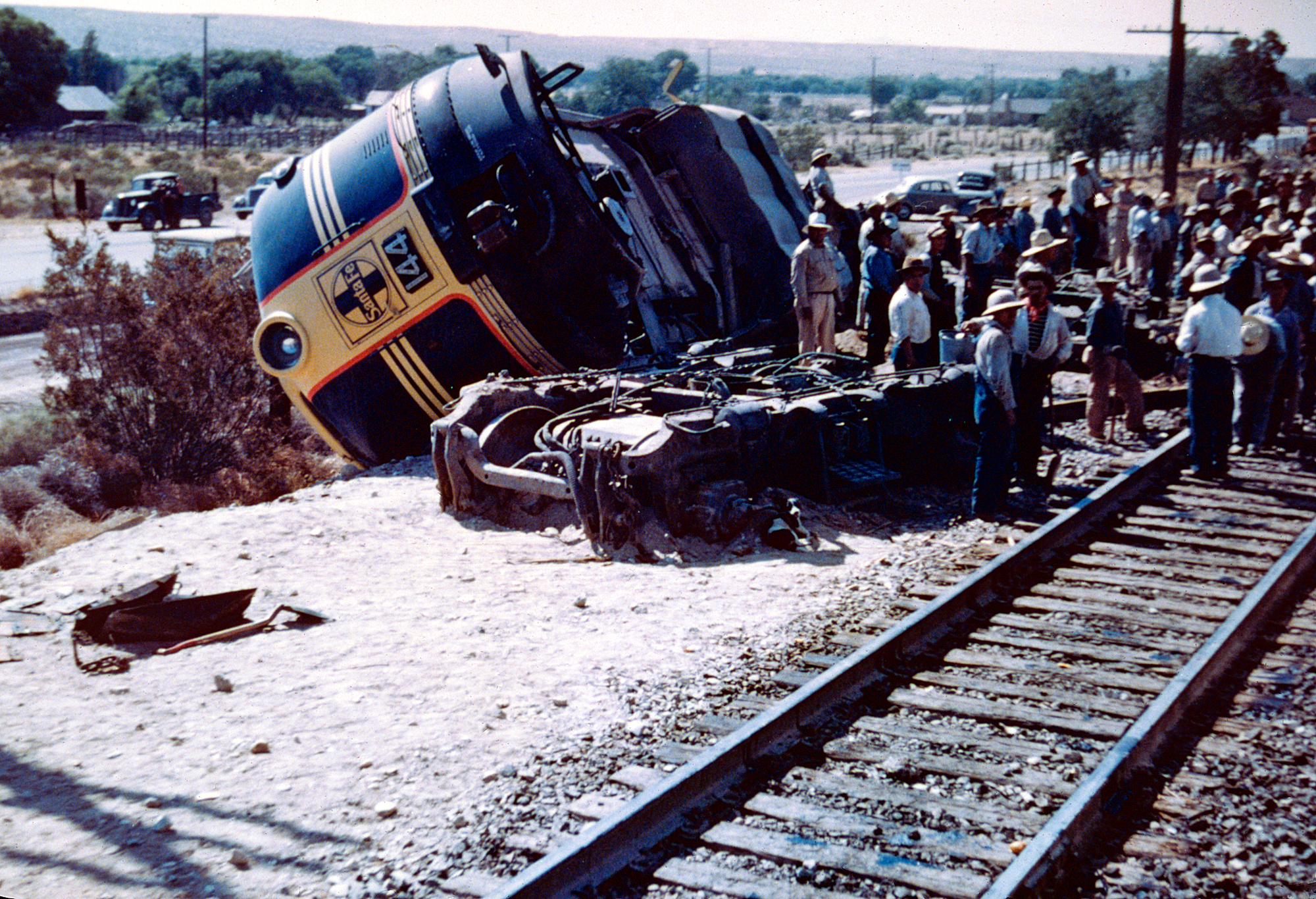 Santa Fe FT #144-L is off her trucks following a wreck/derailment at Oro Grande, California in July, 1945. The unit, just over a year old in this photo, was later returned to service. She was eventually traded in to EMD for new GP30's. Russ Cole photo. American-Rails.com collection.

The Denver & Rio Grande Western Railroad eventually purchased it in 1988, which assumed the Southern Pacific name.

In 1996 both of these venerable railroads disappeared into the Union Pacific fold.

Although the SP disappeared in the 1990s it left behind, and is famous for, several California railroad landmarks.

From point to point the Sunset Route connects New Orleans with Los Angeles!

In all the Southern Pacific would grow to a system of over 15,000 miles in length, almost twice the size of the Union Pacific prior to the merger movement.

The SP is also noted for its Donner Pass in the Sierra Nevada Range and Tehachapi Loop near Tehachapi, California. 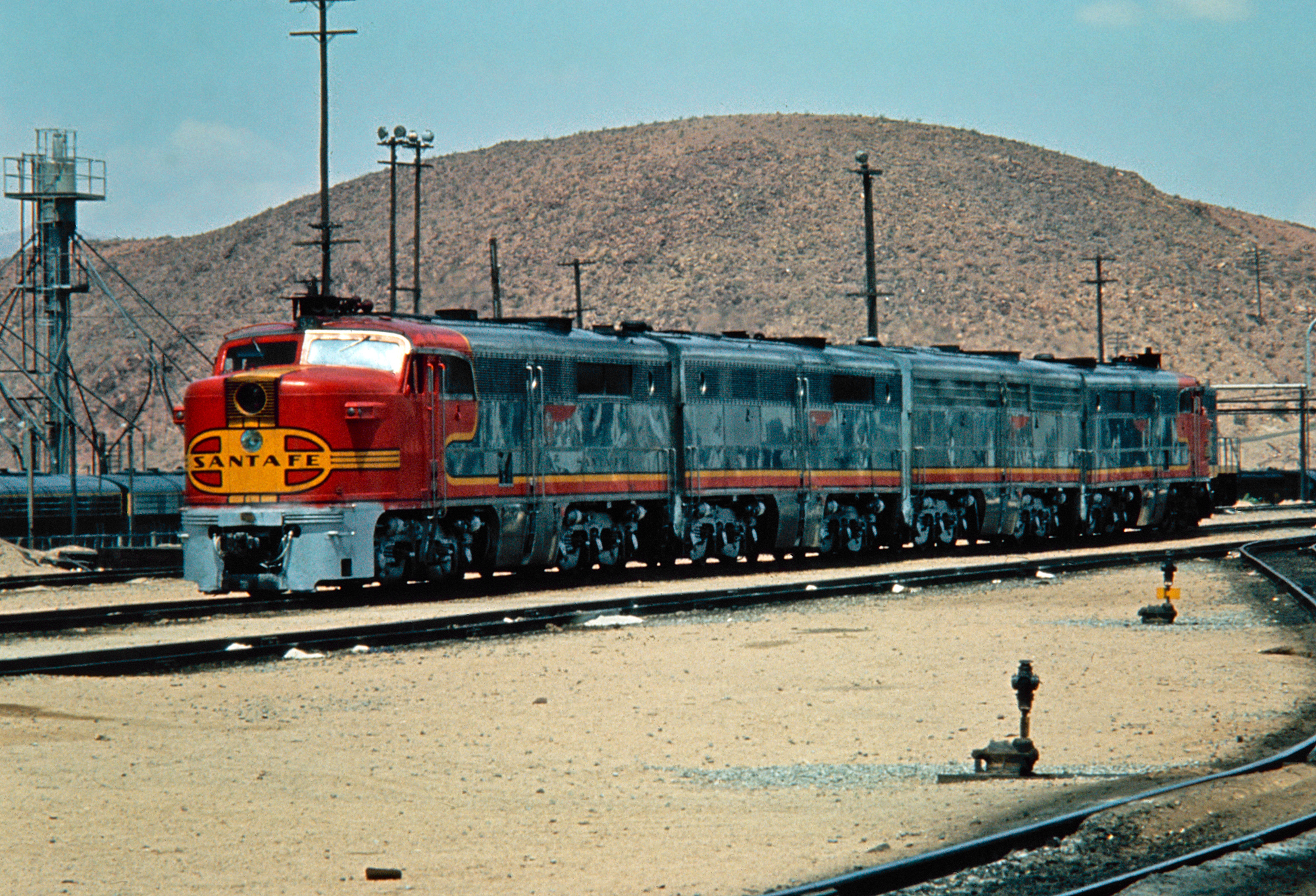 A Santa Fe PA-PB-PB-PA set lays over in Barstow, California during the 1960s. Closest to the photographer is PA-1 #52-L. American-Rails.com collection.

For all of its prestige in relation to California the Southern Pacific, of course, was not the only well-known railroad operating in the state.

The Western Pacific was another famed railroad to be found within California's borders.

The smallest of California's classic large systems, its Feather River Canyon main line between Reno and Sacramento (in all it connected the Bay Area with Salt Lake City, Utah) is arguably the state’s most beautiful route and it is still operated today by Union Pacific as an important main line.

Prior to the merger movement the Union Pacific did not have much of a presence in California although its main line connecting Salt Lake City and Los Angeles did provide the railroad with important sources of traffic and continues to do so even today. 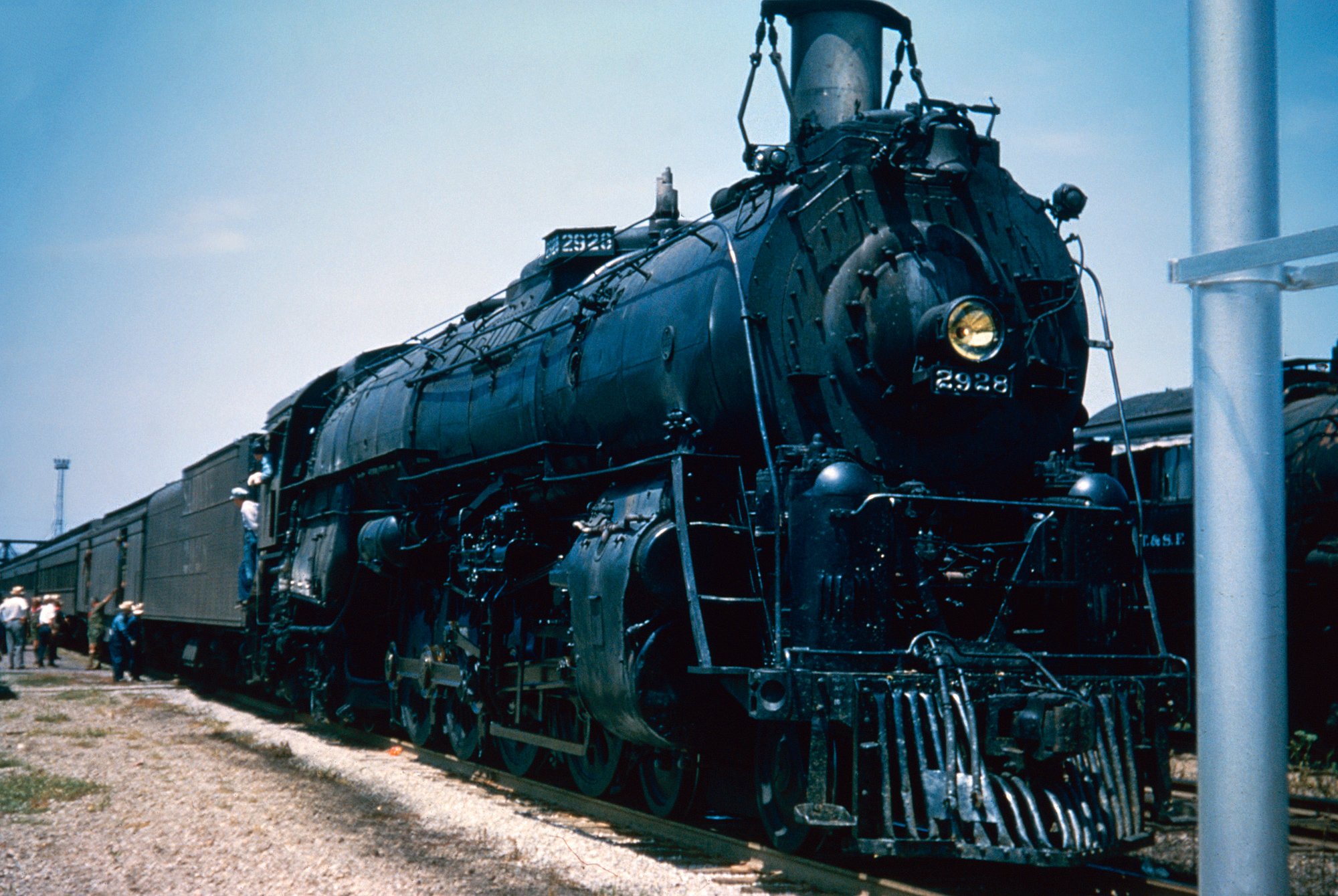 Santa Fe 4-8-4 #2928 has arrived in Los Angeles with Boy Scouts bound for the National Jamboree being held that year in nearby Irvine; July, 1953. The kids would complete the trip by bus to the campgrounds. American-Rails.com collection.

Last, but certainly not least, was the Atchison, Topeka & Santa Fe Railway.

It was the Southern Pacific’s main competition in California and the Southwest as the two railroads competed for much of the same traffic.

The legendary Santa Fe system was massive stretching from Chicago to western Louisiana, as well as San Francisco and Los Angeles, although its Californian routes were never quite as strategic as the Espee’s.

The Santa Fe’s most well known California railroad landmark is Cajon Pass in the San Bernardino mountain range in the southern part of the state.

The ATSF is also celebrated for its many mission-style depots and stations it built in the southwest, including California. Today, Santa Fe’s lines in the Golden State are operated by its successor the BNSF Railway. 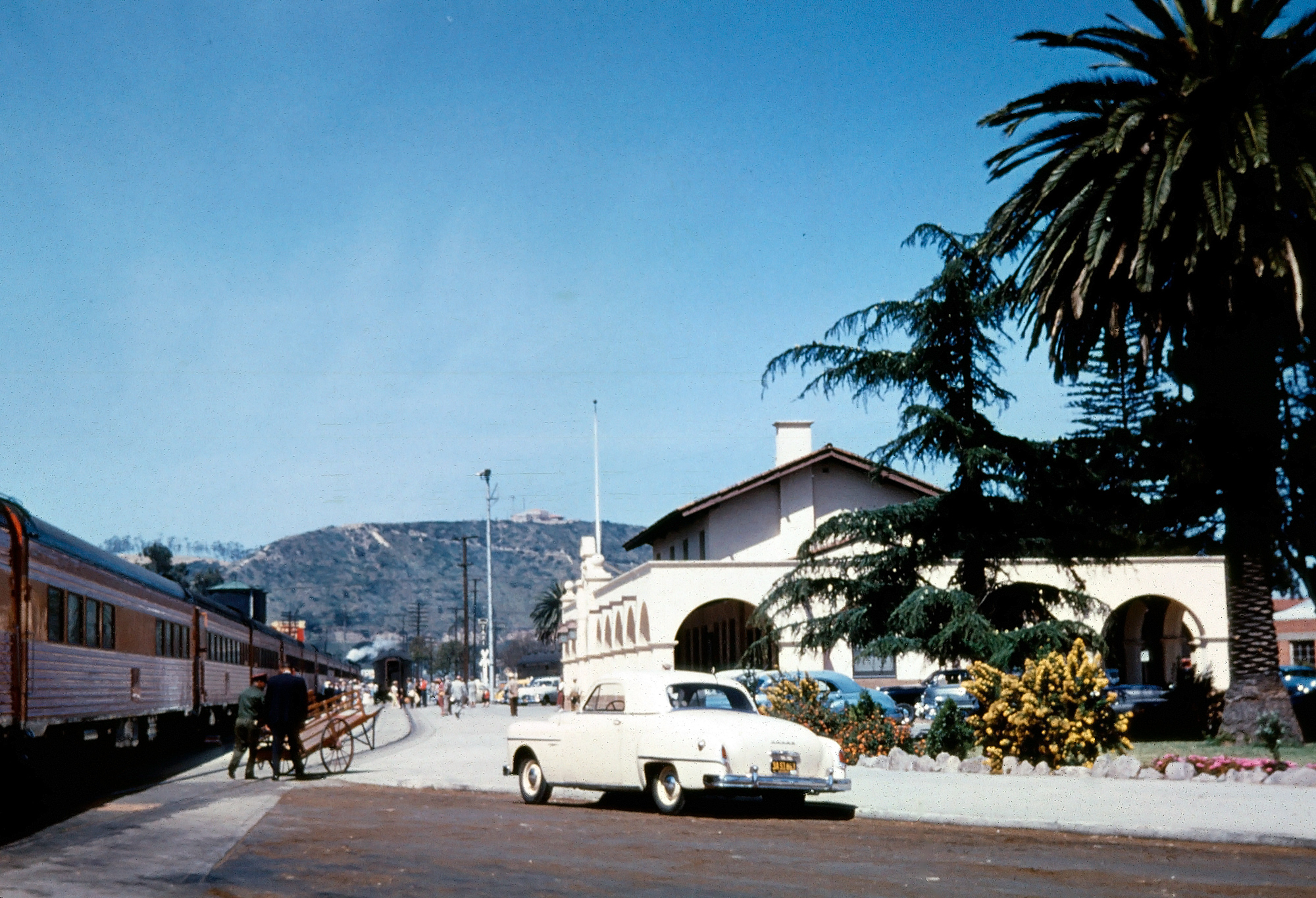 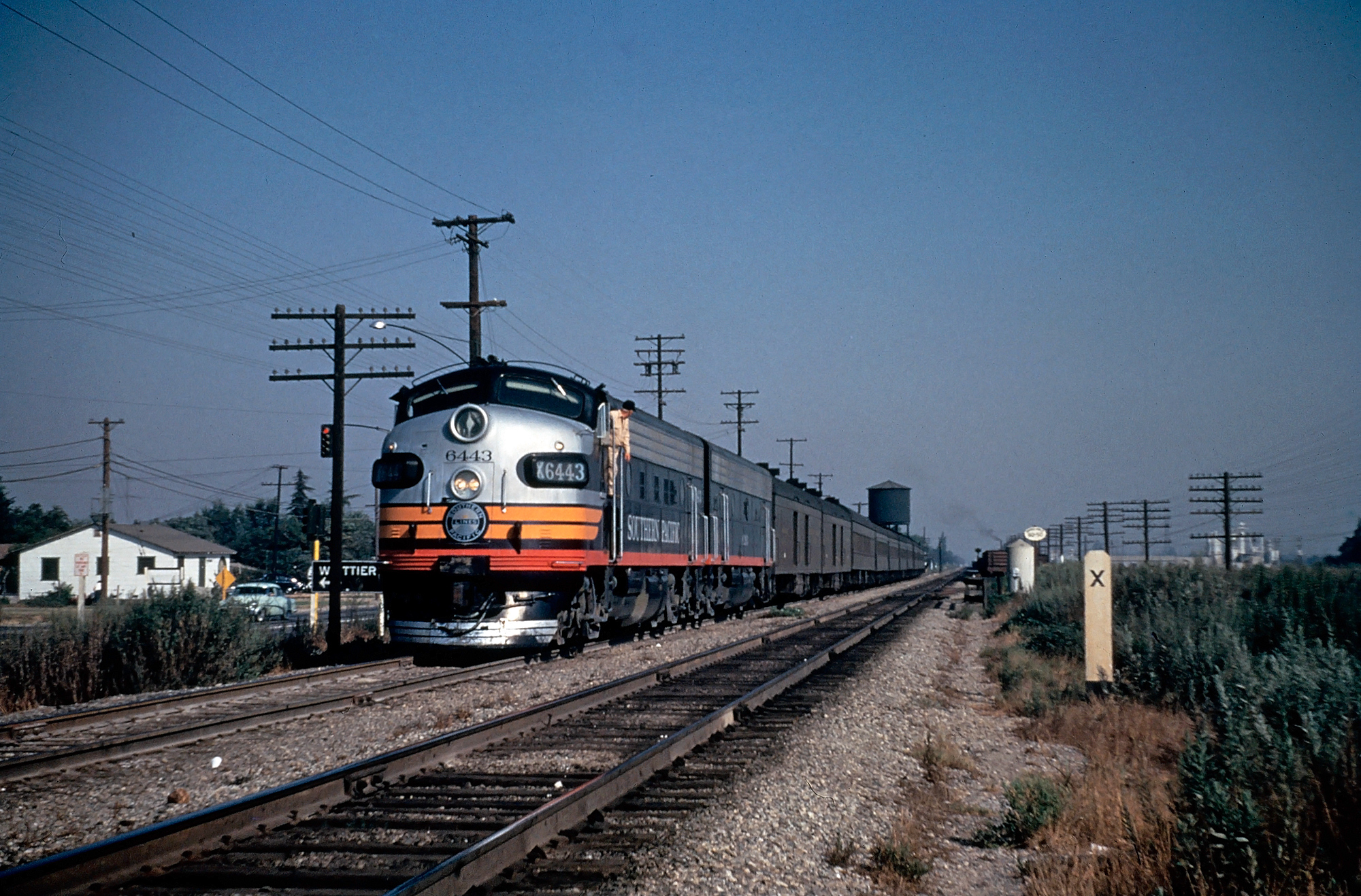 Freight railroading aside, if you are a vacationer looking for places to visit or just a railfan who loves trains, California includes several museums and tourist lines.

Some of the state’s most recognized museums and tourist railroads include:

The state is a leader in commuter rail and one reason behind this is its attempt to find ways to reduce its large amounts of carbon monoxide emissions, mostly from highway traffic. 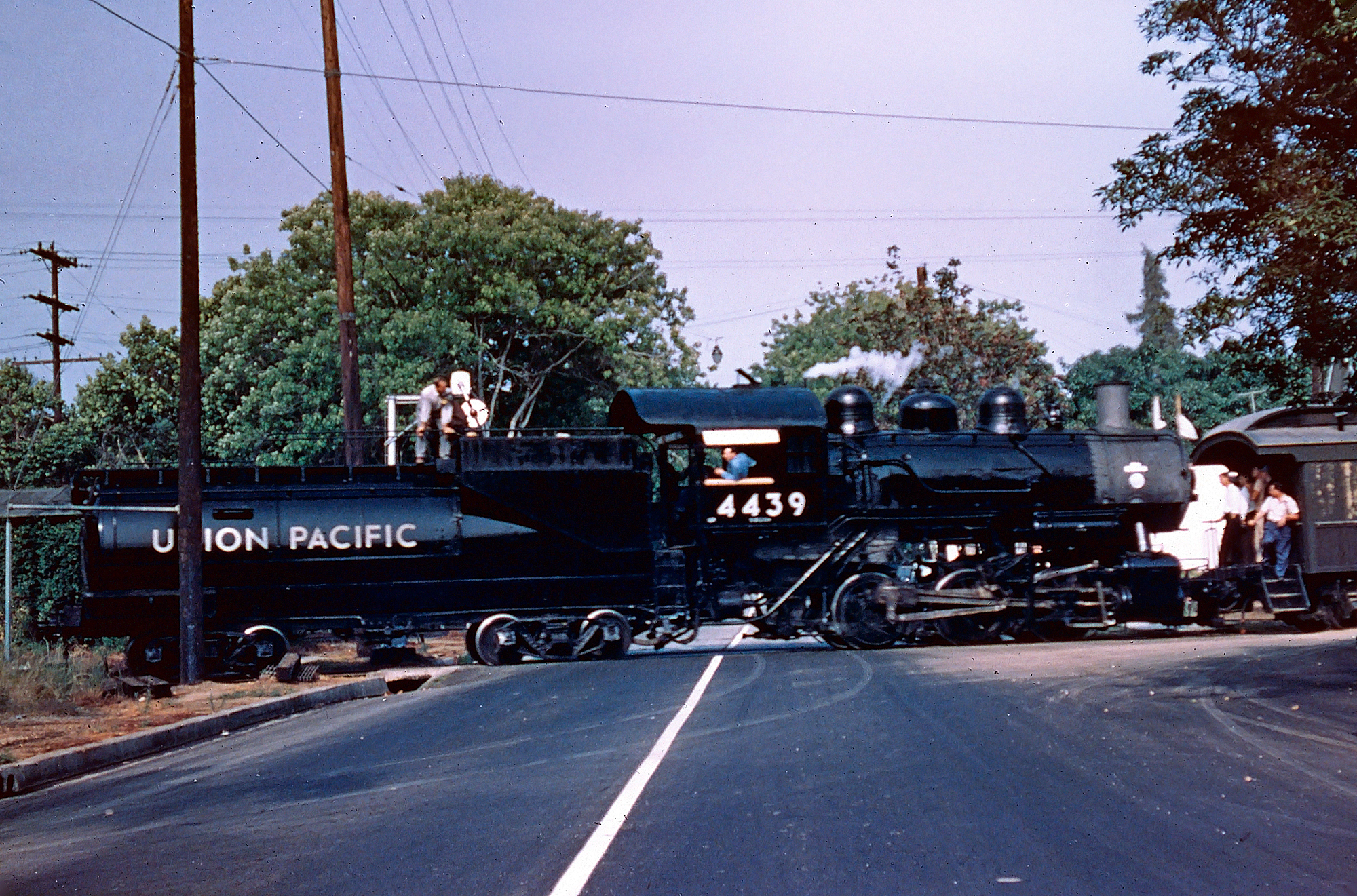 Of course, the state is also home to plenty of local services like Amtrak’s Surfliner and Capitol Corridor operations part of the passenger carrier’s and state’s Amtrak California services as well as San Francisco’s famous trolley system.

In all, California offers a multitude of things to experience and see so my advice is to simply find what interests you the most and start there first!

Whether it is the famous engineering marvels like Tehachapi and Cajon or railroad museums like CSRM and the famous Napa Valley Wine Train, there really is something for everyone in California.

Most importantly, whatever you might decide to do first, if and when you visit the Golden State, just remember to have fun!