Its more prominent services evoked names synonymous with New England such as the Quaker, Bostonian, William Penn, Roger Williams, Pilgrim, and others.

There was also the Yankee Clipper, a train established during the Depression era providing upscale services, comparable to the flagship Merchants Limited, between New York and Boston along the very busy Shore Line.

As speeds increased the Clipper eventually boasted a schedule of just 4 hours.  Amtrak's services of today pale in comparison to this era when one could enjoy lounge accommodations, dining services, and even parlors.

It was the preeminent way to relax and enjoy one's journey between the two cities.  It wasn't just the New Haven, however; one could enjoy similar services all along the East Coast between D.C. and Boston.

One section of the Yankee Clipper was later canceled in the early 1960s while the other survived until the Penn Central merger and continued on until Amtrak.

The New Haven system was formed through the merger or takeover of numerous predecessor roads that Mike Schafer notes in his book, "More Classic American Railroads," totaled more than 200!

Perhaps the original promoters of the New Haven did not intend for the Boston to New York corridor to become its most important route but that's exactly what happened, particularly after J.P. Morgan became involved.

The 229-mile Shore Line was further strengthened by the addition of electrified operations west of New Haven, Connecticut and a direct rail connection into Manhattan after 1917, via the Hell Gate Bridge, which provided access to both Pennsylvania Station (Pennsylvania Railroad) and Grand Central Terminal (New York Central).

The Yankee Clipper joined the NYNH&H timetable on March 18, 1930, oddly during the height of the Great Depression.

According to Peter Lynch's book, "New Haven Passenger Trains," its ran with 17 cars capable of carrying 170 passengers with all-Pullman accommodations including a buffet-parlor-lounge, two parlors (with drawing rooms), a 36-seat diner, two standard parlors, and an observation lounge (with parlor seats and a drawing room).

One simple but elegant promotional piece from the train's debut mentioned the following: "The Yankee Clipper, Aristocrat Of Trains, 4 3/4 hours Boston-New York, The New Haven Railroad."

Adorned at the top of the advertisement was a clipper ship.  Early in the train's career it was led by a Class I-4 Pacific but later more powerful Class I-5 Hudsons took over such assignments.

Launching the Clipper during the depression did have its setbacks, as Mr. Lynch notes; in 1932 lack of demand resulted in the consist fielding only five cars and within a year it appeared the train might even be canceled.

However, it was able to weather these setbacks, in part due to a change in the schedule; for many years it left each city at 3:30 PM in the afternoon but switched to an early departure of 1:00 PM, which was made permanent. 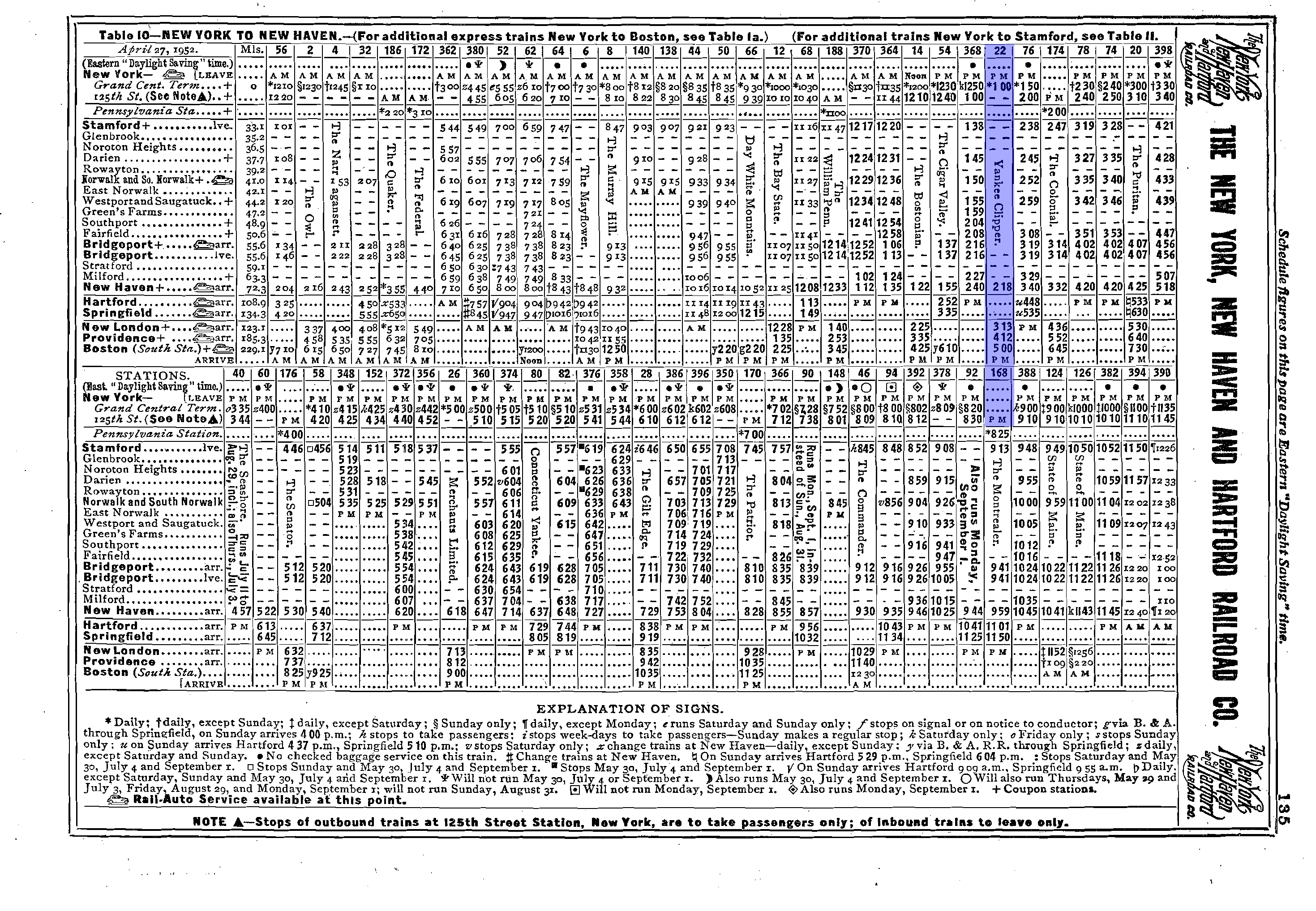 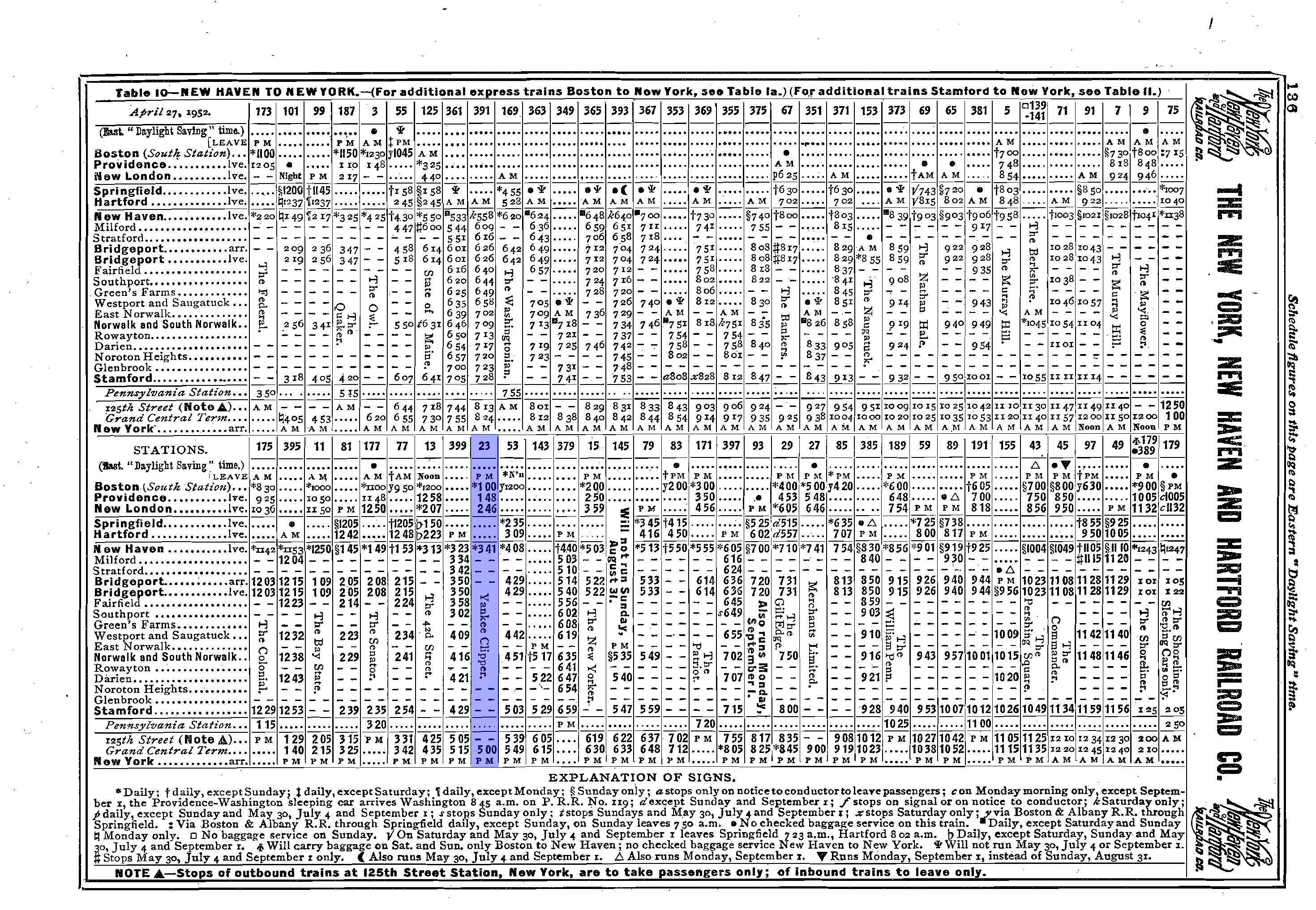 During the mid-1930s New Haven began experimenting with newfangled streamliner technology.  It helped develop, in conjunction with engineer Walter Teague and Pullman-Standard, the lightweight, smooth-sided "American Flyer" car of 1934.

The road went on to roster more than 200 of these cars.  A year later in 1935 the new Comet streamlined trainset entered service between Providence and Boston.

After World War II the railroad continued its purchase of lightweight equipment, acquiring 207 new cars from Pullman by 1954 sporting fluted stainless-steel and costing a staggering $20 million.

Mike Schafer and Joe Welsh note in their book, "Streamliners: History Of A Railroad Icon," the new cars offered passengers lots of room to stretch out with a modern interior and large windows for maximum viewing.

The New Haven also began acquiring large batches of new diesels after the war; first Alco PAs and then later Fairbanks Morse CPA24-5s along with dual-service, Electro-Motive FL9s in the late 1950s.  Unfortunately, the decade was hard on the New Haven.

It derived nearly half its revenue from passenger service and ridership declined significantly at this time.  Additionally, new management, first under Frederic Dumaine in 1948, and then later Patrick McGinnis, witnessed schedules slow and services generally degrade as vast cost-cutting measures were implemented.

Dumaine would pass away and McGinnis was later ousted but the railroad never again posted a profit after 1956.  The westbound Yankee Clipper was discontinued during October of 1962 while its eastbound counterpart survived through the Penn Central merger and made its final run on April 30, 1971.