California logging railroads were some of the most prolific operations found anywhere in the west along with those lines in Oregon and Washington.

Virtually all of the state's railroads were located in the northern regions (and some even operated into southern Oregon) where there were, and still are, vast reserves of evergreen timber.

It's somewhat interesting the nostalgia that California logging railroads still hold for many. For instance, a number of folks have built large, elaborate, and highly detailed model railroad layouts which showcase these unique operations.

Today, you can even ride on original lines in the state once used for the timber industry such as the famed Skunk Train. In any event, the information below provides a brief history of these operations. 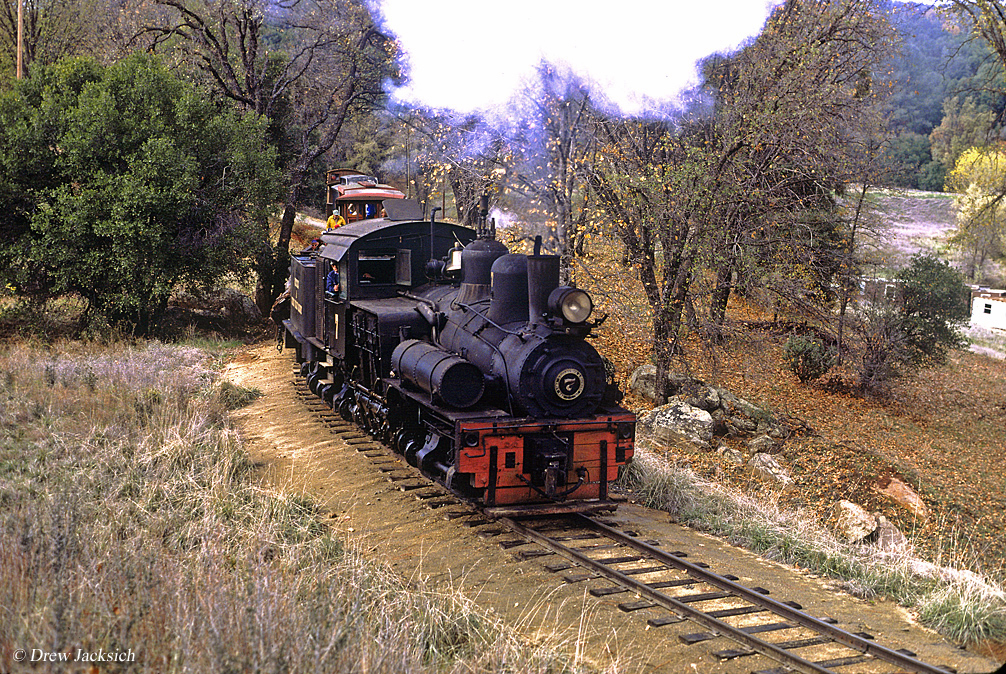 The Arcata & Mad River Railroad had a history that dated as far back as December, 1854 to connect Arcata (located just north of Eureka it was then known as Union) with the Humboldt Bay.

It was originally powered with horses and used strap-iron rails, partly due to the fact that the general railroad network had yet to be completed in the west (it would not happen until 1869).

By the latter 1870s the small line was purchased by the Arcata Transportation Company which renamed it as the Arcata & Mad River Railroad in late June, 1881 and proceeded to convert the operation to steam power and lay modern "T"-rail.

While the railroad hauled freight such as agriculture its new role was primarily one of serving the Northern Redwood Company's lumber mill at Korbel.

At this time the company was expanded to an operation of about 8 miles and regularly hauled logs to the mill. The line was a long lasting affair and remained in regular use until May 24, 1985 having been owned in its final years by the Simpson Timber Company.

Other Logging Lines Across The West

A History Of Montana's Many Logging Lines

New Mexico, Logging In "The Land Of Enchantment"

The Northwestern Pacific became the largest timber railroad in the west moving vast amounts of Redwood.

However, it was not a true logging line in the sense that much of its freight traffic was mixed and diversified (and it also operated interurban service until 1941).

The NWP was a creation of the Southern Pacific and Santa Fe railroads, created in 1907 and either purchased or took over more than two dozen systems in northern California stretching from south of Willits to well above Eureka.


The NWP was a long lasting enterprise until it was finally merged into parent Southern Pacific in 1992. Today, part of the railroad is again operational as a short line system.

Today, the California Western Railroad is a popular tourist attraction known as the Skunk Train. However, its history dates back as the Fort Bragg Railroad, which began operations in 1885.

It was built by the Fort Bragg Redwood Company to haul Redwood logs from Glenela to its new lumber mill near Fort Bragg, around 7 miles away.

In 1904 the operation was taken over by the Union Lumber Company, which renamed its railroad as the California Western Railroad & Navigation Company and vastly expanded the operation by building a 34 mile westward extension to connect with the Northwestern Pacific at Willits.

In 1947 the company was simply called the California Western Railroad and the following years passed into the hands of various owners such as Boise Cascade and Georgia-Pacific Corporation.

In 1987 it was sold to Mendocino Coast Railway but as mill operations were slowly cutback the railroad was no longer profitable. 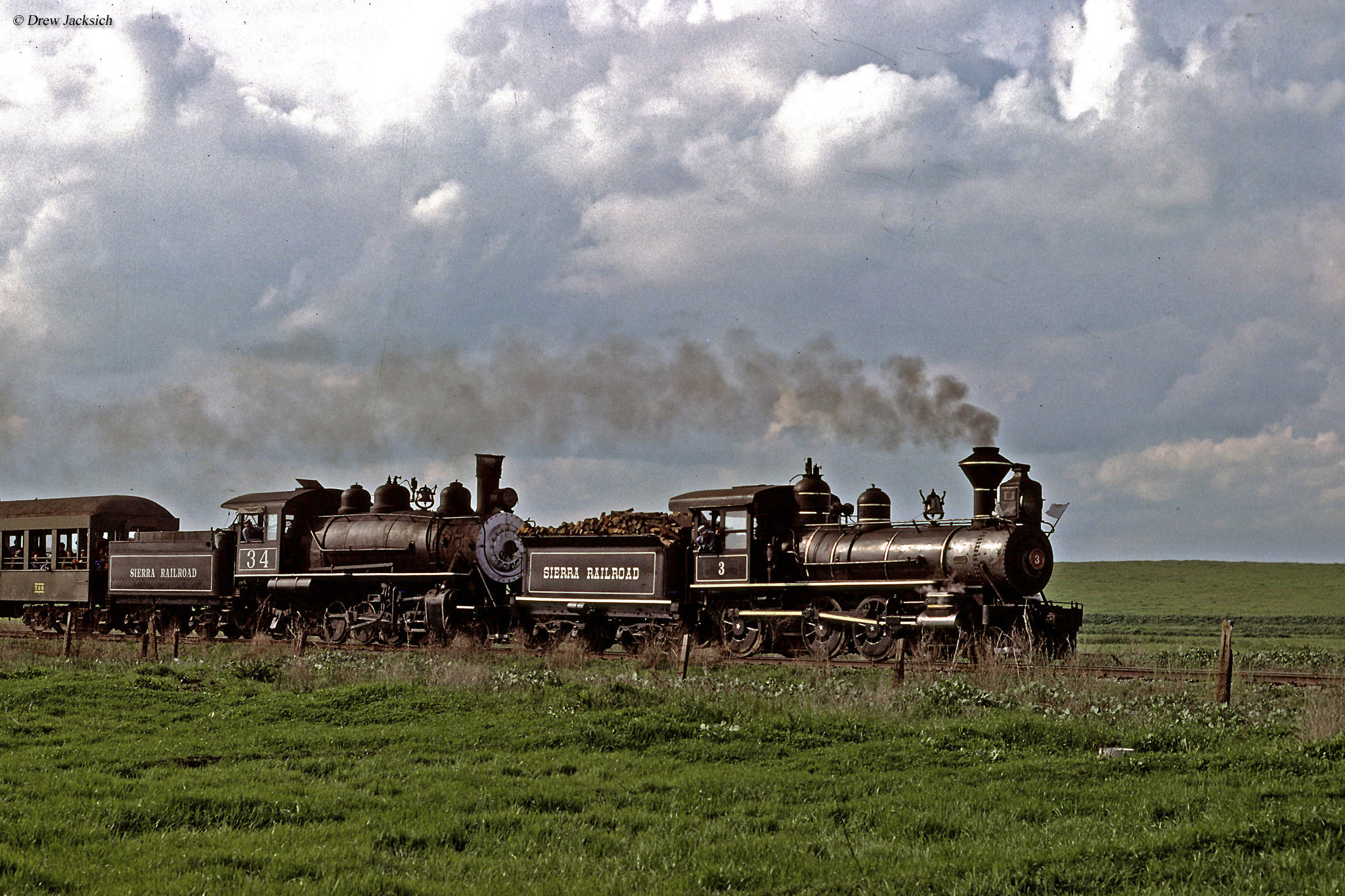 The McCloud River Railroad became one of the state's most well known lines. The line was chartered on January 22, 1897 and eventually grew into a 115-mile system, which moved a variety of freight.

However, it was always primarily based in the movement of logs and timber, notably Redwoods, and began service on a 18-mile stretch between Mount Shasta and McCloud. At its peak it reached Bartle, Hambone, and Bieber where it connected with the Great Northern.

Until 2005 the railroad continued to service the lumber mill at McCloud although by the time it also handled other timber freight such as particleboard and plywood. Today, part of the system is still in use although no longer under the original name. 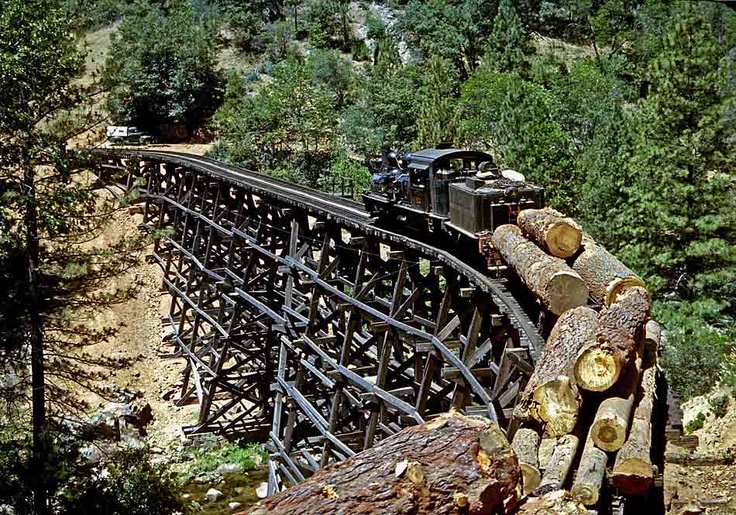 A view of the West Side Lumber's operations when in service.

The West Side Lumber Company was perhaps the most fabled operation in California, over the years numerous books and model railroads have been dedicated to its history.

It began operations in 1900 as the West Side Flume and Lumber Company, started by Thomas Bullock, and William and Henry Crock who purchased a ranch near Tuolumne.

Additionally, they purchased 55,000 acres of nearby virgin timber and constructed a vast mill complex nearby.

To move the logs to the mill a narrow-gauge steam railroad was built. Interestingly, however, after just a few years of operation it was sold to Wisconsin interests in 1903 who vastly expanded the operation but renamed the business as simply West Side Lumber Company.

After 1925 the operation was owned by the Pickering Lumber Corporation. At its peak the railroad featured Shays, Heislers, and small O-4-0T Porters. Including a few standard gauge locomotives overall the company owned a fleet of 20 locomotives.

West Side has the distinction of being the longest operated narrow-gauge logging railroad in the country when operations were finally discontinued in 1968 after a second fire destroyed the mill. Today, much of the original railroad remains as it was 50 years ago, dormant and not in use.

The Sierra Railroad, founded by Thomas S. Bullock, was not a true logging line although timber traffic did make up a large staple of its revenue.

The railroad began service on November 8, 1897 where it connected with the Santa Fe at Oakdale and hauled a wide range of other traffic from ore and regular passengers to live stock. Today, the company is still in operation as both a tourist operation and regular short line.

The Pacific Lumber Company was one of the state's largest operations and owned vast timber acreage around Eureka.

The earliest history of the company dated back to 1863 although it did not charter its first railroad until November, 1882, the Humboldt Bay & Eel River Railroad.

It began operations in 1885 and served the company's large mill at Scotia, moving finished timber to Humboldt Bay and loading onto sailing ships.

In 1903 Pacific Lumber was taken over by the Santa Fe, and merged with its San Francisco & Northwestern Railway, although it continued to operate as a timber company in the region.

The HM&ER became part of Santa Fe's Northwestern Pacific Railroad in January, 1907, and the original route remained in use through the 1970s.

This operation was owned by the Caspar Lumber Company located in California's Mendocino County, which had a history that dated back to 1880 although a sawmill had been situated along Caspar Creek since 1861.

However, Caspar did not charter its first railroad until 1903, the Caspar, South Fork & Eastern and for the 20+ years prior to that mostly relied on crude early rail line that utilized light steam donkeys and regular horses and oxen to move logs on strap rail (the rail line dated back to the mid-1870s).

The CSF&E was meant to connect to the Northwestern Pacific at Willits but never reached the town for interchange purposes.

However, it was able to complete about 15 miles of railroad picking up logs from what became known as Camp 1 along the South Fork Noyo River to the sawmill.

The milling operations remained in use until the mid-1950s but a labor strike closed it ten years earlier in December, 1945 at which the railroad shutdown permanently.

Most impressive of the fleet were two 2-6-6-2 Mallets built by the Baldwin Locomotive Works, #5 and #7. The entire fleet was scrapped by 1958. 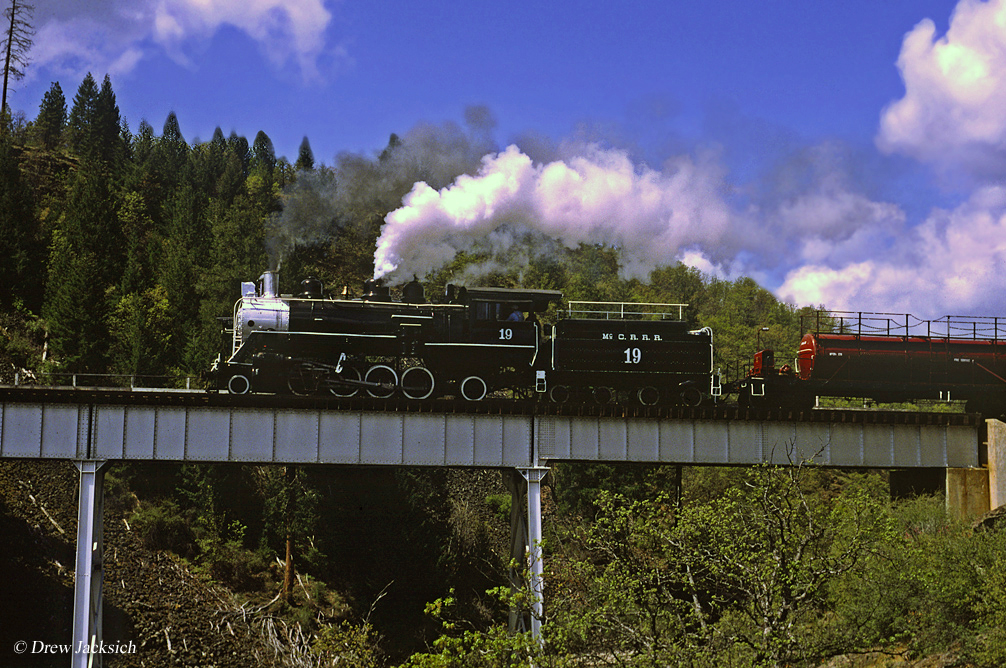 The Yreka Western Railroad was not really a logging railroad although it inadvertently became one.

The line began as the Yreka Railroad of 1888, established by the town of Yreka to provide the city with rail service to the nearby Southern Pacific, which had chosen to link the area with the rest of its system.

In January, 1889 the railroad opened although it was only a few miles in length from Yreka to a connection with the SP main line.

While the railroad had vast expansion hopes costs precluded such and for the next 40 years it languished in financial trouble. In 1915 it was renamed the Yreka Western Railroad and in 1928 was sold to the Klamath River Holding Company.

By the 1930s the railroad was again in financial trouble but a construction boom of new sawmills in the region finally saved the company from bankruptcy. By the late 1950s some 13 mills were located along its lines.

The growth, however, was short-lived as regulations had put many out of business by the 1980s. In 2000 the property was purchased by the Rocky Mountain Mining & Railway Museum and today is operated as a tourist railroad.