Caltrain is another of California’s many commuter agencies serving the San Francisco region.

Fully funded and operated by the city of San Francisco, San Mateo County Transit District, and Santa Clara Valley Transportation Authority through the Peninsula Corridor Joint Powers Board it came about after the venerable Southern Pacific opted out of commuter rail service in the late 1970s.

Between 1980 and 1987 SP continued to operate commuter service to the San Francisco area under contract by the California Department of Transportation.

After 1987 the SP bowed out entirely and Caltrain began operating its own trains, connecting Gilroy with downtown San Francisco.

Since its inception the service has become very popular with several future extensions and upgrades already either in the planning stages or soon to happen. 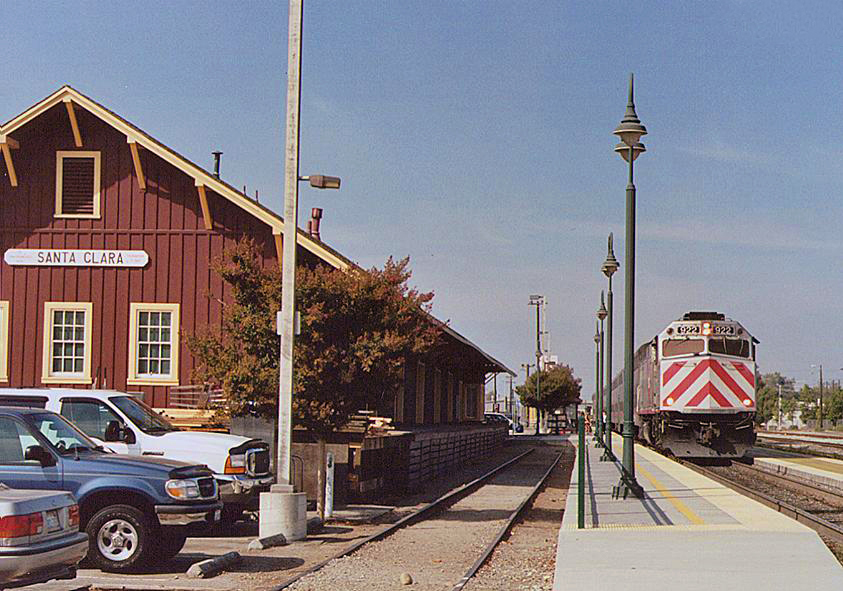 Caltrain F40PH-2 #922 heads southbound as it boards passengers at the station in Santa Clara on October 20, 2005. Doug Kroll photo.

Long before there were publicly-funded commuter rail systems, the private freight railroads provided such service in several of the large metropolitan regions around the country.  T

he city of San Francisco, and surrounding Bay Area, was one such location.  The historic Southern Pacific blanketed the state of California and served the Bay Area well with lines radiating north (Shasta Route), east (Overland Route), and south (Coast Line and San Joaquin Valley routes) out of area.

The current Caltrain system utilizes a section for the former Coast Line.

While this famous, 470-mile route which connected San Francisco and Los Angeles is perhaps best remembered for hosting the venerable Daylight streamliners, SP also provided extensive commuter service out of the Bay Area.

The "Peninsula Commute," as it was known, served the 47-mile corridor between San Francisco's gorgeous 3rd & Townsend Depot (since razed) and San Jose, now operated by Caltrain.

During the steam era the equipment usually featured standard commuter coaches while power ranged from 4-6-2 Pacifics to 4-8-4 Golden States. 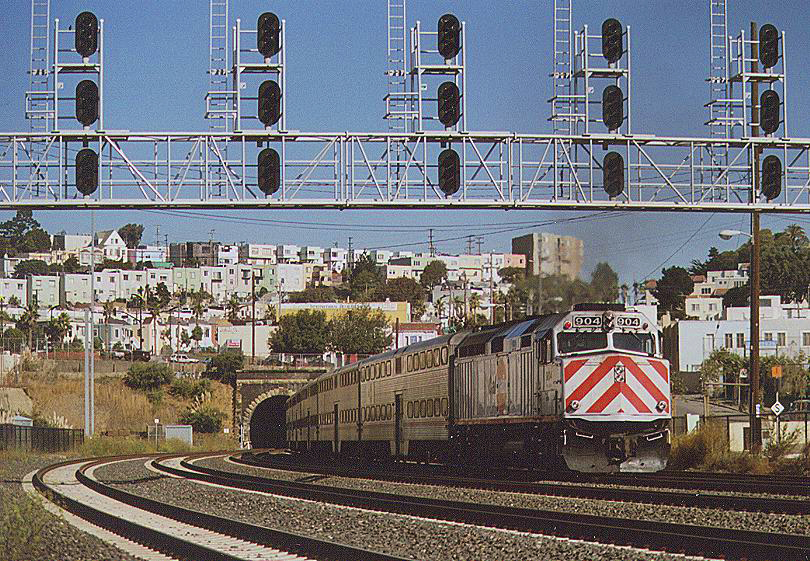 However, in the 1950s several changes were implemented; first, steam was replaced by diesels in the form of Fairbanks Morse H24-66 "Train Master" models.

These big, burly machines were the most powerful diesels on the market when first introduced in 1953 offering 2,400 horsepower.

Most railroads came to dislike the design on the basis of its opposed-piston prime mover but SP found them perfect for commuter service where they offered quick acceleration that was ideal in such applications. 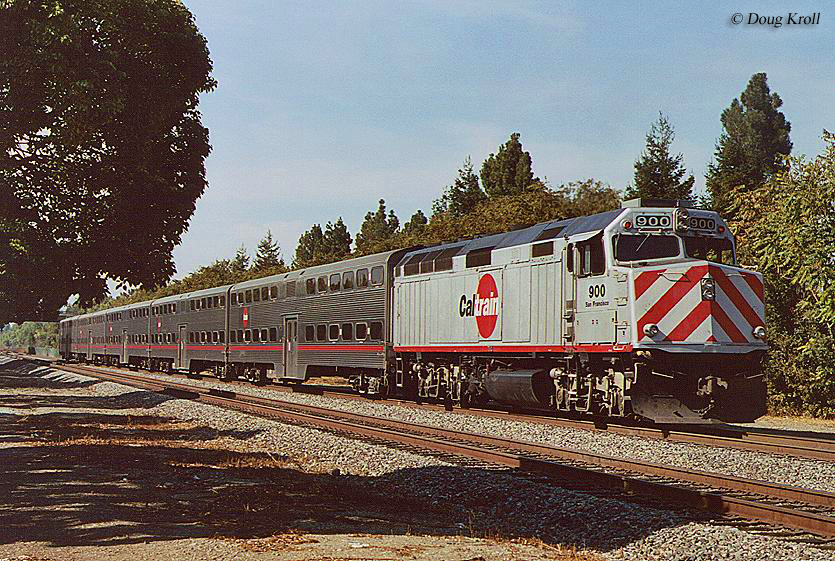 In all the SP acquired 46 of these cars that offered a modern look and more comfortable accommodations.  They were initially painted in a two-tone grey livery but during the 1960s received a more basic all-grey look.

Over the years the Train Masters were supplemented by other power from Electro-Motive SD9s and GP9s to FP7s and SDP45s (after 1967).

The SP had lost interest in passenger operations dating well back to the early 1960s as its trains were habitually losing money despite the road's best efforts.

Not surprisingly, it petitioned the Public Utilities Commission in 1977 to drop commuter service as well.  This move was partially granted in 1980 when the California Department of Transportation (Caltrans) moved to subsidize SP's service.

However, the state eventually felt it could operate the service itself.

To to so it purchased new equipment, introduced  shuttle buses, and upgraded stations to launch Caltrain in 1985.  In 1991 the state purchased the SP's line from San Francisco to San Jose in an effort to preserve future commuter service.

Soon after, then Caltrain operator the Peninsula Corridor Joint Powers Board (formed in 1987) contracted with Amtrak to operate the service while extensions south to Gilroy were implemented.

Over the years Caltrain has witnessed several upgrades and improvements:

An operational change also came in May of 2012 when Amtrak was replaced by new operator TransitAmerica Services, Inc. owned by Herzog Transit Systems.

The corridor is currently broken down into six different station zones and Caltrain currently provides dozens of trains running in each direction on a daily basis.

Such extensive operations are required to meet the needs of this area; as of 2010-2011 Caltrain's annual ridership (12,574,233) placed it as one of the state's busiest commuter systems.

Its current fleet of motive power includes several of Electro-Motive's F40PH-class passenger models as well as a batch of MP36PH-3C from MotivePower it acquired in 2006 for the new Baby Bullet service.

When Caltrans first launched it utilized a small fleet of classic GP9s handed down from Southern Pacific, which remained in use until as late as 2012. 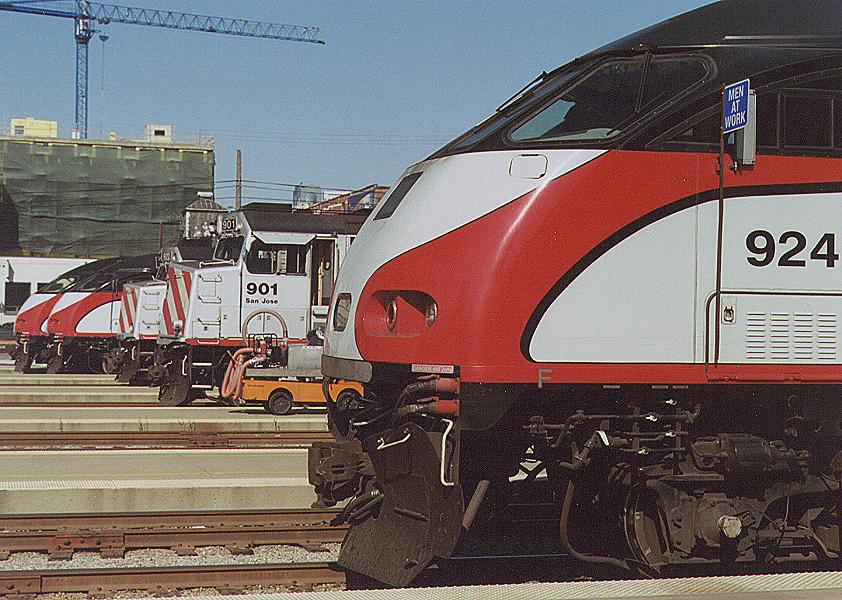 As ridership steadily inches upwards Caltrain has several plans for the future although it remains to be seen if any of these expensive projects actually becomes realty (they almost certainly, though, would result in higher ridership):