The Chicago, North Shore & Milwaukee Railroad (reporting marks, CNSM), fondly remembered as "The North Shore Line," was one of the most successful interurban systems ever put together.

The history of the company dated as far back as the 1890s and in terms of the passenger traffic it carried during its peak years of operations, only the Pacific Electric Railway rivaled it for the busiest interurban in history.

Unfortunately, the company's downfall was the plight of nearly all interurbans, the heavy reliance of passenger traffic could not sustain it forever and bankruptcy finally came after a long legal battle in the early 1960s.

The CNS&M once stretched from downtown Chicago to Milwaukee although today nearly nothing of this vast interurban remains with just a few segments remaining in use for Chicago commuter service.

There has, however, been talk by the state of Wisconsin to revive much of its section of the North Shore for renewed commuter service but this has plan has never been implemented to date. 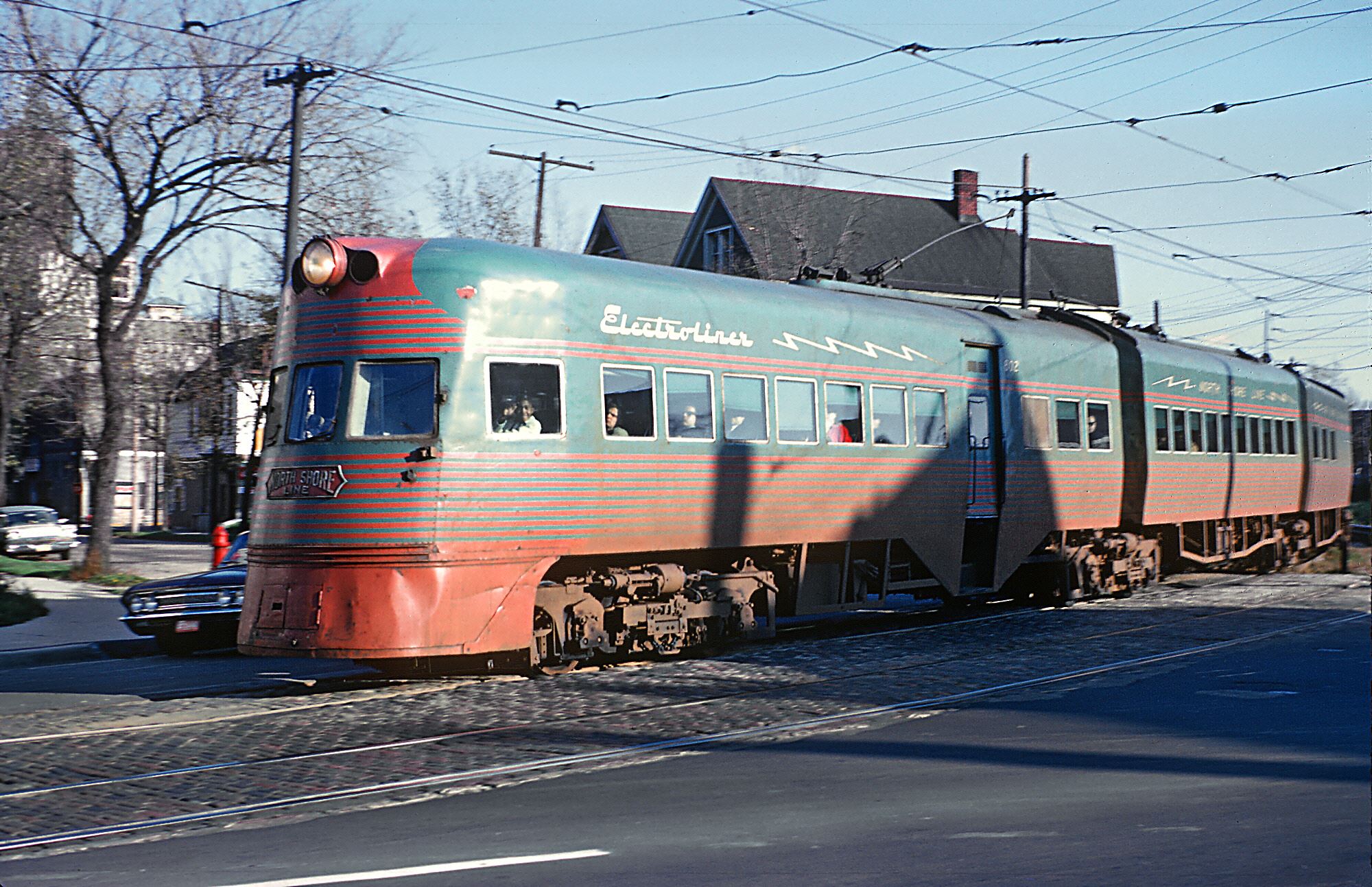 The history of the North Shore Line begins in 1891 when the Waukegan & North Short Transit Company was chartered to operate a small street railway in Waukegan, a suburb of Chicago.

A year later in 1896 the line was built further to 22nd street, and two year later in 1898 reach Highland Park. It was then that the company was reorganized as the Chicago & Milwaukee Electric Railroad.

With the interurban industry exploding at the turn of the century and lines being built all over the Midwest, the C&ME also began a vast expansion.

In 1899 it continued its line from Highland Park to Evanston, 10 miles away via a short subway built underneath the tracks of the Chicago & North Western Railway.

This section opened for service on August 6th of that year. In 1903 the company built its only true branch line when it completed a route to Libertyville from Lake Bluff, and by 1905 this had reached Mundelein.

From this point the focus became pushing the interurban northward to finally reach its other namesake city, Milwaukee. In September, 1906 service was established to Racine and a year later the C&ME had reached Milwaukee. 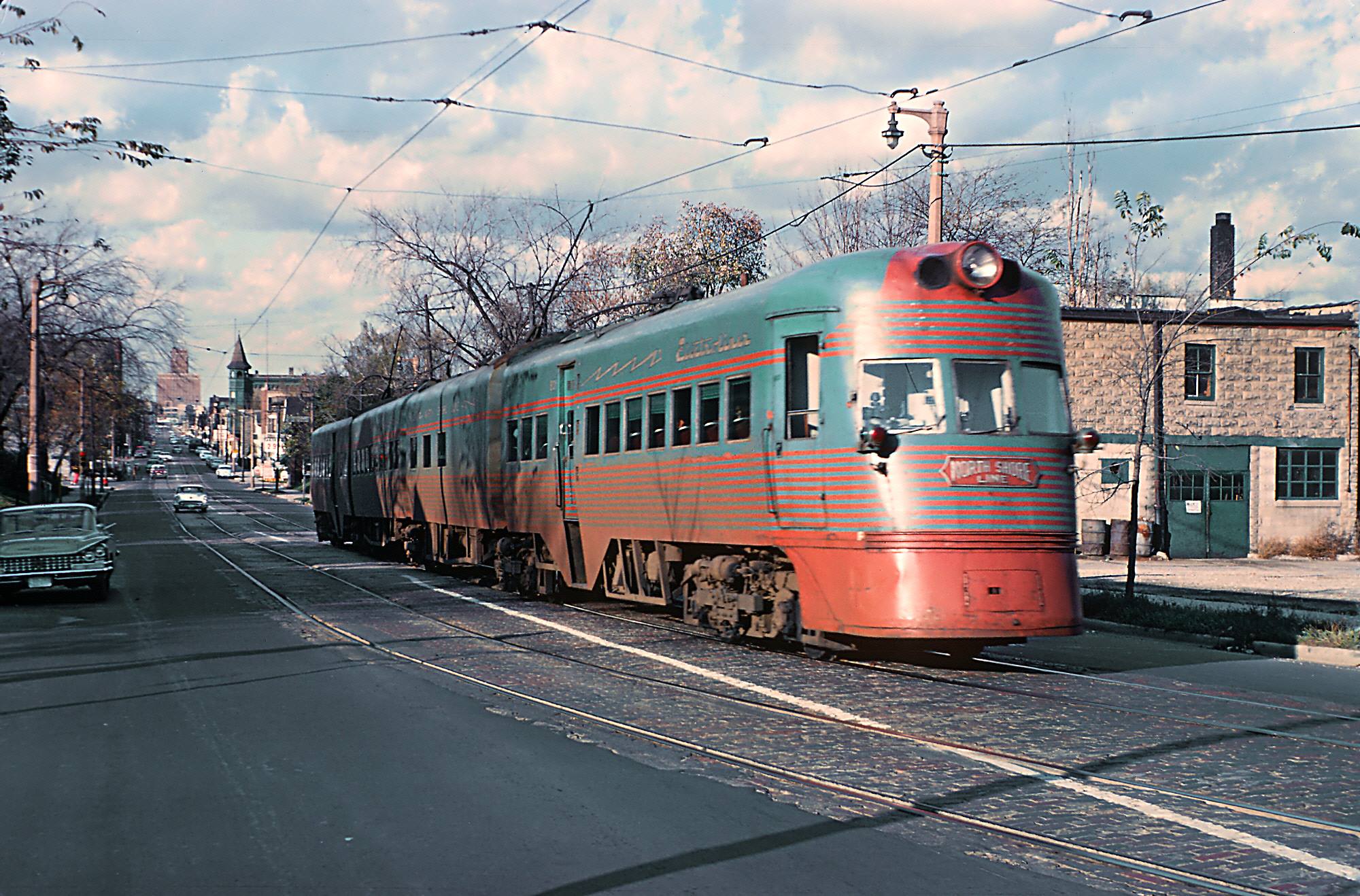 Unfortunately, the company found itself in financial trouble by 1908 due to its quick growth but lack of enough supporting revenue to keep it solvent.

Additionally, the financial panic of 1907 certainly did the company no favors and further hurt its bottom line. It was then that the interurban came under the control of Sam Insull, one of the industry's early tycoons who owned dozens of lines all across the Midwest.

Insull reorganized the operation as the Chicago, North Shore & Milwaukee Railroad in 1916 and sought to vastly expand the company with the first interest being towards finally serving downtown Chicago.

To do so the North Shore Line used trackage rights over the Milwaukee Road and Chicago Elevated along the Loop with service officially beginning August 6, 1919. 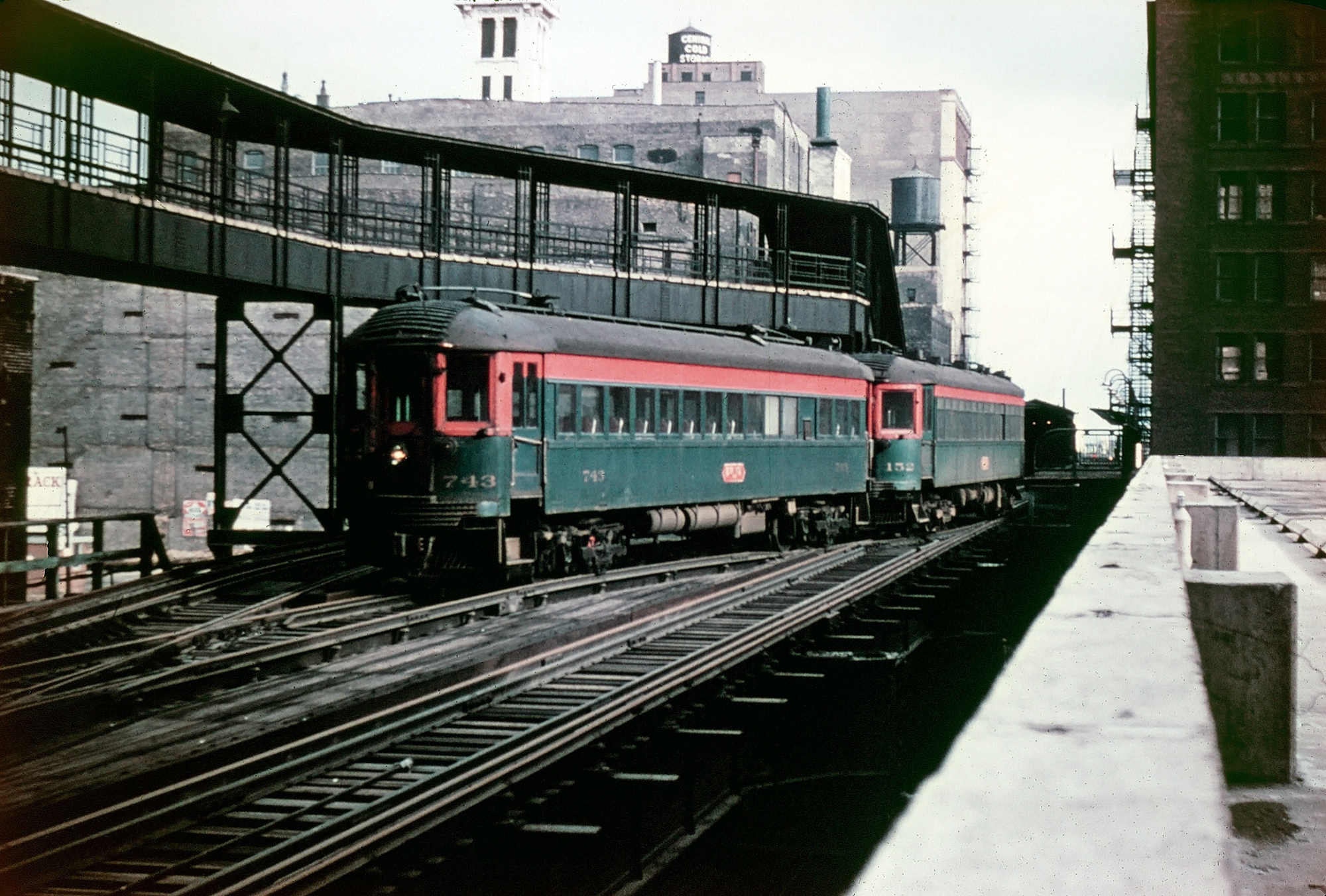 North Shore Line cars #743 and #152 work the Loop in downtown Chicago during the 1950s. American-Rails.com collection.

Aside from the points already mentioned above the North Shore Line connected suburban towns such as Zion, Wilmette, Winnetka, Glencoe, Kenilworth, and Highwood.

In Wisconsin the line served such communities as Kenosha along with the aforementioned Racine. After achieving entrance into the downtown regions of the Windy City the CNS&M would grow no further in terms of system expansion. Instead, it spent the 1920s upgrading its property.

Its electrified lines used a combination of 600 volt direct current (DC) third rail (around Chicago) and 650 volt DC overhead catenary. It double-tracked all of its lines in Illinois and at its height the North Shore only a had a short stretch of its main line in Wisconsin that was single-track. 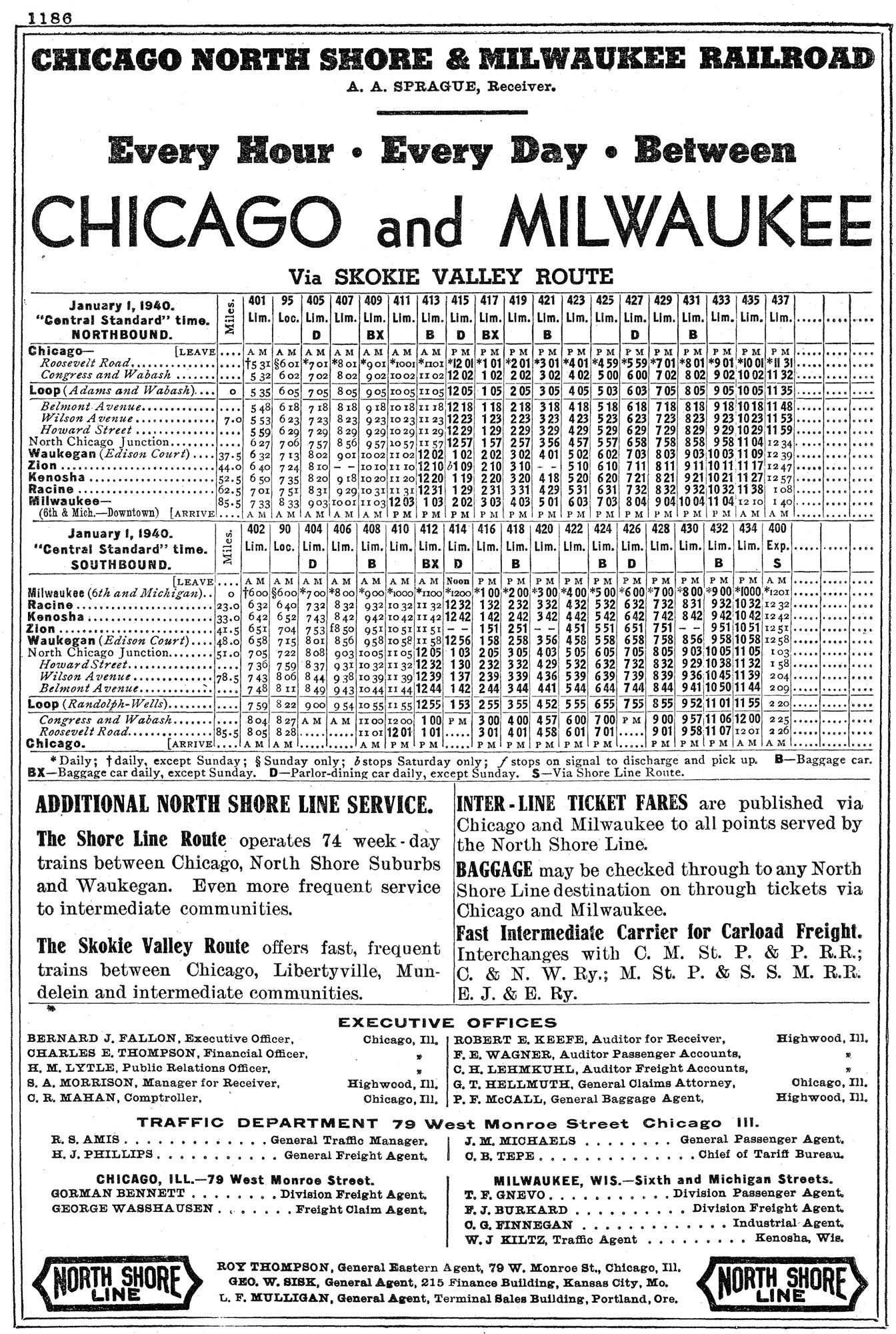 A condensed, 1940 timetable of the Chicago, North Shore & Milwaukee.

Its biggest undertaking was the construction of a new bypass about five miles west of its shore line which allowed the interurban to escape the numerous suburban communities and increase running times.

The area was known as the Skokie Valley, and the route that was built was dubbed the Skokie Valley Line. Construction on the new route began in April, 1924 and commenced from the Howard Street station roughly paralleling the original main line. 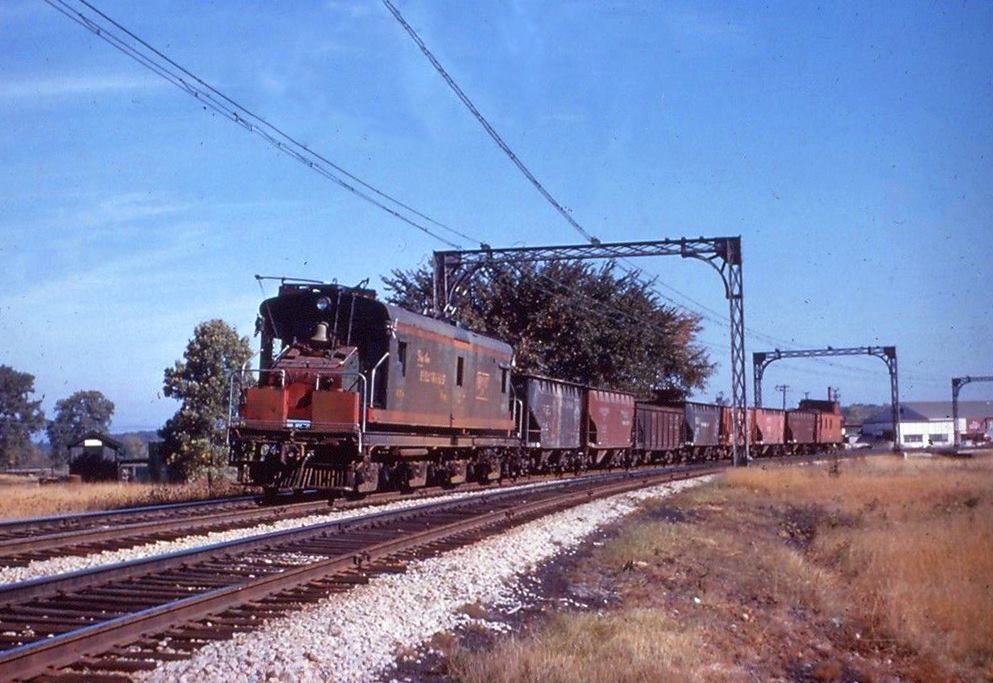 One of the "North Shore Line's" steeple-cab motors, a former Oregon Electric unit, handles freight work during a fall day during the 1950s. Today, little remains of the North Shore's once-expansive interurban network.

With the opening of the Skokie line the North Shore reached its absolute final size which consisted of 74 miles of main line, a 23-mile route between Waukegan and the Loop, and finally the 9-mile Mundelein Branch giving the interurban a system of exactly 106 miles.

Given the fact that the company operated such high speed service and was located in a highly populated region it weathered the 1920s downfall of the interurban relatively well, and initially did fine after the Great Depression hit.

However, as the depression deepened so did the North Shore Line's troubles. Even during its most profitable years it only earned slight net profits and freight traffic never made up more than 25% of its total revenue (which slowly worsened during its final years).

In 1930s the North Shore Line embarked on another vast improvement project of its property by updating equipment (by completely revamping cars and applying an attractive "Christmas" livery of green and red) and grade separating as much of its suburban lines as possible to increase train speeds and remain competitive with the standard railroads.

In some cases where the North Shore Line could not get out of street running or needed to renew its charter with a town it simply did away with rail operations and instead setup bus services, which became highly efficient and well coordinated with the trains.

In 1941 it purchased the most famous streamlined interurban equipment ever operated, two articulated trainsets that featured four cars known as Electroliners.

They became the North Shore Line's premier equipment and featured both coach service as well as tavern/lounge amenities.

They offered one way, through fares to Milwaukee or Chicago and remained in use until 1963 when they were sold to the Philadelphia Suburban Transportation Company and renamed Libery Liners (painted in a red, white, and blue scheme).

After retirement in 1979 both sets were preserved; #801-#802 eventually was acquired by the Illinois Railway Museum and #803-#804 is owned by the Rockhill Trolley Museum in Rockhill Furnace, Pennsylvania. 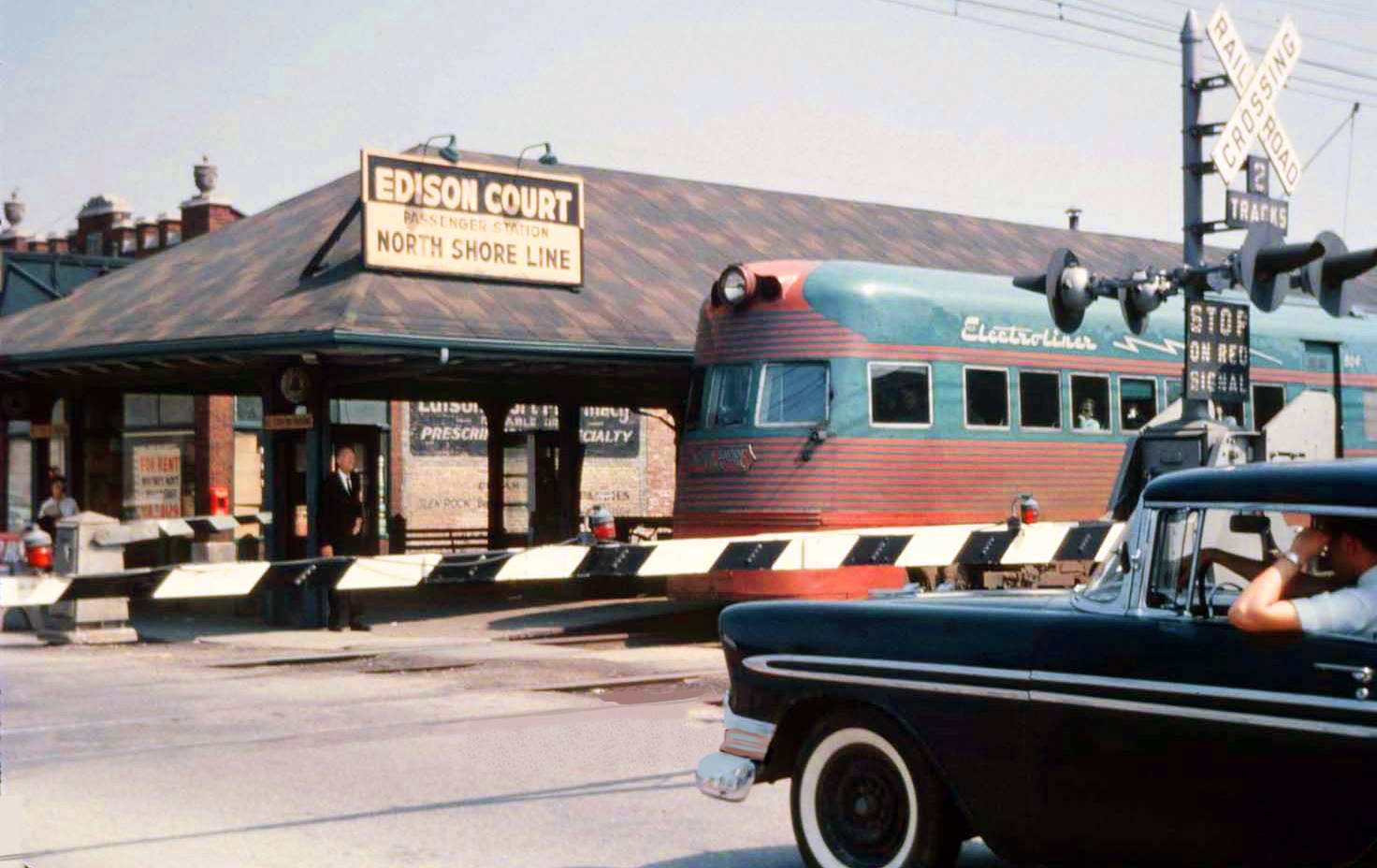 One of the North Shore Line's "Electroliner" trainsets appears to be boarding at the Edison Court Station in Chicago circa 1960.

Unfortunately, the lack of freight traffic would come to doom the Chicago, North Shore, and Milwaukee Railroad. In the early 1940s the Insull company collapsed and the North Shore Line was reorganized in 1946, with basically the same name as before.

By the late 1940s losses of passenger service and higher wage requirements were driving the system on the brink of bankruptcy once more. 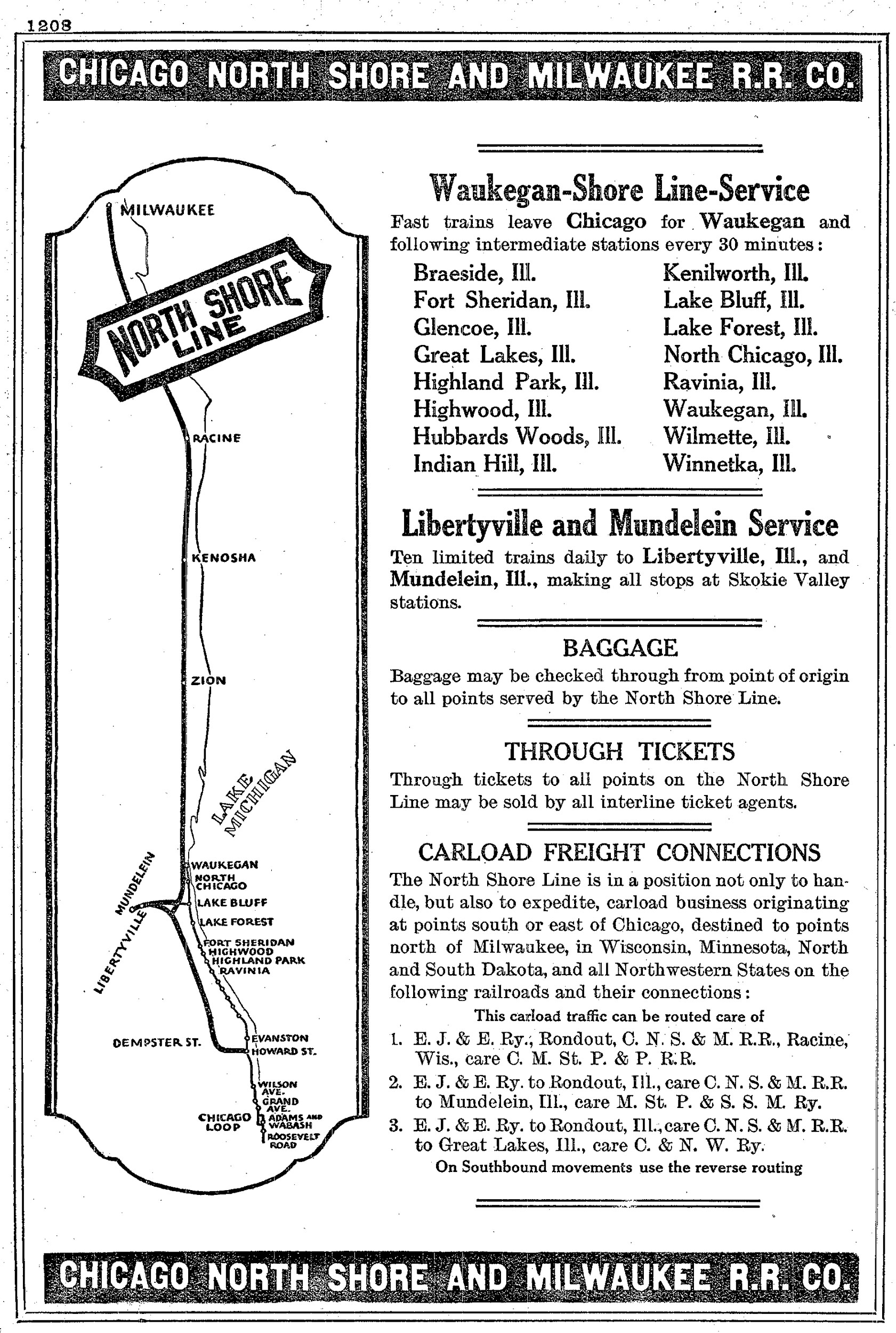 In 1955 it was finally granted permission to abandon service over the original Shore Line route, which held only low-profit short distance commuter traffic.

The completion of the Northwest Expressway that connected the Chicago Loop with the Edens Expressway in 1960 proved to be final blow for the company.

It had tried to abandon all service as early as May, 1958 but was initially denied so by the Interstate Commerce Commission.  For further reading about the North Shore please click here.

In November, 1959 its approval was finally granted but the Illinois Commerce Commission vigorously appealed.

As such, trains continued to run until early 1963 when finally on January 21 service came to an official end.

After this most of the property was sold off or abandoned although a short stretch between Dempster Street and Lake-Cook Road was sold the C&NW for continued freight use.

Interestingly, successor Union Pacific continued using the line until 2001 when it was finally ripped up.

Today, Wisconsin owns the entire right-of-way in its state and has had tentative plans for years to redevelop the property for commuter use but still has yet to do so.  For additional reading and information about the North Shore Line please click here.